There was one day remaining in the 1999 Ryder Cup at The Country Club, the picturesque golf course in Brookline, Massachusetts.

The star-studded United States team, which included Tiger Woods, David Duval, Phil Mickelson and Tom Lehman, trailed the European team, 10-6. How bad was the forecast for a comeback victory? No team in 33 previous Ryder Cups had ever erased more than a two-point deficit to win.

This one was over.

Or so it seemed. First, at the press conference the day before the final round, U.S. captain Ben Crenshaw, fighting back tears, proclaimed, "I'm going to leave y'all with one thought. I'm a big believer in fate. I have a good feeling about this."

Crenshaw immediately called a team meeting that included all 12 U.S. players and their wives and girlfriends. George W. Bush, the Texas governor at the time, was summoned, too. Crenshaw asked him to read a poem about the Alamo, when Texas' hope of independence from Mexico in 1836 appeared lost.

Crenshaw didn't stop there. He played a video of each player's career highlights that featured a personalized cheer from a cheerleader at each player's college. Crenshaw talked about how great the players were, that if they played with more heart and emotion, they'd come back and win. Every time Crenshaw alluded to the final round, he said, "When we win," not "If we win."

THE MOMENT
The sun rises on Oct. 2, 1999, and the U.S. plays brilliantly, with emotion, passion, fire -- just the way Crenshaw wants, just the way he says they would. The team chips away at the deficit until there is no longer a deficit. On the 18th hole of his pairing, all Mark O'Meara needs is to halve the hole to win the half-point that would wrap up a stunning victory for the U.S. He hooks his drive into a bunker, pulls his second shot into another bunker, makes bogey and loses the match.

At 17, it's Justin Leonard vs. Jose Maria Olazabal -- with the Ryder Cup on the line. Olazabal had bogeyed four straight holes, allowing Leonard to even the match on 15 after rolling in a 35-foot putt. Both made pars on 16. On 17, a par-4, they both reach the green in two shots. Leonard faces a 45-foot putt, Olazabal a 22-footer. Leonard has one of the world's best short games. but a 45-footer, an uphill, double-breaker for the potential Cup-clinching birdie, is simply too improbable.

Leonard's plan is to two-putt, to get close enough so he doesn't have to do anything but tap in a two-footer. He takes "dead aim," Crenshaw's favorite phrase. Leonard's putt is tracking … and tracking … and then disappears into the cup. 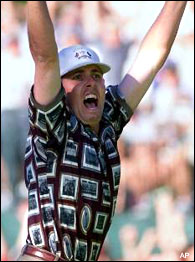 As the putt falls, a wide-eyed, exuberant Leonard raises both arms, screams "Yes! " and sprints toward the gallery. Crenshaw falls to his knees and kisses the green. There is pandemonium on the course, a scene never seen before on the links. Davis Love III, Woods and Mickelson charged out of their nervous crouches when Leonard's putt for the ages ducks its way into the hole. They piled onto each other like a baseball team after winning the World Series.

Leonard is buried under a pile of jubilant teammates, wives, caddies, friends and fans who had sprinted across the 17th green where Olazabal still had to putt. Fans shout and wave American flags. Lehman hoists Leonard into the air. Stoic David Duval, who admitted he didn't know what the big deal was with the Ryder Cup, works the crowd, cupping his ear as he circles the green, begging the American crowd to bring the noise. Mickelson grabs his wife Amy and screams, "We won!"

But the U.S. hadn't won. Olazabal still has his birdie putt to halve the hole. If he makes it, the match is still on. If he misses, Leonard goes to one up, and a half point guarantees a U.S. win and the greatest comeback ever. The commotion subsides. Olazabal takes his time. He waits for a grumbling truck to pass by. A prop plane putters overhead. He waits again. The Spaniard draws the head of his putter back and puts a good stroke on the ball. The ball tracks … and misses.

Crenshaw races toward Leonard, his face bursting with joy, and hugs Leonard so hard that it looks as if his piercing blue eyes might pop out of his head. The final score will be 14 1/2 for the U.S., 13 1/2 for the Europeans. Lehman yanks his shirt off and heaves it into the cheering crowd.

The Europeans are clearly irate over the premature celebration at No. 17 -- a display of the togetherness many thought the Americans had lacked. The Americans refuse to apologize as they make their way toward the clubhouse.

As fans cheer outside the clubhouse, the American players climb up to the balcony, serenade the fans, and begin spraying champagne on themselves and the fans below. And together, as one, they laugh, shout and chant America's newest Ryder Cup hero: "Jus-tin! Leon-ard! Jus-tin! Leon-ard!"