He created an unstoppable shot -- the sky hook. He developed it after dunking was banned in the college game by the NCAA in the 1960s -- banned specifically to neutralize him because he was so tall, so dominant.

All Kareem Abdul-Jabbar would do is take a little stride, turn his big body, take a little hop and flick the ball from far above his head. So simple.

Therefore, on the night Abdul-Jabbar was expected to became the NBA No. 1 all-time scorer, the only appropriate way to score the historic point was, of course, with . . .

THE MOMENT
April 5, 1984, the Los Angeles Lakers vs. the Utah Jazz, Abdul-Jabbar vs. The Record. The game is being played in Las Vegas, the Jazz' home away from home this season. No one is betting against Kareem.

All Abdul-Jabbar needs to snap the all-time NBA scoring record of 31,419 points, held by Wilt Chamberlain, is 22 points. The world knew this was the night the record would go down, the night the NBA would crown a new scoring king. 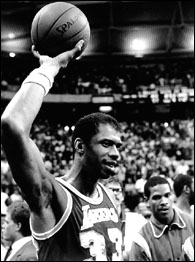 The crowd of 18,389 at the Thomas and Mack Center greets Abdul-Jabbar with a 45-second standing ovation. He responds with a double thumbs-up sign and a smile. Then he starts the game with a surge, hitting his first four shots, three dunks and a 14-foot fadeaway. He winds up scoring 12 points in the first period.

Every time Abdul-Jabbar, 37, touches the ball, the crowd buzzes with anticipation and excitement. But Kareem is his characteristic self on this night, despite the milestone in sight, often passing up shots against double-teams, slinging passes to open teammates. He finishes the first half with a thunderous dunk with five seconds left, his 15th and 16th points.

Nearly half of the third quarter passes before Abdul-Jabbar scores again, this time on a 12-foot hook on the baseline with 6:54 remaining, leaving him just four points shy. But the next two times he receives the ball, each time prompting a rising buzz from the crowd, he passes off for assists. He scores just one basket in the quarter. Lakers coach Pat Riley wants to take him out of the game, to preserve the record, to allow Kareem to break it at home in Los Angeles, in the Forum, in front of the Lakers' fans. But Kareem tells him, "No, let's get it over it." It has become a burden for him and the team.

As the game enters the fourth quarter, the Lakers have a huge lead over their inferior opponents and they begin looking specifically for Abdul-Jabbar every trip down the floor. James Worthy drives the lane and can easily score, but he dishes off instead to Abdul-Jabbar, who slams home a dunk, tying Chamberlain's scoring mark. The crowd rises in delight, anticipating that history is about to be made, right in front of their eyes.

Two minutes pass without a basket. Then, with about 10 minutes left in the contest, Kareem get the ball in the post, swings his body around and takes one of his patented sky hooks. The crowd rises, thinking this is the record breaker. But Abdul-Jabbar misses.

On the Lakers' next trip down the floor, the crowd rises again, in unison, waiting for The Moment. With 8:53 left, Abdul-Jabbar, stationed along the baseline, takes a pass from Magic Johnson. Abdul-Jabbar contemplates passing up the shot as Jazz center Mark Eaton and guard Rickey Green engulf him. But the 7-foot-2 star takes a little stride, turns his big body, skips a step and flicks the ball from far above his head, 12 feet away from the basket. The parabola falls cleanly through the net. "There it is!" yells Lakers announcer Chick Hearn.

Typically, Abdul-Jabbar is nonchalant, at least initially. This proud, introverted intellectual lets the madness, the celebration, come to him. As the crowd applauds wildly, the Lakers rush toward the NBA's new scoring leader. A swarm of photographers converge. The game stops. NBA Commissioner David Stern tells the crowd: ''NBA players are the greatest in the world. And Kareem, you are the greatest of them all.''

Cradling the game ball, Abdul-Jabbar takes the microphone and says: ''It's hard to say anything after all is said and done." He goes on to thank his parents, his family, the fans. After an extensive ovation and ceremony, Abdul-Jabbar is taken out of the game, having made 10 of 14 shots from the field and 2 of 2 from the foul line, along with five rebounds and three assists, in a 129-115 victory.

Afterwards, Abdul-Jabbar says the record-breaking shot is "nothing spectacular," just one of the many sky hooks he has nailed throughout his stellar career. "I just faked the pass and I just shot it," he would tell the media.

So simple. For one man alone.