Mary Lou Retton, a 16-year-old acrobatic gymnastic from Fairmont, W. Va., stole America's hearts as the curtain rolled up on the 1984 Summer Olympics in Los Angeles. An American gymnast -- male or female -- had never captured an Olympic gold medal. And as Retton strode into L.A. with her all-world talent and distinctive persona, the nation watched to see if she could deliver the first gold medal in U.S. gymnastics history.

THE MOMENT
It's August 3, 1984. The evening competition begins with Retton leading all 36 women in the gymnastics all-around event. Romania's Ecaterina Szabo is the closest to Retton, trailing by only .15 of a point.

On the beam, Retton has two shaky landings, one on a forward flip, the other on a back walkover. She performs her double-somersaulting dismount flawlessly, but her score is 9.80. She now trails Szabo by .15 of a point, with the floor exercise and vault remaining.

Szabo, up first throughout the four rotations, performs her first vault -- nearly flawlessly. She is awarded a 9.90. Meanwhile, Retton, flawlessly tumbling and dancing in her floor exercises, gets a 10, narrowing Szabo's lead to .050 points -- 69.225 to 69.175. 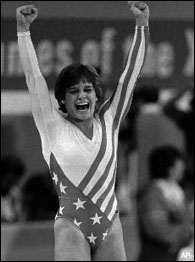 Up first again, Szabo spins like a trapeze artist on the uneven bars, but when she's awarded a 9.90 for a final total of 79.125 points, Retton knows she can swipe the gold. She knows that if she can ''stick it" for a 10 on either of her vaults, she wins by .05 of a point. She also knows that if she wobbles to a 9.95, she'd tie for the gold. And if she scores anything less, the gold turns to silver.

The only color on Retton's mind is gold. A 9.95 would not suffice. She wants it all. She's come too far to share the gold. Szabo and the world settle in to watch Retton. It's gold medal time.

Retton tells herself that she vaults her best under pressure, that it makes her fight and scrap harder. She knows that if she "sticks," she'll win. "I kept thinking 'stick, stick, stick,'" she would say later. "I knew I had to get a 10."

Behind the fence, Retton's coach, Bela Karolyi, encourages her. Before he gives her any advice about the vault on which she needs a perfect 10 to win the gold, Retton looks at him with those big eyes of hers and says, "I'm going to stick it." Karolyi breaks into a wide grin.

"Stick it" is the hottest phrase in gymnastics; it means landing so firmly and solidly that a gymnast sticks to the mat without even as much as a wobble.

Retton does not think at all about her right knee that required arthroscopic surgery for the removal of torn cartilage only two months before the L.A. Games. Rather, she thinks about the day she stretched out on the floor of the family room in 1976 after watching Nadia Comaneci of Romania win the all-around gold medal in Montreal. She remembers being enthralled. She remembers thinking, "I want that to be me."

The 9,023 fans at Pauley Pavilion are silent as Retton prepares to determine the result of the Olympic competition. To excel on the vault, a gymnast must transform herself to be part sprinter, part acrobat and part skydiver. Retton, at this moment, morphs into all three.

She stands erect, then sprints the 73 1/2 feet to the board and launches herself high into space. As she descends from midair, twisting and turning in absolute perfect form, she lands and then performs a backward somersault in a laid-out position with a full twist, 360 degrees, and lands upright and rock still. She "sticks it." It's a staggering effort, an easy "10."

"10 ... 10 ... 10," bellows the sellout crowd. Seconds later, a "10" flashes on the small electronic scoreboard near the vault. The crowd goes absolutely wild, knowing they've witnessed the first American to ever win a gold medal.

Retton leaps into the air. She holds her arms up to the heavens, smiling, waving, throwing kisses to the crowd. She has the gold medal, but she has to interrupt her celebration to comply with the rule that a gymnast must do two vaults, with the higher score prevailing. She sprints the 73 1/2 feet to the board again and lifts herself again into the air … and … she knows can't top the first score, but she wants to equal it. She leaps again, and she "sticks it" again. Another 10. The crowd goes wild, chanting "USA! USA!" and "Mary Lou! Mary Lou! Mary Lou!"