The first sign of serious trouble came near the end of the third quarter, shortly after Chargers tight end Kellen Winslow caught a 25-yard touchdown pass to give San Diego a 31-24 lead. As an exhausted Winslow walked to the sidelines, he felt his thigh cramp up. Then he felt his calf cramp up. He hobbled to the bench, ready to collapse.

Winslow wasn't the only one. The heat and humidity had turned the Orange Bowl in Miami into an outdoor sauna. This January 2, 1982, NFL playoff game between the Dolphins and Chargers is considered one of the greatest in league history. This game went on for 4 hours and 45 minutes, and left 90 players dragging their tongues across the hot turf.

The game started out as a rout. San Diego jumped out to a 24-0 lead, but the Dolphins rallied to tie it at halftime. The Chargers regained the lead in the third quarter, 31-24, on a Dan Fouts to Winslow TD. But the Dolphins come right back when quarterback Don Strock, playing for the injured David Woodley, hit reserve tight end Bruce Hardy for a 50-yard touchdown. The game was tied at 31.

THE MOMENT
The clamor in the Orange Bowl in the fourth quarter is so deafening, it sounds as if a space shuttle is about to take off. It gets even louder when Lyle Blackwood picks off a Fouts pass, setting up Tony Nathan's touchdown run that gives Miami a 38-31 lead.

After Miami forces the Chargers to punt on the next possession, Winslow is barely able to walk to the sideline. He not only has cramps in his thigh and both calves, he now has one in his lower back -- perhaps the worst spot of all to develop a cramp because it's difficult to stand and to bend over. "I felt paralyzed," he would say later on. 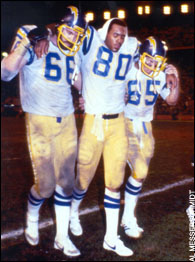 Winslow had entered the game in terrible shape to begin with; he has a bruised left shoulder, a strained right rotator cuff, and a sore neck, which he suffered while compensating for the other injuries. His condition is so bad that he required help to put on his shoulder pads before the game.

Now, here he is, having to be helped to the bench again by teammates. Team trainers surround him like a pit crew: one massages his calves, another rubs his back, and another pours fluids into his mouth. But he continues on.

With five minutes to play and Miami leading 38-31, Strock leads a scintillating, clock-eating drive that moves the Dolphins to the San Diego 21-yard line. All the Dolphins need to seal the victory is a field goal. But on second and seven, Andra Franklin takes a handoff and plunges up the middle into a wall of bodies. As he falls, the ball is ripped from his tight grip by San Diego lineman Louie Kelcher, giving San Diego possession.

The oppressive heat takes its toll on the Miami defense, which is now gasping for air and unable to provide any kind of a pass rush. This allows Fouts to put together a magnificent drive; he connects with Charlie Joiner for 14 yards, Wes Chandler for 6, Joiner for 5 and then 15 more, a dead-tired Winslow for 7, and Chandler for 19, bringing the ball to the Miami 9.

On first-and-goal, Fouts drops back, scrambles and lobs the ball toward the corner of the end zone to Winslow, who leaps but can't get high enough to snare the ball. Just as the ball sails over Winslow's outstretched fingernails, Chargers rookie running back James Brooks, who had instinctively run to the back line of the end zone behind Winslow, snags the ball for the tying touchdown with 55 seconds left. "One of the all-time brilliant heads-up plays," Fouts would later tell the media. "In the hundreds of times we'd run that play, I'd never thrown to anybody back there."

On the ensuing kickoff, Chargers coach Don Coryell calls for a squib kick, hoping the Dolphins will fumble. Fouts tries talking him out of it, wanting to bury the Dolphins deep in their own territory. Coryell goes with the squib. The Dolphins handle the ball, and start at their 40. There are 52 seconds on the clock.

Strock's first-down pass is nearly picked off. His second pass is intercepted, by Willlie Buchanon, who fumbles it right back to Miami. The Dolphins drive into field-goal range and with four seconds remaining, Uwe von Schamann -- the AFC's most accurate kicker -- runs out to attempt a 43-yard field goal.

Winslow, slumped on the bench trying to hold down liquids, slowly walks back on the field to try and block the kick. He has never blocked a field goal in his career. He can hardly stand, much less jump. Teammates try to prevent him from going on the field. He pushes them aside.

"Get me some penetration," Winslow yells to teammates. As the ball is snapped, Winslow summons everything he has left in his weak, deflated body. His 6-foot-6 body jumps as high as it can. As the ball is booted, Winslow tips the kick with the pinkie finger on his right hand. The field goal attempt is no good, forcing the game into overtime.

After his block, Winslow lays on the ground, unable to celebrate because he is unable to move. He is carried off the field, his body in spasm from his calves to his neck. Coryell approaches OT as if Winslow is unable to play, but amazingly, the Chargers' tight-end staggers back onto the field after San Diego wins the coin flip.

The Chargers rapidly move downfield and Coryell calls for Rolf Benirschke to kick a 27-yarder. Benirschke hadn't missed from inside the 30 all year. There's one problem: San Diego's field goal unit is late getting onto the field, forcing a quick snap. With his rhythm off, Benirschke hooks his kick left. And the game goes on, into the night.

Deadlocked at 38, neither team is able to sustain a drive on their two ensuing possessions. Nine minutes into overtime, Strock moves Miami downfield, setting up von Schamann for a 34-yarder. Across the field, Benirschke keels on the sideline. "It was like watching your own execution," he would say later. Amazingly, von Schamann flubs the kick. And the game goes on.

Next, Fouts drives San Diego downfield, hitting Brooks and Chandler twice in a row, and then connecting with Joiner for 39 yards. The Chargers are at the Miami 10-yard line. Fate presents Benirschke with another chance. With San Diego's field goal unit ready this time, Benirschke's kick is perfect -- ending this epic game, and silencing the exhausted, sweaty crowd of nearly 50,000.

The scoreboard flashes, San Diego 41, Miami 38. Linemen on both teams lay on the ground, motionless. As players from both teams struggle to their feet, Winslow, who caught 16 passes for 166 yards, takes three wobbly steps, then falls. His body temperature is 105 degrees. It's later revealed that he lost 13 pounds during the game. He is helped up by two teammates and staggers slowly off the field, flanked by teammates, holding him up -- an image that reflects the true essence of the game.