He remembers waking up in the middle of the night, sweating profusely, shaking, and feeling as if he was going to die. "I was scared; I didn't know what was happening to me," Michael Jordan would say.

At first, he thought it was a nightmare. Then he realized it was real, that he was seriously ill. "I felt partially paralyzed," he would later say.

When he lifted himself up from his bed in his Utah hotel room, his head began spinning. He'd never been so nauseated before. He feared that somehow, some way, someone had slipped some kind of drug in something he ate.

It was the middle of the night in Salt Lake City, an off day between Games 4 and 5. The series was tied, 2-2, following Utah's second consecutive win, but how in the world could Jordan play in this condition in Game 5?

Jordan called the Bulls' medical personnel, which came rushing to his room. They determined that he was suffering from food poisoning or an intestinal stomach virus. "There's no way you'll be able to play Game 5," Jordan was told.

Jordan remains in bed for the next 24 hours, missing the Bulls' morning practices the day before and the day of Game 5. He had lost several pounds. He was dehydrated. Then, at 3 p.m., just three hours before tip-off, Jordan rose from his hotel bed and dragged himself to the Delta Center.

THE MOMENT
It's 4:30 p.m. when Scottie Pippen sees Jordan emerge from a side door of the Delta Center. "The way he looked, there's no way I thought he could even put on his uniform," Pippen would say. "I'd never seen him like that. He looked bad -- I mean really bad."

Jordan sequesters himself in a dark room adjacent to the Bulls' locker room. He slowly lies his weak body down. He closes his eyes. He visualizes himself running, shooting, passing, rebounding, dunking. Soon, he emerges from the room, staggering slowly. He puts on his uniform and walks out to the court, weak and pale. "I can play," he tells coach Phil Jackson. "I'll let you know how I'm feeling as the game goes on."

As the game begins, Jordan drags himself up and down the court, running at only 65 percent of his normal speed. He is so dehydrated and fatigued that he is sure he is going to pass out any second. Halfway through the quarter, during a pause in the game, Jordan bends over to rest, pulls on his shorts, closes his eyes and nearly falls over. He has no energy whatsoever.

Later in the first quarter, during a timeout, Jordan slumps into a seat on the Bulls' bench, his arms dangling, his shoulders sagging. "He could hardly sit up," Chicago center Luc Longley would say. 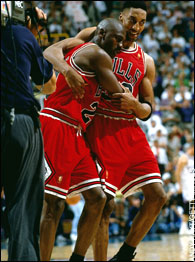 He is essentially useless in the first quarter, but in the second quarter, after Utah takes a 16-point lead, something happens to Jordan physically, emotionally and mentally. He begins running harder, running faster and making shots. Somehow, miraculously, he begins looking like the typically dominant Michael Jordan. He scores 17 points in the quarter. "It was all about desire," he would tell the media. "Somehow I found the energy to stay strong."

At halftime, Jordan is fed fluids and given cold towels. In the third quarter, fatigue and nausea return, dragging him down again, rendering him virtually useless. But early in the fourth quarter, when the Jazz go up, 77-69, Jordan somehow turns it on again, leading a 10-0 run that puts Chicago back on top with five minutes left.

He starts the Bulls' burst with a 12-footer, then Toni Kukoc and Jordan both drill 3-pointers to tie the score at 77. MJ caps the run by putting the Bulls on top, 79-77, with an 18-footer over Bryon Russell. Jordan had 33 points at that stage, a staggering total for someone so ill and weak.

"In the third quarter, I felt like I couldn't catch my wind and get my energy level up," Jordan would say later. "I don't know how I got through the fourth quarter. I was just trying to gut myself through it."

With 3:07 left, John Stockton nails a three for an 84-81 Utah lead. Jordan quickly hits a runner in the lane to make it 84-83. Moments later, Jordan is fouled by Stockton. He makes the first free throw to tie the score at 85 with 46.5 seconds left, but misses the second. Kukoc, however, tips the miss, and Jordan, his instincts still amazingly sharp and his reactions still quick despite his flu-like symptoms, grabs the loose ball and sets up the offense again.

Clearly exhausted, clearly weak, Jordan looks for Pippen posting up Jeff Hornacek. MJ also looks for three-point specialist Steve Kerr, wide open in the corner. Jordan, his arms hanging like a piece of rope, makes a weak fake to Kerr, but then quickly fires a pass to Pippen. Russell quickly moves to double Pippen, 5 for 17 in the game, leaving Jordan open on the perimeter. Pippen quickly fires the ball back to Jordan. The clock shows 0:26. With Stockton's hand right in his face, Jordan launches a shot from beyond the three-point line. The ball hits nothing but string. Bulls, 88-85. His 15th point of the quarter and his 38th of the night. "We never want to double off Michael Jordan in that situation," Utah coach Jerry Sloan would say later.

Utah pushes the ball upcourt, and Stockton breaks down the defense and feeds Greg Ostertag for a dunk, making it 88-87 with 15.2 seconds left. The Bulls quickly inbound the ball and work the ball upcourt to Kukoc, who feeds Longley for a dunk and a 90-87 lead with 6.2 seconds remaining. One possession remains. Utah works the ball around and as the clock hits 0:01, Hornacek heaves a 3-pointer … and misses.

"That was probably the most difficult thing I've ever done," he would say after the game. "I almost played myself into passing out just to win a basketball game. If we had lost, I would have been devastated."

Jackson was almost at a loss for words, but finally told the media, "Because of the circumstances, with this being a critical game in the Finals, I'd have to say this is the greatest game I've seen Michael play. Just standing up was nauseating for him and caused him dizzy spells. This was a heroic effort, one to add to the collection of efforts that make up his legend."

After MJ's epic performance, Pippen would say, "He's the greatest, and everyone saw why tonight."