He played 21 seasons for one team in one city. He was easily one of the greatest hockey players of all time. The ultimate teammate, consummate employee and team leader, the ideal family man, a gem of the community.

Yet there was one component missing in Ray Bourque's career and life: a Stanley Cup.

His team, the Boston Bruins, respected him enough that they couldn't bear the thought of Bourque ending his career without experiencing the elation of winning a Stanley Cup.

Twenty-one seasons with the Bruins began with the hope and dream of reaching the ultimate quest; two actually ending in the Stanley Cup Finals; but none ended in victory. "There were many times," he once said, "when I felt it just wasn't going to happen for me, that I was never going to experience the greatest feeling a hockey player can achieve."

So Bruins management did the unthinkable: knowing the Bruins did not have a legitimate chance to win it all in Bourque's 21st season, they traded him, less than a month before the playoffs, to the Colorado Avalanche.

They reached the Western Conference finals, but lost Game 7 to the Dallas Stars. "I was beginning to wonder, 'Am I cursed or something?'" he told the press.

The Avs stormed out of the gate for the 2000-01 season, cruised through the season and the early playoff rounds, right into the Stanley Cup Finals against the New Jersey Devils. The Avs fell behind in the series, 3 games to 2, and faced elimination in New Jersey, but they battled to win and send the series back to Denver for Game 7. When the Avs built a 3-1 lead in the third period, it became quite clear that the moment had arrived for Bourque, that his story was actually going to have a storybook conclusion.

THE MOMENT
Thirty seconds remain in Game 7. Bourque is on the ice, lining up for what will be the game's - and the season's - final faceoff. The seconds tick away, one after another, and Bourque becomes numb.

"I couldn't breathe," he would say. It wasn't because he is tired. "It was just too much to take. I was trying to hold off the tears and contain my emotions." He feels like his body and mind are going to explode. It is all too much for his emotions, his psyche to handle.

He is so ecstatic that his tears come uncontrollably as the clock ticks down to 0:00 and the celebration begins. As NHL commissioner Gary Bettman presents the Cup to Avalanche captain Joe Sakic at center ice, Sakic illustrates the enormous respect everyone has for Bourque by immediately handing the Cup right to Bourque without even taking the traditional captain's spin around the rink.

"I told him on the ice that as soon as I got it, I was going to pass it over to him," Sakic said afterwards. "He's the one that deserved to lift it up first." 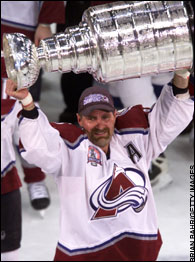 Even the Devils are moved by the emotion of the celebration. Petr Sykora weeps as Bourque, glowing like a bright star, is hoisted onto the shoulders of teammates Dave Reid and Adam Foote, and then is handed the Cup.

As he raises the Cup over his head, the weight of 22 years of expectations and broken dreams is supplanted by 34 1/2 pounds of sterling silver.

The final numbers for Bourque's celebrated career are staggering, but the one that clearly illustrates how great of a player he was is this: his 1,169 assists when he retired were the second-highest total in history. Only one player had more: Wayne Gretzky.

"What's amazing is that a lot of people who claim to know so much about the league really don't realize how great of a player Ray Bourque was and how he made others around him better and how he influenced games," Sakic told the media.

When the conversation begins about the NHL's greatest defenseman of all time, the name of Bobby Orr, another Bruin, comes up most often, a player who truly revolutionized the game with his speed, magical puck handling, and shooting accuracy. Many mention Denis Potvin.

He may have waited 22 seasons to win a Stanley Cup, but his playoff performances certainly enabled the Bruins (for at least 20 seasons) to be in position to win the Cup. He broke into the NHL in 1979, the same year Larry Bird debuted with the Celtics, in the same arena. The Bruins made it to two Stanley Cup Finals and five conference championships, and made the playoffs in every single one of Bourque's seasons but one ---1999-2000, which led to his trade that season.

As soon as Bourque took the ice for Colorado, both the player and the team were rejuvenated. "We had new life," Sakic said that night. So did Bourque. The Avs went 12-2-1 after the trade, won the Northwest Division and advanced to the conference finals before losing to Dallas in seven games. Bourque was in position to become an unrestricted free agent, but he wanted to stay with the Avs, knowing they gave up so much for him and was brought in so he'd fulfill his quest to win a Cup. He signed a one-year deal. Several months later, he was hoisting the Stanley Cup, his dream fulfilled.