Her voice reverberated in his mind as he skated to the starting line for the biggest race of his life -- the 500-meter Olympic competition in the 1988 Winter Games in Calgary.

"I love you too," Jane Jansen Beres whispered to her brother Dan Jansen in one of the last breaths she took. She was suffering from leukemia. She could barely raise her head from the bed she was lying in. She could barely speak.

In just a few hours, Jansen, a world champion speed skater, would head to the starting blocks with the heaviest of hearts. When Jansen hung up the phone, he knew it would be the last time he heard his sister's voice.

Several thousand miles away, in Milwaukee, Jansen's brother Mike, sitting bedside with his cancer-stricken sibling, gave her a kiss on her forehead. A kiss goodbye. "This is from Dan," he told her. She closed her eyes. They would not open again.

Two time zones away, Dan Jansen lied in his bed, thinking about all the wonderful moments he had spent with his older sister. There are 11 Jansen kids. Dan and Jane were the closest. He desperately wanted to be with his sister, not in Calgary, trying to live up to everyone's expectations, trying to capture a gold medal. But he did what his sister wanted him to do -- skate. Skate the race of his life. Skate for the gold.

THE MOMENT
When Jansen slowly glides into the starting block, only seven hours after his sister passed away, he begins hearing the voice, soft, sweet and kind. Lining up against Japan's Yasushi Kuroiwa, Jansen taps his skates lightly on the vanilla face of the spectacular Olympic Oval, adjusts the hood on his sleek aqua and red racing suit and takes a deep breath. His body is there. Not his mind. Or his heart.

But he realizes this is not what Jane would want. He shakes himself, regains his senses, and begins to focus. Time to go for the gold. For Jane.

Jane was a former speed skater too, but there was nothing she loved more than watching her younger brother skate. He was the gifted one. The best of the 11 kids. 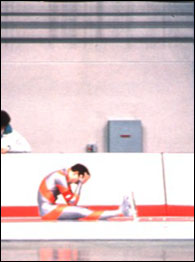 Jane's leukemia was detected the year before, in January 1987. Doctors said she needed a bone marrow transplant. Dan wanted to be the one. But he was suffering from mononucleosis. The doctors rejected him. Their sister Joanne wound up providing the bone marrow.

The transplant didn't take. Jane's condition spiraled. When Dan won three gold medals at the World Championships, held in Milwaukee just two weeks before the Olympic Games, Jane smiled proudly. She felt warm inside. Her brother would soon be going for the Olympic gold.

The gun sounds in Calgary and the skaters break out for the first leg. But it's ruled a false start. The skaters are called back and must begin again. Jansen lines up and boom -- he busts out of the block like a blur, a ball of thunder.

He soars toward the first turn and … and … suddenly, shockingly, he loses his balance. He slips. Then falls. And then skids violently into an outer padded wall, a heartbusting scene of agony. As he lay against the wall, a crumbled figure, his thoughts immediately turn to his sister. This is one of the saddest Olympic moments, considering the circumstances, considering Jansen's plight, considering the death of his sister, only hours earlier.

He rises slowly from the ice and begins skating toward the side of the oval. He buries his face in his hands.