A Revolutionary Reign
Bud Selig's tenure as baseball commissioner was initially marked by controversy: the 1994 strike that canceled the World Series, the steroid era, the All-Star Game tie. But the balance of his 22-year term featured unprecedented popularity, prosperity and labor peace for his sport. A look at the moments that defined Selig's legacy.
Photograph by Getty Images
LABOR PEACE IN OUR TIME
In 1904, John McGraw, manager of the National League champion New York Giants, refused to play the American League champion in what would have been the second World Series, declaring that his team was the champion of the "only real major league." For 90 years thereafter, the World Series continued unimpeded, including through two World Wars, until Bud Selig canceled the 1994 Series on Sept. 14 because of an ongoing players' strike over the owners' demands for a salary cap. It was the darkest moment of Selig's long tenure, America's national pastime unfathomably idle in October. The strike was finally settled, after 232 days and 948 games lost, the following spring -- without a salary cap and after the owners tried to use replacement players. Since then, the game has enjoyed an unprecedented 20 years of labor peace that will extend at least until 2016. Was it worth cancelling a World Series to achieve that harmony? Ask the Montreal Expos. -- David Schoenfield

LET THE GAMES (BETWEEN LEAGUES) BEGIN
It once seemed unimaginable: The Cardinals playing the Red Sox in June? The White Sox heading north to Wrigley for a midseason scuffle with the Cubs? The Yankees rolling into Queens to take on the Mets for a modern-day, regular-season Subway Series? This was baseball science fiction 20 years ago. Now it's such an ingrained part of the season that there's an interleague game almost every day. Some still argue that interleague play -- which kicked off with a Giants-Rangers tilt on June 12, 1997 -- has tarnished the All-Star Game and taken the romance out of the World Series. There might be some truth in that. But interleague matchups have also packed plenty of parks and revved TV ratings. Interleague play wasn't Selig's brainchild; it had been broached as far back as 1935. But give him credit for recognizing that it was an idea whose time had come. -- Jayson Stark
PHOTO BY AP Photo/David Goldman

A BALLPARK BUILDING BOOM
Selig didn't start the retro-ballpark movement -- Camden Yards opened five months before he became acting commissioner in 1992 -- but he played a significant role in pressuring communities into funding most of the 19 ultra-expensive stadiums that replaced older parks during his term. Whether you see this as entirely positive (good-bye Veterans Stadium!) or slightly negative (so long, Tiger Stadium?) depends on whether you believe billionaire owners really need taxpayer subsidies. There is no question, however, that the new ballparks are beautiful and have added to the game-day experience. In addition to watching Buster Posey or Andrew McCutchen, fans now can take in the sight of kayakers in McCovey Cove or the gorgeous backdrop of the Roberto Clemente Bridge. More comfortable seats, awesome views and best of all, virtually no artificial turf! And is there anyone who misses the concrete Kingdome? -- Jim Caple
PHOTO BY Charles LeClaire/USA TODAY Sports

MLB STARTS TAKING ATTENDANCE
The purists and the old-timers claim that the Golden Age of baseball was the 1950s and the '60s. But the true Golden Age is now. In 2014, 73,739,622 fans visited major league ballparks. That's an average of 30,458 people per game, or nearly 75 percent of capacity. In 1990, before Selig became the commissioner, the average major league game was played to 55 percent capacity. The increase is, in part, thanks to the 22 ballparks built since 1989. Many of those new fields feature either that old-time feel, all the modern amenities or both. "Not every fan comes to a baseball game to watch all nine innings,'' said Stan Kasten, then the president of the Atlanta Braves, soon after Turner Field opened in 2001. "So we will give them something else to do at the ballpark.'' As the voice told Ray Kinsella in "Field of Dreams": If you build it, they will come. -- Tim Kurkjian
PHOTO BY Mitchell Layton/Getty Images 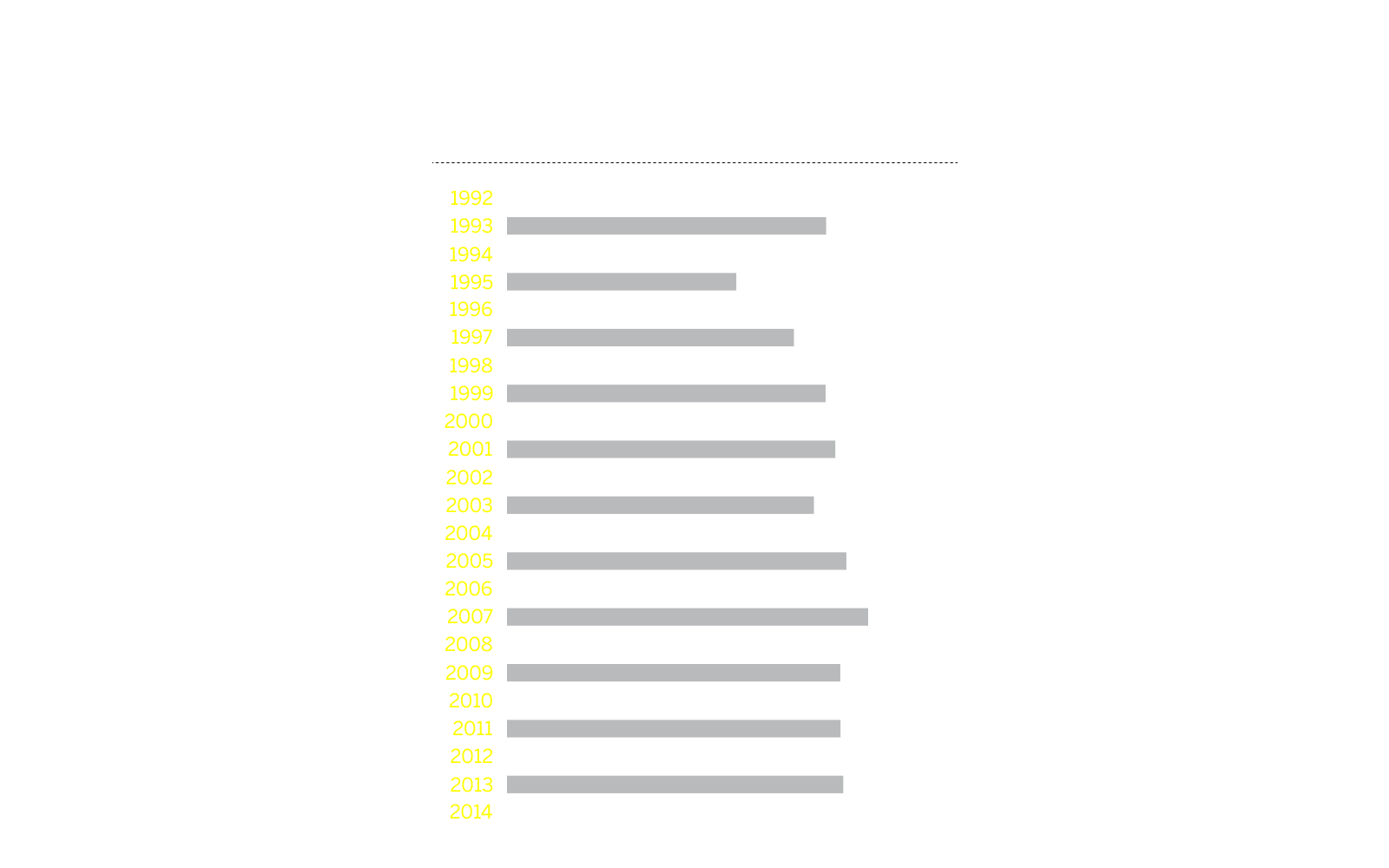 FIT TO BE TIED IN MILWAUKEE
It might be the defining image of the entire Selig administration: the commissioner shrugging helplessly as he learns that the 2002 All-Star Game, in his beloved hometown of Milwaukee, will end, shamefully, in a tie because both teams had run out of available pitchers. The commish has long denied that that 2002 embarrassment led directly to the decision, the very next season, to let the All-Star Game decide home-field advantage in the World Series. But it was, at the very least, the final straw. What really drove Selig over the edge was not so much the tie, but his frustration that the game had come to be managed and played as if it were meaningless. Well, it wasn't meaningless to Selig (or his TV partners). And the result, like it or not, was the "This Time It Counts" era of All-Star festivities. And it looks like that era is here to stay, with or without Bud. -- J.S.
PHOTO BY Andy Lyons/Getty Images

A WORLD OF OPPORTUNITY
Baseball has expanded its reach greatly since 1992, adding major leaguers from Japan, South Korea, China, Australia, Italy, Germany and Brazil in addition to the ever-expanding pipeline from Latin American countries. Foreign players had dotted rosters before Selig took over -- Australia's Craig Shipley played for the Dodgers in 1986 -- but their presence increased dramatically during his term. MLB International is growing the sport all over the world through programs in Europe and on other continents, while the quadrennial World Baseball Classic has become hugely popular overseas since its start in 2006. Season openers, once traditionally held in Cincinnati, have been played in Tokyo and Sydney, with talk of a first pitch in Europe on the horizon. It's only a matter of time before we see a sequel to "Million Dollar Arm" in which players from India actually pitch in the World Series rather than just camp out in Jon Hamm's apartment. -- J.C.
PHOTO BY AP Photo/Jeff Chiu

MINDING HIS BUSINESS
It's hard for some of us to reconcile that a game many fans view as relaxing, revitalizing and romantic is, at its core, a business. Yet under Selig, Major League Baseball became big, big business. Sometimes overlooked in the talk about escalating salaries within the sport is its massive overall growth. In 1995, MLB's gross revenues totaled $1.8 billion. In 2014, they rose to a staggering $9 billion. And from 2013 to 2014 alone, revenues spiked another 13 percent. Much of this prosperity is thanks to rising television rates and ratings, not just on the national level, but the local level too. More people are watching the games than ever before, and that's good for business. -- T.K.
PHOTO BY Steve Mitchell/USA TODAY Sports 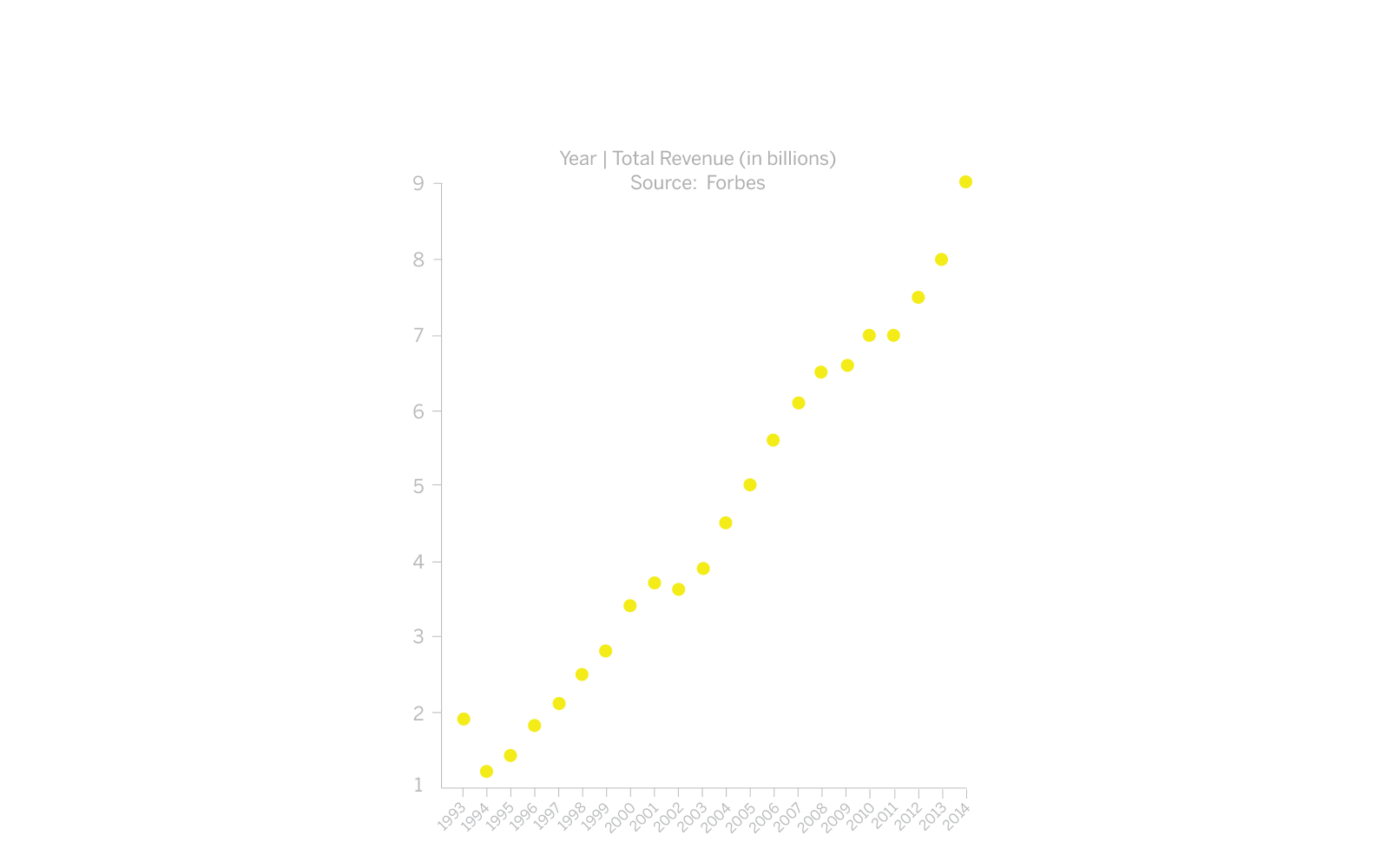 EXPANDING ITS HORIZONS
Under Selig, baseball expanded twice -- first in 1993 to Denver and Miami (the cities were selected before he took office) -- and then again in 1998, to Arizona and Tampa Bay. The sport had been at 26 teams since the 1977 expansion to Toronto and Seattle and brought major league baseball to growing population bases and new geographic areas. All four additions have had some level of on-field success: The Marlins won a World Series in 1997 and another in 2003, and the Diamondbacks were an instant on-field success, winning it all in 2001. Both the Rockies and Rays have played in a World Series, and the latter have been consistent playoff contenders since 2008. But Tampa -- a city to which several franchises had threatened to decamp over the years -- has never built a fan base despite that success, and the Marlins have struggled at the gate as well. There are no plans for a future expansion, with the new commissioner left to first resolve stadium issues in Tampa and Oakland. -- D.S.
PHOTO BY Mike Ehrmann/Getty Images

LAST SWING IN MONTREAL
From 1953 to 1972, major league franchises moved 10 times, including two teams that relocated to Selig's hometown of Milwaukee. (He was responsible for buying and moving the Seattle Pilots there in 1970.) For the next three decades, teams stayed put, though clubs such as the Giants, Twins and Mariners still threatened to move. Owners voted almost unanimously in 2001 to eliminate two of the league's 30 teams because franchises were losing money and they were ready to downsize. The likely candidates were the Expos and Twins. Minnesota ultimately held on to its Twins, but Montreal eventually lost its Expos when Selig oversaw MLB's purchase of the team and subsequent relocation to Washington, D.C. Now there's talk of the Rays, frustrated over unsuccessful attempts to get a new stadium in Tampa Bay, leaving Florida for ... Montreal? But that's something for new commissioner Rob Manfred to fret over. -- J.C.
PHOTO BY Charles Laberge/Getty Images

PLAY IT AGAIN, BUD
While Selig had brought some revolutionary changes to the game, he remained old-school for much of his term in his opposition to instant replay. Baseball became the last of the four major pro sports leagues to add instant replay when umpires began reviewing home runs late in the 2008 season. "I believe that the extraordinary technology that we now have merits the use of instant replay on a very limited basis," Selig said at the time. That "limited basis" has been expanded since then, including a major overhaul before the 2014 season that included the managerial challenge system and reviews of plays at home plate as a result of the new rules on home-plate collisions. If only there had been replay back in 1996. Then Jeffrey Maier wouldn't have been a factor, and maybe the Yankees dynasty would have been thwarted before it even began. -- D.S.
PHOTO BY Charles LeClaire/USA TODAY Sports

WILD-CARD DRAW
Think how different October baseball was when Selig took over. Back then, a "wild card" was still a poker term. And a second-place, regular-season finish didn't even earn a team a lovely parting gift, let alone a World Series trophy. Not even if it was a second-place team that won 103 games, like the 1993 Giants. So adding the wild card to baseball wasn't just a revolutionary idea. It was flat-out sacrilegious. But Selig didn't say "No way" when the wild-card brainstorm was dropped on his desk, even though he knew the traditional thinkers out there weren't happy about it. So the "Division Series" was born in 1995. By 1997, wild cards would be playing in, and winning, the World Series. And baseball was better for it. Sixteen different teams have reached the World Series since 2000 alone. Nowadays, the LDS just feels like a normal part of the October landscape. But now we know it was maybe the most important on-field innovation of Selig's entire tenure. -- J.S.
PHOTO BY Peter G. Aiken/USA TODAY Sports 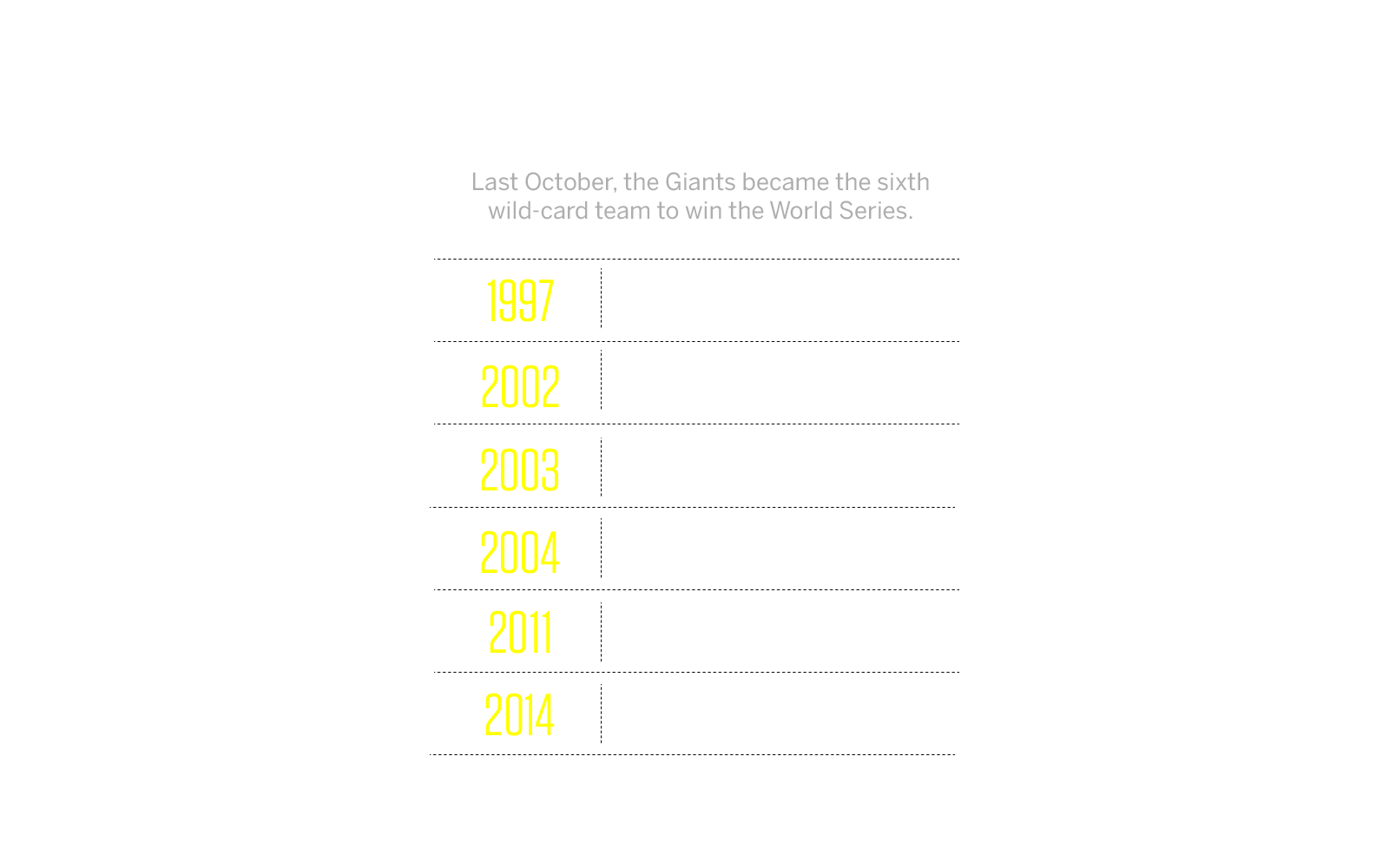 MOVING THE NEEDLE ON PEDs
The PED era hangs over Selig's long reign as commissioner like Watergate did Nixon. The offensive explosion that started in 1993 lasted for more than a decade. It was initially applauded and cheered, especially during the Great Home Run Race of 1998, and essentially ignored until Barry Bonds and the BALCO investigation. Selig initially turned a blind eye to the PED issue; but, to be fair, so did everyone in the game -- owners, management, writers and even players, as few had the courage to speak up in protest. Selig's account of history has been contradictory. In 2005, he said he'd never heard of steroids until 1998 or 1999. In 2006, he testified before Congress that "In 1994, before anybody was really talking about steroids in baseball, we proposed a program of testing for such substances ..." and that in 1998 he "began formulating a strategic plan to eliminate the use" of PEDs. Hmm. Baseball began anonymous testing in 2003, ramped up punishment and strengthened testing in 2006 after the congressional hearings and Mitchell report investigation in 2006, and later began testing for amphetamines. The testing program that was once ridiculed is now considered the toughest in major pro sports. The long-term damage? As noted, attendance and revenues continued to grow. But Bonds hasn't been elected to the Hall of Fame. -- D.S.
PHOTO BY AP Photo/Win McNamee