an Francisco is home to Silicon Valley, the Golden Gate Bridge and obscene rental costs. It's also where more than 7,500 people without homes seek shelter and survival.

The program builds sports teams that reach the least-served communities in 16 U.S. cities and seeks to engage low-income youth and young adults who are homeless by using sports as a way to empower them to lead independent lives.

Isabella Black, 23, is one of Street Soccer USA's participants in San Francisco. She plays in its coed league, which holds practices twice a week and plays games once a week. Her team's name is "Change," and the coaches act as case managers, helping the players reach goals off the field.

Each week, when Black and her teammates take the field for a game or practice, they're not just developing soccer skills, they're focusing on a theme, such as "playing with heart" or "taking the space."

The most important theme, Black says, is showing up.

"This is a soccer program focused on accomplishments off the field," says the organization's CEO and founder, Lawrence Cann. "This is not a homeless soccer program."

Cann, 37, lost his home in a fire when he was 9 years old, and his family found support through a network of friends. The young people Cann works with, however, are not always so lucky. "Kids on the streets are seen as problems and outsiders, but really they're just scared," he says.

Black bounced around until moving to San Francisco in spring 2014. She met Anderson at the Larkin Street Youth Services shelter she frequented before landing housing in a single-room occupancy building in the Castro District, which has a large queer community. "Ben visited every Tuesday and would ask, 'Who wants to play soccer?' " she says.

Not identifying as an athlete, Black was originally hesitant. "I wasn't a great sports person."

She came around and joined her first team as a goalkeeper in May 2014. She then moved to striker, wanting to score goals. In both positions, Black learned an important lesson: "I actually did something and was productive to the team, just like when I was goalie."

"Soccer is teaching me to be flexible, to help others as well as myself," Black adds.

This photo project was supported in part by TheDocumentaryProjectFund and by the journalism nonprofit Economic Hardship Reporting Project. 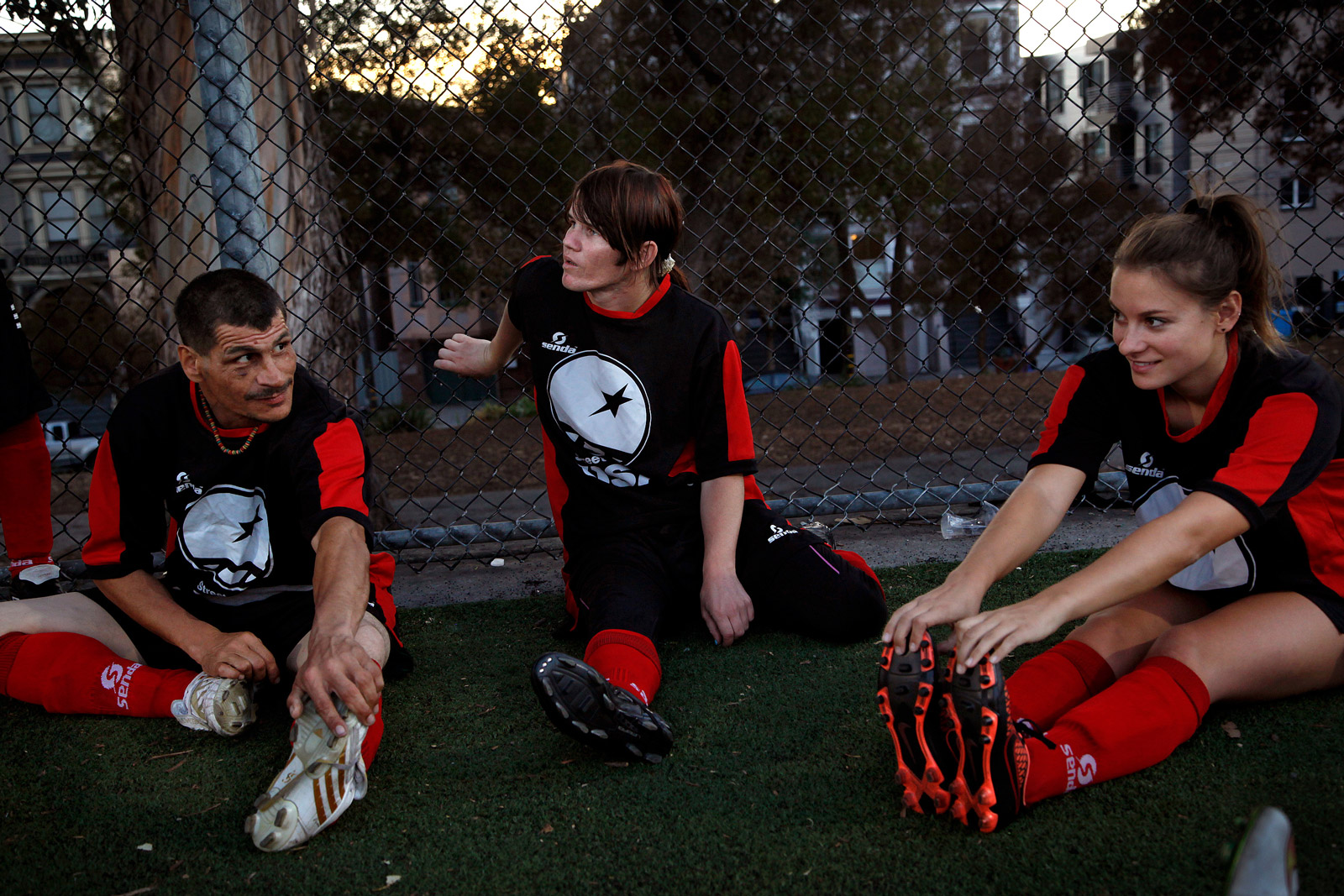 Black, center, stretches with teammate Alfred "Al" DeGroat and coach Abby Pennington before a game in San Francisco on Sept. 24. Street Soccer USA serves "emerging adults" or "transitional-aged youth," ages 18 to 30, focusing on those who are homeless. 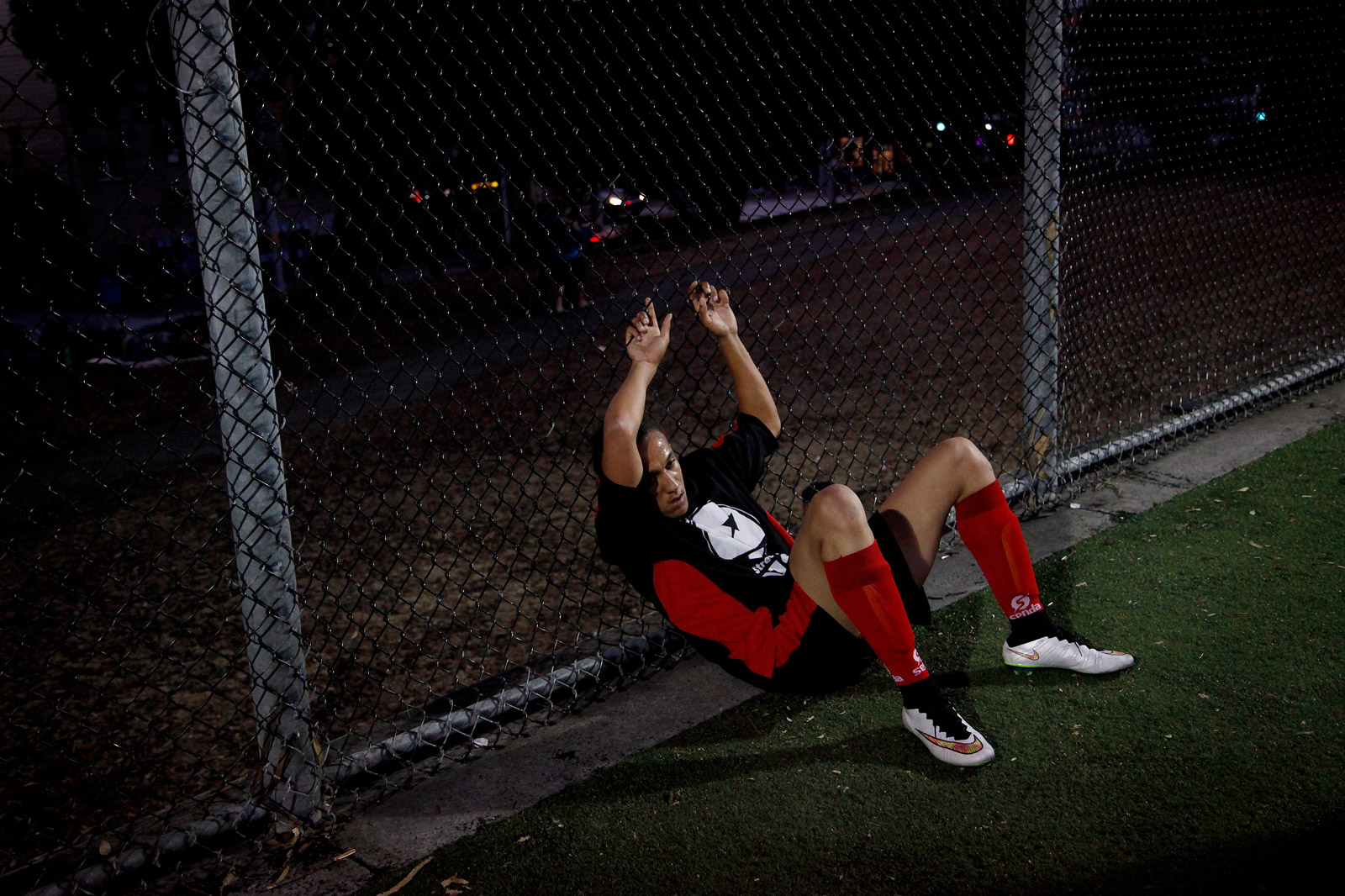 Shtaïn Gbalanga, 20, catches his breath on the sideline Sept. 24 during a game. Gbalanga, a new player to the team, became homeless a few months earlier. He was born in France, moved to San Francisco four years ago and is staying in a shelter while one of the coaches helps him sort out immigration issues. "It's a bit difficult to be self-sufficient without a Social Security number," he says. 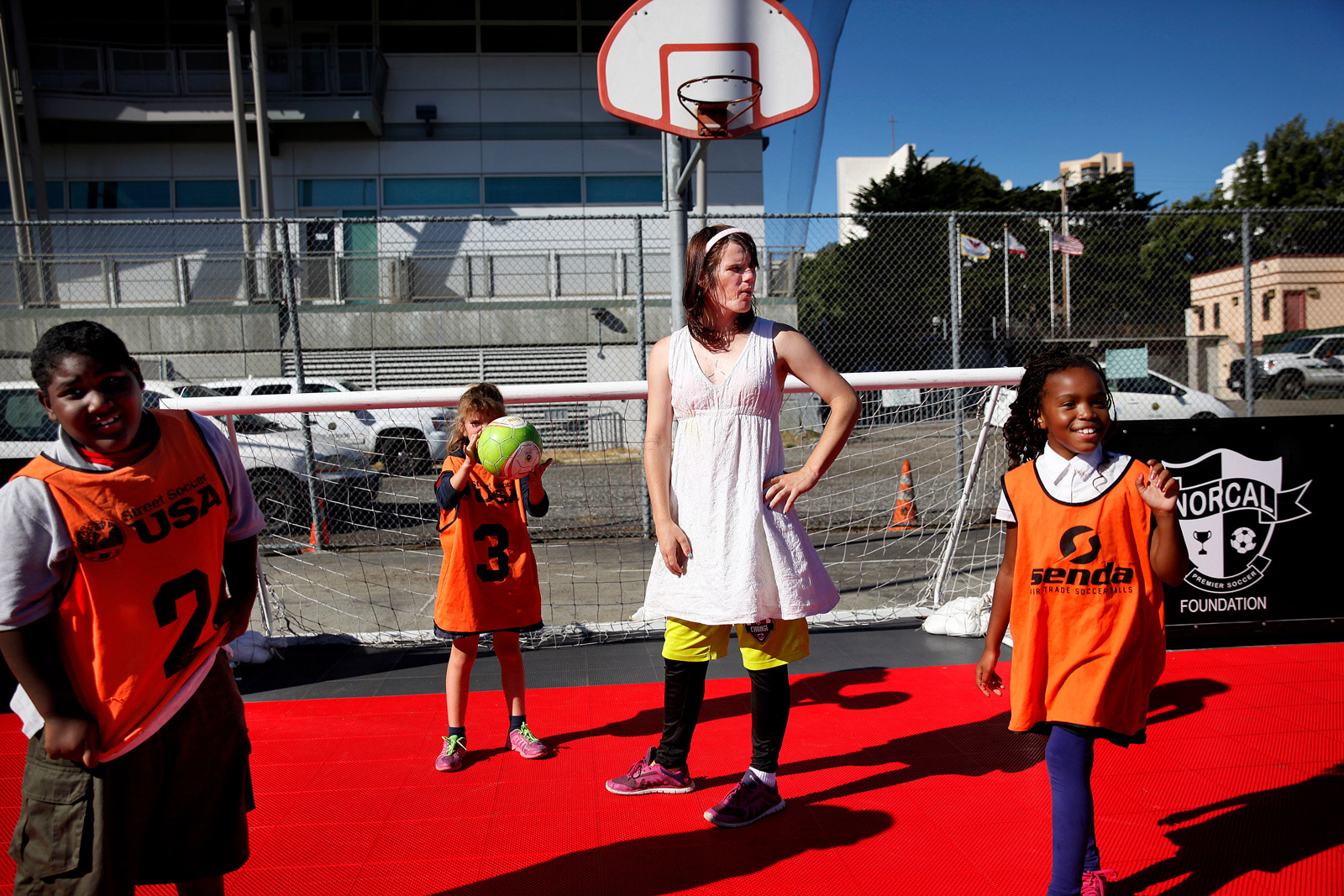 In addition to playing, Black volunteers for Street Soccer USA's after-school program, which serves youth from low-income families, as well as those who might be homeless. The organization serves more kids than it does adults. Black keeps an eye on things during a youth session on Oct. 1. 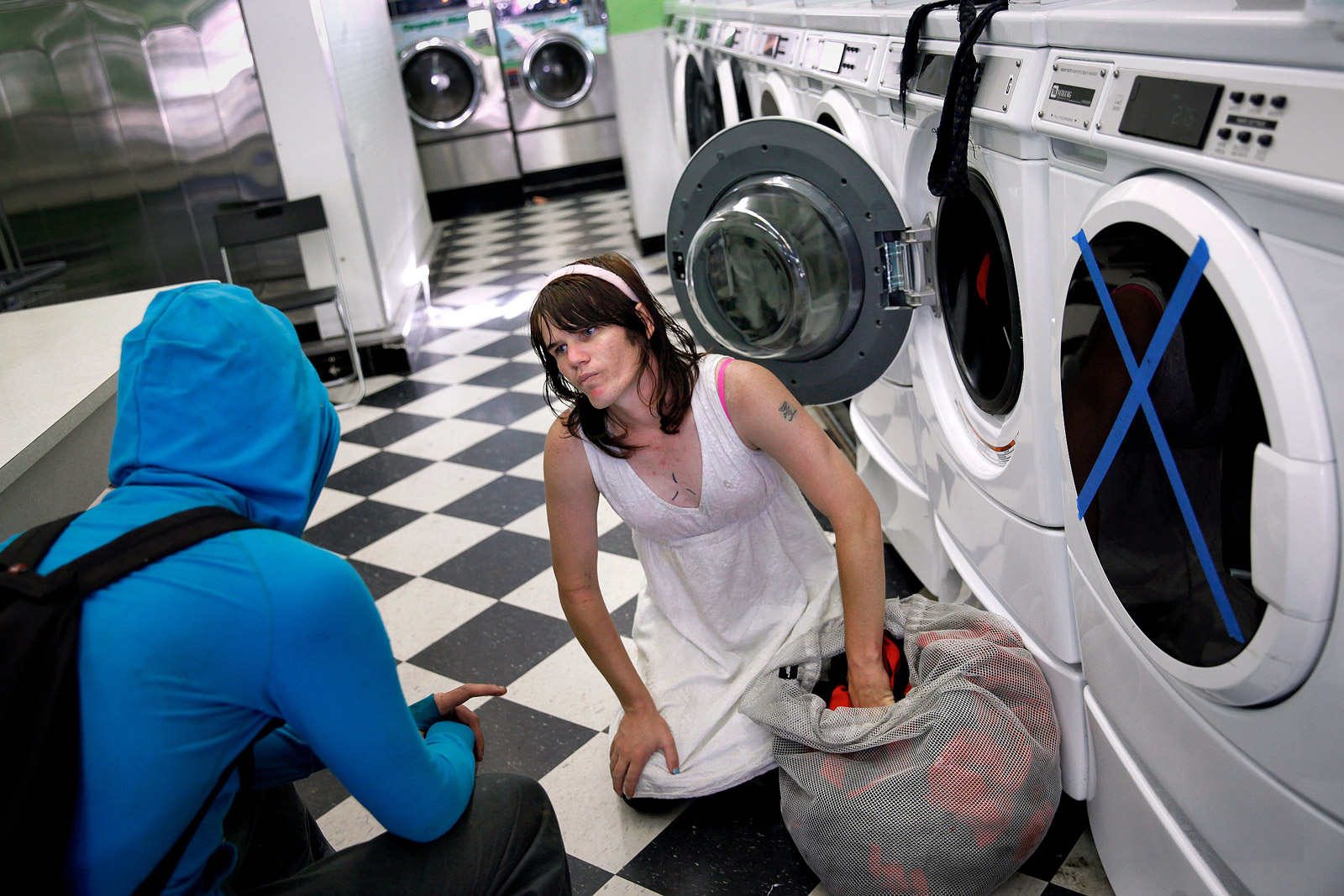 When working for the program, which includes doing her team's laundry, Black gets paid $14 an hour. She works three hours per week. She recently paid for a night in a motel for a trans friend, whom she meets at the laundromat Oct. 1, so the friend could take a shower and have a break from the streets. "I was taught to never let someone go without," she says. 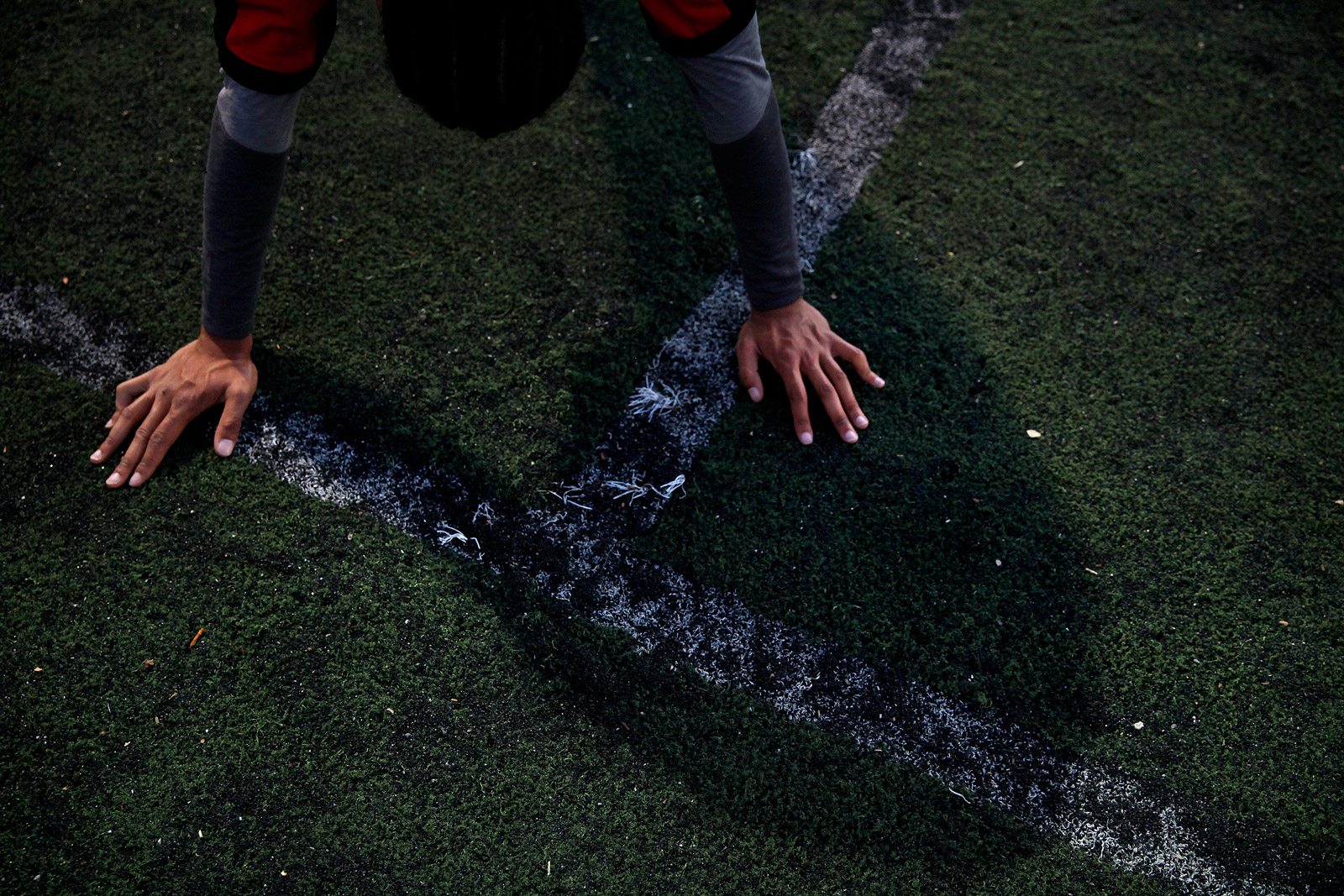 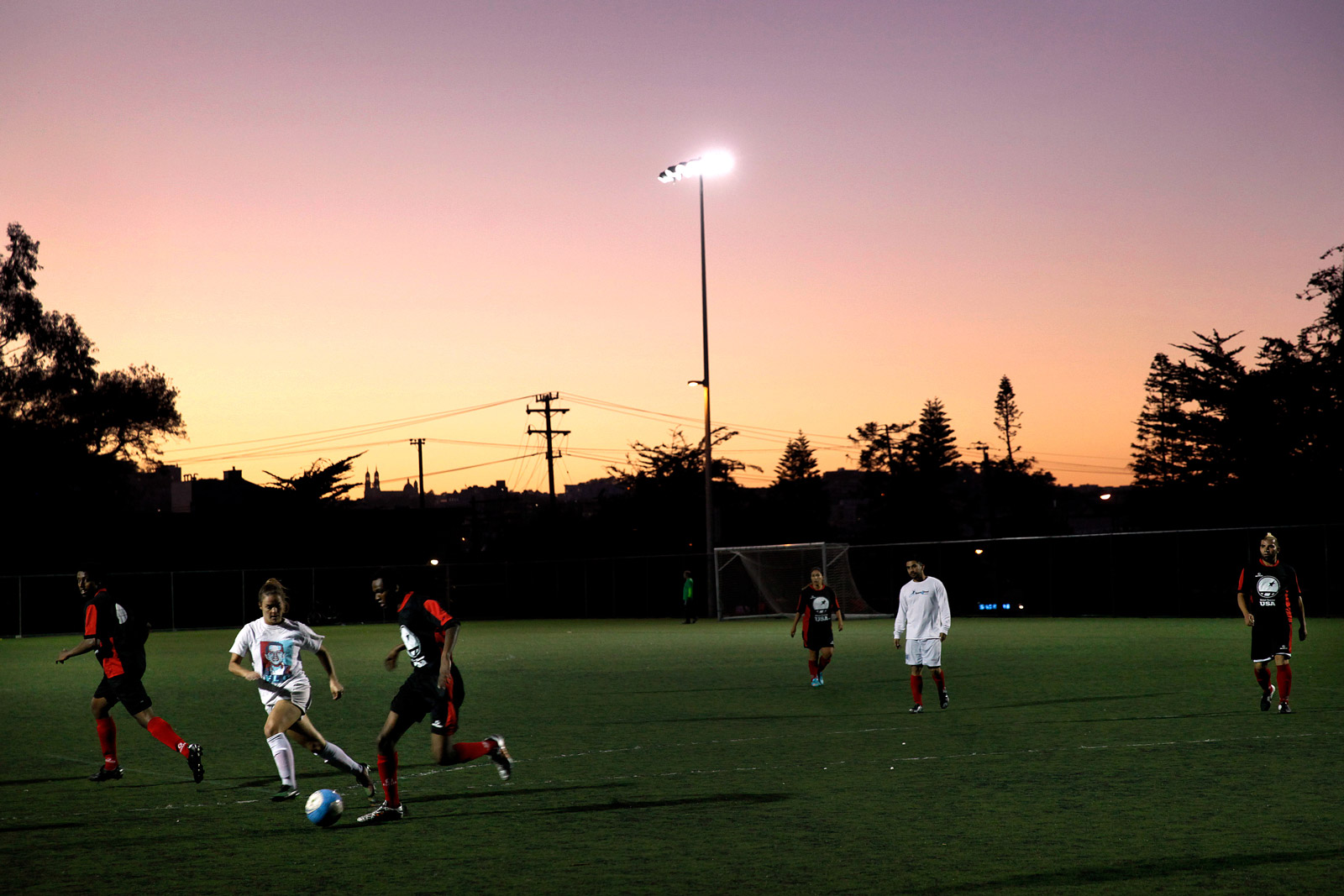 "Each time we go to the field for practice or a game, we focus on different goals: taking the space, playing with heart and showing up," Black says. "That's one of the most important ones -- showing up. You have to show up to play any of the game." 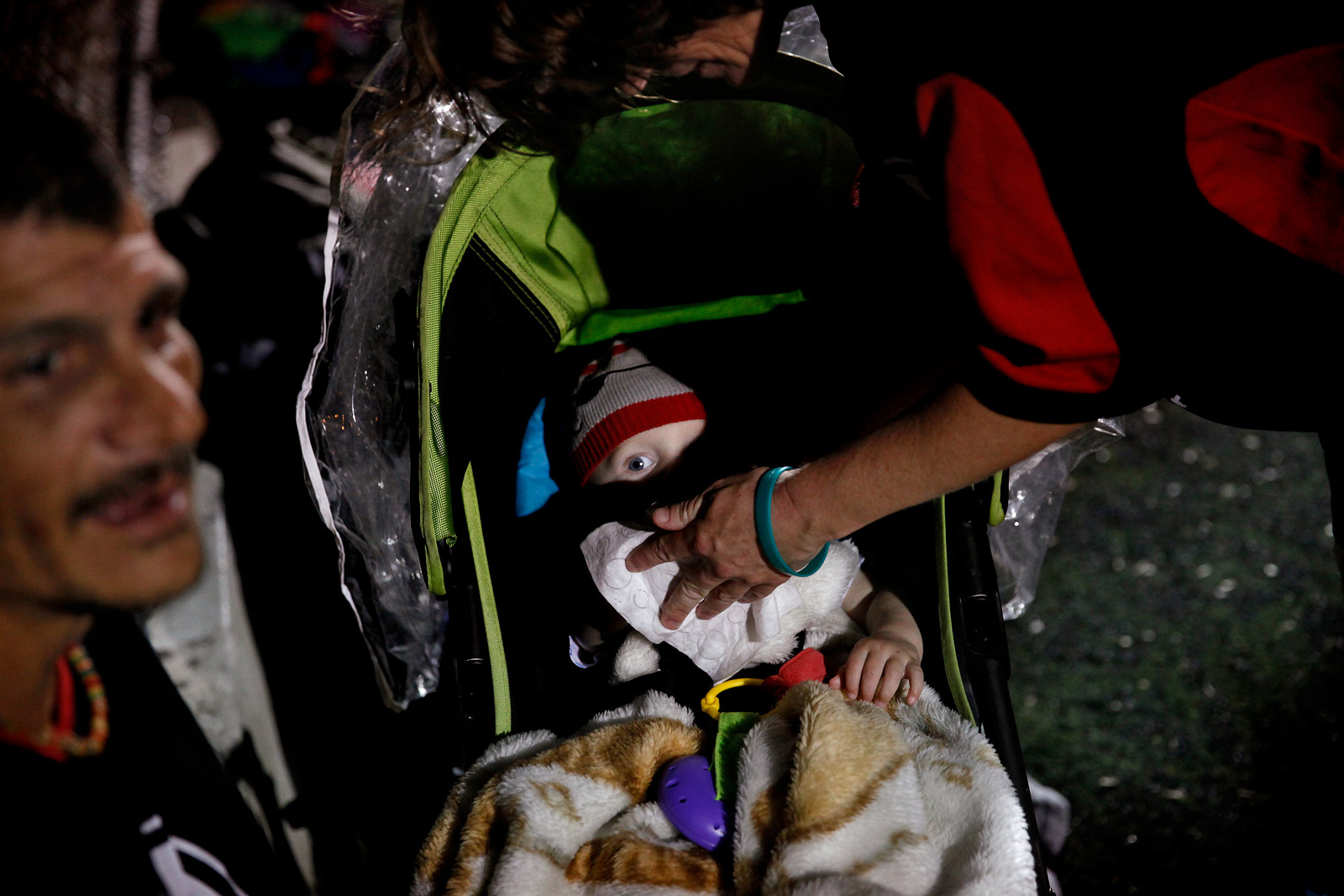 Danielle Williams, a member of Black's team, tends to her baby, Liam, during a game. Danielle, 42, was on methamphetamine and had been homeless for nearly 20 years when she got introduced to street soccer. "Technically, it was soccer that got me sober," she says. "It was either playing soccer or getting high. I wanted to play soccer." 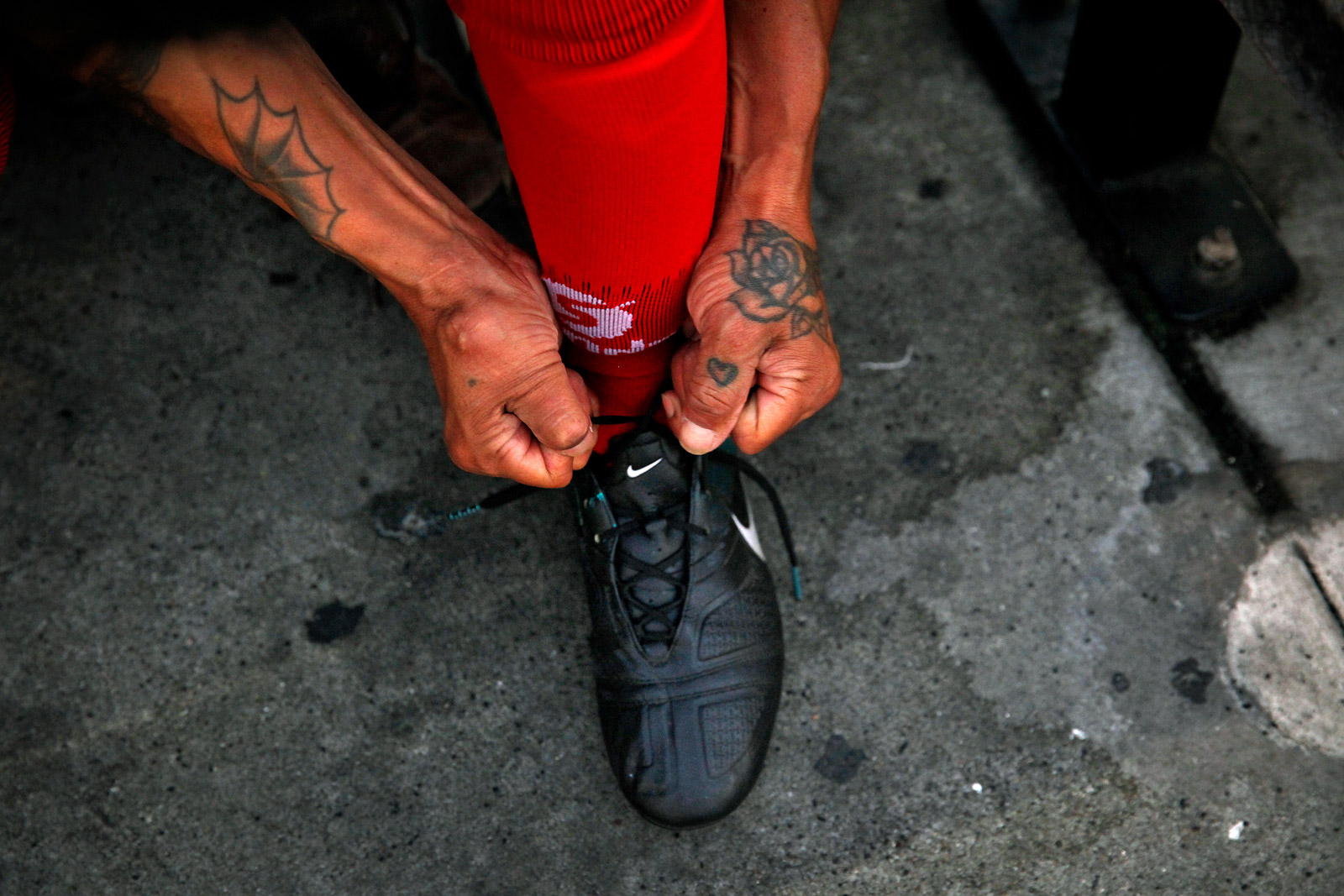 Team Change has a match every week. Eduardo Palomo, 60, laces his shoes for a game Oct. 8.

Sports is, by and large, a pay-to-play industry. We're creating something accessible." 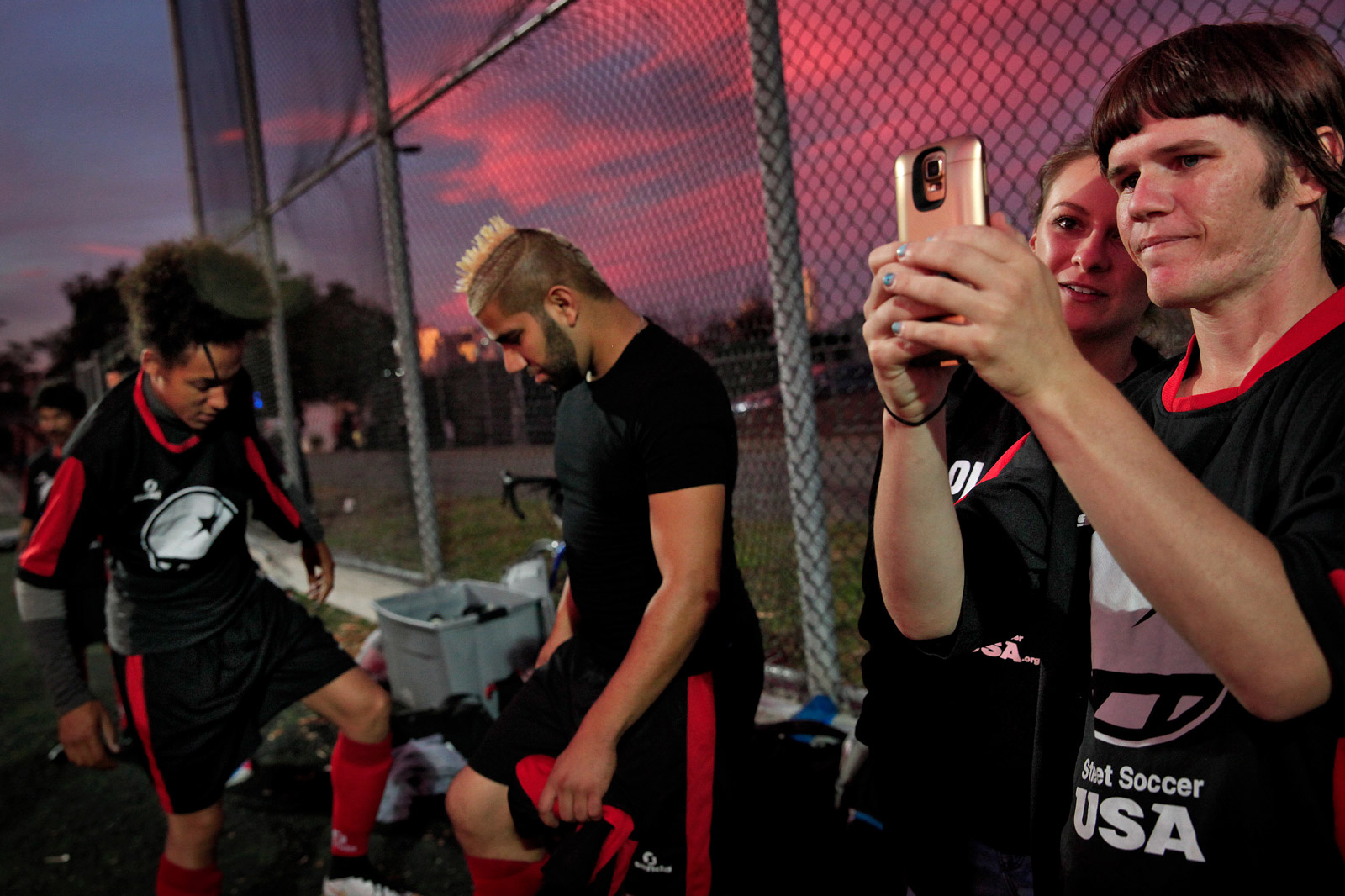 Black and her coach, Pennington, take photos of a sunset during warm-ups. Black describes the team as "the family you want to have." 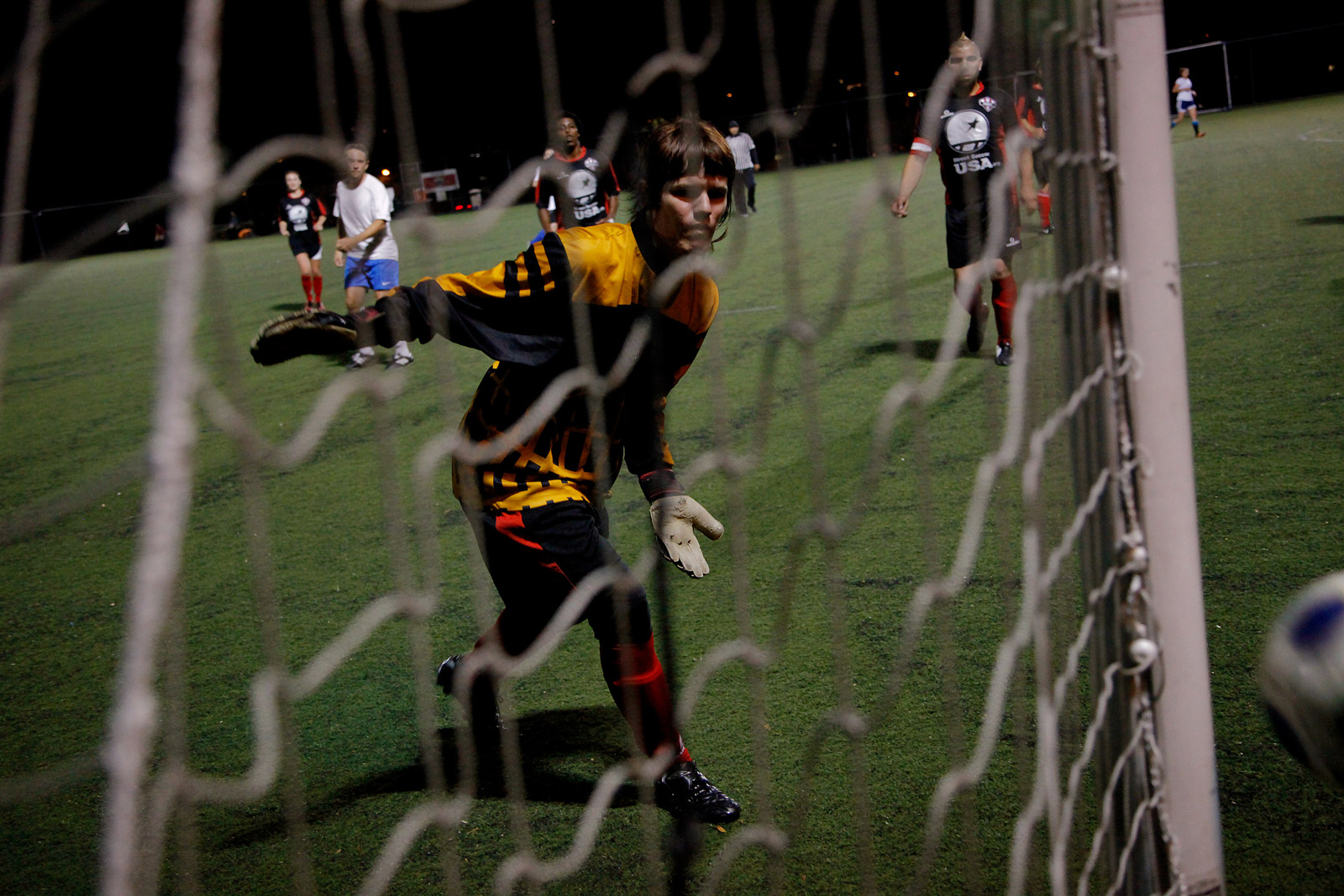 Black warms up with her teammates before the match. Black primarily plays goalie, though she will also move forward as a striker. She calls herself "the juggernaut" because she's a fighter. Part of her struggle has been finding support as a transgender woman. Before moving to San Francisco, Black and her then-girlfriend, Angel Morales, were living with Morales' parents; once she came out, Morales' parents threatened to kick her out. 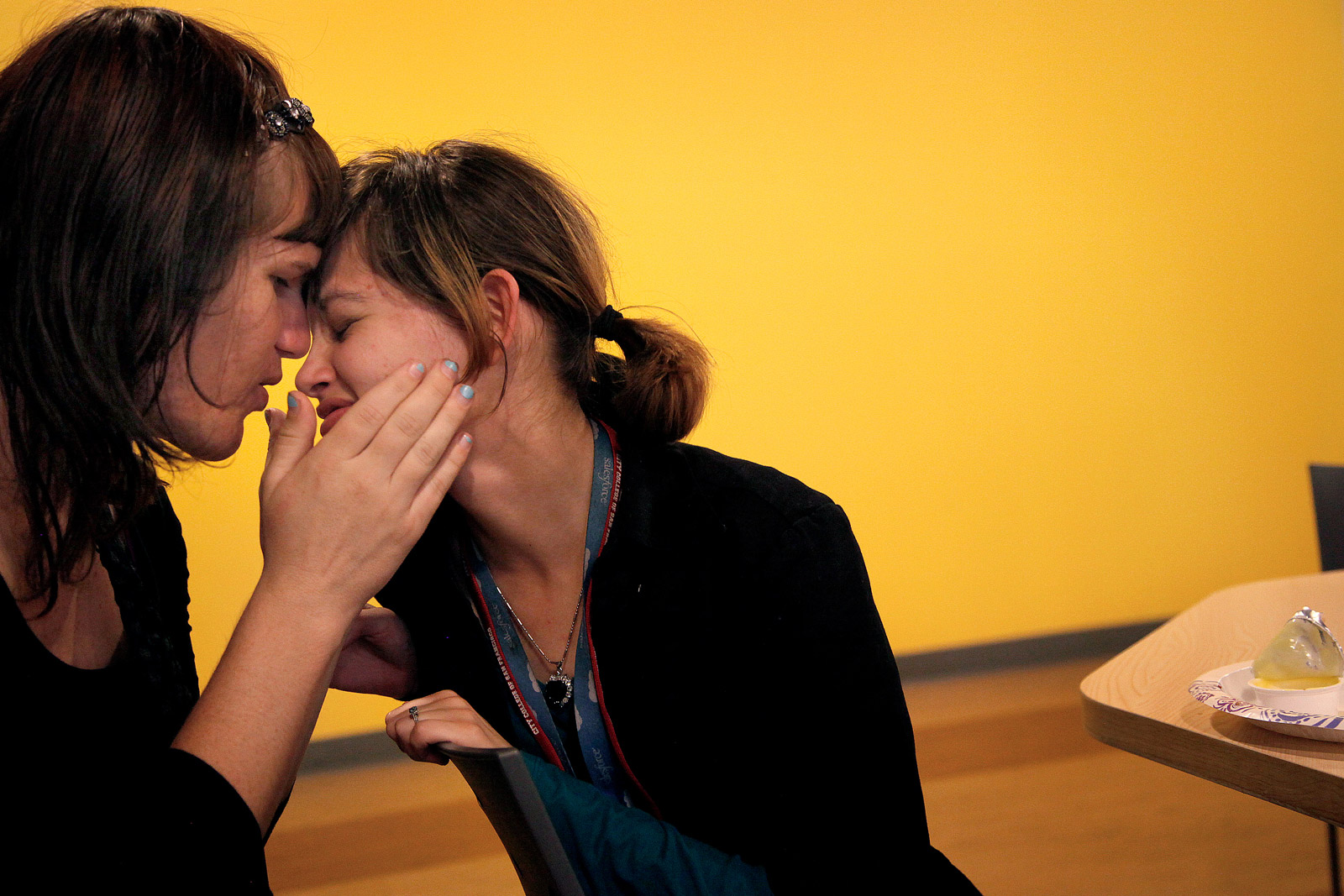 Black shares a moment with Morales on Oct. 21. Black chose San Francisco after a member of an online support group for transgender youth offered to send her to Los Angeles, Seattle or San Francisco. "Never been to San Francisco; don't know anything about it; all I know is it's LGBT friendly," she says of that time in her life. So she accepted a one-way bus ticket. Morales joined her a couple of months later. 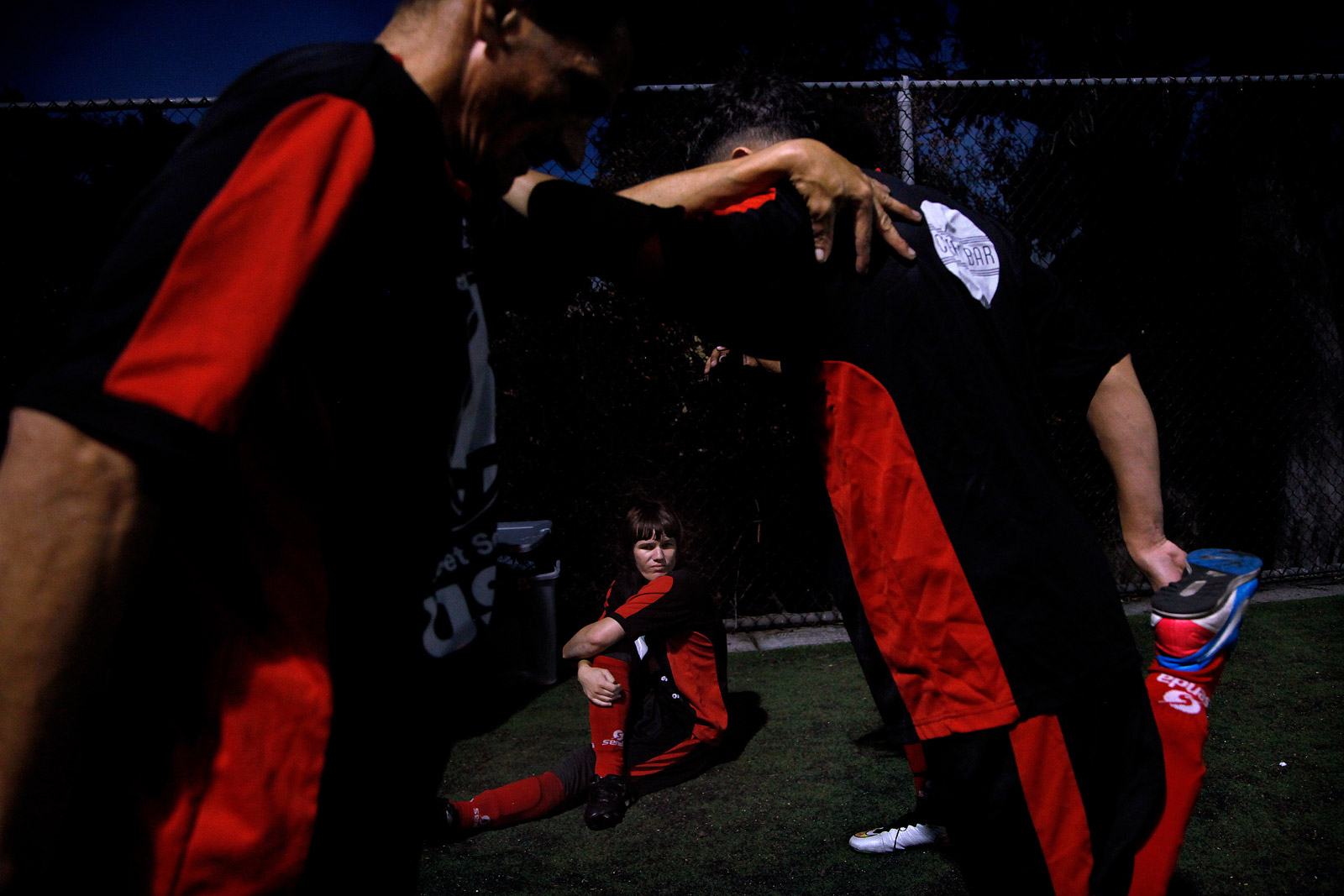 Black and her team prepare for a match Oct. 22. 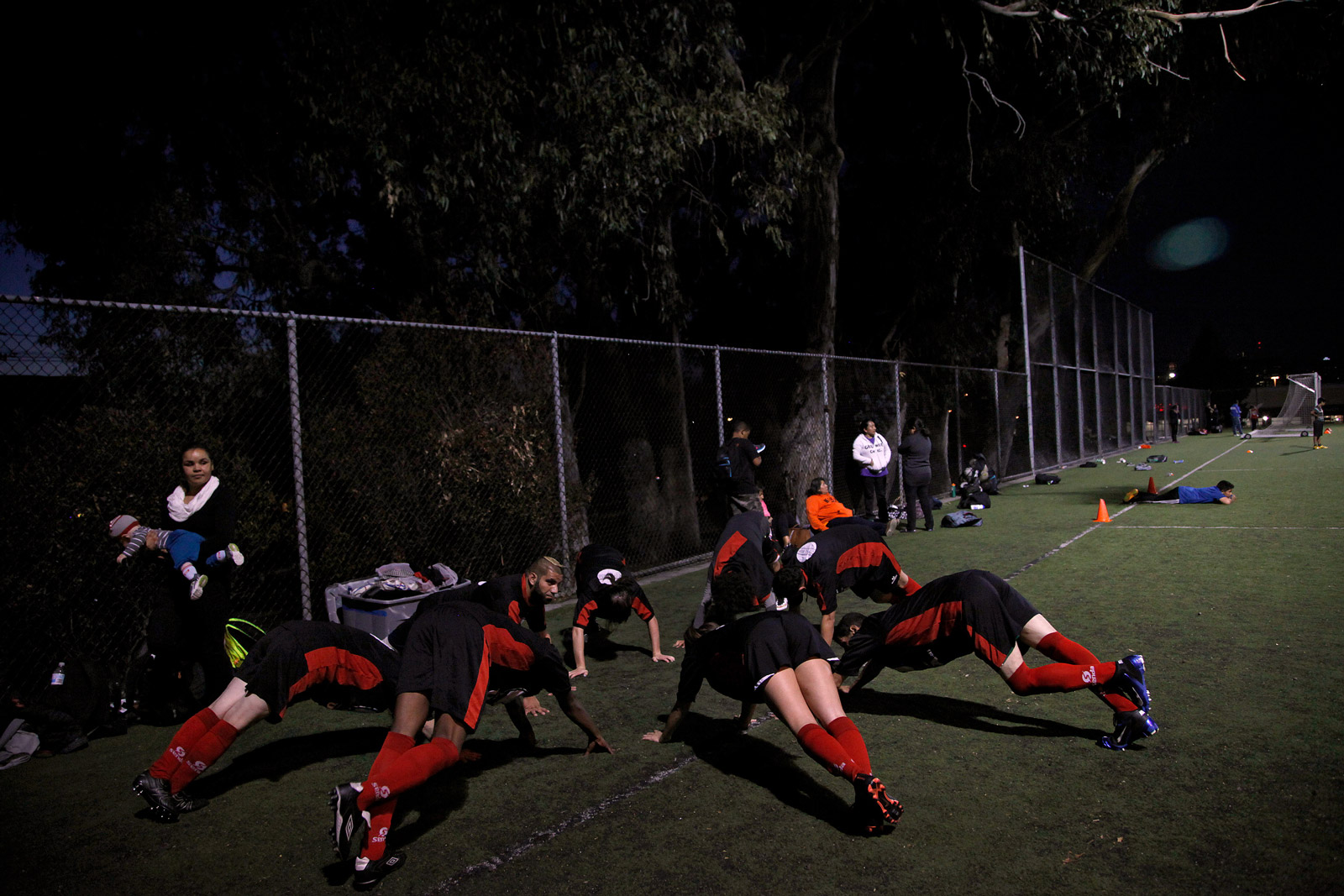 Team Change comes together for a group stretch before taking the field. Street Soccer USA strives to create a space for players to "be accepted for who they are and where they are," says Rob Cann, the organization's chief operating officer. 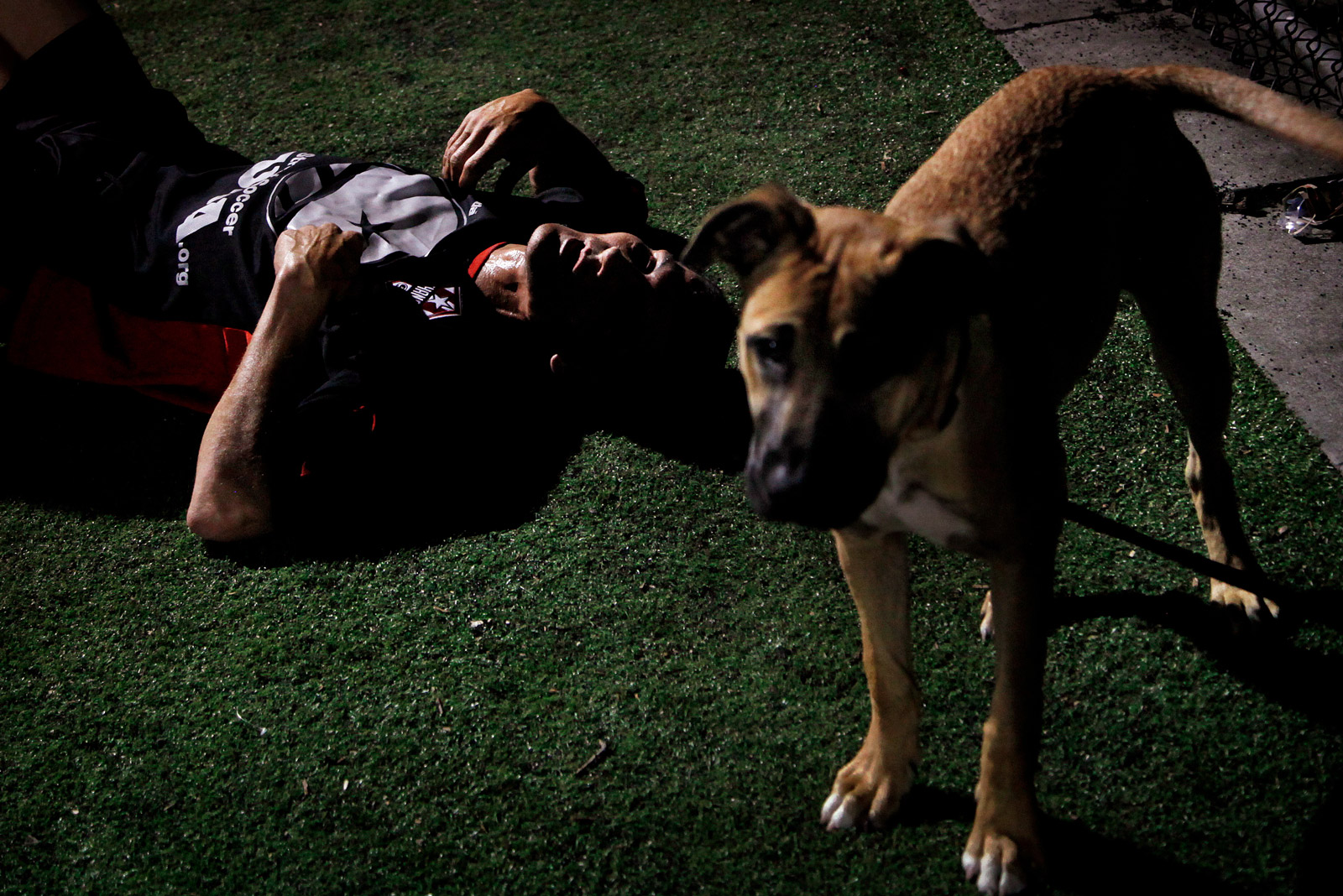 DeGroat rests during the match. He has been on the team for about four years, though he was temporarily suspended for alcohol abuse. "Soccer helps me keep my depression at bay," he says. It also helps him cope with his anxiety and bipolar disorder. "It's a way of helping me get back to where I need to be." 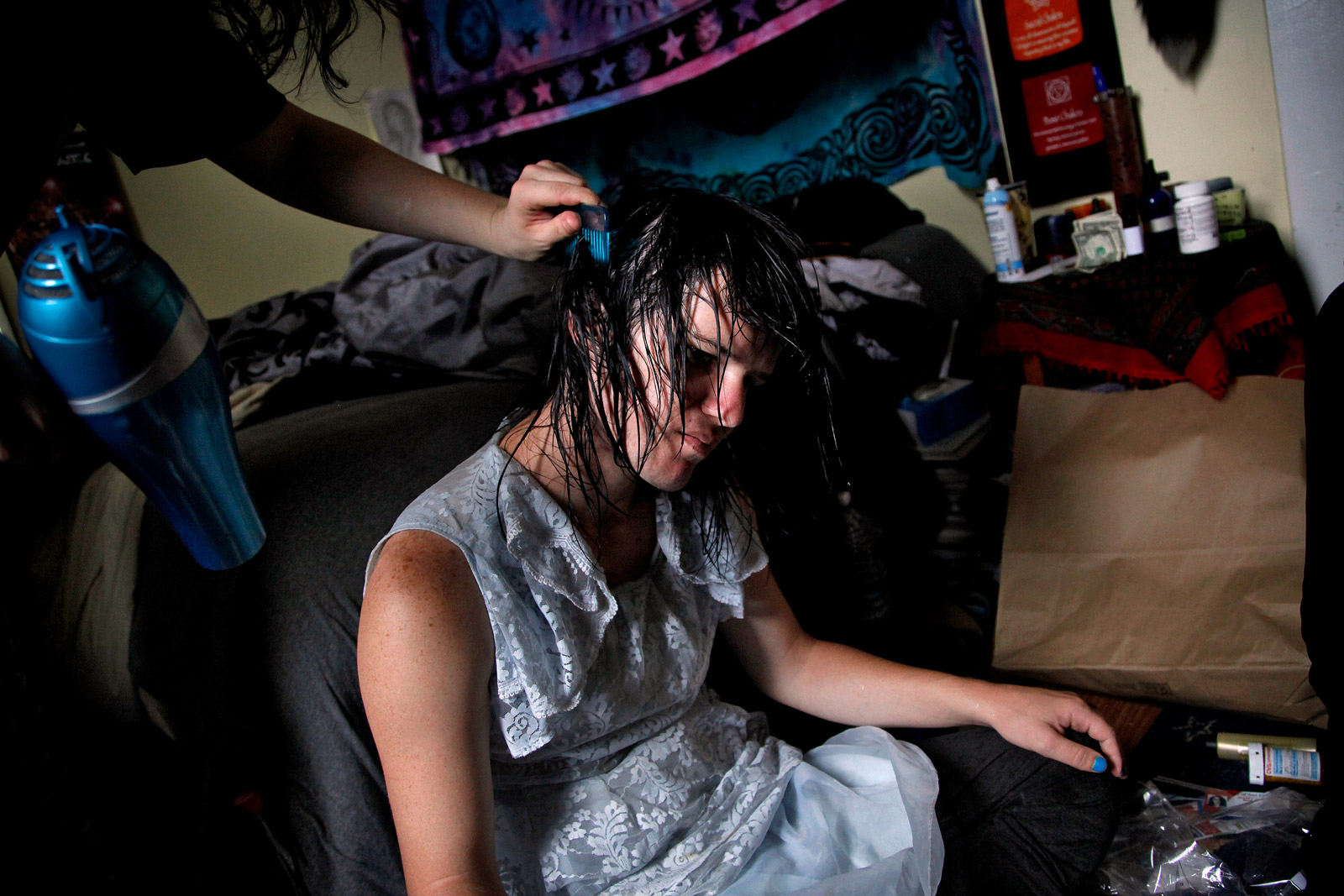 Black moved to San Francisco partly because of its acceptance of the lesbian, gay, bisexual and transgender community. On Oct. 28, she prepares for her wedding. 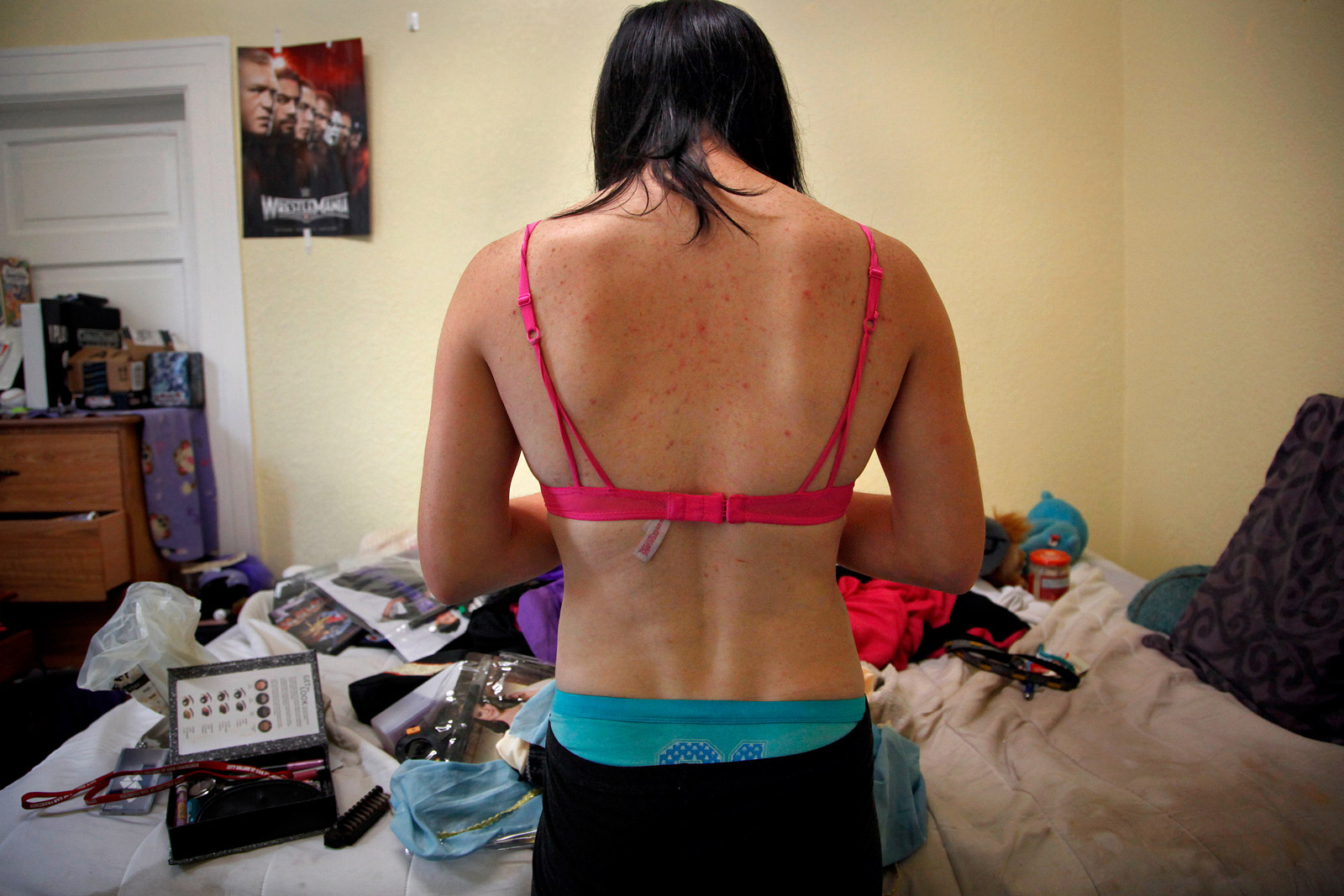 Black dresses for the ceremony in her single-room occupancy in San Francisco's Castro District. "My room is a mess, it's always a mess. We're not allowed refrigerators or microwaves. We don't have a kitchen. We have nowhere to store our food, so we have to rely on our food stamps." 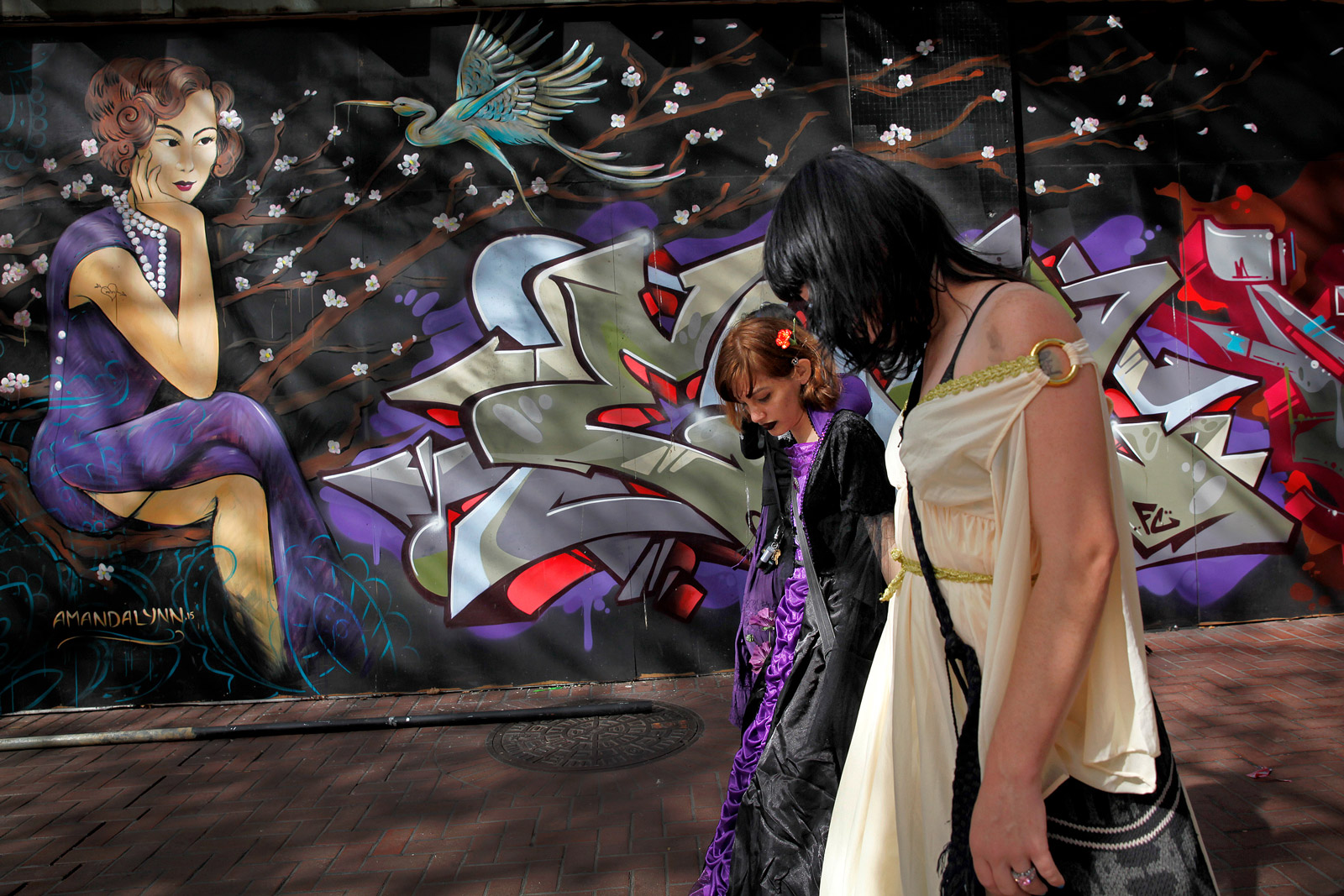 Black married Morales surrounded by friends at City Hall. They walk together after their wedding, past one of the murals painted in San Francisco. 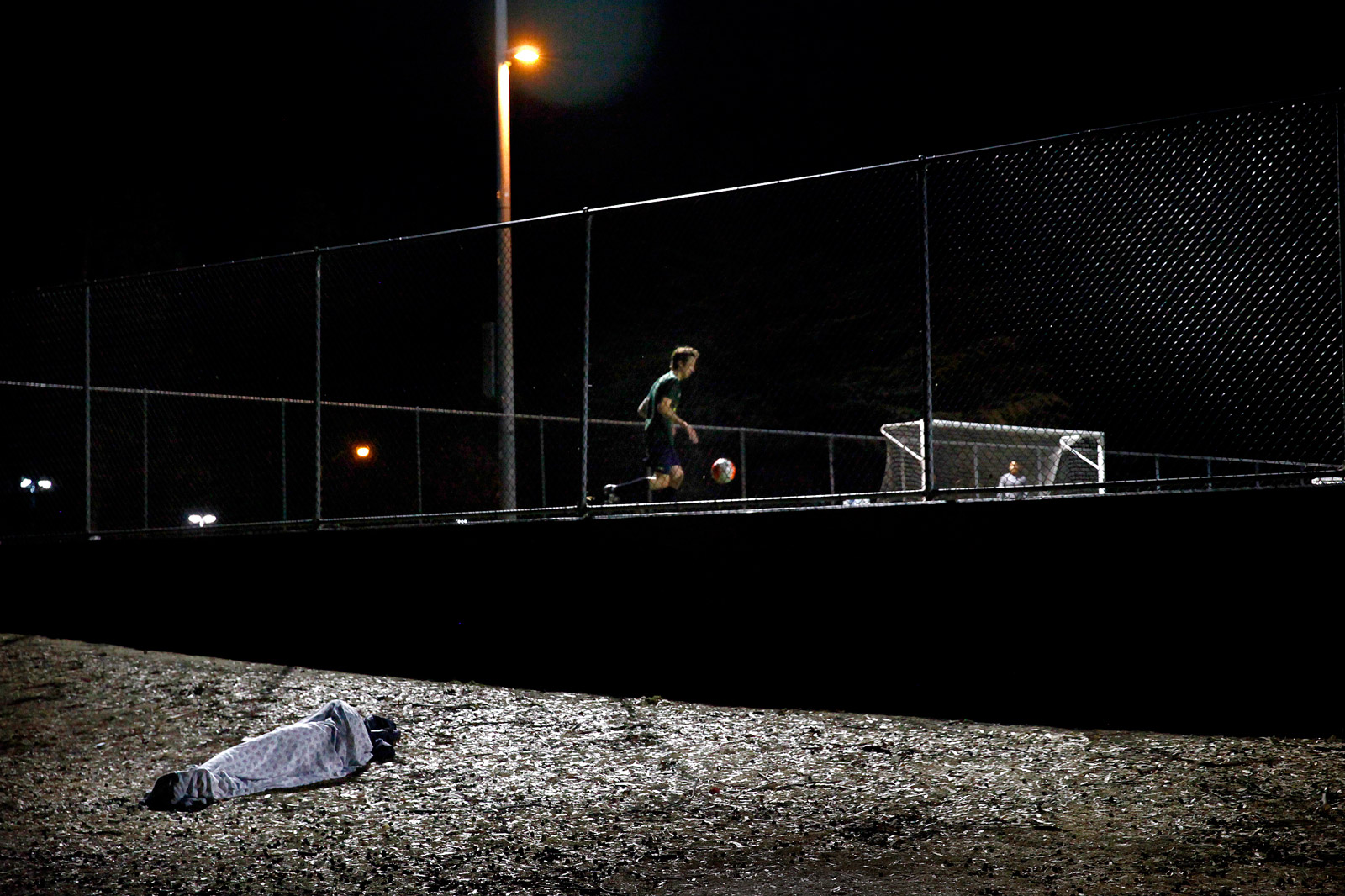 "I don't look homeless; I don't fit the persona," Black says. "There's a few stages of homelessness: There's completely out on the streets where you have to fight to survive every day, and there's the homeless where I'm at -- in [a single-room occupancy]." 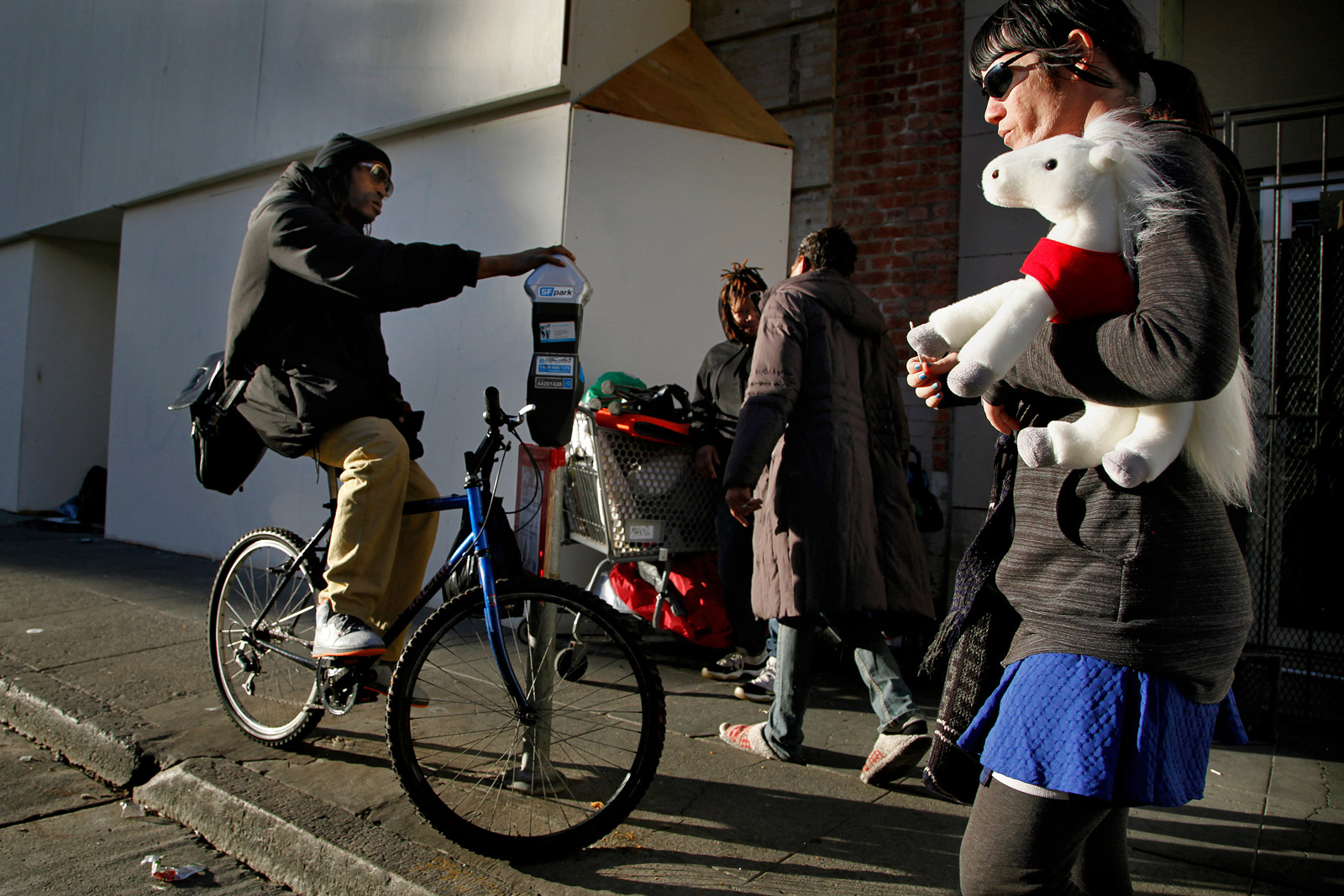 Although Black says she doesn't fit the profile of a typical homeless person, her situation is common. The Williams Institute, a UCLA think tank focused on sexual orientation and gender identity law, says 30 percent of youth receiving services from housing and street-outreach programs identify as LGBT. 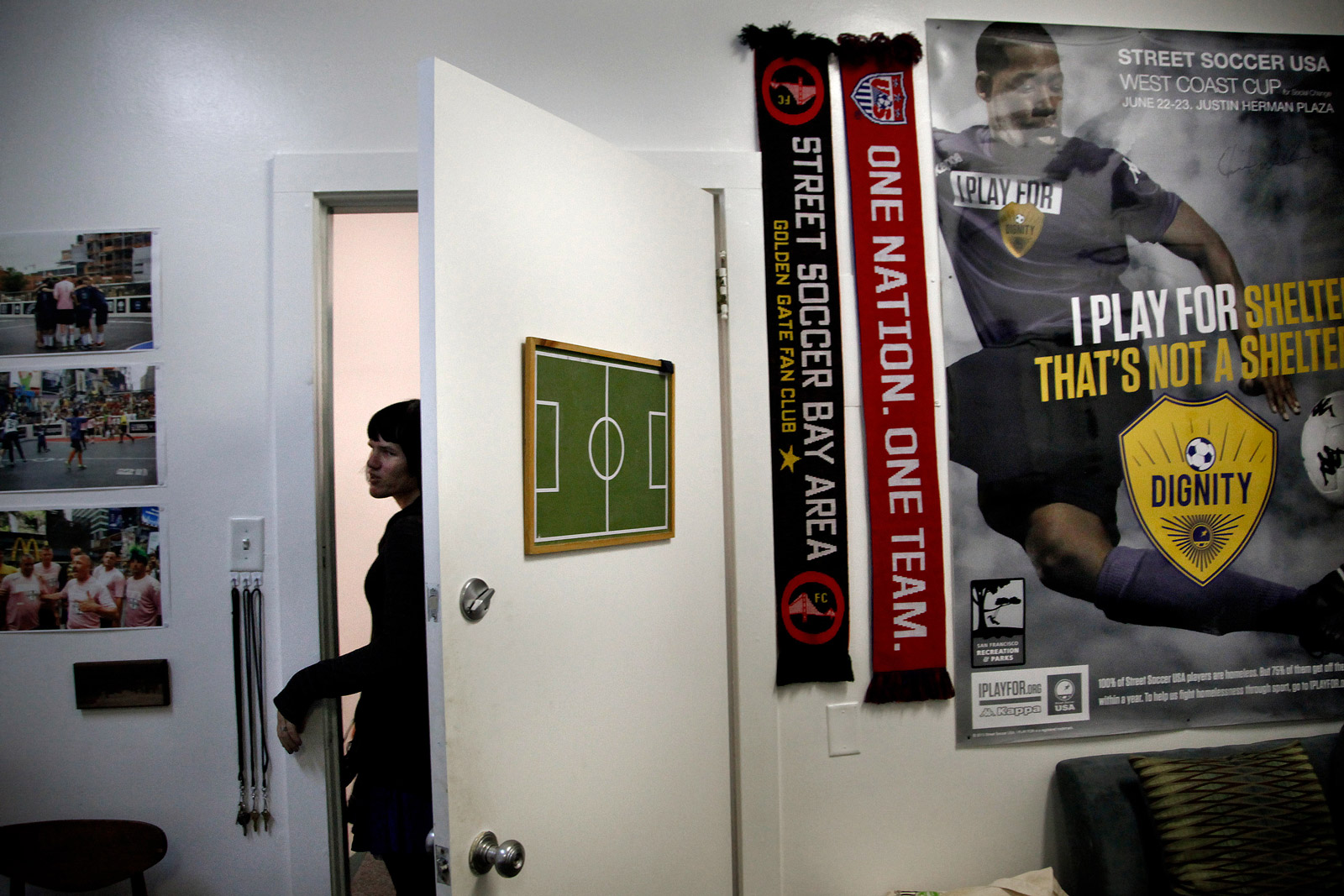 Black's work for Street Soccer USA, which has its office in the Tenderloin neighborhood, is part time. She also attends a learning center program that teaches her skills applicable to the health care industry. For that, she gets paid $75 a week. The coaches are pushing her toward full-time employment. 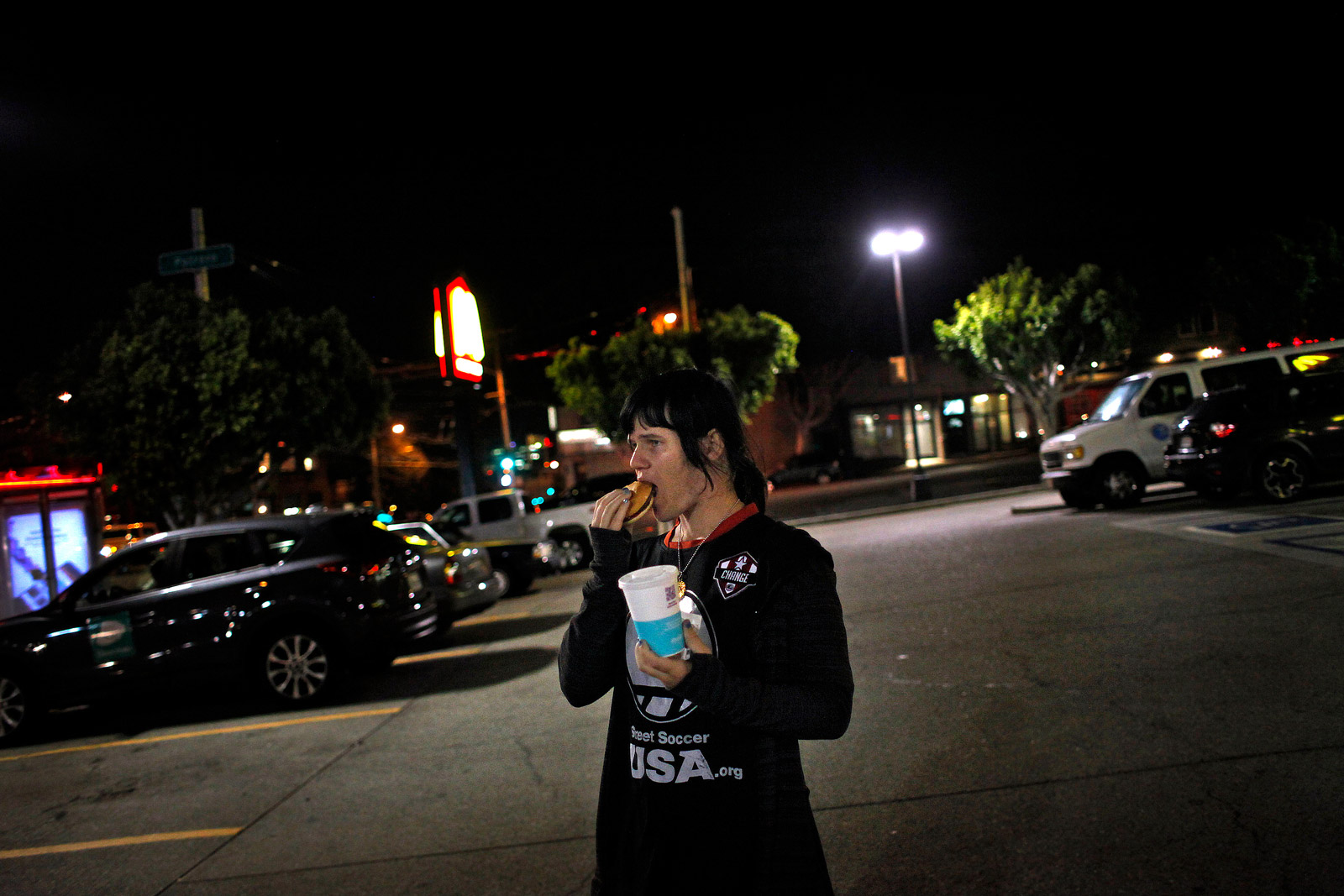 Black walks back to the pitch before her team's weekly match. She gave Morales her food stamps when hers ran out, so Black asked a Street Soccer USA teammate for a dollar to buy a hamburger from McDonald's. 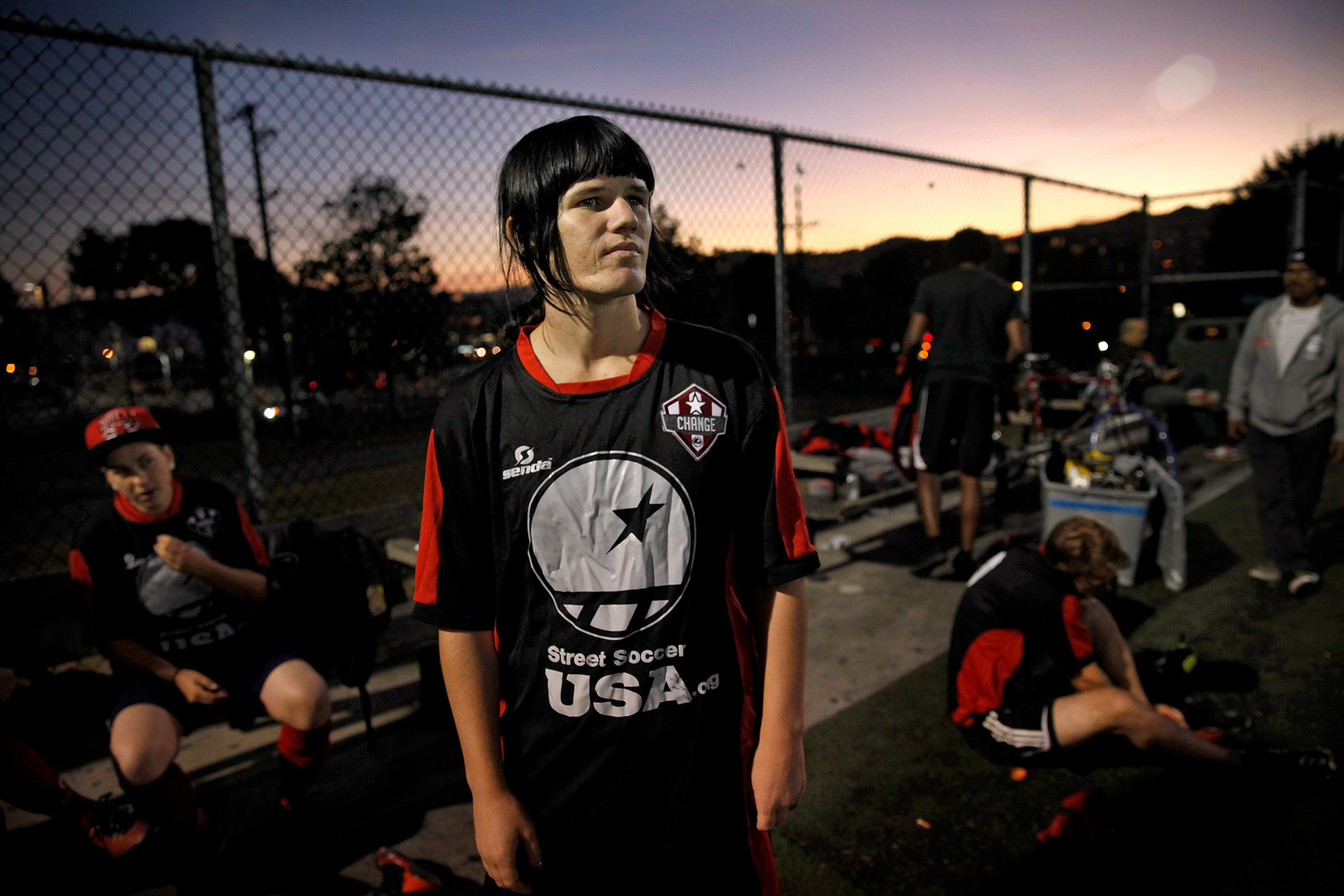 Before she transitioned, Black was feeling bad about the way she looked. A friend saw her crying and called her "Isabella," explaining it meant "beautiful." It stuck. "Every now and then, people catch me on the bus saying, 'Is beautiful.' And they're like, 'What's beautiful?' And I say, 'I am.' "