here are more than 20 million football fans in Mexico, according to the NFL, second only to the U.S. But what about the college game? Just five years ago, a second college football league was born in Mexico, and some 8,000 students now play in the country's two leagues, CONADEIP and ONEFA. How much excitement is there? Both leagues start early, with feeder programs at the youth level that can take kids into the college game, where they can play in stadiums that seat upward of 30,000 people.

It's boom times in Mexico for the "other" football. And nowhere is that more evident than at the Tazón de Estrellas, an annual all-star game between teams from CONADEIP and Division III schools from the U.S.

The teams have traded victories, tying the series at three wins each. Now it's a friendly border battle that continues to grow each year. "We never thought that it was going to be packed. Since we arrived we noticed the large crowds. In fact, we were worried that our families were not going to be able to get tickets," Mexico quarterback Norman Eduardo Contla Parra said.

In December, they met for the seventh year, in front of a sold-out crowd of 2,600 at CETYS Universidad Estadio Margarita Astiazarán de Fimbres. It was another close game, coming down to the final minute before the U.S. sealed the victory 15-14. "There's a rivalry now. They're really good. We want to prove we are just as good and that we can compete at their level," Mexico lineman Diego Alfredo Bedolla Flores said. 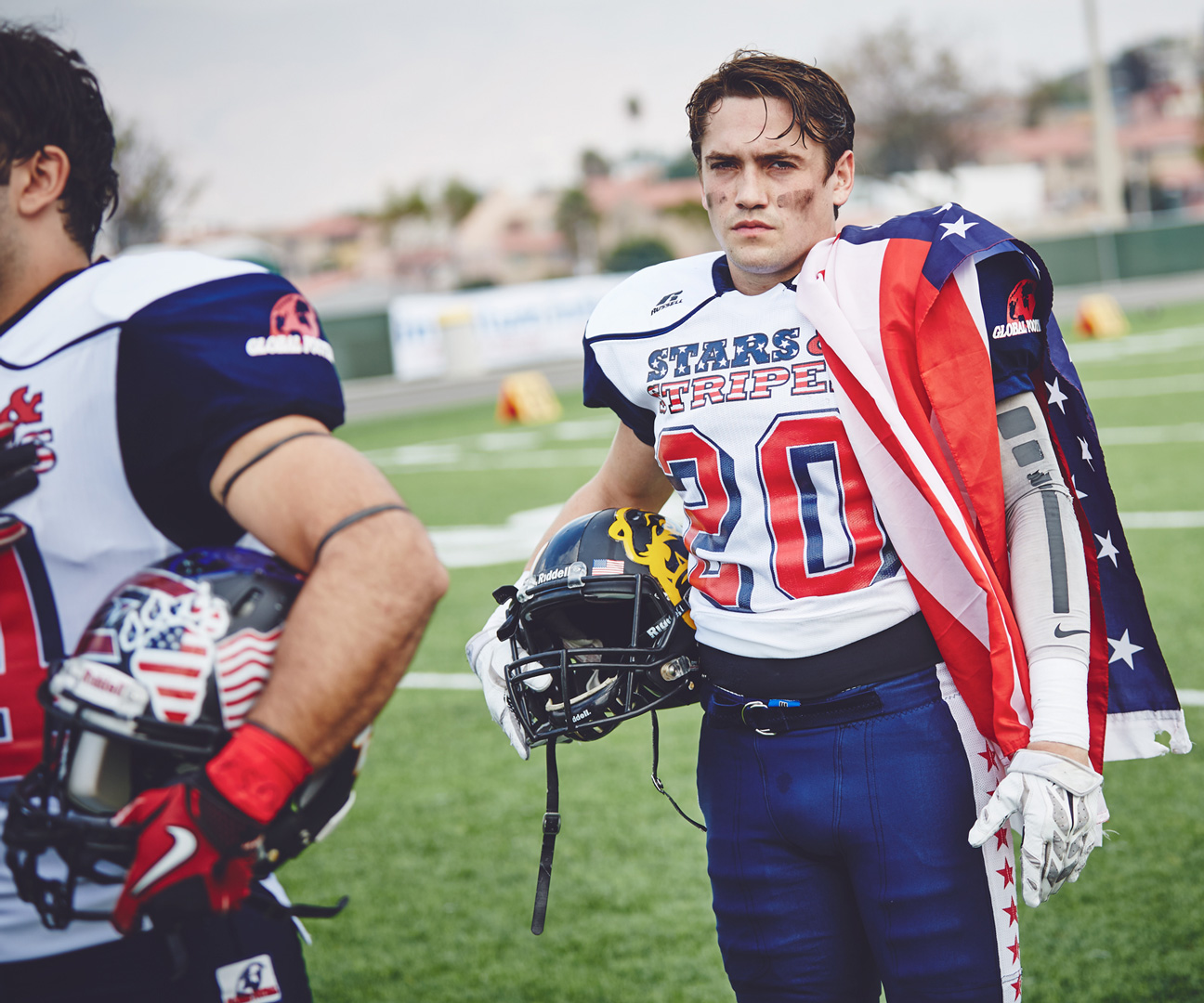 Defensive back Mitch Osadchuck, draped in the U.S. flag, was one of many players on both sides who took extra steps to show their national pride during the Tazón de Estrellas pregame ceremonies. 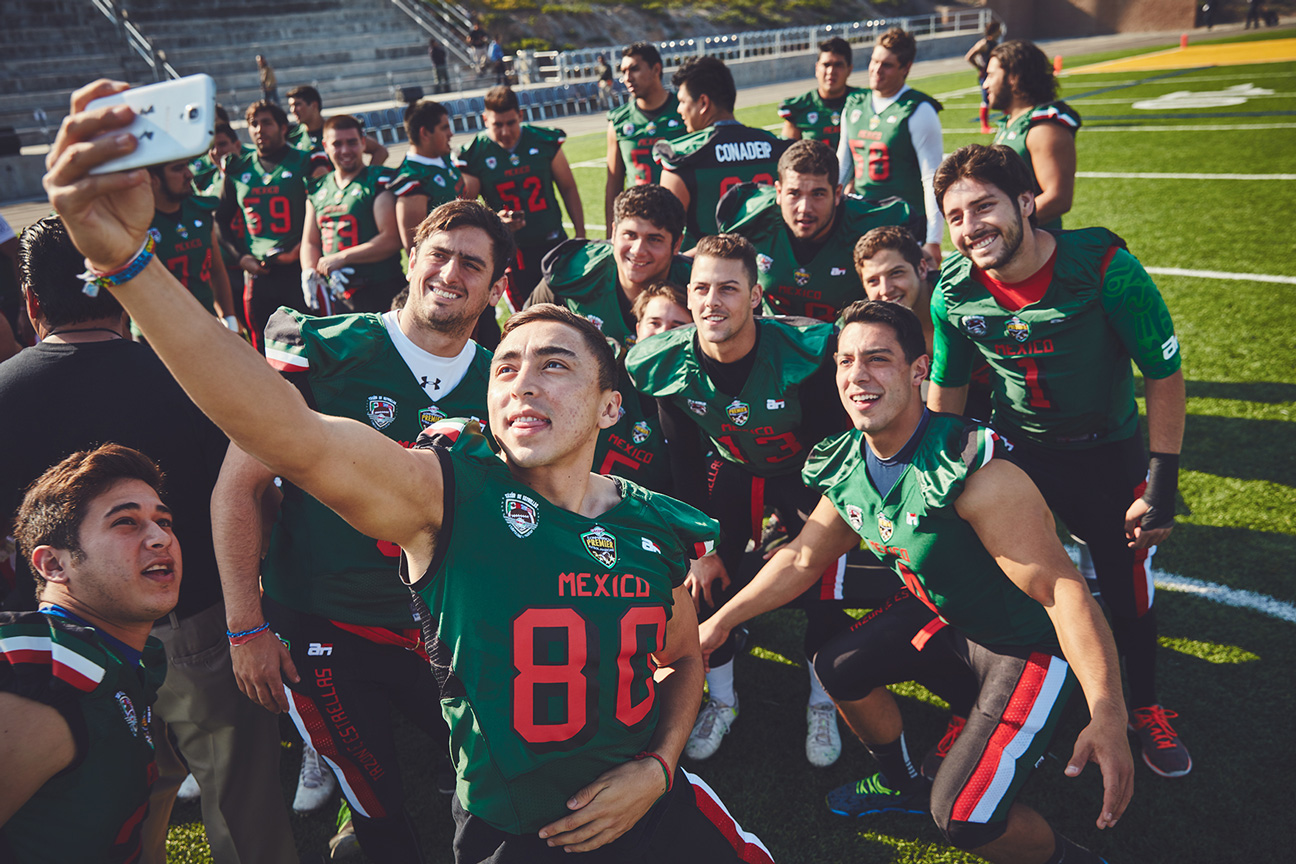 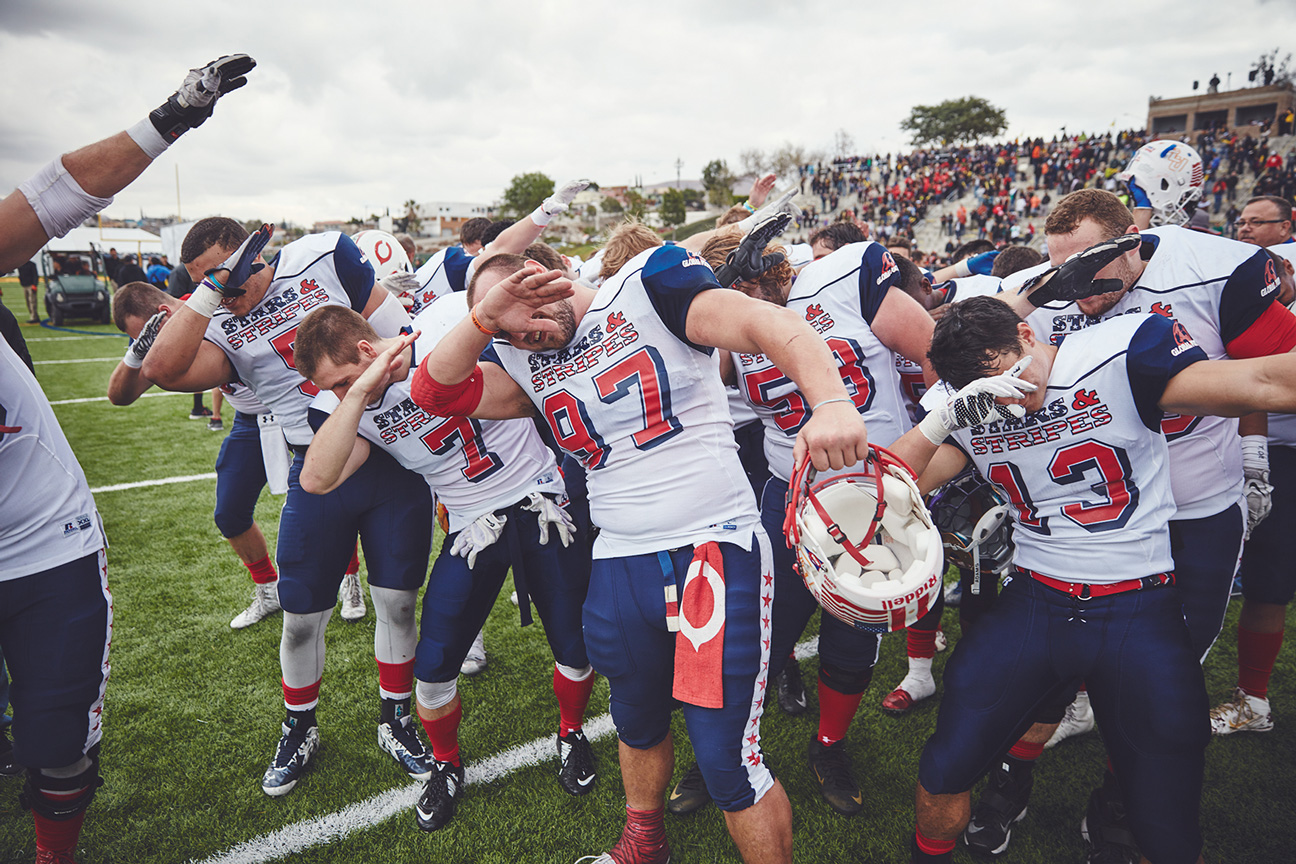 The athletes of Team Stars & Stripes celebrate their last-minute victory with a group dab at midfield that would make Carolina quarterback Cam Newton proud. 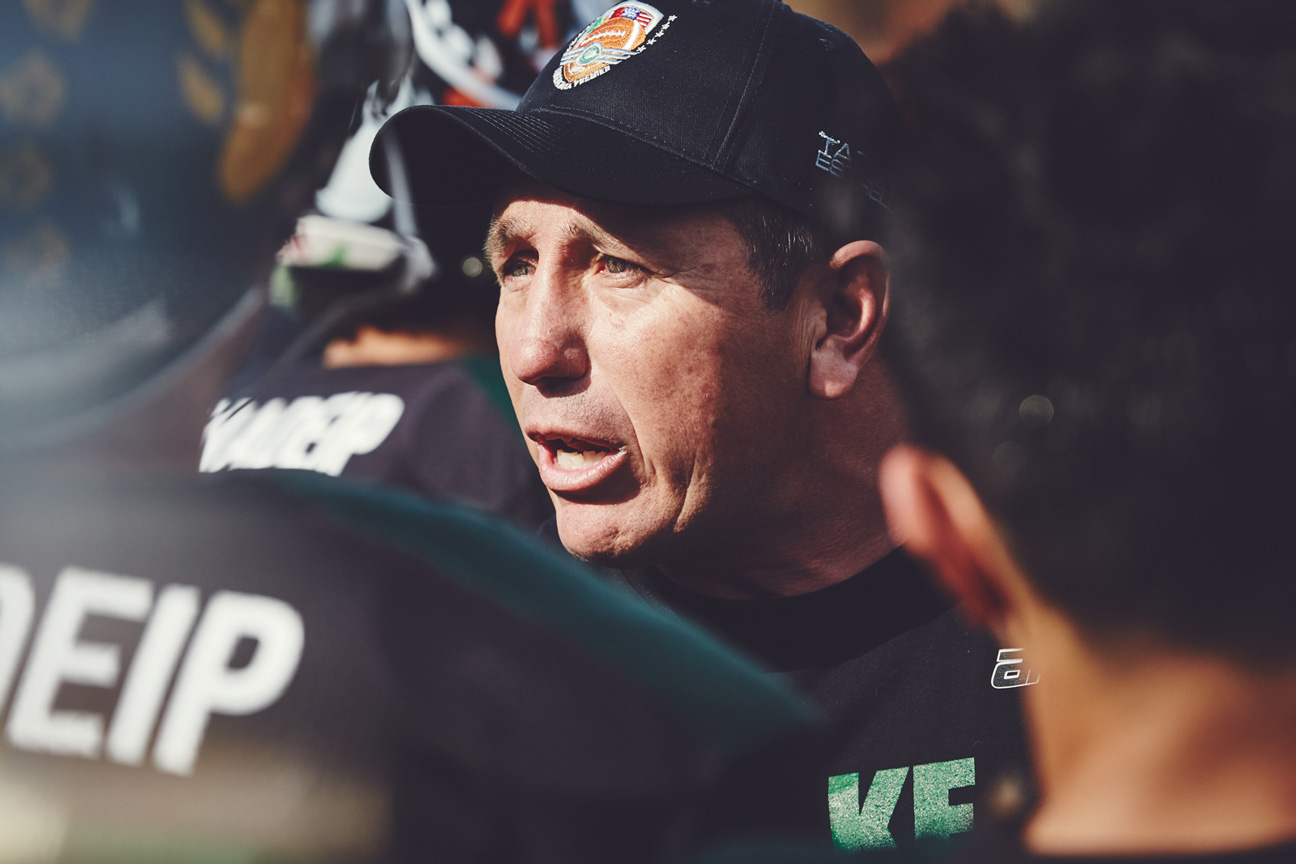 Mexico coach Horacio García talks with his players during the game. This is his first year coaching the CONADIEP All-Stars, but he led a Mexican national team to victory in the World University American Football Championship in 2014. Most of the year, García coaches the Borregos Salvajes (Rams) at Tecnológico de Monterrey campus in Toluca. "We have 61 players from different states of Mexico now, from Puebla to Tijuana," he said. 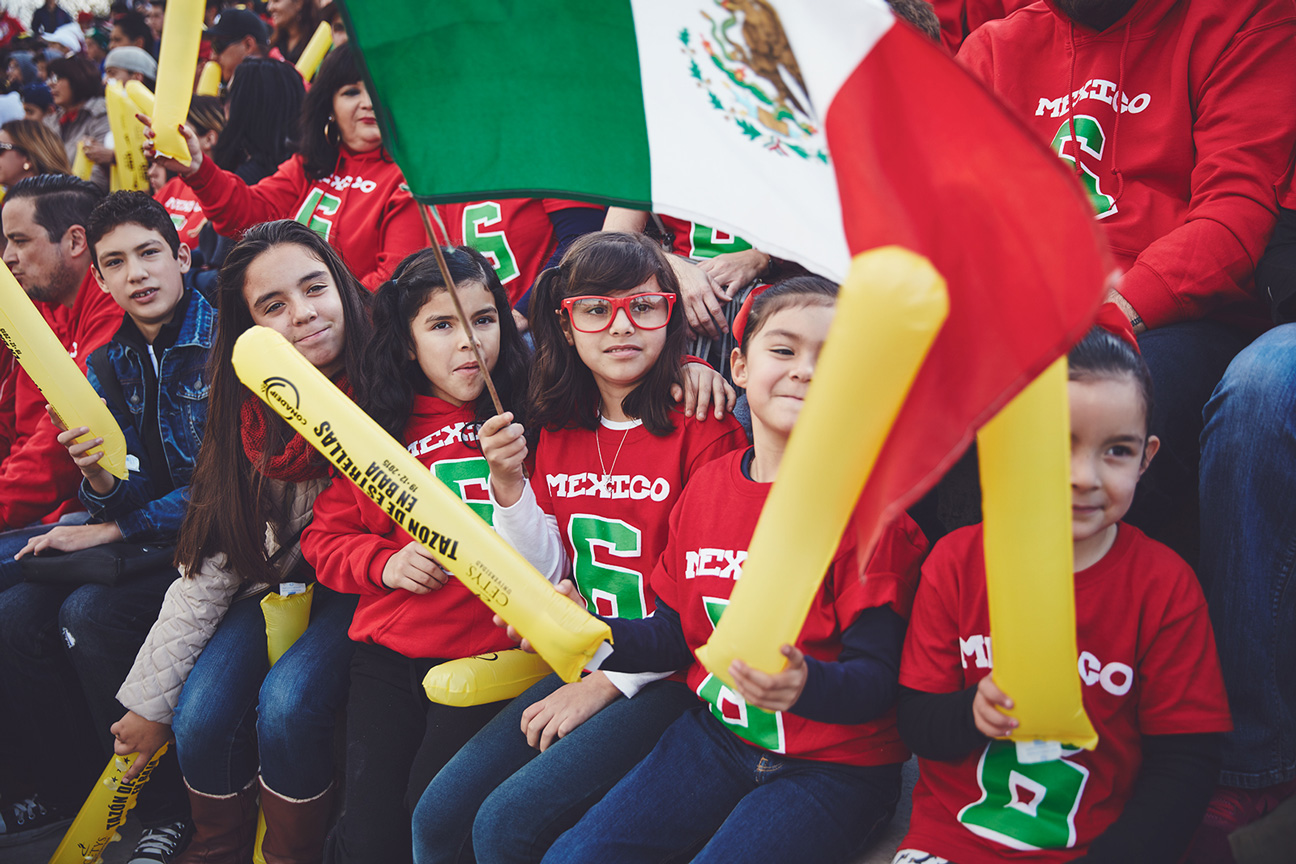 Fans of all ages arrived at the stadium early for Tazón de Estrellas. One way American football has gained traction in Mexico is through youth programs, tackle and flag, for boys and girls across the country. 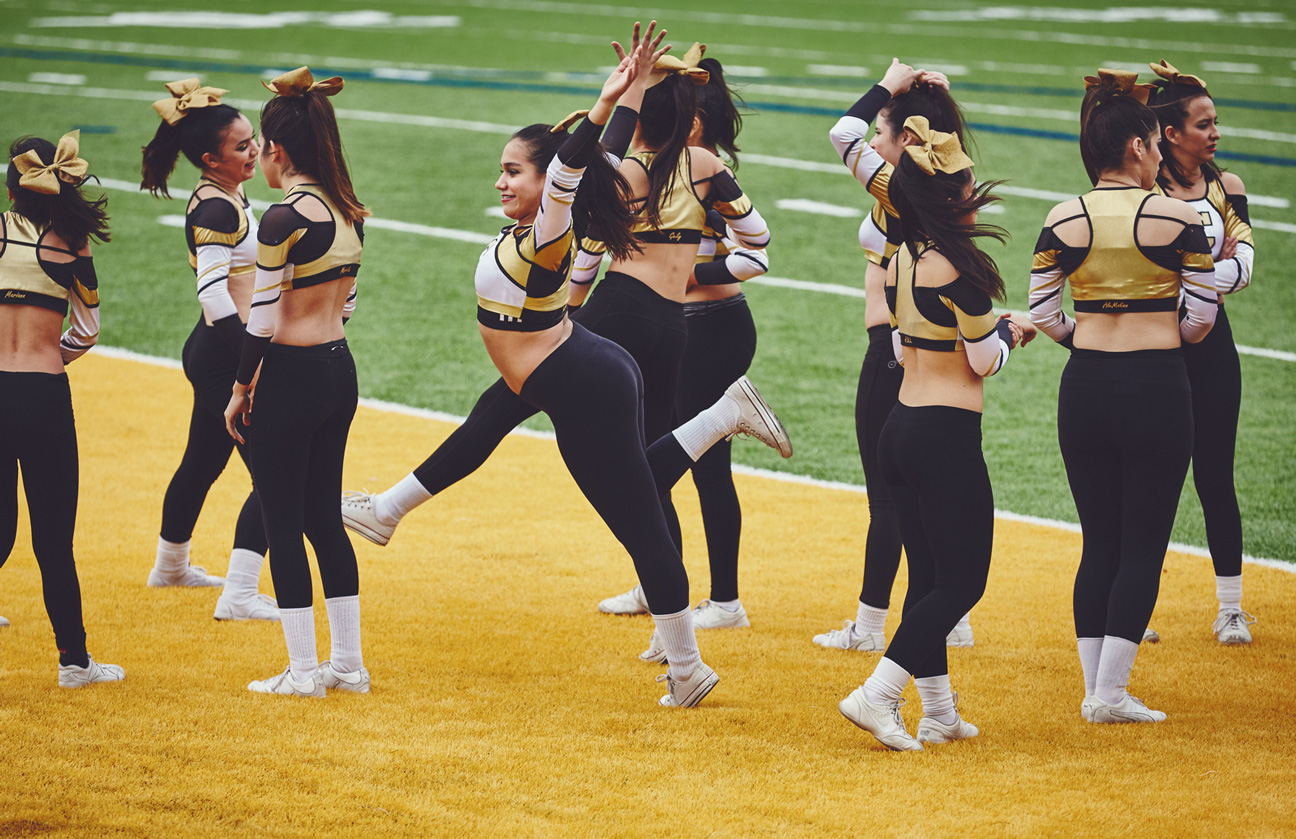 Cheerleaders from CETYS Universidad worked hard to keep the crowd in the game. As American football has grown, so have the familiar trappings and customs along the sidelines. 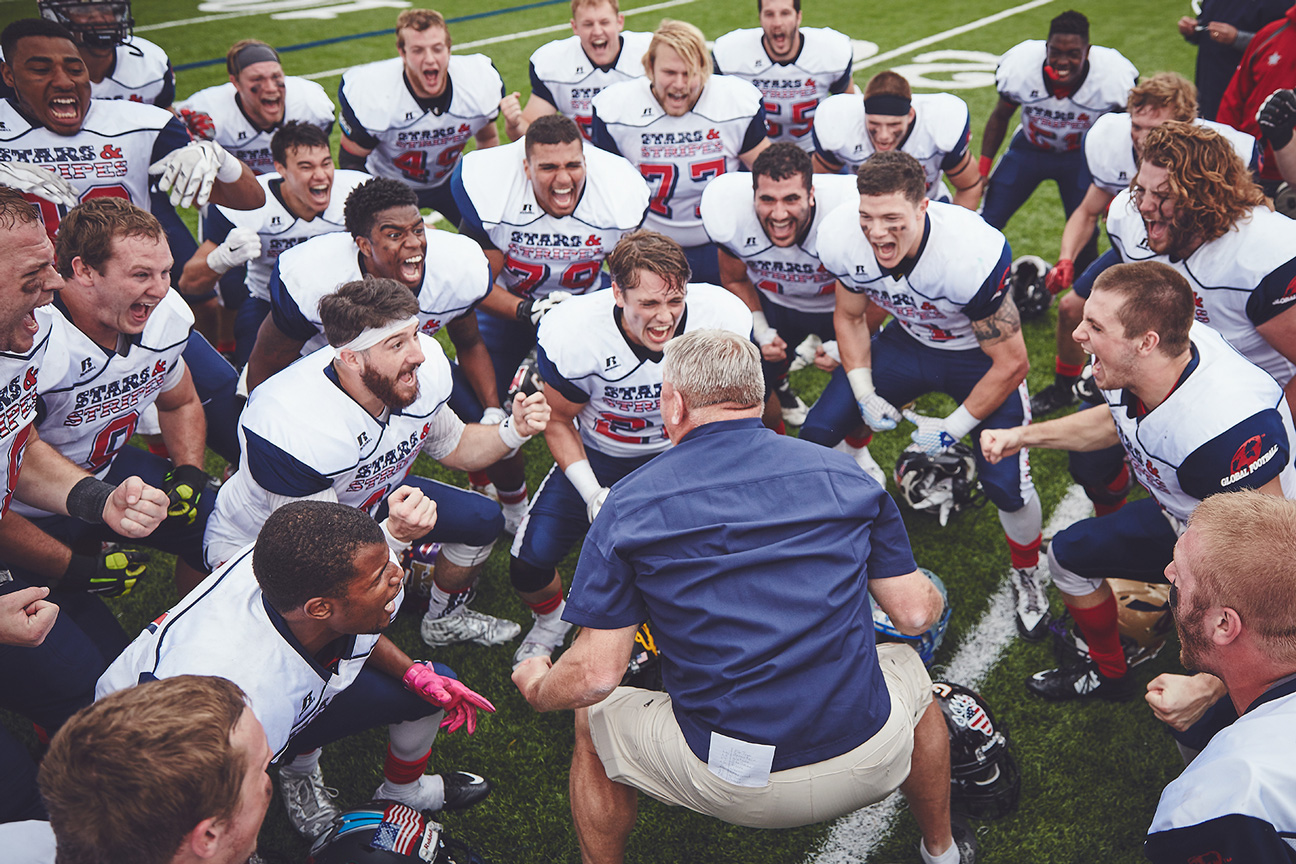 With time running out after the second touchdown, U.S. coach Don De Waard (back to camera) decides to go for two, putting Stars & Stripes up 15-14. Mexico charges downfield, lining up for a 51-yard field goal with time expiring. The kick? No good. Stars & Stripes celebrates its victory, but the message has been sent: Team Mexico is on the rise.

There's a rivalry now. They're really good. We want to prove we are just as good and that we can compete at their level." 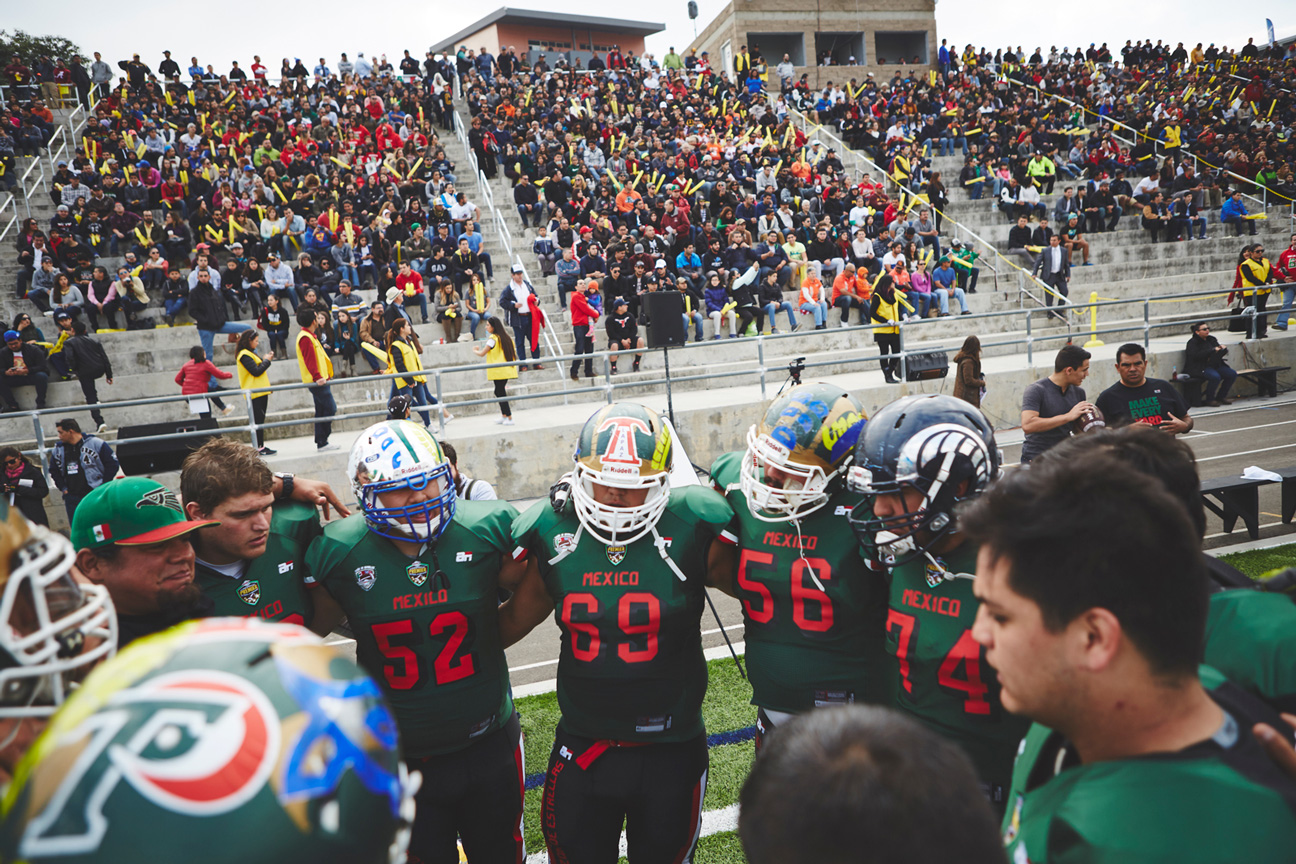 Outside linebacker William Roberto Rivera (No. 69) leads the Mexico huddle, looking to get his teammates ready in the minutes before kickoff. "I think football in Mexico has grown up since 10 years ago," Rivera said. "And it's still growing up. The teams, the fans, the systems." 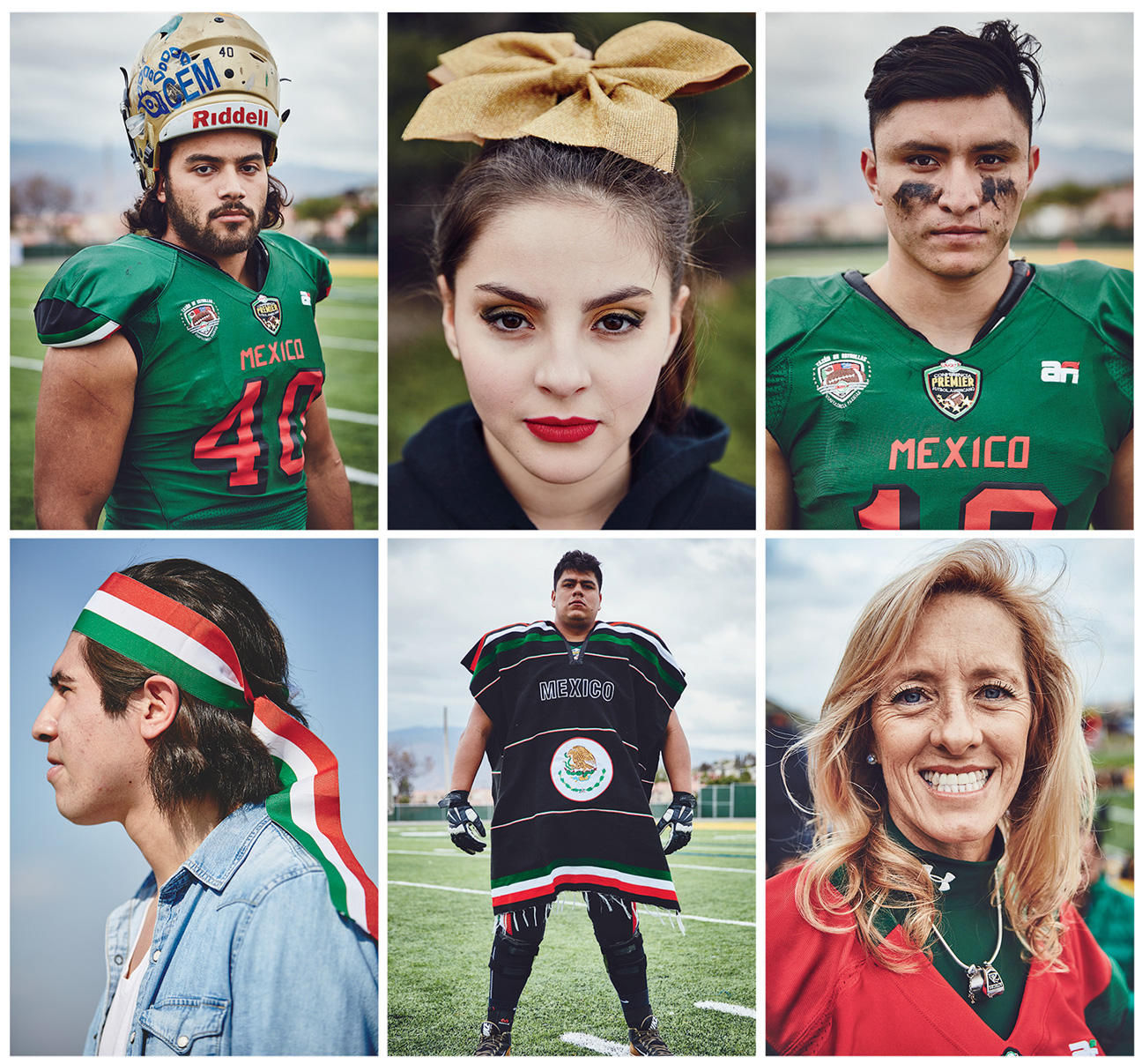 "I'm a cheerleader in high school. It's very exciting. You can feel the emotion on the field and from the fans." -- Mariana Cervantes Aguirre

"We've been playing football in Mexico for a long time. I think it's time for us to take the next step and prove we can play right here." -- Carlos Sebastian Olvera Rivas

"American football is a family tradition. My husband played,  my father-in-law played. My other children were selected for the national team." -- Ofelia Parra

"The level of both teams, it's the same, I think. It was little mistakes, those were the things that made us lose." -- William Roberto Rivera Lara

"My family are football fans, so I watched it when I was little. My first game: the Super Bowl with the Rams vs. Titans. It was an incredible game." -- Jorge Larrinaga 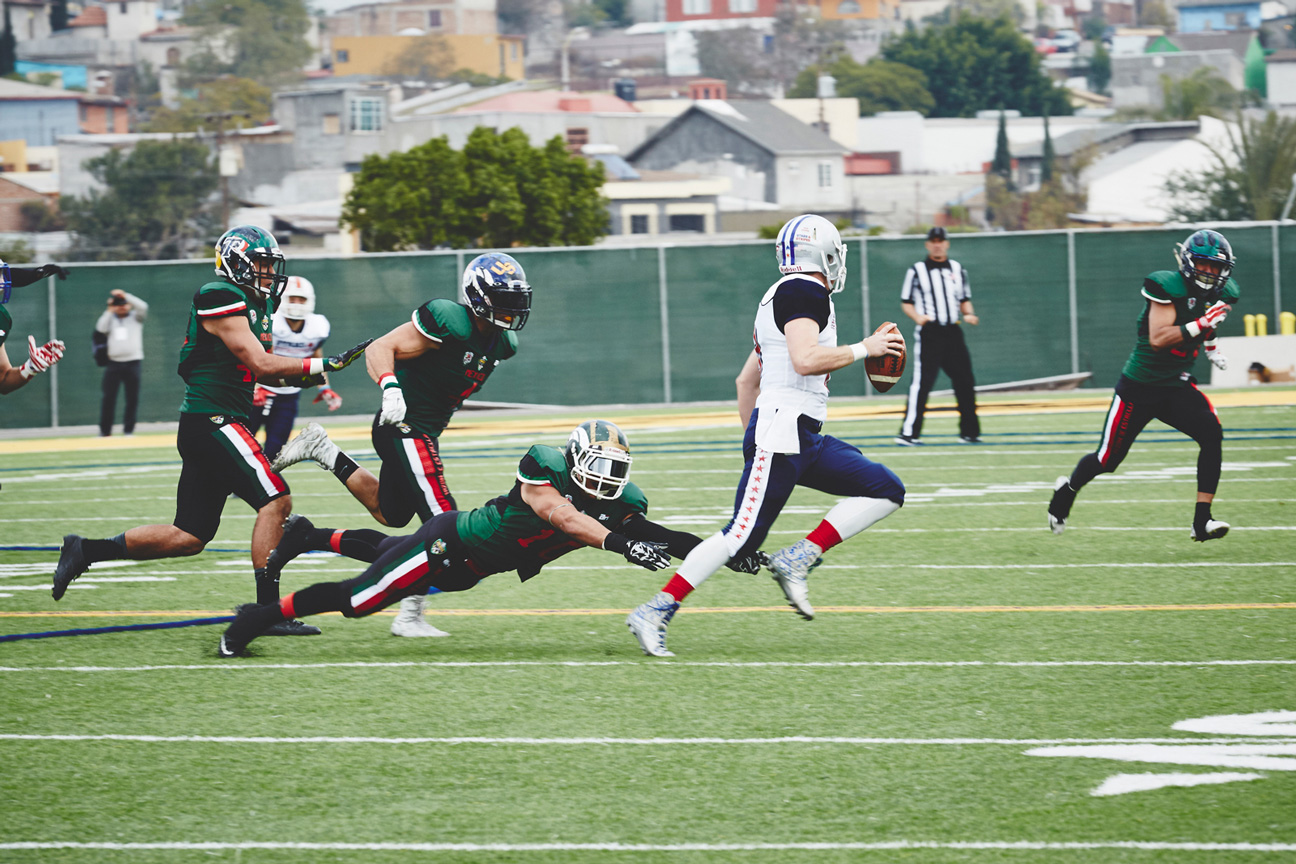 U.S. quarterback Brady Huber tries to escape pressure during the team's final offensive drive. He finds wide receiver George Vidas in the end zone, scoring a touchdown with 23 seconds left. "We won our last game at the last second. This is much more than a team, this is a family. They make me feel so proud," Huber said. 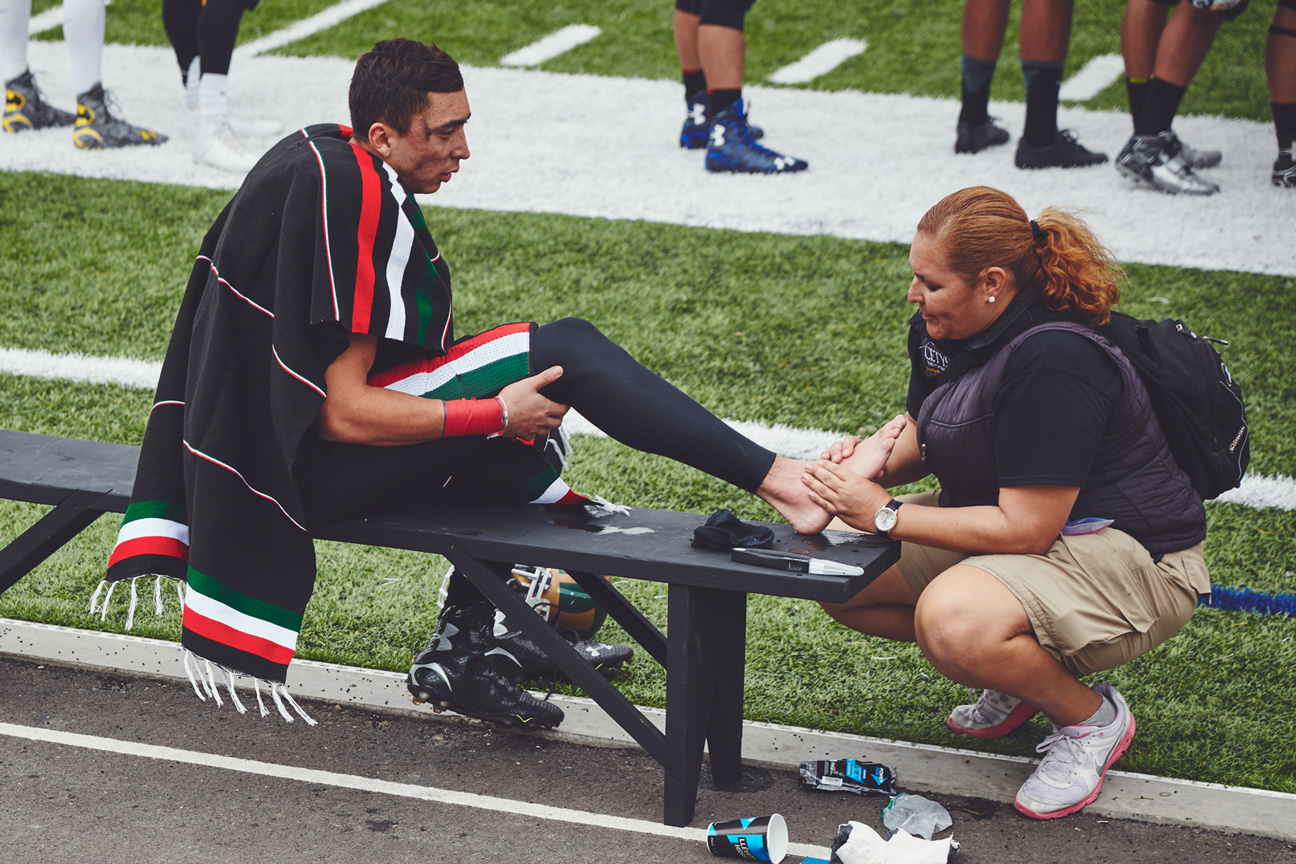 Mexican wide receiver Diego Yúñez gets his right ankle taped by a trainer in the third quarter. 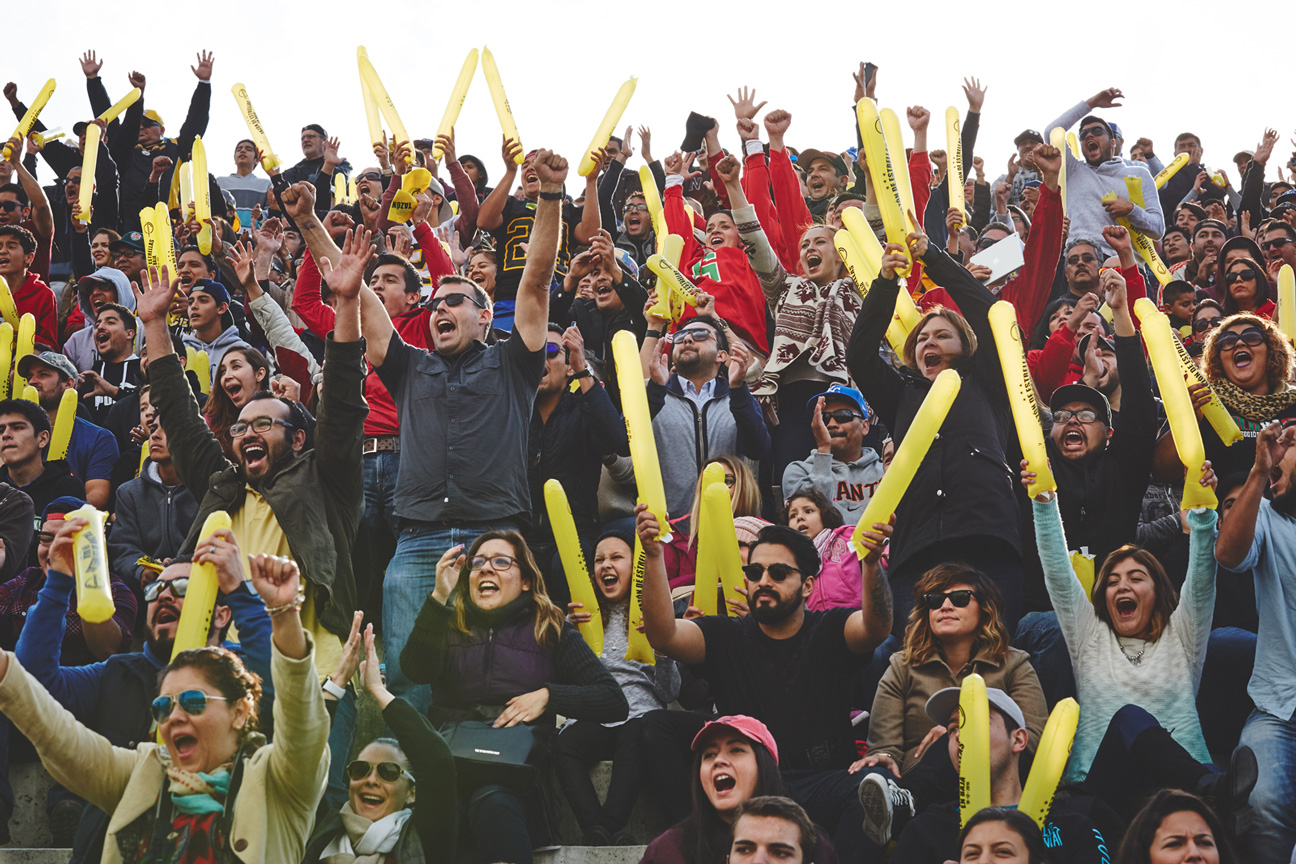 Mexico won the previous meeting between the teams 31-17, breaking the United States' two-game winning streak. Although the team may have lost this game, the thundersticks and face paint suggest Mexico's football fandom shows no signs of fading -- and has been around longer than you think. 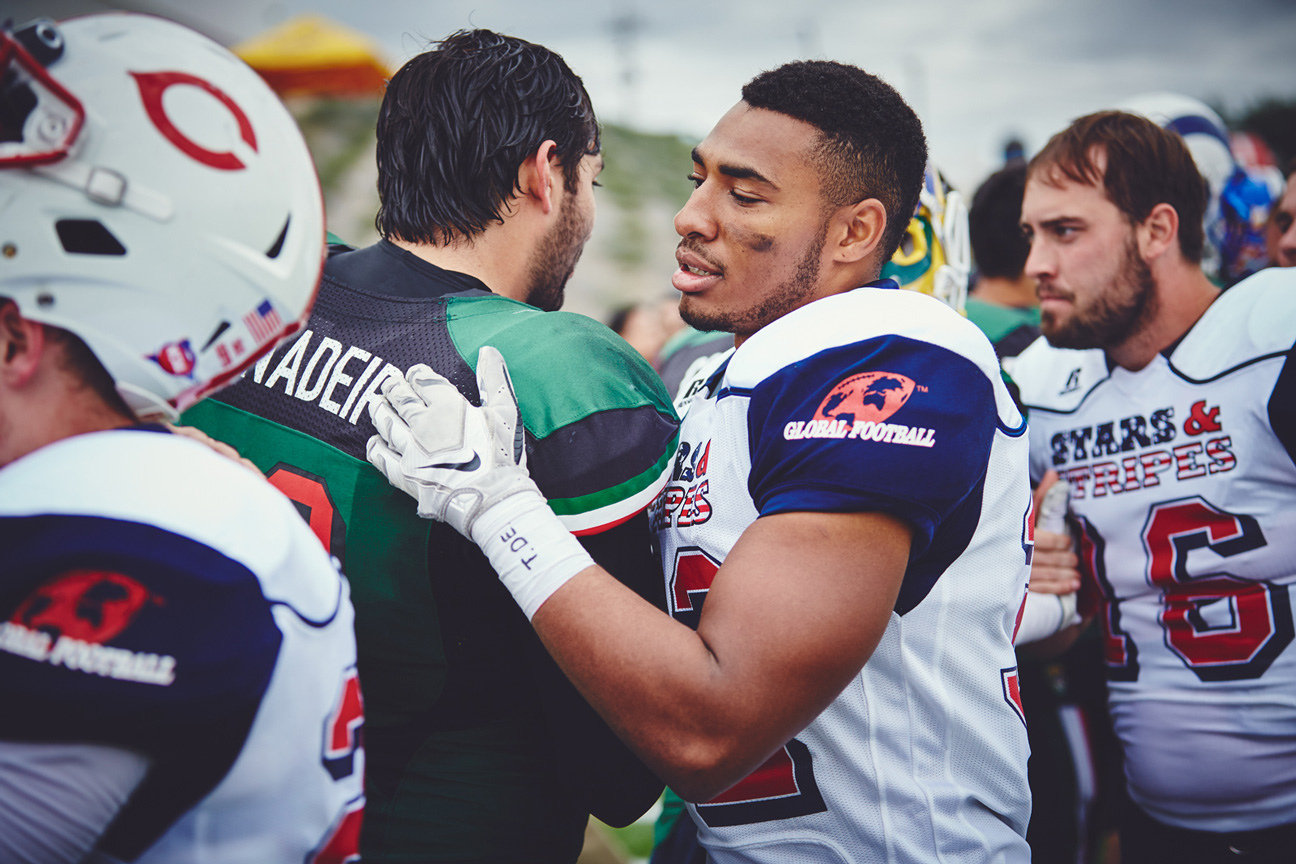 Mexico quarterback Norman Eduardo Contla Parra shakes hands with U.S. linebacker E.J. Edinburgh after the final whistle. Parra has three generations of football in his family. Says his mother, Ofelia Parra: "We always play with a full stadium," she says. "The passion for football is enormous."