ESA, Ariz. -- They traveled from as far away as Japan and Hawaii and Alaska. There was a dentist, a police officer, a high school teacher, a mattress salesman, a retired air traffic controller, a criminal lawyer, a general, a heavy equipment worker. There was a father and son, a husband and wife, two brothers, childhood friends and work colleagues.

For seven balmy days in January, they put their often-demanding lives on pause and escaped to their baseball utopia, the Oakland Athletics' newly renovated minor league facility. They donned an official major league uniform with their names on the jersey. They played a baseball game in the morning and then another one in the afternoon. They were fed and trained and treated like real major leaguers.

Part of the draw was an opportunity to rub shoulders with -- and test their skills against -- baseball stars they had long revered as fans, players such as Jose Canseco and Bert Campaneris and Mike Moore.

Dave Henderson Baseball Adventures has been operating A's and Seattle Mariners fantasy baseball camps for 17 years, but the 2016 camp was the first without its namesake. On Dec. 27, 2015, Henderson died from a massive heart attack at the age of 57.

Yet, less than three weeks later, the camp went on as scheduled. His death was still fresh on the minds and in the hearts of those who knew Hendu, with his unforgettable, gap-toothed smile and larger-than-life personality. Beyond his enviable baseball résumé, Hendu was everyone's friend.

"I'm missing Hendu the most," said David McLaughlin of Port Charlotte, Florida. "He had the most infectious smile you could ever have. It lit up the room. He remembered everybody."

For the 60 campers, ranging in age from 30 to 79 -- and the 11 pros serving as coaches -- Hendu remained a galvanizing presence at the Lew Wolff Training Complex. His No. 42 jersey still hung in his locker in the clubhouse. His video highlights were shown in the sports bar at the camp hotel each night. Campers and coaches laughed as they shared their favorite Hendu stories.

While the campers lived out their baseball fantasy, one Hendu had created for them, no one lost sight of his motto: "Always have fun."

"I'm feeling 17 again," said Bob Garvin of Lancaster, Pennsylvania. "The smell of the leather glove, the feel of the game ... I feel like I'm back in high school playing baseball, and you can't put a price on that feeling." 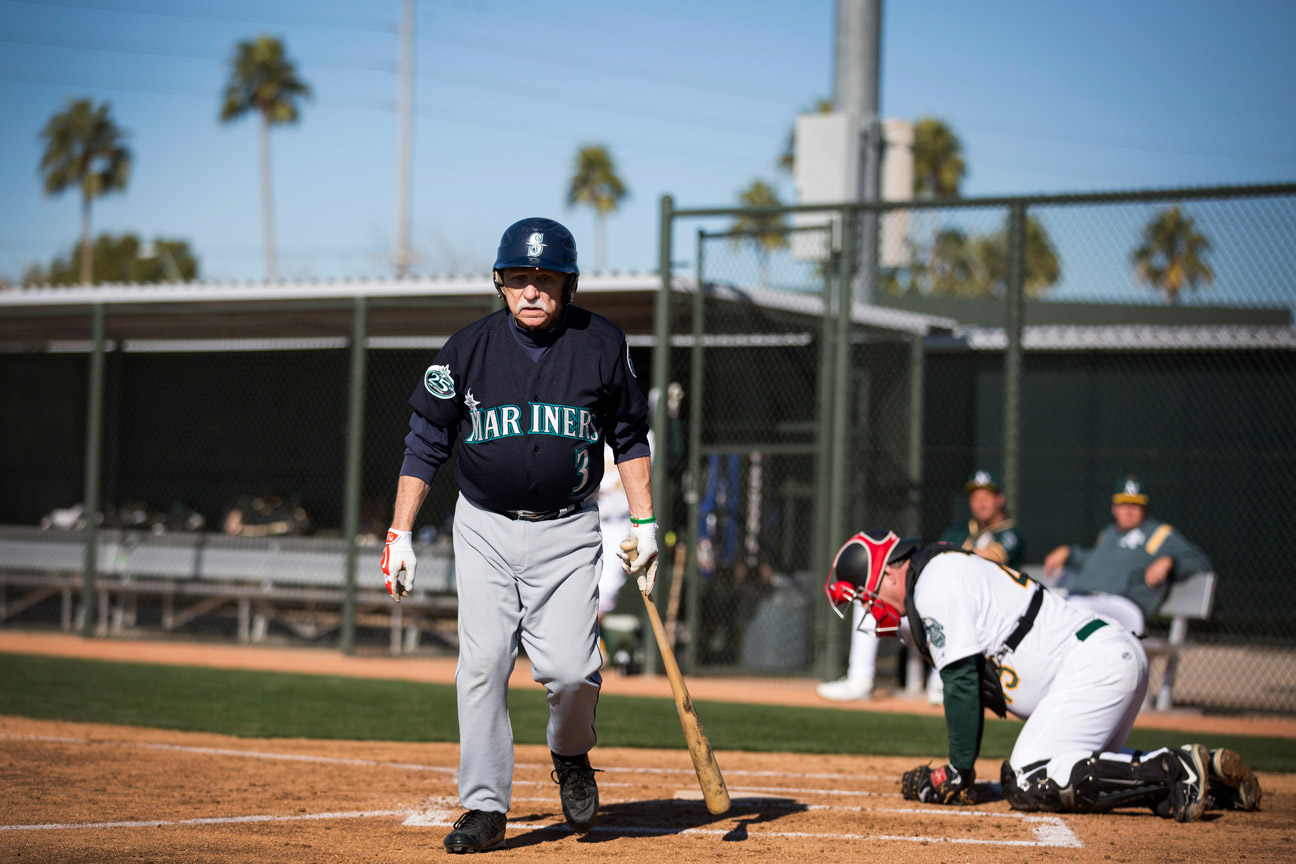 Jim Sterba of Maryville, Washington, heads back to the dugout after striking out. "You're never too old to play this game," said Sterba, 77. He sat out a few games after getting hit by a ball, but was back in action later in the week. 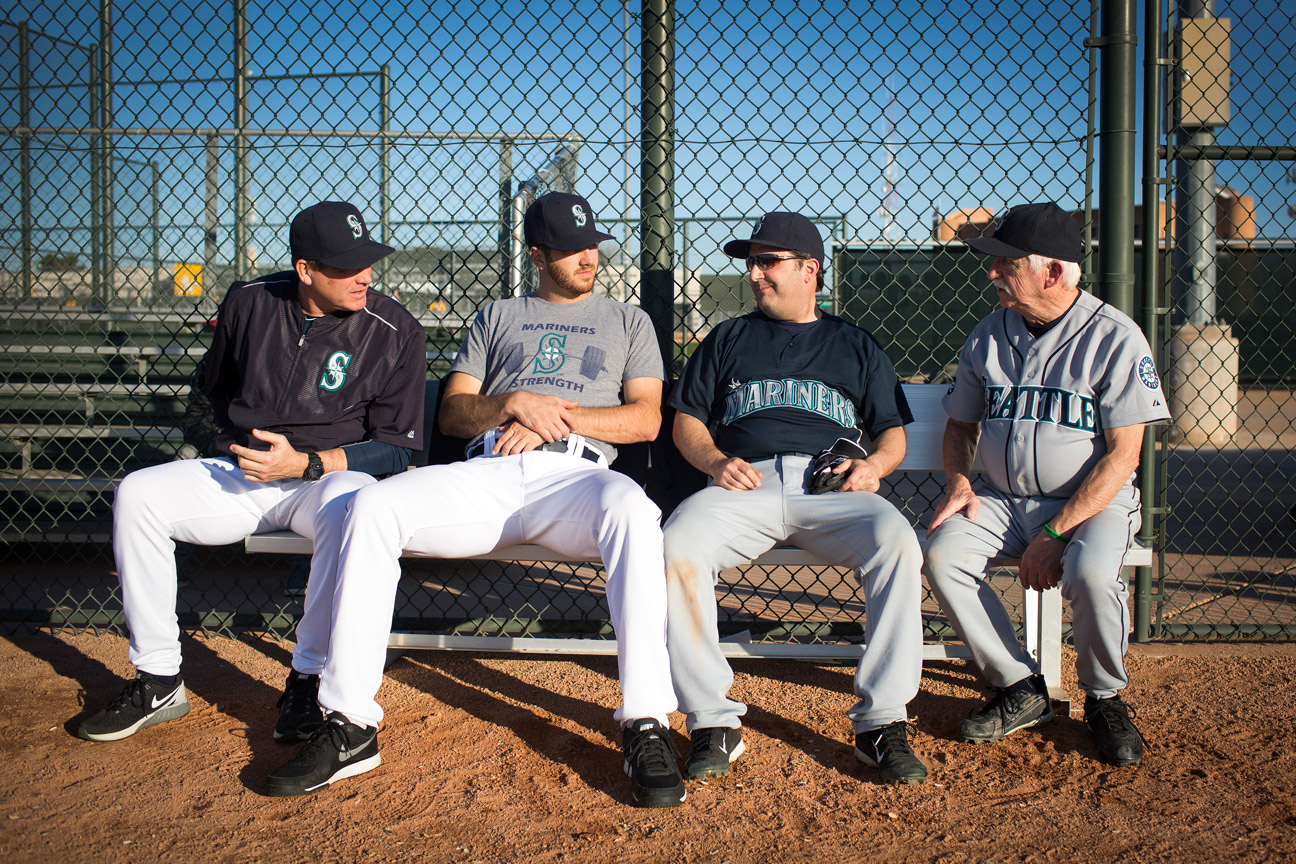 Former Mariners pitcher Brian Holman, far left, and his son, David, second from left, who pitches in Seattle's farm system, talk with Eric Burak of Cambridge, Ontario, and Jim Sterba during a game. The father-and-son duo teamed with former Mariners pitcher Gary Wheelock to coach the Sons-a-Pitches. Well, at least that was the original team name. Brian Holman ended up changing the team name several times until he finally dubbed his winless squad "The Grateful Dead." 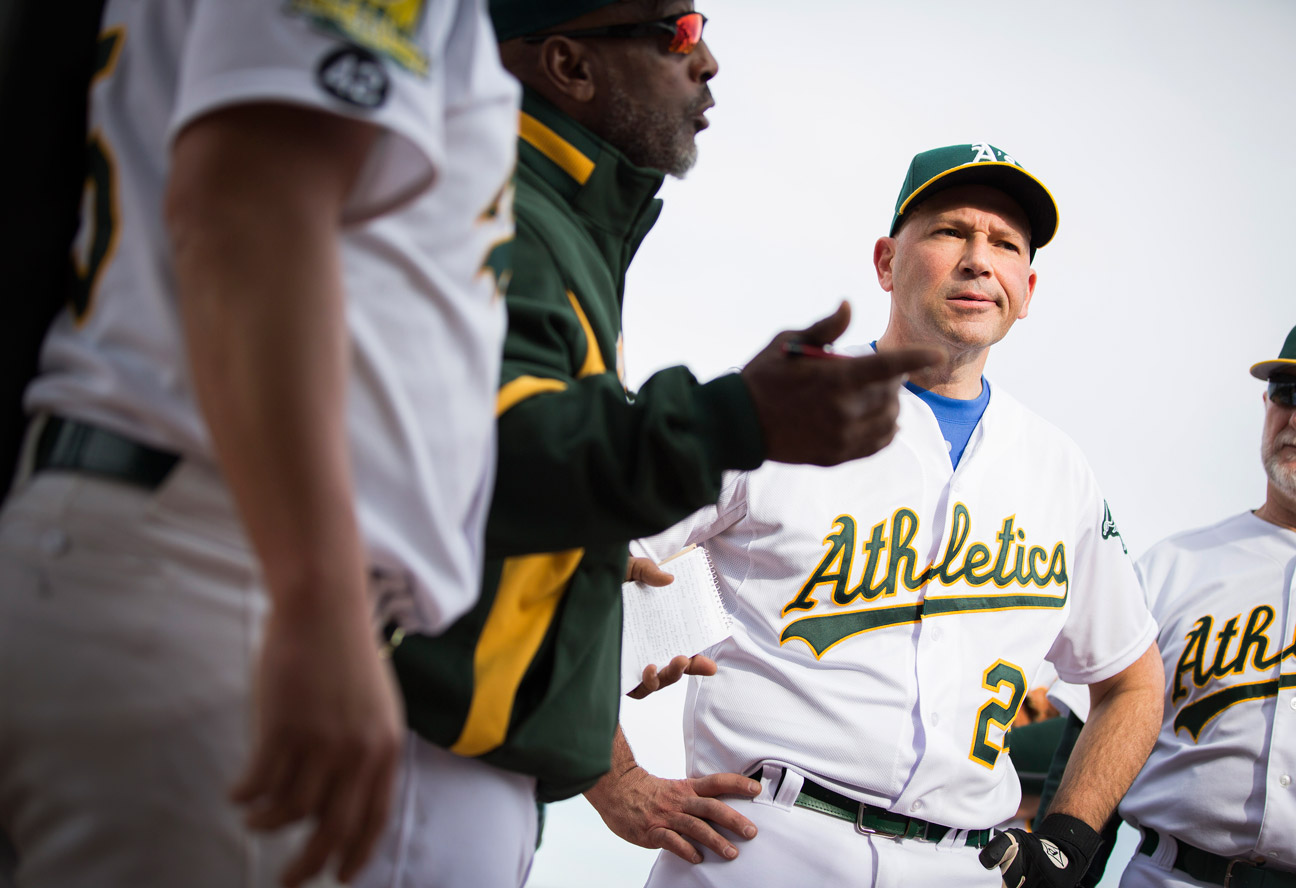 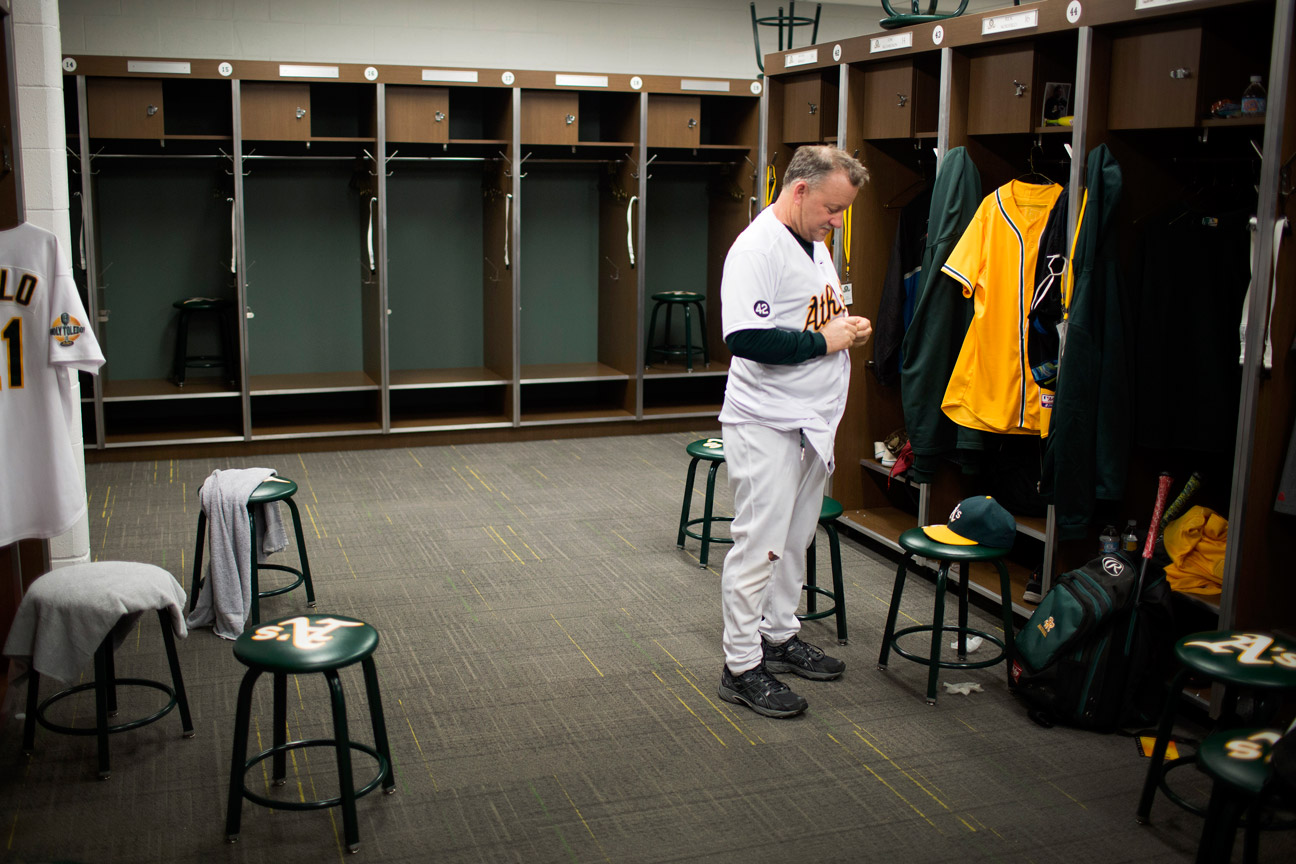 Dave Scola of Danville, California, seemingly has the clubhouse to himself as he buttons up his jersey. The campers, all staying in a hotel 10 minutes away, often arrived at the minor league complex before sunrise and left as the Arizona sun was setting after a long, rewarding day of games. 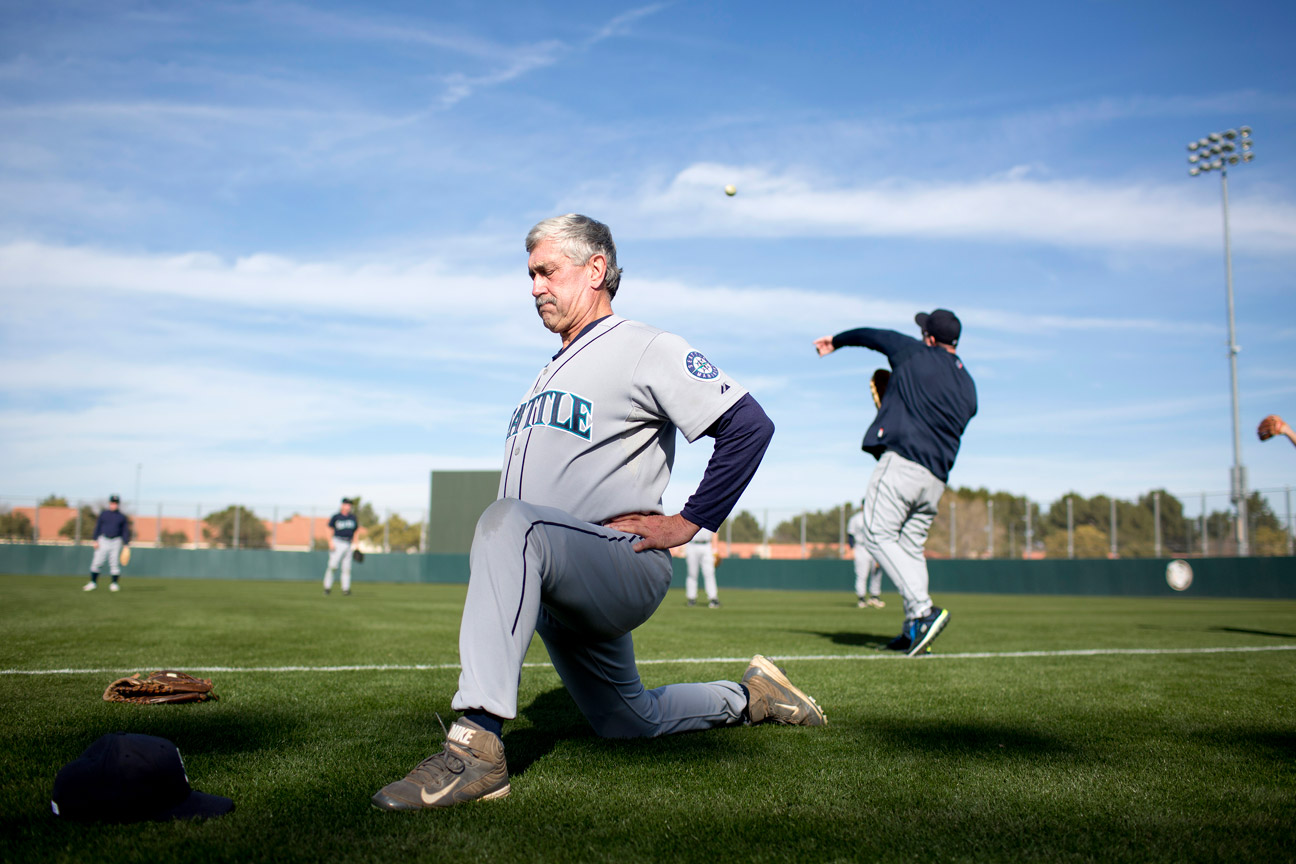 Camp director Mike Murphey stretches before the second full day of camp. "Murph" and his wife, Nancy, from Spokane, Washington, ran the camp with Henderson for years. "It's been an especially hard week this year," Mike Murphey said. "But there's a great deal of healing and laughter as well." His longtime friendship with Hendu was full of humor and mutual respect. One time, Murph recalled, Hendu invited him onto the field to throw out the ceremonial first pitch. "I never thought I'd meet someone who told me I was horses--- 14 different ways at baseball and go home feeling great." 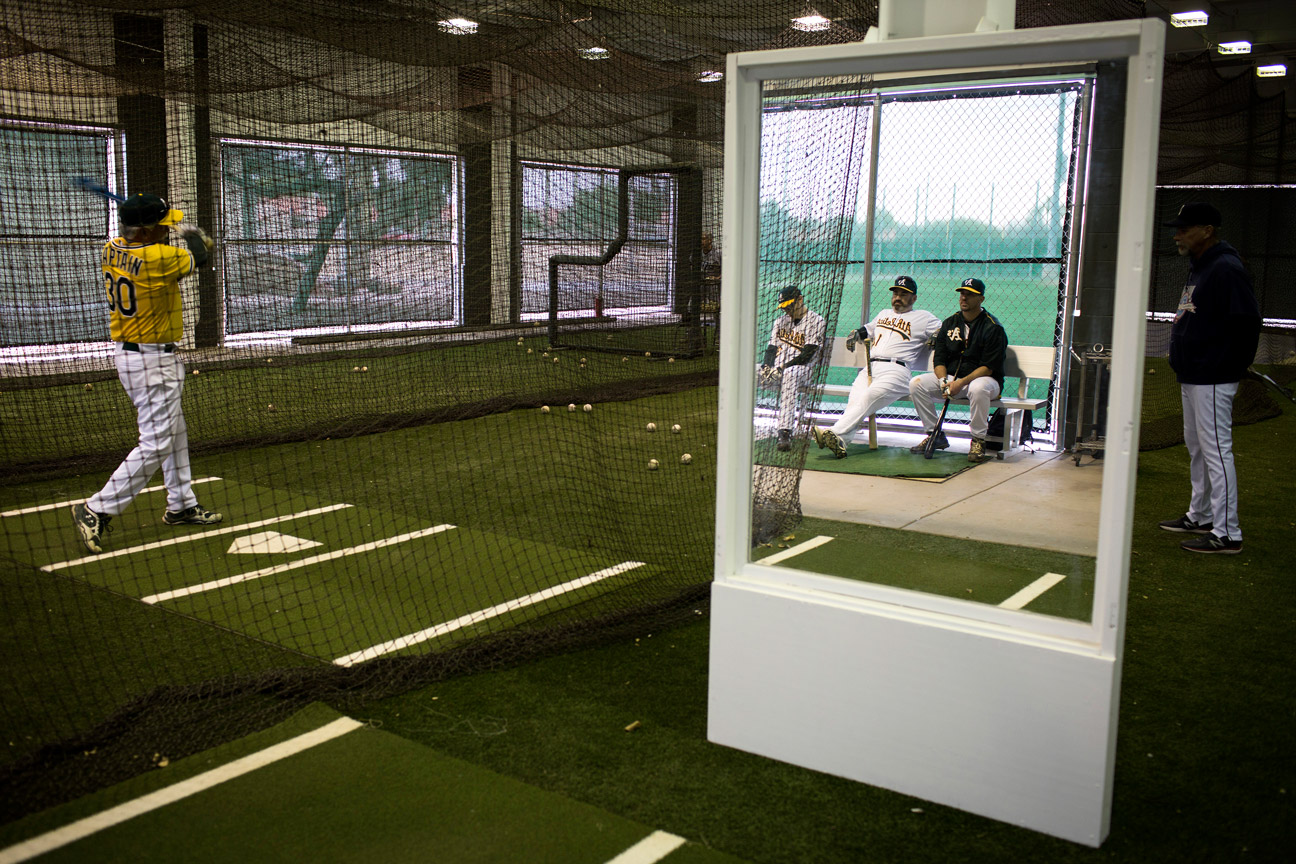 Paul Molkenbuhr, left, of Pleasanton, California, takes batting practice in the indoor cage while a few campers wait their turn. Observing on the far right is one of the camp coaches, former Mariners pitcher Keith Comstock. On the first day of camp, the players were shuttled in groups from one station to the next. The pros were able to assess the campers' overall baseball skills before drafting their teams for the week. The coaches, though, weren't impressed. "You all suck," Comstock jokingly told the players.

I’m feeling 17 again. The smell of the leather glove, the feel of the game ... I feel like I’m back in high school playing baseball, and you can’t put a price on that feeling.” 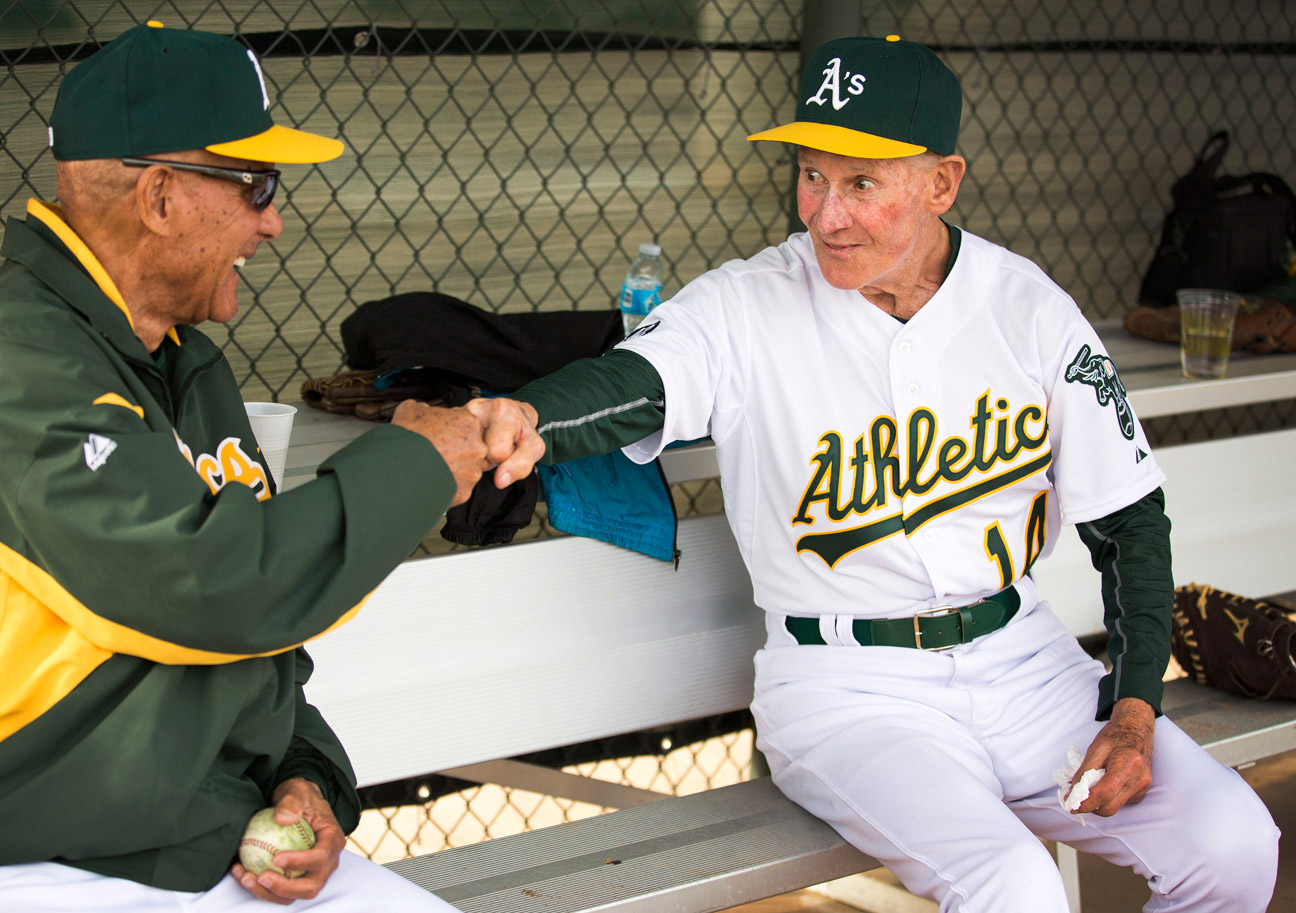 Oakland Athletics legend Bert "Campy" Campaneris, left, 73, gives a fist bump to the oldest camper, Tom Richardson, 79, of Foster City, California. Richardson has been playing ball as long as he can remember and tells stories of going to spring training in April 1956 to play in the Pirates' farm system. "I was introduced to Branch Rickey, who signed, you know, Jackie Robinson," Richardson said. 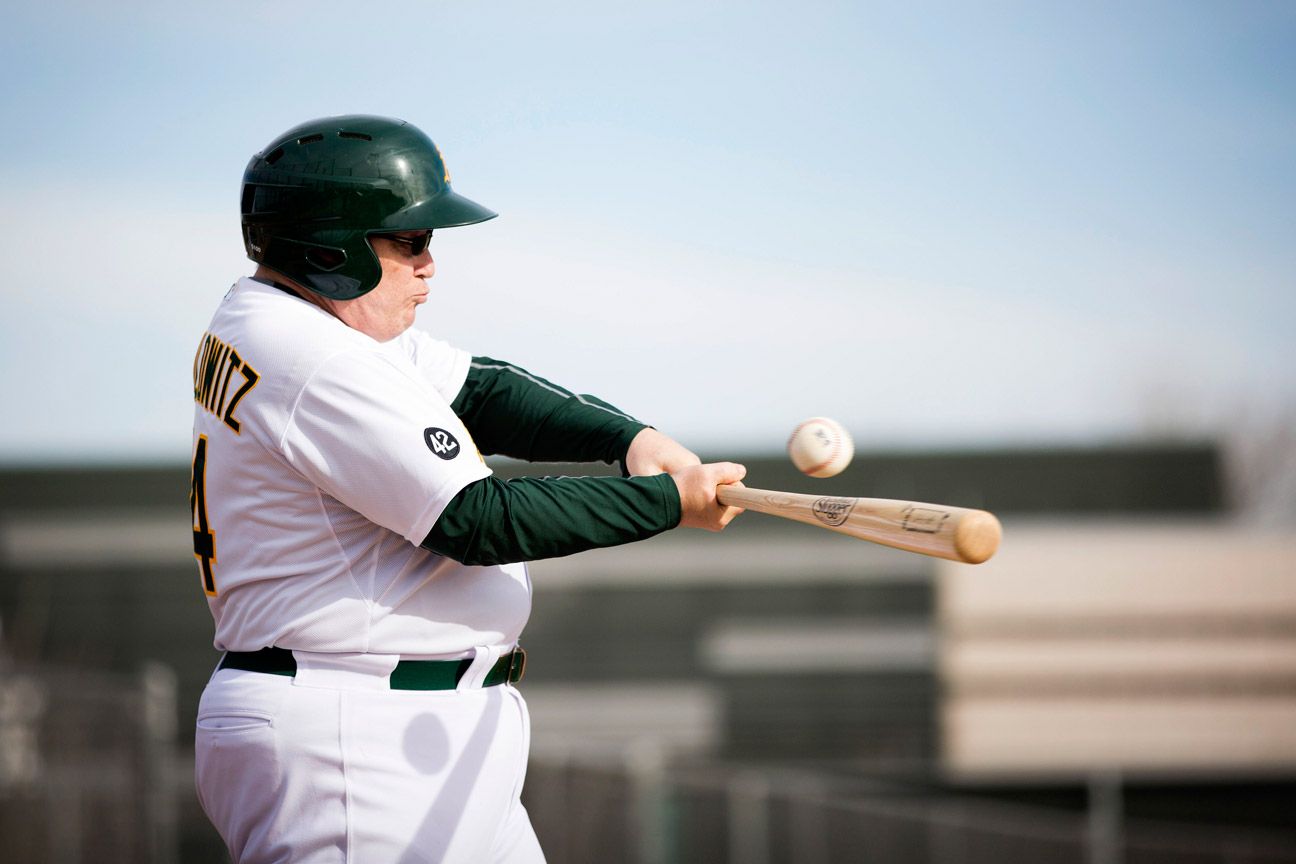 Douglas Srulowitz of Stockton, California, swings and narrowly misses a pitch during the first day of games. On their jersey sleeves, the players wore black patches with the No. 42 in honor of Hendu. 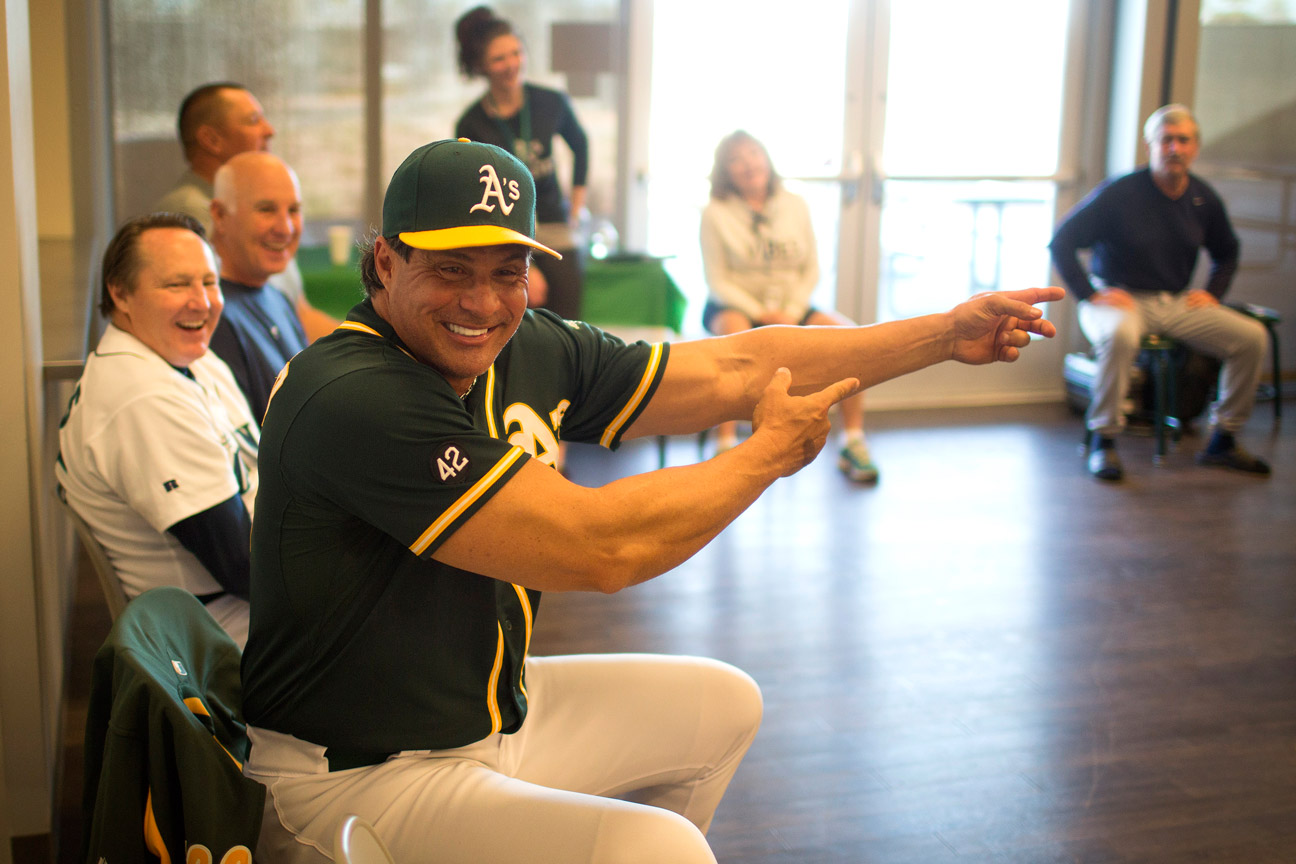 Former Oakland A's superstar Jose Canseco jokes around during Kangaroo Court, which was held each morning in the cafeteria. Players were brought up on charges, and fines were imposed for blunders, brain farts and other verifiable acts of stupidity from the previous day. No one was spared, and laughter, at the expense of each offender, echoed throughout the makeshift courtroom. 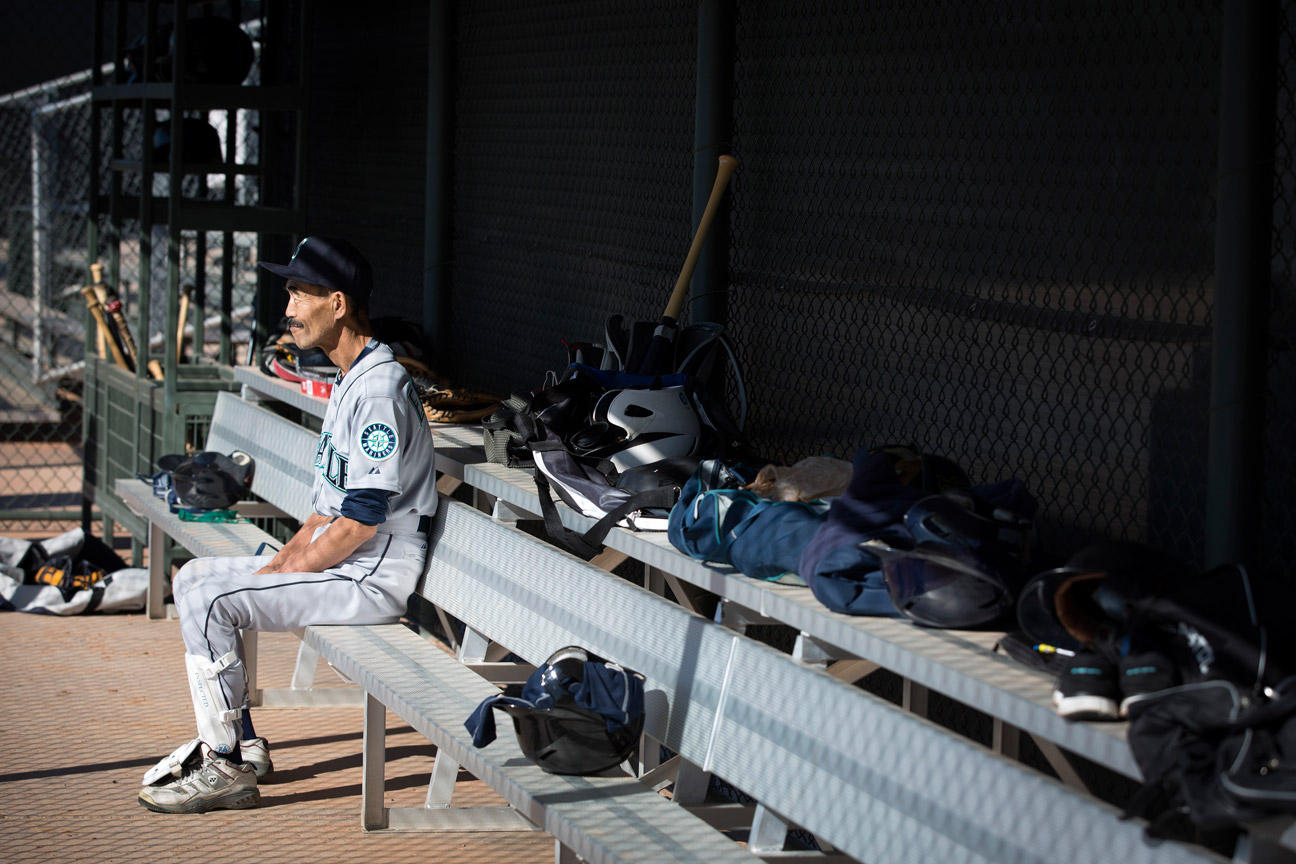 While players came from all over the United States, including Alaska and Hawaii, no one traveled farther than Kiyoshi Enomoto of Chiba, Japan. A baseball history wiz and great admirer of the sport, Enomoto smiled consistently throughout the week. "I like to talk about the baseball history and the relationship between the U.S. and Japan," Enomoto said. "American people accepted many Japanese players into the major league. I want to talk heart-to-heart to the major leaguers." He particularly connected with his coach, Keith Comstock, who pitched for the Yomiuri Giants in Tokyo and speaks some Japanese. 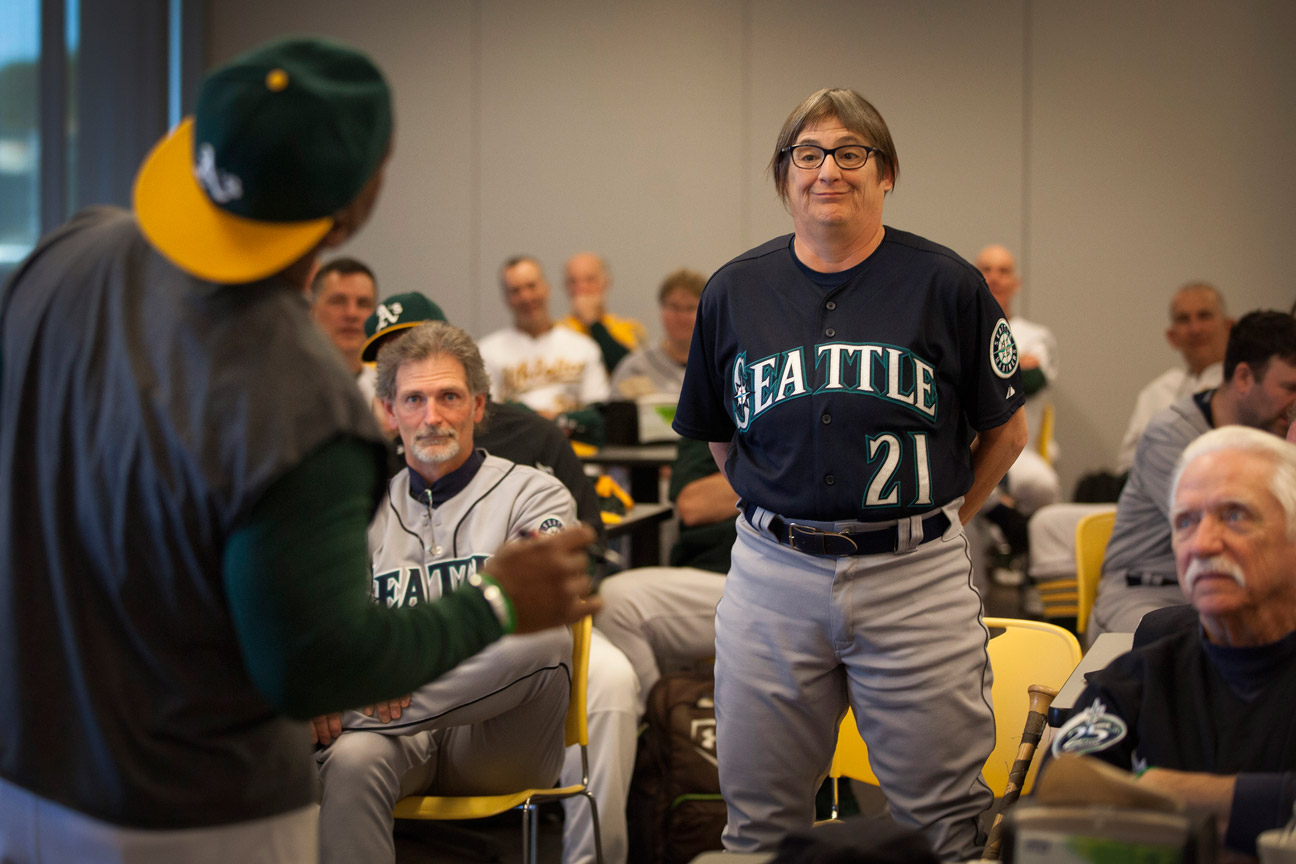 Shooty Babitt, who served as judge during Kangaroo Court, calls out Elisa Thomases of Seattle, one of five women in camp. A longtime lover of the sport, Elisa has baseball tattoos on each of her ankles. 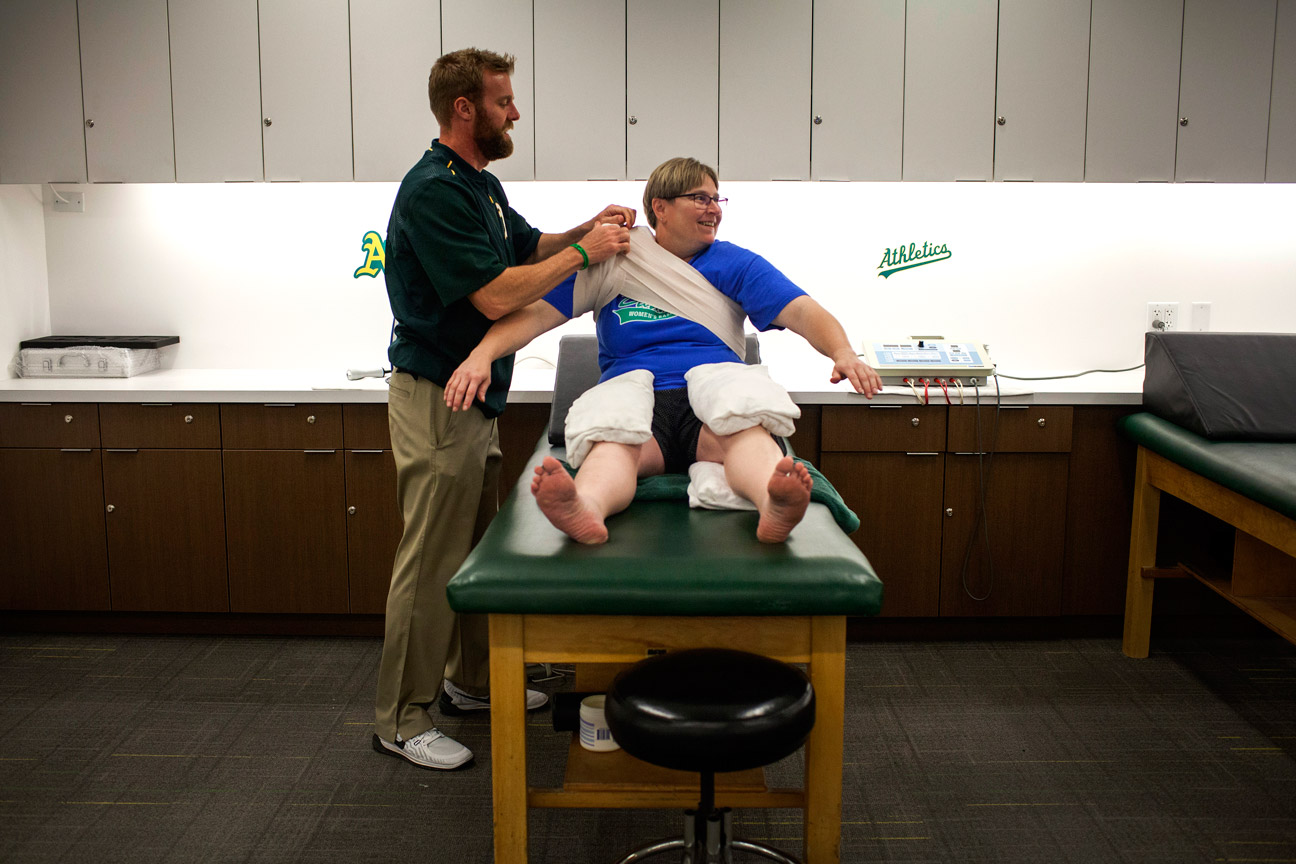 Oakland Athletics medical coordinator Jeff Collins tapes a bag of ice to Katrina Walker's shoulder after Monday's round of games and conditioning. The Everett, Washington, native was a member of the Sons-a-Pitches team. 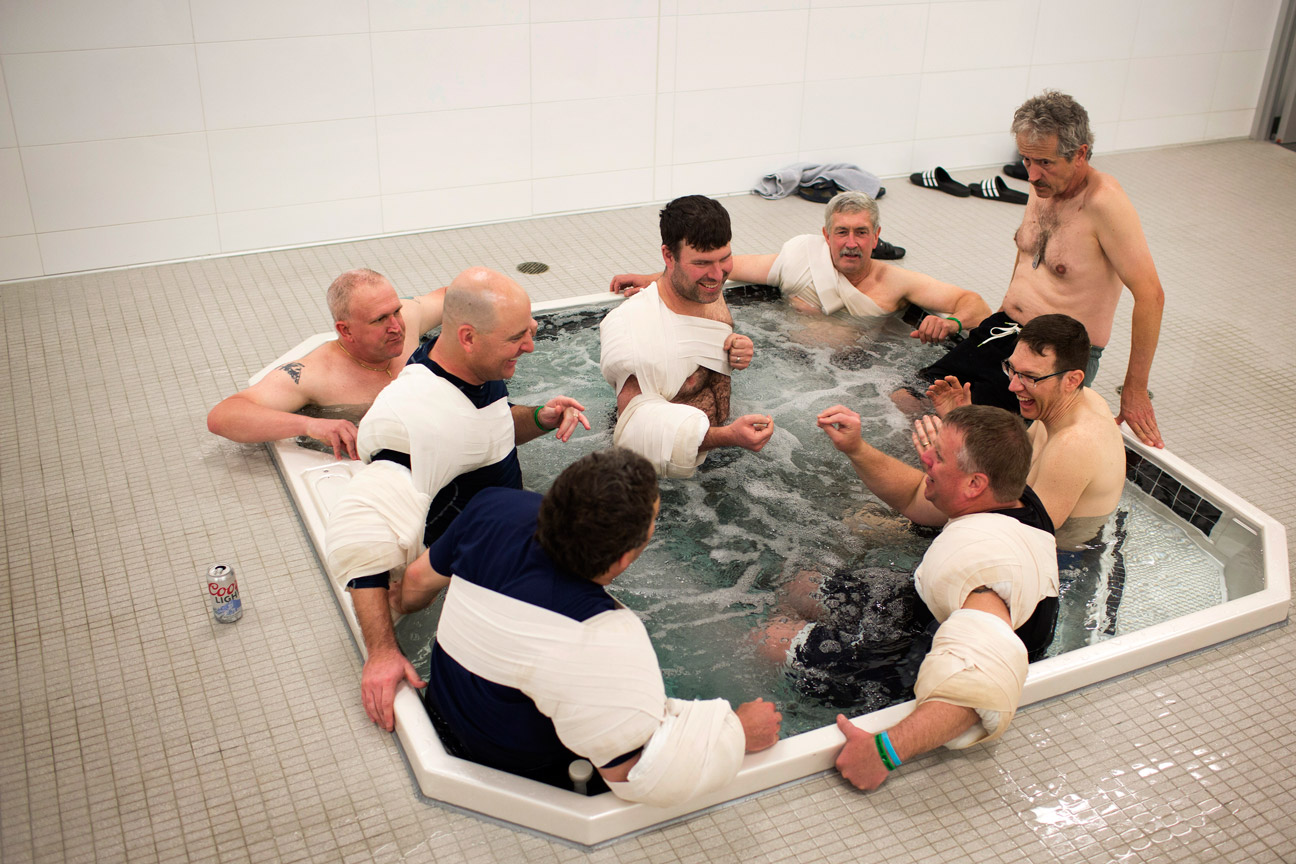 I saved up my pennies to get [to Mesa]. It’s an escape from reality -- just what it says. It's a fantasy to be here.” 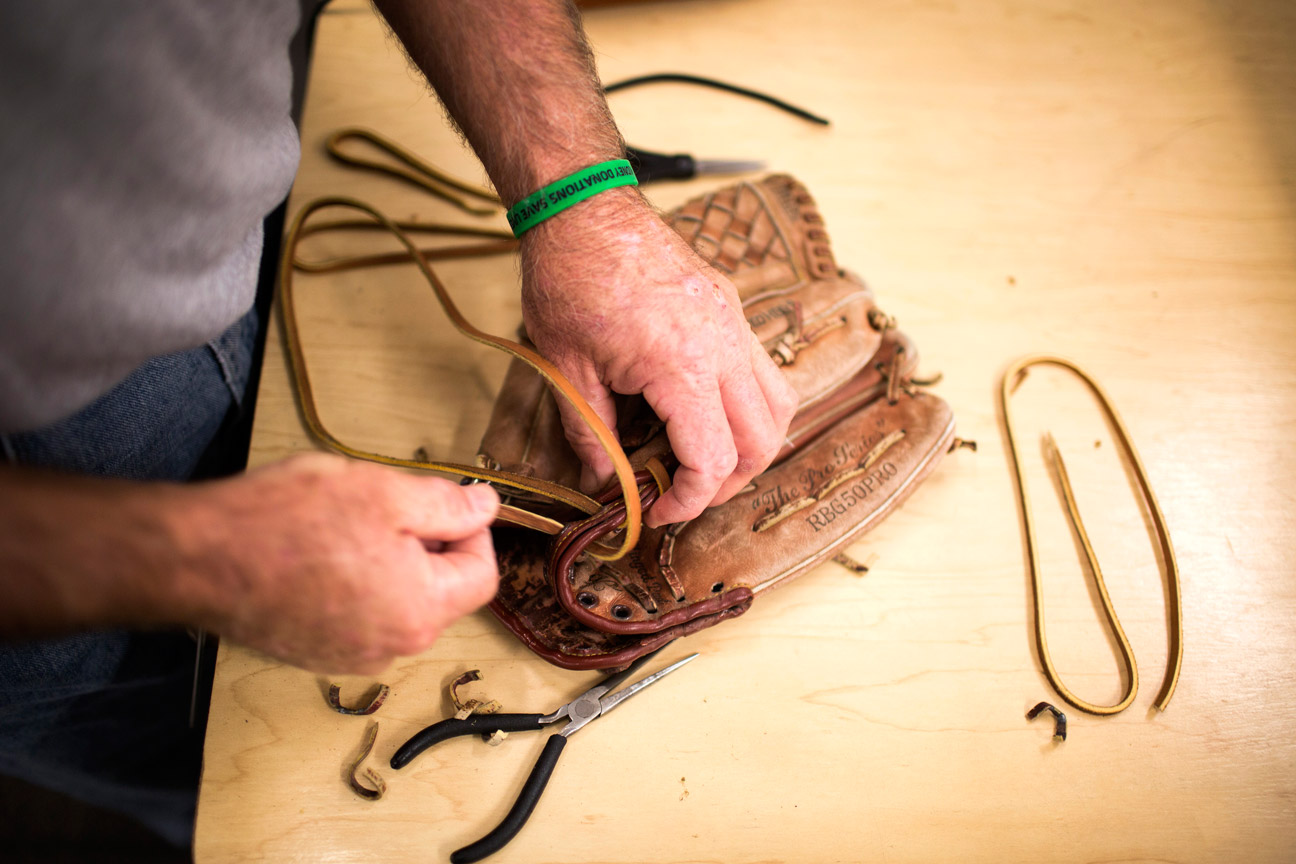 Dave "Mac" McLaughlin, a Boston native now living in Port Charlotte, Florida, re-laces Murphey's glove at the end of the day. McLaughlin spent an entire month fixing 135 gloves for his friends and teammates in Florida to save up enough money for the camp. "I saved up my pennies to get [to Mesa]," the heavy equipment operator said. "It's an escape from reality -- just what it says. It's a fantasy to be here." He fixed Hendu's glove three years ago, too. 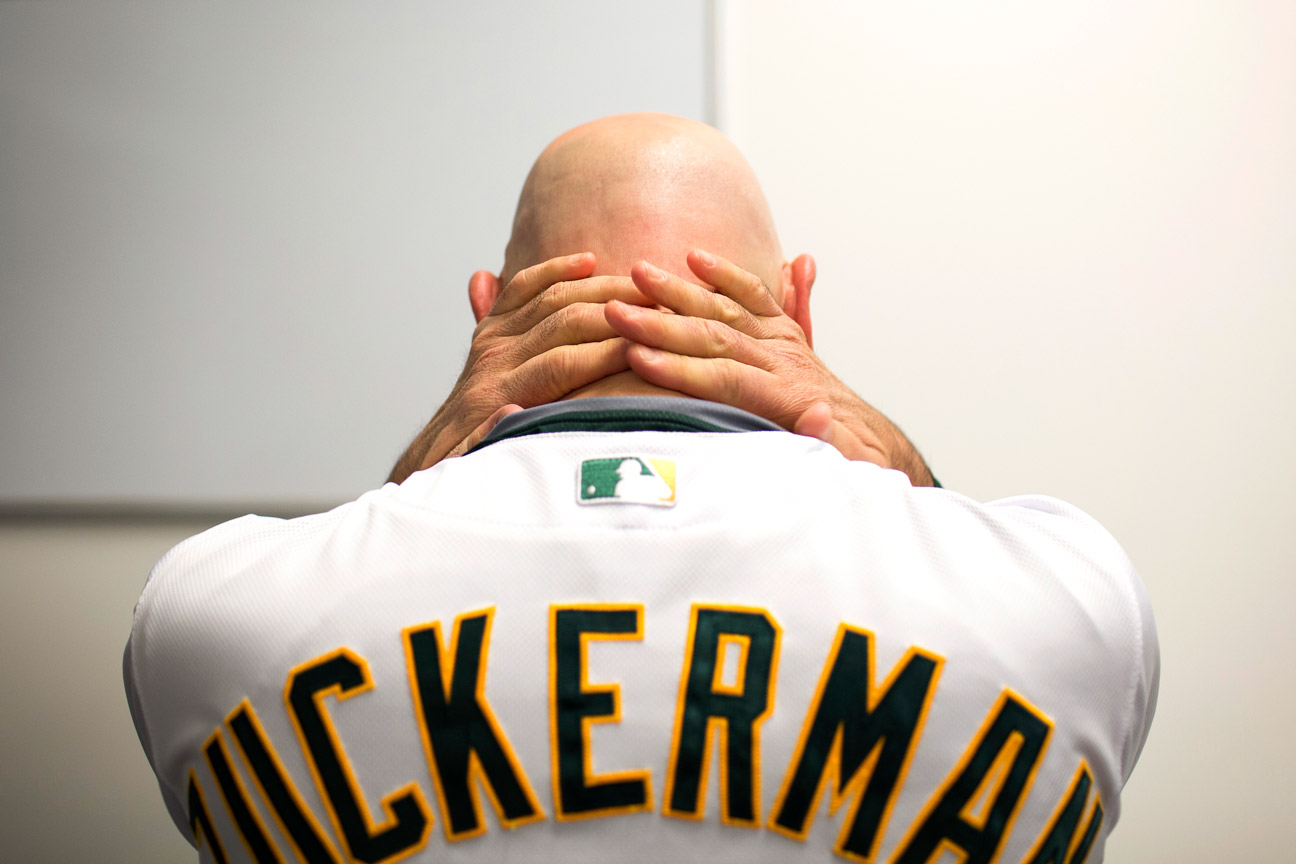 Bob Zuckerman applies sunscreen before stepping outside for another round of games. It might have been mid-January, but the weather was perfect for baseball all week, as temperatures ranged from the mid-50s in the morning to the 65-70-degree range in the afternoon. 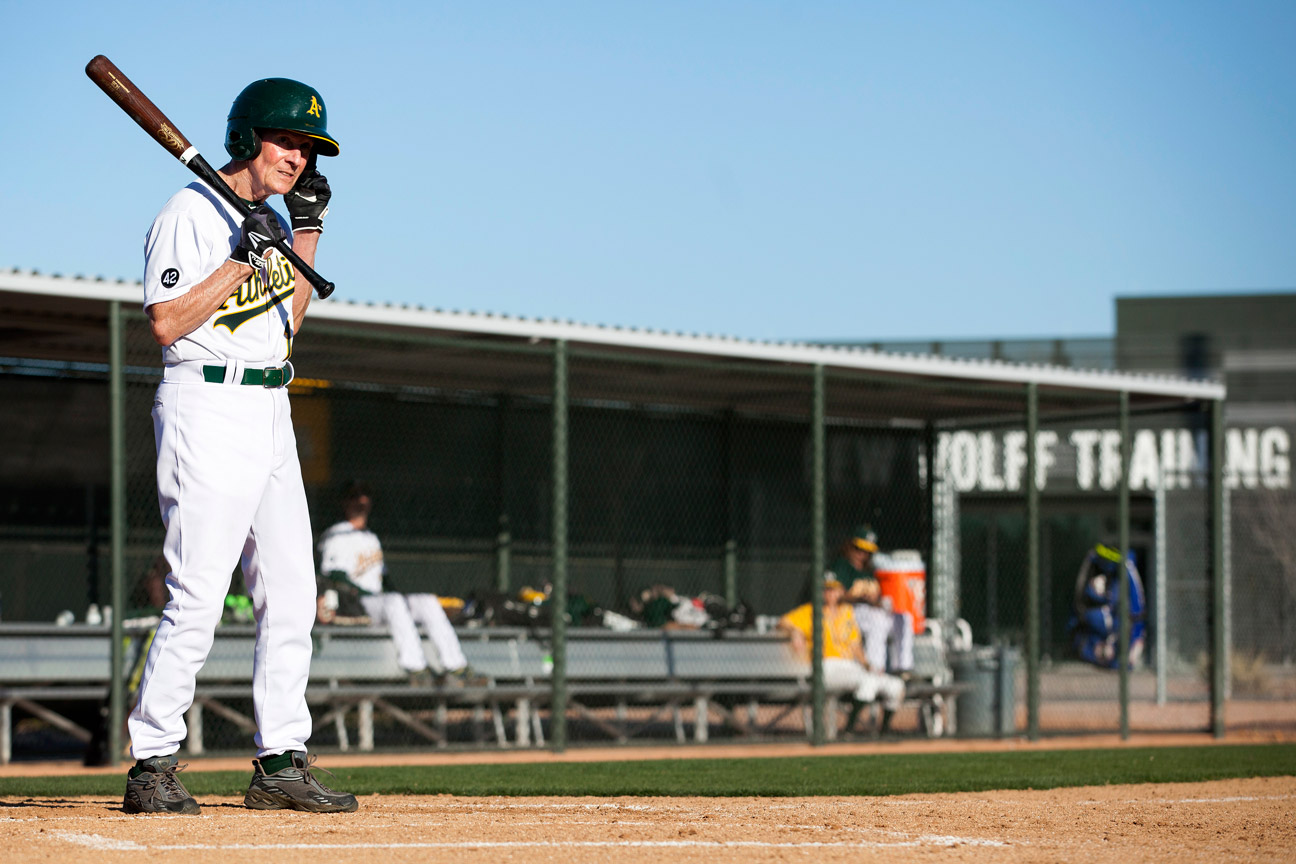 Richardson gets ready to hit during one of the camp games. When he was tired or needed a break, Richardson helped out as his team's first-base coach. 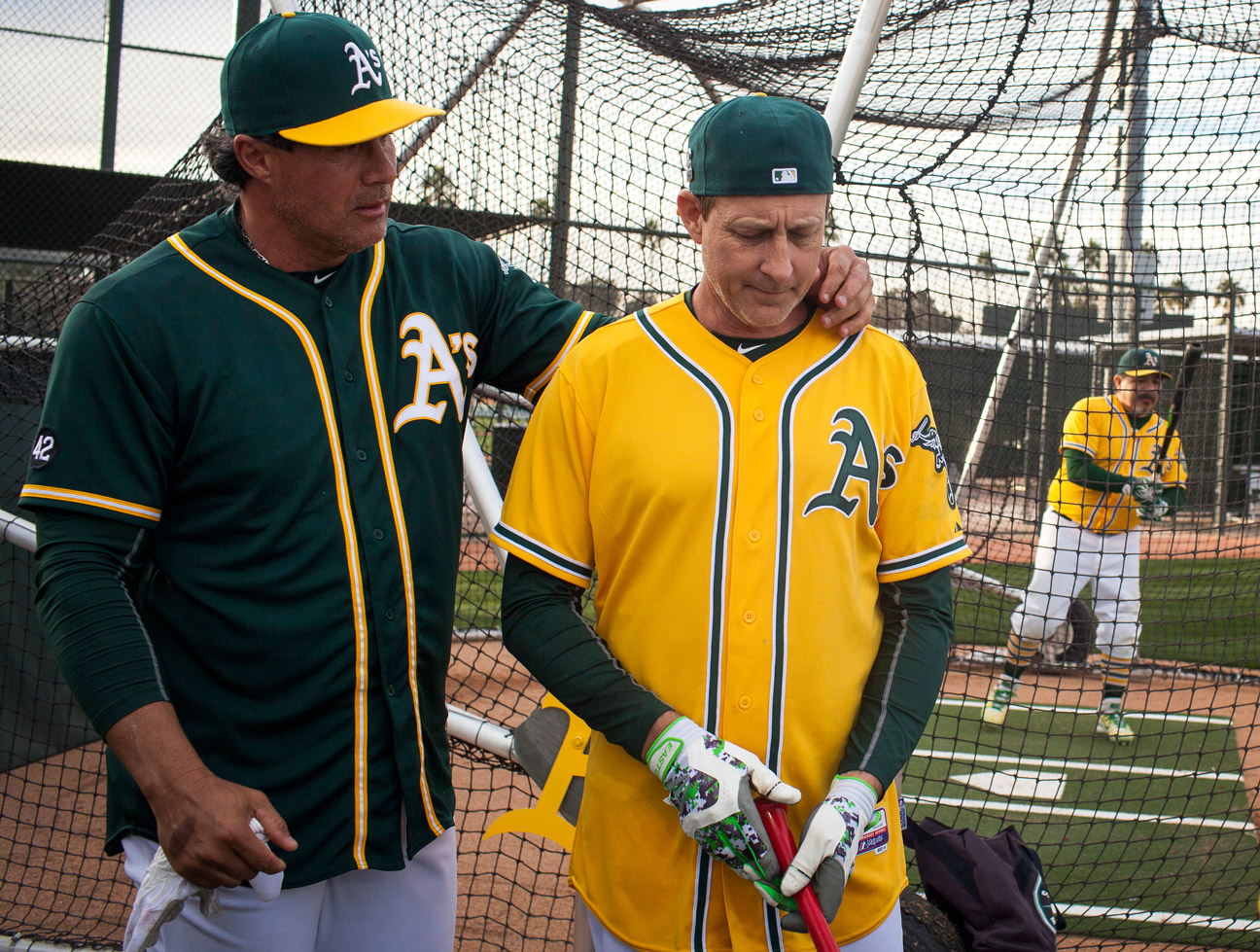 Canseco advises Joe Alexander, 49, of Albany, California, as Eddie Contreras, of Woodland, California, prepares to take his hacks during the camp's home run derby. Before coming to camp for the first time in 2011, Alexander hadn't played baseball for 30 years, since his parents divorced when he was 15. "We weren't going to have a camp where the players were separated from the pros," Murphey said. It was apparent that former pros like Canseco, participating in his first fantasy camp, were having as much fun as the camp's attendees. 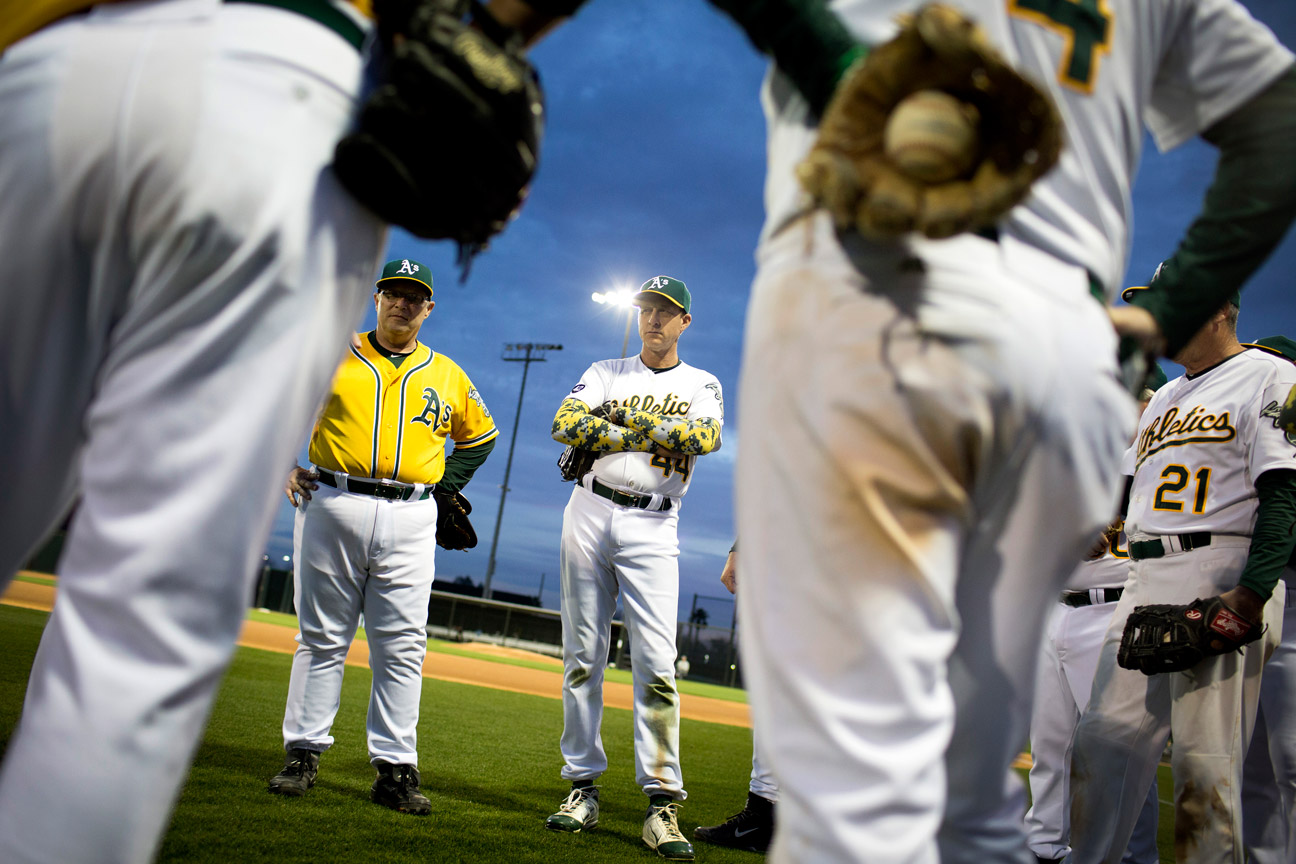 Douglas Srulowitz and Joe Alexander meet with their team, Multiple Scor-gasms, before they go head-to-head with Hitless in Seattle for the camp championship. Multiple Scor-gasms, coached by former A's pitcher Gil Heredia and Triple-A manager Tony DeFrancesco, was the top A's team in camp.

We’ve been texting, and [my phone] says, ‘Jose Canseco.’ It's so surreal. We golfed together on the first day, and he was in my cart. He’s been so cool.” 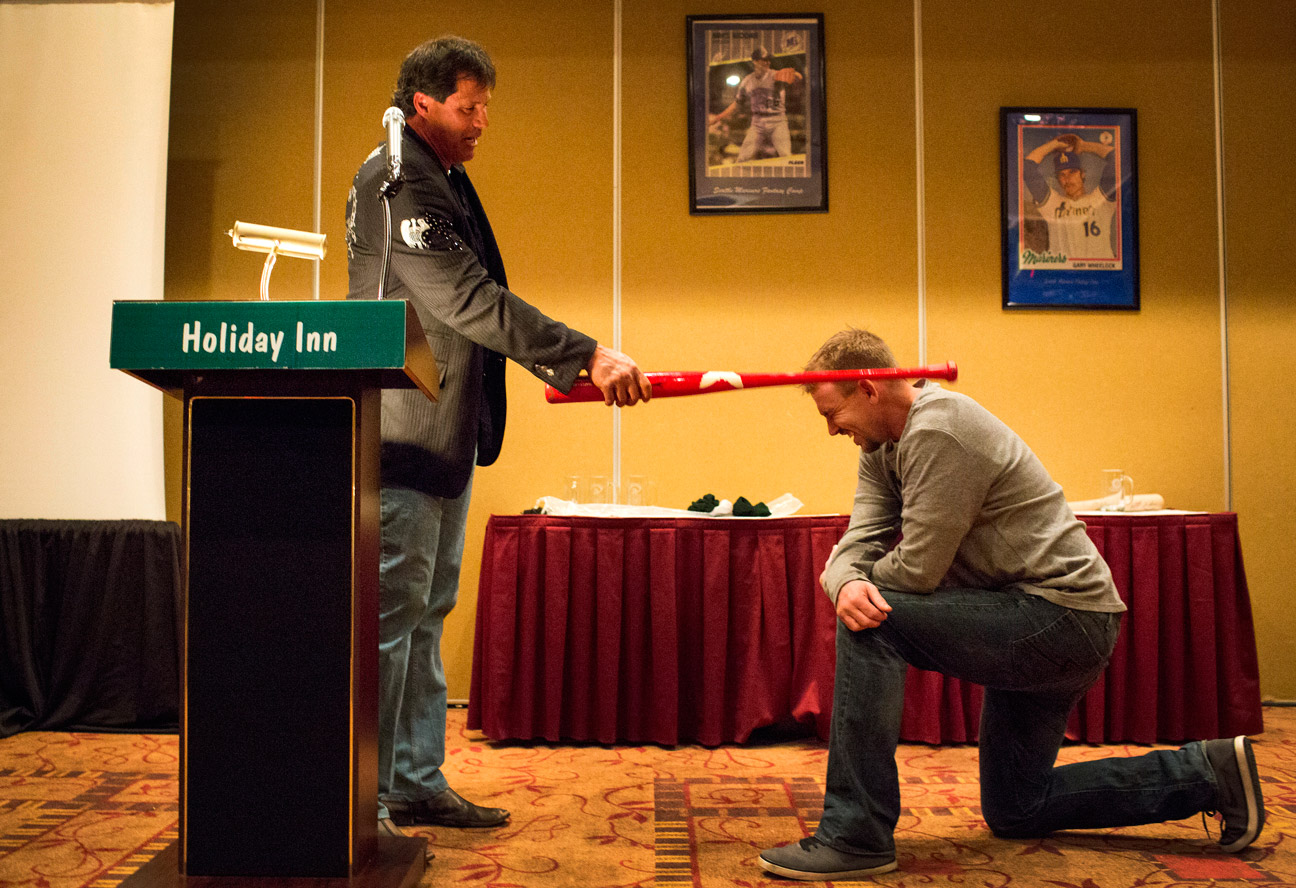 Canseco knights Steve Biggs of Douglas City, California, and gives him a signed bat for beating him in the camp home run derby. Biggs, who played on Canseco's team (Team Juiced) and was the former A's slugger's shadow all week, had Oakland season tickets from 1988-90 and idolized Canseco. "We've been texting, and [my phone] says, 'Jose Canseco.' It's so surreal. We golfed together on the first day, and he was in my cart. He's been so cool," Biggs said. Canseco also awarded his camp jersey to Biggs. 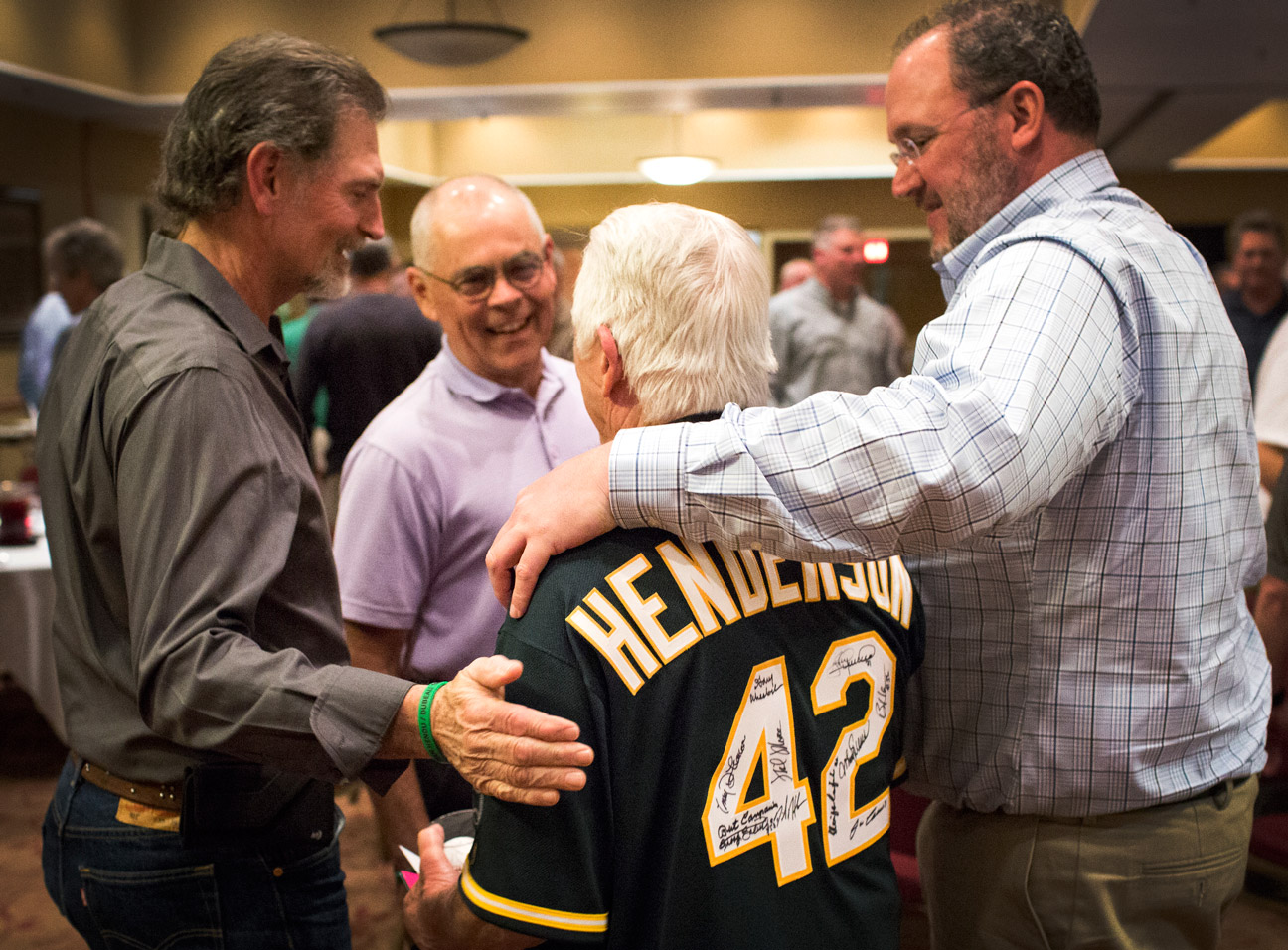 At the end of the camp, the pros each gave their jersey to one player. This being the first camp without Hendu, the pros voted on the player to whom Henderson would have given his No. 42 jersey, and they awarded it -- the camp's highest honor -- to Jim Sterba. Fellow campers, from left, Terry Lockhart, Jon Westmoreland and Matt Stannard were quick to congratulate Sterba, center. 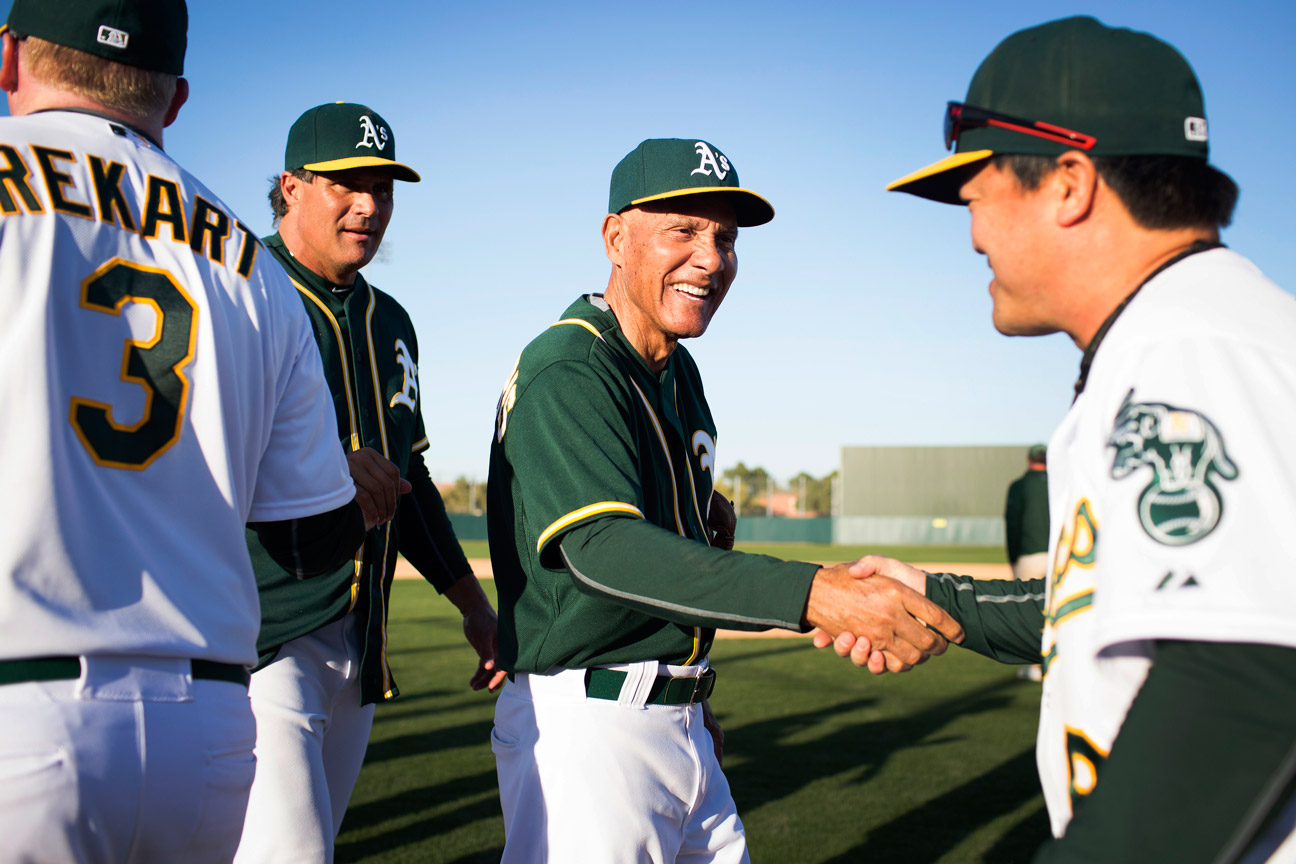 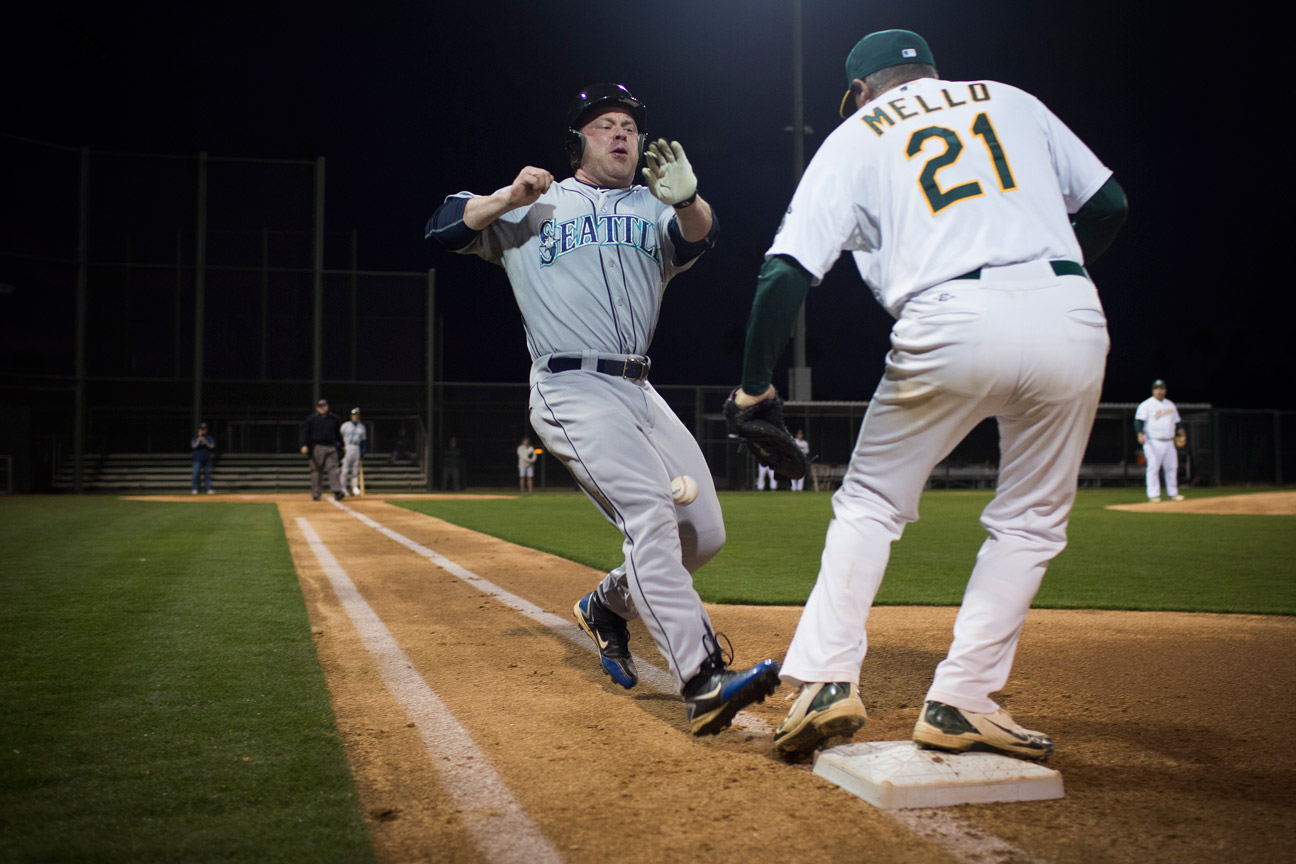 Mike Mello, right, of Antioch, California, attempts to tag out David Molen of Auburn, Washington, at first base during the championship game between the top Mariners team (Hitless in Seattle) and the top A's team (Multiple Scor-gasms). 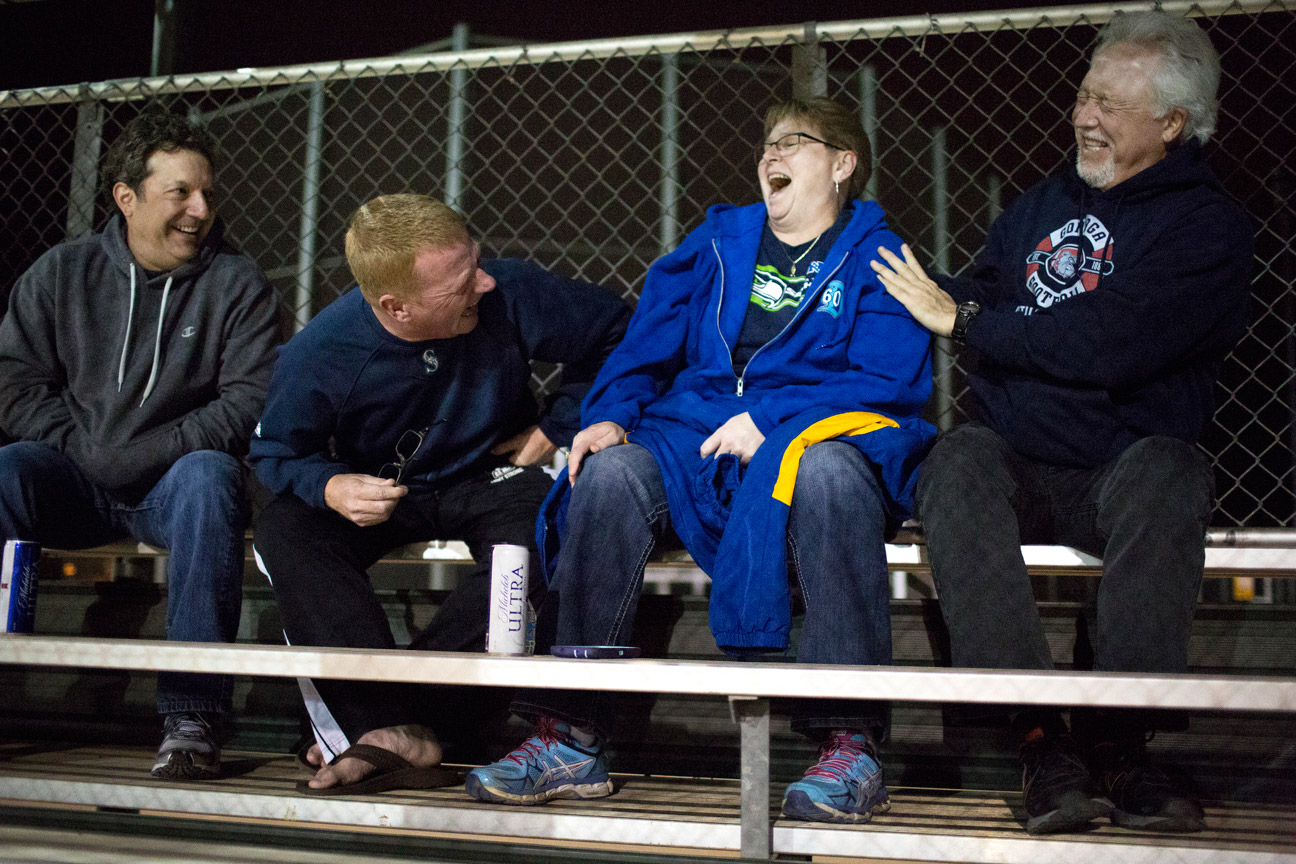 Sons-a-Pitches teammates, from left, Eric Burak, Craig Freshour, Katrina Walter and Robert Christilaw share a laugh as they watch the camp championship game. "We haven't won a single game," Christilaw said. "But we lead the camp in laughter, and that's priceless." 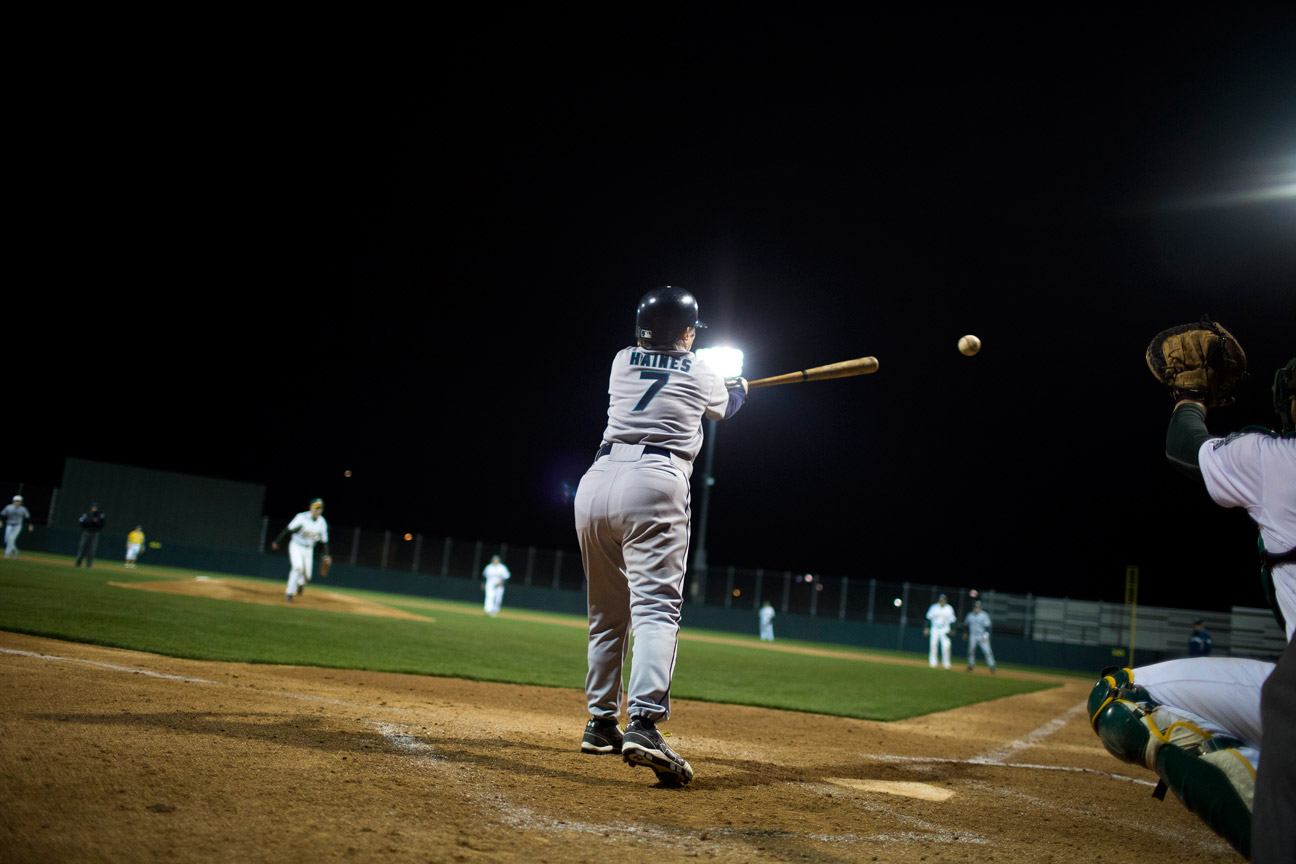 Alice Haines of Casa Grande, Arizona, reaches out in an effort to make contact with a high pitch during the camp championship game. She was joined on the team by her new husband, Autie Scaggs. 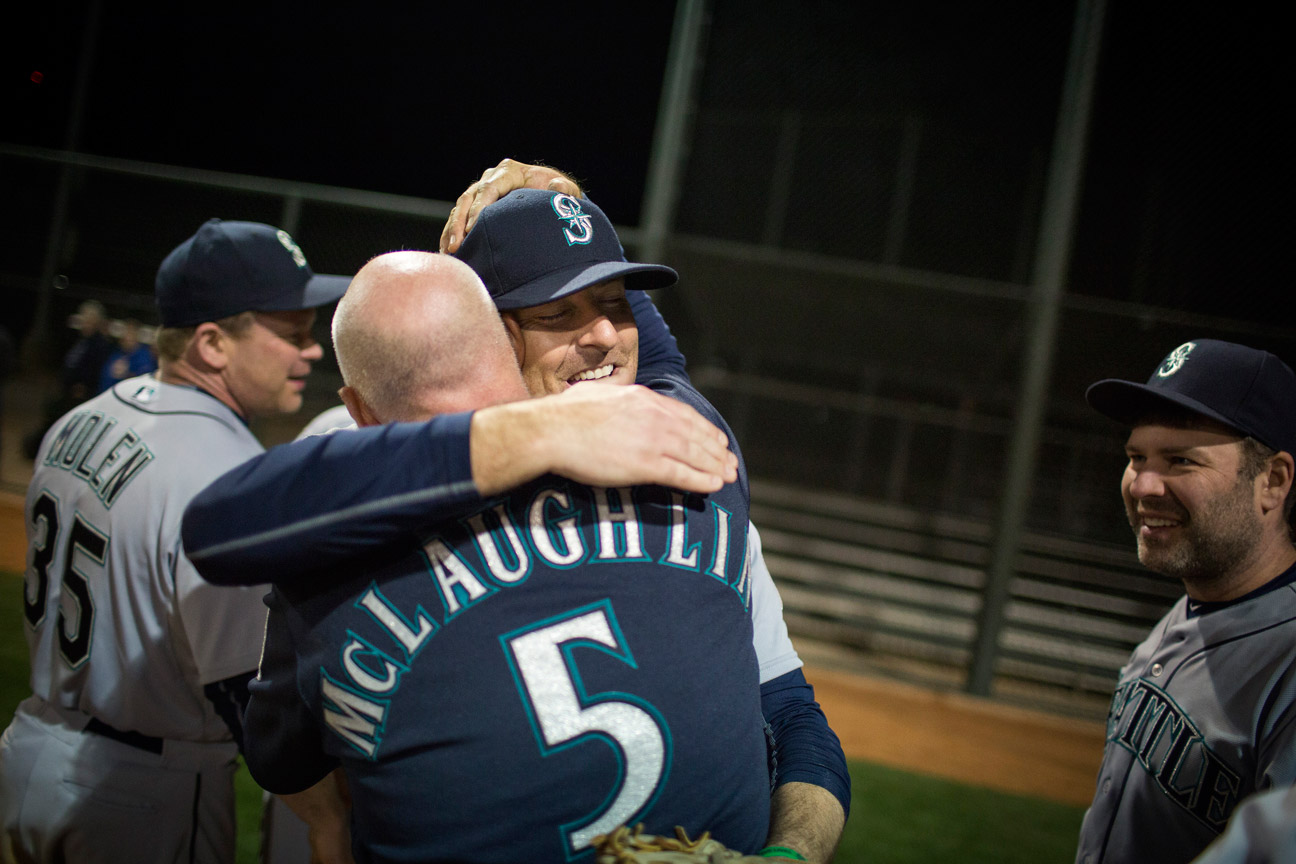 "Mac" McLaughlin embraces pitcher Sean Christiansen after Hitless in Seattle held off a late rally by Multiple Scor-gasms to win the championship game 4-2. 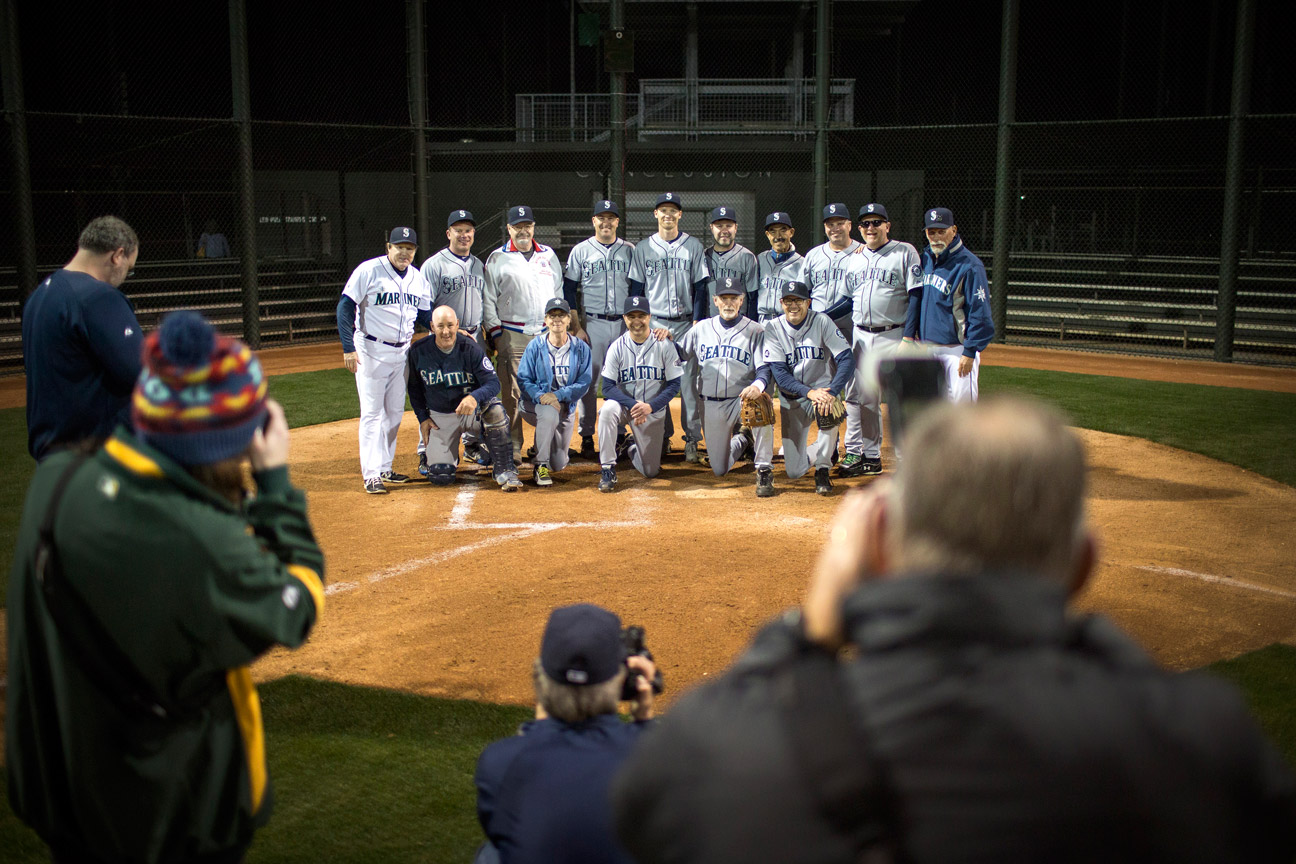 Hitless in Seattle poses for photos after winning the camp championship. It was the culmination of a long day for the team, coached by former Mariners Keith Comstock and John Moses, which needed to win three games on the final day. Later, Comstock, who could moonlight as a stand-up comedian, commended both teams for their performances in the championship game. "It actually looked like a real game," he said. 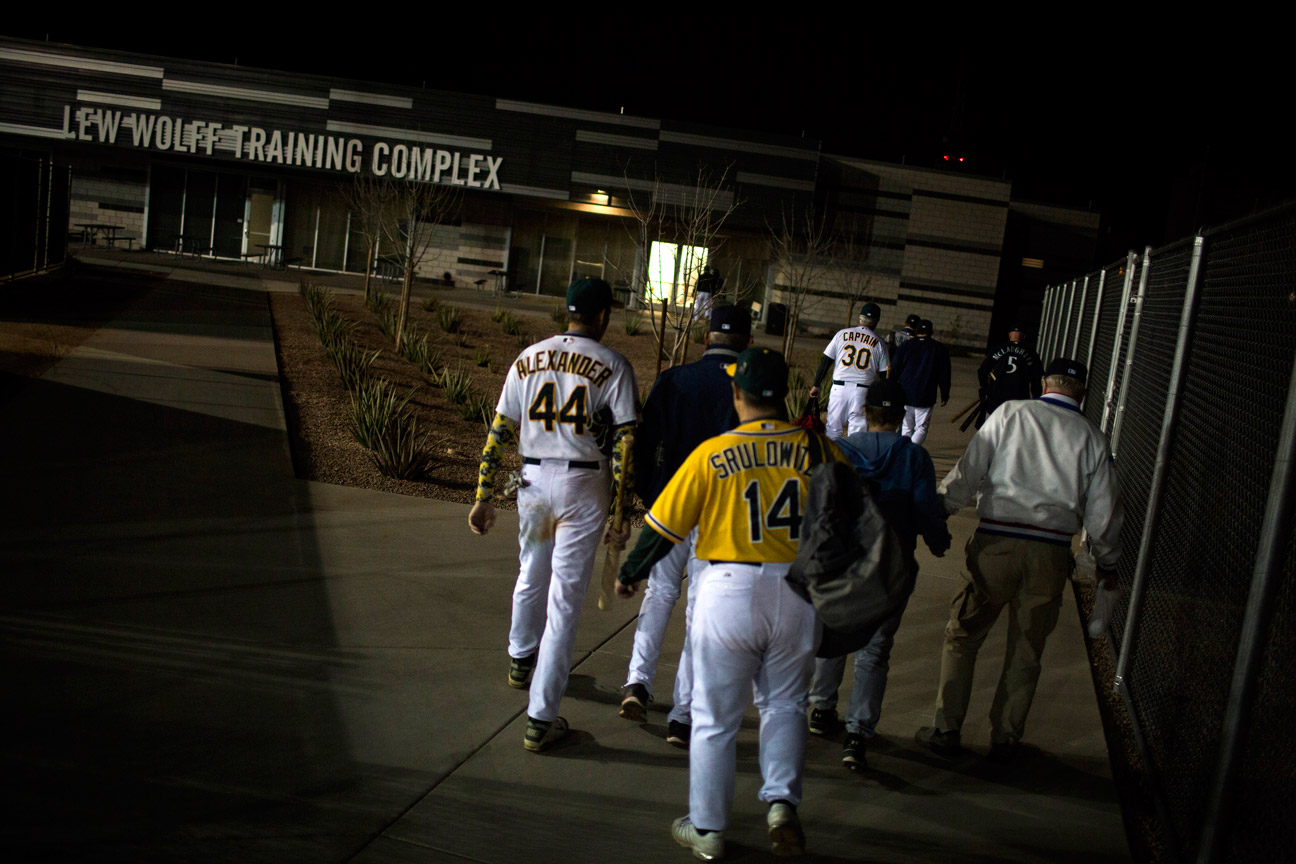 Players make their way to the locker rooms after the championship game. Because the game was played at night, some campers, who had arrived as early as 6:45 a.m., didn't leave the complex until nearly 9:30 p.m.