ameras have closely followed Kobe Bryant for more than half his life. That's how it goes when you enter the Hollywood scene at age 17, as the first guard to leap from preps to pros, billed as the next in a long line of Lakers greats.

Those cameras were clicking on and off the court throughout Kobe's Lakers-record 1,345 games played. And they will be there in force Wednesday night at Staples Center to document the end of a drama-filled career that helped bring five more banners to the Lakers and saw Kobe score more points than anyone in NBA history except Kareem Abdul-Jabbar and Karl Malone.

The photographers who captured many of Kobe's classic moments -- sitting exhausted with Shaquille O'Neal after their first title, taking impossible shots in crowds of defenders, screaming with Lakers fans amid confetti after his final championship -- describe how they got the shots and what made them resonate.

This is Kobe's 20-year NBA story told through the eyes and voices of 12 talented photojournalists who were an intimate part of the journey. 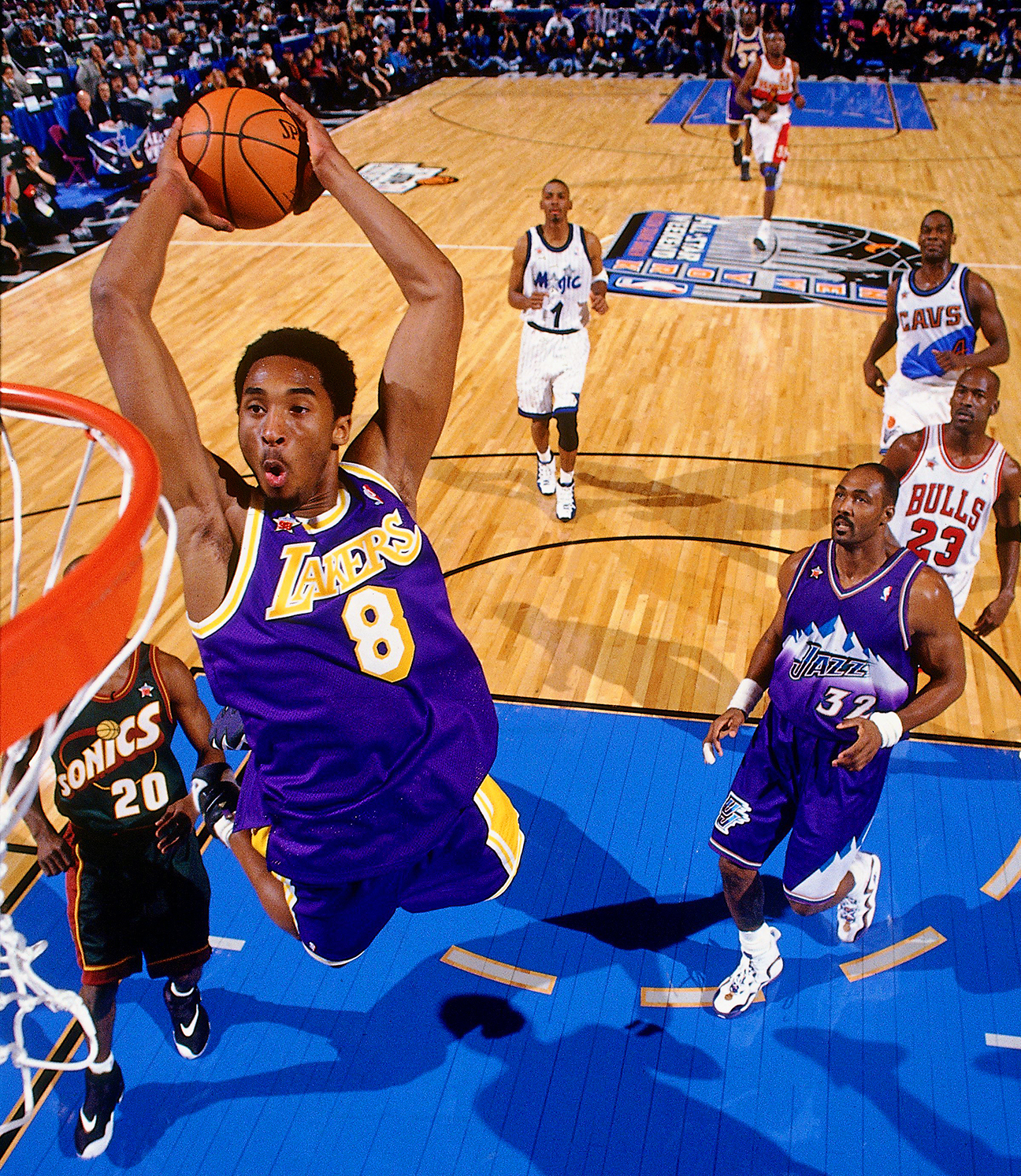 Andrew Bernstein, Los Angeles Lakers: "Kobe stole the show at the 1998 NBA All-Star Weekend in New York. It was the beginning of many stellar performances over the years at Madison Square Garden. There are at least four Hall of Fame players in this photo, and Kobe is rising above them all." 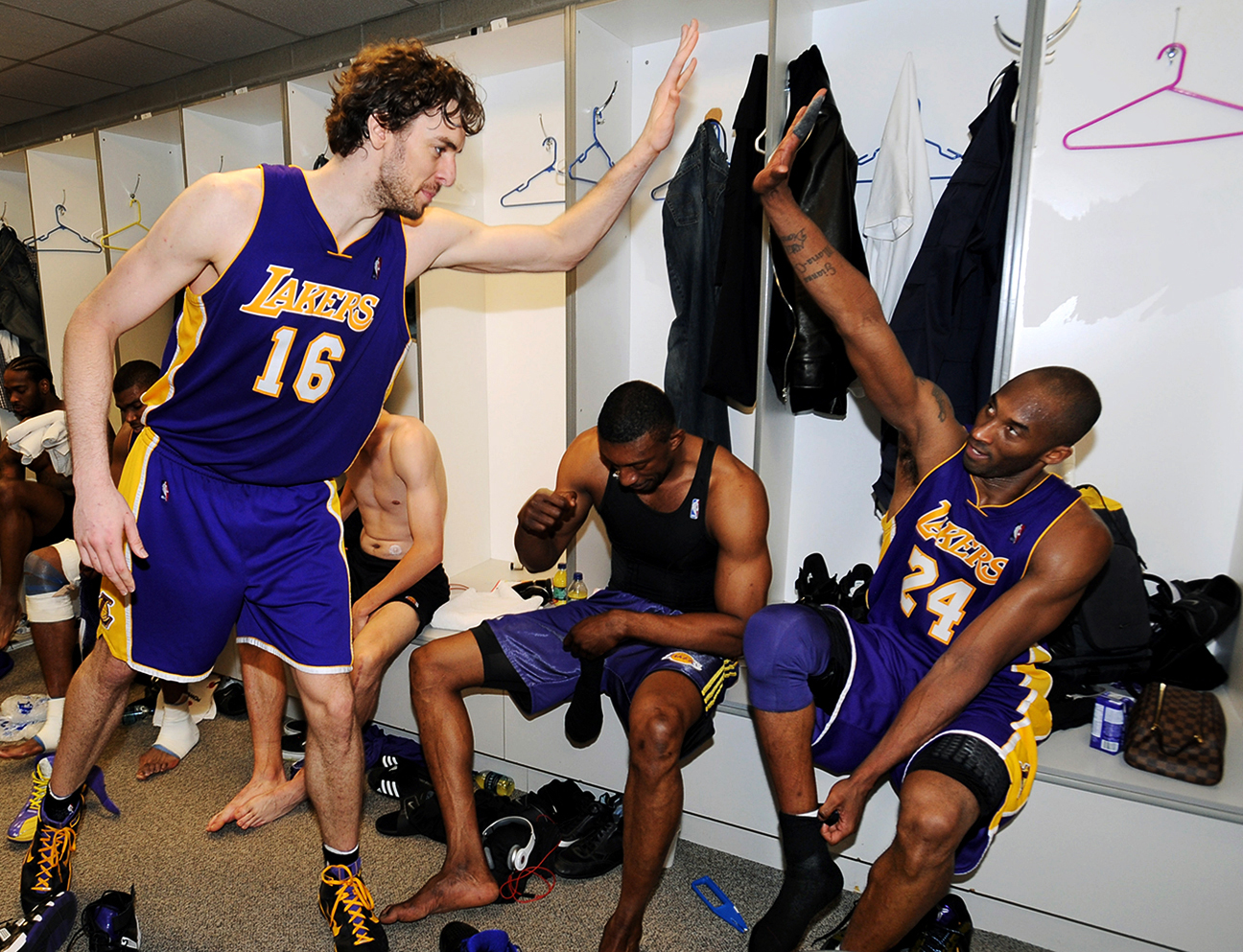 Andrew Bernstein, Los Angeles Lakers: "I shot this photo after the Lakers defeated the Utah Jazz in Game 4 of the 2010 Western Conference semifinals, completing a sweep of the Jazz on their way to Kobe's fifth championship. Usually the media needs to wait some time after the team enters the locker room following a game. But because it was a closeout game, as NBA and Lakers' team photographer, I was allowed to go in with the team right from the court. Pau had a huge game -- 33 points and 14 rebounds -- and Kobe added 32 points. This moment was important to capture, and I positioned myself in the right place to get it." 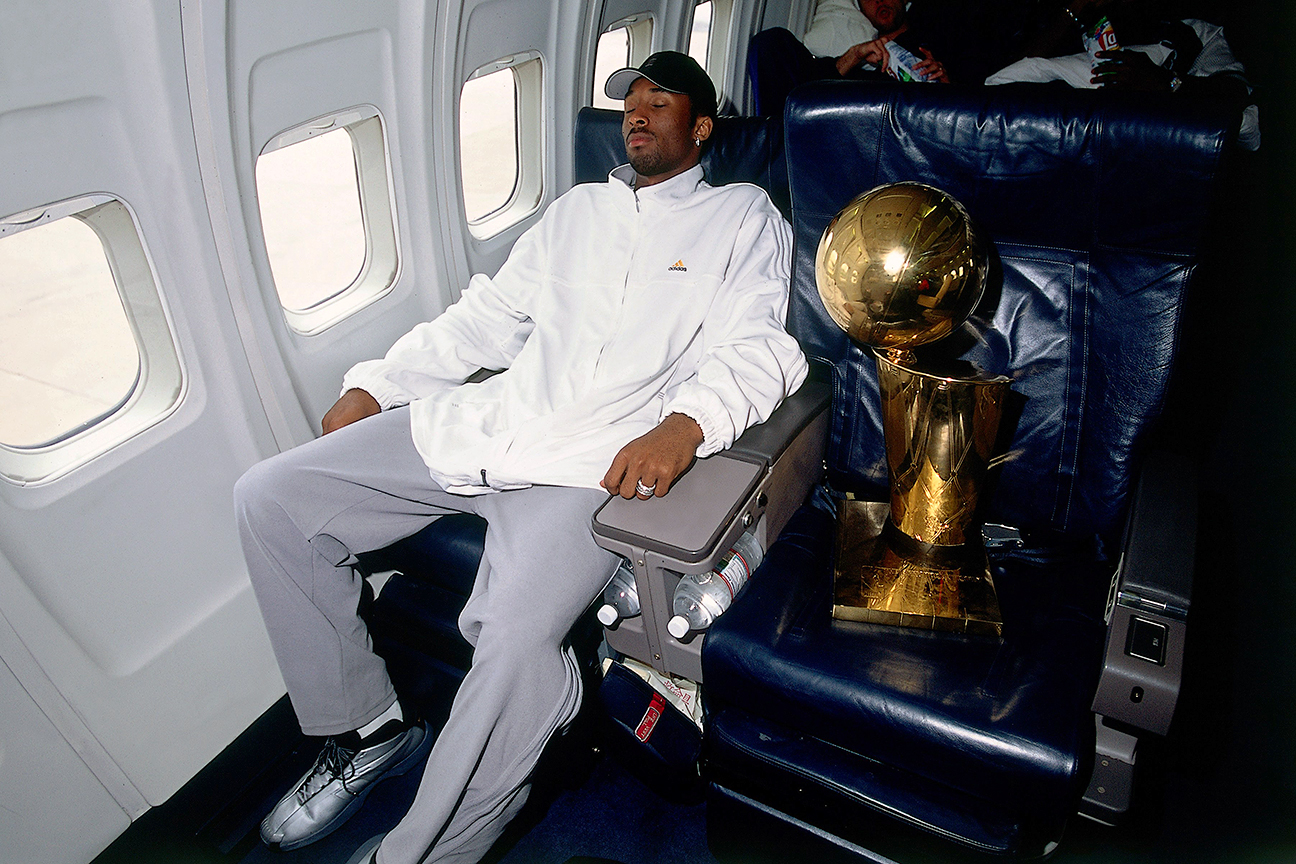 Andrew Bernstein, Los Angeles Lakers: "On the flight back from Philadelphia after the Lakers defeated the 76ers in the 2001 NBA Finals, Kobe gets some much-needed rest with his seatmate Larry (aka the O'Brien Trophy). It's always fun traveling with the winning team after a championship. There's lots of relief and joy and everyone can finally exhale after the marathon NBA season." 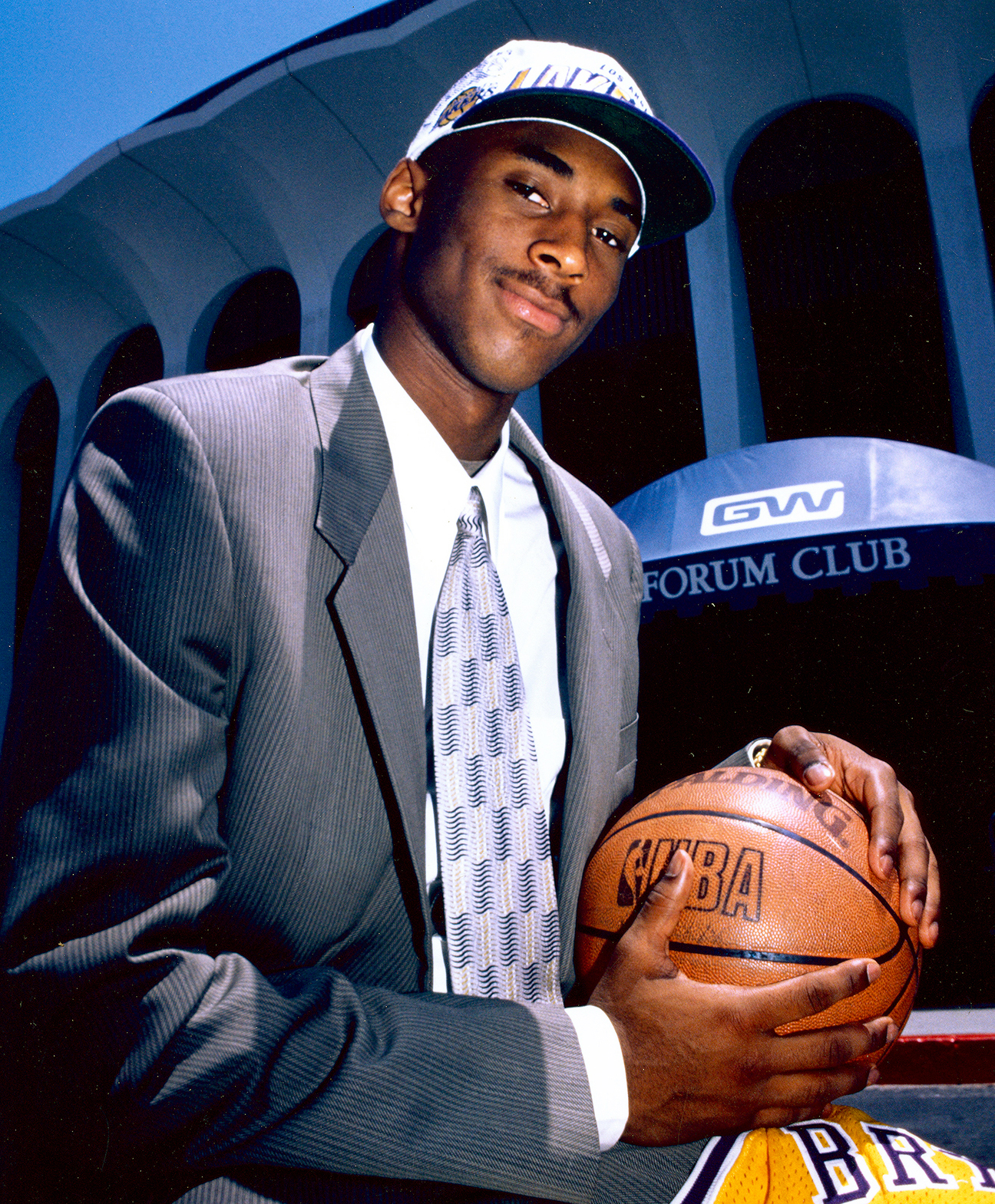 Jon SooHoo, NBA: "Kobe Bryant is introduced to Los Angeles during his first news conference as a Laker. After the news conference, I had the opportunity to shoot this portrait of Kobe in front of the Lakers' home arena at the time, the Great Western Forum. Action shots are always invaluable, but the opportunity to shoot his first appearance in L.A. makes this one of my favorite images." 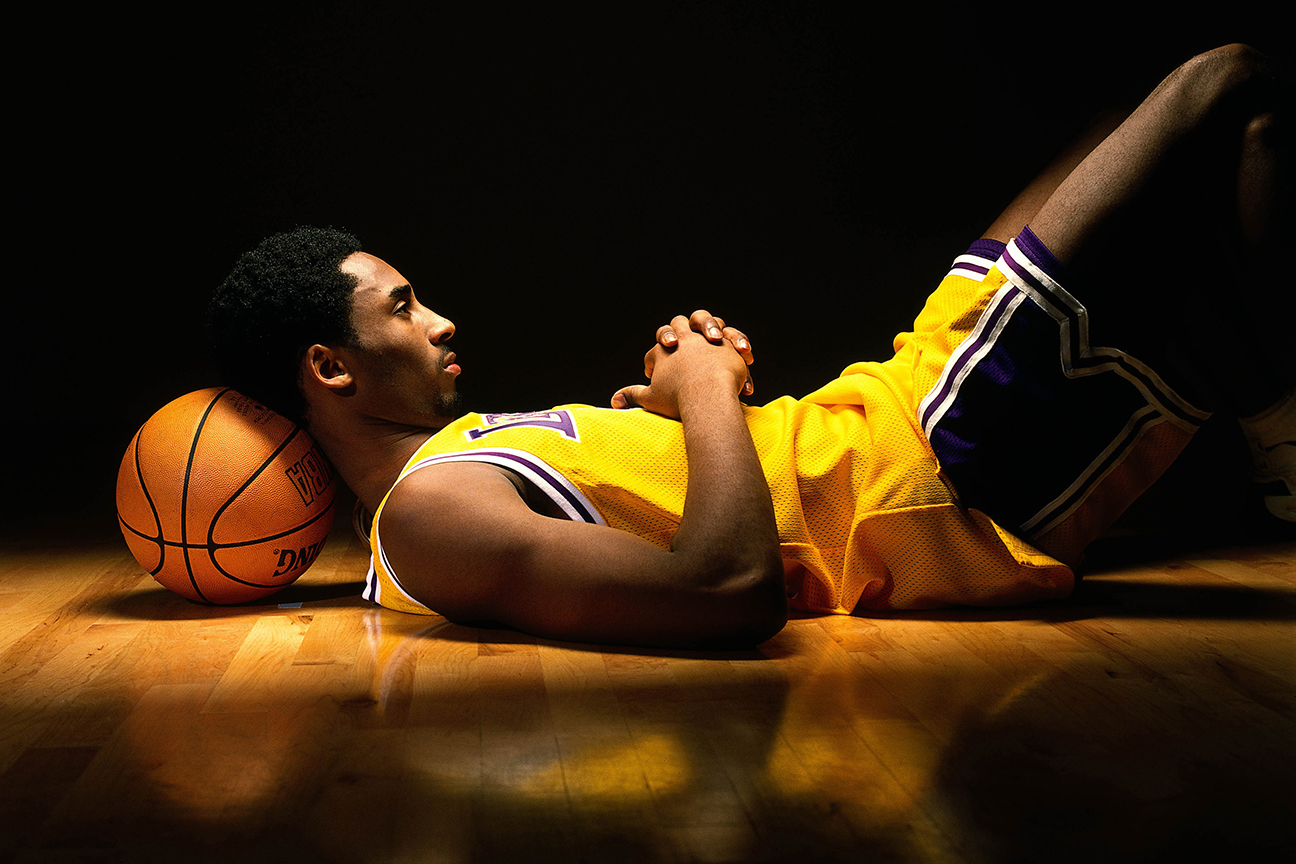 Jon SooHoo, NBA: "On assignment for the late 'Inside Sport Magazine,' photo editor Dave Durochik assigned me to do something different and gave me the inspiration to try this. During training camp ahead of Kobe's second season, Lakers PR man John Black let me set up at a racquetball court next to the gym, and I set my strip softbox (light) just above where I wanted Kobe to be and with another small softbox (light) to the left to fill or brighten the ball (an Andy Bernstein inspiration).

"The best part about this shoot was that my assistant for the day was my nephew, Andrew Bryant, who, with the shared last name, introduced himself to Kobe with that fact, and Kobe sat and chatted with him while I finished setting up. Kobe was awesome for this brief shoot while my nephew oozed with love and awe of Kobe." 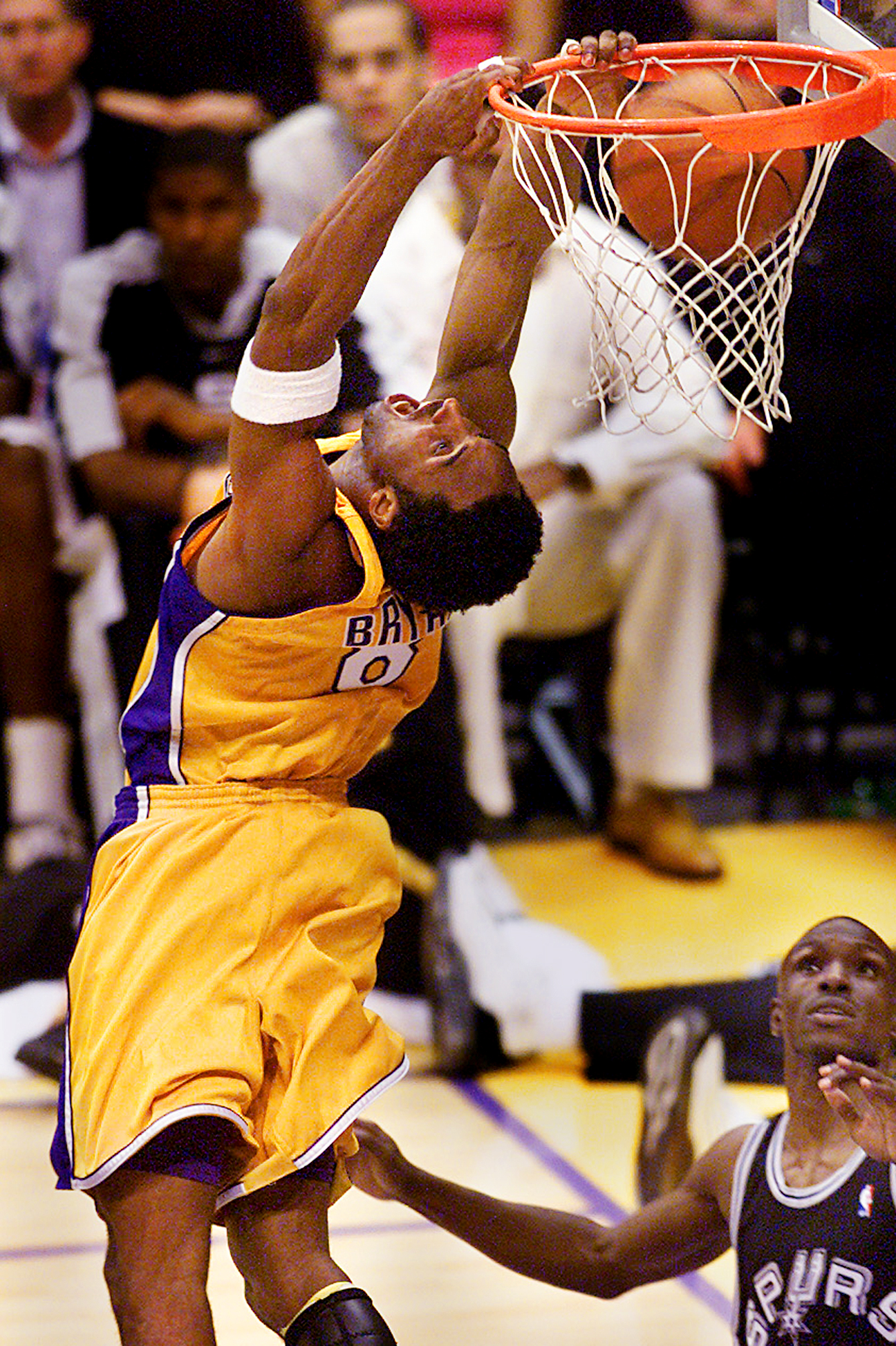 Lori Shepler, Los Angeles Times: "Thanks for all the amazing memories and moments we shared together. I will always remember and be honored for being able to capture many of your legendary moments during your breathtaking career as an NBA player." 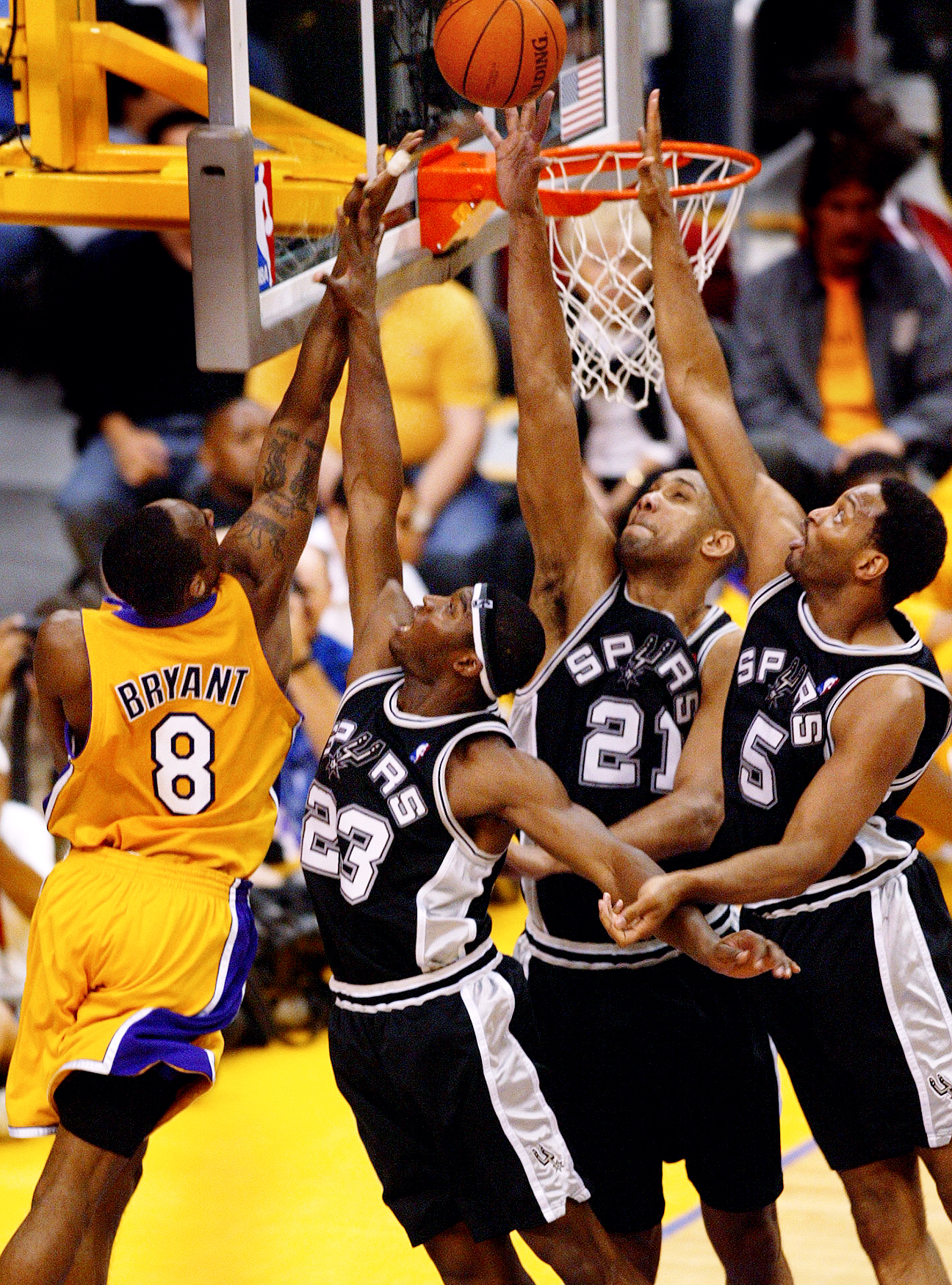 Lori Shepler, Los Angeles Times: "I was there to capture your first game and hopefully will be there for your last." 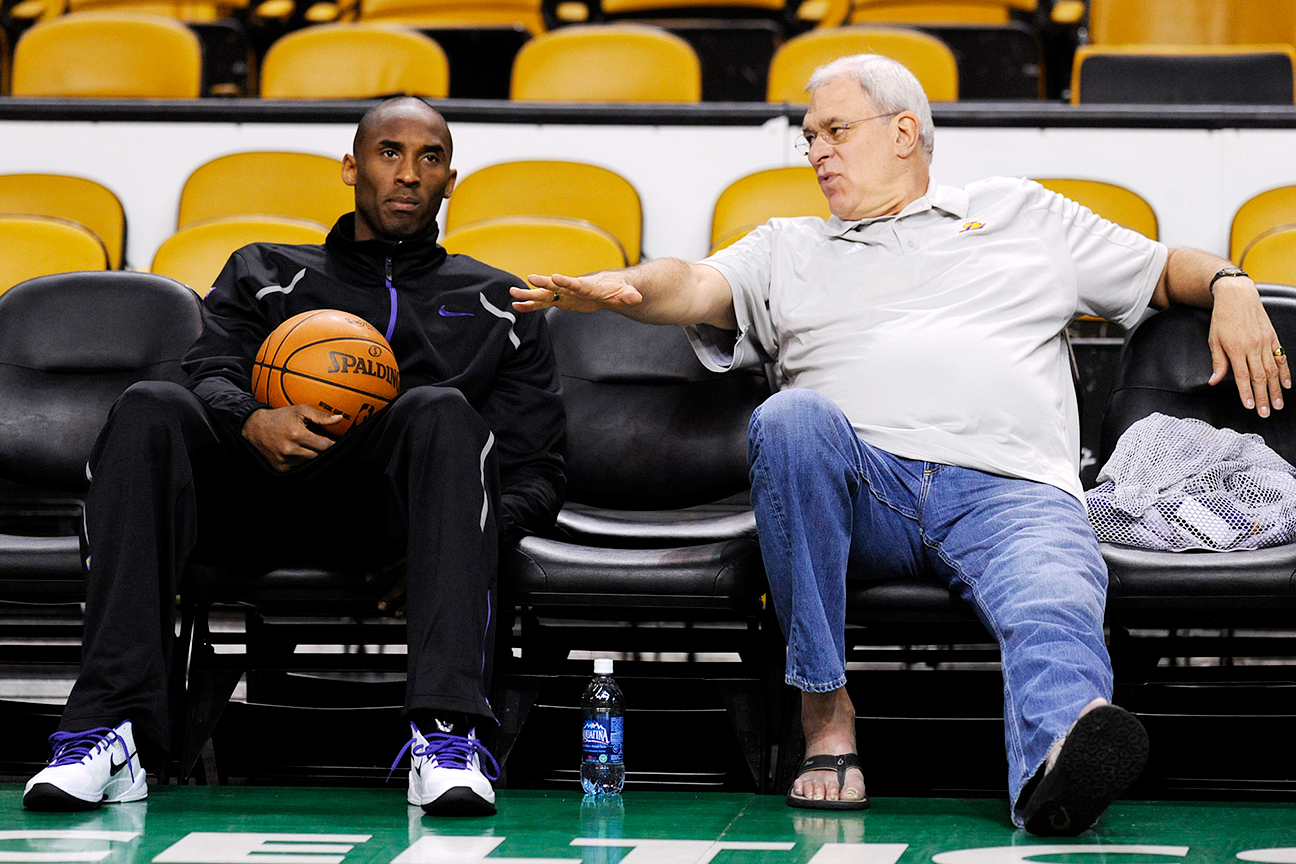 Michael Goulding, Orange County Register: "I have photographed Lakers from Magic Johnson to Jordan Clarkson, but Kobe Bryant is the one Laker during that time who I always expected to deliver something spectacular every game." 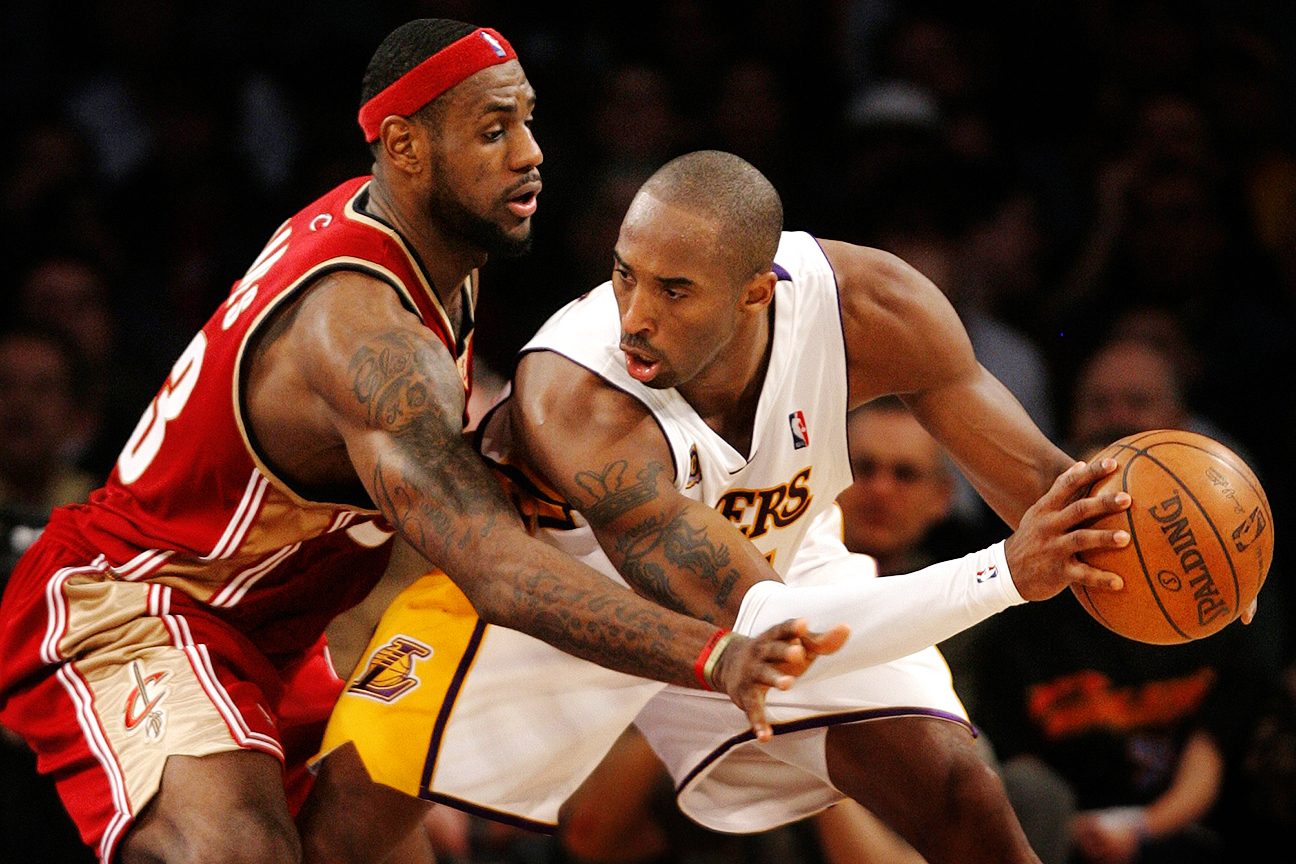 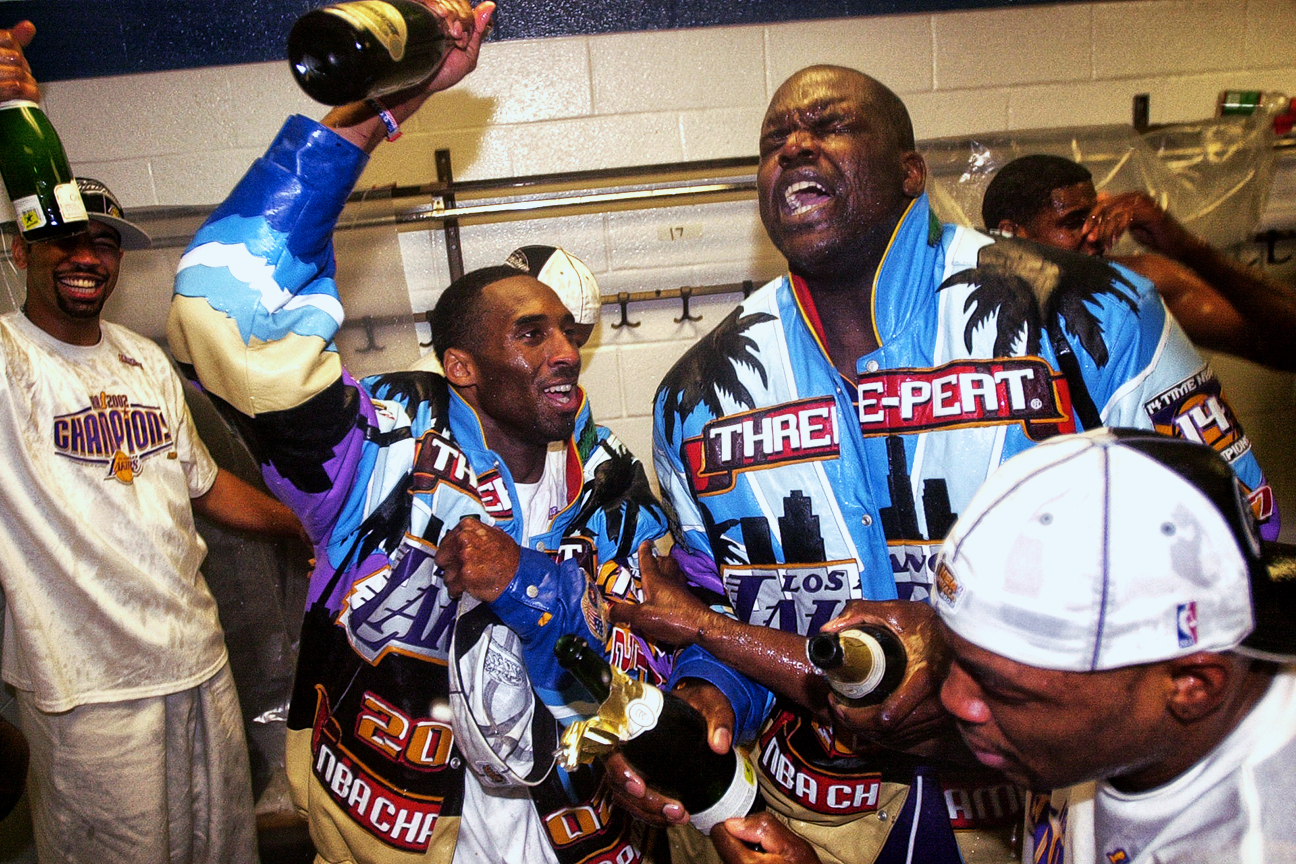 Hans Gutknecht, Los Angeles Daily News: "Kobe Bryant and Shaquille O'Neal celebrate winning their third consecutive NBA championship after sweeping the New Jersey Nets in 2002. This was such a great moment to capture. It was well-known that Kobe and Shaq were feuding and had their differences over the years. They had to put those feelings aside and come together to lead the Lakers to another championship. This was the final ring they won together as Lakers." 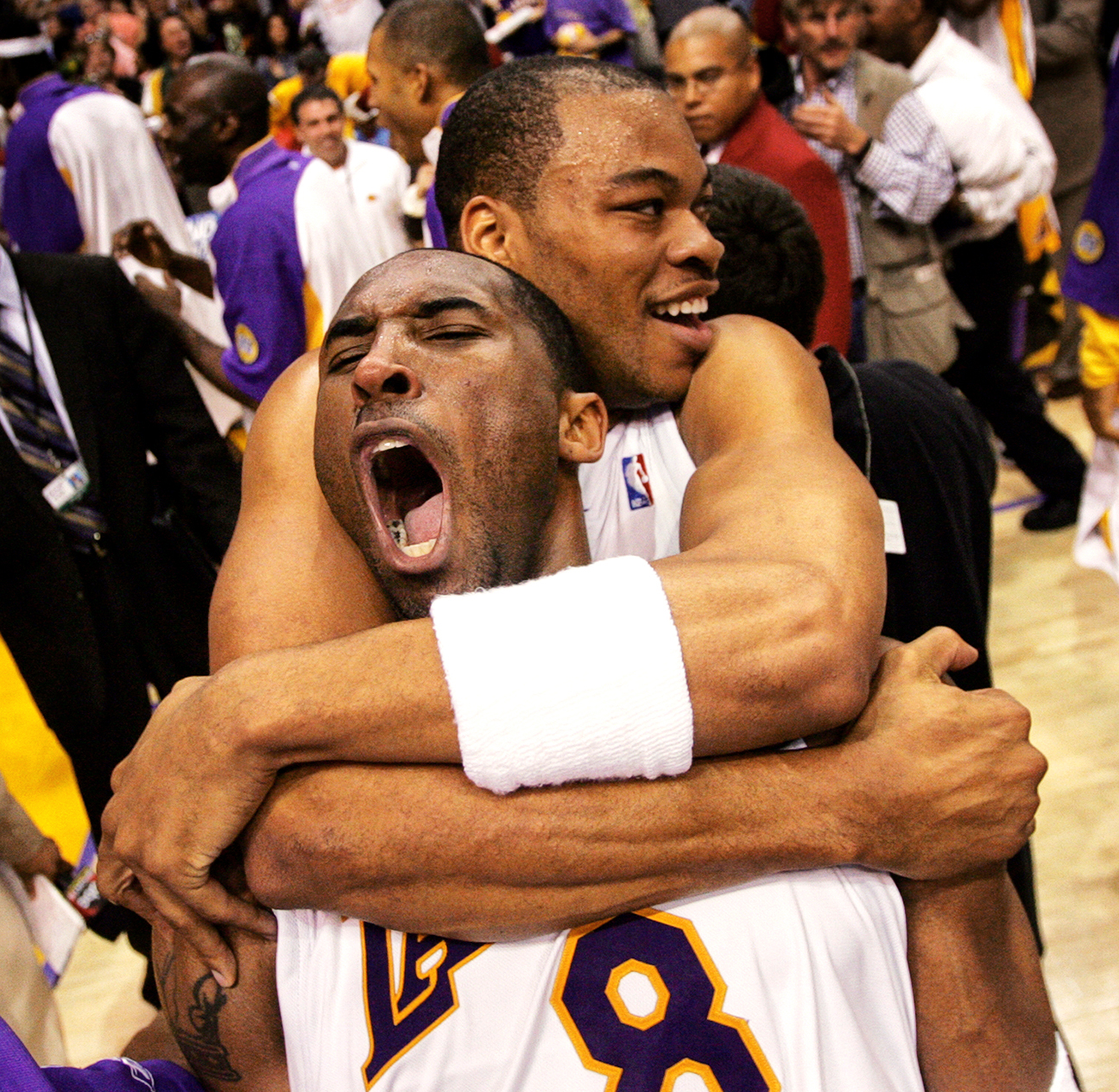 Hans Gutknecht, Los Angeles Daily News: "Kobe celebrates after sinking a 17-footer as time expired to beat the Suns 99-98 and take a 3-1 lead in the first round of the 2006 Western Conference playoffs in 2006."

"I can remember Staples Center exploding with cheers as Kobe was mobbed by his teammates. I made a beeline for Kobe as I rushed onto the court. I put my camera over my head as far as I could and began shooting photos of the jubilation. Just as I started shooting, he leaned his head back, looked skyward and let out a loud celebratory yell. It was such a great moment for Kobe, after he averaged 35 points per game in 2006 and led the Lakers back to the playoffs after missing them the previous year." 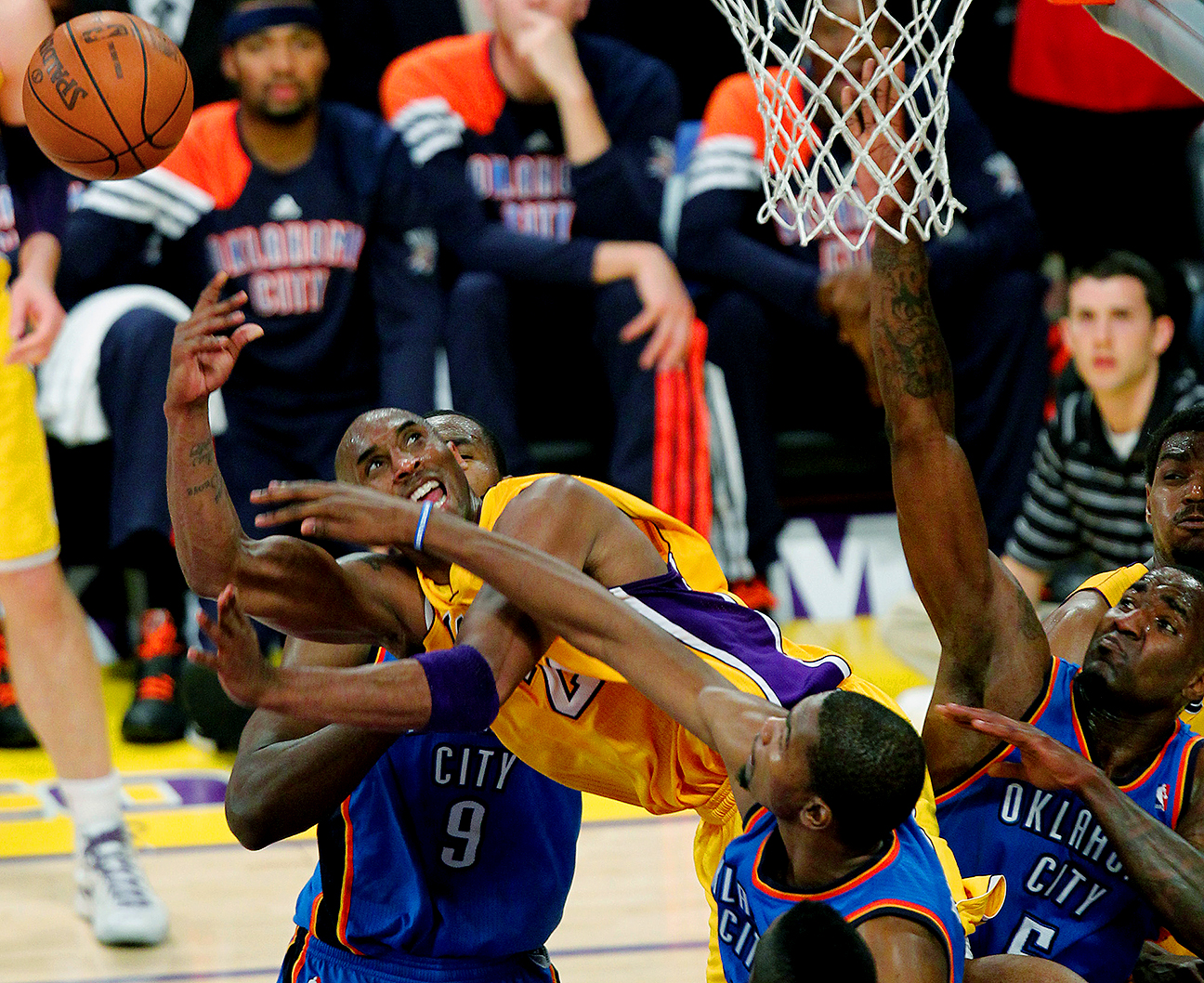 Robert Gauthier, Los Angeles Times: "This shot sums up Kobe's career in one image. No matter the odds, he always believed he could succeed. The Lakers lost this 2012 Western Conference semifinal series to the Thunder in five games, and the franchise continued its recent descent." 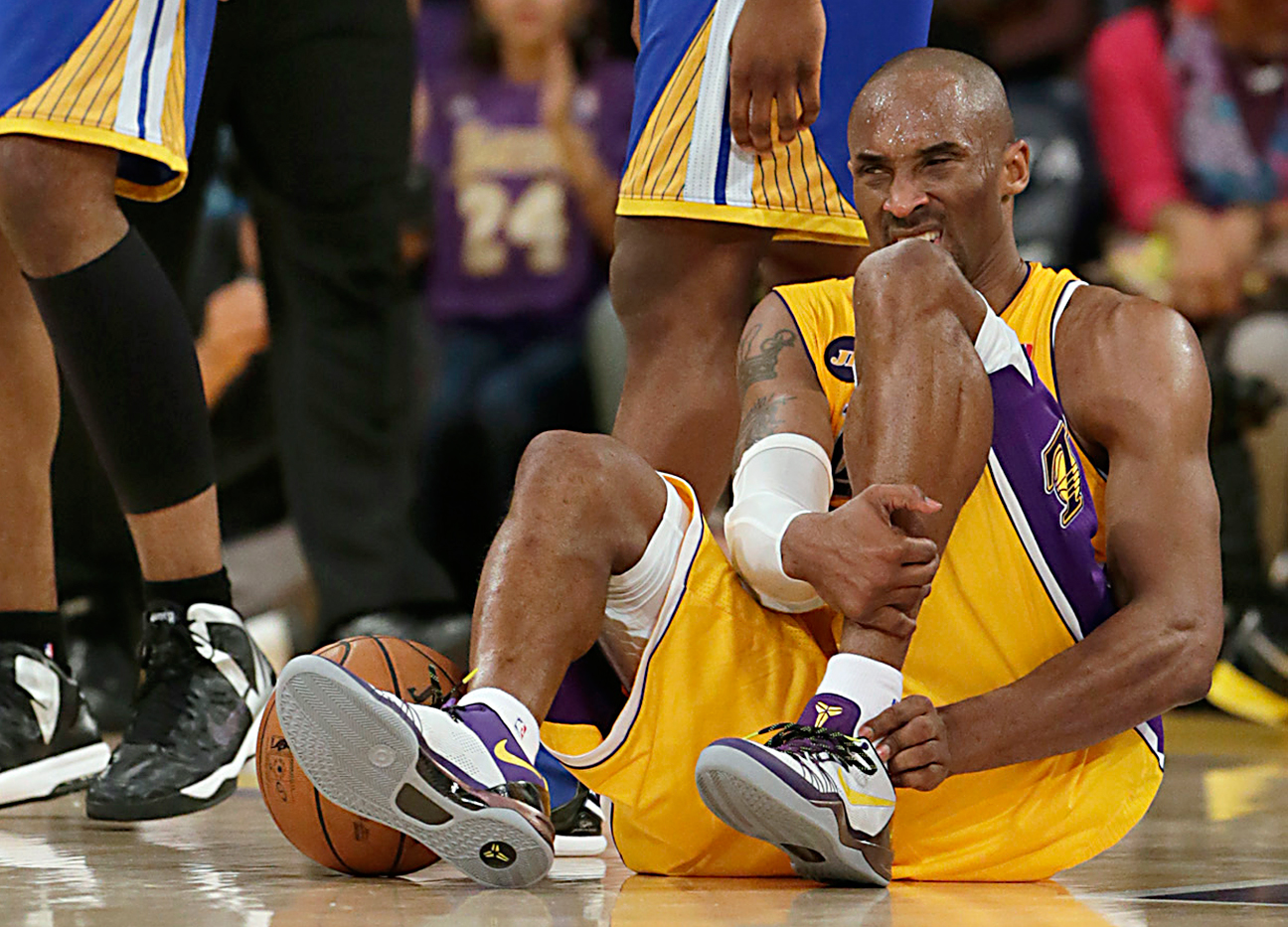 Robert Gauthier, Los Angeles Times: "Kobe tore his Achilles tendon during a game against the Golden State Warriors near the end of the 2013 season. After writhing in pain on the court, he picked himself up, shot two free throws and hobbled to the bench. As trainer Gary Vitti attended to him, it crossed my mind that this might be Kobe's last game. In true Kobe fashion, though, he proved me wrong and cobbled together three more seasons after the injury." 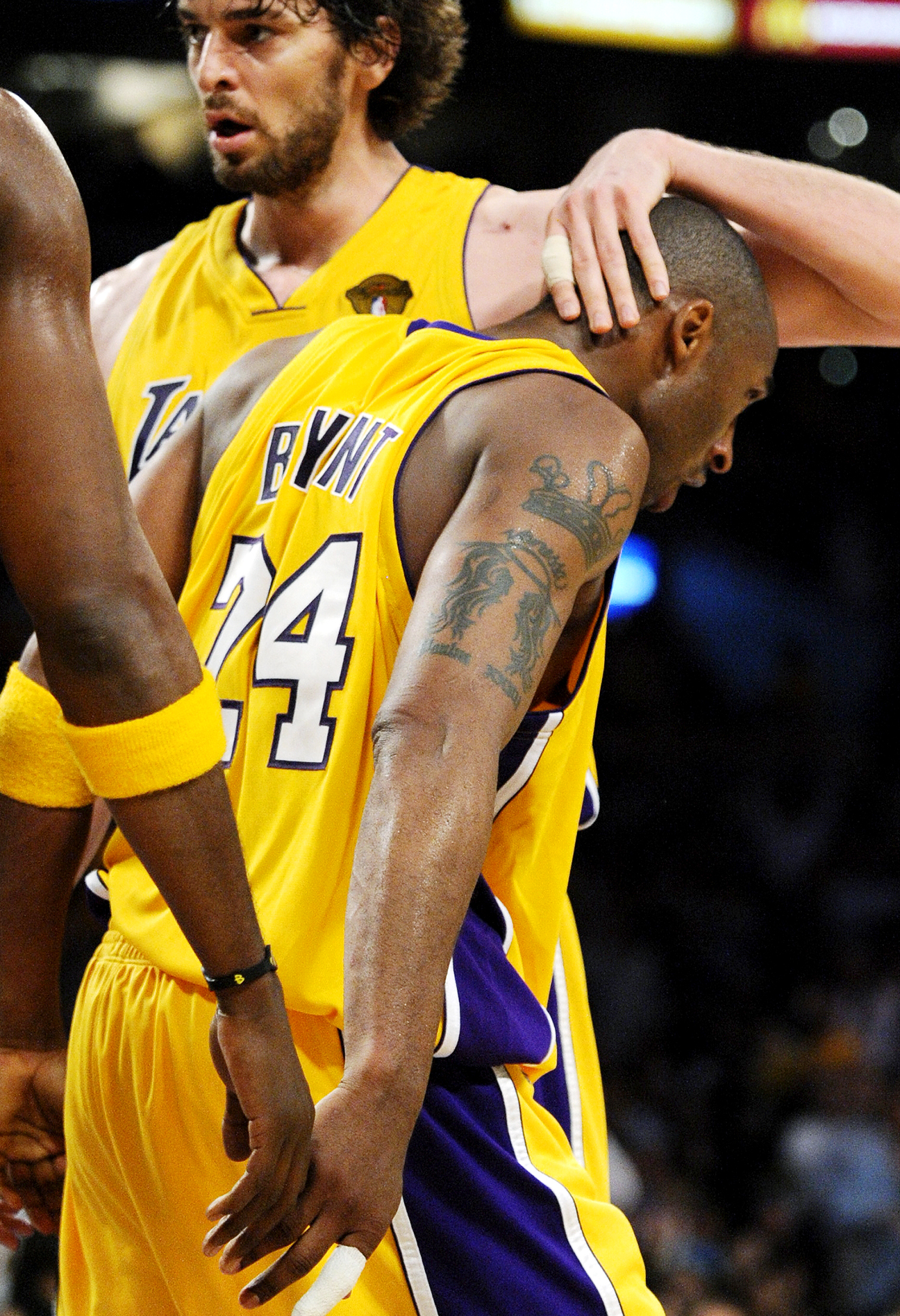 John McCoy, Los Angeles Daily News: "Watching Pau Gasol and Kobe play against the Celtics in Game 6 of the 2010 NBA Finals was an interesting experience. The two seemed like they had reached a level of trust that Kobe had with very few other players. During a very physical series against Boston, they seemed to have a chemistry and level of trust that I had never seen during the Shaq and Kobe days. They communicated on a different level. It was like they were brothers." 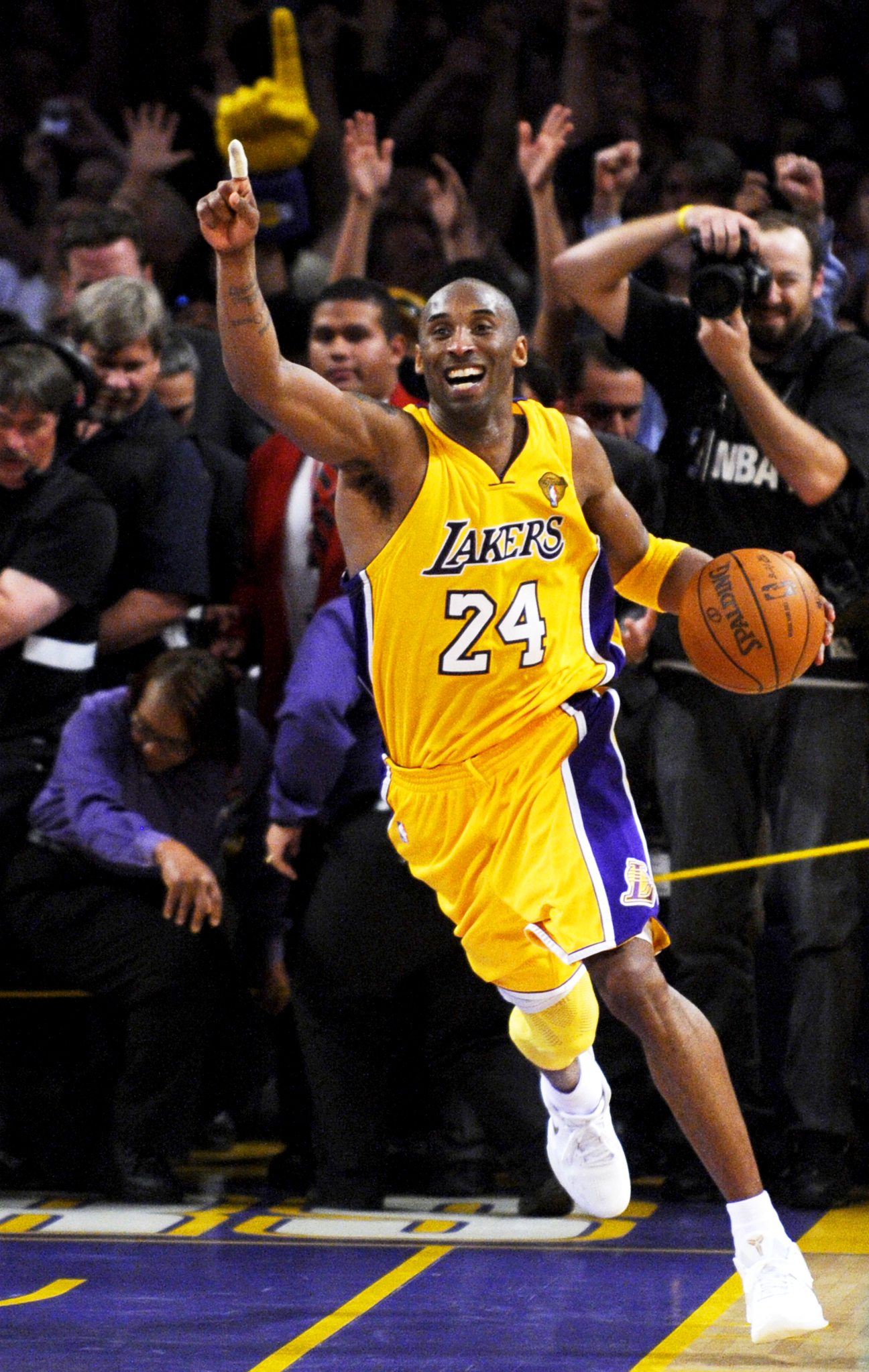 John McCoy, Los Angeles Daily News: "This is a celebratory moment during the final moments of Game 7 of the 2010 NBA Finals Lakers victory over the Celtics. The Celtics' (Rajon) Rondo threw up a last-second prayer that was rebounded by Pau Gasol. Pau passed the ball to Lamar Odom who then heaved it to Kobe who was streaking down to the other side of the court. Kobe looked like the weight of the world had been lifted from his shoulders." 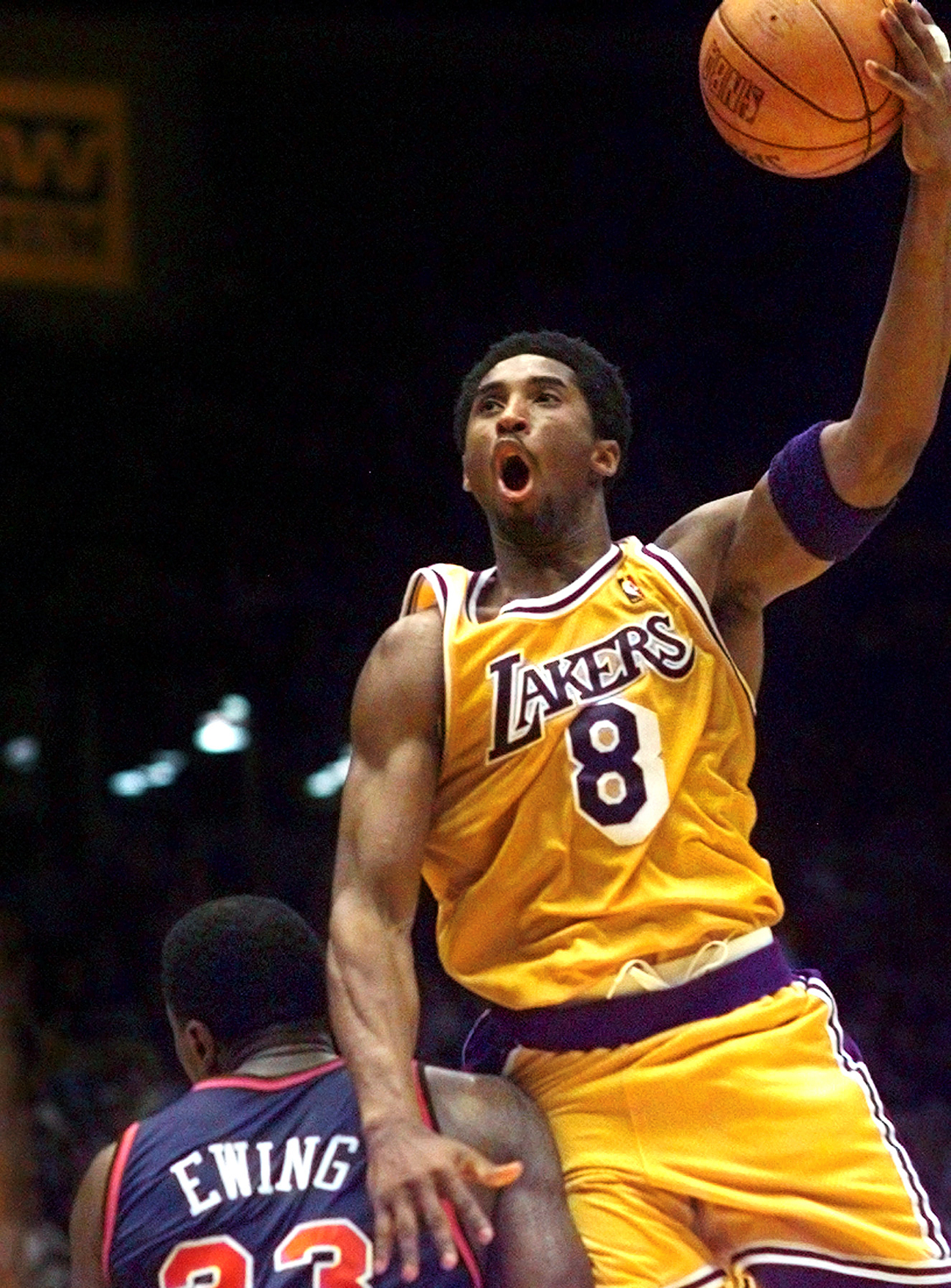 Mark J. Terrill, Associated Press: "This is one of the earliest images that I have of Kobe, and it shows him going up against the New York Knicks' Patrick Ewing. It was taken with one of the first professional digital cameras that at the time cost about $18,000 and was 2 megapixels. Digital photography literally evolved along with Kobe's career." 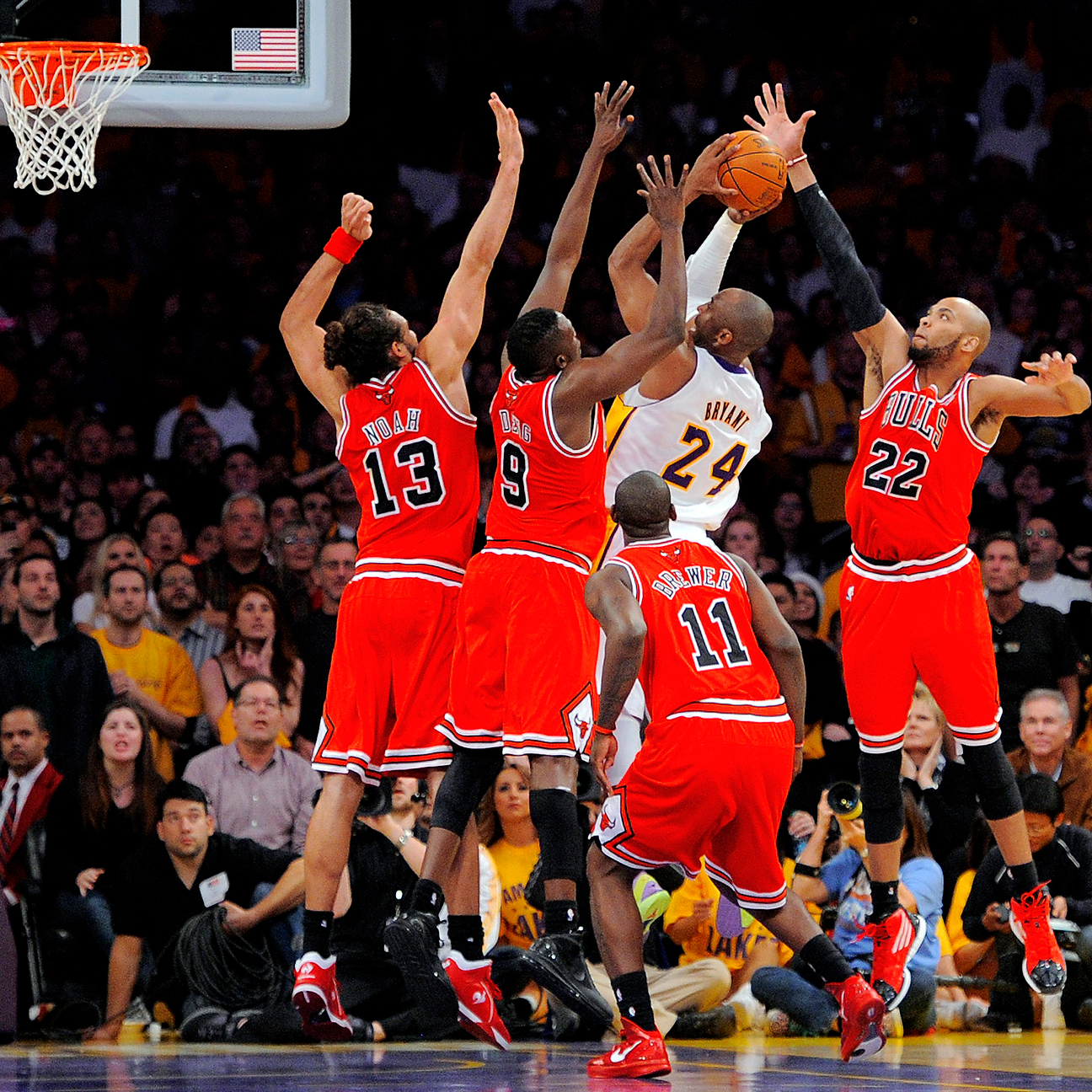 Mark J. Terrill, Associated Press: "This is one of my favorites because it shows what it took to guard Kobe -- nearly all of the Bulls. Photographers typically shoot much tighter when looking to the other end of the court, but standard practice is to shoot last-second shots such as this one a little looser for atmosphere and to possibly show the shot clock." 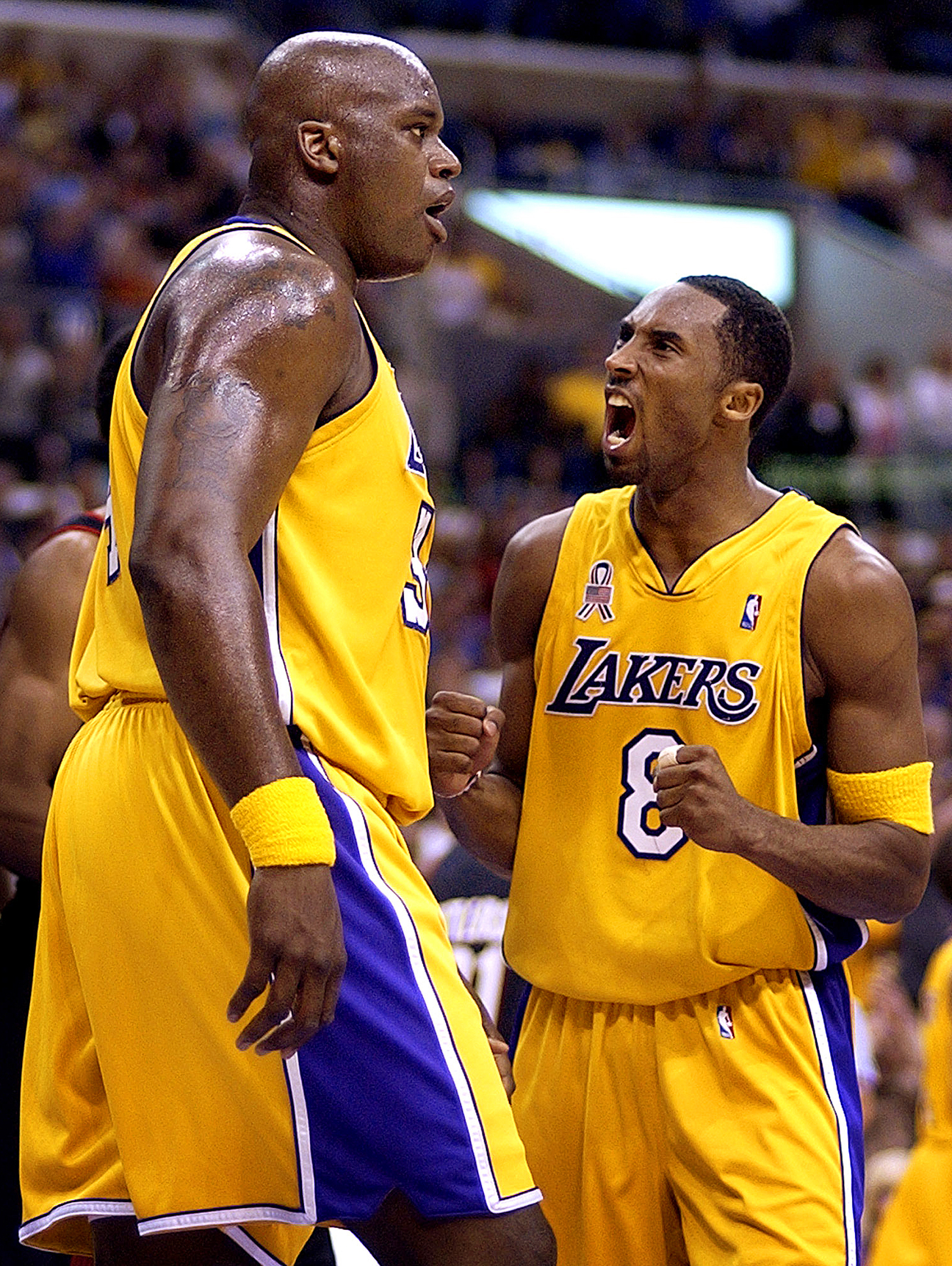 Mark J. Terrill, Associated Press: "It was always great to see interaction such as this between Shaq and Kobe. Although they had their differences off the court, they were all business on it, and the playoffs seemed to bring out the best in them. I didn't really appreciate how lucky I was to have photographed so many of their games until now. I can only imagine what might have been if Shaq had stayed with the Lakers." 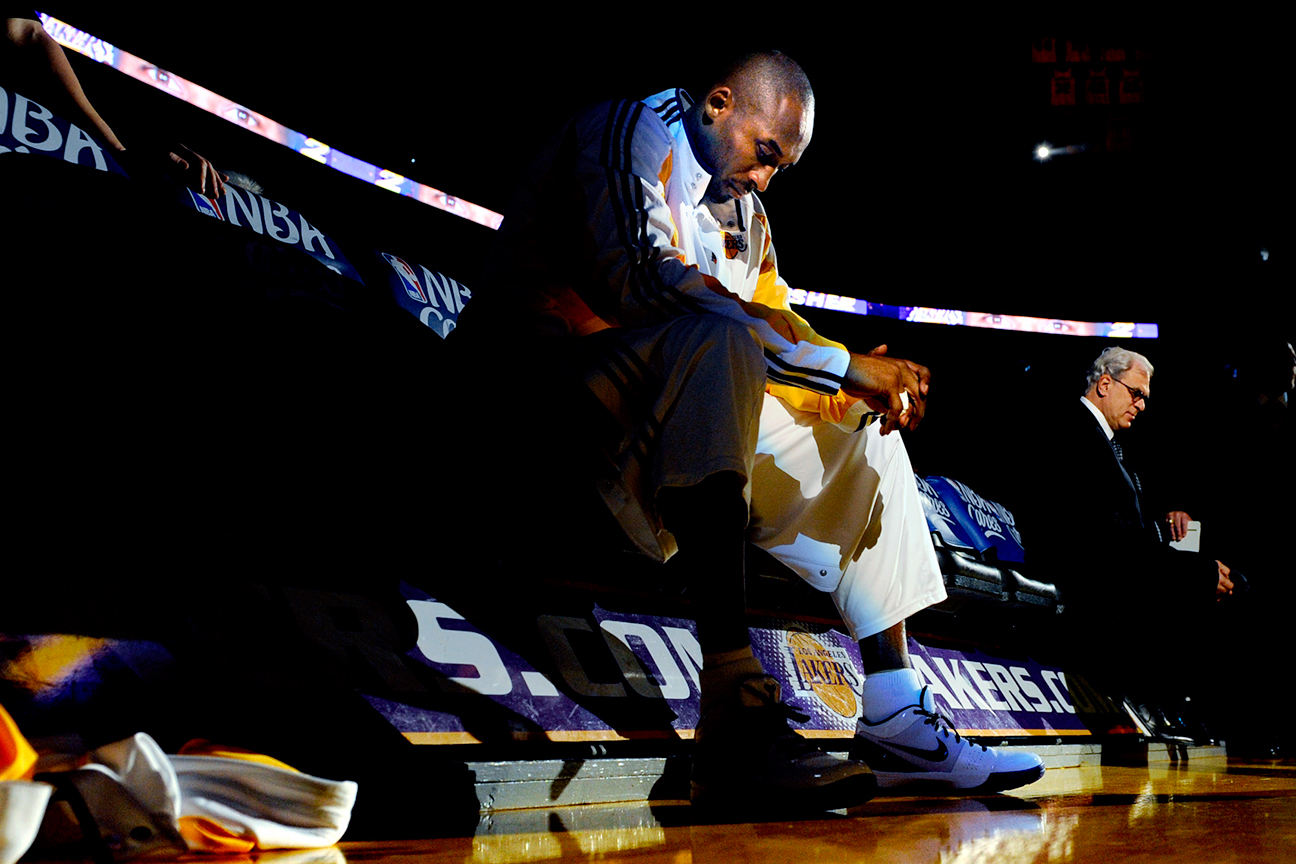 Wally Skalij, Los Angeles Times: "I picked these two photos because they illustrate a range of emotions. The one thing I will never forget is Kobe's intensity, seen in the photo here with head coach Phil Jackson. Never will I forget that face when he walks into the arena and out onto the court. On the flip side, I will never forget the few times he would release, in one quick moment, all that is built up and the weight that it carries." 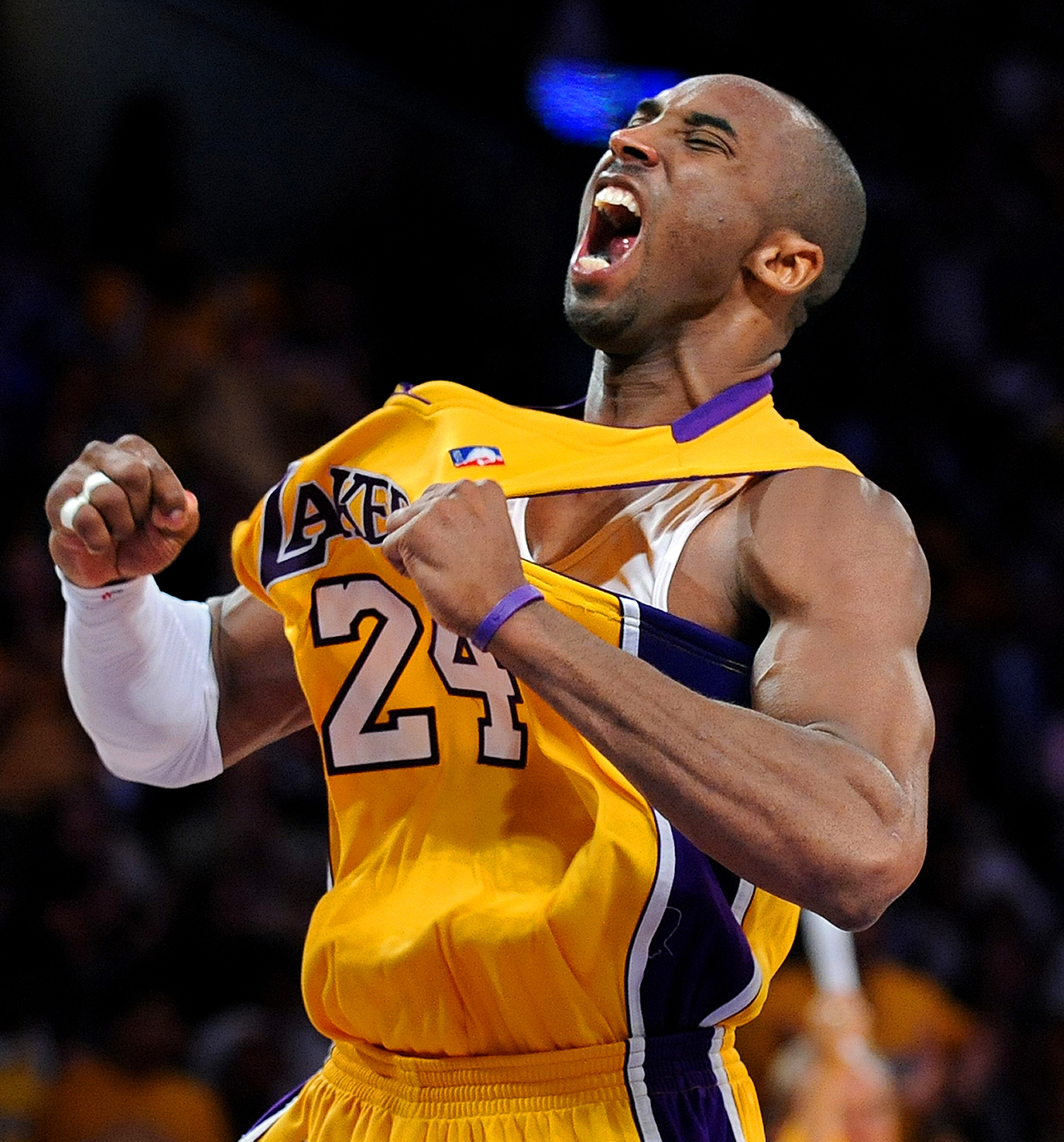 Wally Skalij, Los Angeles Times: "No doubt, there have been amazing action photos of Kobe making off-balance 3-pointers, dunking over 7-foot centers and playing with broken fingers and sprained ankles. But none of that can match his intensity." 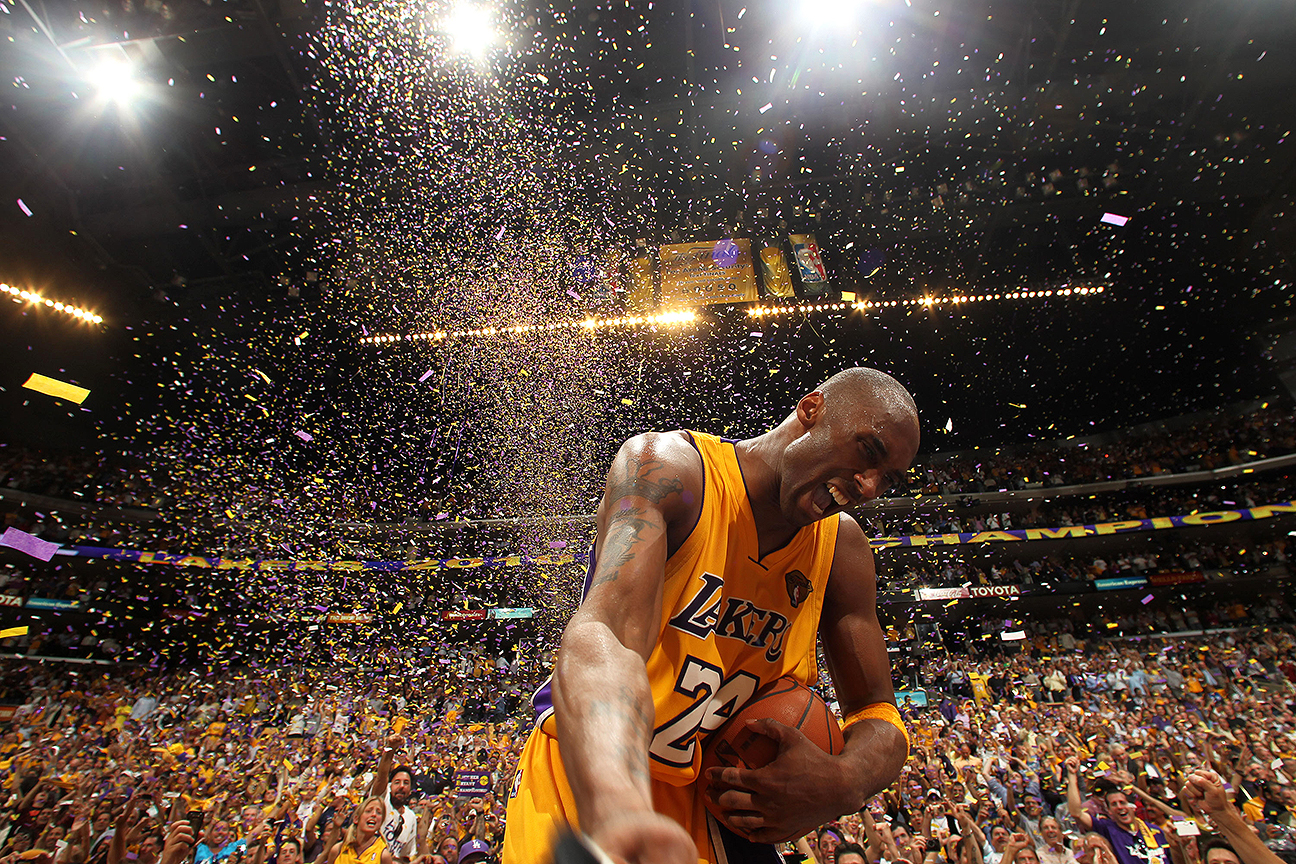 Nathaniel Butler, NBA: "In 2010, Kobe and the Lakers defeated the Boston Celtics in a classic Game 7 at Staples Center. This was Kobe's fifth NBA championship. This photo is one of my more memorable because you can feel the raw emotion with his scream and fist pump. In a spontaneous moment, he jumped up on the scorer's table to acknowledge the home crowd. For those of us fortunate to have been around him throughout the years, Kobe's competitiveness and will to win at all costs are legendary. This image embodies those traits." 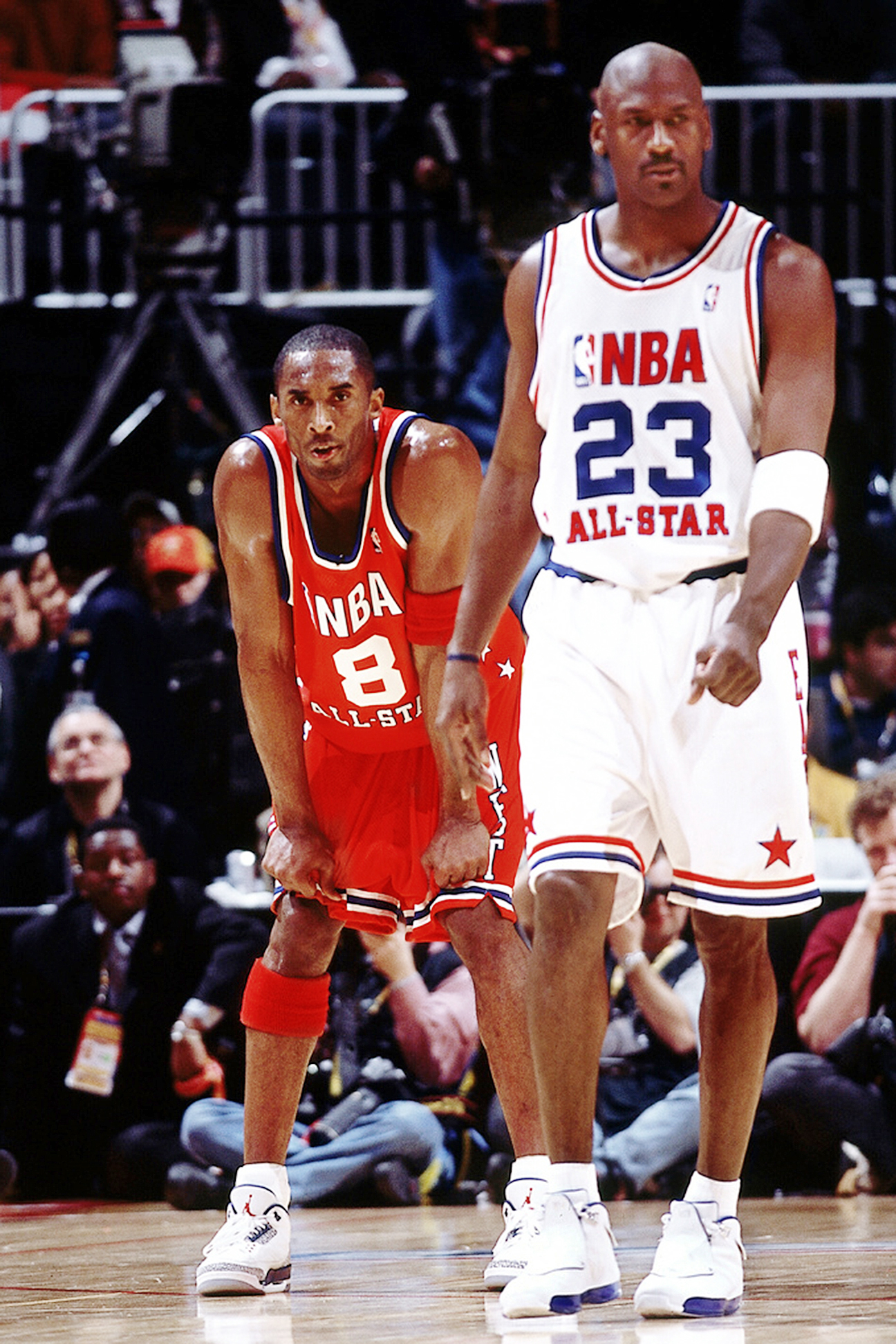 Nathaniel Butler, NBA: "At the 2003 NBA All-Star Game in Atlanta, Michael Jordan was making his last appearance in the event, and Kobe was primed to become the face of the NBA. He had modeled so much of his game after MJ's. This felt to me like a 'passing of the torch' moment." 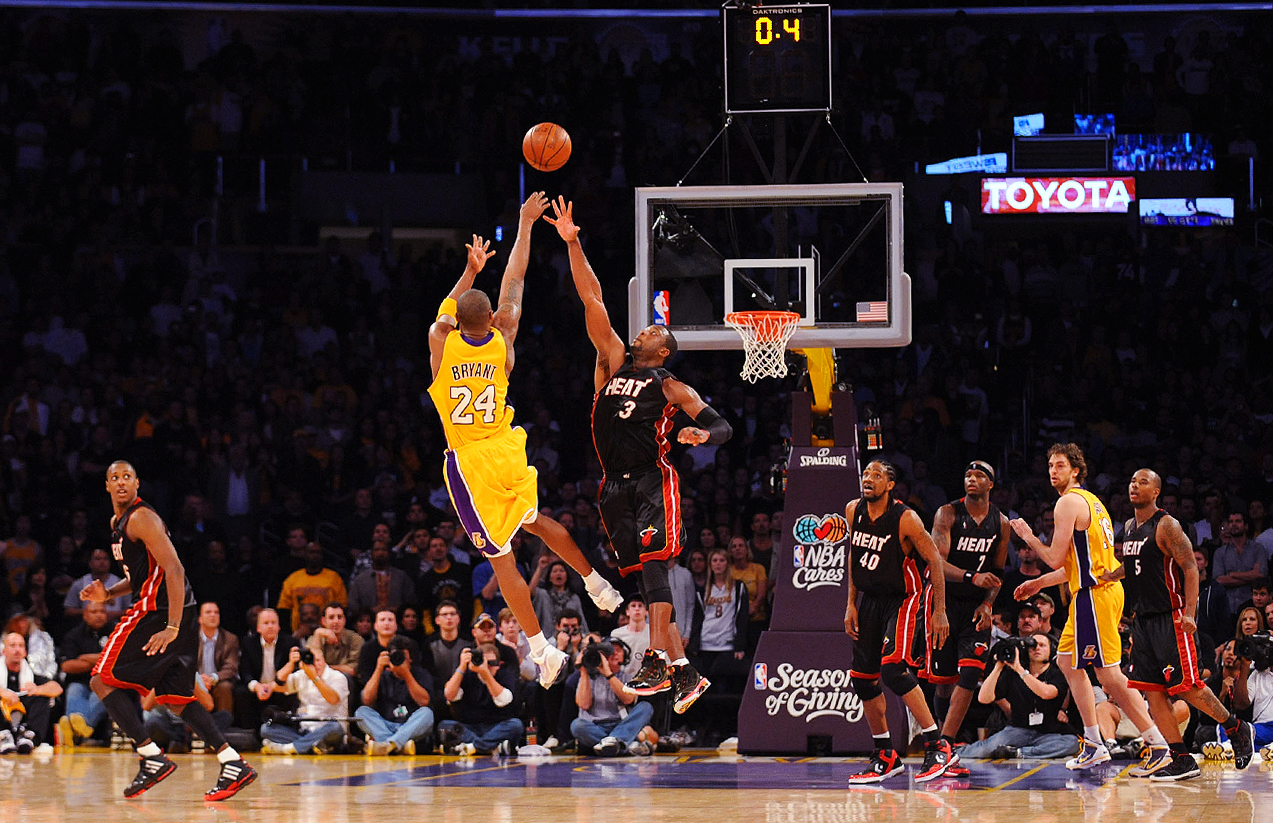 Noah Graham, NBA: "I always told Kobe he made my job easy. All I had to do was sit back and wait for him to do something amazing. And he never let me down. Whether it was hitting the game-winning shot, going for 81 points or getting to the hoop with some ridiculously acrobatic, controlled and calculated move, Kobe was the man." 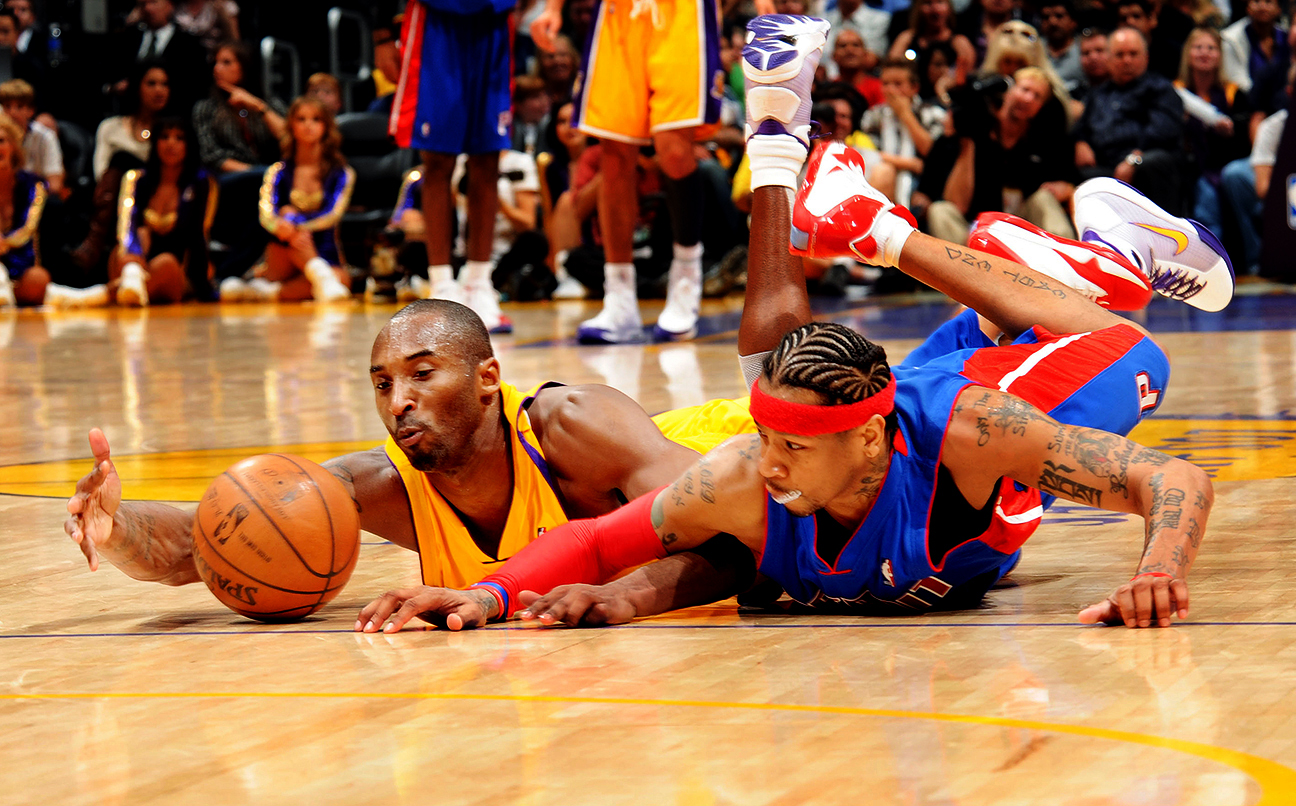 Noah Graham, NBA: "He made the best athletes in the world look unprepared night in and night out. And I was lucky enough to be there and watch it all go down. How do I put the greatness of Kobe Bryant into words? I can't, but I hope my pictures will help everyone remember." 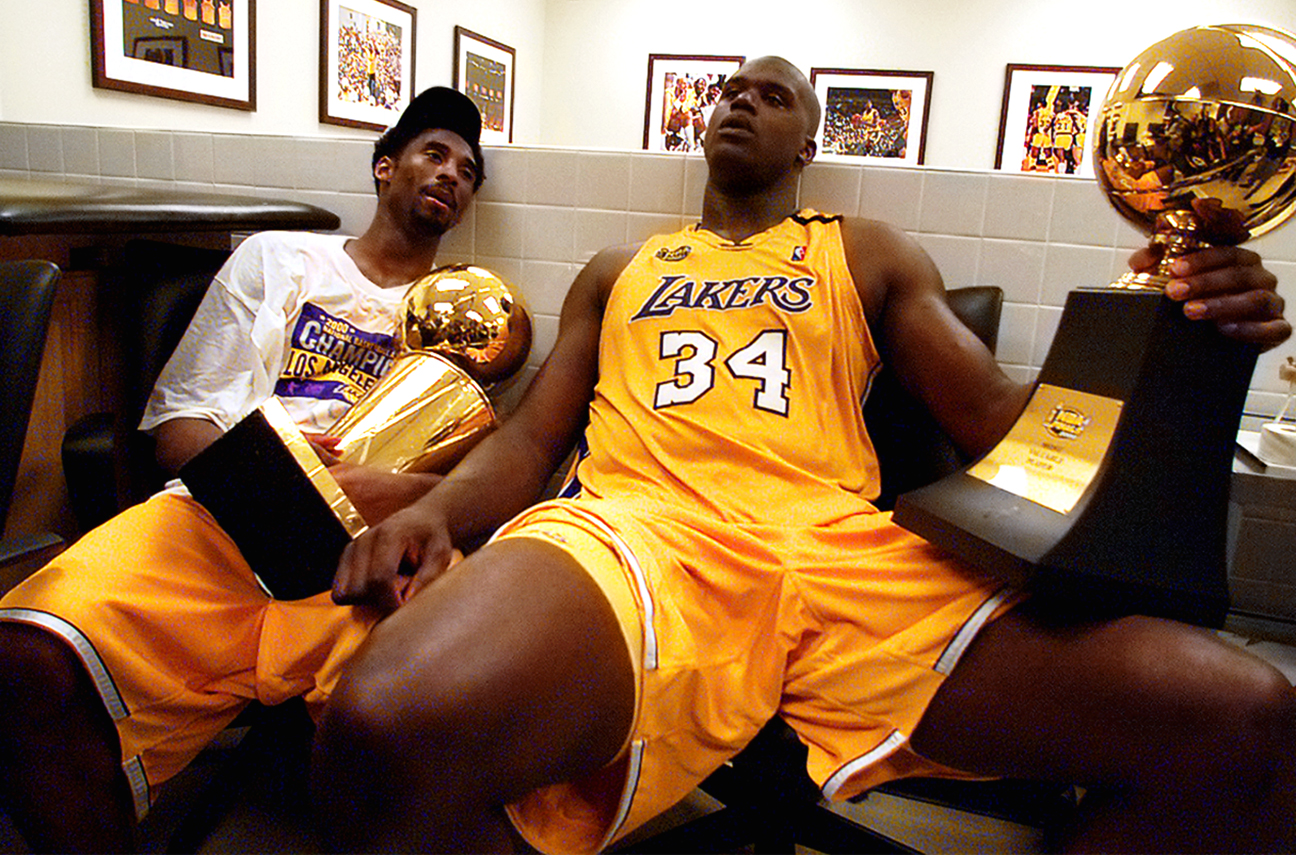 Paul Morse, Los Angeles Times: "This moment was after Kobe and Shaq won their first title. I went back to the Lakers' locker room after all the champagne and speeches to find Kobe and Shaq sitting in a back room, possibly the trainer's office, totally spent as they held the NBA Championship and Finals MVP trophies. I think they had finally realized how exhausting the championship run together really was."