or a century, life in Metlakatla has followed a pattern -- one that each generation embraces and eagerly continues. Fishermen and women tie their nets in the same musty wood storeroom and haul salmon from the same salty blue waters. They sing and dance the same Tsimshian songs.

And they play basketball.

Metlakatla's basketball obsession is partly geographic. It is located in a southern extremity of Alaska, the only town on Annette Island, and the only Native American reservation in Alaska. The indoor sport is a reprieve from the soggy darkness of winter, a unifying event for isolated people.

This remoteness, although cherished by residents, makes competing in sports difficult. It can take up to two days, one way, for the Metlakatla High School boys' basketball team to compete within their league. The draining effects of travel are a routine part of the game. To make the most of their time on the "road," Metlakatla teams play twice on consecutive nights before heading back home.

The paths traveled by the basketball team trace the routes their Tsimshian ancestors traveled when warring and trading with other coastal natives. Instead of paddling cedar canoes, players ride planes and ferries to their games. When traveling, players have the opportunity to do and see things unavailable in Metlakatla, like Chinese food and movie theatres. The main incentive for playing basketball, though, is at home.

In Metlakatla, basketball is the only show in town. People begin their Saturdays at 8 a.m. at the old town hall for little league games before shifting to the high school gymnasium to watch the Chiefs battle until 9 p.m. Many of those sitting in the packed bleachers played for the Chiefs or Miss Chiefs themselves, and young children dream of when it will be their turn to represent their home. The legacy of the Chiefs matters little outside Annette Island, but inside, it is a key to life. 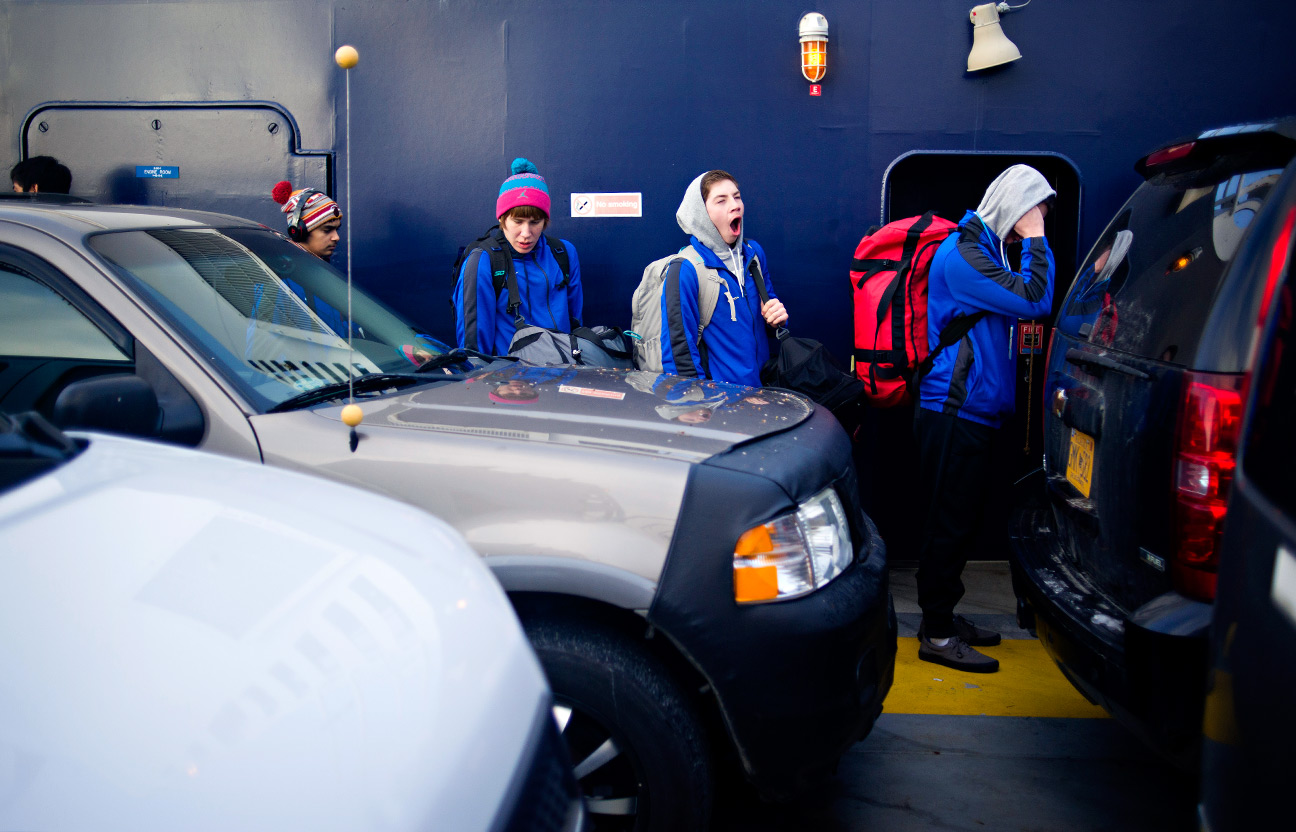 The Metlakatla High School boys' basketball team prepares to disembark from an early morning ferry trip on the M/V Lituya to Ketchikan, Alaska, on Dec. 28 to compete in a tournament. Ketchikan is the nearest city to Metlakatla, separated by 17 miles of water. 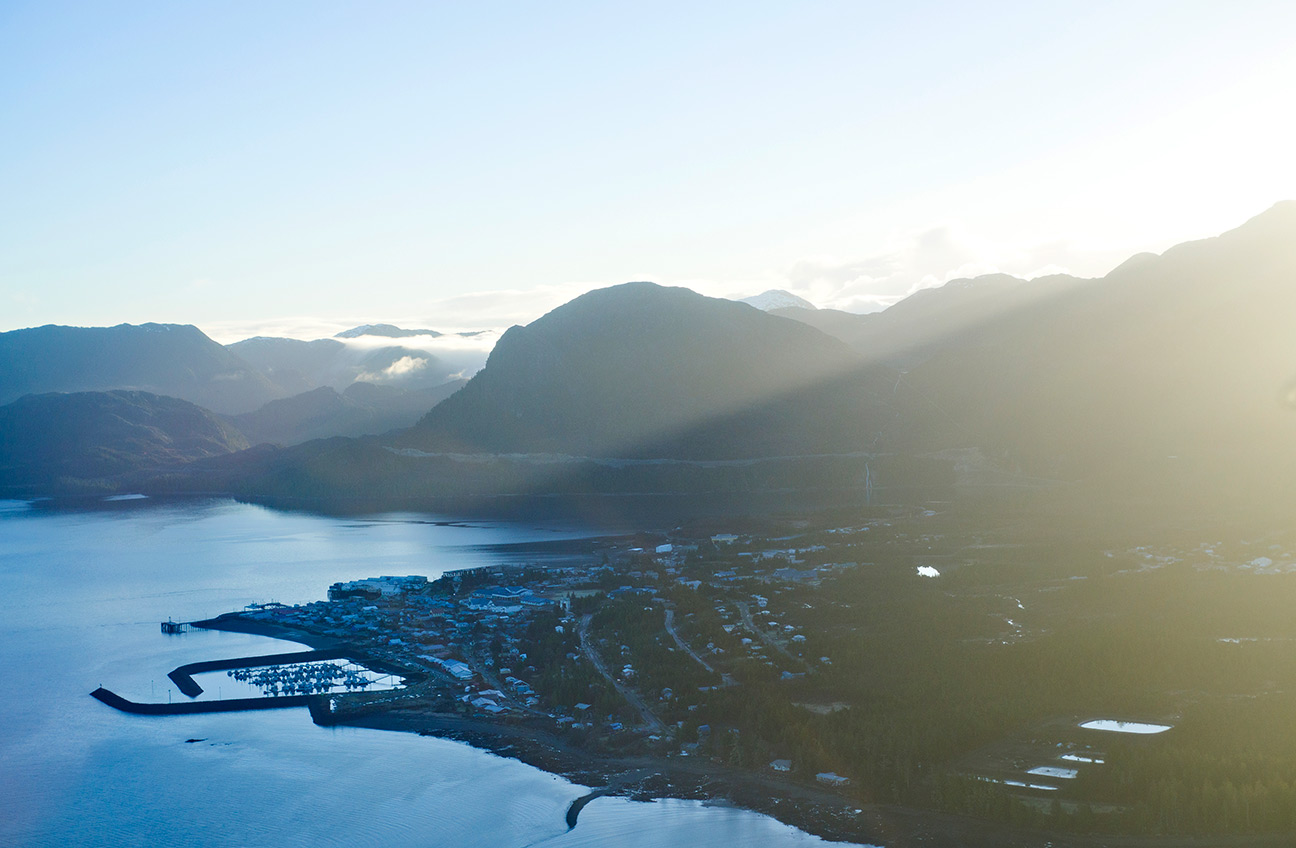 The sun rises on Metlakatla, Alaska, on Feb. 23. In 1887, William Duncan, a priest, led his Tsimshian congregation from British Columbia to Annette Island and established Metlakatla, Alaska, as a religious haven. Duncan was controversial, forcefully encouraging the abandonment of Tsimshian culture, but his legacy remains respected. 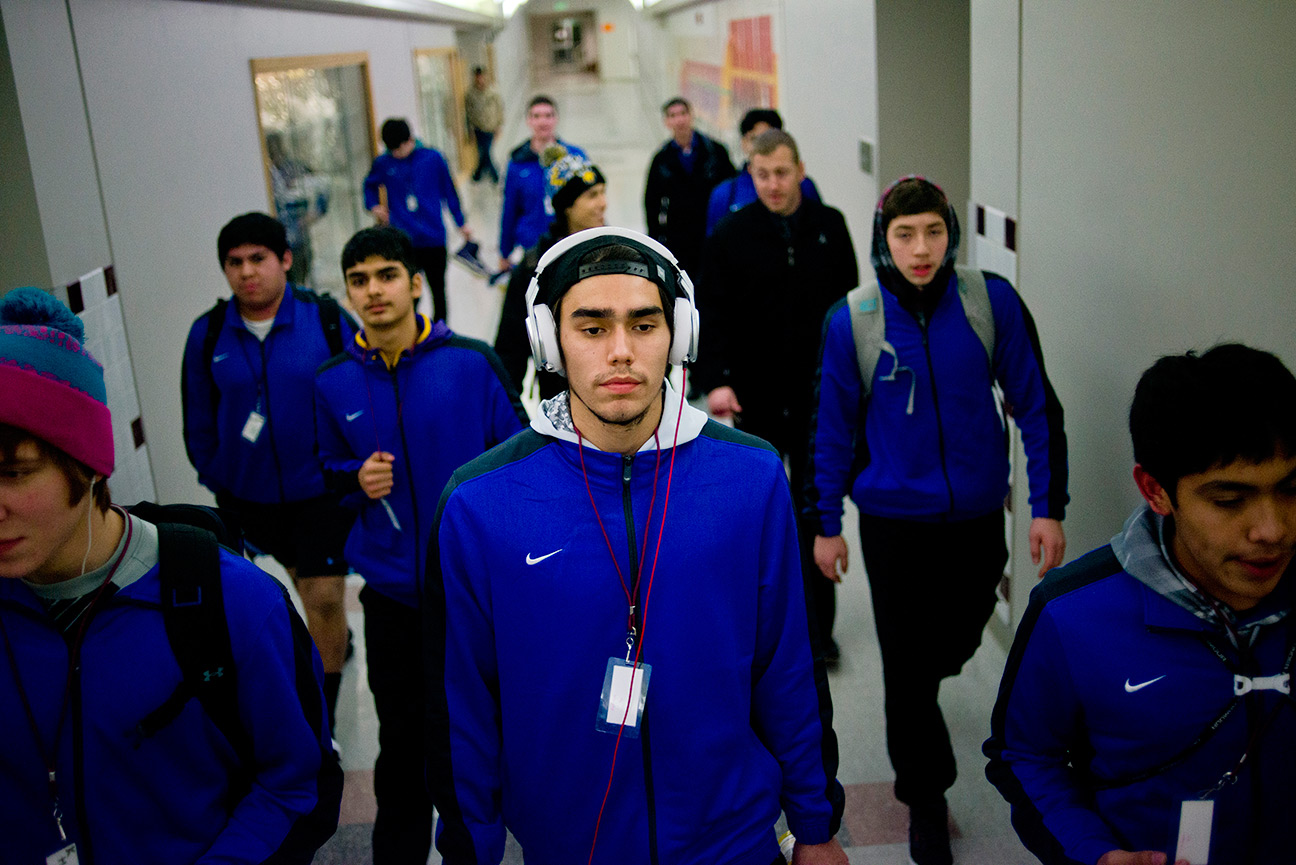 Zavier Ghormley, center, pictured during a tournament in Ketchikan, Alaska, on Dec. 28, was the only senior on the Metlakatla Chiefs during the 2015-16 season. Though the pool of potential talent is small with only 85 students enrolled at Metlakatla High School, nearly half of them suit up for the Chiefs or the Miss Chiefs basketball teams. 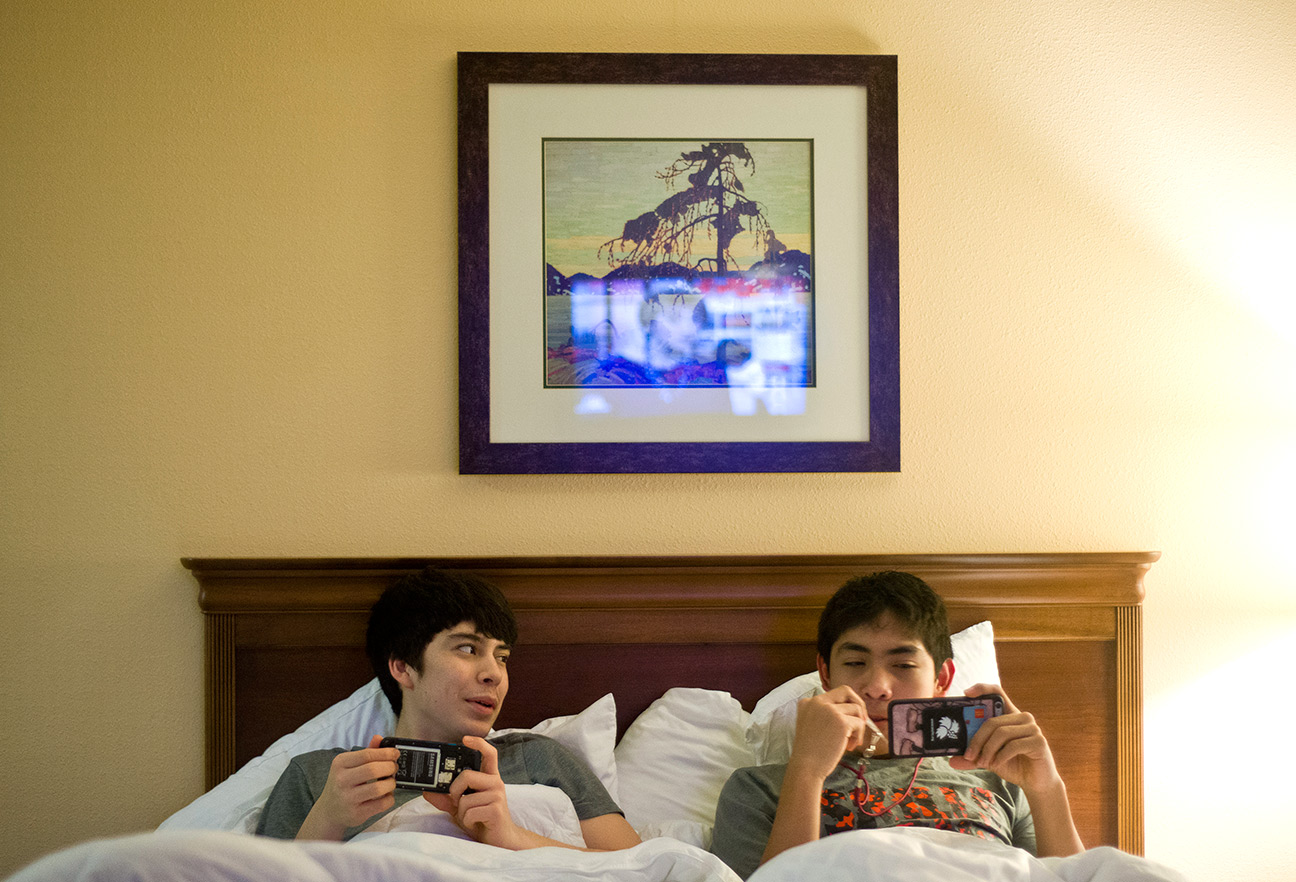 Tyler Henderson and Christian Hayward play billiards against each other on their phones while watching television at their home for the night: the Best Western in Ketchikan, Alaska on Dec. 29. 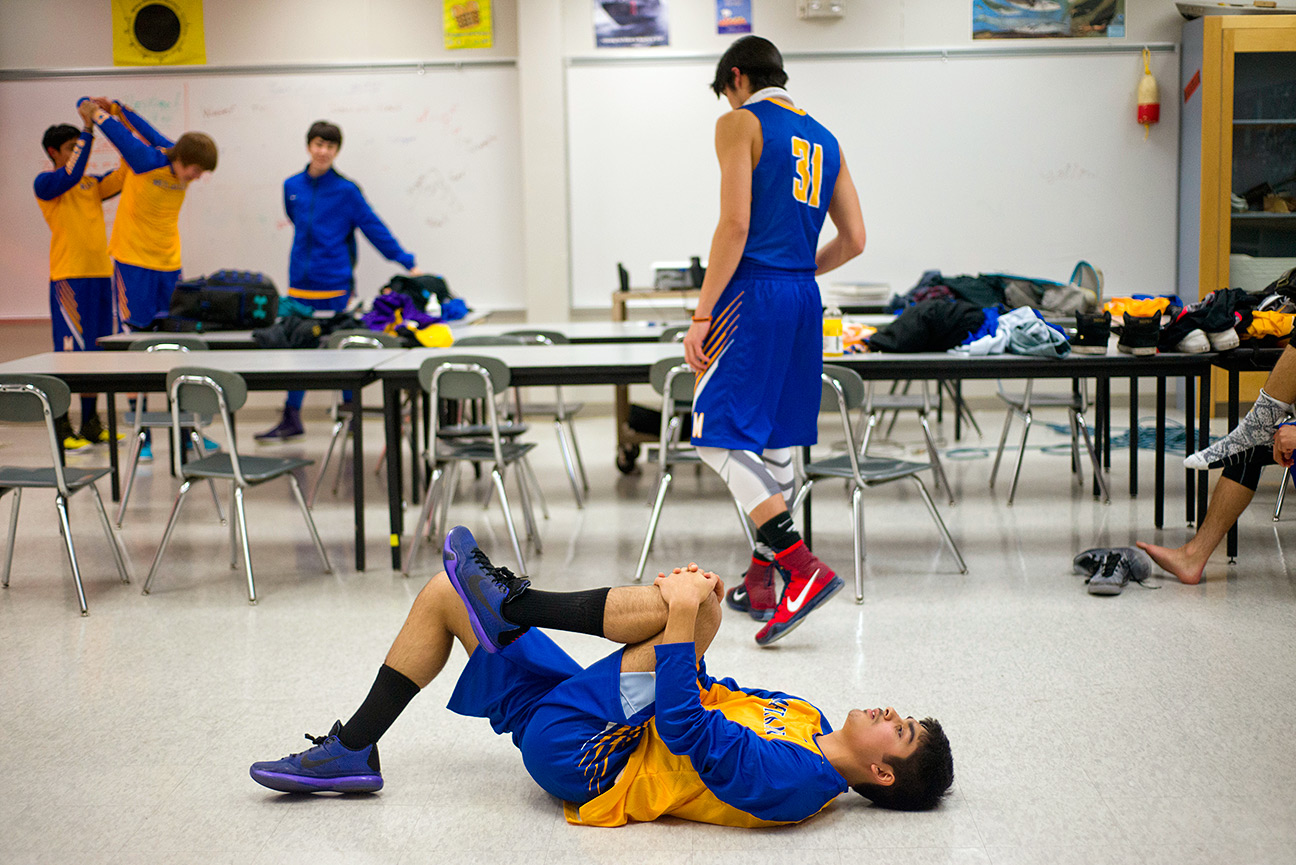 Metlakatla junior Trenton Clark stretches before a road game against Ketchikan on Dec. 28. Players learn to make good use of the spaces they're provided, preparing for games in classrooms or other makeshift locker rooms. 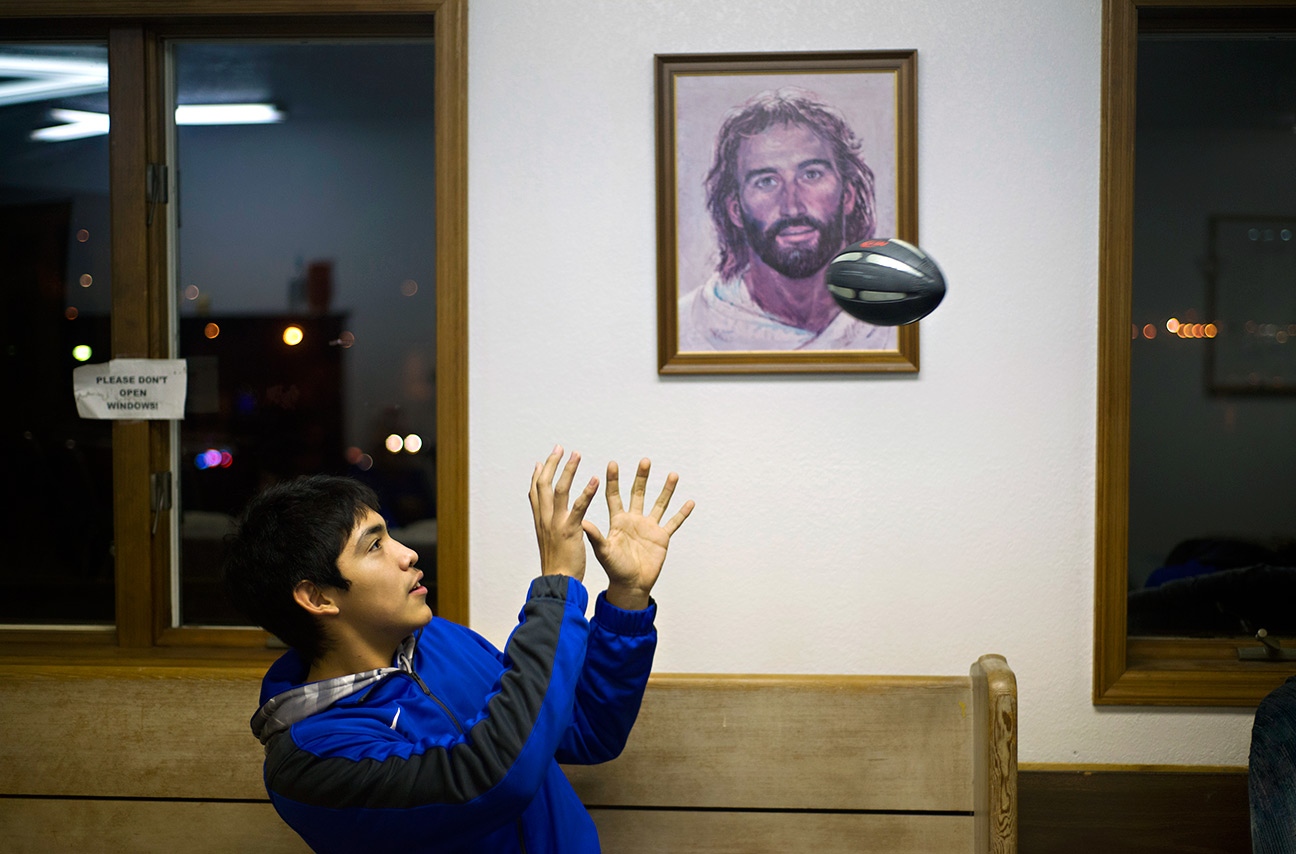 Christian Hayward catches a football in a recreation room at the First Lutheran Church in Ketchikan, Alaska on Jan. 14. The basketball team stays in the church to save money during overnight layovers to road games. 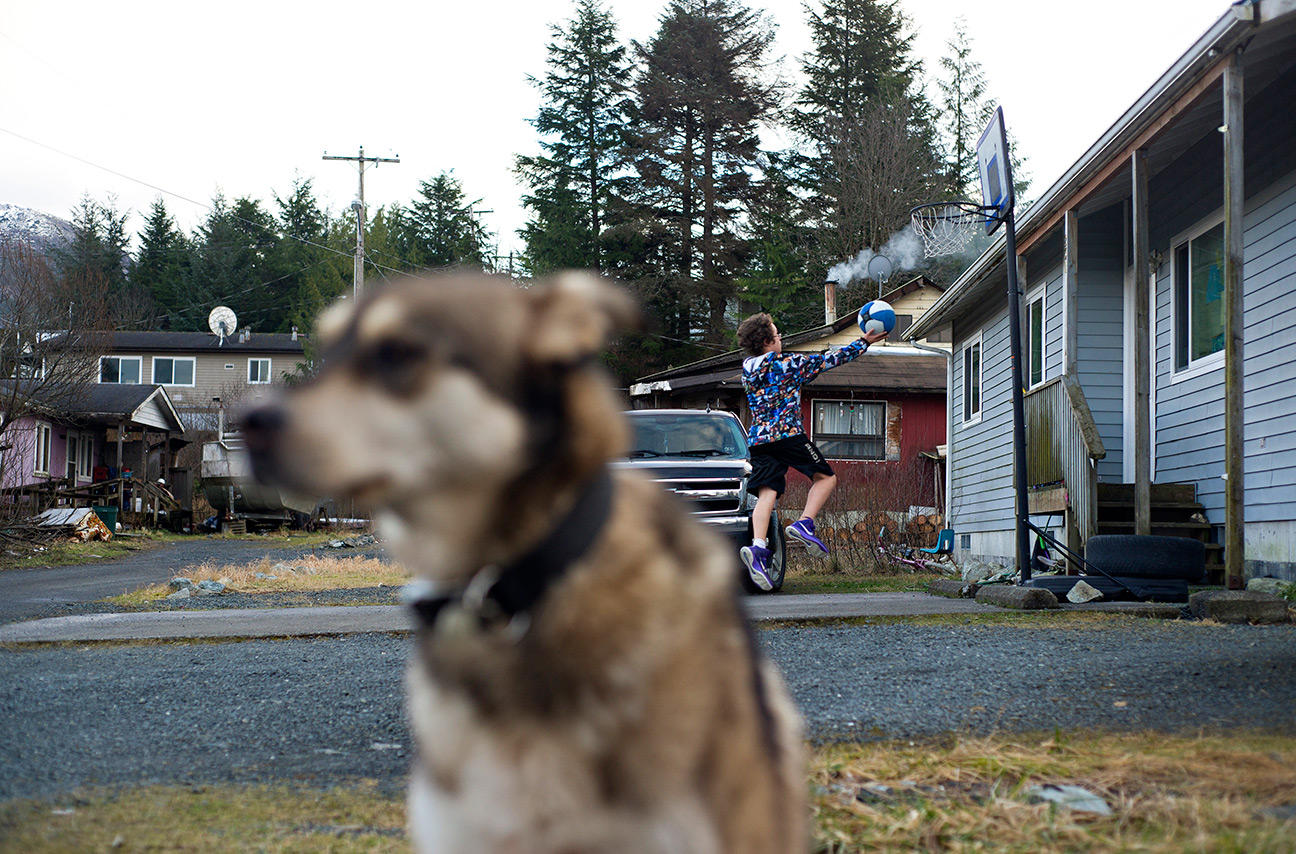 When the town of Metlakatla was a patchwork of wooden boardwalks, children would practice their shot on bicycle-rim hoops nailed to posts, inspired by the adult games they watched at the town hall. Now, David Valley, a 12-year-old aspiring Chief, shoots layups from a paved driveway outside his home on Jan. 30. 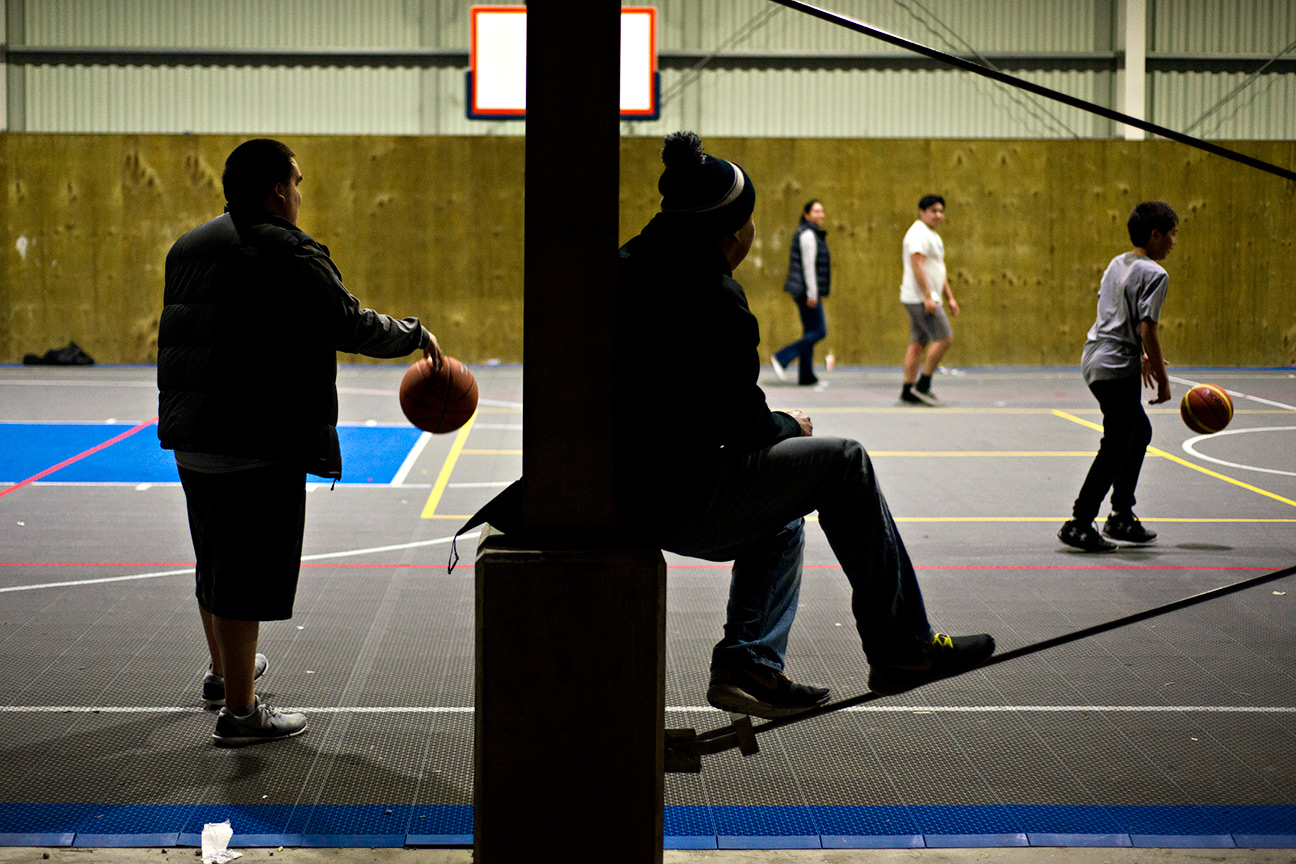 Ryan Nelson, 26, left, and Matt Atkinson, 22, center, watch people play basketball into the night at Charles Leask Middle School in Metlakatla on March 16. Daily pickup games that run until the court's lights shut off at 11 p.m. are an important social activity. 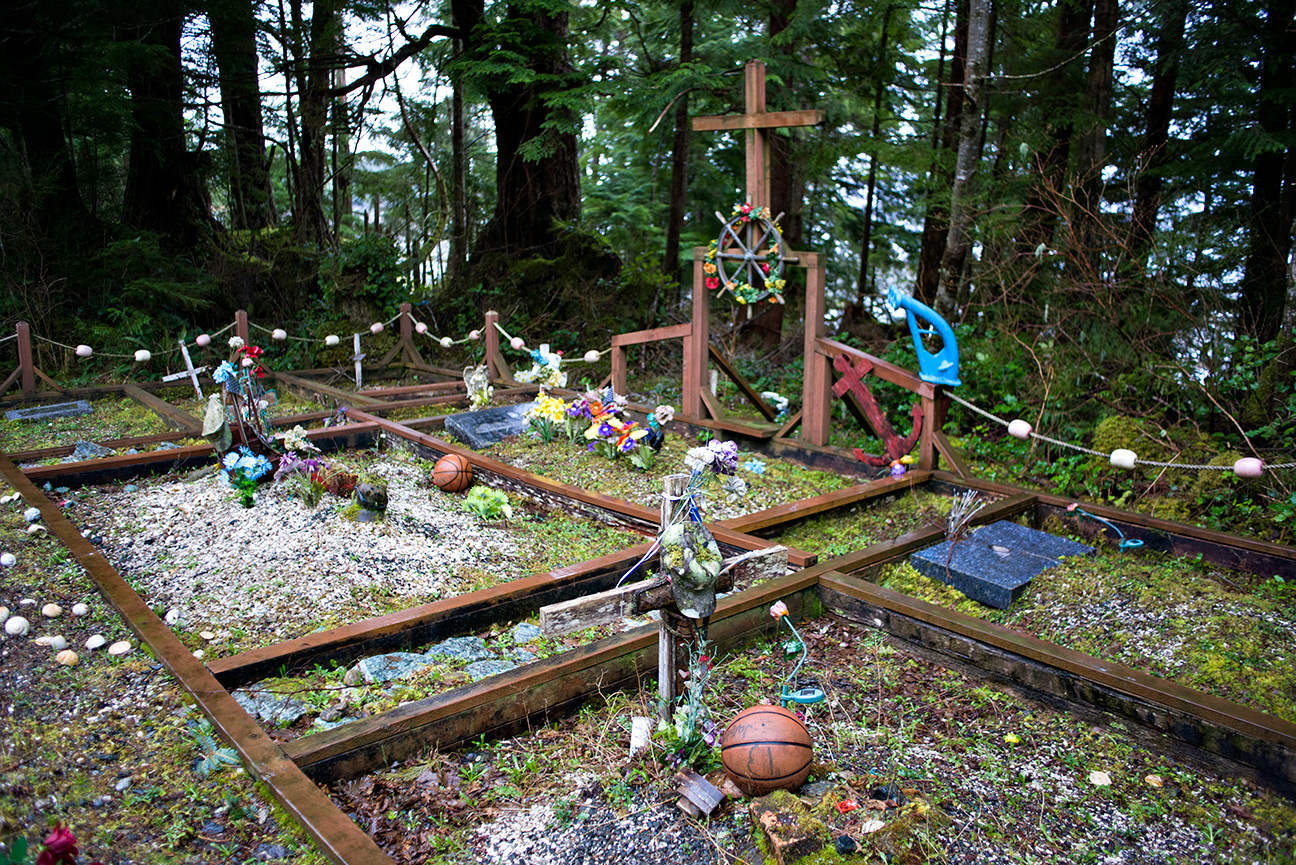 Important possessions left by the deceased in Metlakatla often adorn their gravesite, creating beautiful memorials for loved ones. Old fishing licenses, favorite hats and, for former Chiefs and Miss Chiefs, basketballs can be seen adorning gravesites. These invaluable possessions are not disturbed by the living. 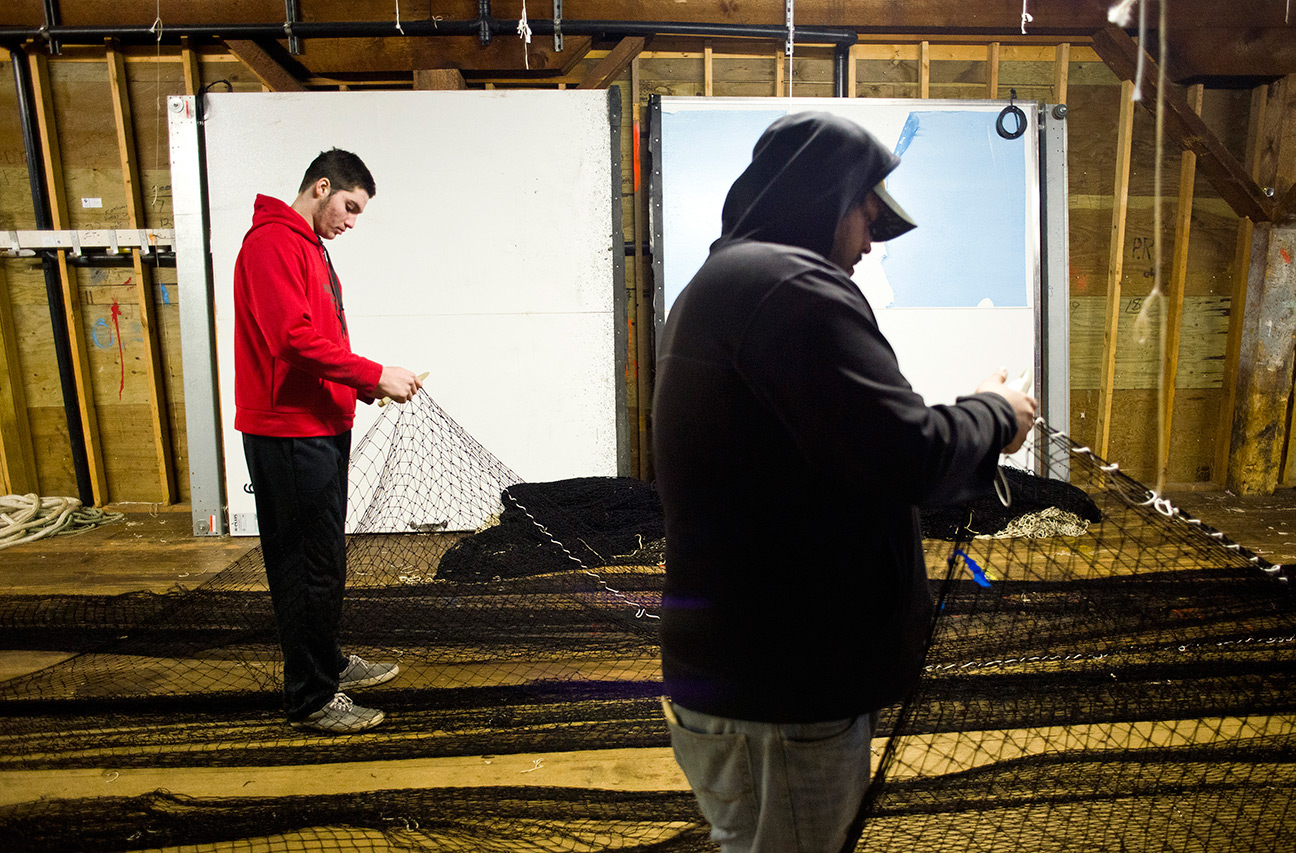 Sophomore Danny Marsden, left, and Charles Brendible, 31, stitch together seine nets on March 17 in preparation for the summer fishing season on the F/V Samantha Rae. Young fishermen can make $40,000 in a good summer, which encourages many to stay in the community after high school. 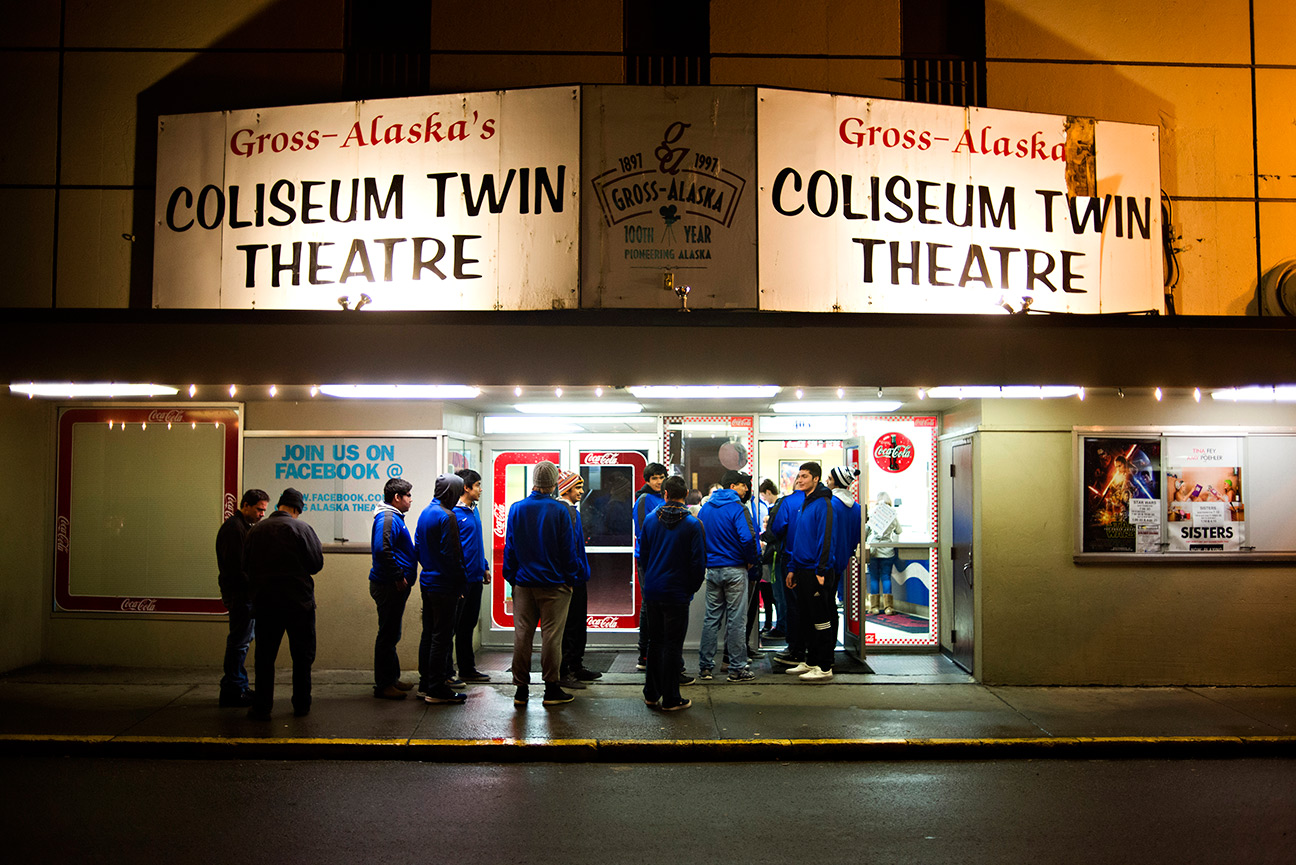 The Metlakatla boys' basketball team lines up to buy tickets to see their choice of "Star Wars: The Force Awakens" or the comedy "Sisters" at the Coliseum Twin Theatre in Ketchikan, Alaska on Jan. 14. Entertainment options in Metlakatla are limited, so the team frequently takes the opportunity to see a new movie. 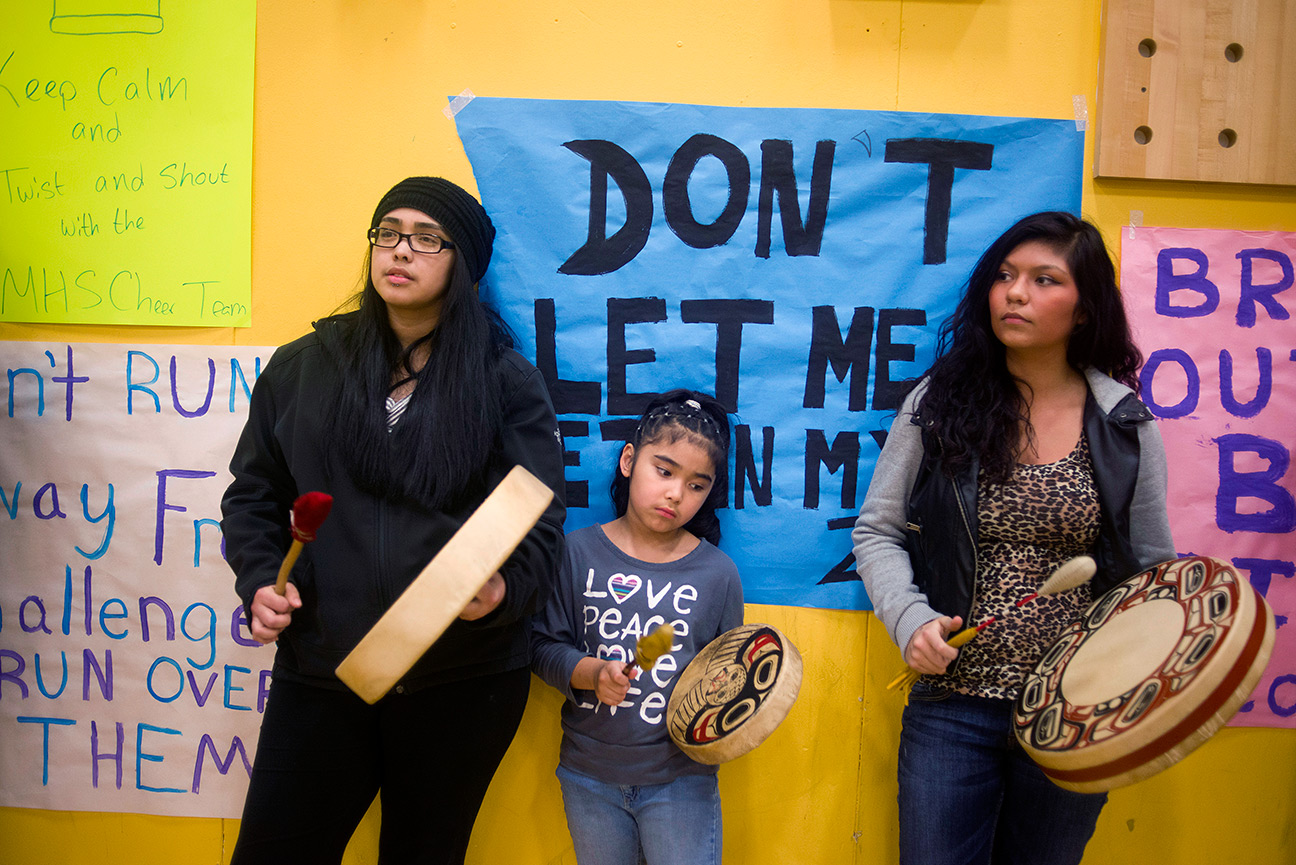 Candace Dundas, left, her daughter Alexis Gonzalez-Fawcett, 7, and Shayne Guthrie beat traditional drums while the Metlakatla Miss Chiefs starting lineup is announced before a home game against Haines on Jan. 29. With much of the town in attendance, basketball games are a venue to celebrate Tsimshian heritage. 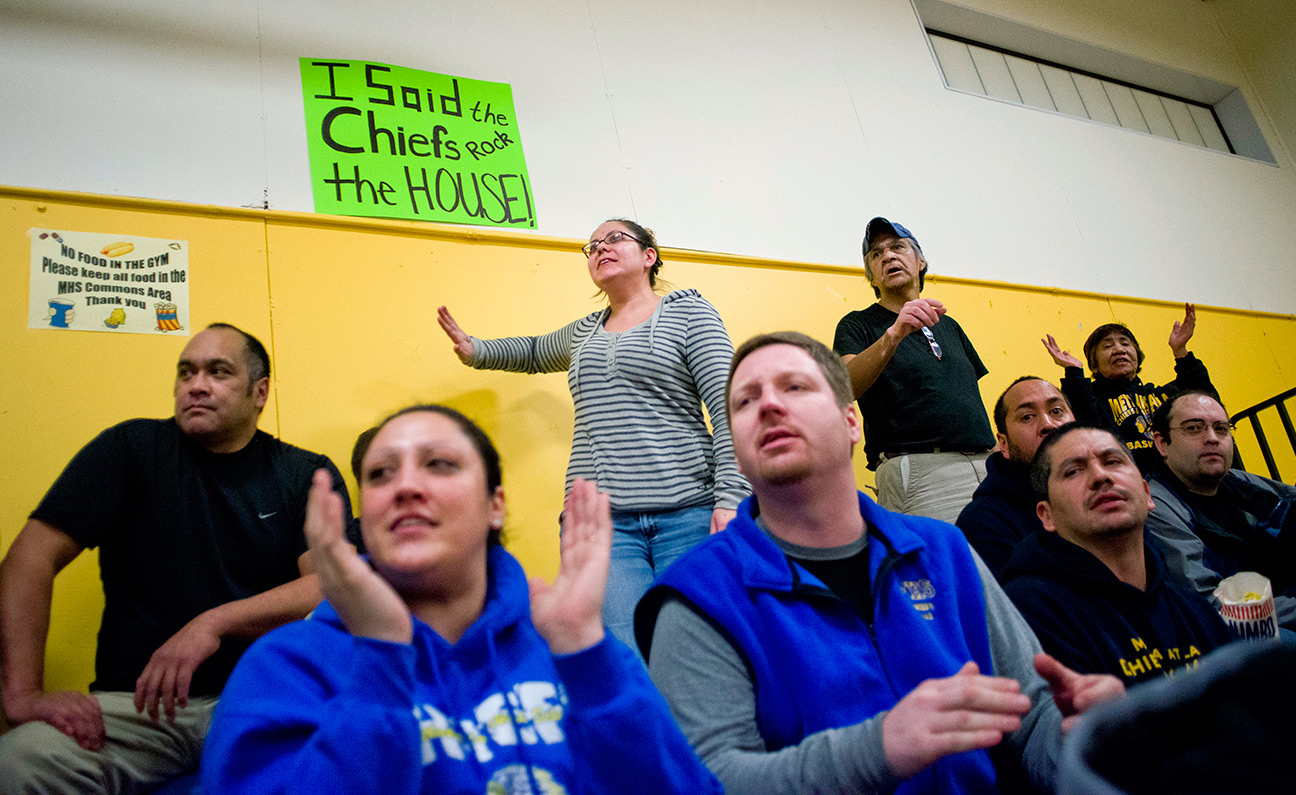 Metlakatla fans chat, "Wayi-Wah, Wayi-Wah, Wayi-Wah!" to help carry the Chiefs to a close win against Petersburg at home on Feb. 20. "Wayi-Wah" is a Tsimshian encouragement, roughly translating to, "Let's go!" 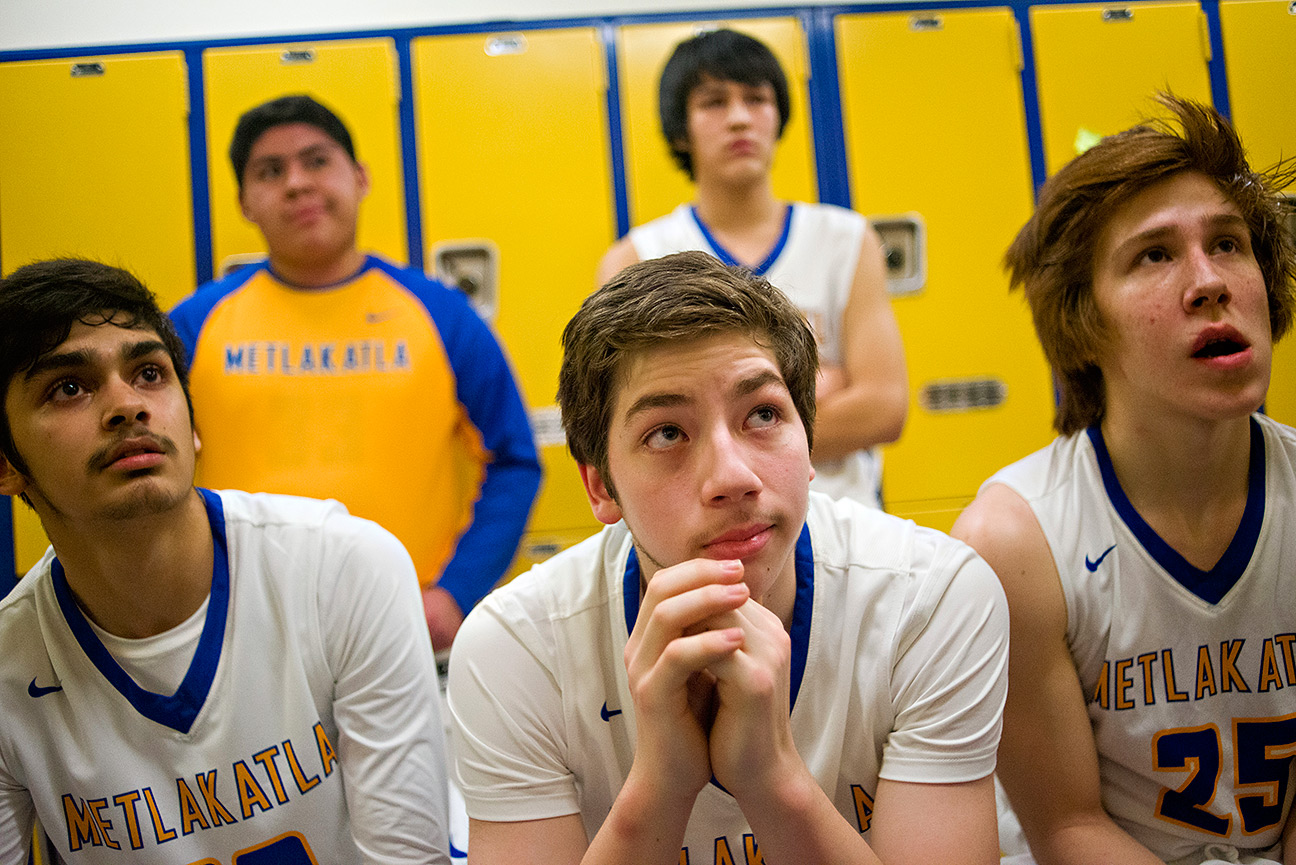 Trenton Clark, left, Desmond King and James Henderson look up to their coach, T.J. Scott, at halftime during a home game against Haines on Jan. 29. 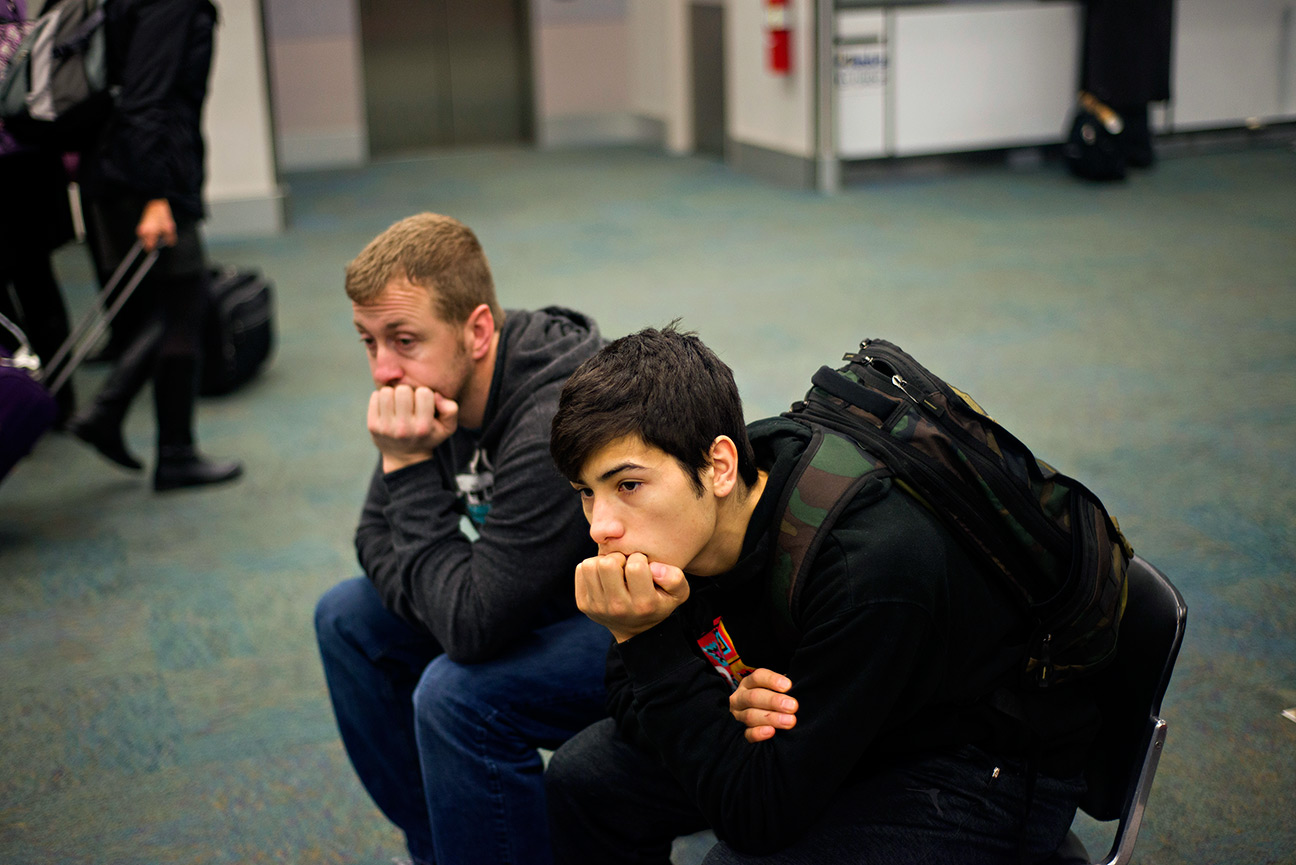 Coach T.J. Scott and junior Carsen Winter wait for their bags at the Ketchikan airport. In order to play two games in Haines, the farthest school in their conference, the Chiefs and Miss Chiefs were away from home for five days, three of which were spent traveling. 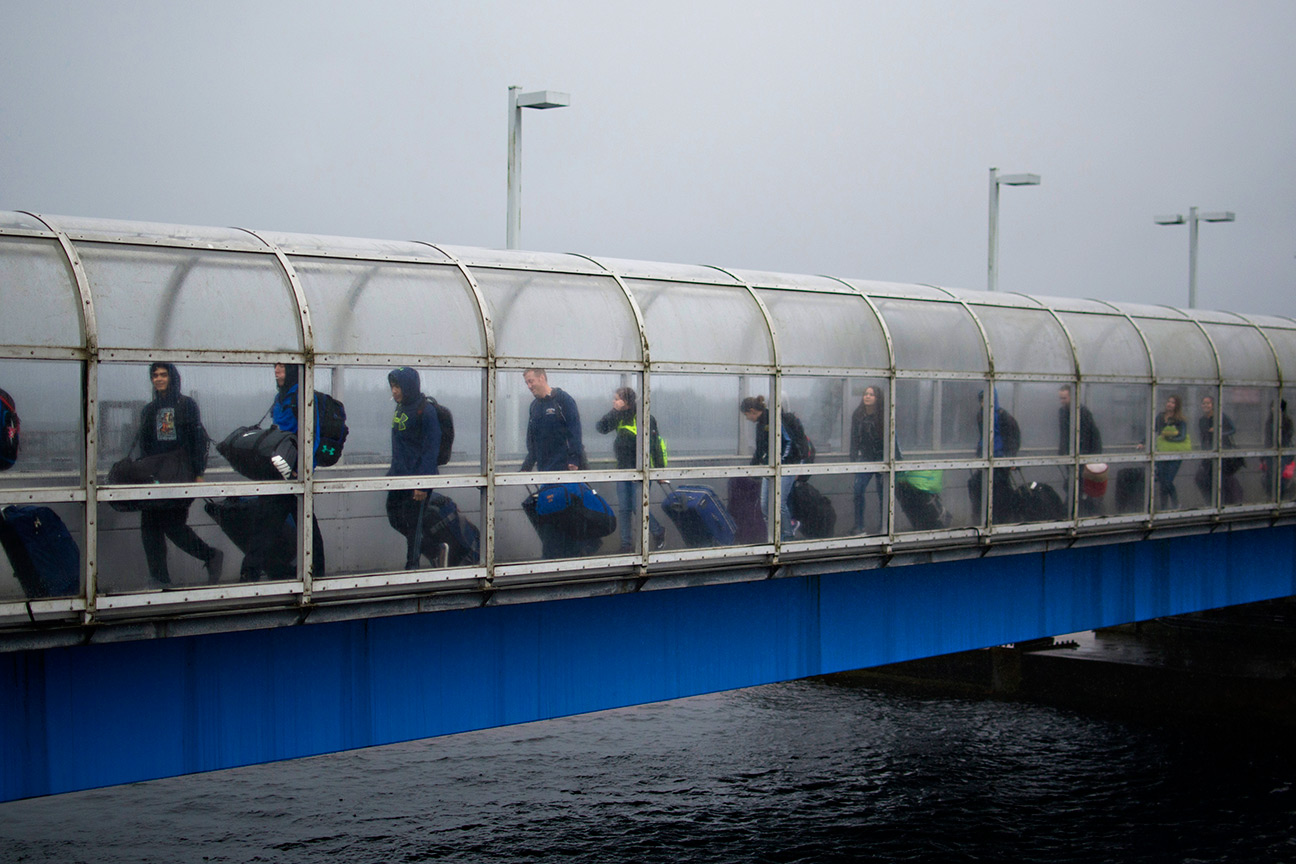 The Metlakatla Chiefs and Miss Chiefs disembark the M/V Lituya in Ketchikan during a trip to Haines on Feb. 25. All commercial travel out of Metlakatla goes through Ketchikan, and the city becomes familiar during basketball season. 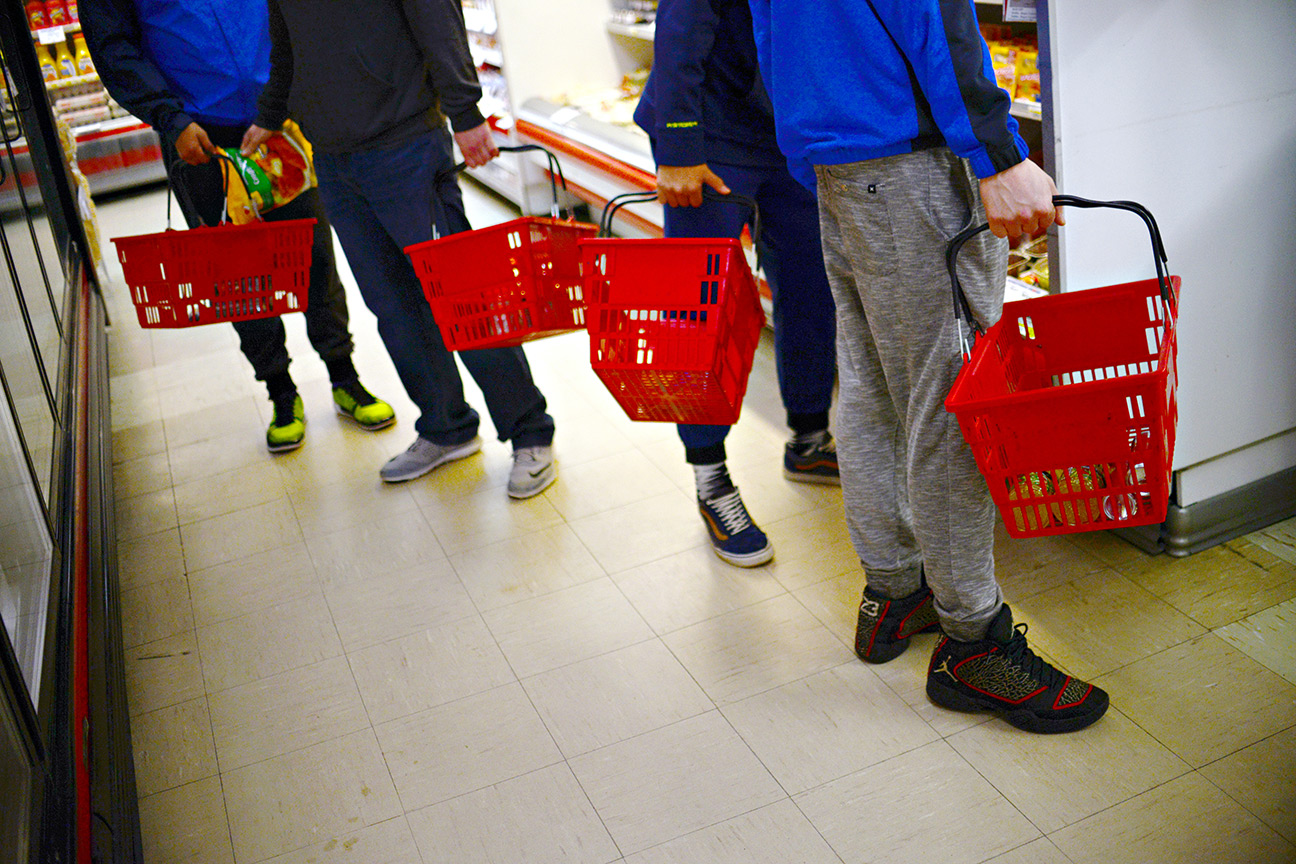 C.J. Hudson, left, coach T.J. Scott, Christian Hayward and James Henderson shop for groceries in Haines, Alaska, on Feb. 27. Traveling allows players to assume a greater independence, although still under the supervision of Scott, who checks Hudson's basket for items with too many carbs or sugars. 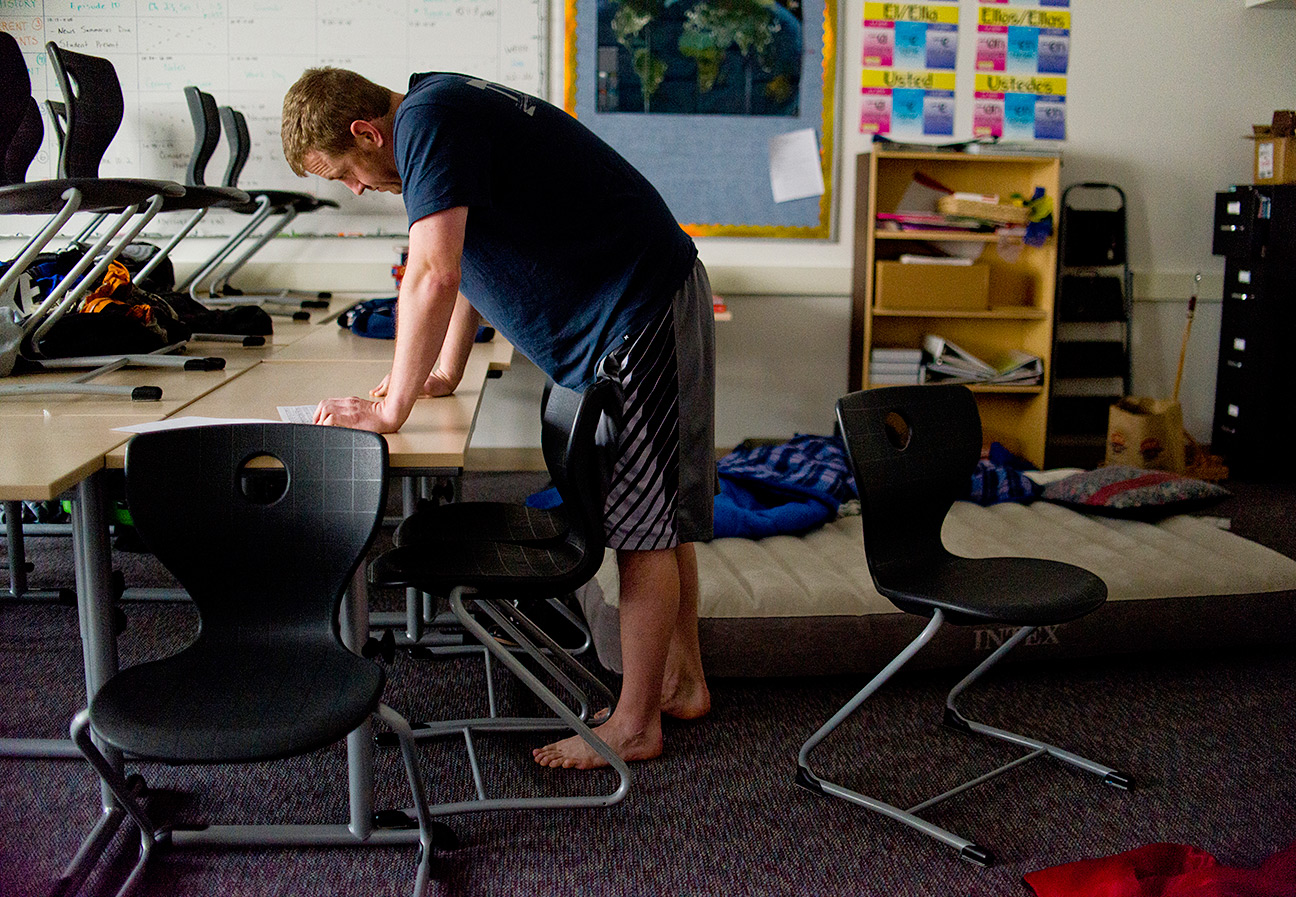 Head coach T.J. Scott looks over the previous night's stats in the classroom-turned-sleeping quarters he shares with his team in Haines, Alaska, on Feb. 27. Scott moved to Metlakatla four years ago from Walla Walla, Washington, to teach math and coach. 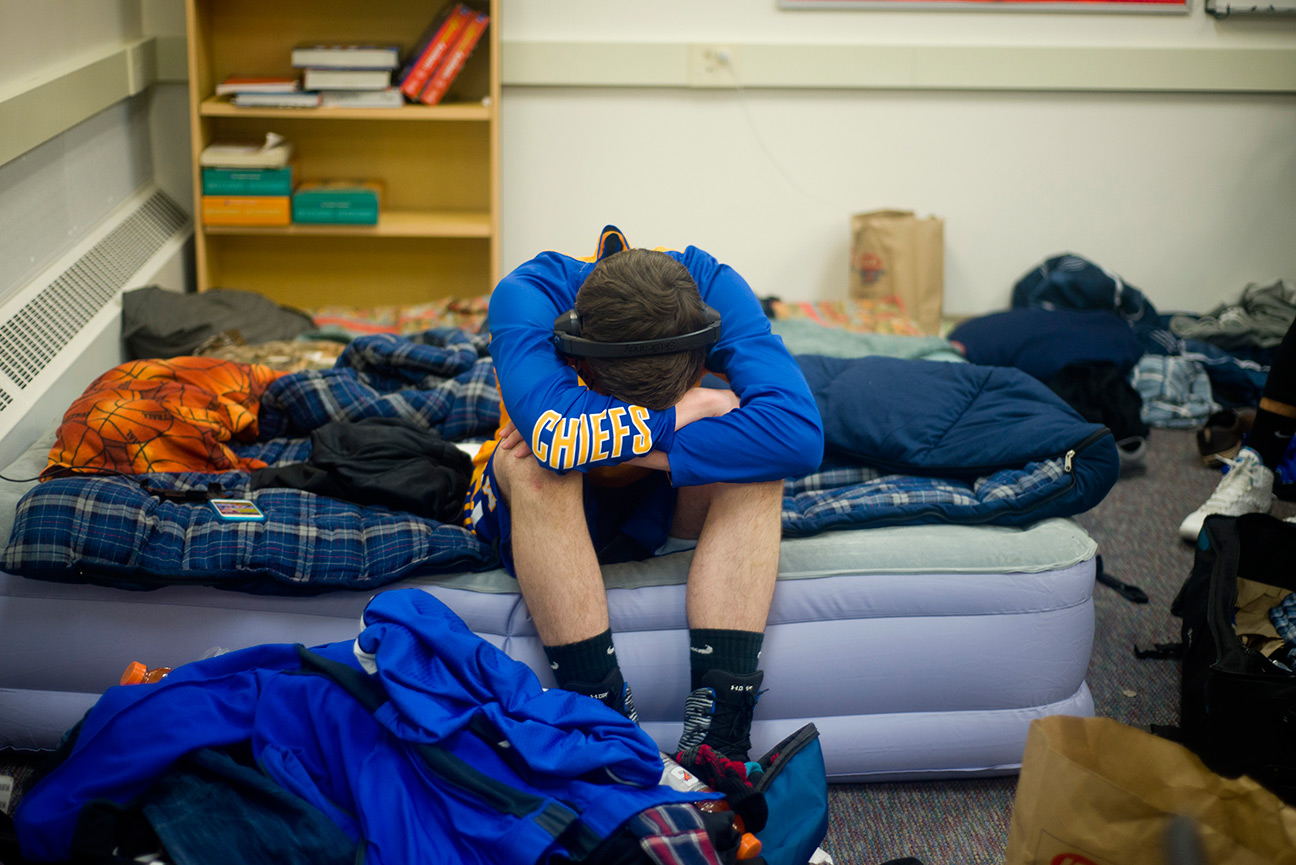 Desmond King listens to music on his air mattress before a game against Haines on Feb. 27. The home-court advantage for the Chiefs' opponents is magnified when the visiting team must travel 400 miles and sleep on a floor. 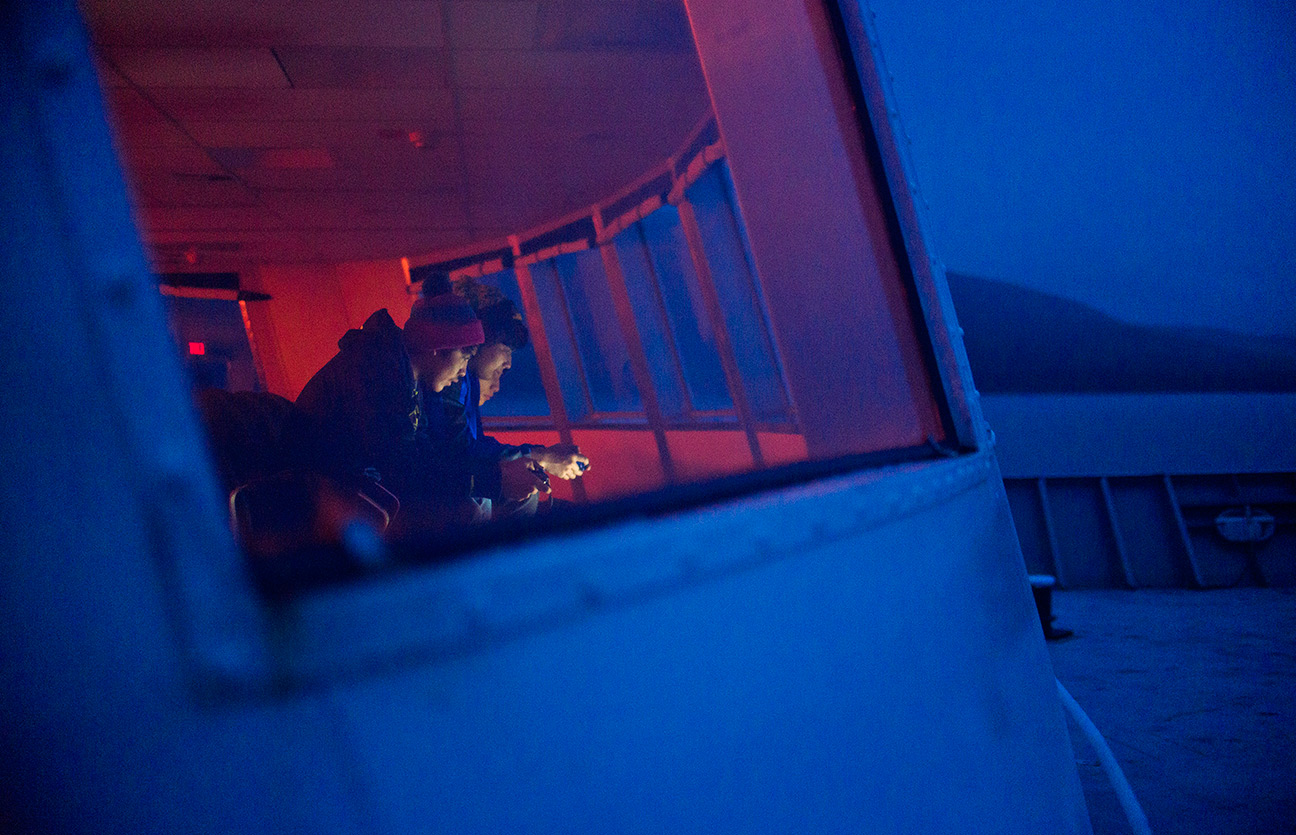 Christian Hayward and C.J. Hudson play "Call of Duty: Blacks Ops II - Zombies" while riding the M/V LeConte back to Juneau from Haines on Feb. 28. The scenic route is nearly identical to those of the major cruise lines that ply the Inside Passage during the summer, but has become somewhat routine for the Chiefs. 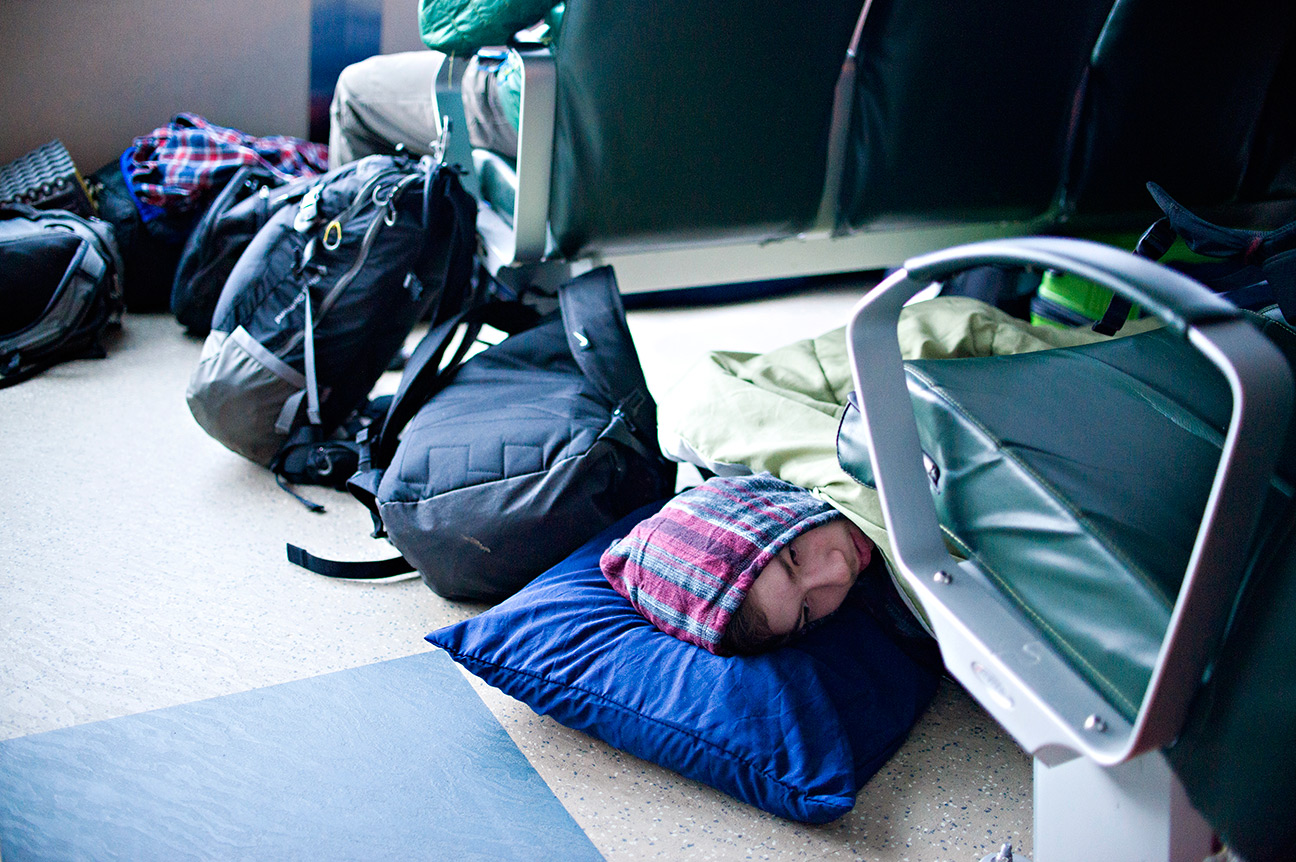 Desmond King tries to find sleep on the M/V LeConte on Feb. 26. Before the Alaska Marine Highway system, teams would charter local fishing boats to take them to games up the Inside Passage. Those unfortunate enough to miss out on a bunk would sleep in the fish hold.