akmont has long held the reputation as one of the toughest courses in the world, even without water hazards or tree obstructions. The greens are lightning-fast, the fairways narrow and the rough impossibly deep. Irishman Graeme McDowell posted a practice swing on social media to share with fans just how challenging the shots around the green will be, the head of his club and the ball buried deep in the shaggy carpet.

The most daunting features of the course, though, are the bluffs. The legend goes that when Henry Fownes built the course in 1903, he planned for only 80 bluffs. However, when he or his son, former U.S. Amateur champion William Fownes, witnessed a player sending a ball sailing over a trench without breaking a sweat, they ordered another dig in the dirt. By the time the course was complete, there were more than 300 bunkers and more sand on the green than there is at the beach. Luckily for today's golfers, that number is down to (a still unbelievable) 210.

"When I played it six weeks ago, there was very compact sand, and that meant that if the ball trickled into the sand, it wasn't a bad shot," Jordan Spieth told PGA.com. "Just barely went into the sand, you could hit the green no problem [if] you hit a good, solid shot. They have dumped so much sand into these bunkers, and now it is so tough to get a clean strike on the ball."

For photographer John Huet, heading to Oakmont for the 2016 US Open is a homecoming. He grew up about 10 miles away from the course in Tarentum, Pennsylvania, and took his first professional sports photographs there as a teenager. While he is at ease returning to the course, the same cannot be said for the players. 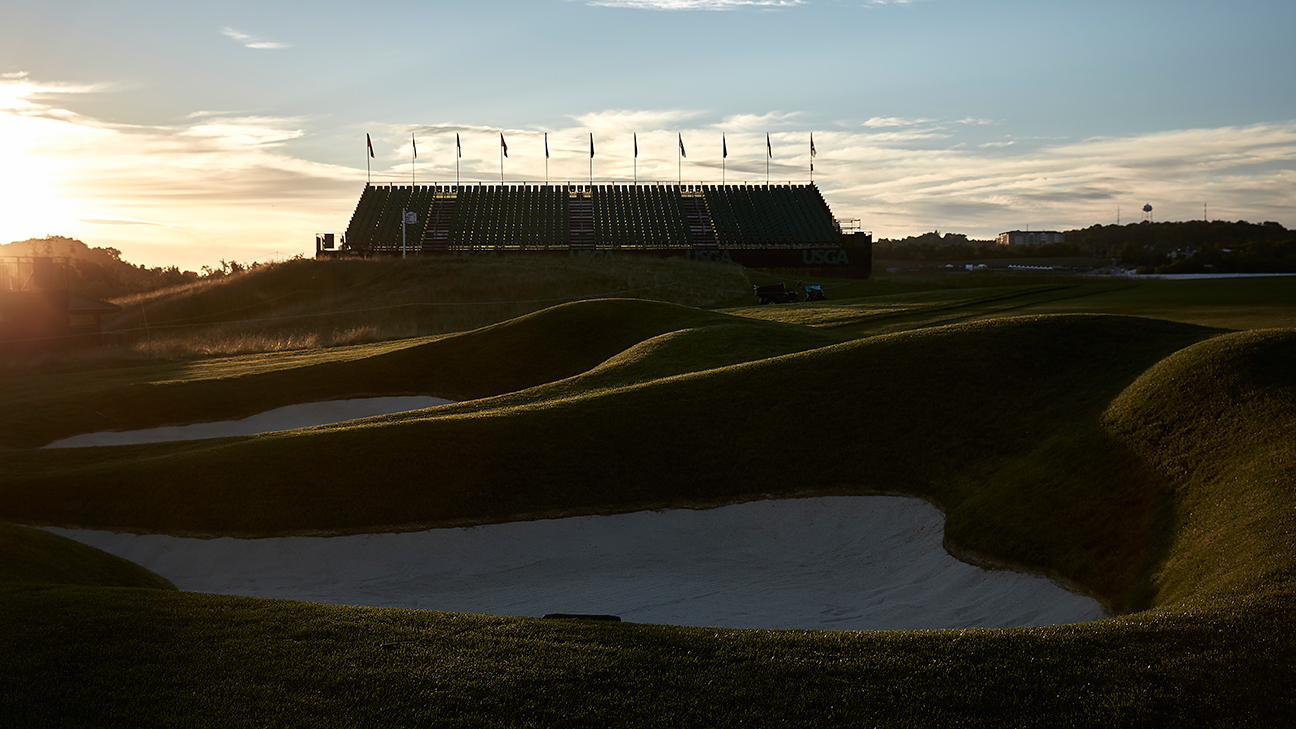 The beautiful (but daunting) bunkers at the 17th green lie quietly waiting to challenge golfers before a practice round. 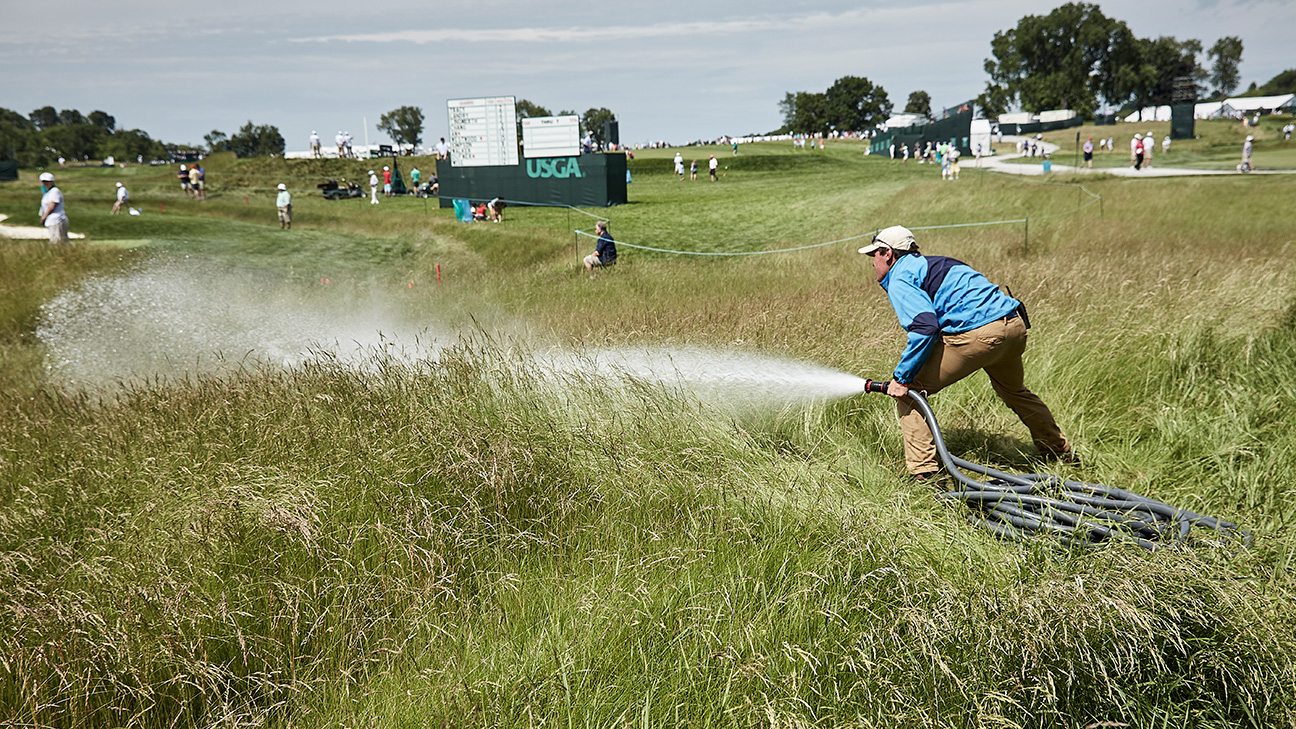 A groundskeeper sprays water on the deep rough by the second hole during the practice round on Monday. 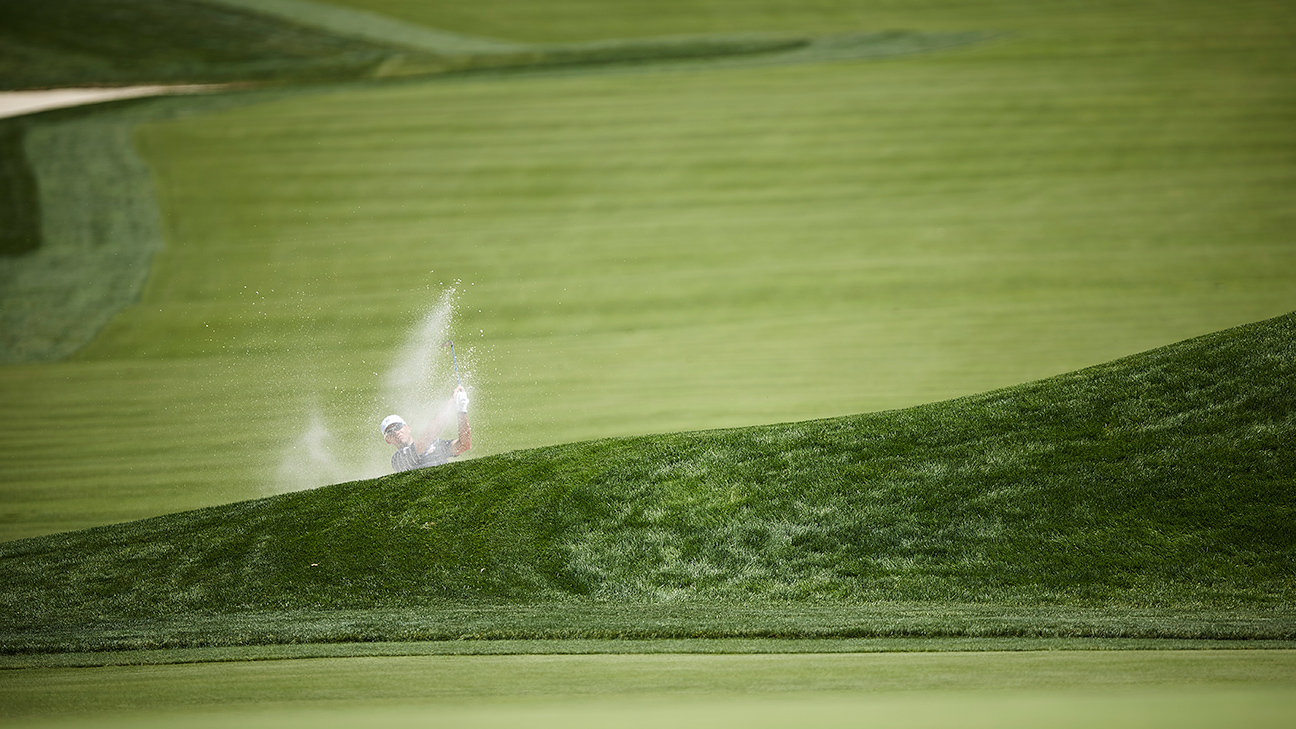 Jason Allred blasts out of a bunker on the 18th fairway with the hope that practice makes perfect. 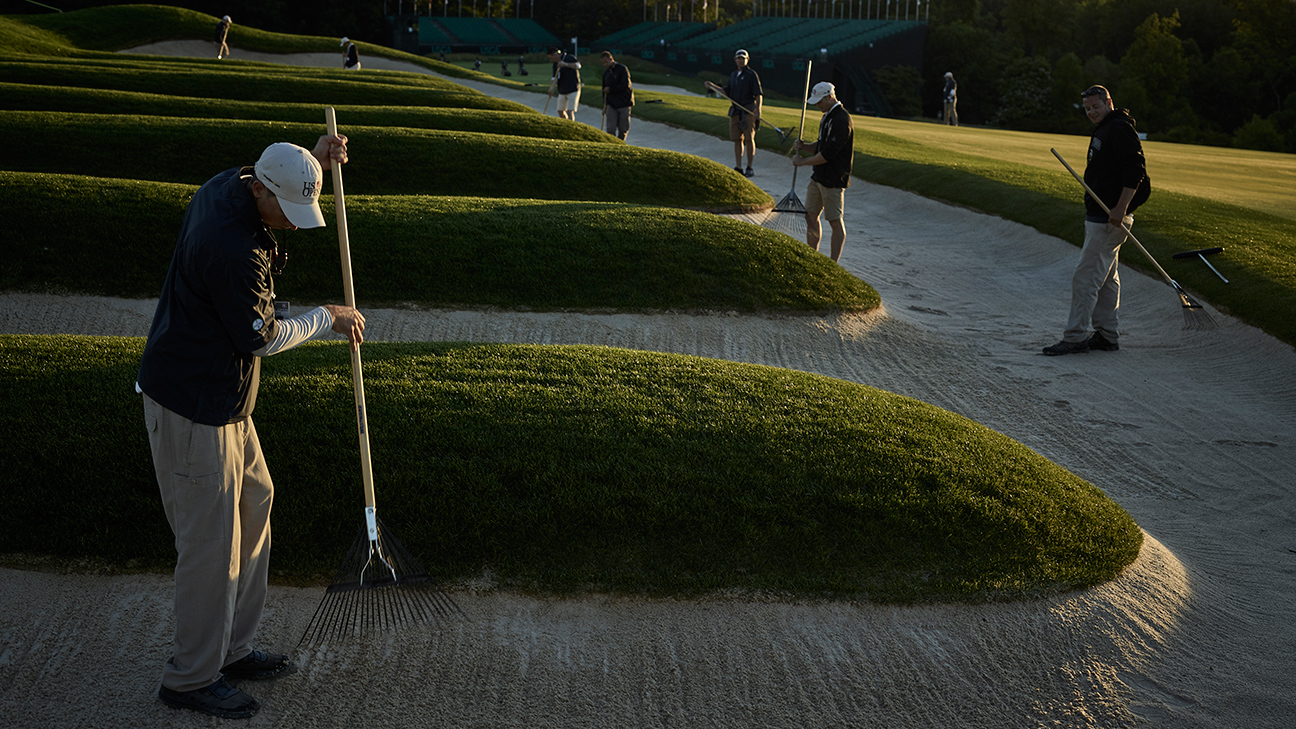 Course attendants rake out the mini-Church Pew bunker along the 15th fairway before the players take the course. 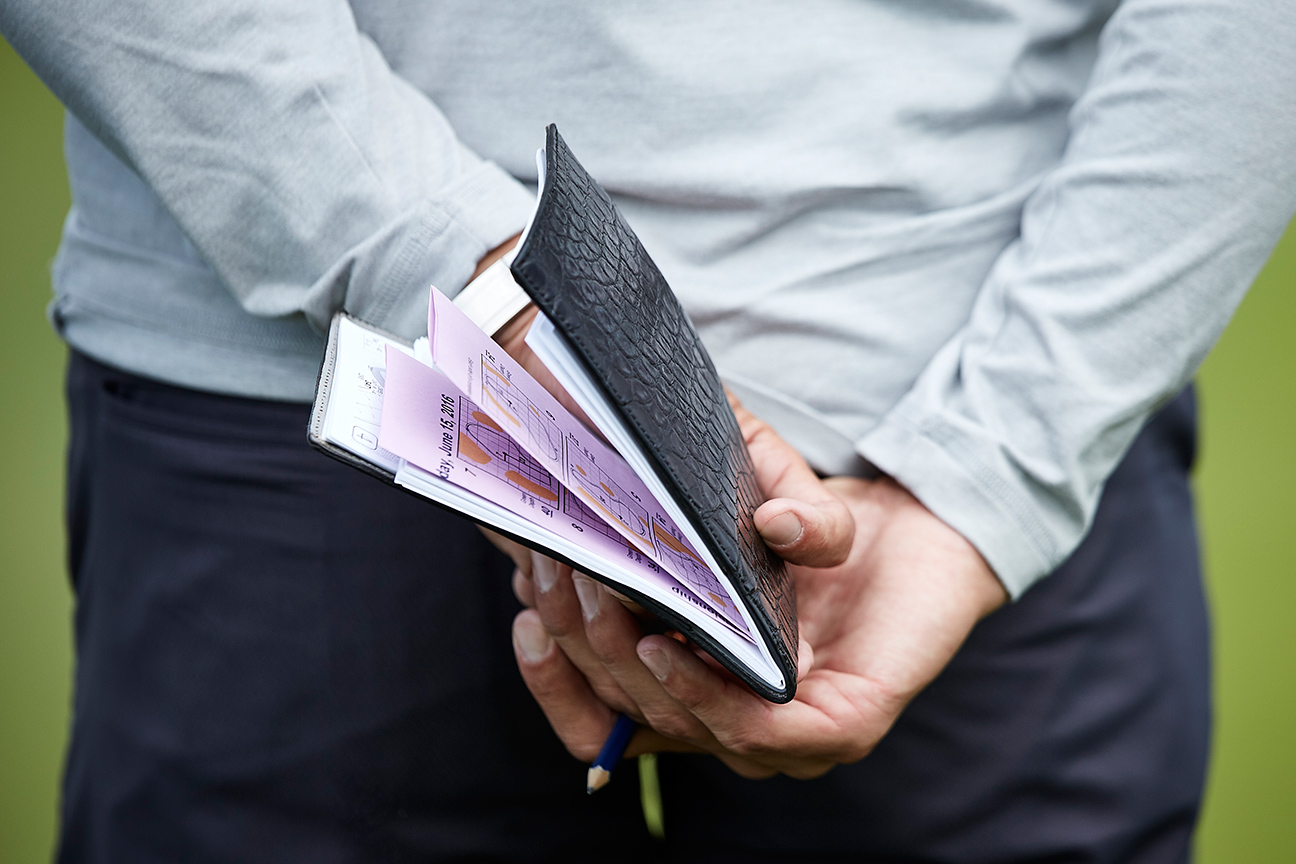 Rickie Fowler's caddie holds the all-important yardage book, which is the only tool the golfers have to navigate the course. 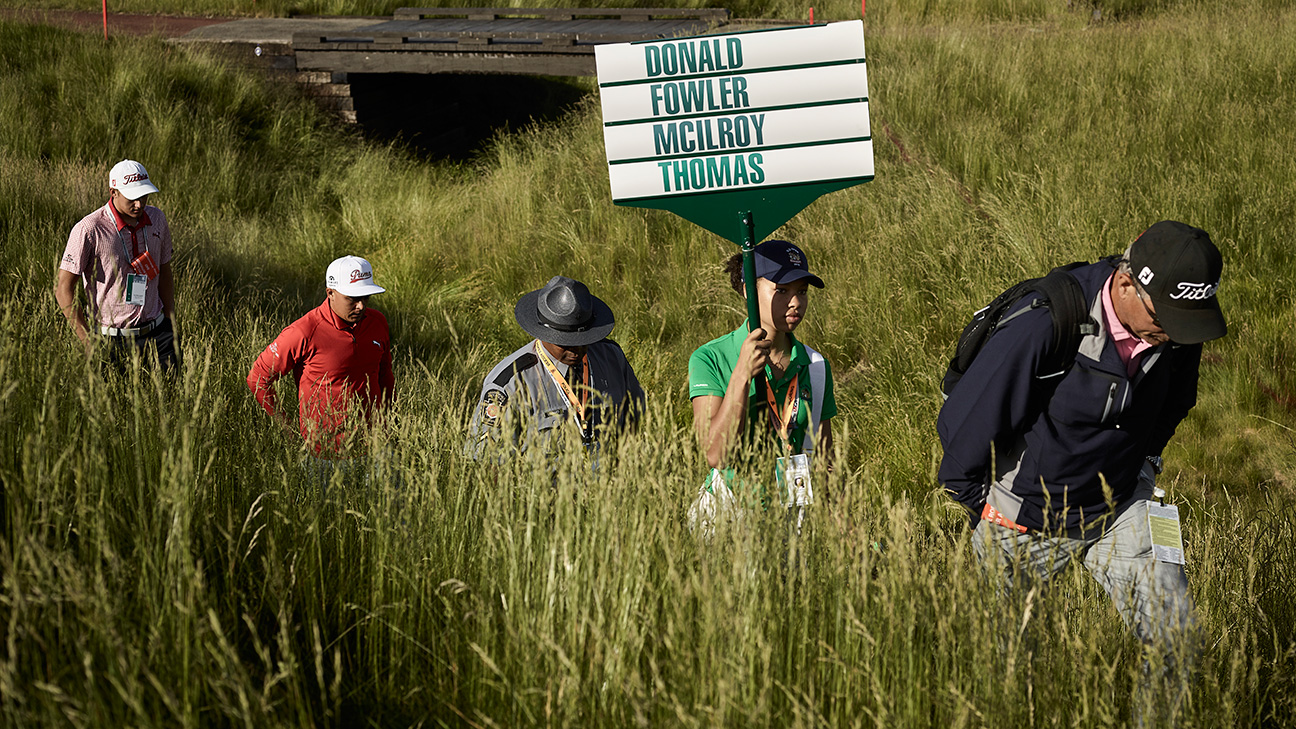 Accompanied by a small entourage, Rickie Fowler (in the red shirt) walks through the tall grass on his way to the tee box at the 11th hole during a practice round. 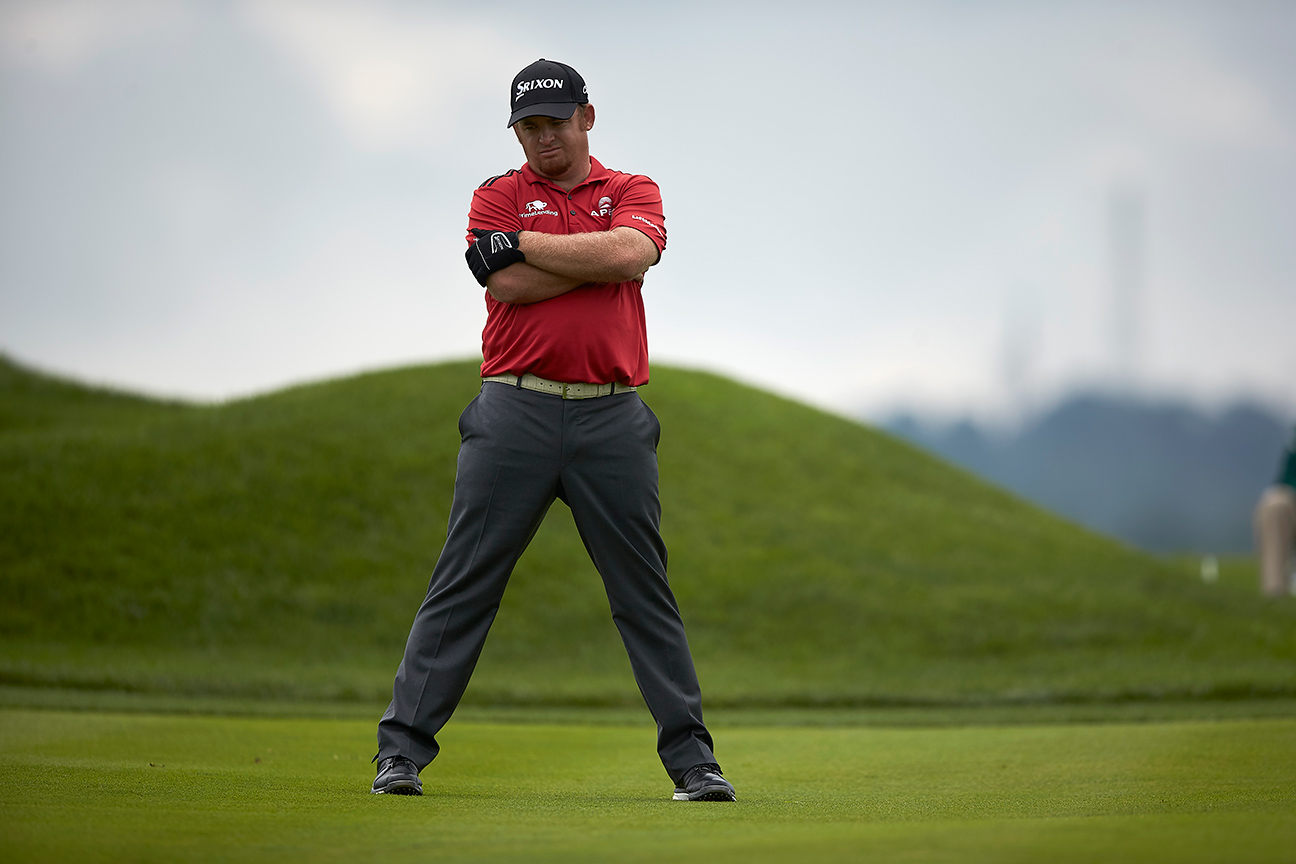 The body language of J.B. Holmes tells all as his ball lies in a sand trap on the fairway of 18th hole. 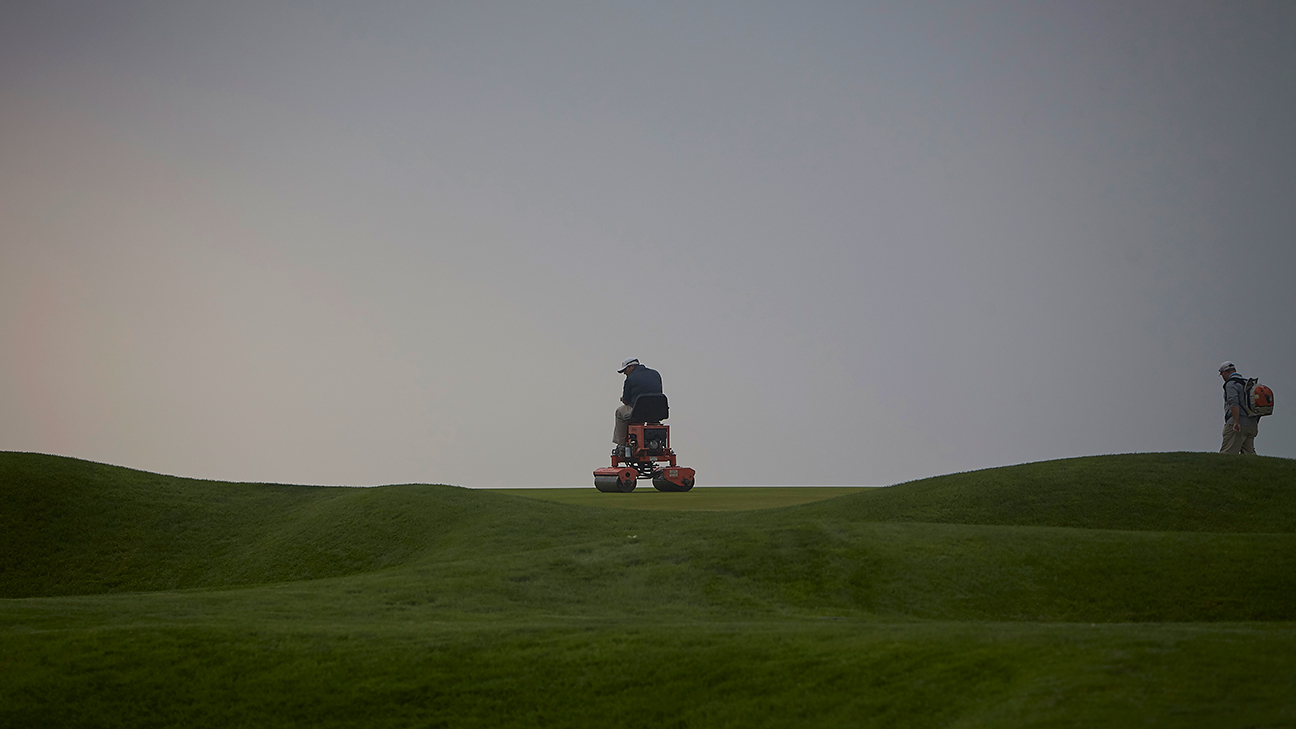 A green rolling machine puts the finishing touches on the 17th to ensure it will be firm and fast. 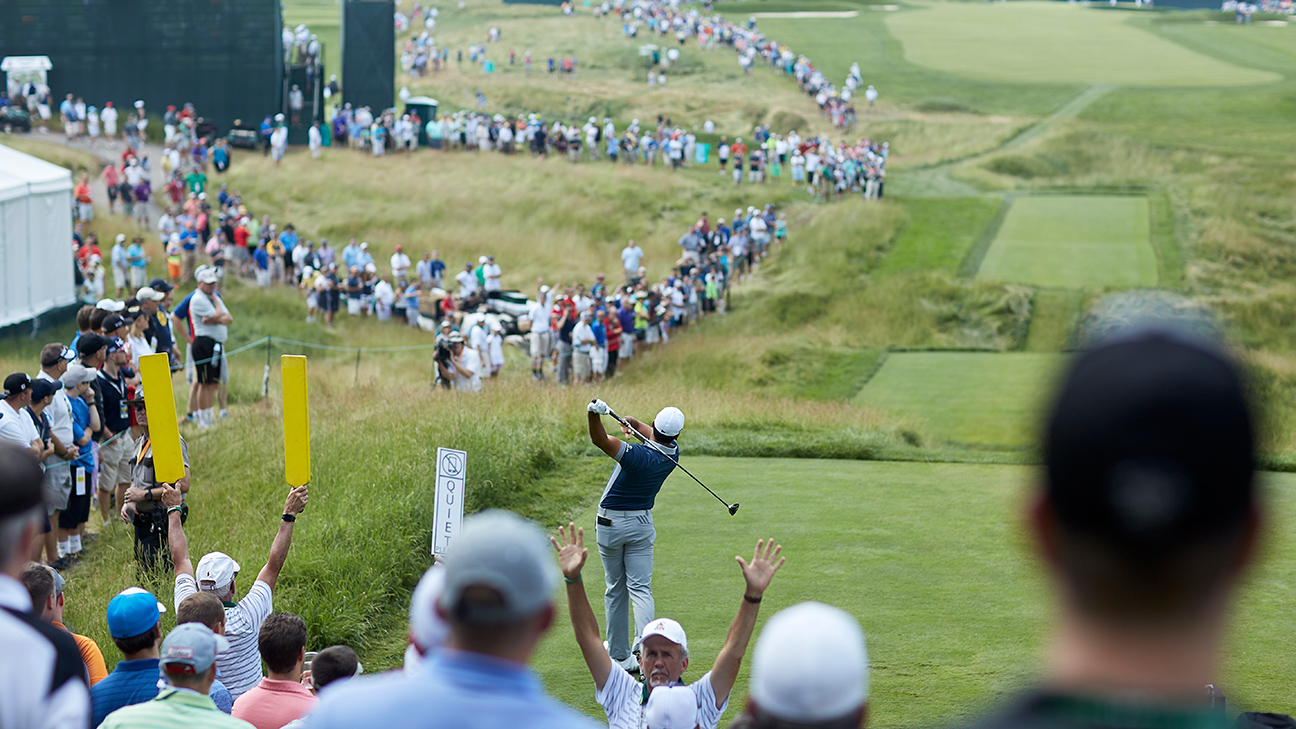 Jason Day fires a drive off the tee at the seventh, but all does not end well as he finishes the hole with a double-bogey. 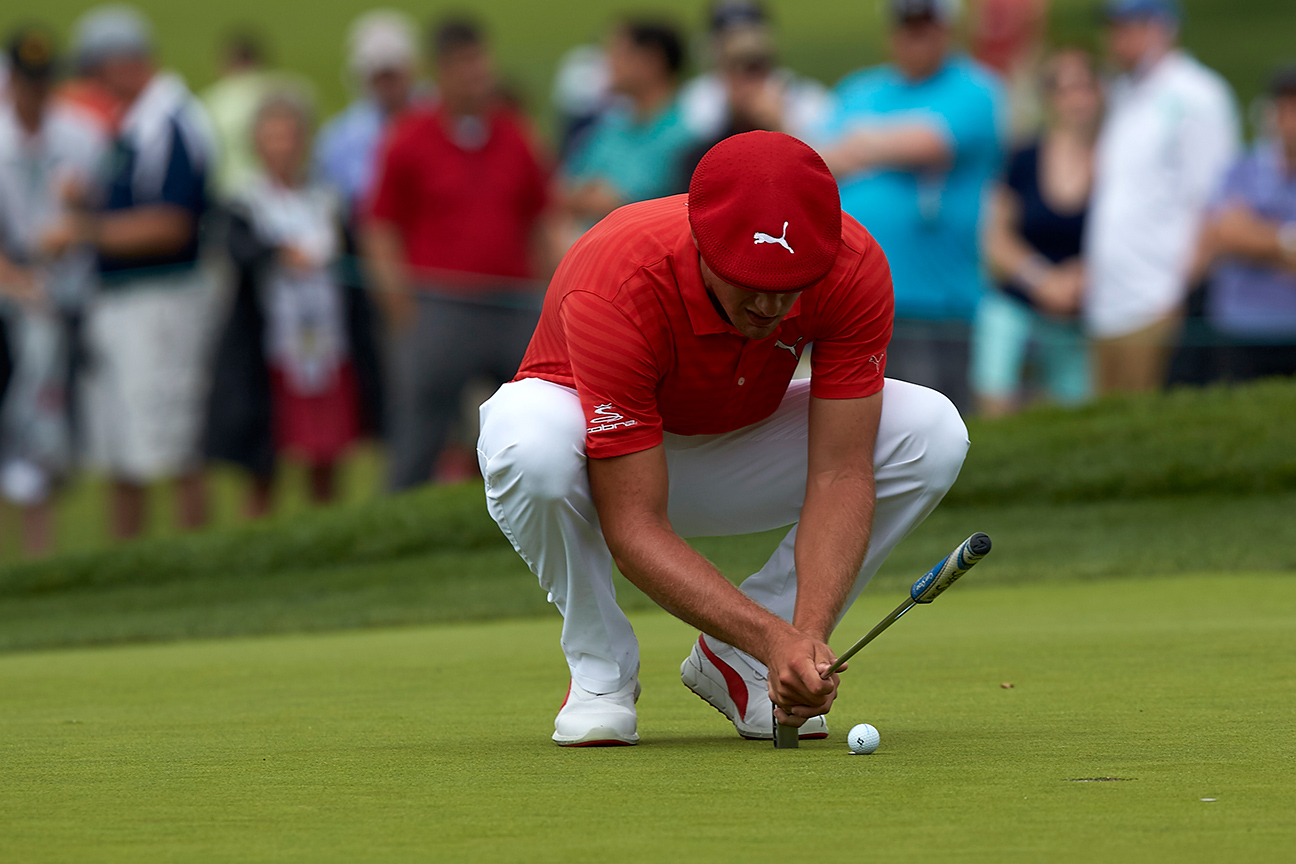 Bryson DeChambeau attempts to line up his putt on 18th green during the first round. 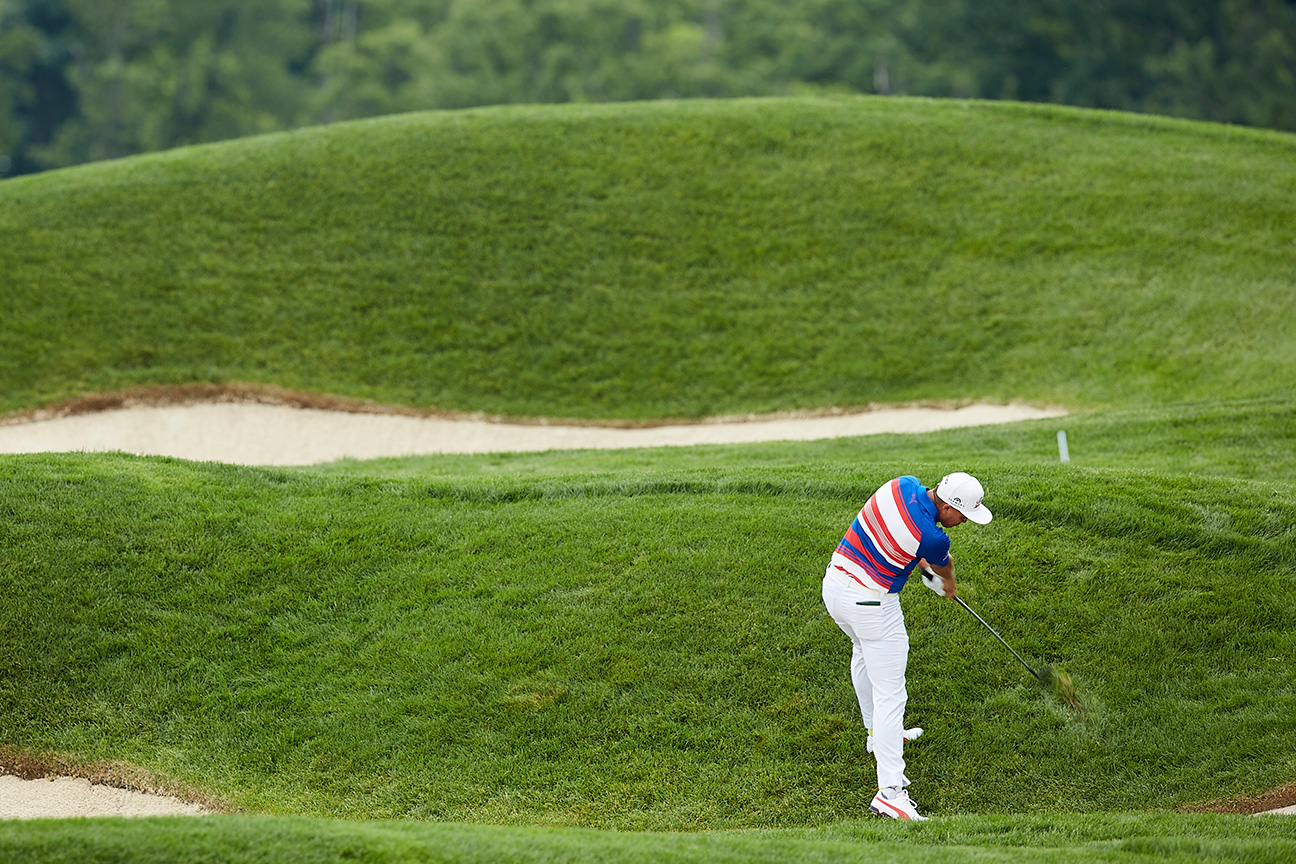 Thick grass plus an embankment add up to a tough shot for Rickie Fowler on the third hole. 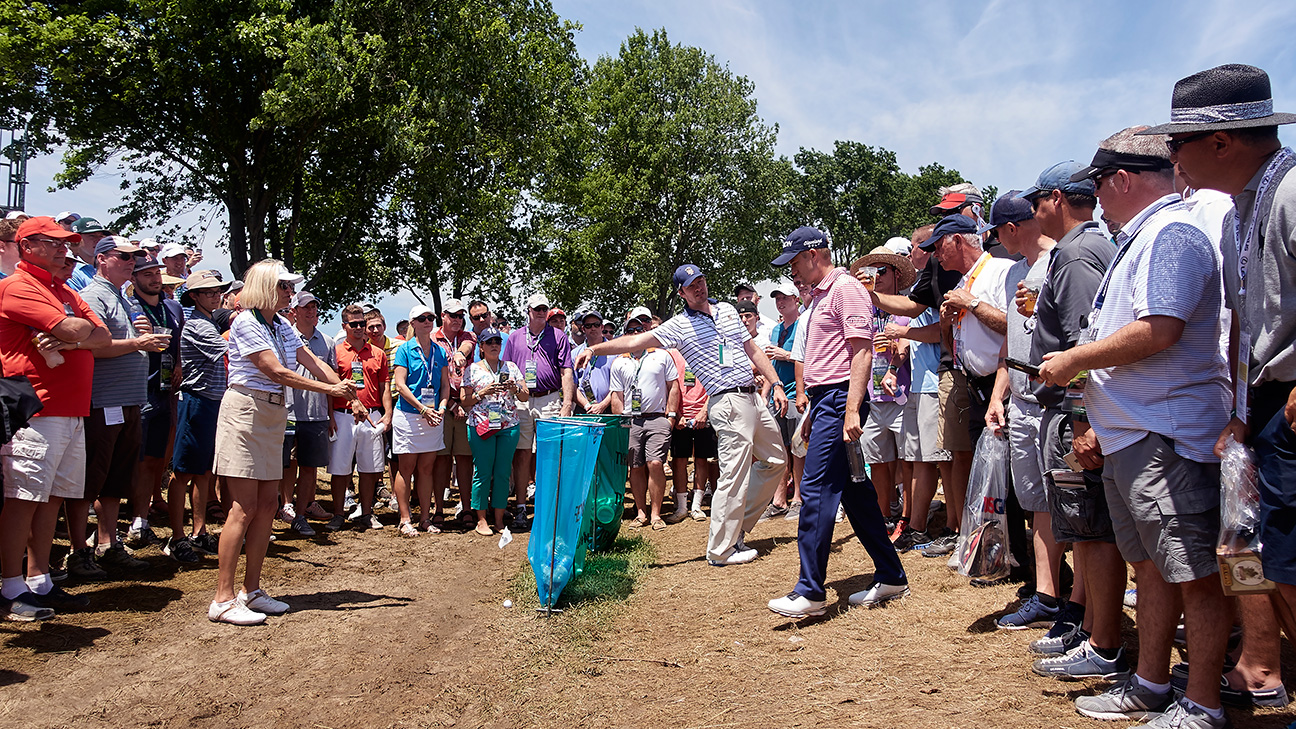 Russell Knox checks out the placement of his tee shot on the 18th hole. It was not favorable. 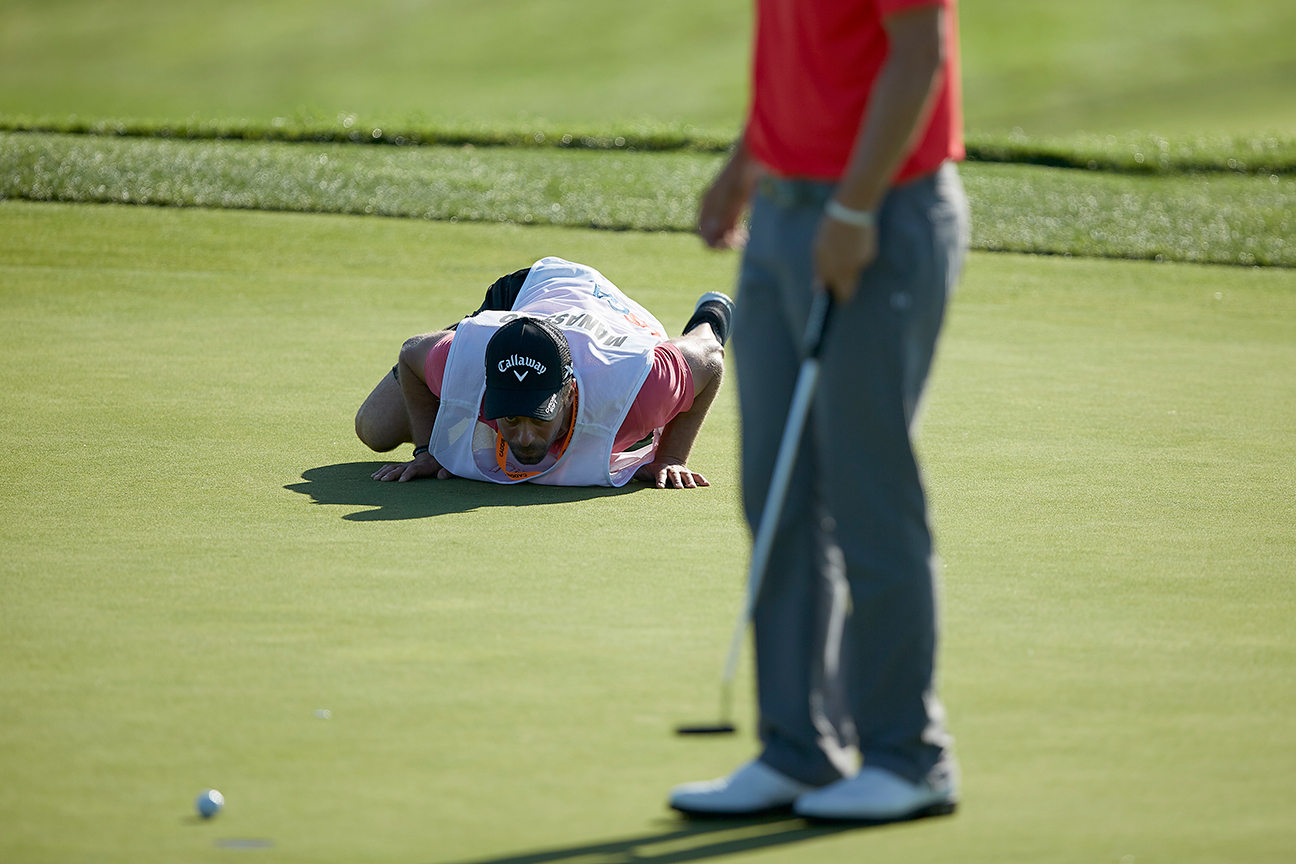 Matteo Manassero's caddie takes a ground-level view of the hole on the 11th green. 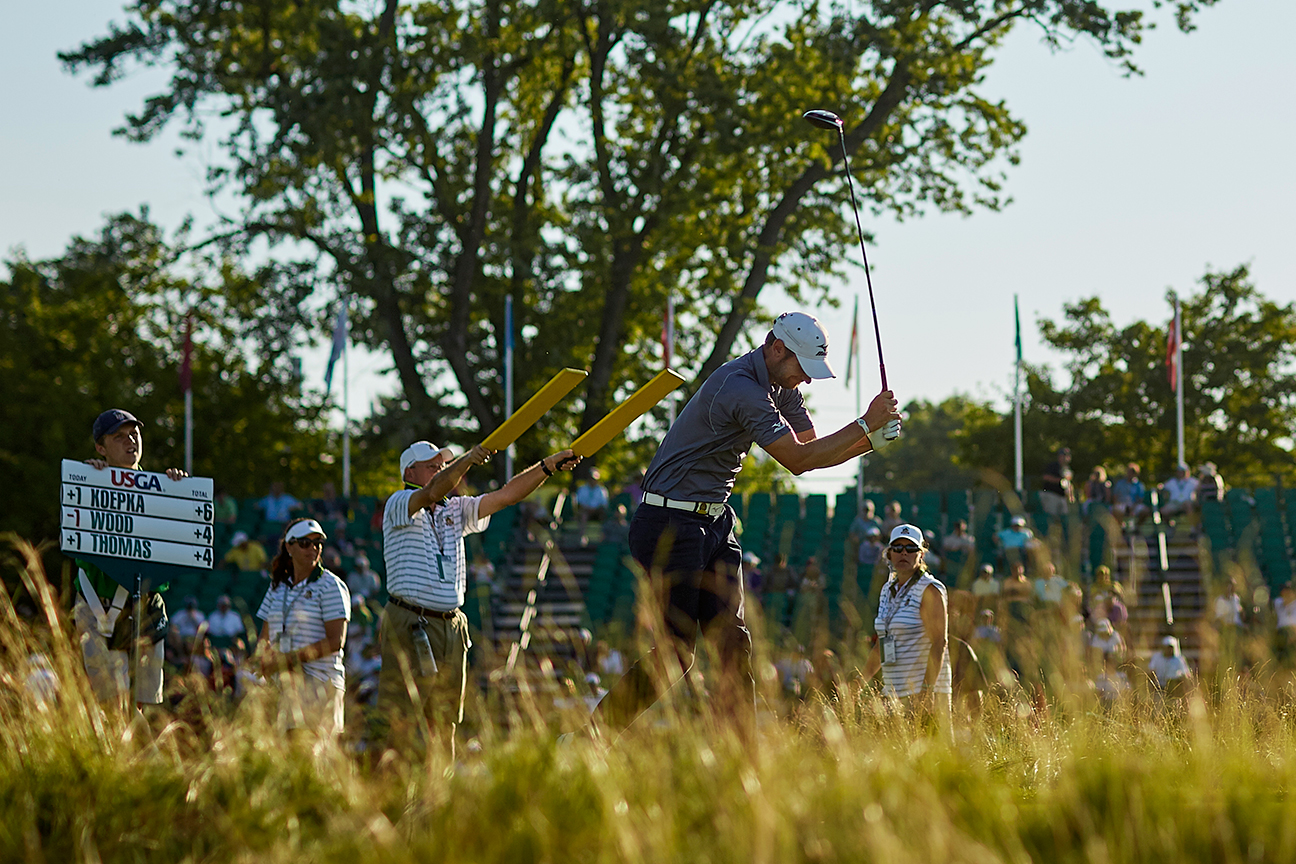 Chris Wood shows his frustration at the 12th tee box after pushing his drive to the right. 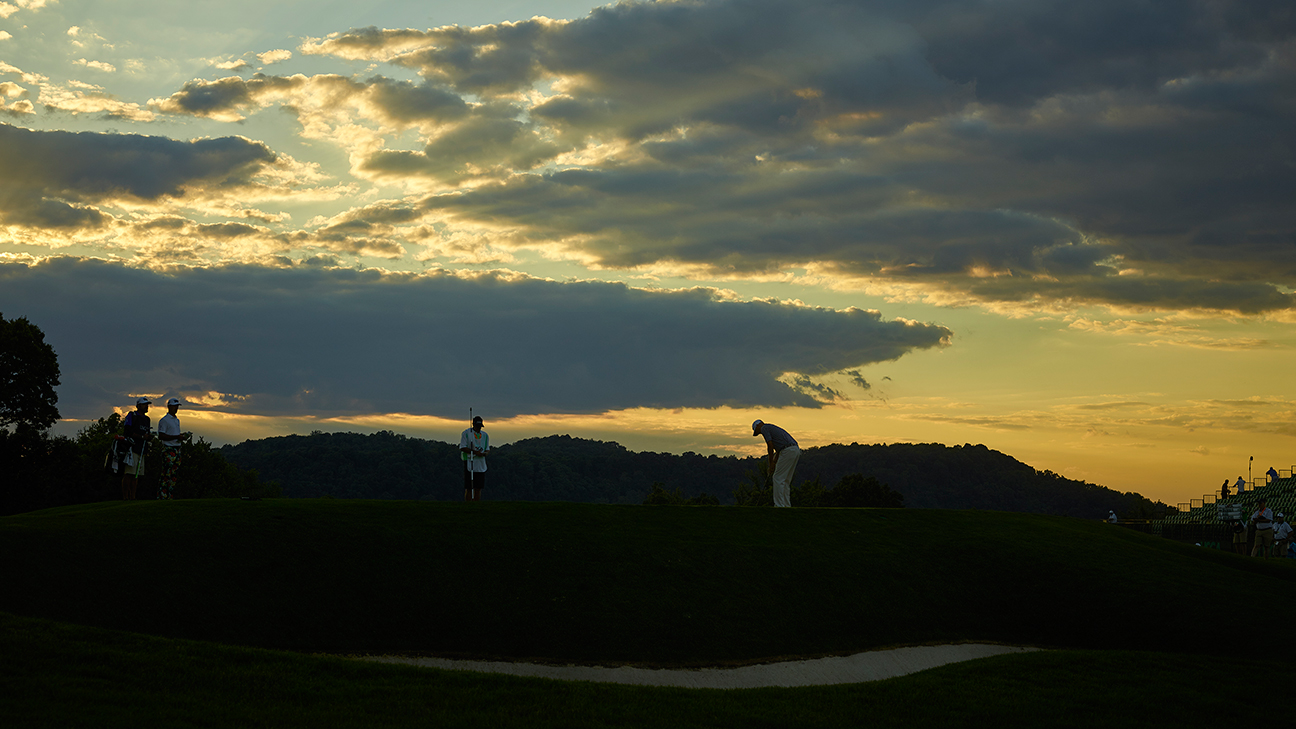 As if the course wasn't challenging enough, the golfers had to fight the fading sunlight to make up for lost time after rain delays during the first round backed up play. 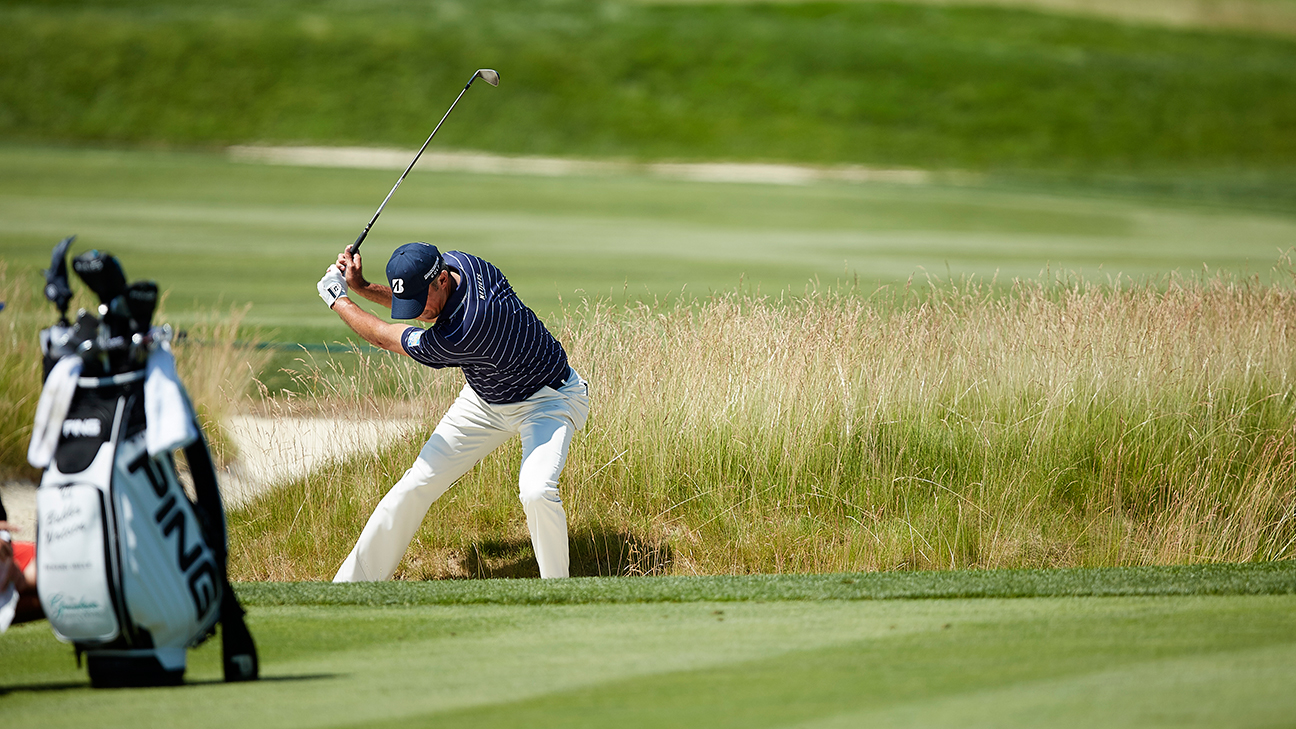 Matt Kuchar adjusts his swing to make a difficult shot out of the Church Pew bunker on the third hole. 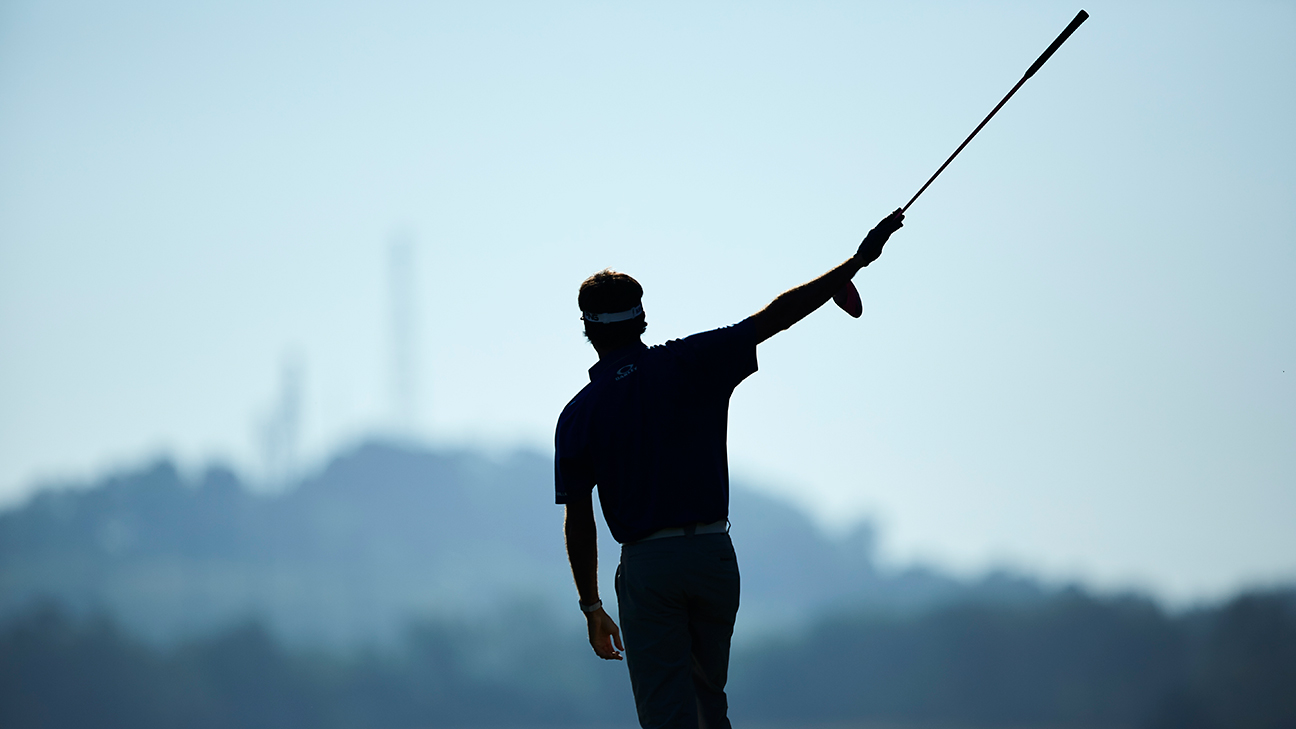 Bubba Watson warns everyone that his shot is heading right on the 10th during play Saturday. At the end of the day, he was 7-over and tied for 46th. 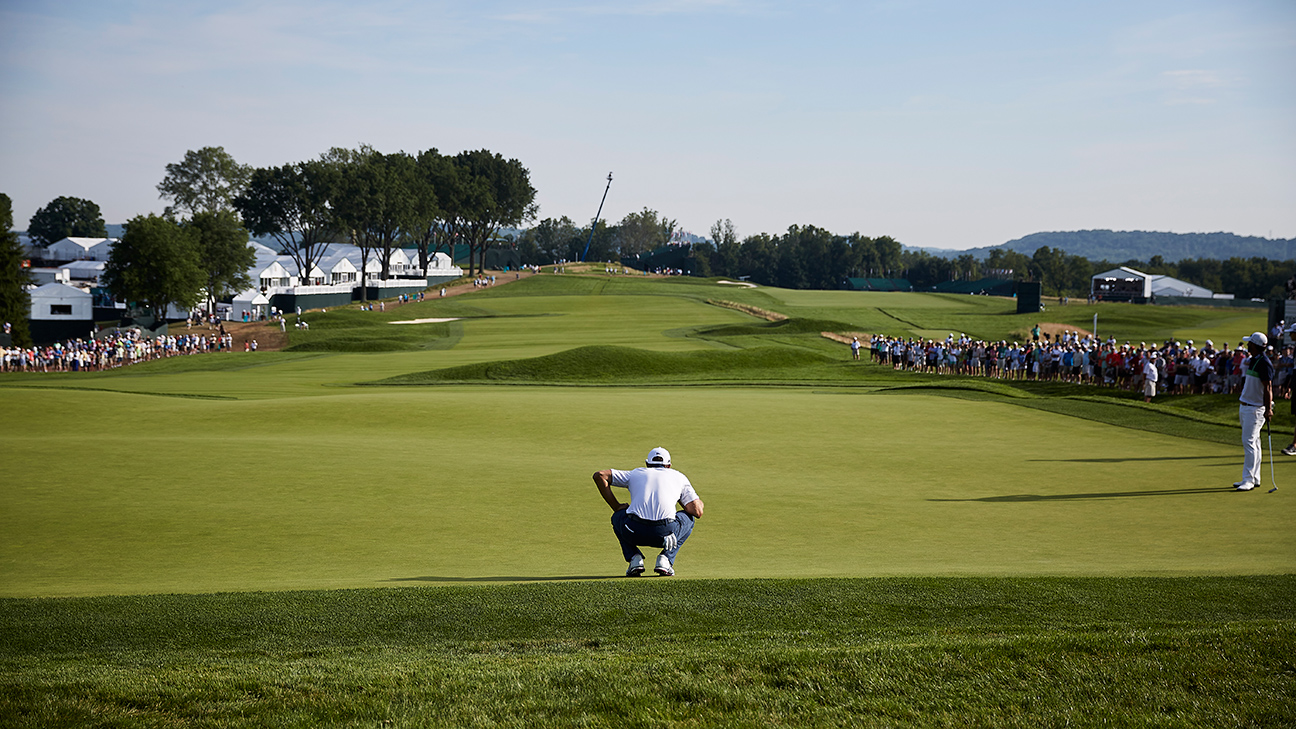 Dustin Johnson crouches to get a good read on the 18th green during the third round. 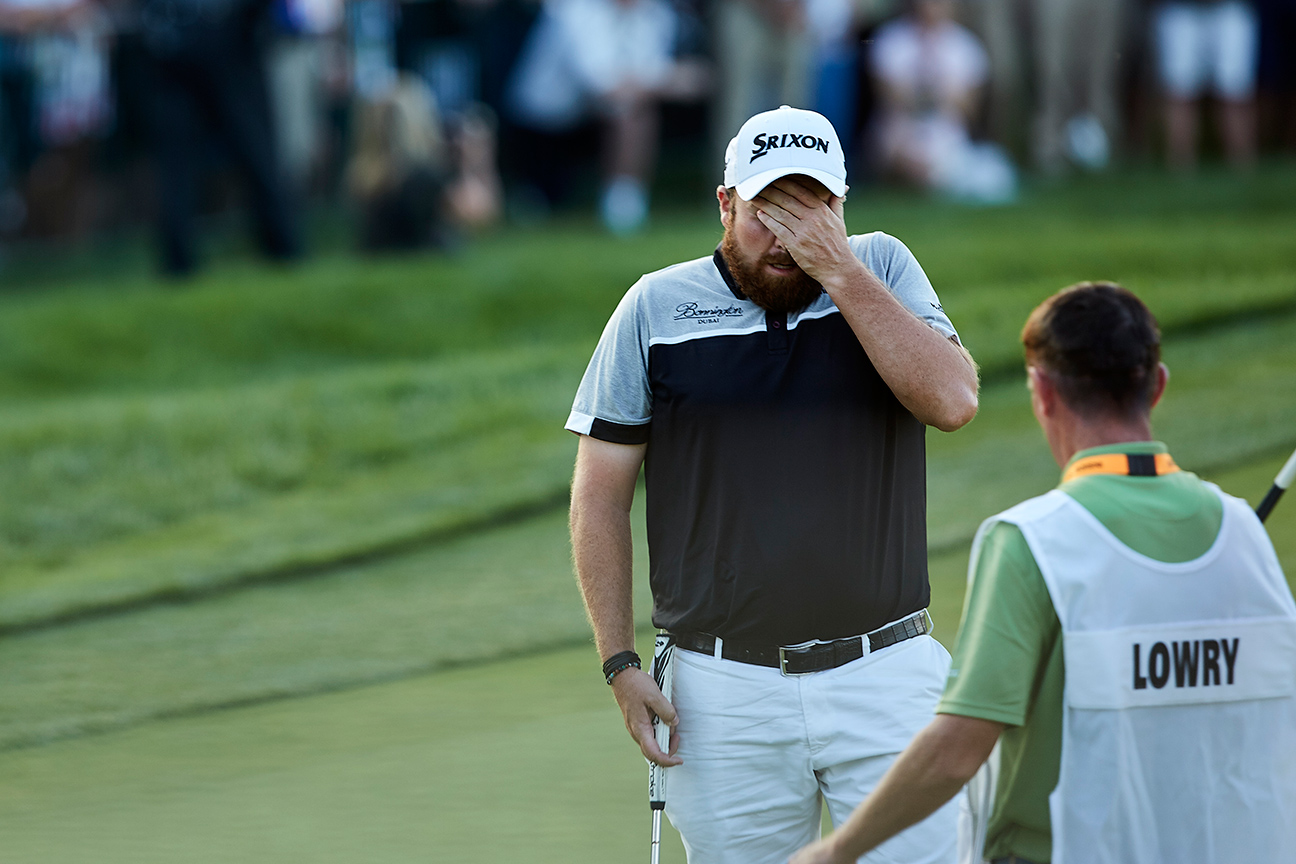 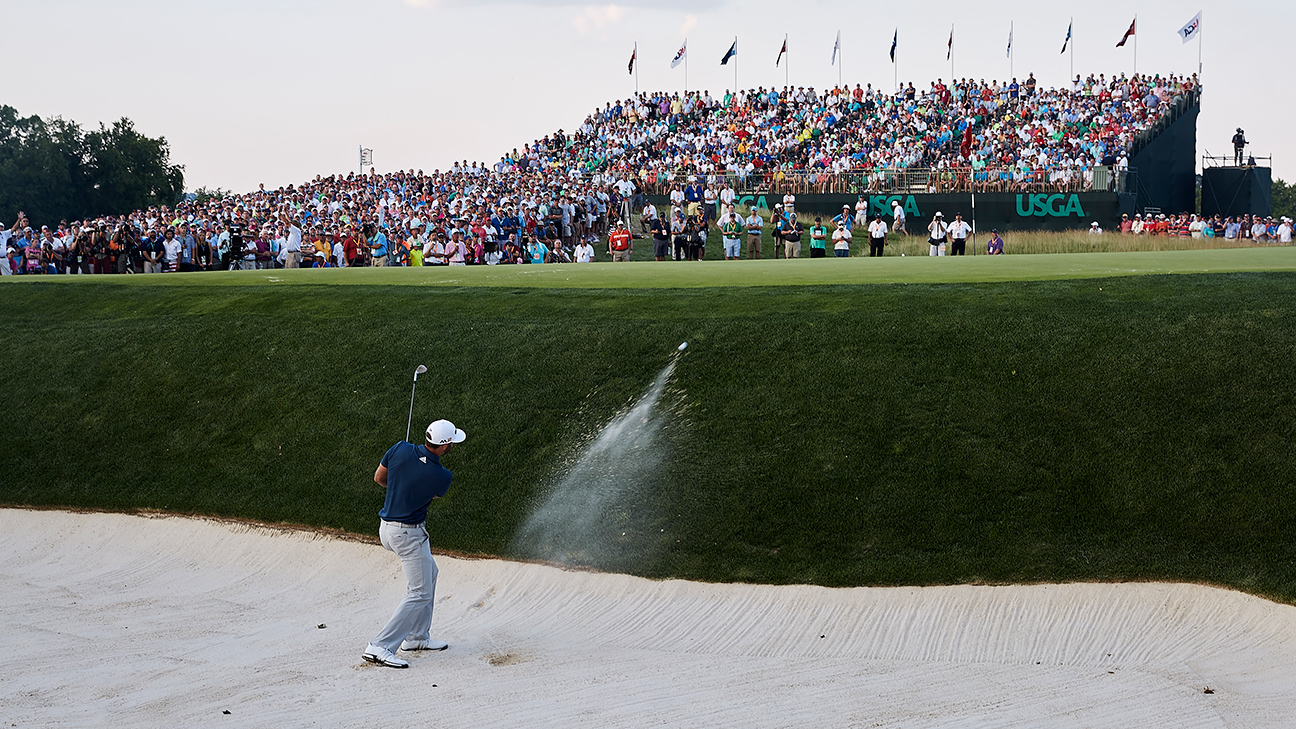 Dustin Johnson manages to save par with a great shot out of the bunker on 17. 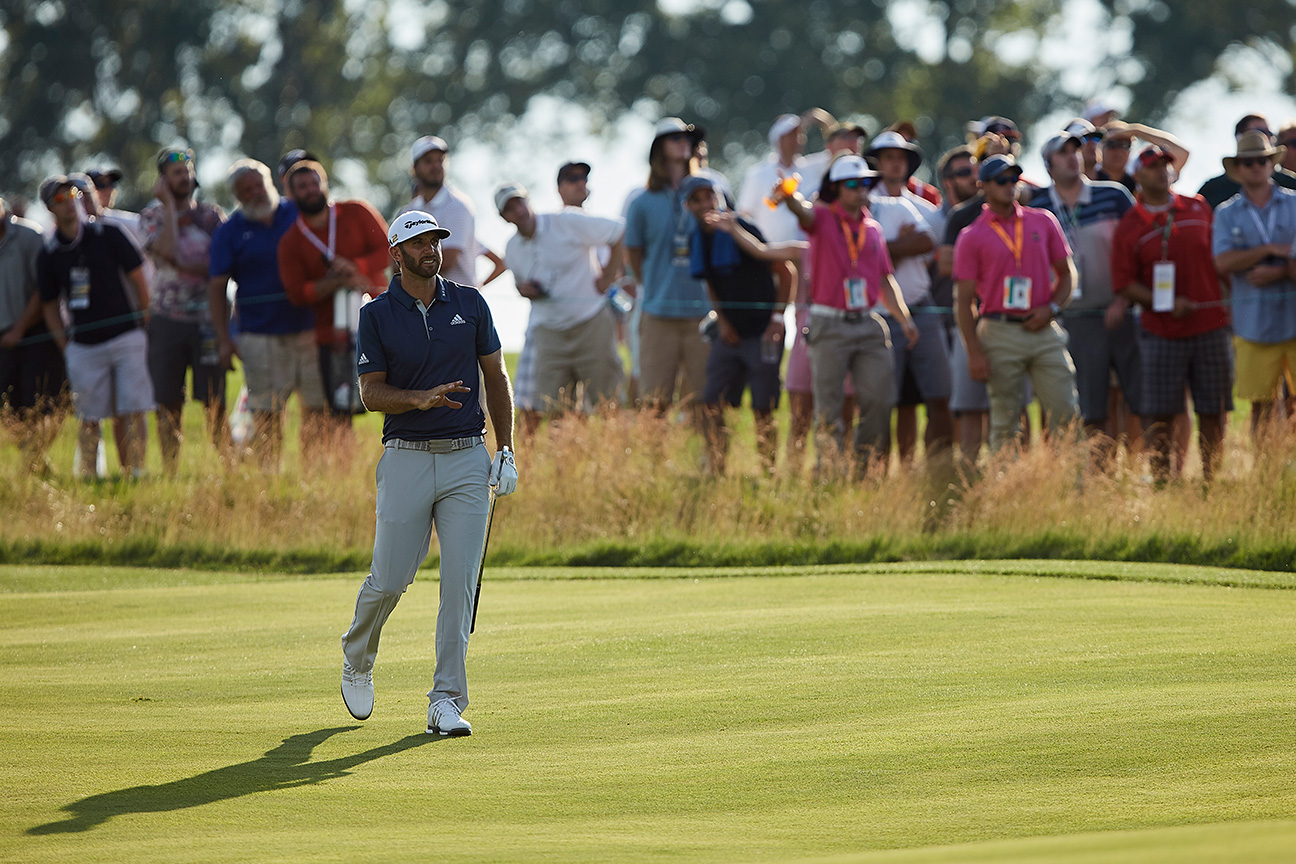 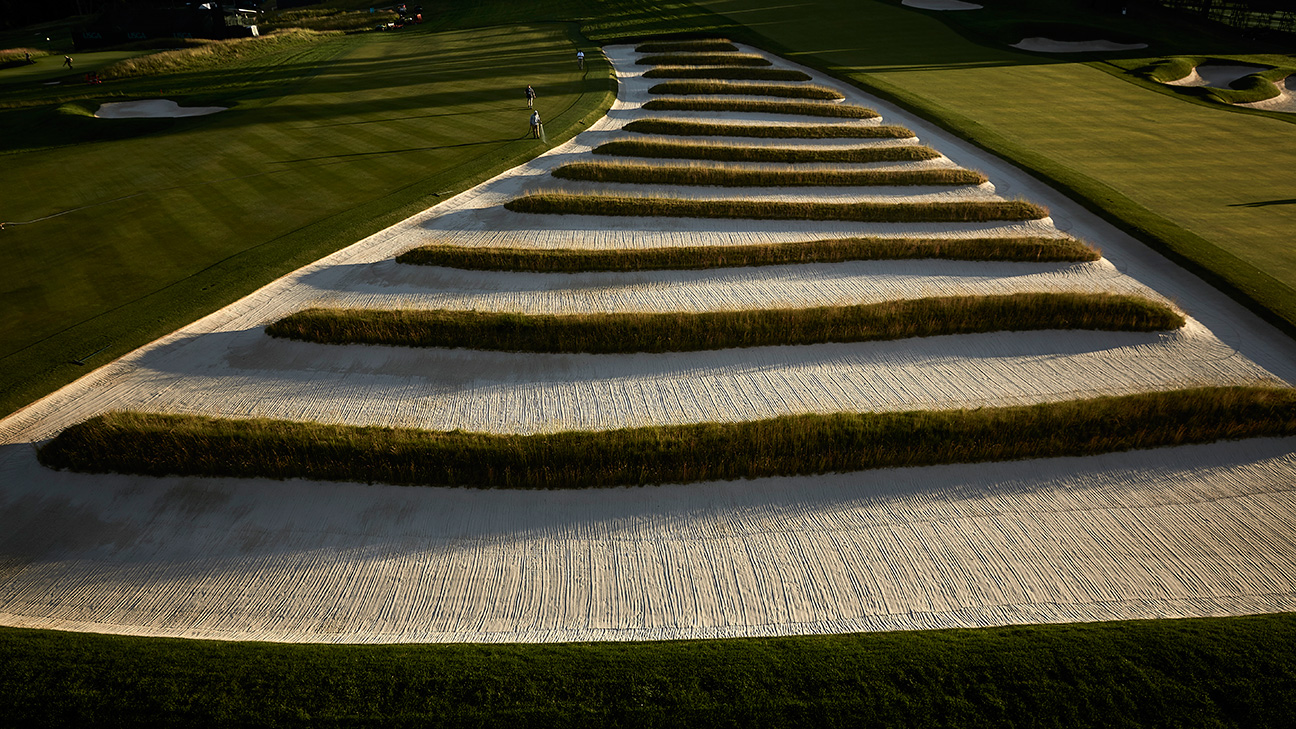 The infamous Church Pews bunker will have to wait until 2025 to torment golfers during a U.S. Open Championship -- the 125th anniversary of the tournament.