ou can usually hear a drone race before you can actually see it. Stepping onto Governors Island on the first weekend of August, after a 10-minute ferry ride from Manhattan, you could hear the buzzing of hundreds of drones as if the island had been overtaken by loud, robotic bugs flying around an obstacle course.

The U.S. National Drone Racing Championships, which were held on the island and shown on ESPN3 for the first time, was just the next step of a nascent sport on the verge of hitting the mainstream. Over the past two years, what was a popular pastime for hobbyists has led to the formation of a handful of national leagues, hundreds of local leagues and thousands of racers trying to establish themselves.

"When you have two cars racing, you get NASCAR," said Dr. Scot Refsland, the co-founder and chairman of the Drone Sports Association (DSA). "And as soon as you have two drones that go really fast, you got yourself a drone race. It's the fastest-growing sport."

The 150 pilots who raced at the U.S. National Drone Championships this past weekend in New York qualified from a pool of over 1,400 from around the country, which speaks to the growth of the sport. In October, the first World Drone Championships will be held in Hawaii, and by next year pilots will be in a position to become professionals and possibly make enough money to become full-time pro drone racers.

"We're all amateurs at the moment," Refsland said. "We're not in an environment where we can support a pro racing system right now, so there are no professionals. But by January each one of our races will be professional races. This is the beginning stages of the sport."

Several companies -- such as AIG, Ernst & Young, Vizio, Ecko and GoPro, which sponsored the race -- have taken notice of the emerging sport. For many executives who are on the fence about investing in the sport, the deciding factor, according to Refsland, is trying on the first-person-view (FPV) goggles. The special goggles make pilots and fans feel as if they are sitting in the cockpit of the drones as they zoom around. 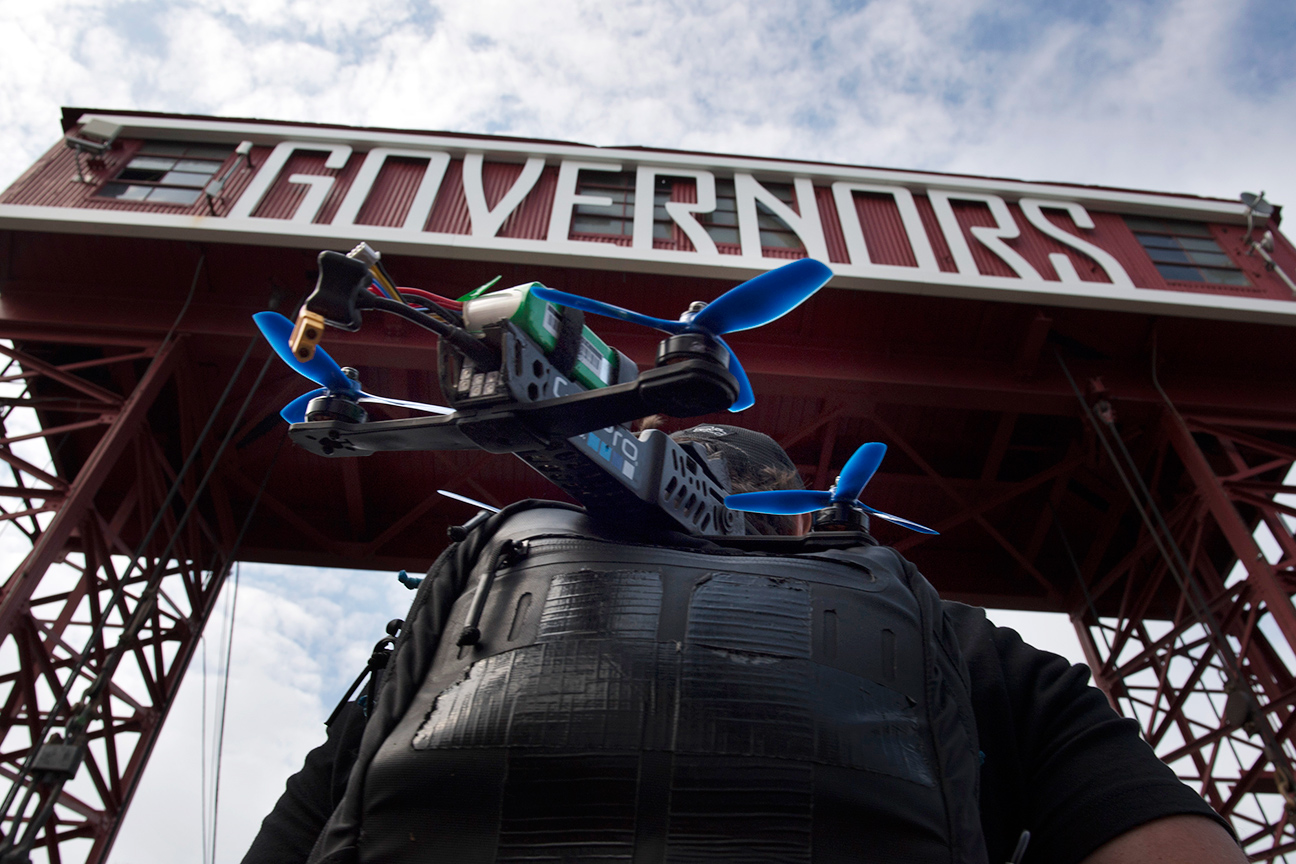 Competition started Saturday at the National Drone Racing Championships on Governors Island in New York City for the individual, freestyle and wing competitions. 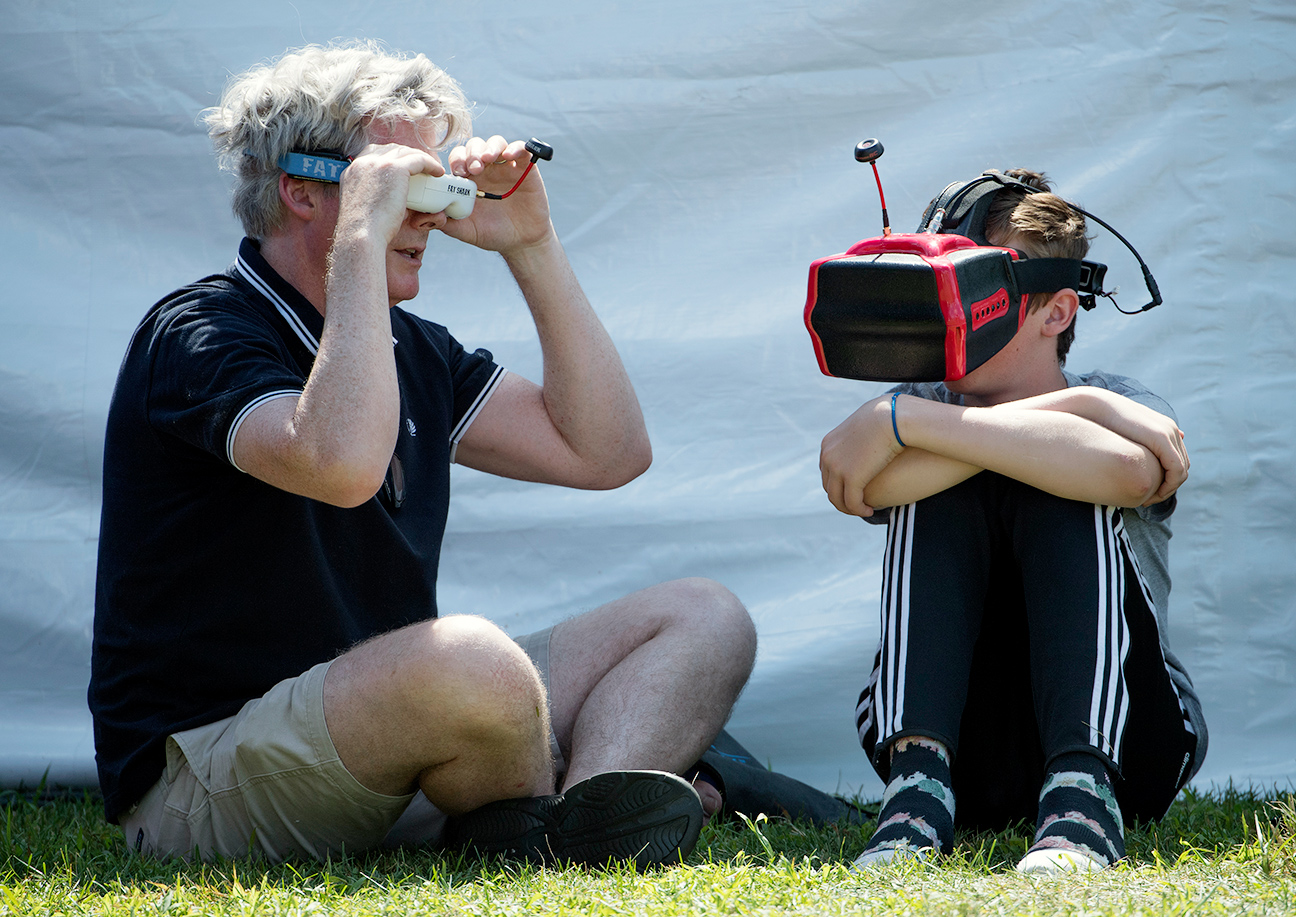 James Cawley, and his son Liam, 13, of New York, watch the races from the sidelines using goggles that allow them to see the race from the pilot's perspective. Liam is learning to build and fly drones, and James flies the larger types of radio-controlled models. 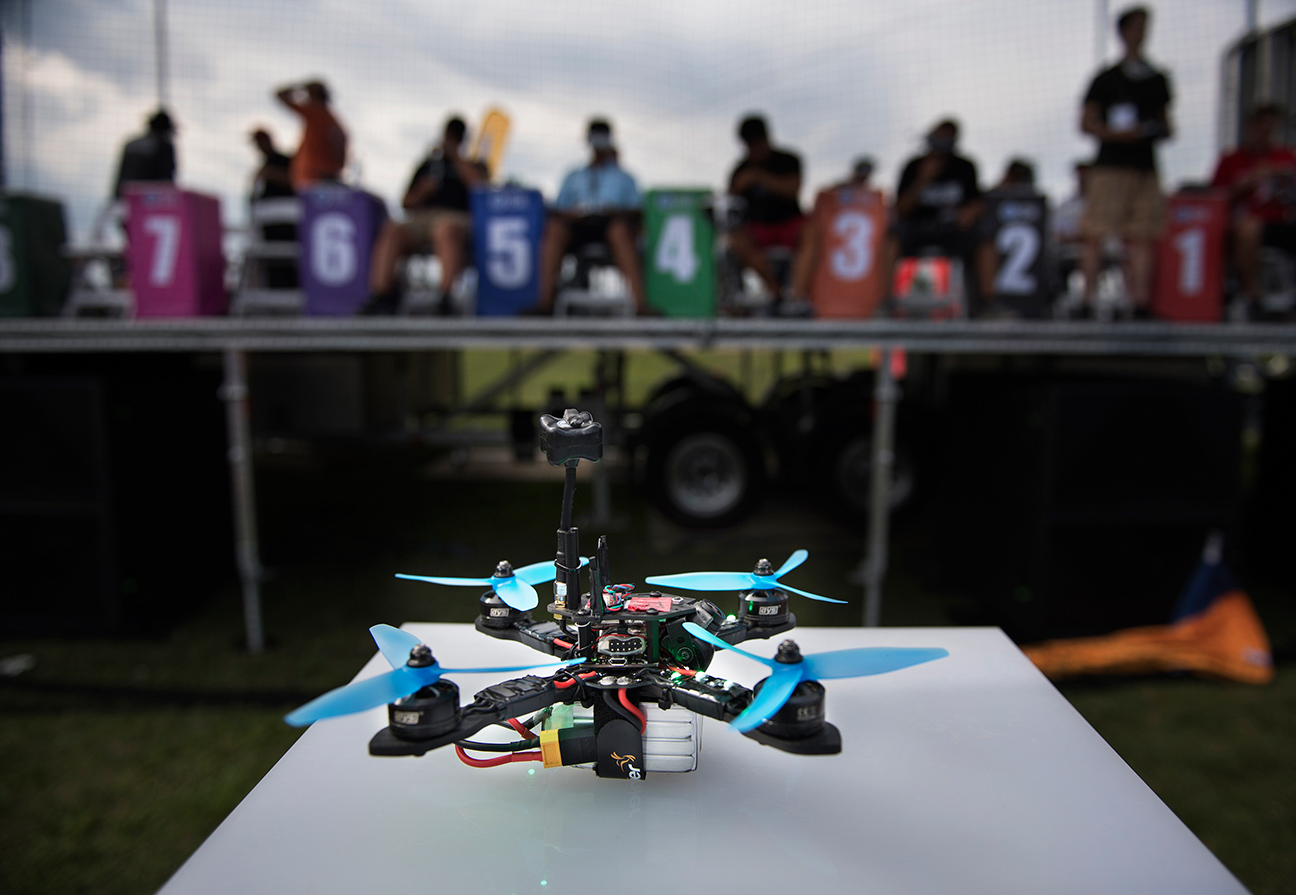 An FPV (first-person-view) drone sits on the liftoff table moments before the start of a practice race. Up to eight pilots participate in each race, seated side-by-side on a stage set up at the finish line, facing the grandstands. 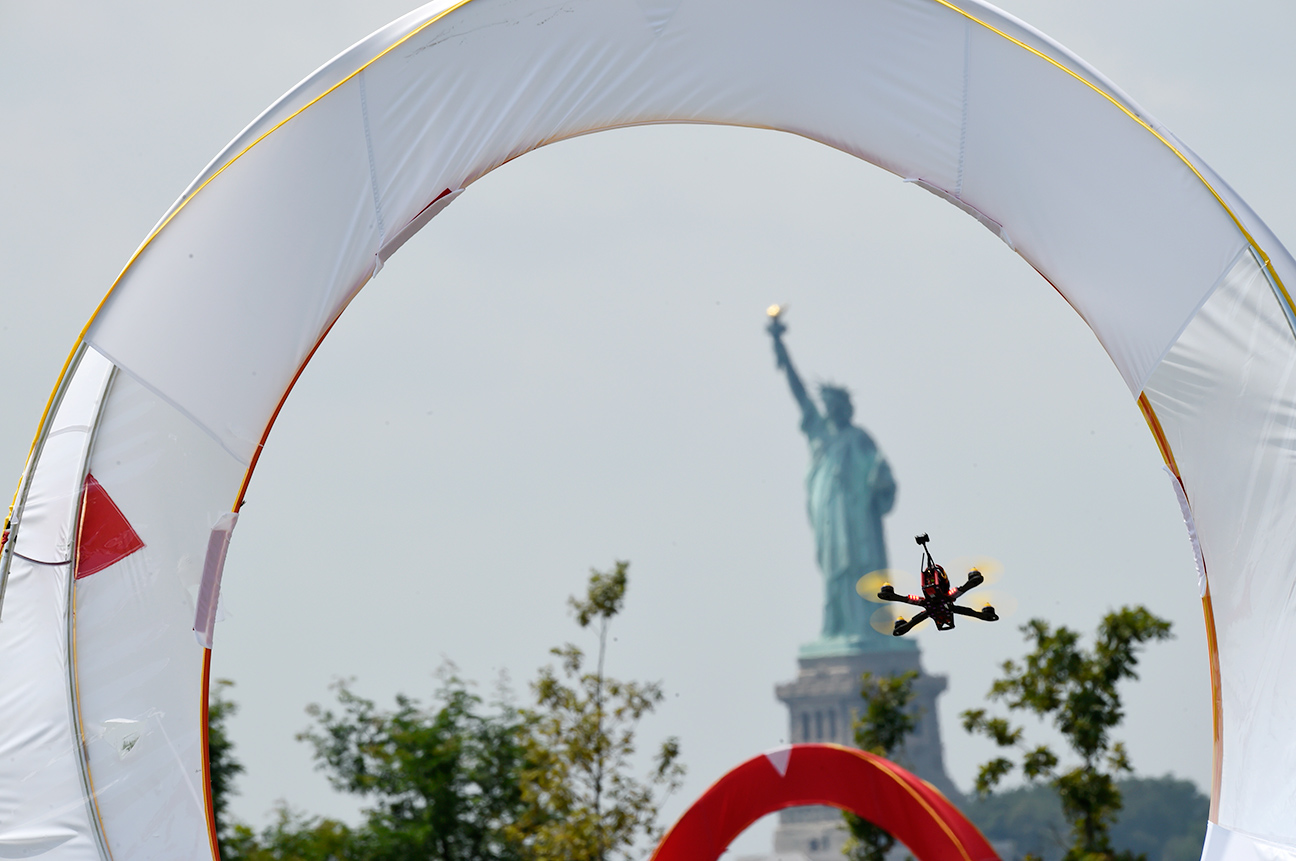 A drone flies through one of the hoops along the course. Quad drones can fly as fast as 80 mph on straightaways, but the courses are designed to keep the pilots to a 60 mph limit, as defined by the Academy of Model Aeronautics. 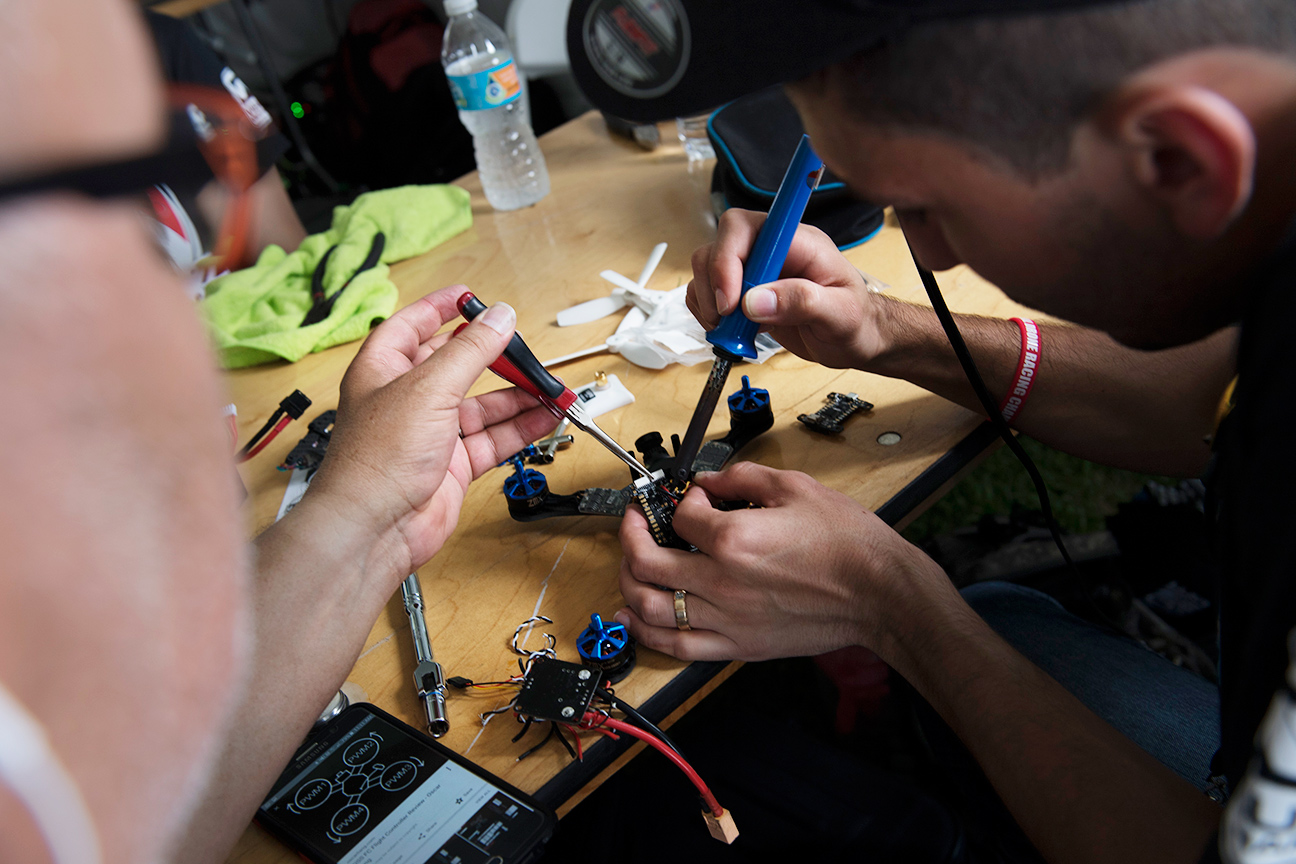 Edgardo Aponte de Jesus, left, and Marcos Junior Otero Badillo, of the Puerto Rico National Drone Association, complete work on their drone before competition starts. Each racer can customize his drone within the weight, size, propeller and battery-power specifications set forth by the World Rotor Sports Association. 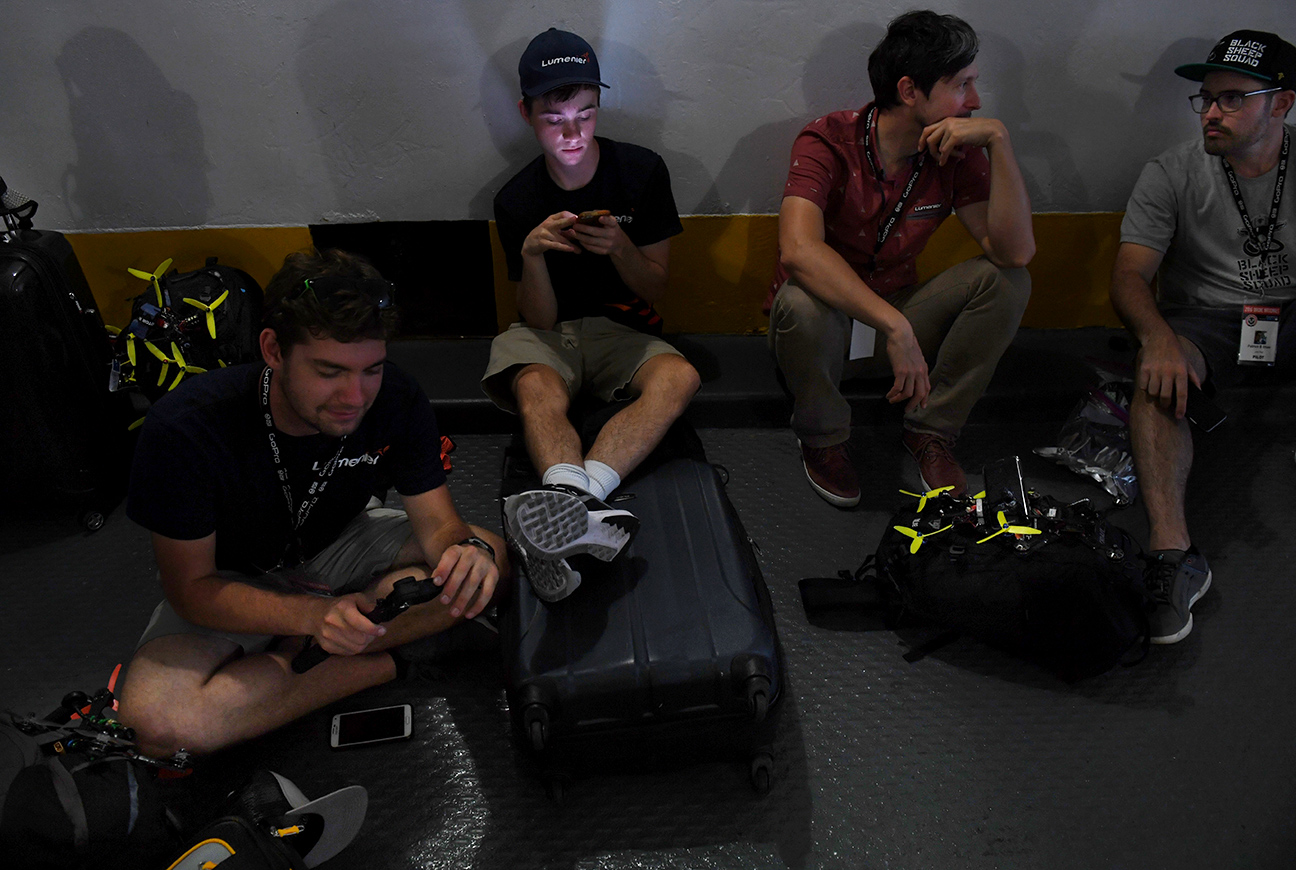 Johnny Shaer, of Chicago, who goes by the nickname JohnnyFPV, uses his phone on the ferry ride back to Manhattan after a long day of pretrials. With him, from left, are Nick Willard of Atlanta, Carlos Puertolas of California and Patrick Shaw. 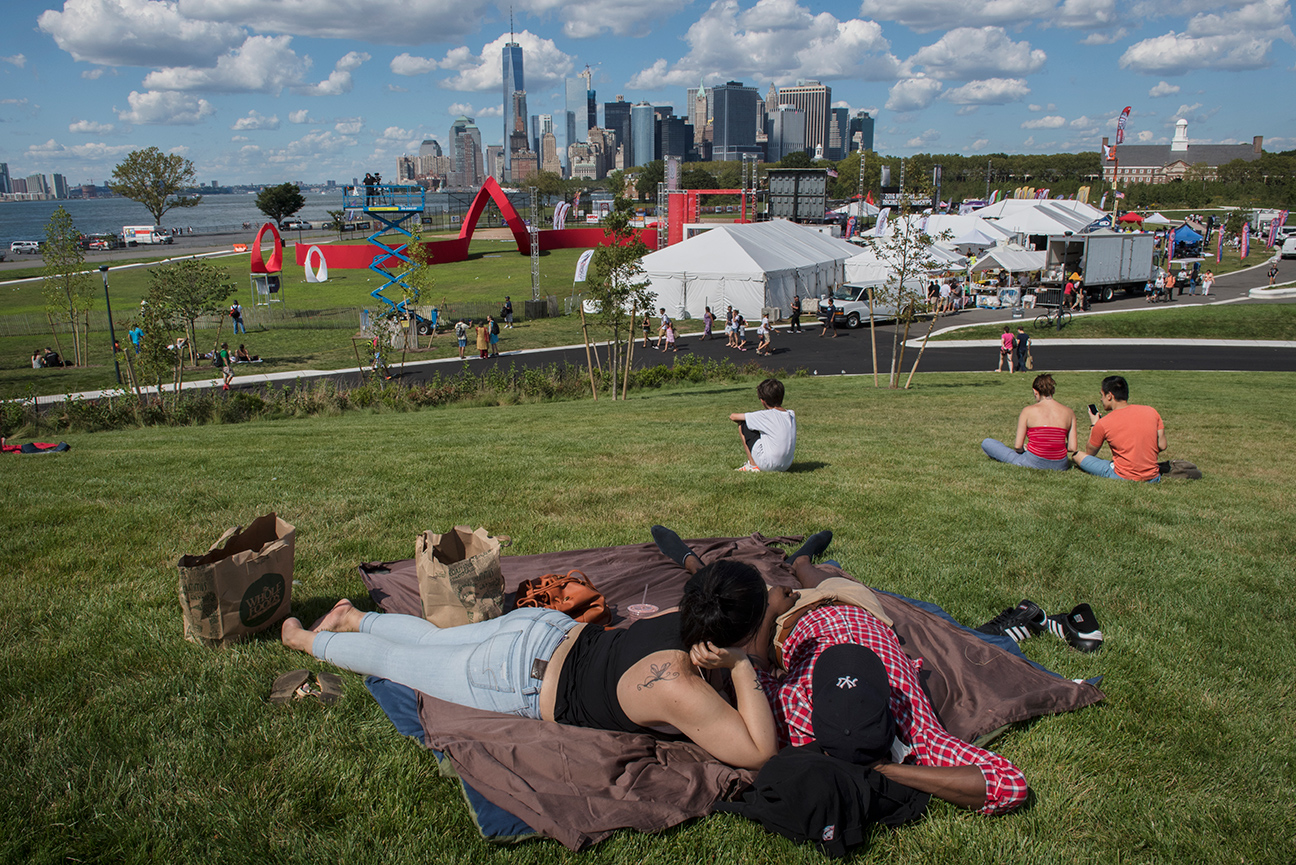 Low hills at the southern end of Governors Island provided a spectacular viewing location of the event. While the quad drones are small, the larger wing drones could be observed flying around the course at a distance. 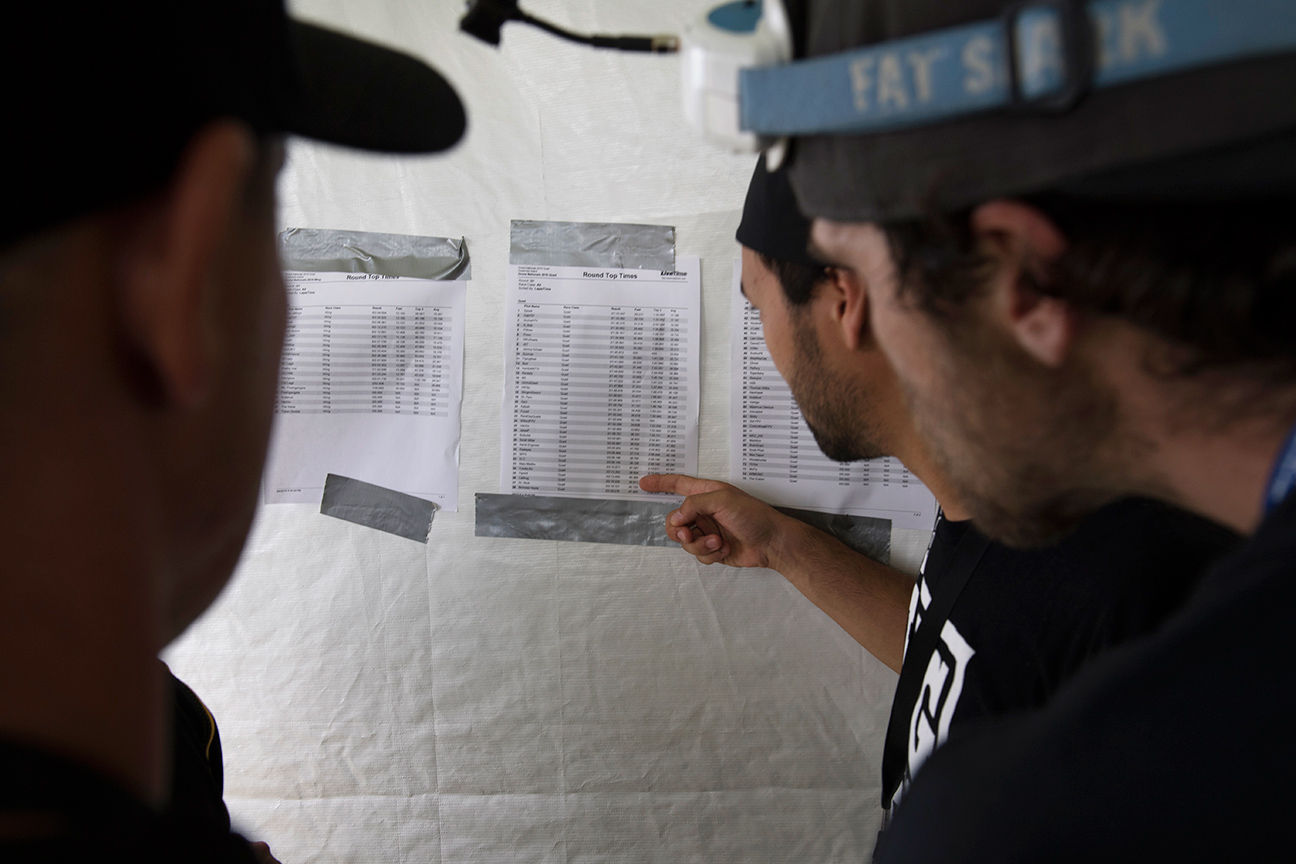 Pilots check out the times board in the pilots tent in between races. Each race was comprised of three laps around the course, with every pilot's single best lap time counting as the result. 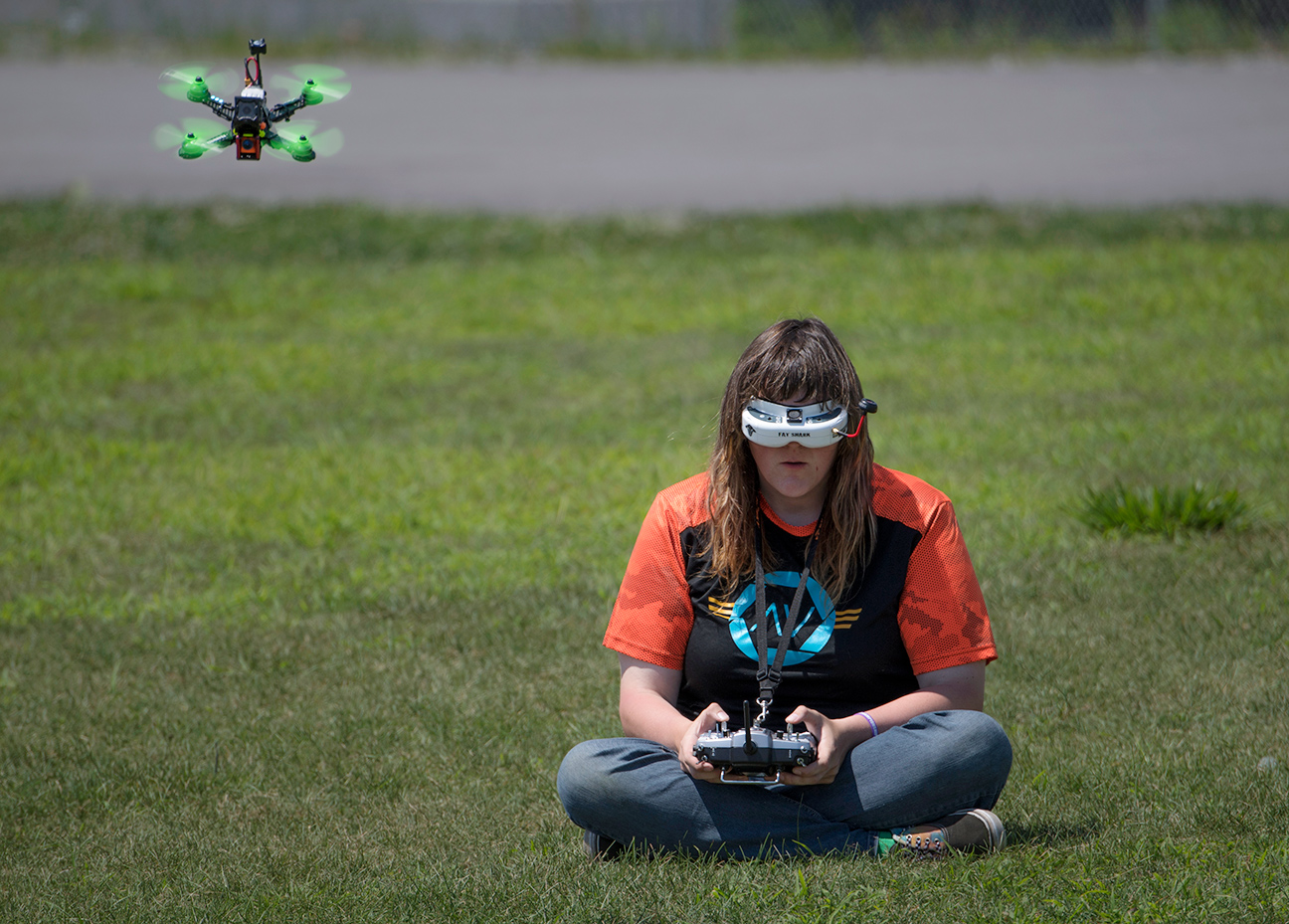 Zoe Stumbaugh, who goes by the nickname ZoeFPV, launches her drone from the course during the finals of the freestyle competition. In freestyle, pilots perform tricks and stunts with their drone while interacting with the environment. 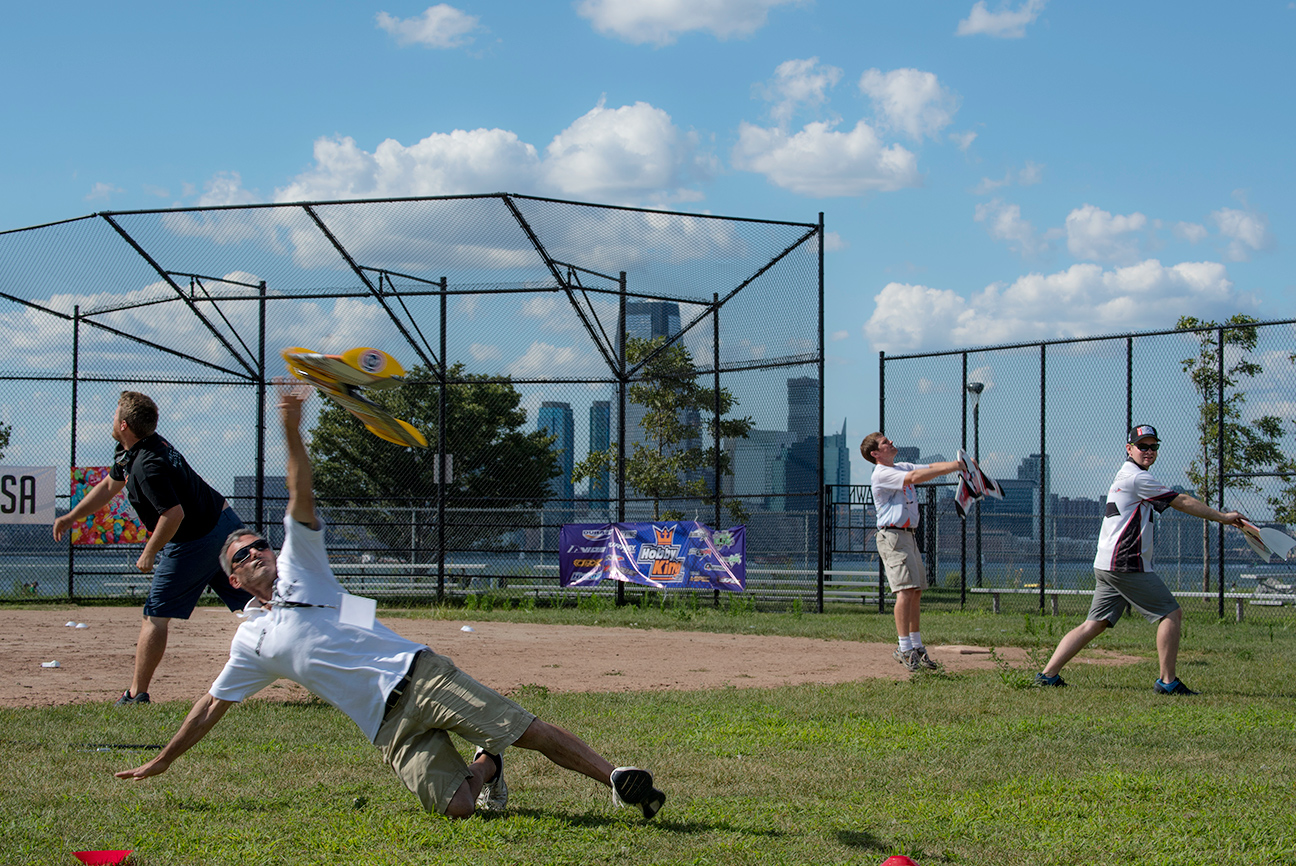 At the start of the wing races, teammates of the pilot help launch the winged drones. These "flying wings" measure from 30 to 40 inches, tip to tip, and can reach speeds of over 100 mph, but like their quad counterparts, the course is designed to keep them flying at 60 mph. 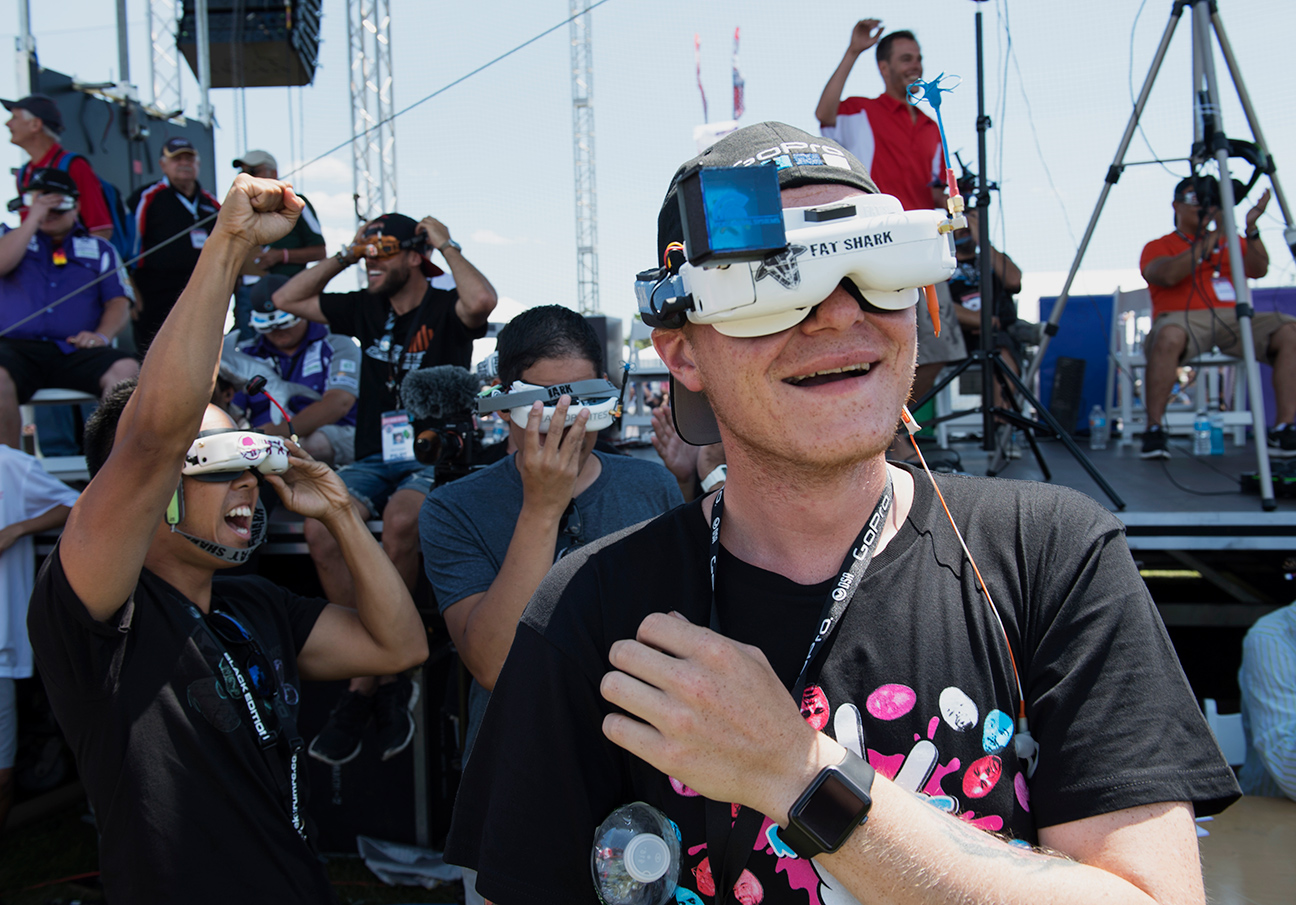 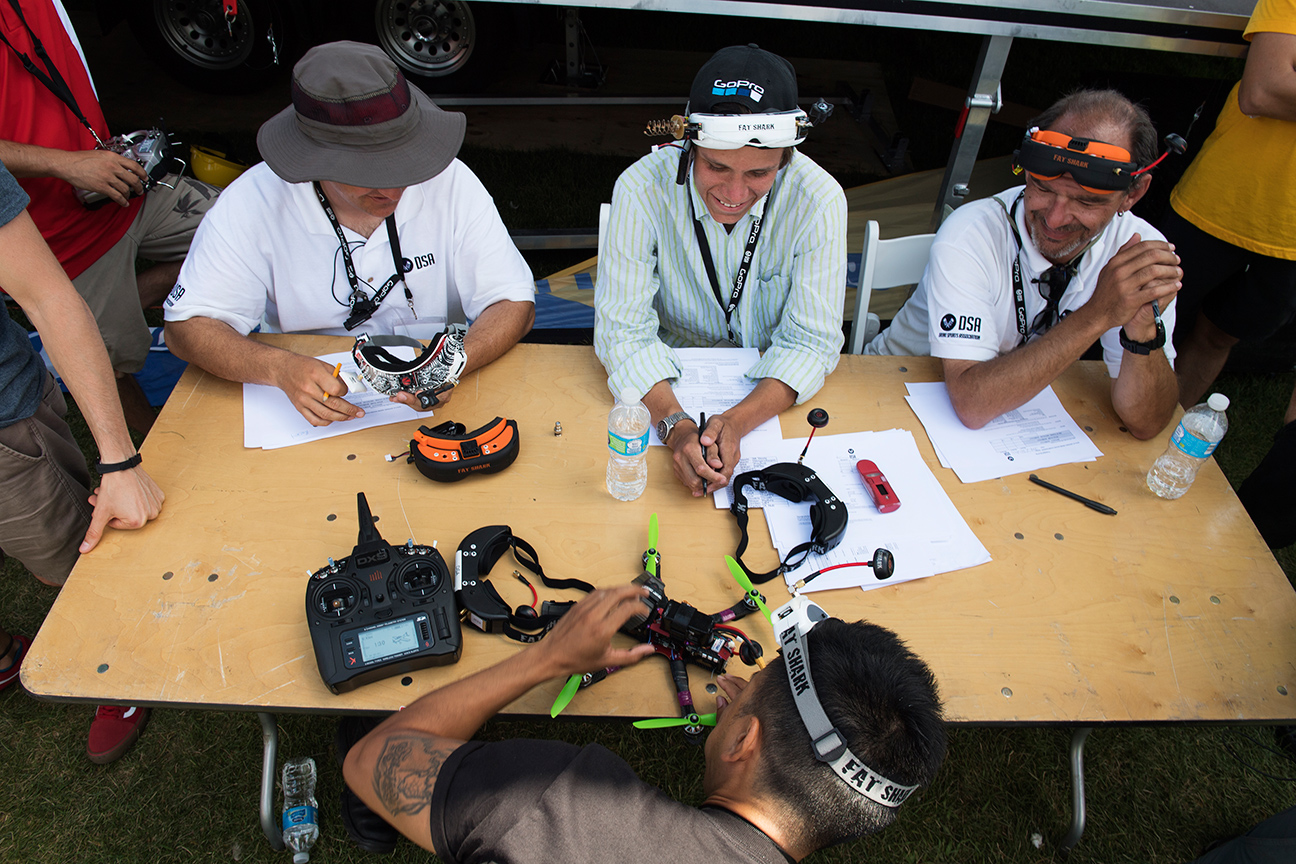 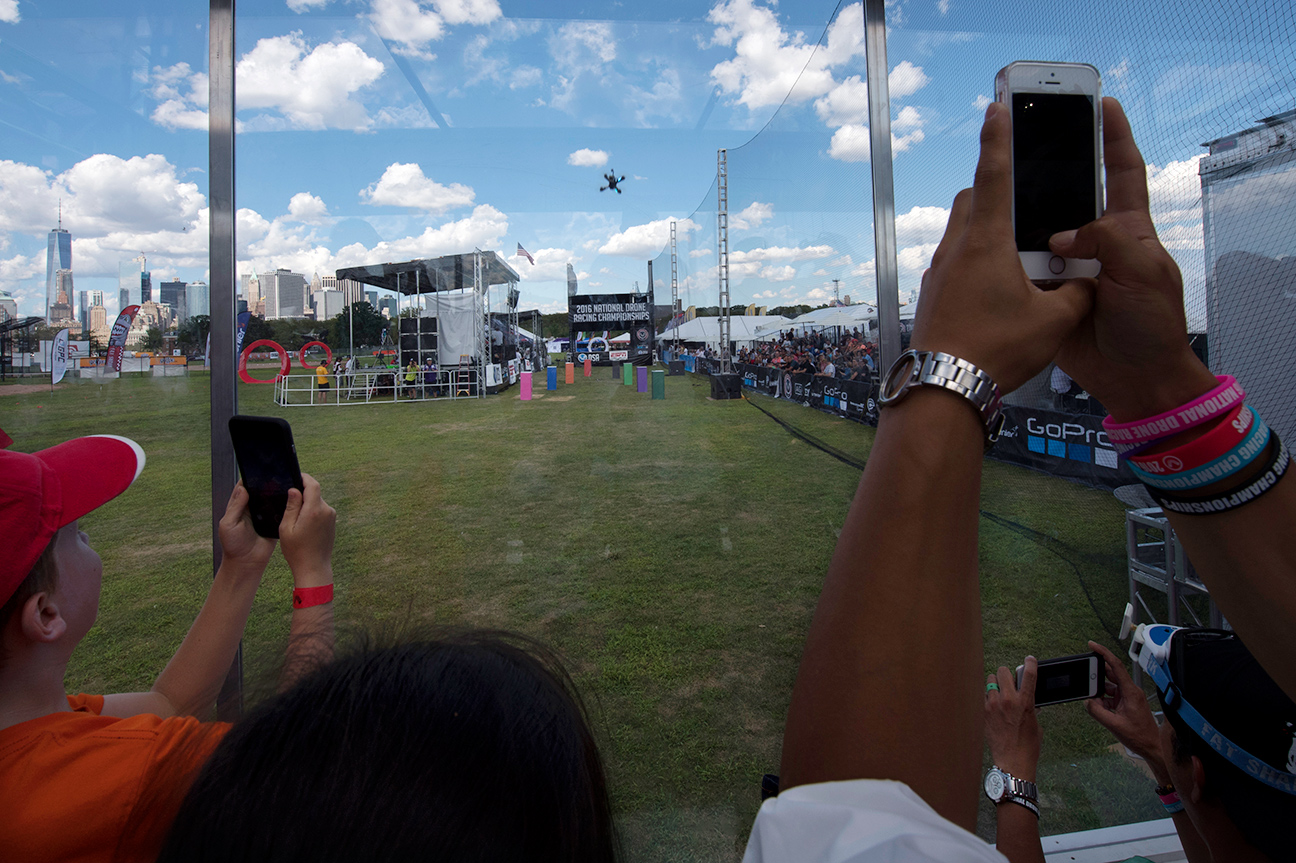 Fans watch from the "fish tank," a large glass-enclosed spectator area inside the course, moments before a drone passed by the glass roof. 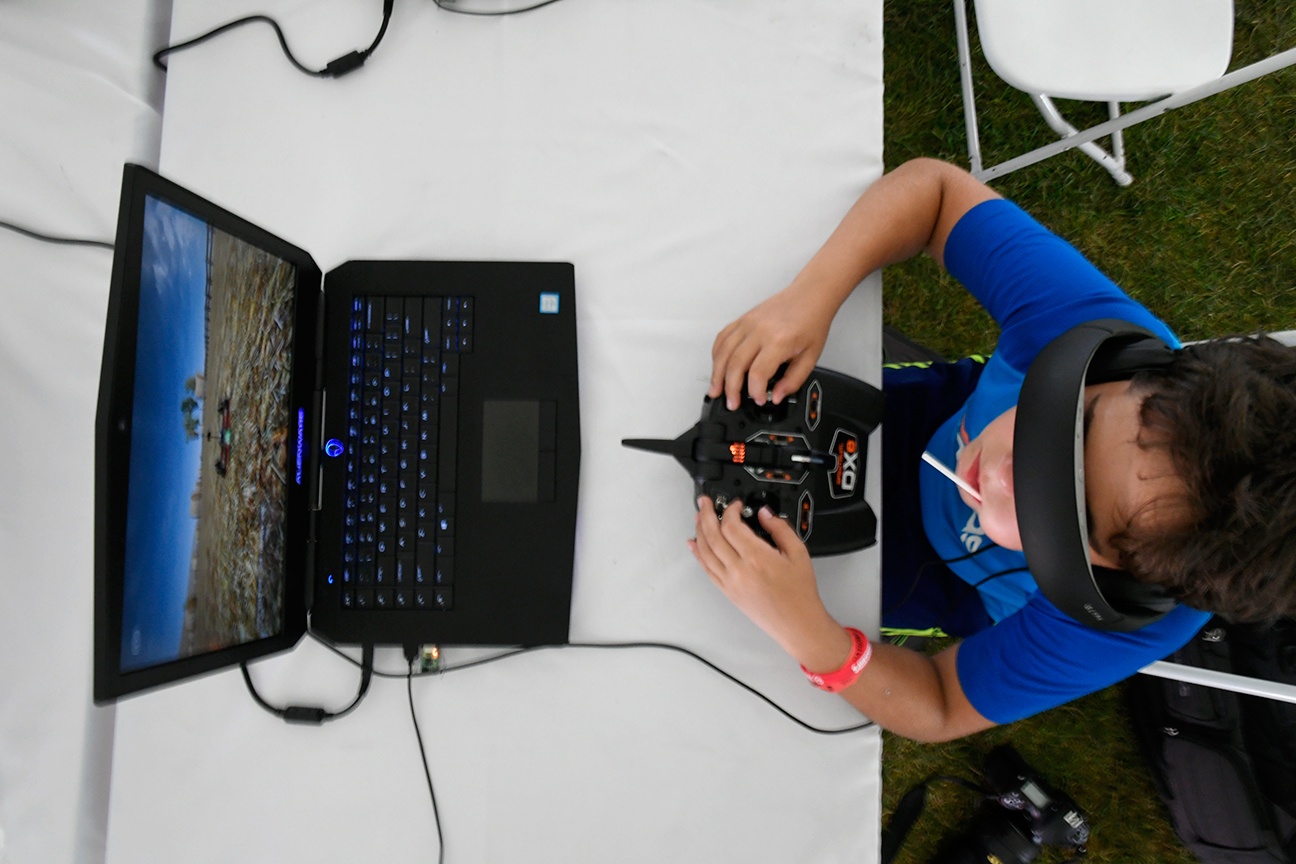 Sam Vega, 11, of Brooklyn, wanted a GoPro before he played a few drone games at the demo virtual reality tent. Now he has told his mother he wants a drone. 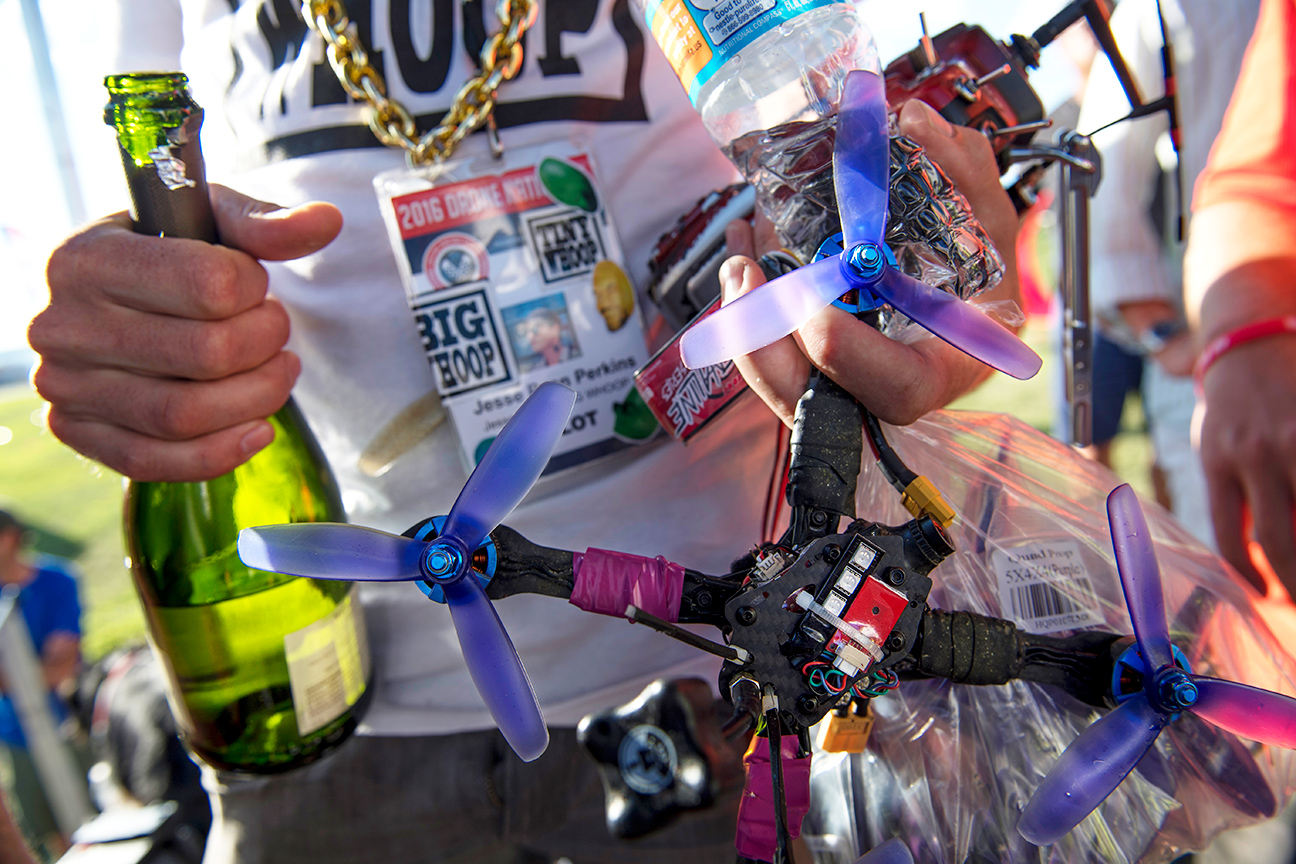 Jesse Ryan Perkins, of team Big Whoop, holds on to his drone and a bottle of champagne used in celebration after his teammate won the national championship. 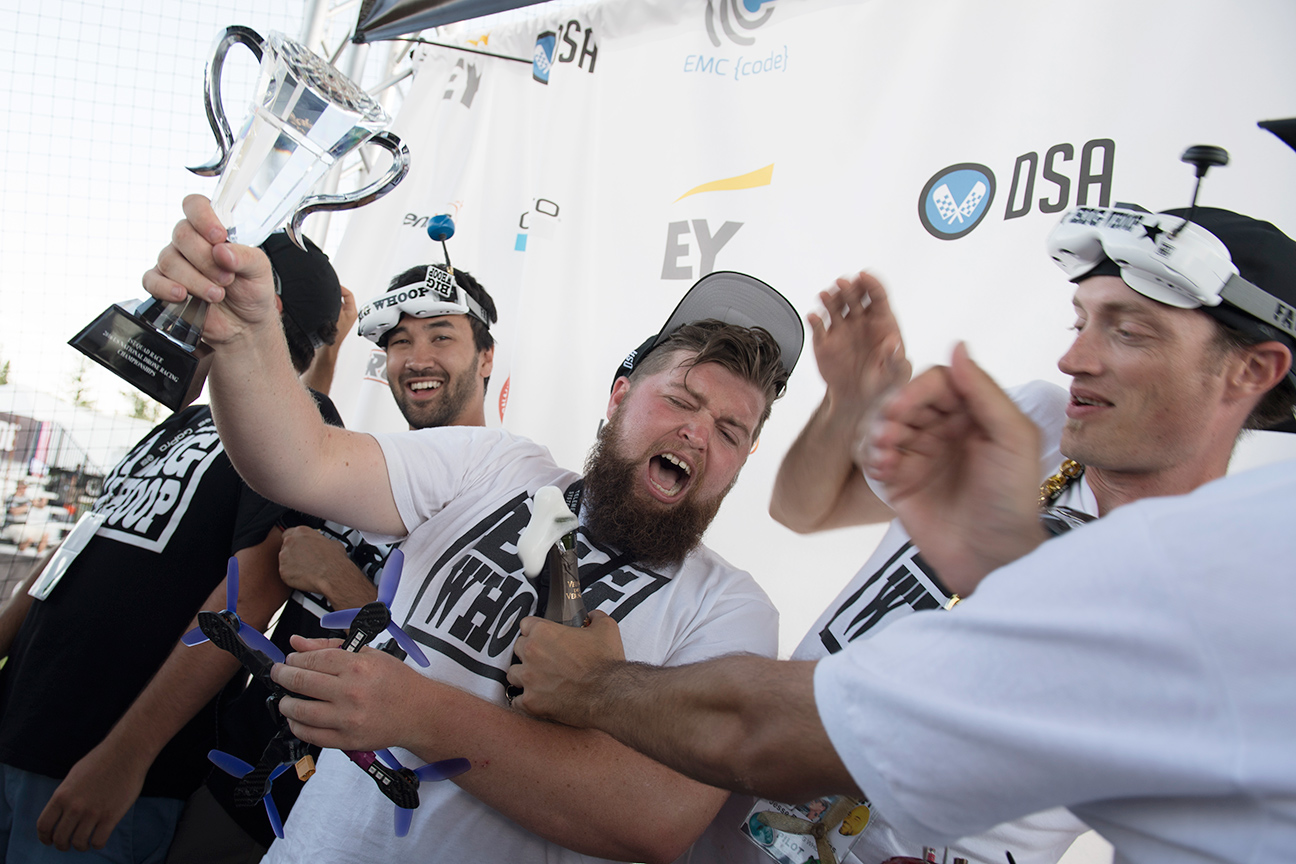 Zachry Thayer, center, and Jesse Ryan Perkins, right, of team Big Whoop, celebrate after Thayer won the championship, with a $50,000 prize, and the right to represent the United States at the inaugural World Drone Racing Championships in Hawaii this October.