n the banks of the Little Bighorn River, near the place where the famous Battle of the Greasy Grass (commonly known as Custer's Last Stand) was fought, sits Crow Agency, Montana.

Annually since 1904, the Crow Fair has brought together upward of 10,000 members of the Crow and other Great Plains tribes to this spot for a powwow, parades, dancing, horse racing and a rodeo.

The "Teepee Capital of the World" is an encampment of at least 1,000 teepees - during some fairs, that total climbs to about 1,500 -- reaching into the Big Sky Country about 60 miles east of Billings.

The parades wind through the massive campground with riders on horseback in celebration of a way of life that goes back thousands of years.

The gathering celebrates traditional dress, dancing, singing and drumming. It's a place of community, family and conversation. As the sun sets into the distant hills, celebrants return to their campsites to recount their memories and stories. Generations share their intertwining histories late into the crisp night.

The Crow Fair is rich in both hospitality and culture. The Native Americans who frequent the event never hesitate to break bread with their neighbors or extend their friendship to the strangers who come to witness their testament to tenacity.

The enticing smell of the food stands permeates the air, seeping into the powwow arena. The beautiful songs christen the night as sacred. Adults and children alike, adorned in vibrant traditional garb, dance in joyful circles as fairgoers watch from the grandstands. 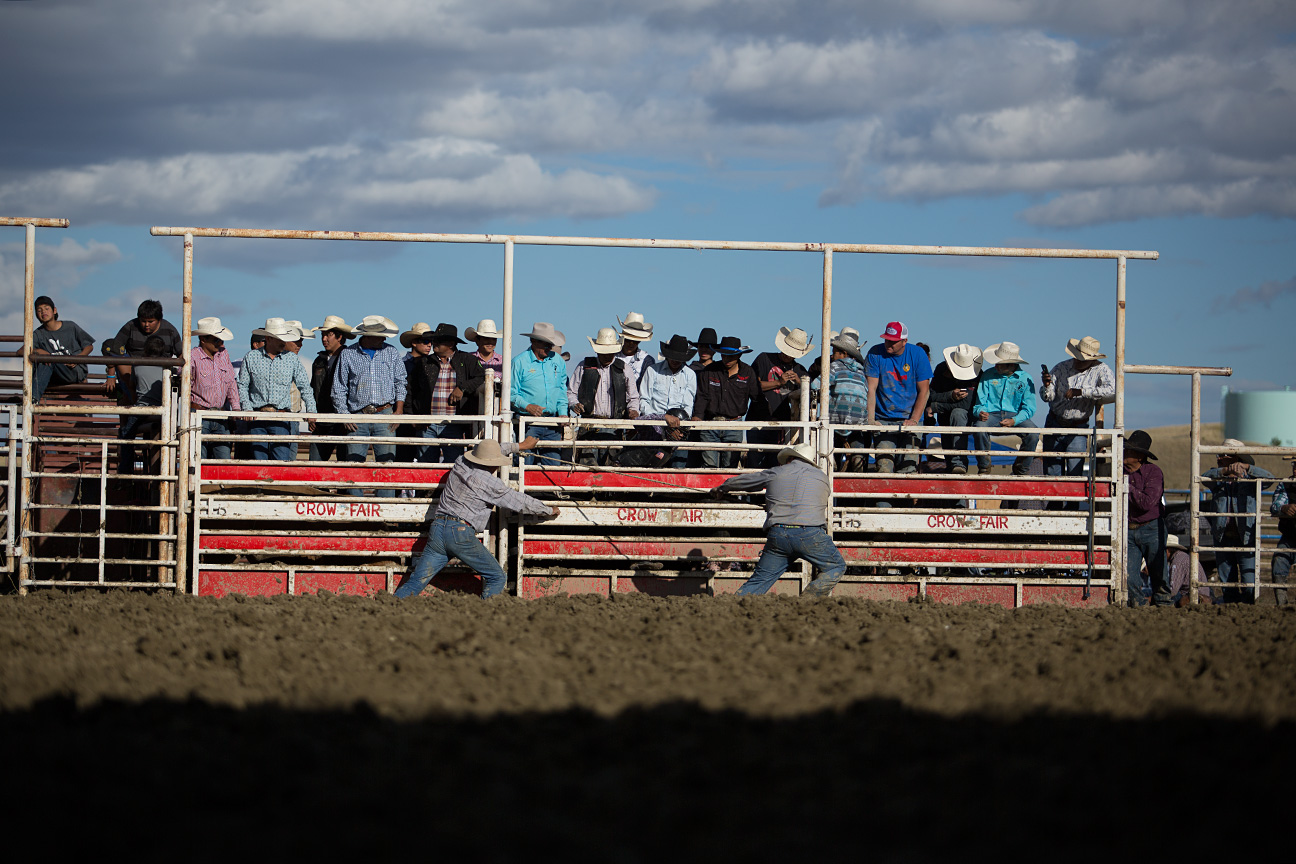 The gatemen prepare to open the gates during the bull riding competition at the 2016 Crow Fair Rodeo in August. 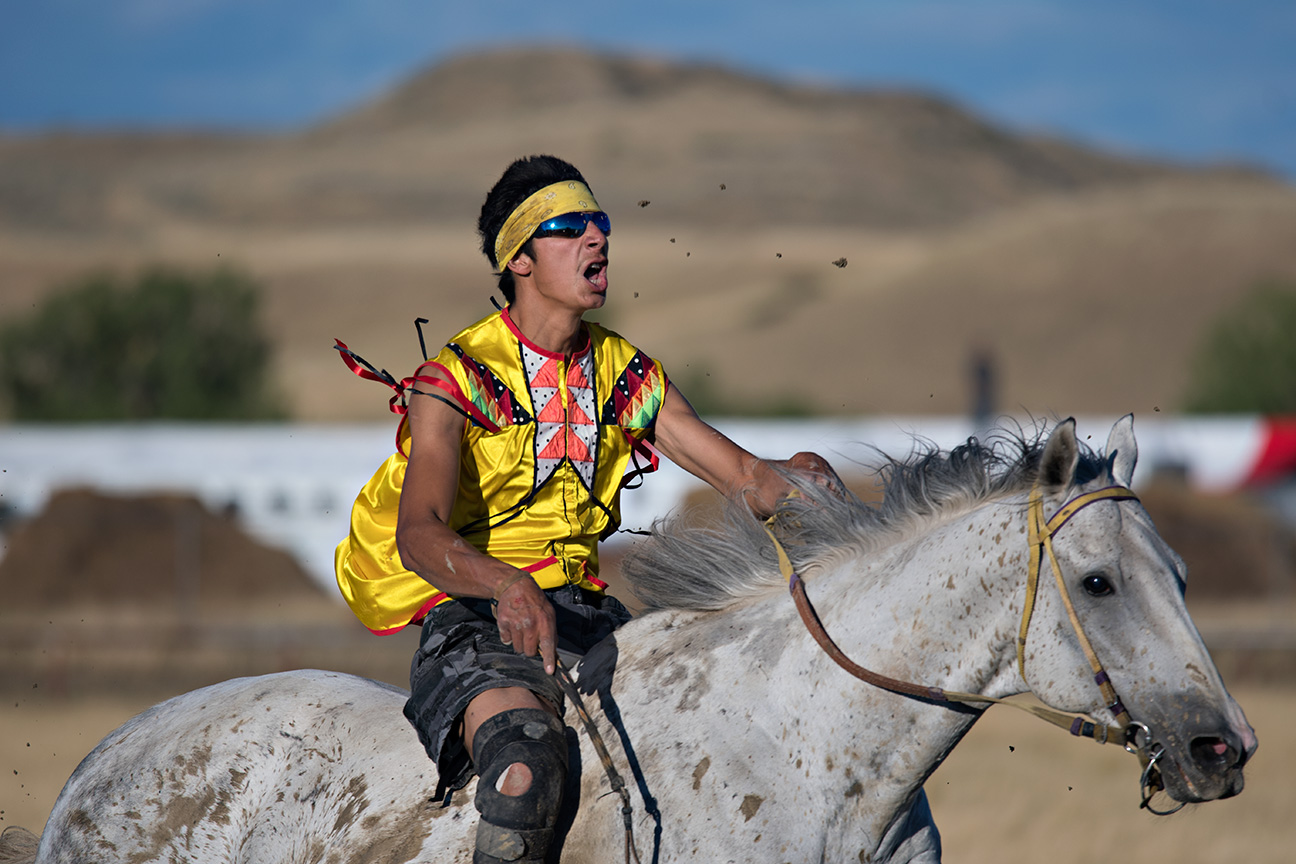 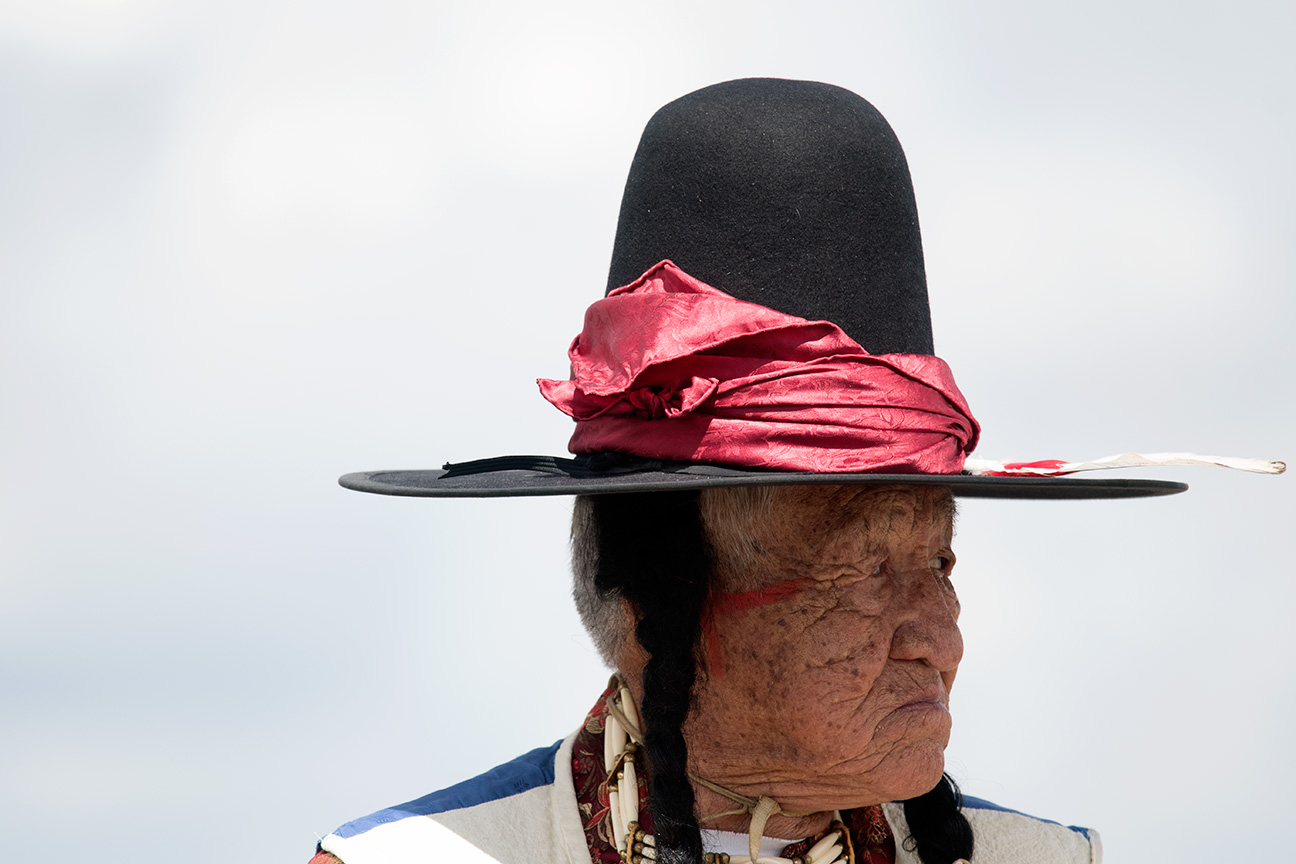 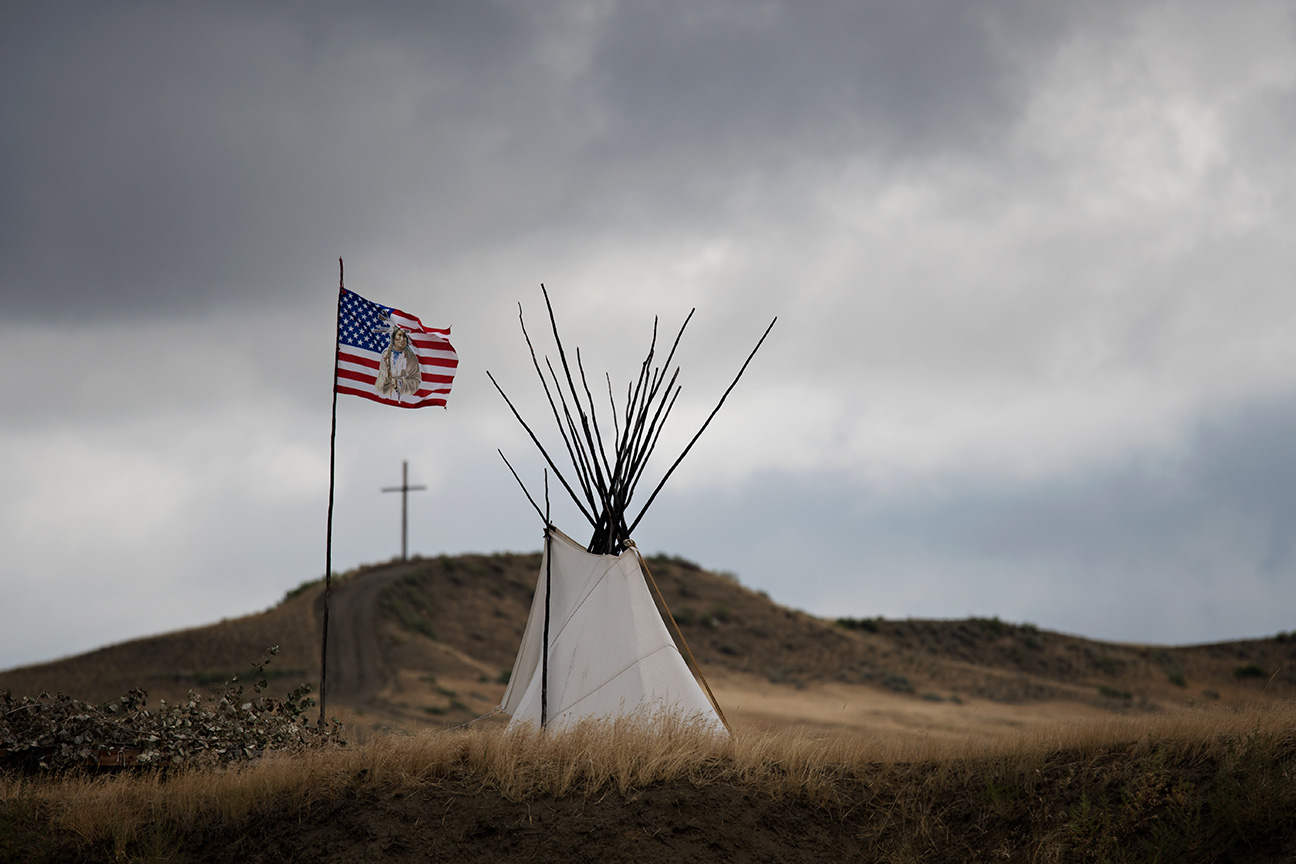 A cross stands atop a hill in the area of Custer's Last Stand (also known as the Battle of the Little Bighorn and the Battle of Greasy Grass). Lt. Col. George Armstrong Custer 's 7th Cavalry troops passed behind this hill as they tried to get positioned to fight tribal forces led by Lakota warrior Crazy Horse. 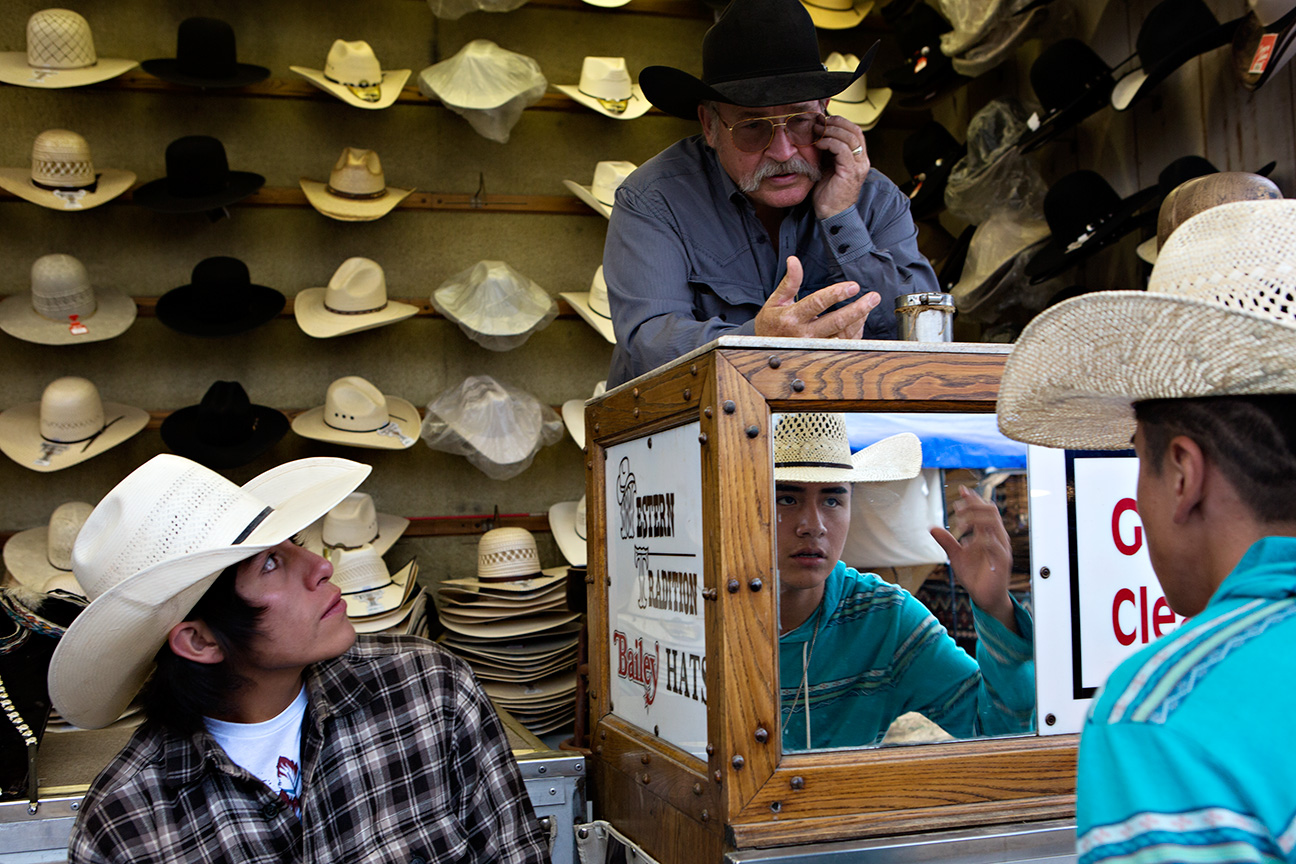 Rick Bishop, a cowboy hat shaper for 42 years at his first Crow Fair, consults with Miles Brien about his fit of his hat, while Jared Noseep looks on. 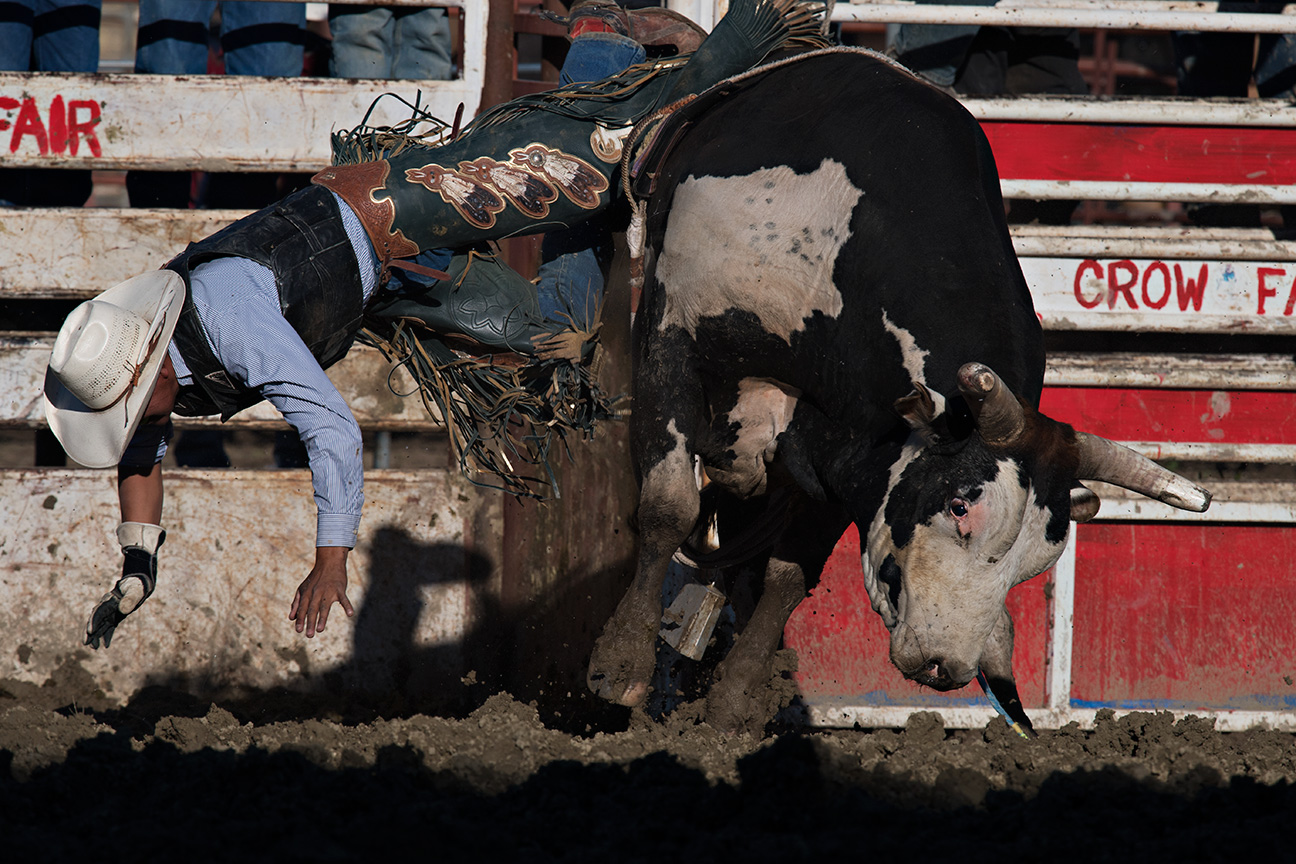 A rider is thrown during the bull riding event at the Crow Fair Rodeo. 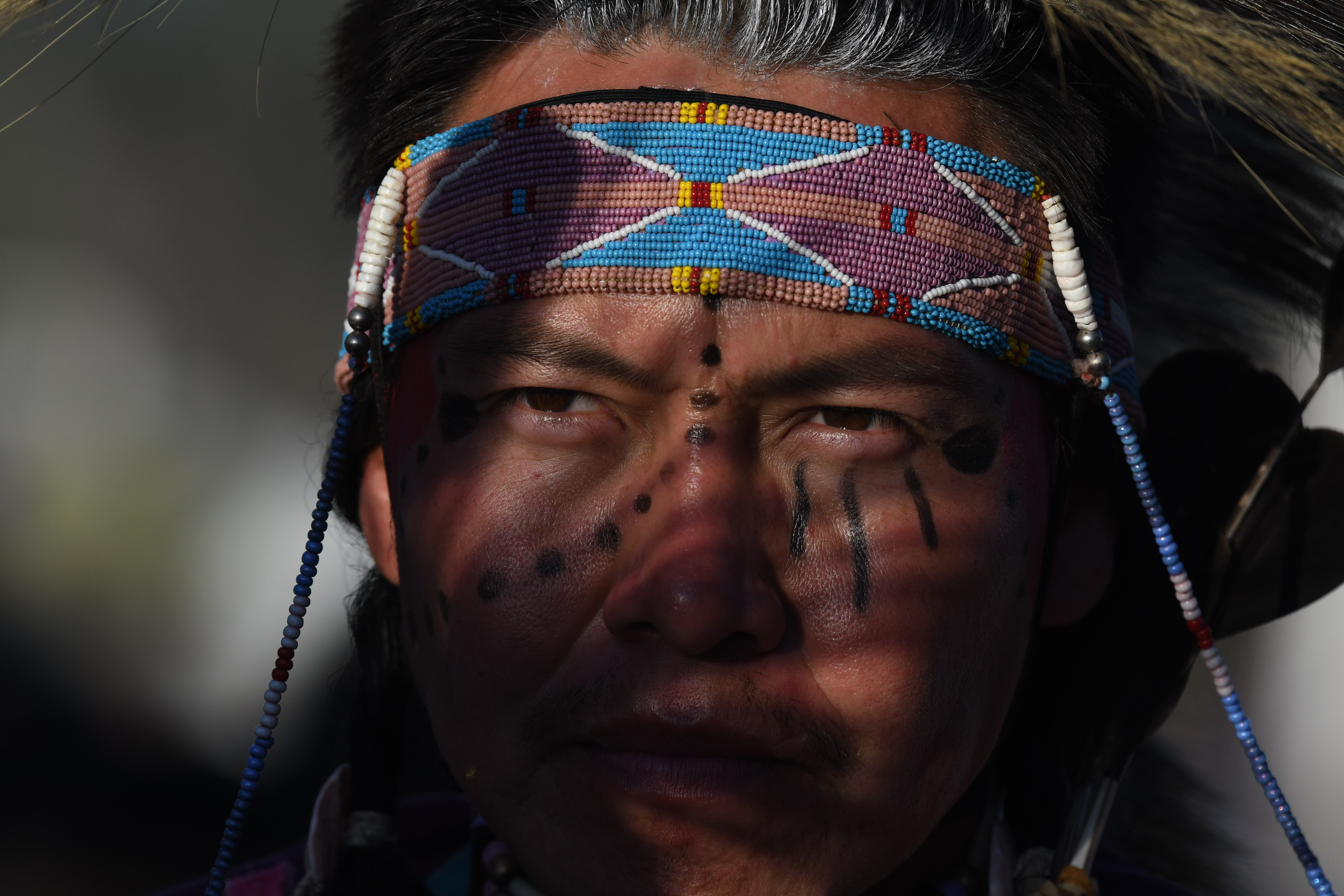 Prinz Three Irons participates in the Grand Entry at the Crow Fair. 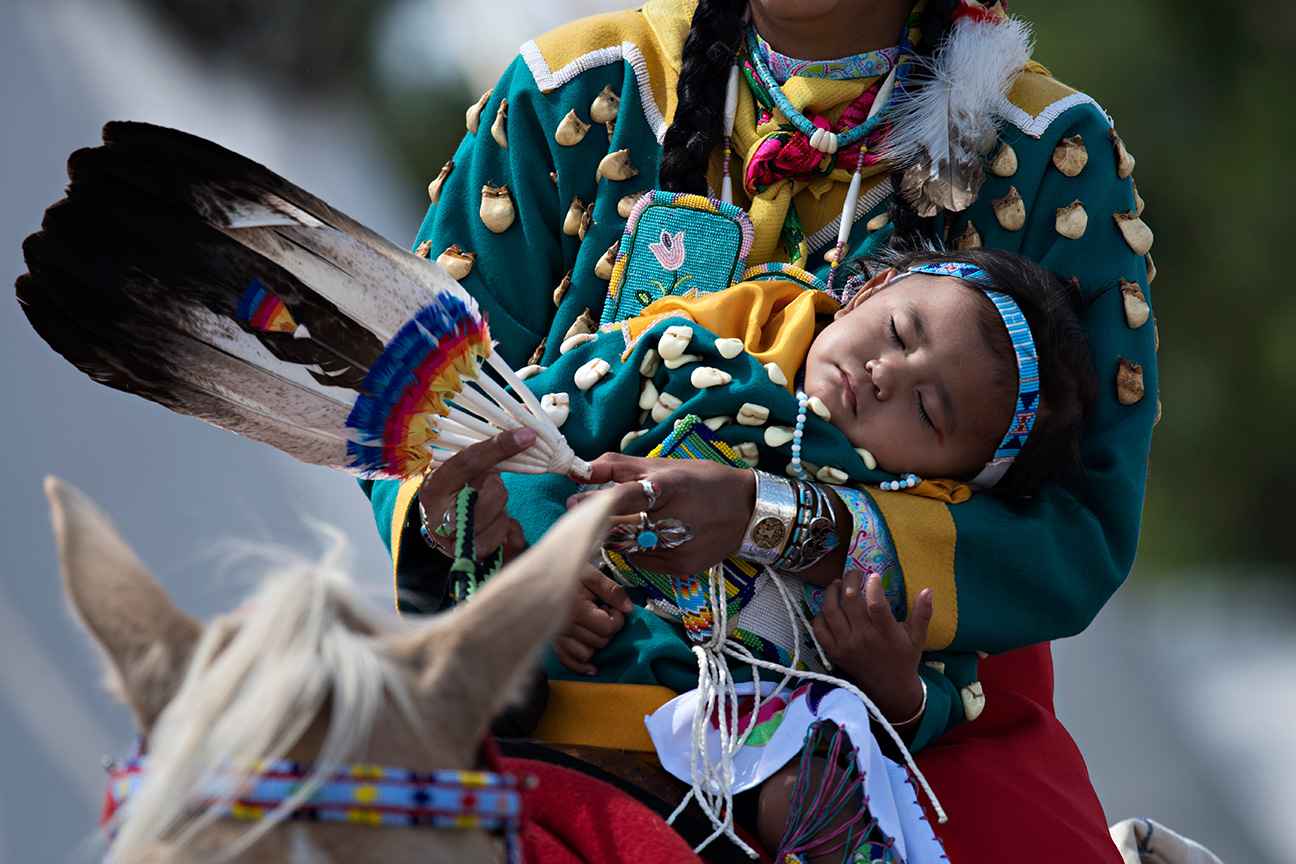 Ronnea Gramling holds her 1-year-old daughter, Amani, while riding through the camp area at the Crow Fair. Both are in traditional Crow dress. 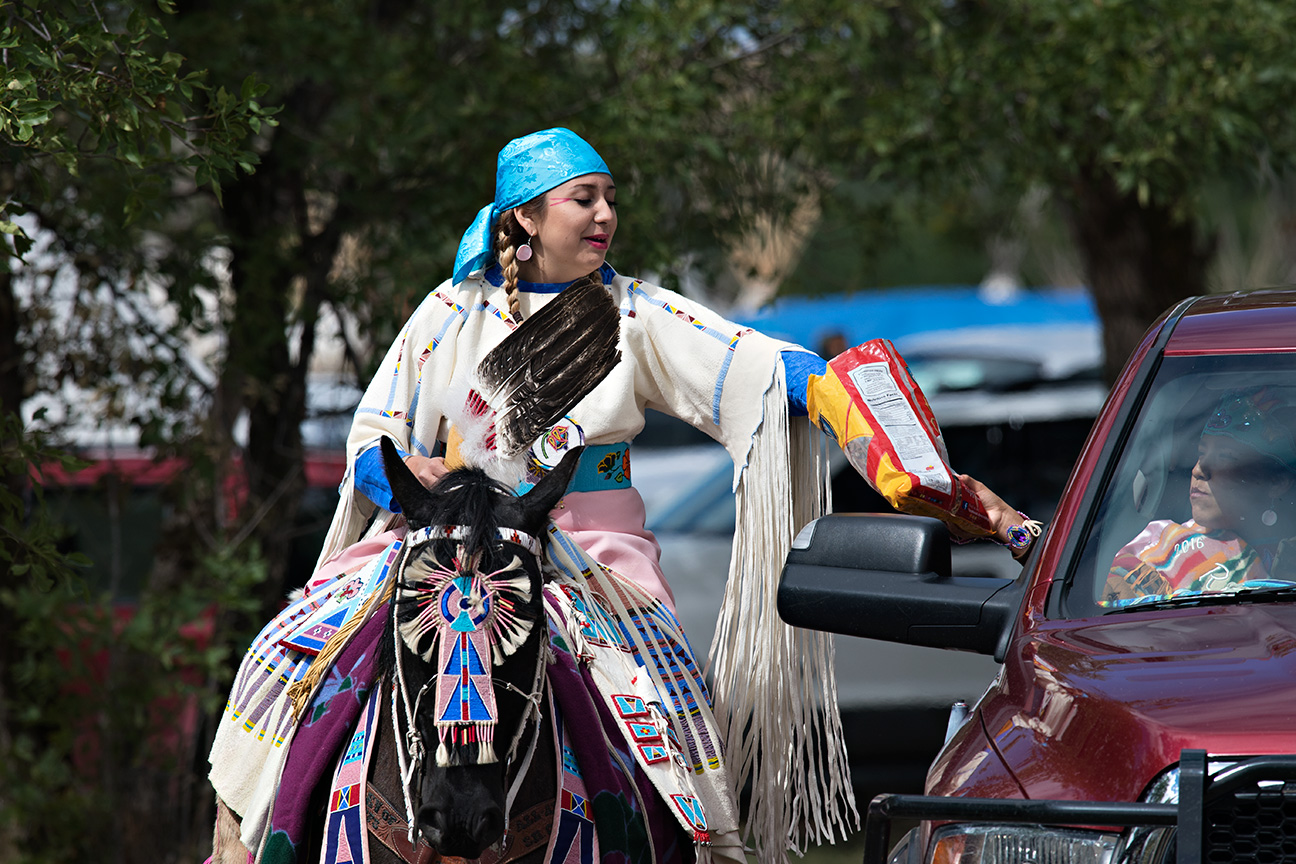 A rider in traditional Crow dress grabs a snack from a car passenger while heading to the arbor on the fairgrounds. A mix of modern and traditional elements are constantly in play at the Crow Fair. 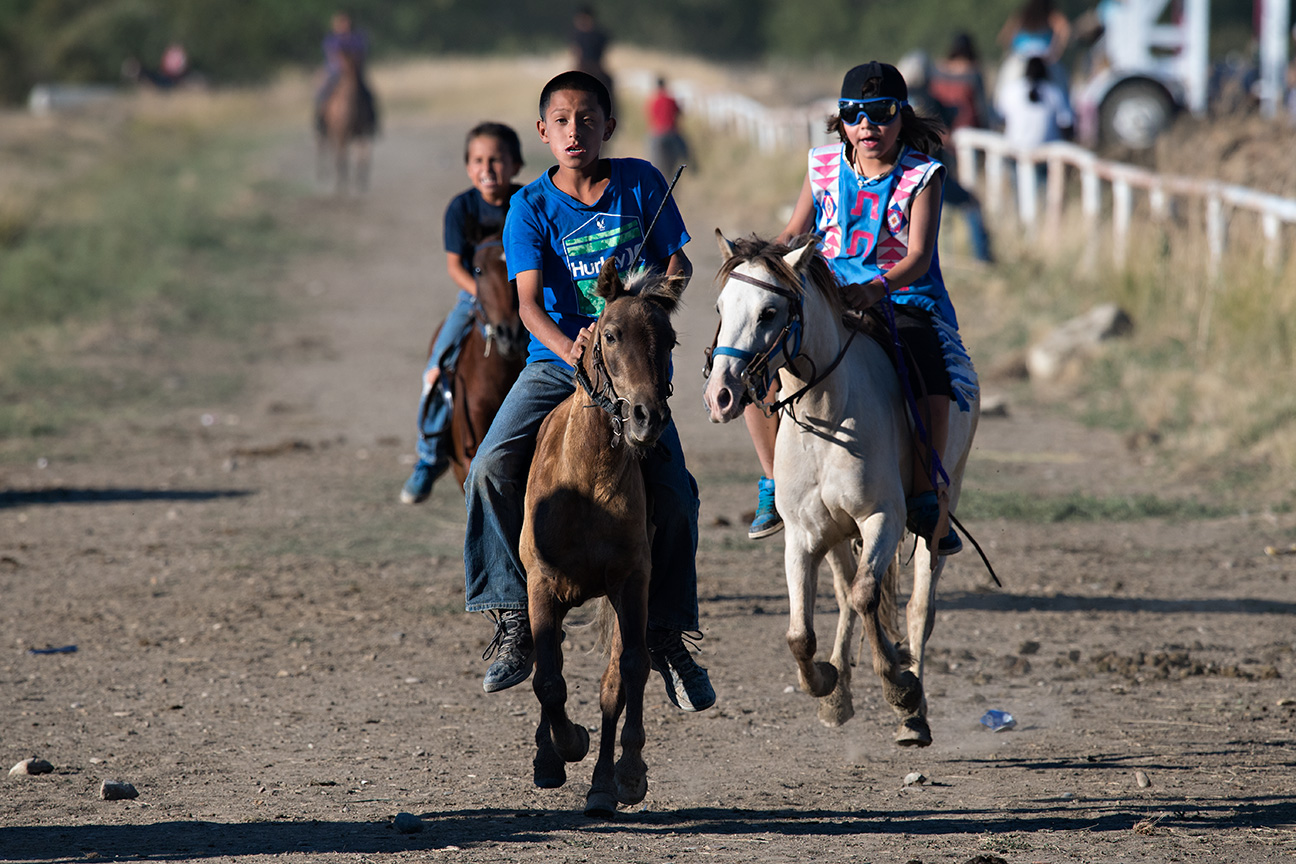 Children racing ponies isn't an official event at the Crow Fair Rodeo, but these youngsters look like they're having fun. 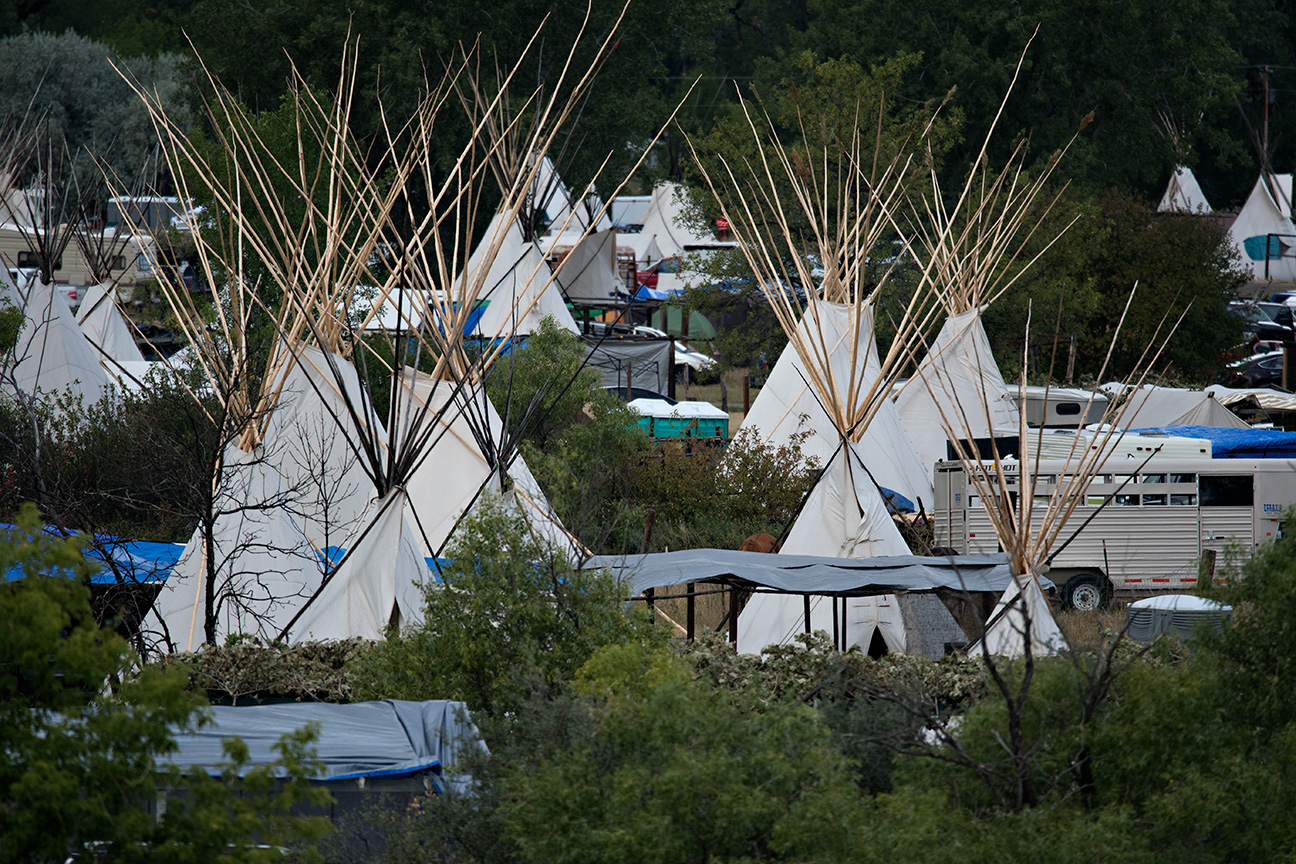 The Crow Fair campground is known as "The Teepee Capital of the World." This year's gathering included an estimated 1,000 teepees. 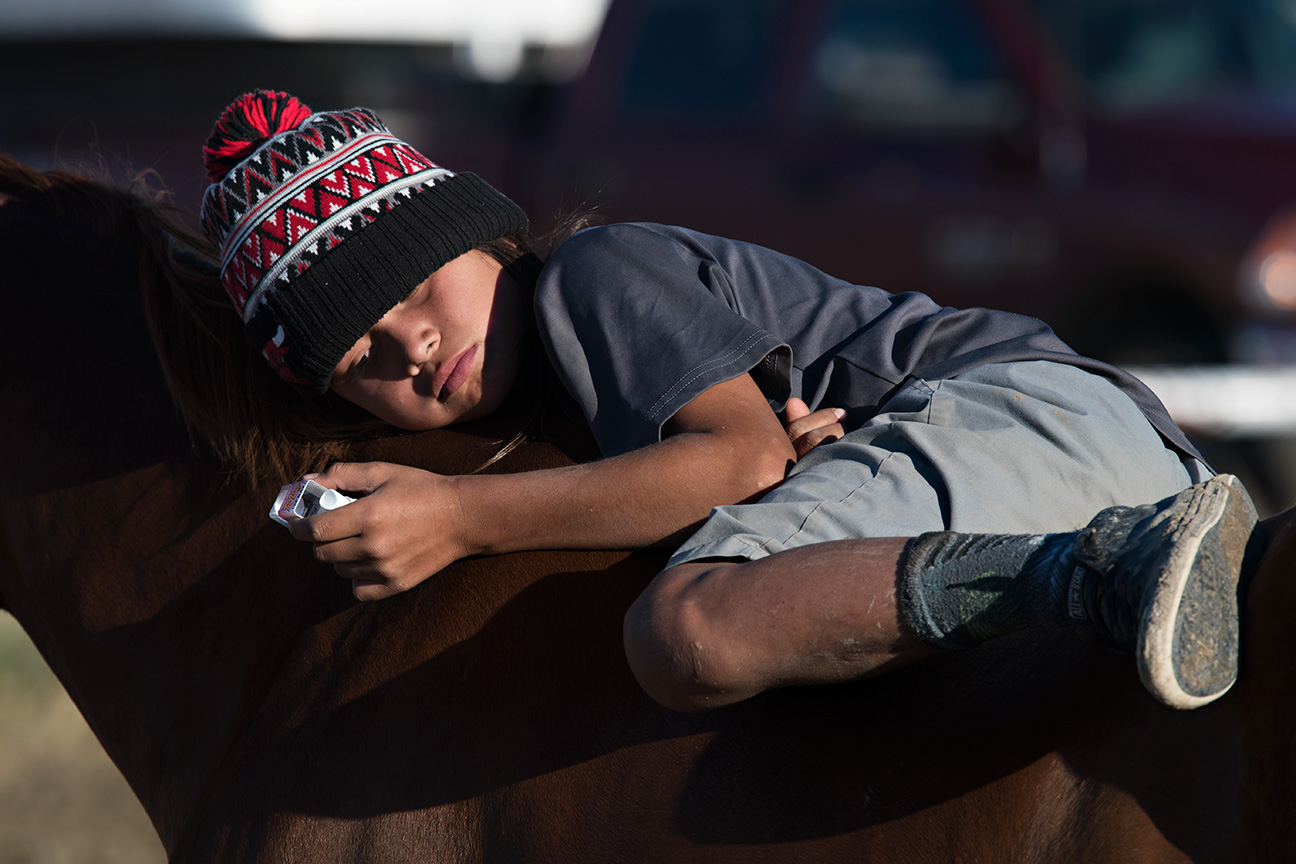 A young spectator at the Crow Fair Rodeo relaxes while on horseback. 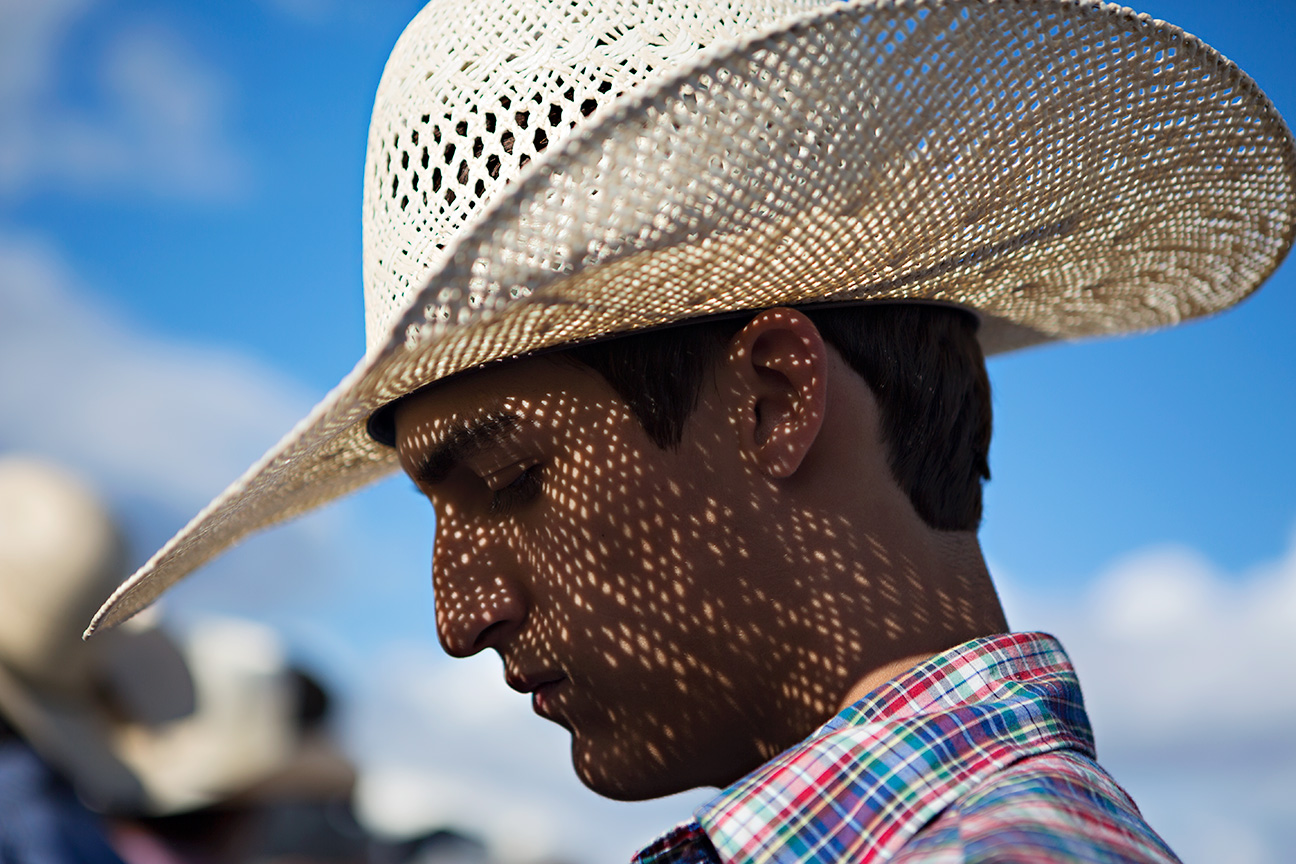 Connor Whiting of Valentine, Nebraska, waits for his turn to compete in the bull riding event at the Crow Fair Rodeo. 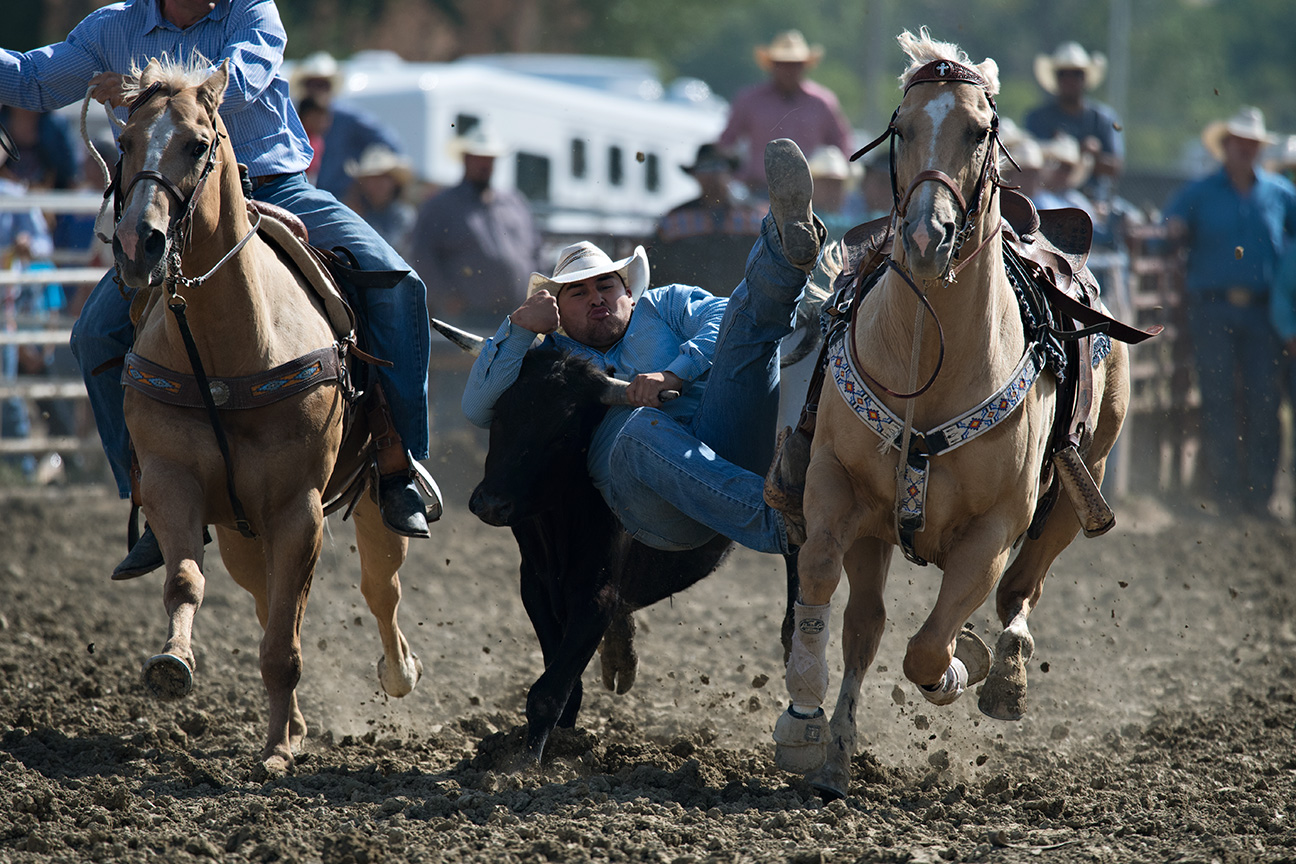 During the steer wrestling event, or bulldogging, at the Crow Fair Rodeo, the cowboy on horseback chases a steer, drops from his horse to the steer and tries to wrestle it to the ground using the animal's horns for leverage. 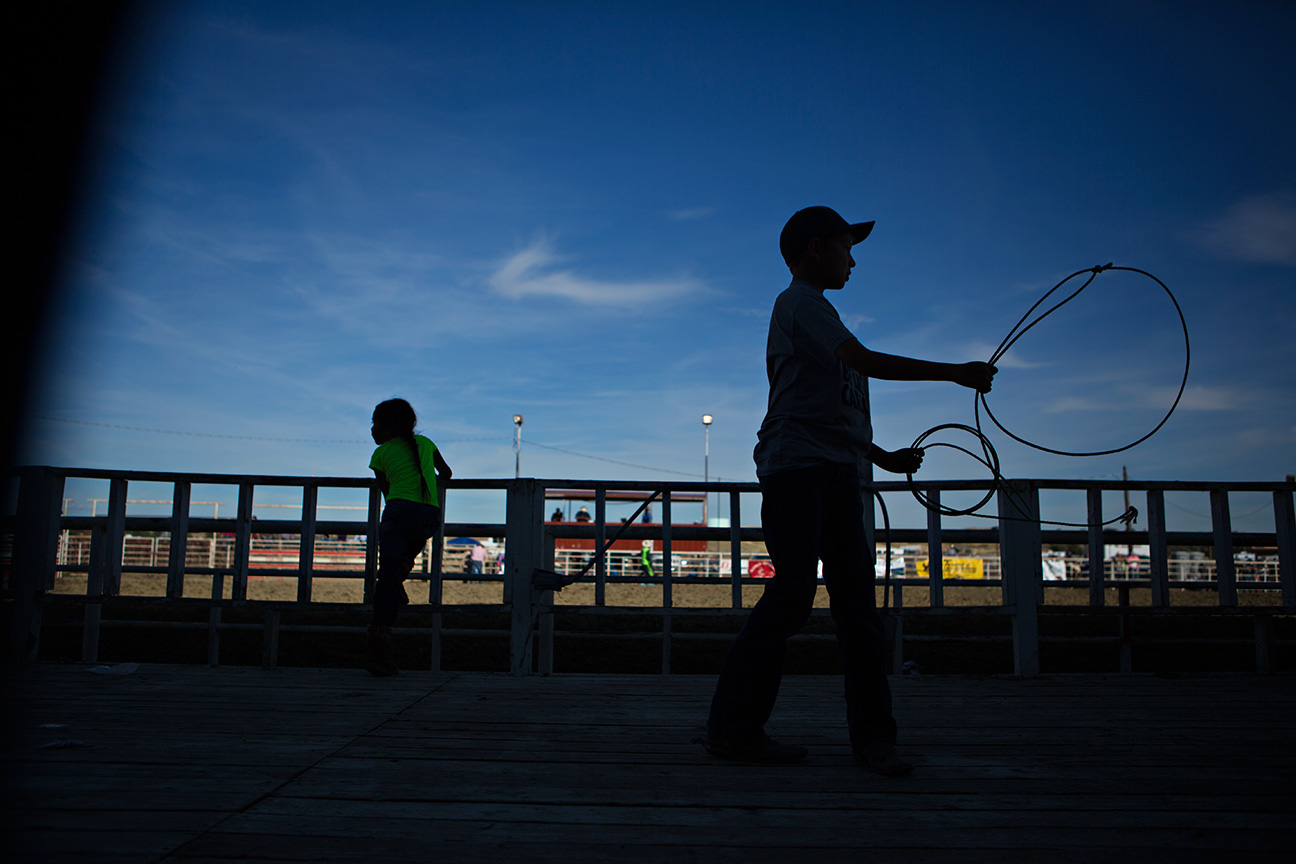 Twelve-year-old Colton Zubach of Billings, Montana, swings a lariat at the Crow Fair. 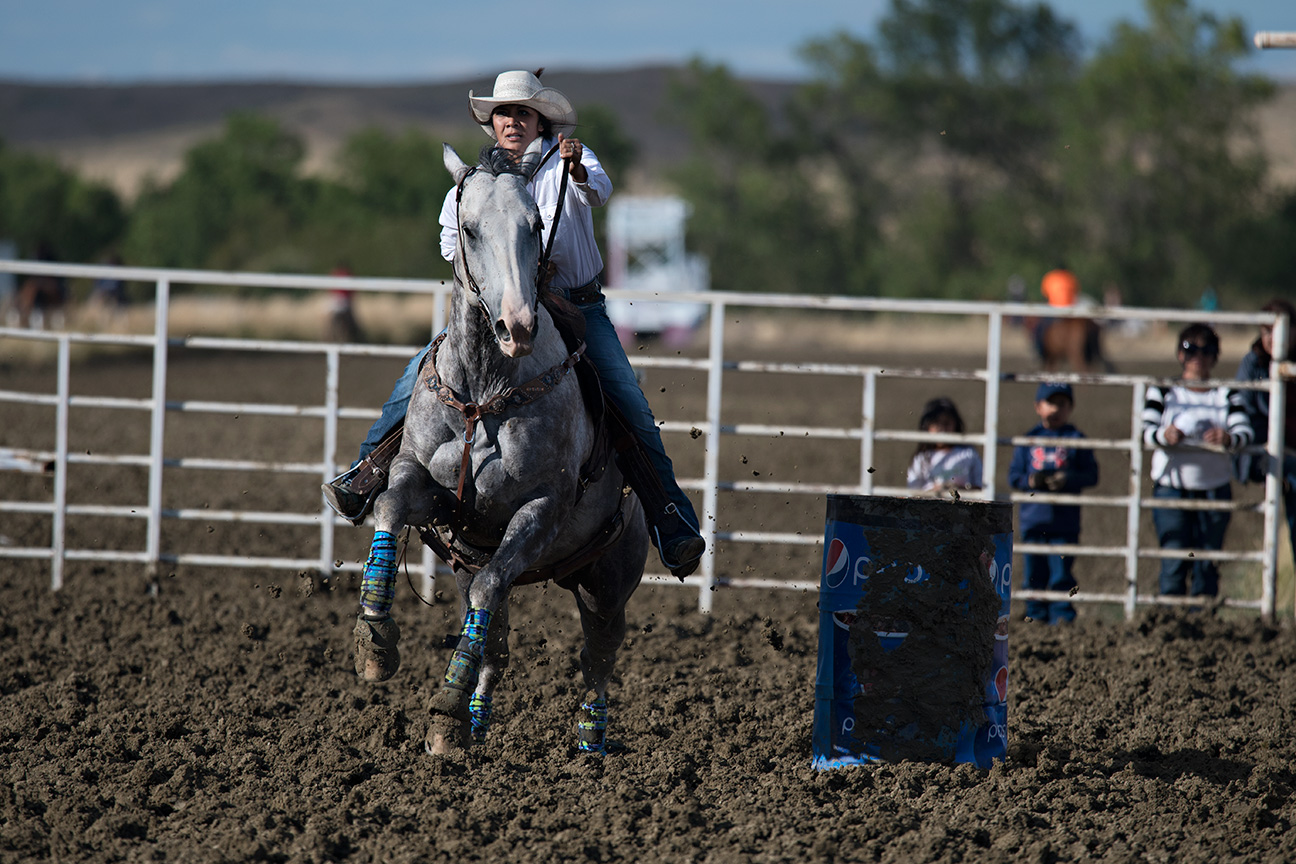 Kala Gonzalez participates in barrel racing, an event in which riders complete a cloverleaf pattern around the barrels in the fastest time. 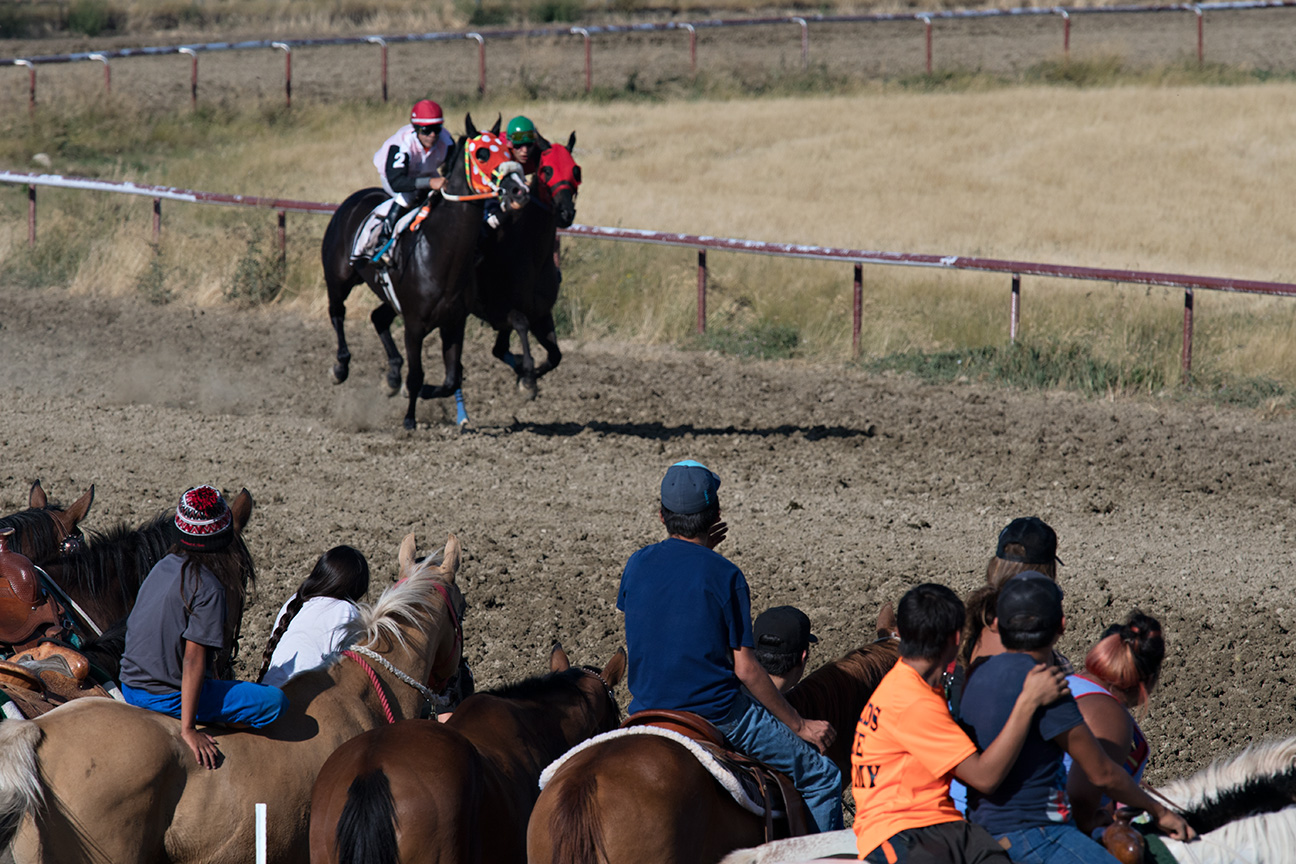 Spectators on horseback watch a one-mile horse race on a dirt track at the Crow Fair. 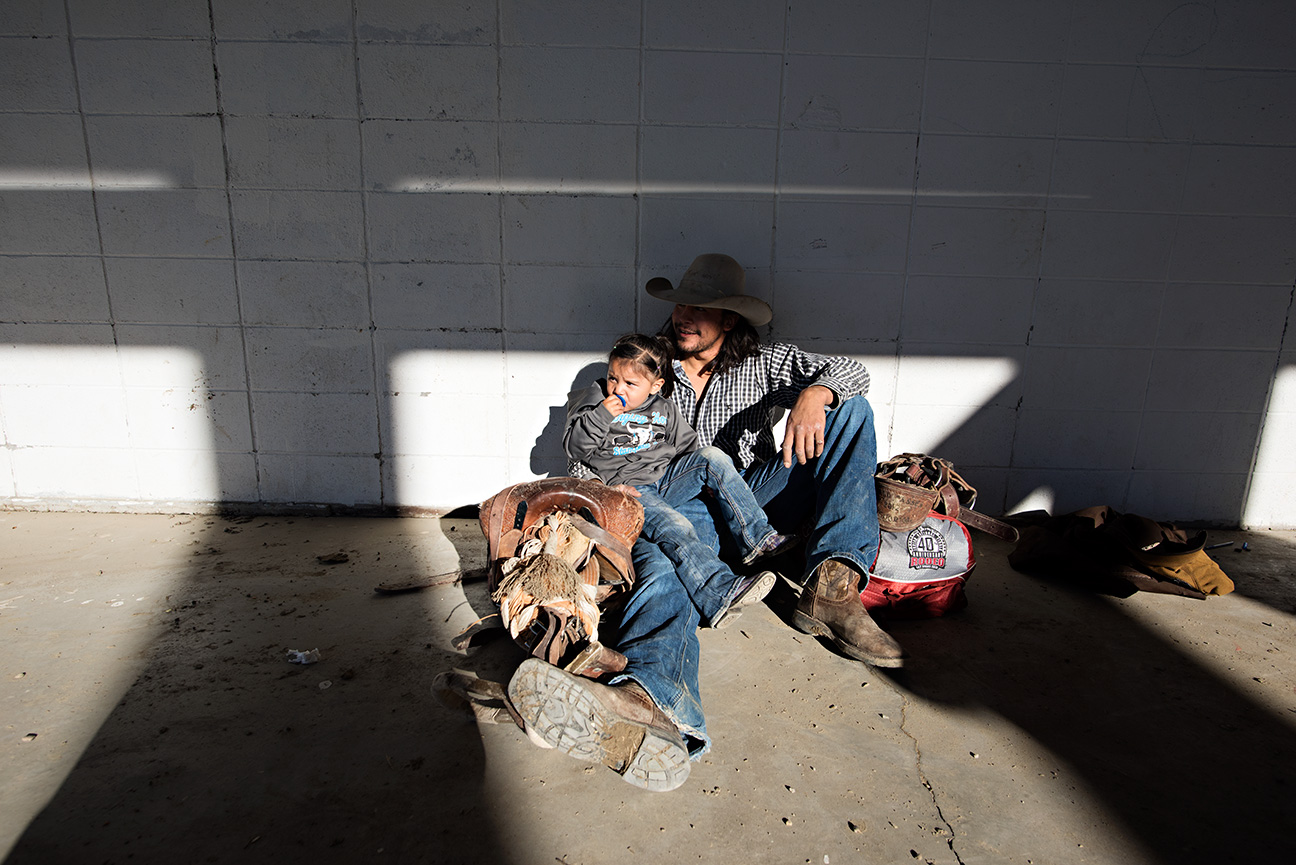 Cowboy Robert Wagner of Browning, Montana, relaxes after a hard day of saddle bronc riding at the Crow Fair Rodeo. 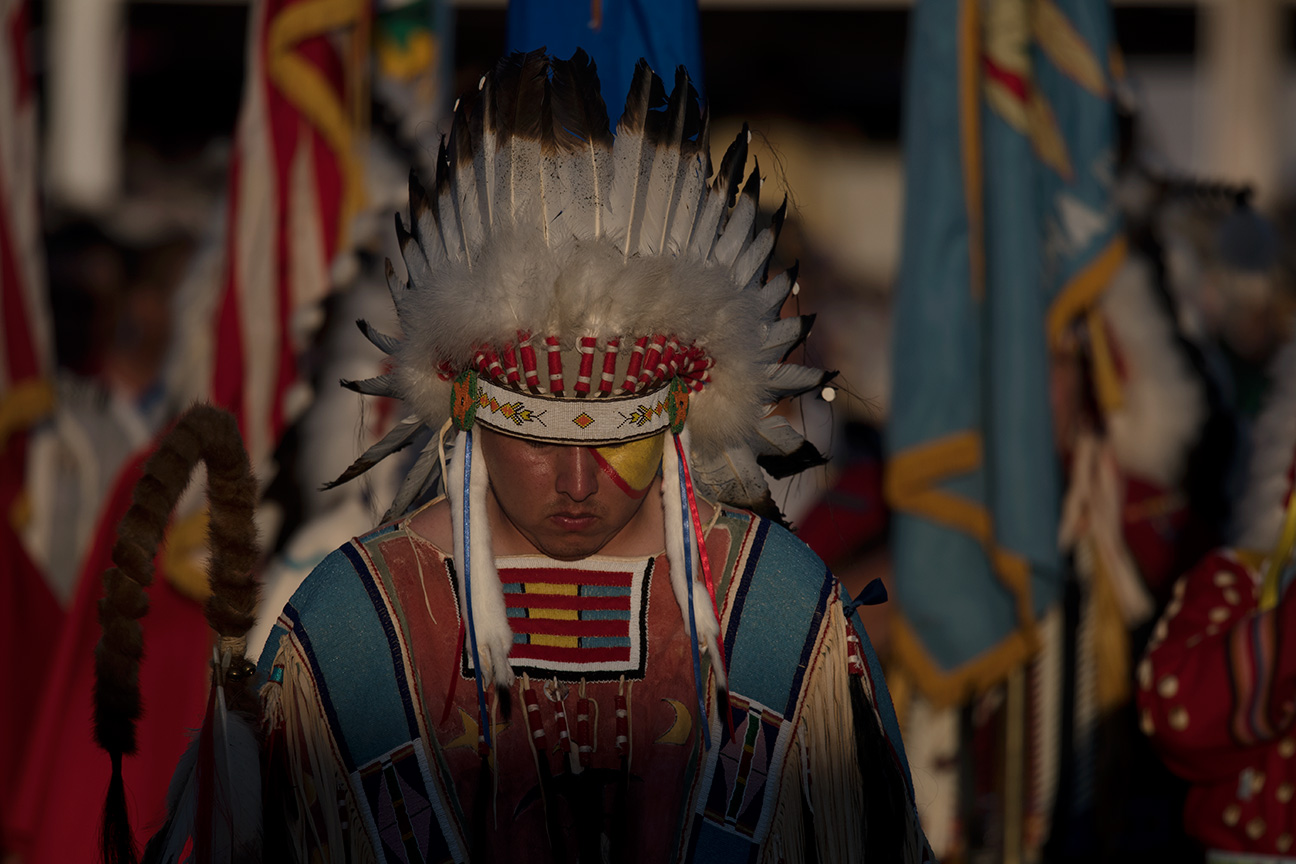 Dylan Jefferson, a veteran honored for his service and dedication, leads the Women Warriors Veterans during the Grand Entry procession. 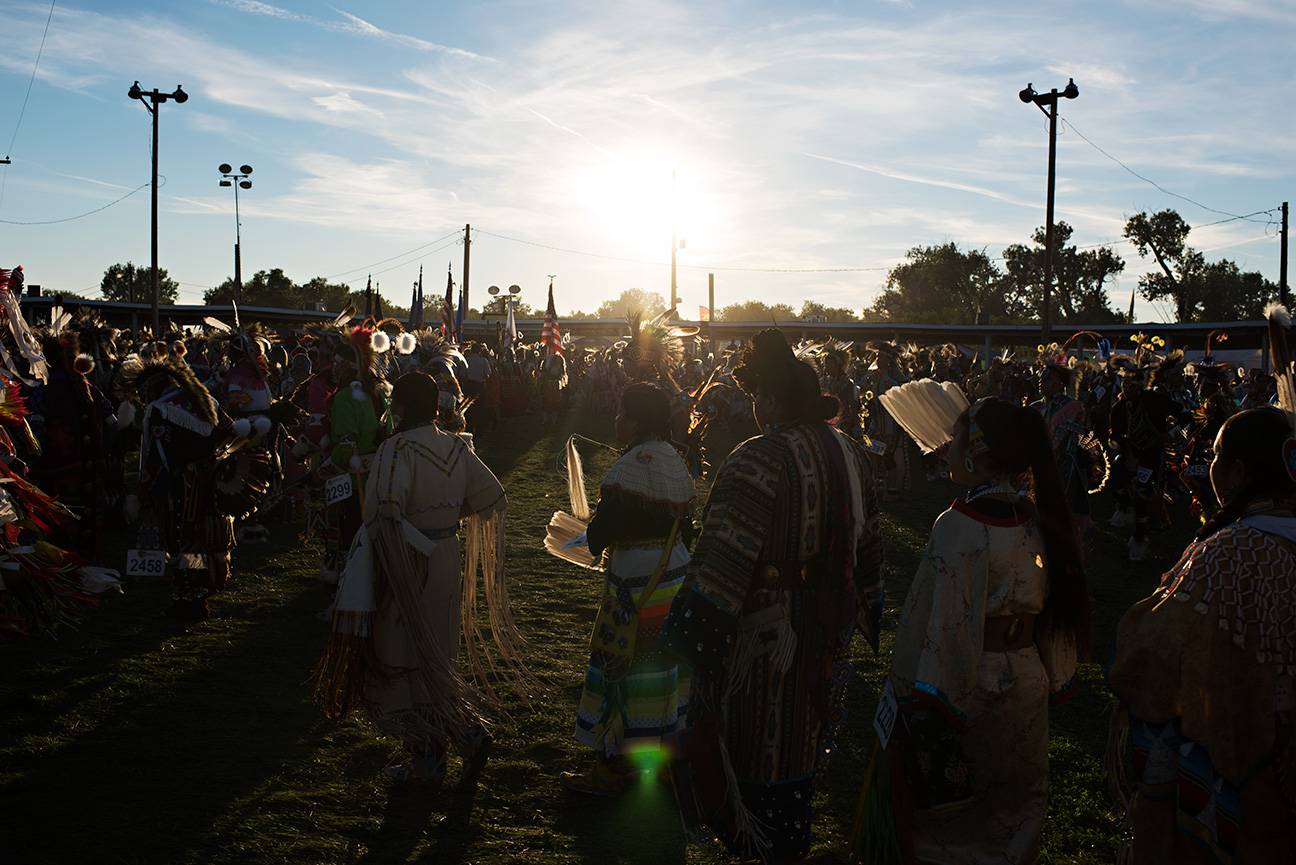 With the sun on the way down, the Woman Warrior Veterans Grand Entry takes place at the Crow Fair. 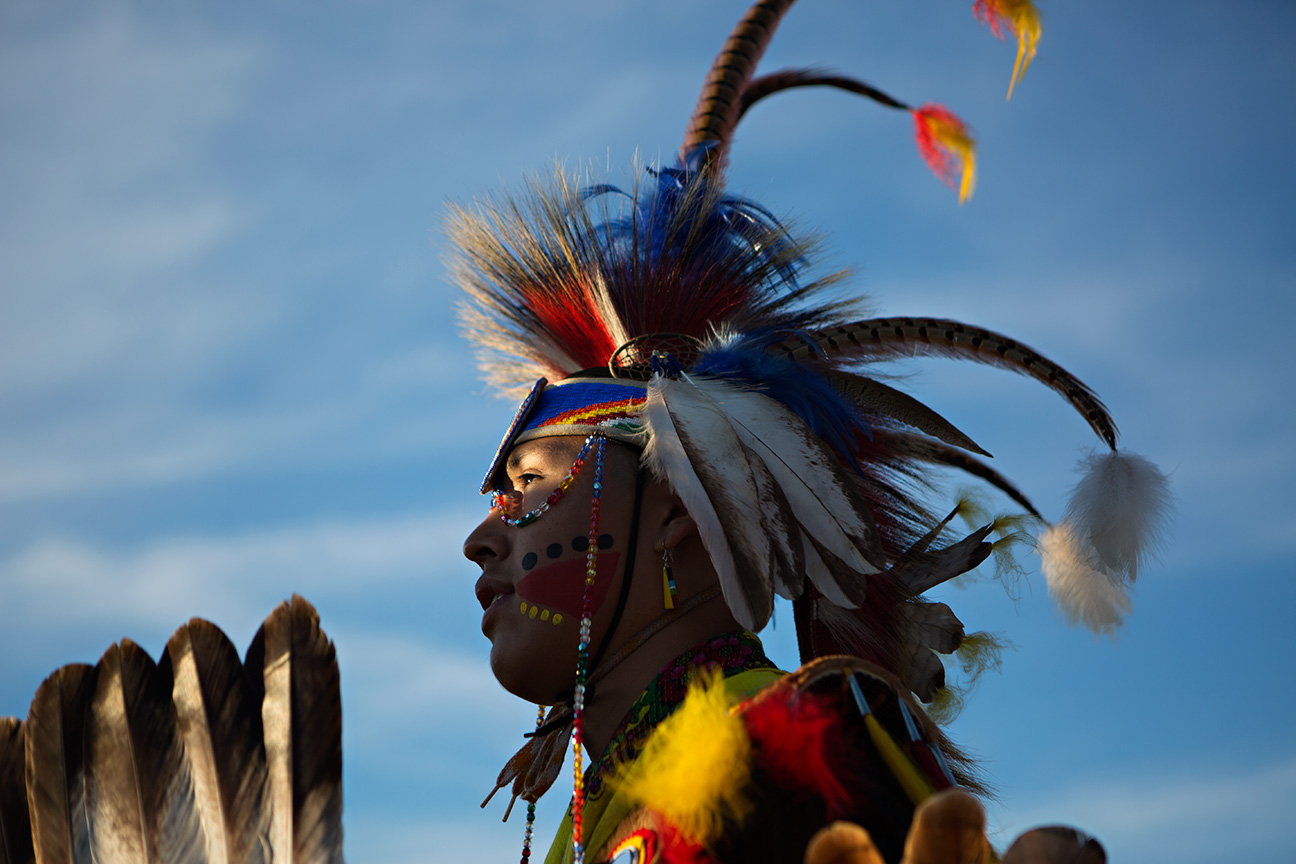 A Native American man dances during a powwow at the Crow Fair.