lemson and Alabama. A championship rematch was in the forefront of everyone's minds after last year's epic finished with a thrilling, 45-40 Crimson Tide victory. And the rematch delivered. This season's College Football Playoff National Championship presented by AT&T will long be remembered for perhaps the most exciting final five minutes in championship game history.

The Tigers, down throughout the first three quarters to previously undefeated and seemingly invincible Alabama, showed the same resilience they displayed throughout the season behind a strong, physical defense. Then the offense took over, scoring 21 points in the fourth quarter to overcome the Tide.

With all eyes on him, Clemson quarterback Deshaun Watson made the type of plays expected from a two-time Heisman Trophy finalist on the final drive of his collegiate career. He hit receiver after receiver, bringing the Tigers their first championship since 1981.

During a timeout on that final drive, Watson walked up to his wide receivers and said, "Let's be legendary."

Boy, were they ever. 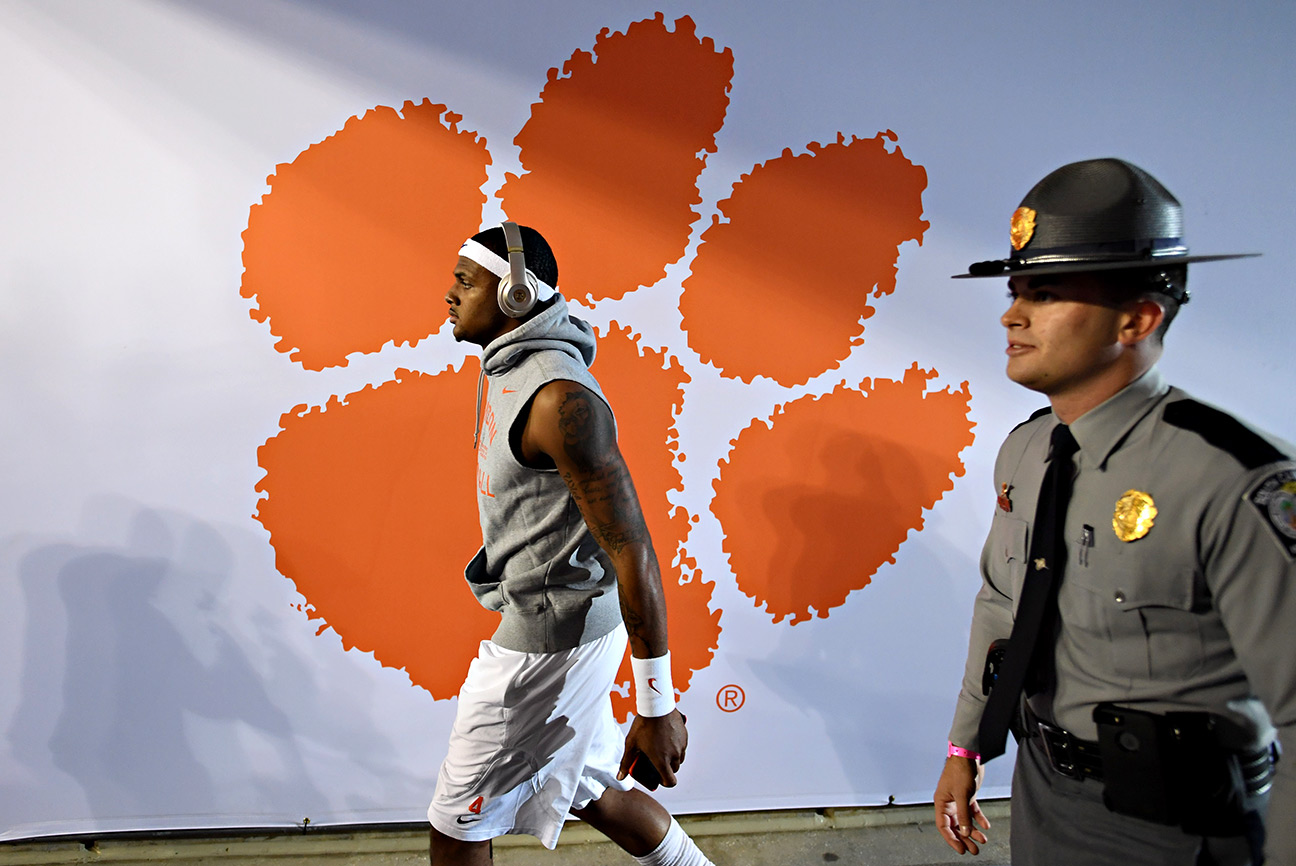 Watson walks by the team logo on his way out to the field for pregame warm-ups, while being escorted by a South Carolina state trooper. 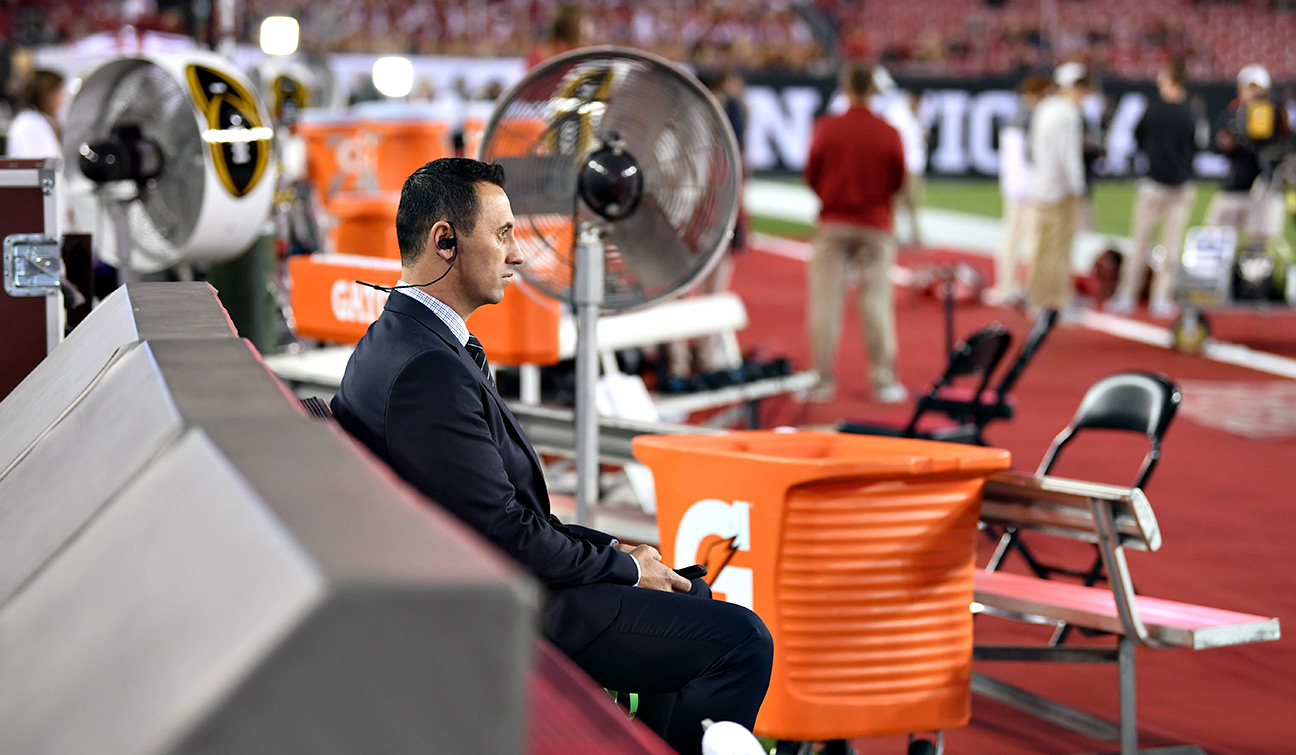 Sitting on the Alabama bench, Steve Sarkisian takes stock of Raymond James Stadium. This is his first game as Alabama's offensive coordinator, replacing Lane Kiffin, who parted ways with the Tide the week before the game to focus on his new gig as Florida Atlantic's head coach. 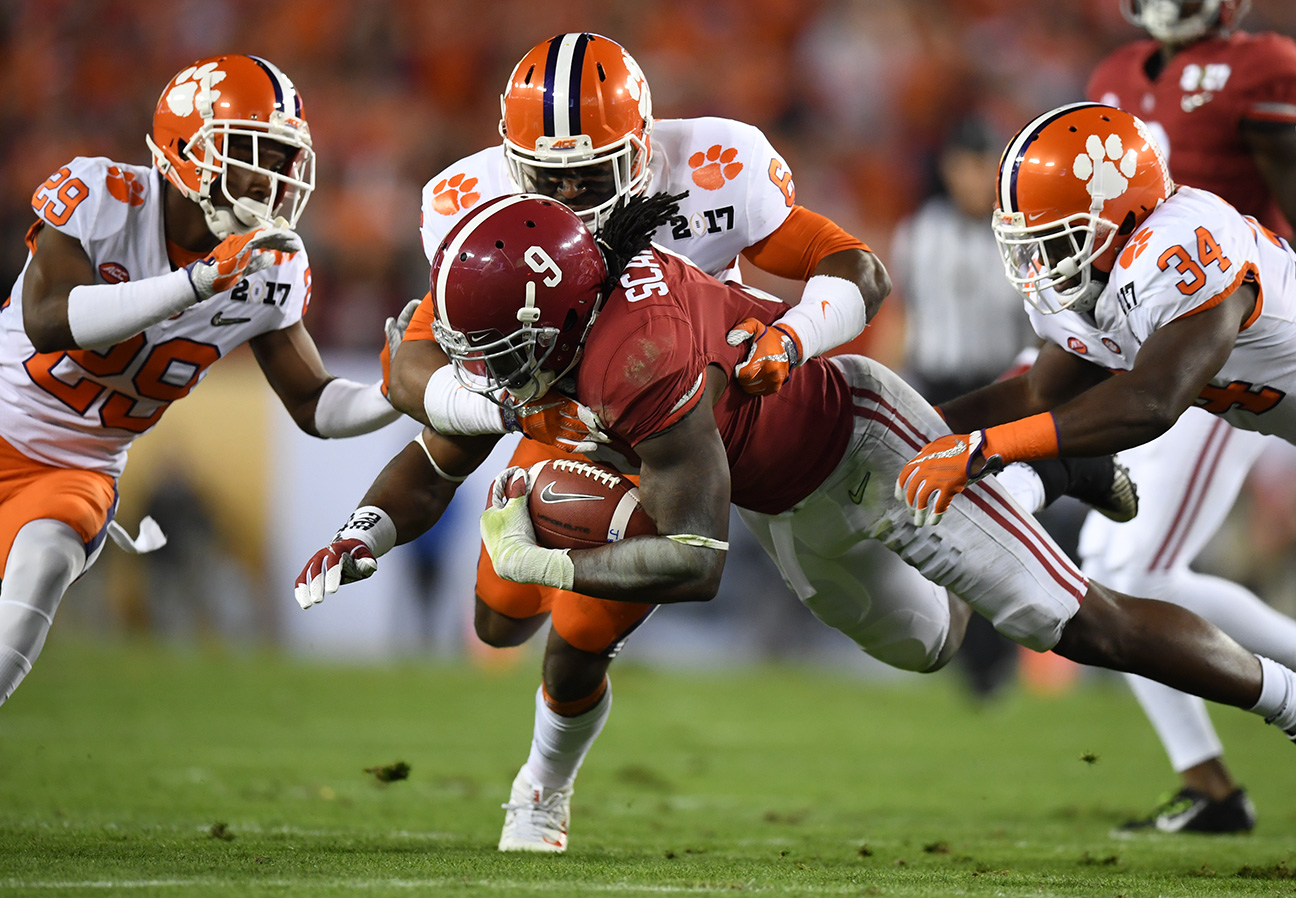 Alabama running back Bo Scarbrough finds some tough yards before being tackled by Clemson defenders during the first quarter. 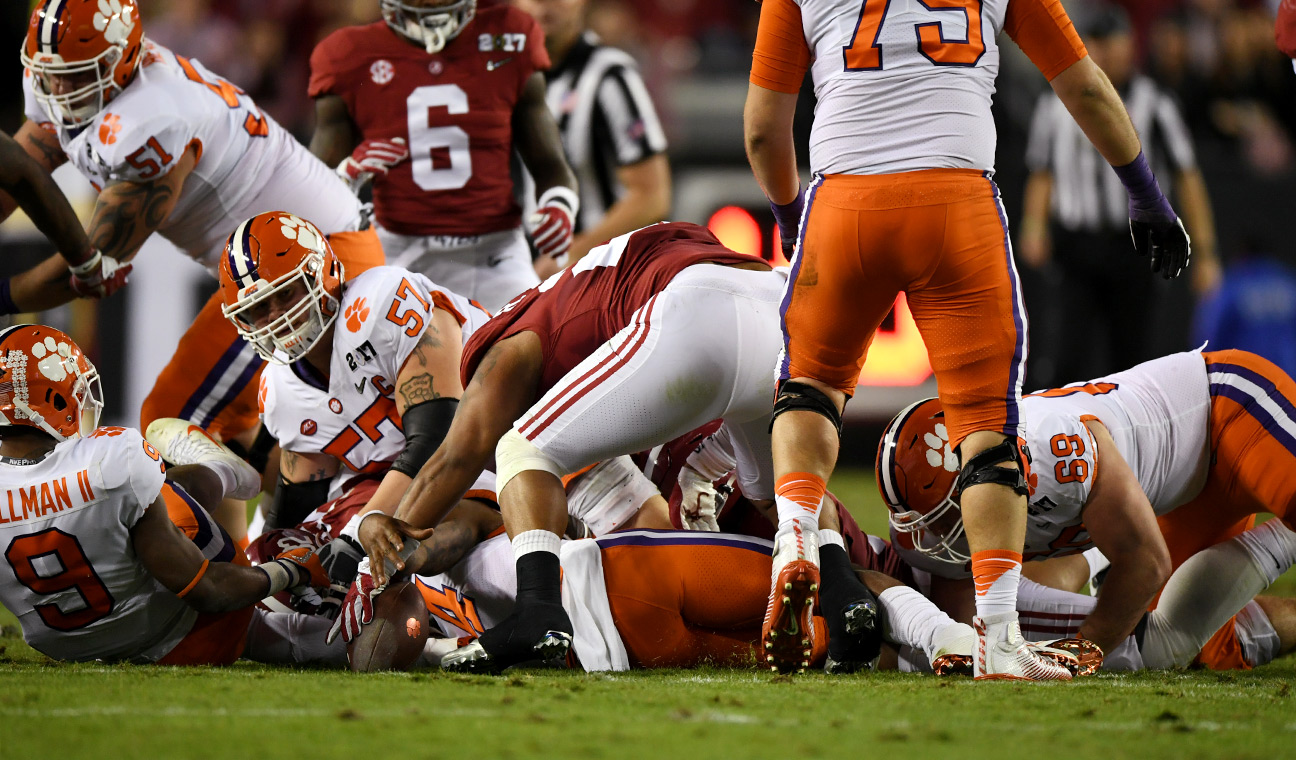 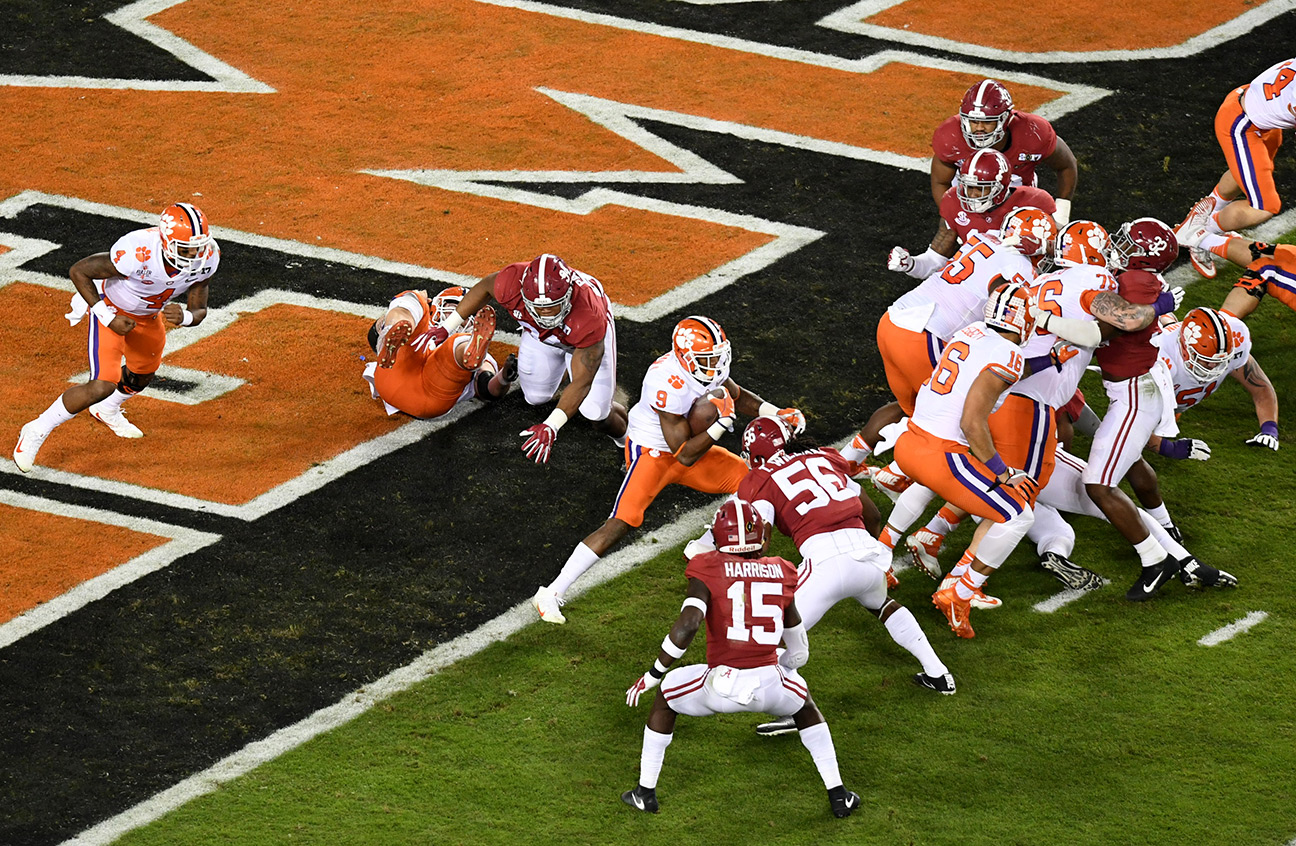 Starting from his own end zone, Gallman rushes for a 3-yard gain in the first quarter. The Tigers would struggle with field position much of the game. Through the first three quarters, their average starting point was at their own 19-yard line. 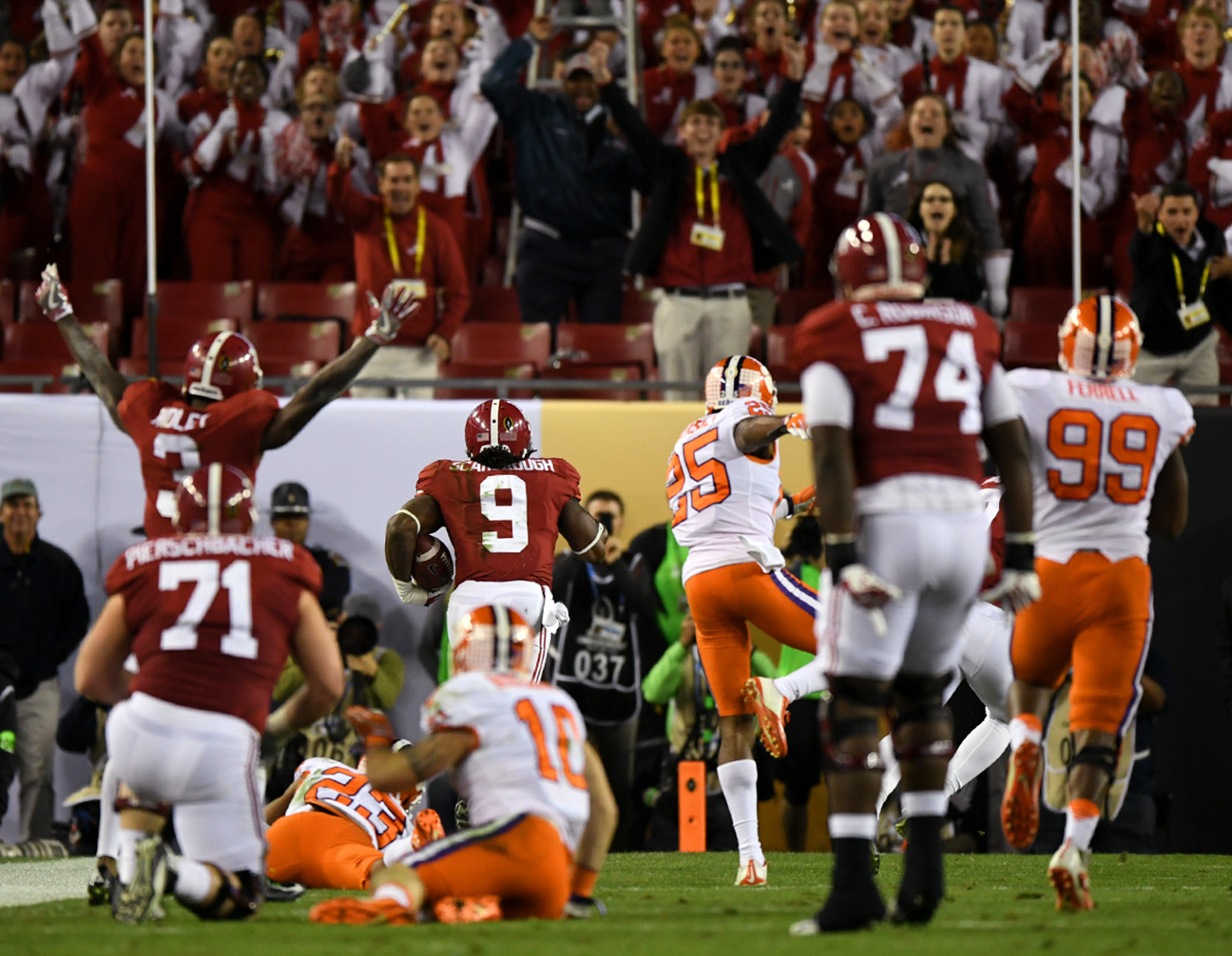 Scarbrough rumbles down the sideline for a 37-yard touchdown to put the Crimson Tide up 14-0 in the second quarter. 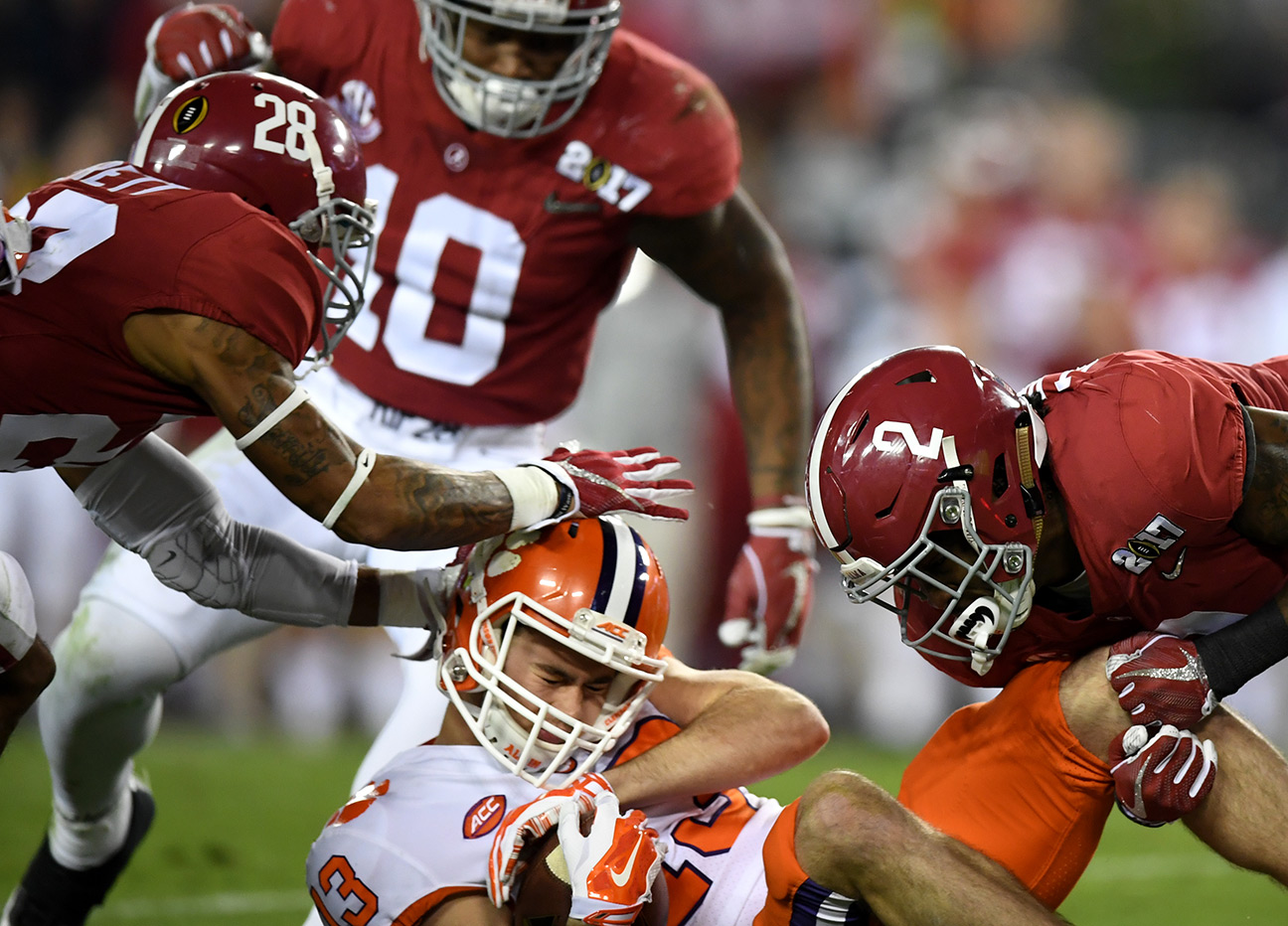 Clemson wide receiver Hunter Renfrow holds onto the ball as he is hit by Alabama defensive backs Anthony Averett and Tony Brown. Renfrow was a favorite receiver of Watson's with 10 catches in the game. 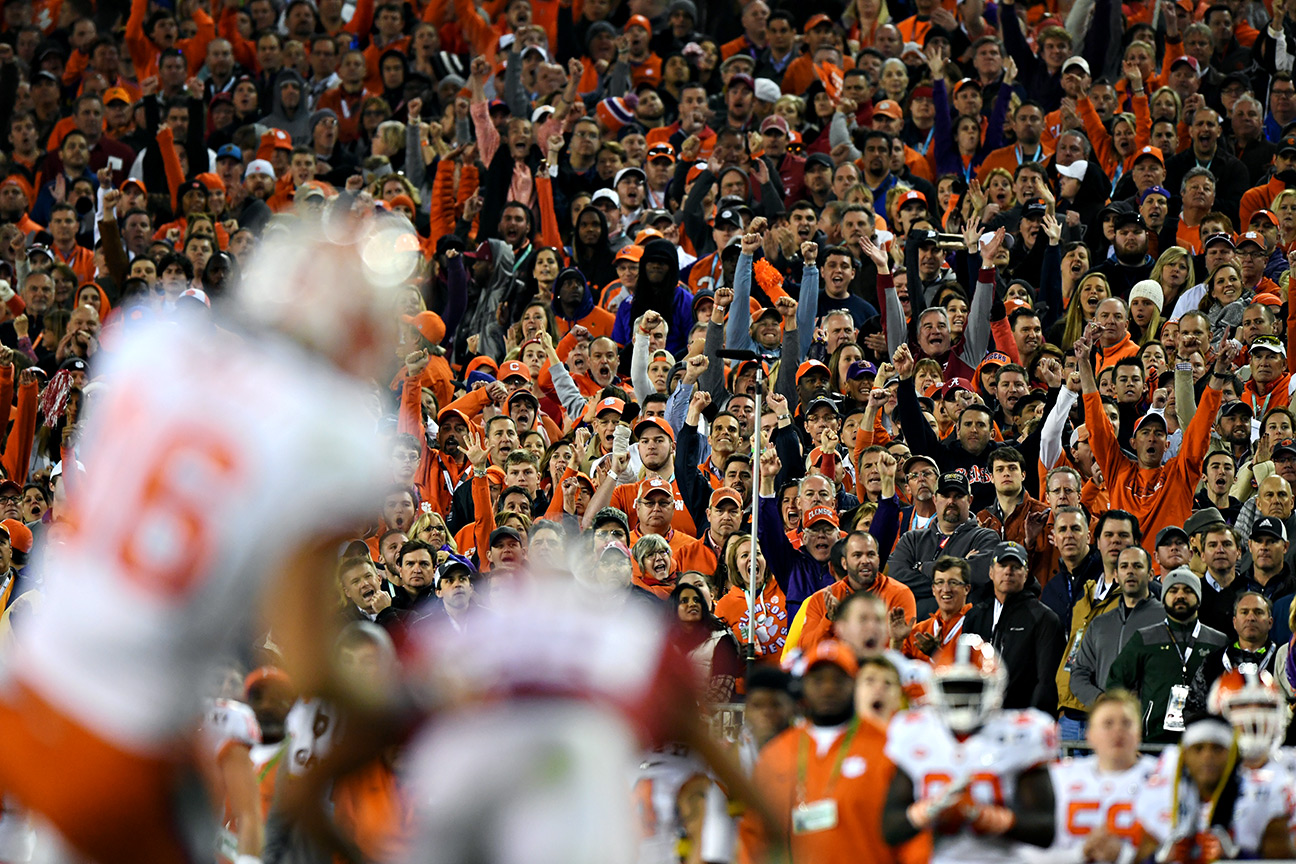 Clemson fans react to Jordan Leggett's catch at the Alabama 13-yard line that put the Tigers in the red zone for the first time. 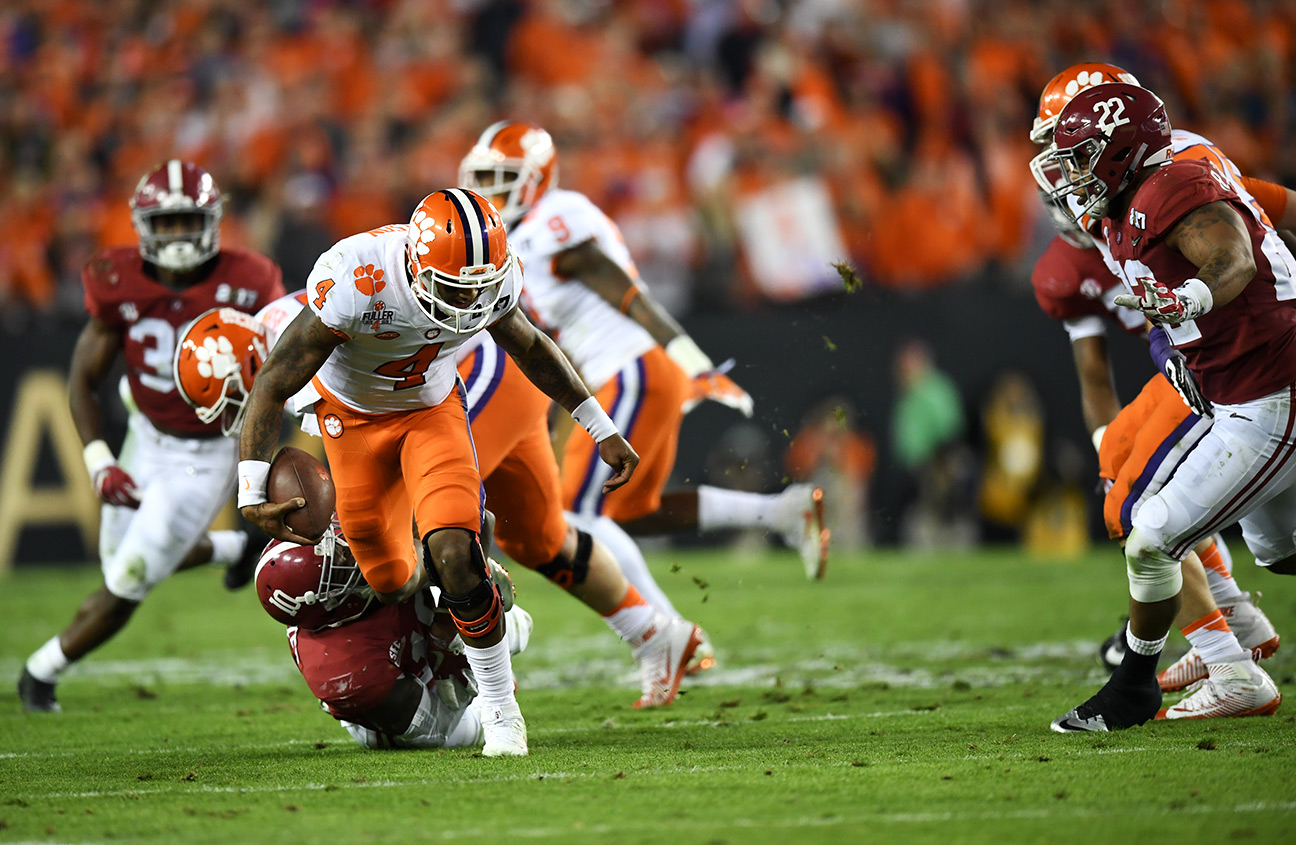 Reuben Foster and Anderson sack Watson for a loss of 8 yards to bring up fourth down during the second quarter. The Tide defense, which leads the country in sacks this season, would finish with four in the game. 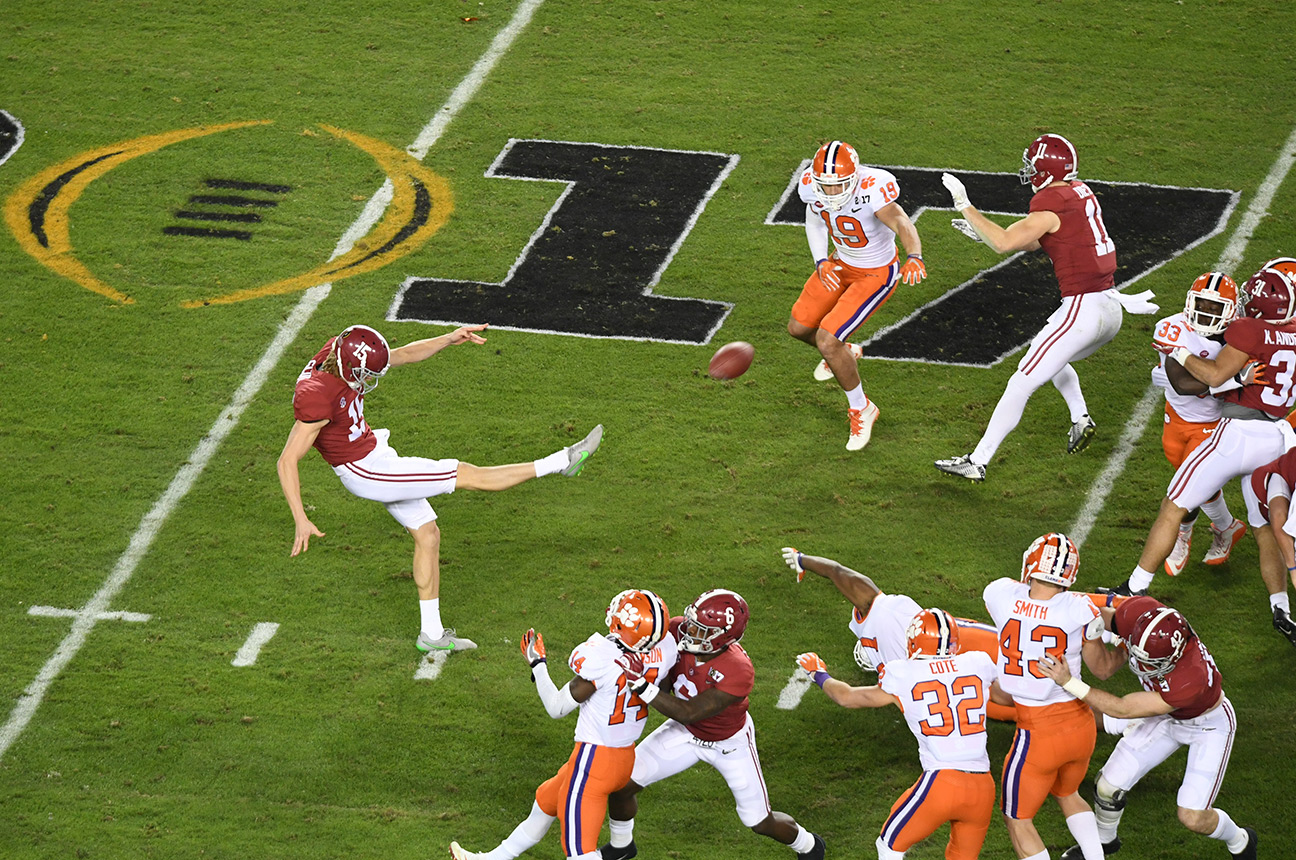 Alabama punter JK Scott unleashes a 57-yard punt, which is fair caught by Clemson returner Artavis Scott at the Tigers' 5-yard line. Scott's 10 punts in the game are the most ever for a Crimson Tide punter since Nick Saban took over as head coach. 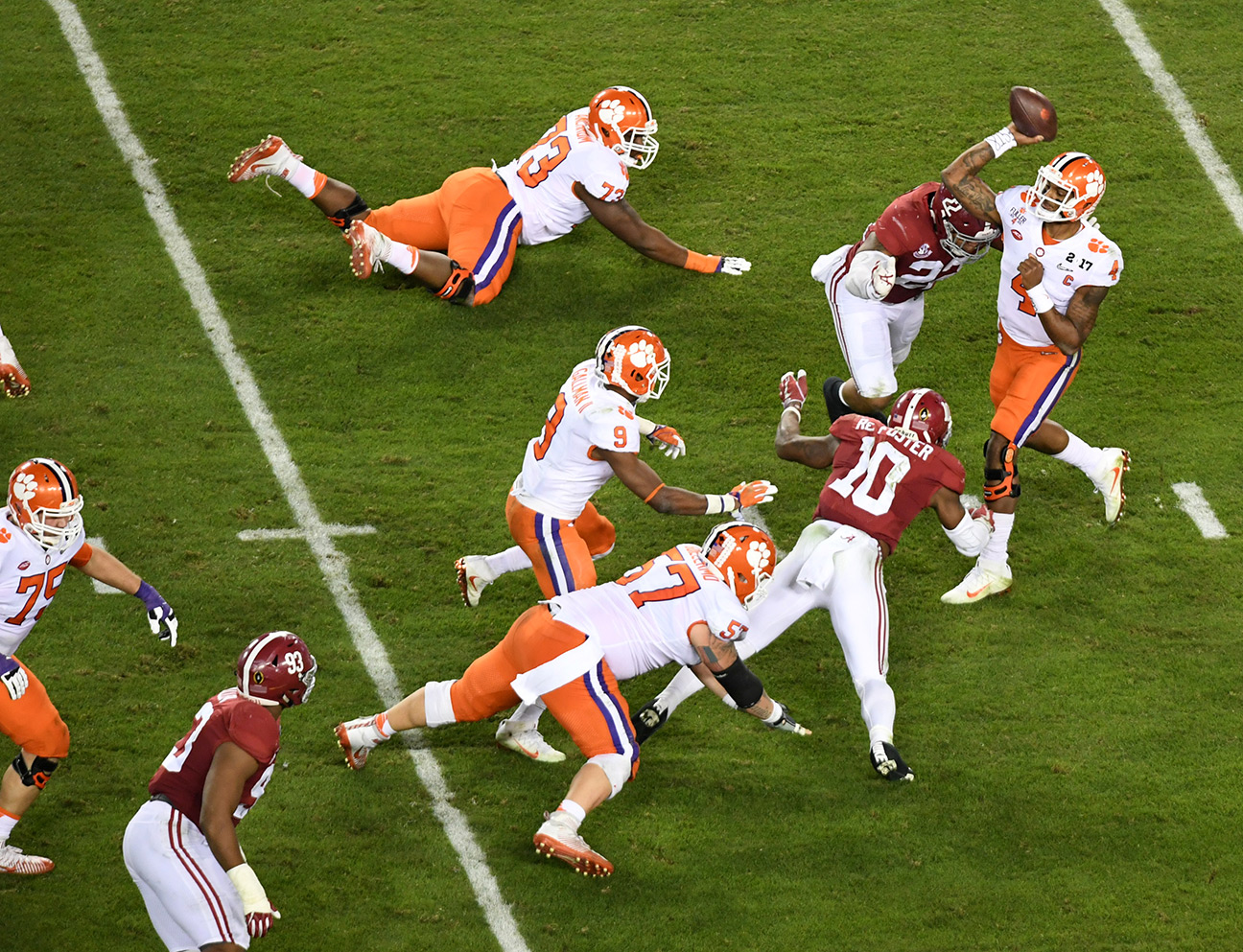 Watson gets a pass off just before Anderson and Foster get to him during the second quarter. 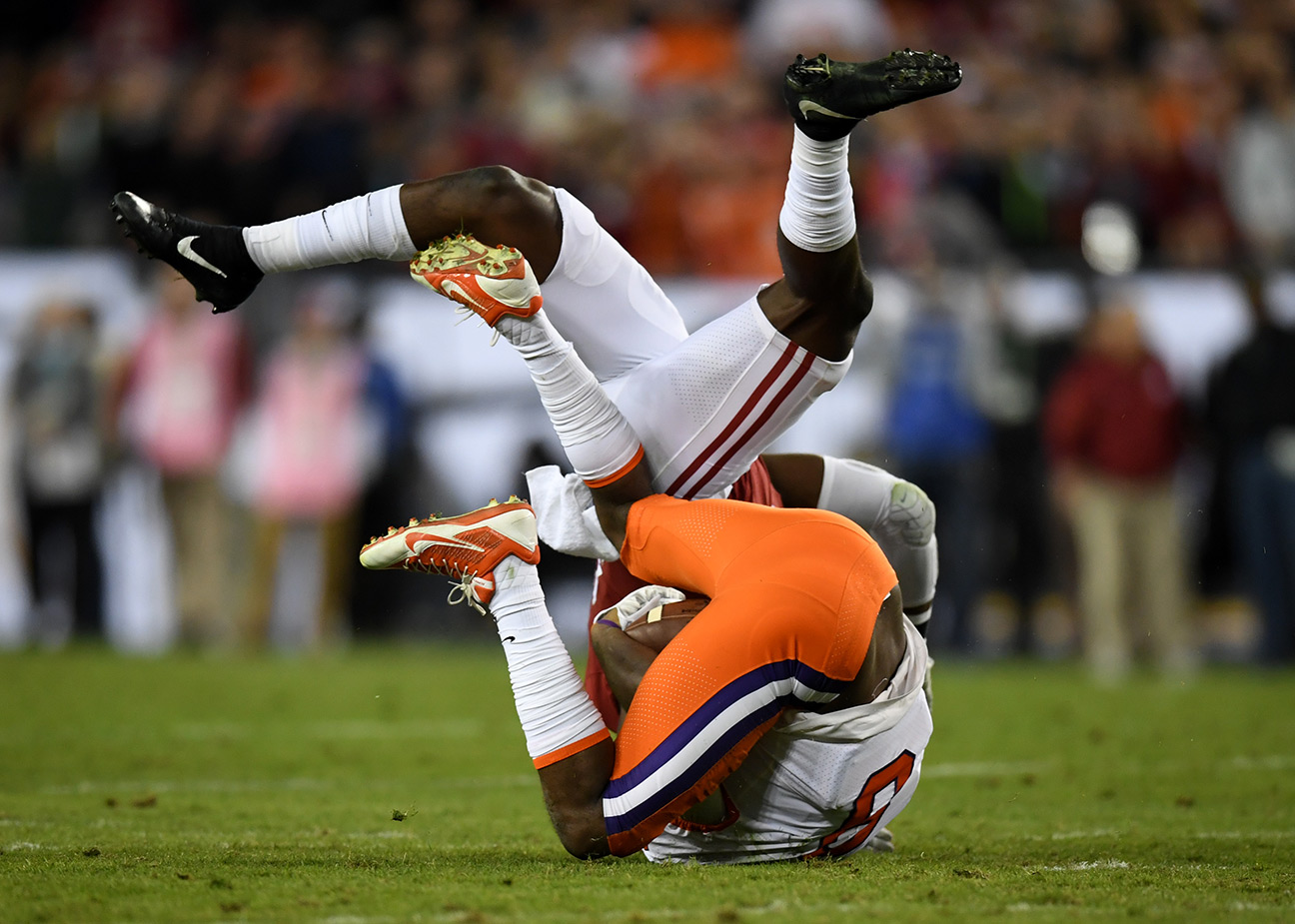 Clemson wide receiver Deon Cain holds onto the ball for a 14-yard catch over Alabama defensive back Ronnie Harrison during the third quarter. 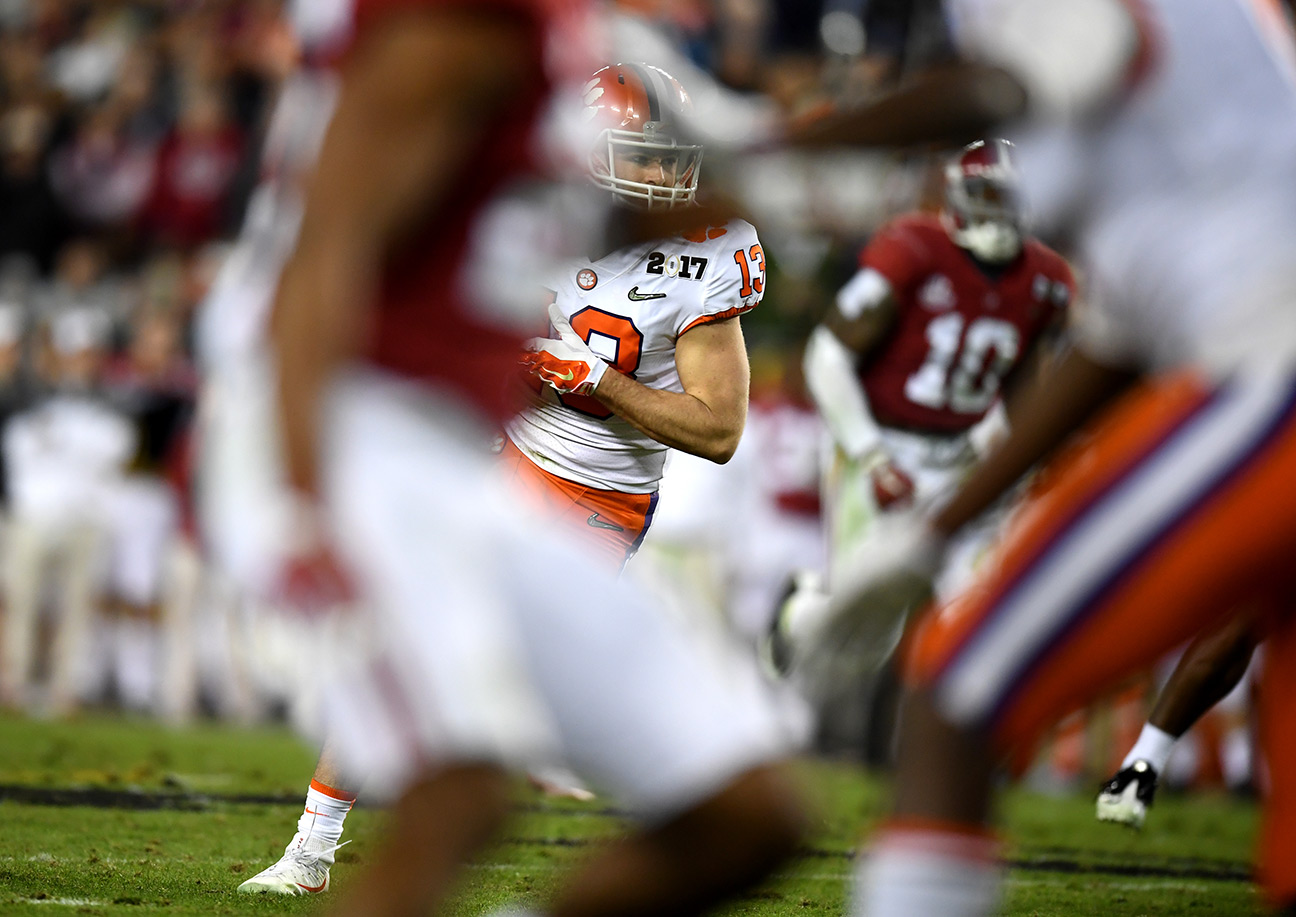 Renfrow looks to find space as he breaks for the end zone on this 24-yard touchdown catch. 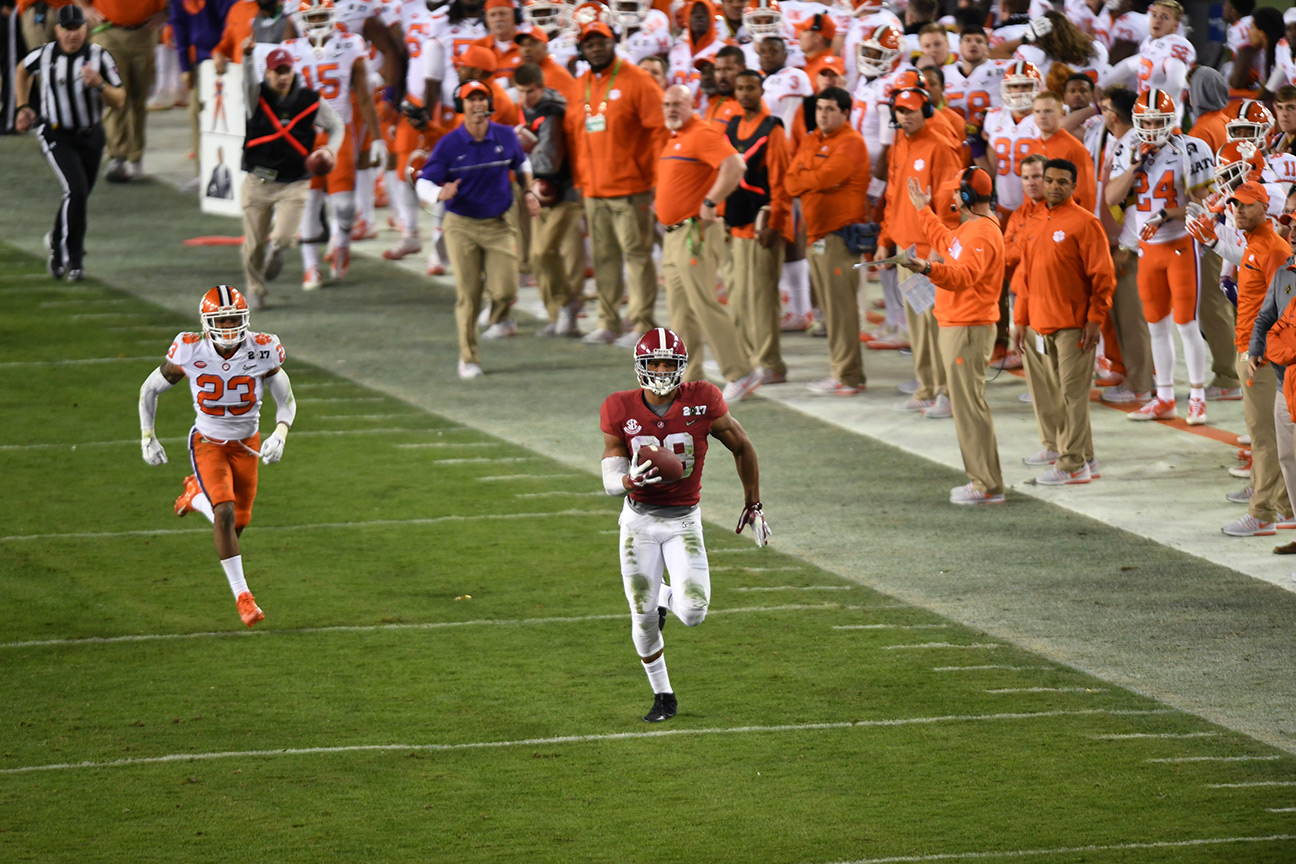 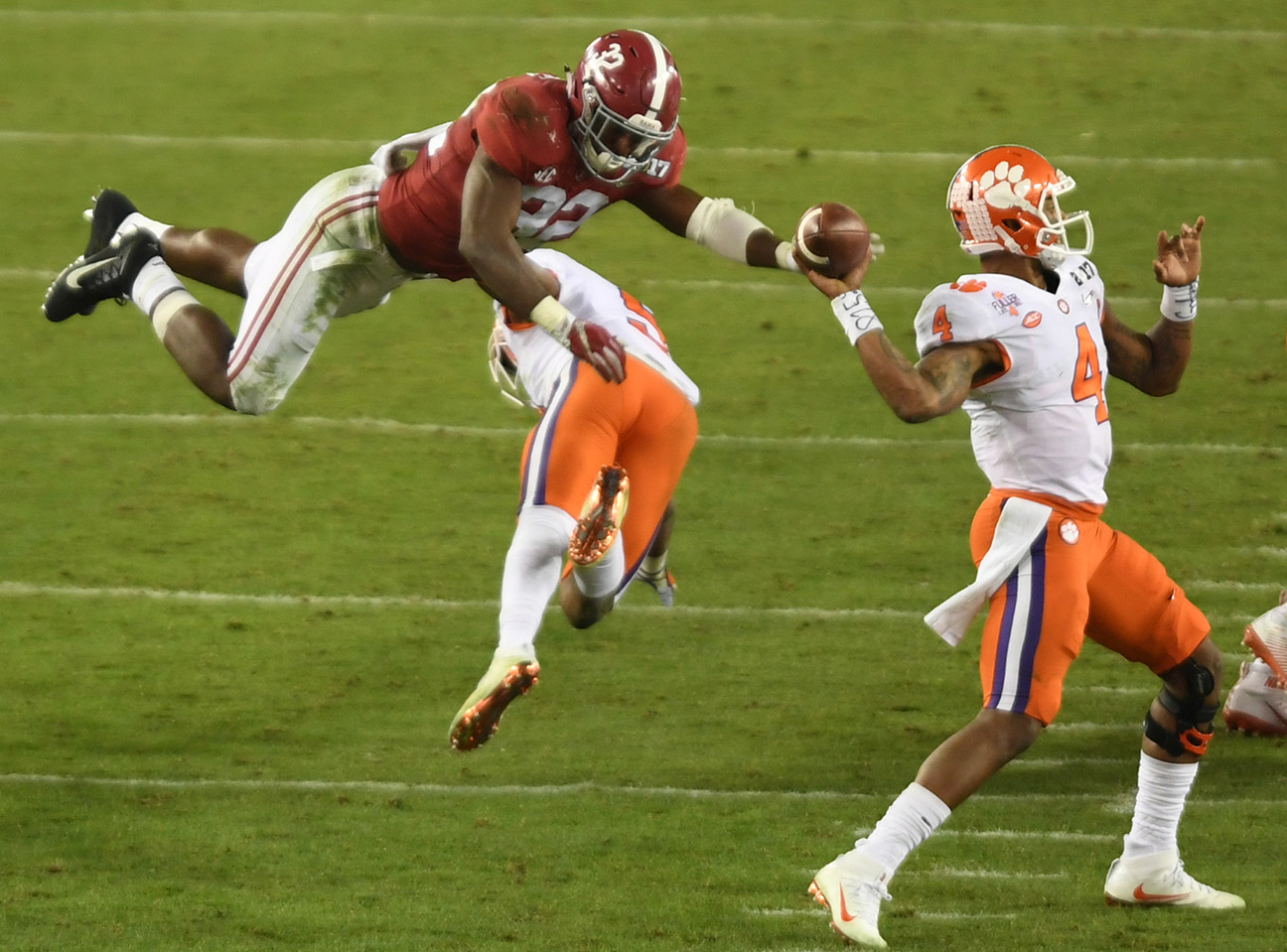 Watson gets a pass off as a diving Evans reaches out for the ball during the fourth quarter. 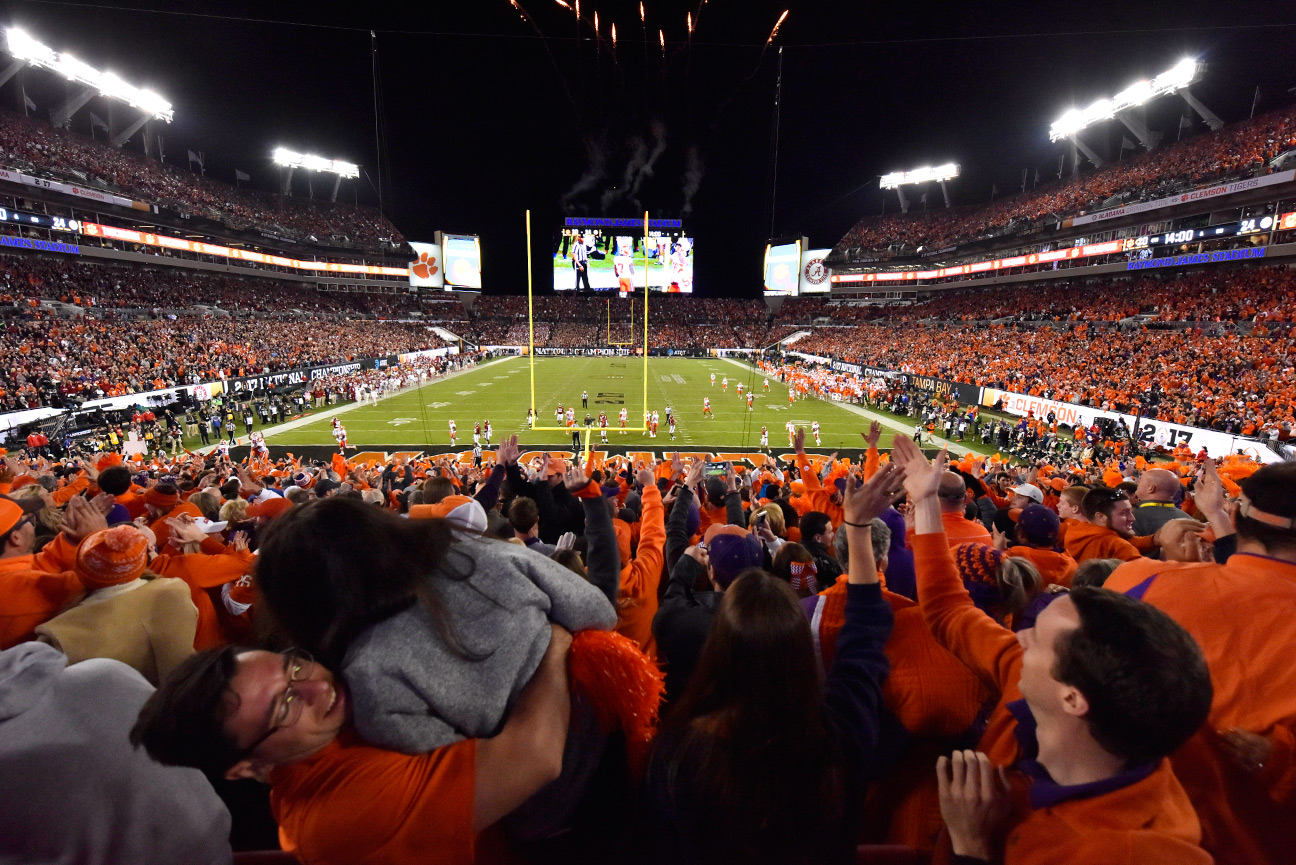 Tigers fans react to a 4-yard touchdown catch by Mike Williams, bringing the Tigers back within three points at 24-21. 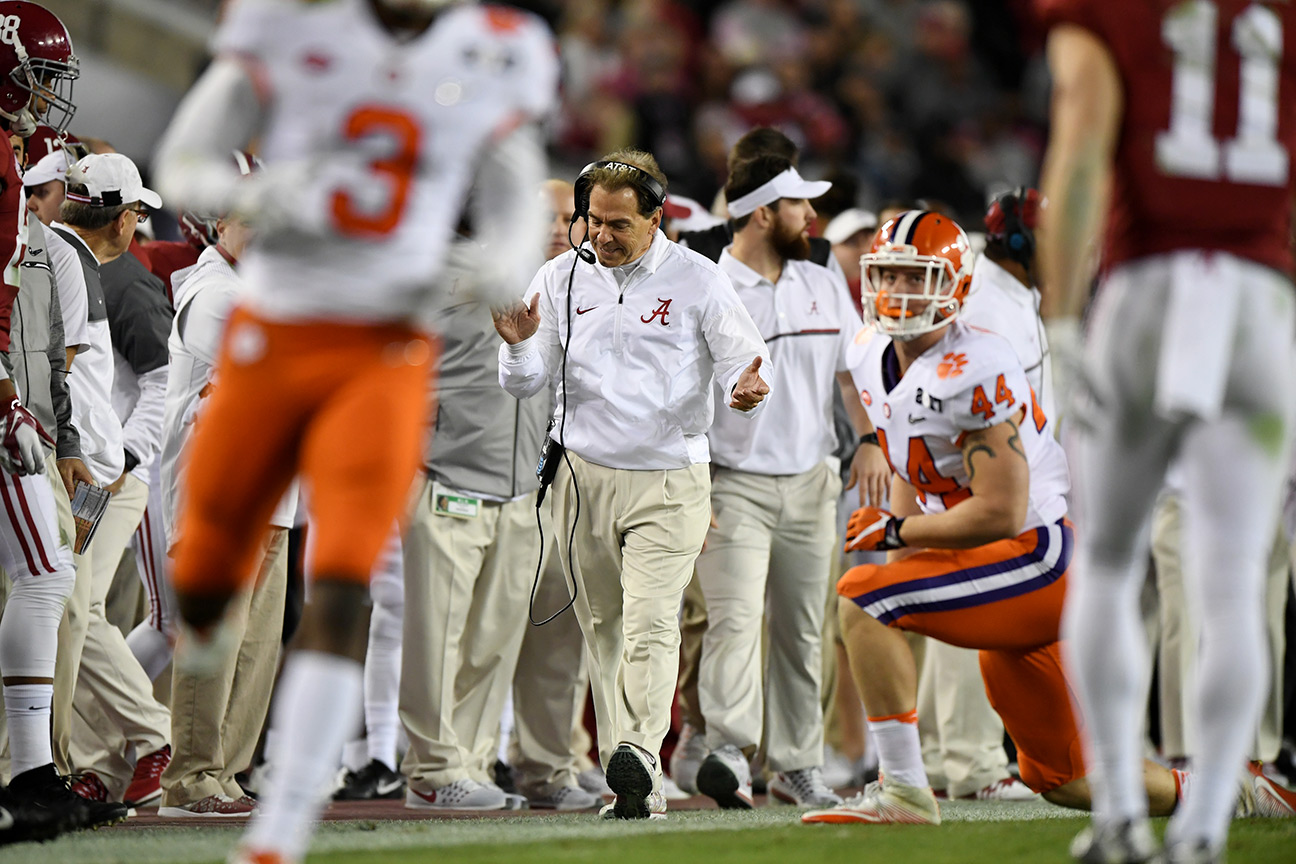 Saban reacts to Watson completing a third-down pass to Renfrow, keeping the Clemson drive alive. Prior to Monday, Saban had never lost a double-digit lead entering the fourth quarter. 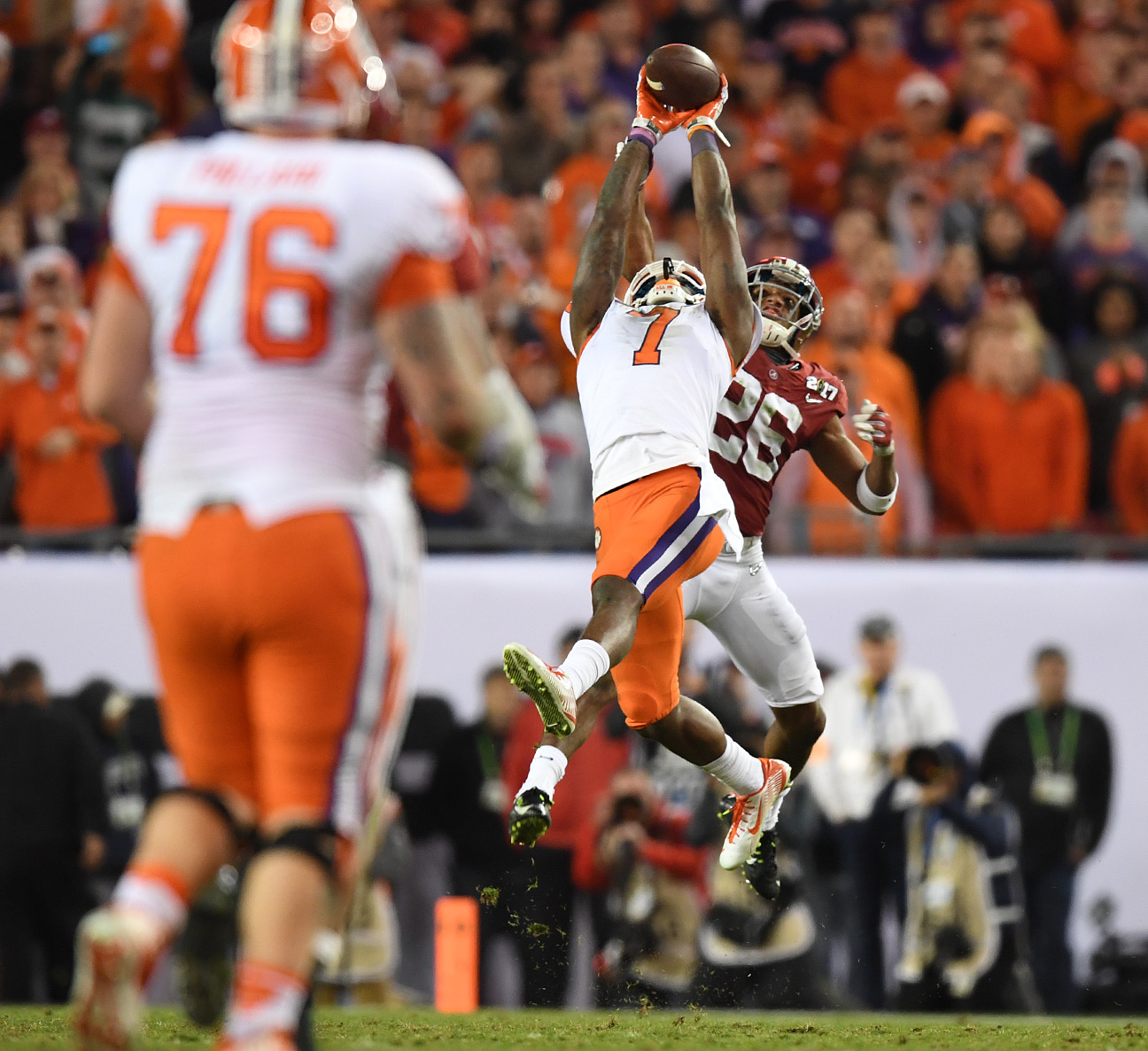 Williams floats in the air to grab the ball as Alabama defensive back Marlon Humphrey tries to knock it away. A subsequent unsportsmanlike conduct penalty against Alabama sets the Tigers up at the Crimson Tide 16-yard line. 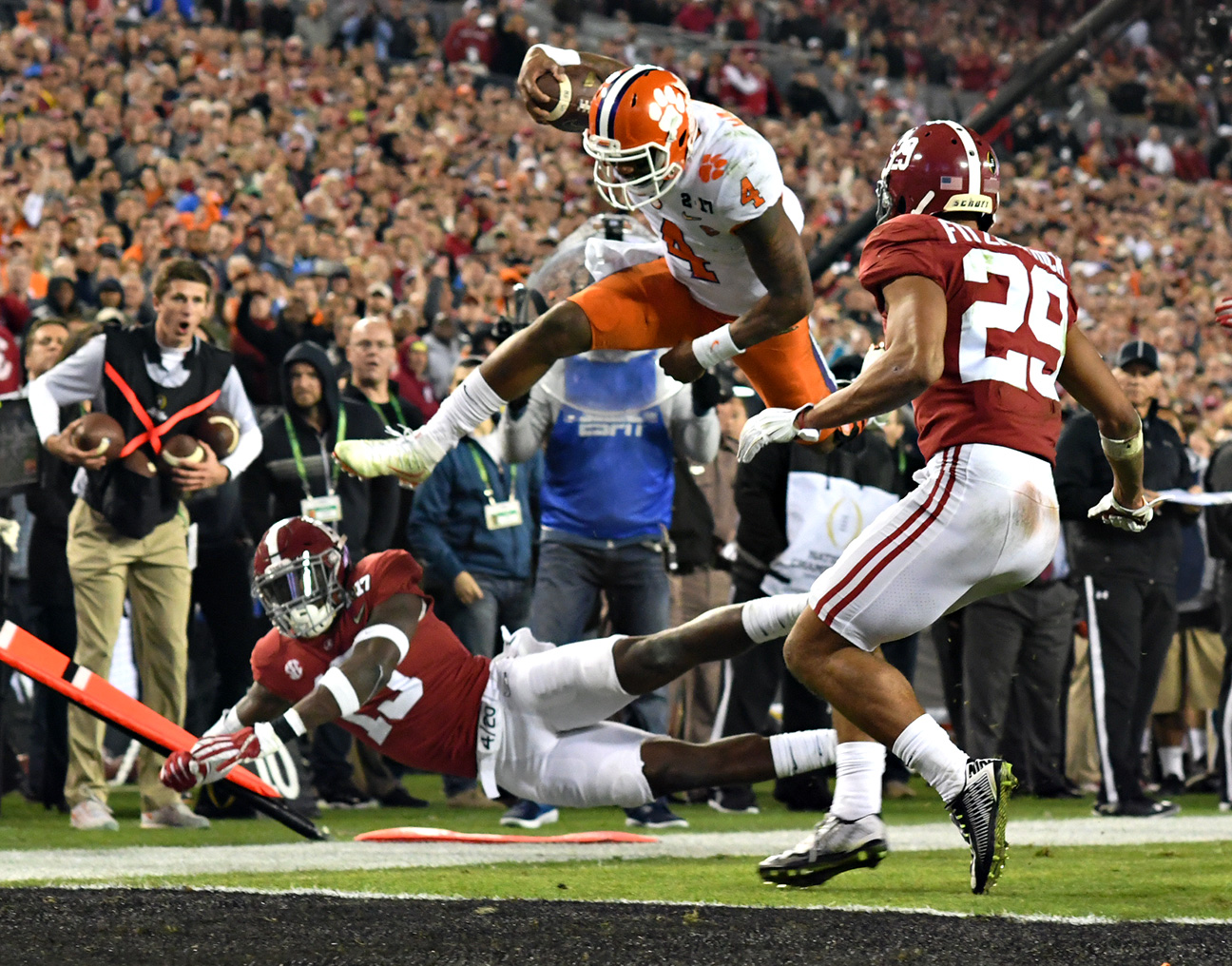 Watson leaps over Harrison toward the end zone. He is marked out at the 4-yard line. 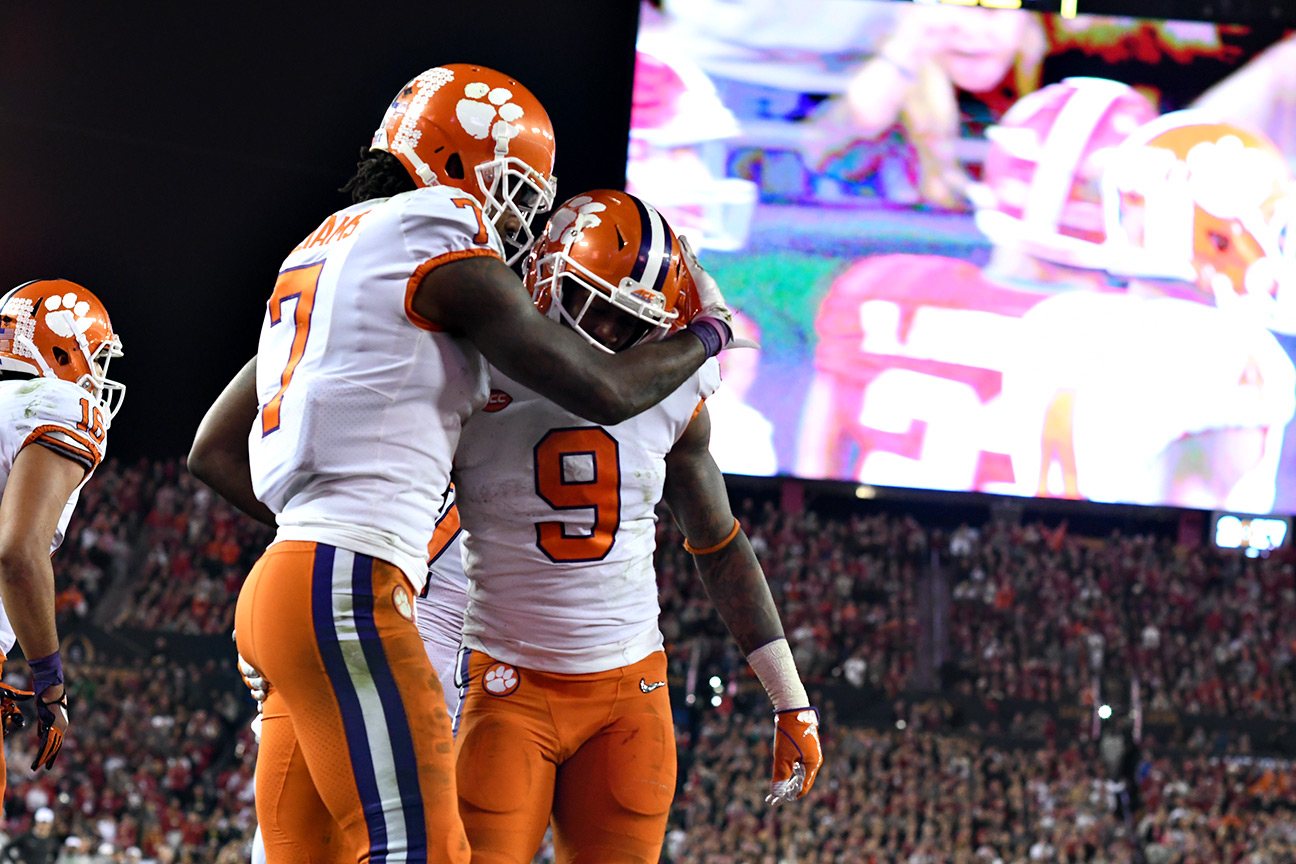 Gallman celebrates with Williams after Williams' 4-yard touchdown catch in the fourth quarter. 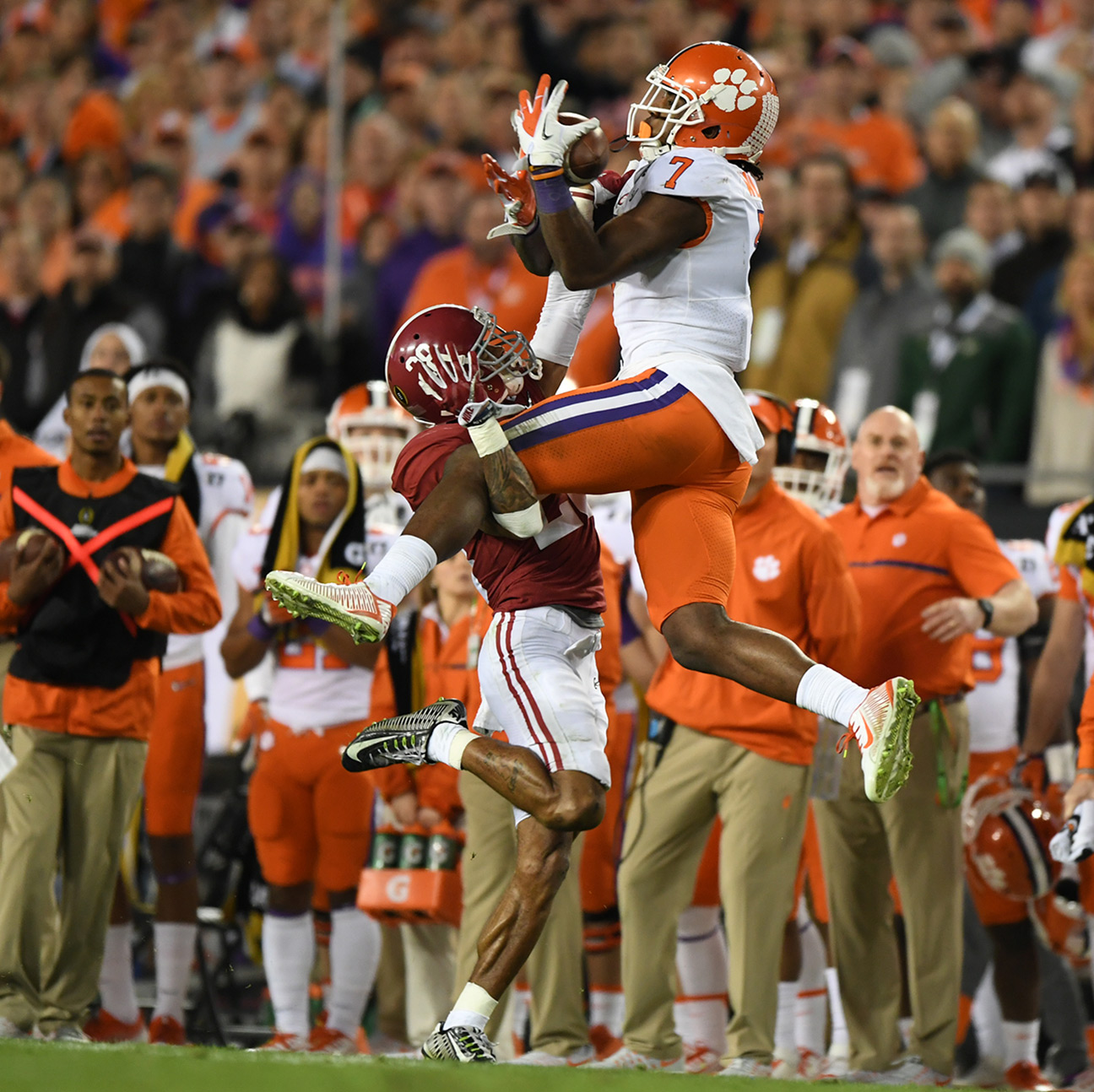 Williams goes up for a catch of 24 yards over Averett on the final drive of the game. Williams, who sat out much of last season with a broken neck, finishes the game with eight catches for 94 yards. 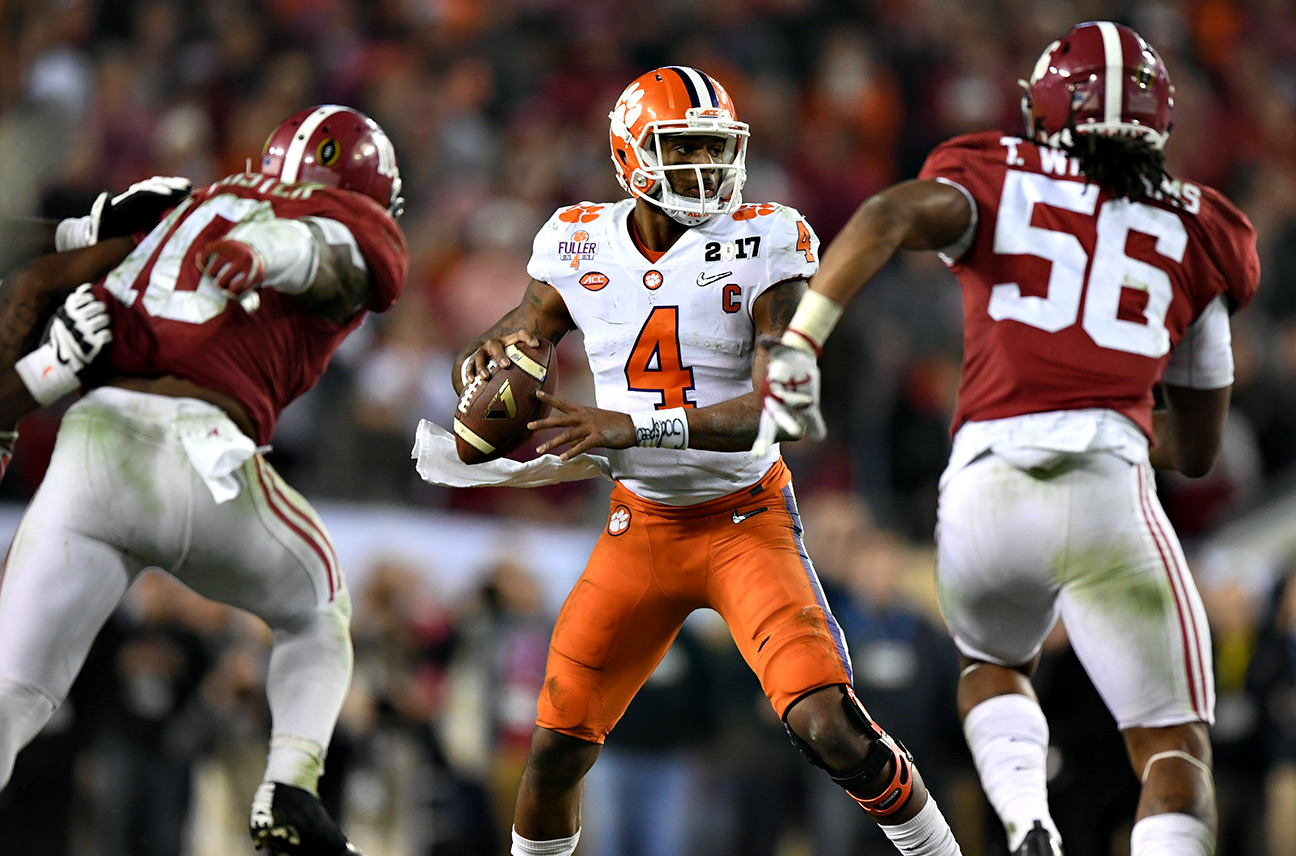 Watson readies himself to throw under the combined pressure of the Alabama defensive front seven breathing down his neck and time running out in the fourth quarter. 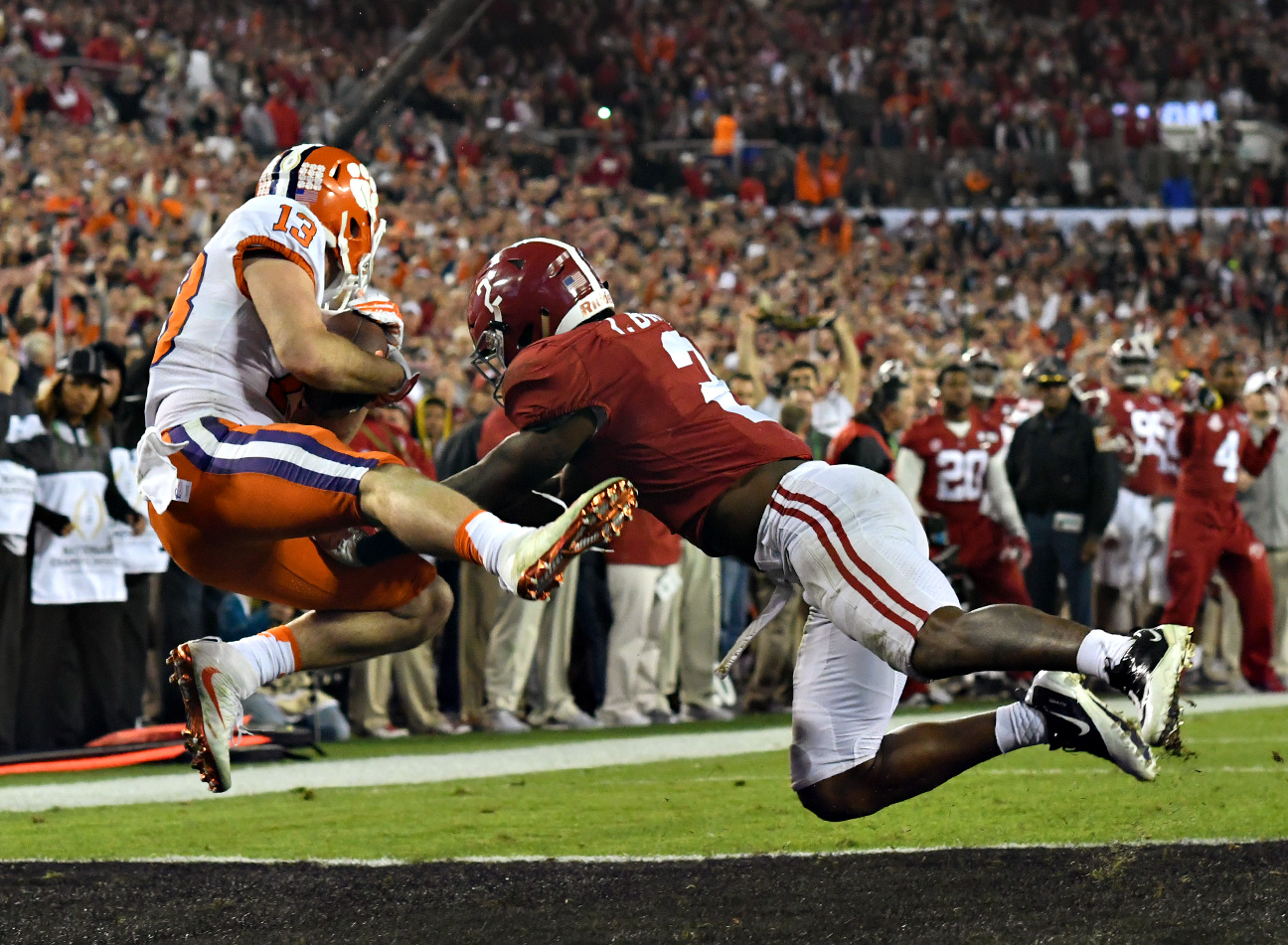 Renfrow catches the game-winning touchdown pass past the outstretched arms of Brown. Renfrow, a former walk-on, has 11 career receiving touchdowns, with four coming in national championship games against Alabama. 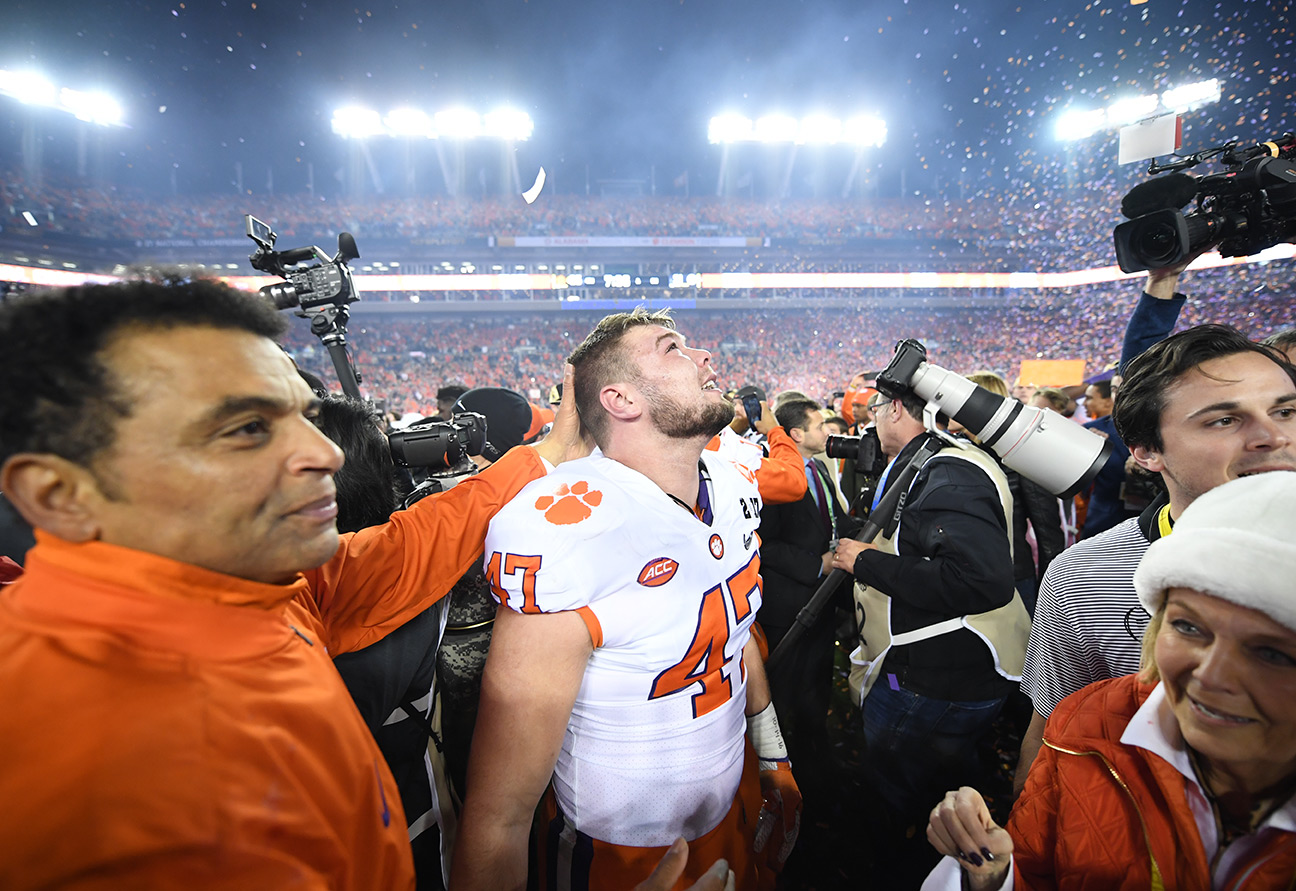 Clemson linebacker James Skalski is overcome with emotion after the Tigers defeat the Crimson Tide 35-31. The win marks the Tigers' first national championship since 1981. 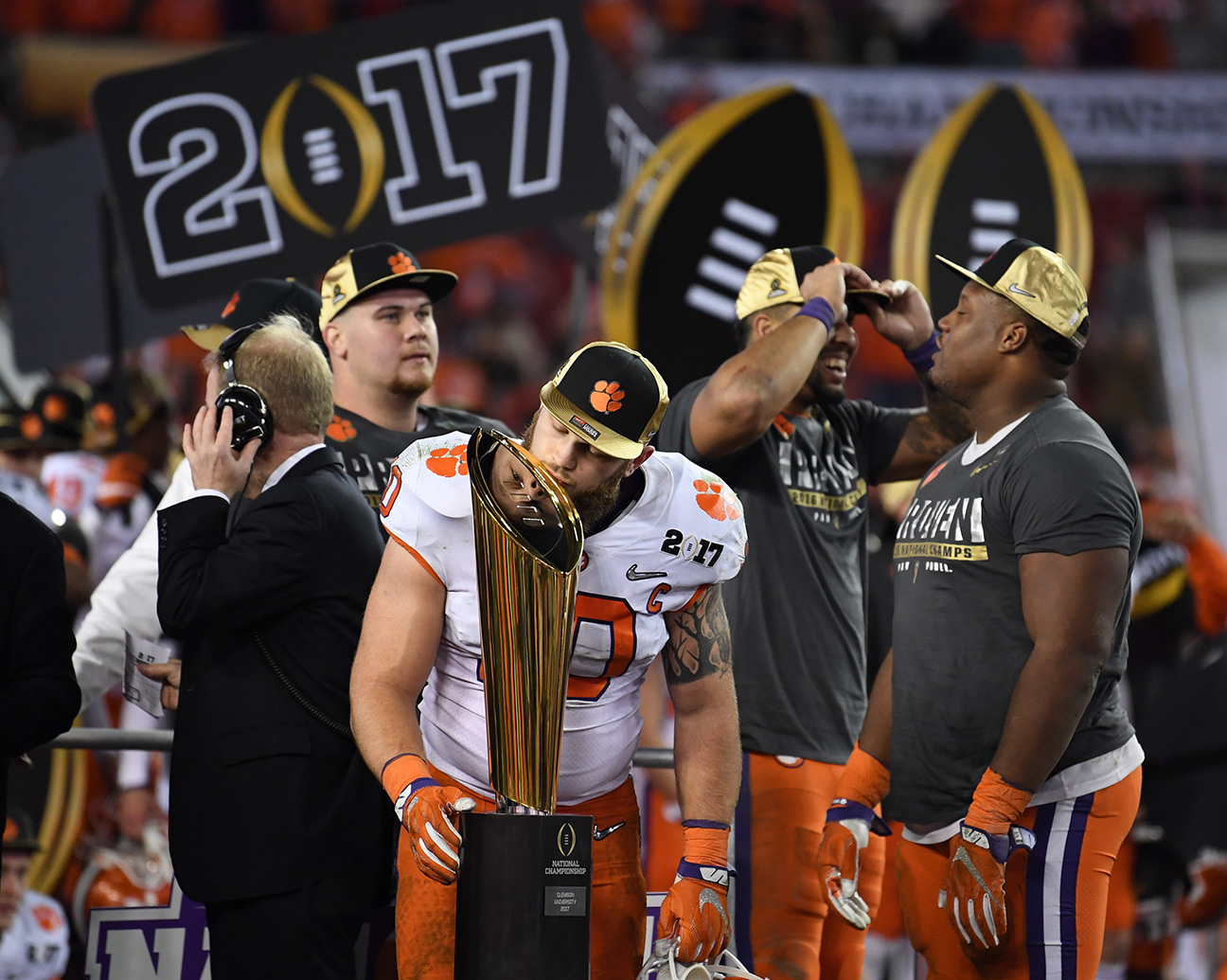 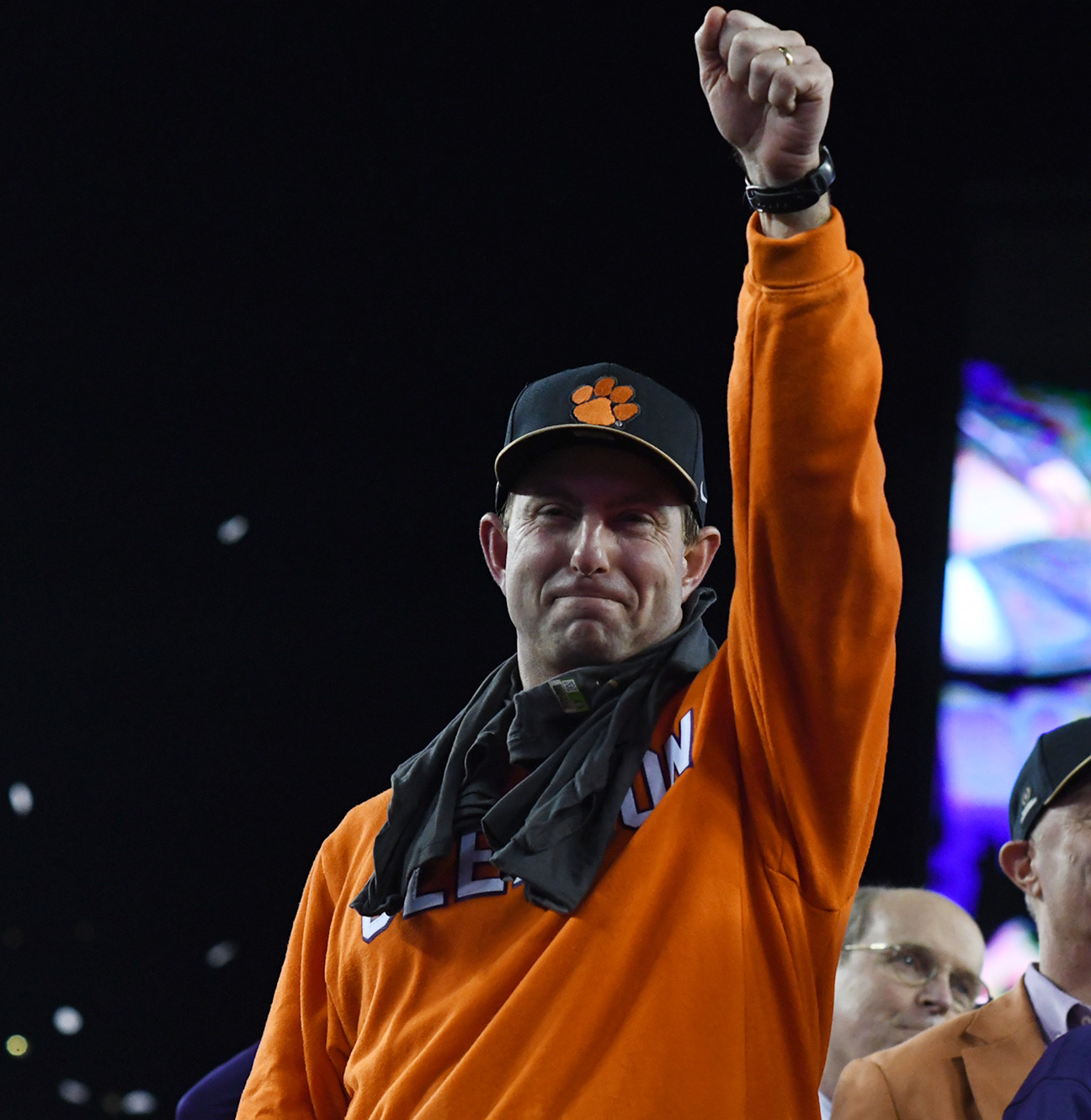 Swinney celebrates on stage after defeating his alma mater, Alabama. 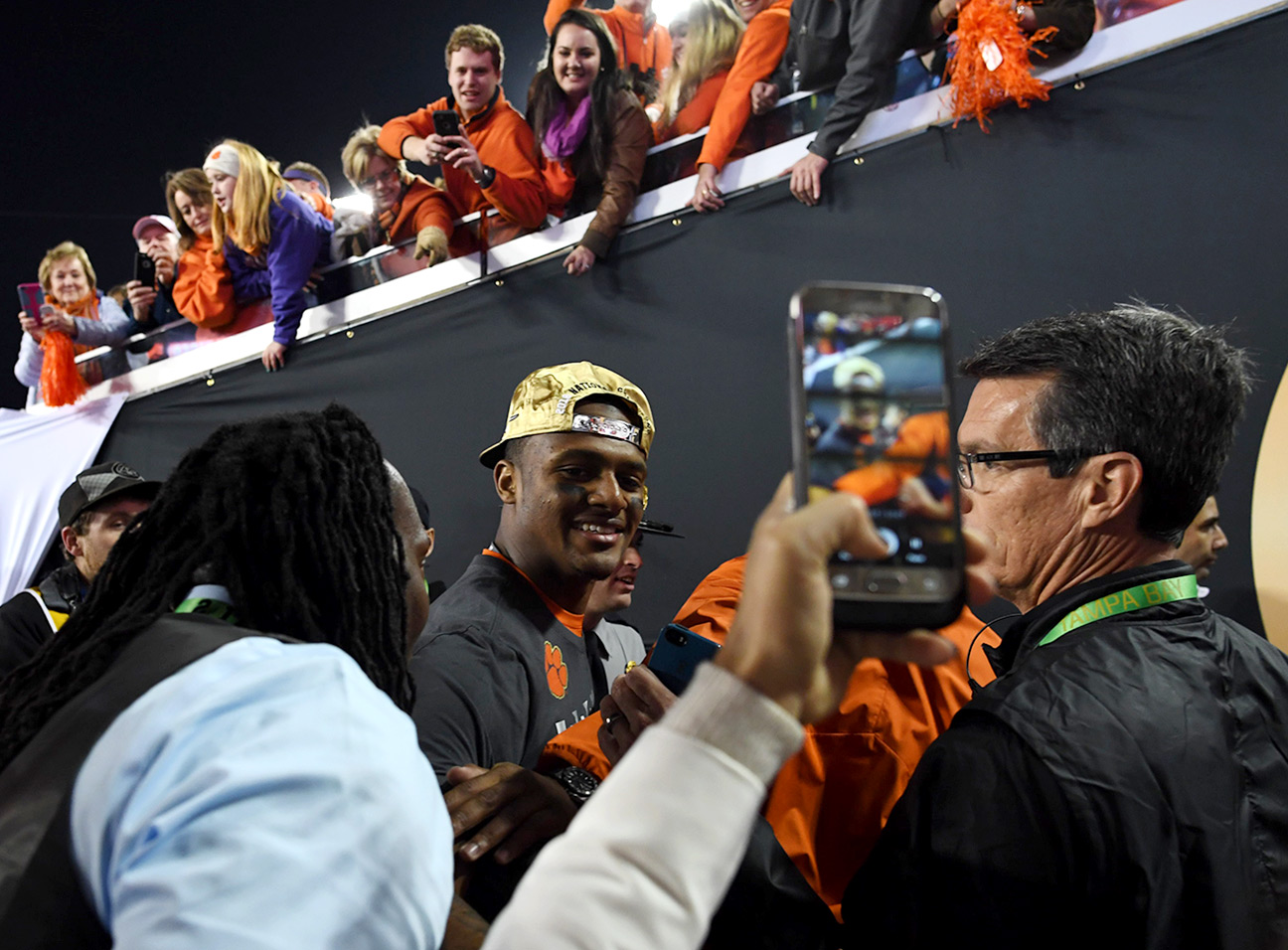 Watson walks off the field through a crowd of fans, media and security for the last time in a Tigers uniform after defeating Alabama and earning offensive MVP honors. 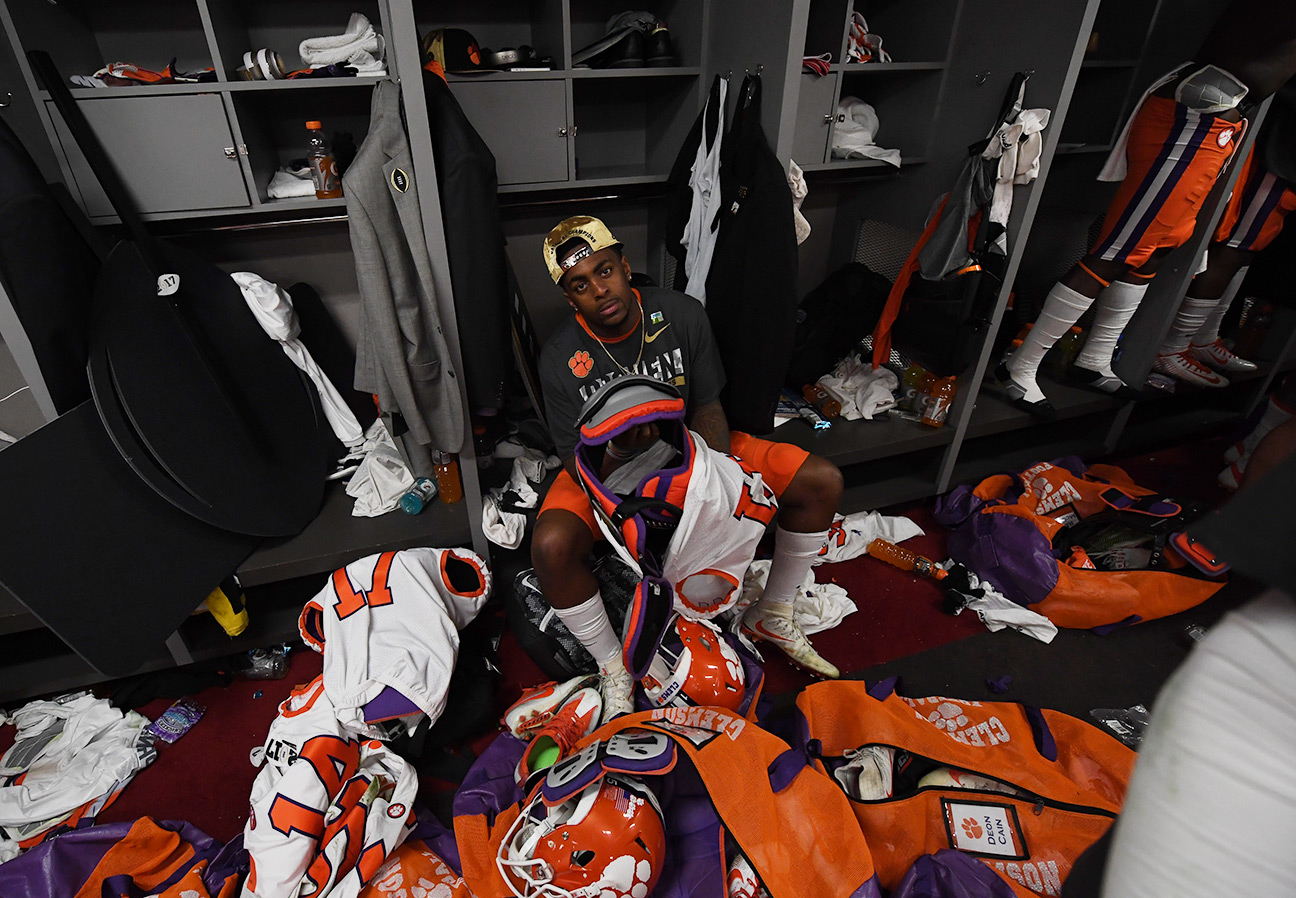 Isaiah Simmons packs up his gear in the locker room amid all the celebration.