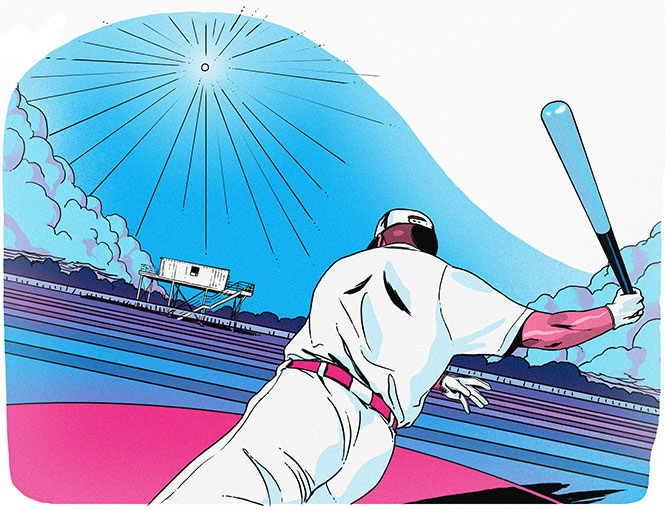 In the beginning
Schwarber joins the pantheon of heroes

Gather close, dear reader, for the tale of Kyle Schwarber, he of the giant bat and mighty homers that echo still through the Midwestern night. It is a story of a man and his home runs that generations will know.

Kyle Schwarber hit his first dinger at the tender age of 10. It was the most remarkable of shots: a grand slam! In a tournament! On Father's Day! In Cooperstown!

A mere six years later, as a stocky sophomore at Middletown High in Ohio, Kyle Schwarber wowed the faithful again, launching a line-drive missile -- "It couldn't have gone more than 20 feet in the air!" marvels Jason Cave, his high school coach -- that hurtled over the fence, smashing a window of a Ford Aerostar. Those in the stands on that April evening still recall the sound of shattered glass as young Kyle Schwarber rounded the bases on his walk-off game winner.

But neither of these feats would compare to the home run Kyle Schwarber launched the very next year, sealing his name in south Ohio lore.

On an otherwise unremarkable day in the spring of 2010, No. 12, Kyle Schwarber, stood in the dirt, a fireplug at the plate, 6 feet tall and growing into his 235-pound frame, and sent a ball sailing into the Middletown sky. On it traveled, up, up, up, over the right-field fence, beyond Forest Hills Drive and past the press box that looks onto the high school's adjoining soccer field. Legend holds that, before Kyle Schwarber, only one other player had crushed a ball beyond that press box: his childhood idol, Ken Griffey Jr., from nearby Moeller High.

And so today, and for all the days to come, Kyle Schwarber and The Kid stand alone.

A giant comes of age
Schwarber smites his doubters

On May 13, 2014, a muscle-bound Kyle Schwarber, now a junior at Indiana University, joined his teammates for batting practice in Louisville's Jim Patterson Stadium. Up walked his coach, Tracy Smith, who planted a seed. "You know," Smith said, "A.J. Reed hit a home run off the batter's eye in center field one time."

Kyle Schwarber knew he had but one choice: He must do A.J. Reed, University of Kentucky baseball star, one better. But as the Hoosiers' game against the Cardinals wore on, Kyle Schwarber was stymied, going hitless into the ninth. And as the great batsman stumbled, rumors swirled that one very important Chicagoan watched from the stands.

This was not Mr. Epstein's first Kyle Schwarber viewing. Three months earlier, a Pac-12 tournament brought the Hoosiers to Arizona. There, Mr. Epstein met with Kyle Schwarber personally. Can he be a big league catcher? Mr. Epstein wondered. Scouts had deemed him average there at best, a liability at worst. Could he hold his post in left field? There, scouts called him "unplayable."

Now, in Louisville, Mr. Epstein took in the final act of another Kyle Schwarber show. In the top of the ninth, Kyle Schwarber stood at the plate, the count 2-and-1, and whaled on the pitch. It shot high in the air and traveled far -- so far. His home run did not hit the batter's eye -- no, it cleared it outright! "And that screen was at least 40 feet tall!" exclaims Hart. After Kyle Schwarber touched home plate, Mr. Epstein rose and left the ballpark. He had seen all he needed to see. "I speculate to this day," Hart says: "Was that the swing that got Kyle Schwarber drafted No. 4?" 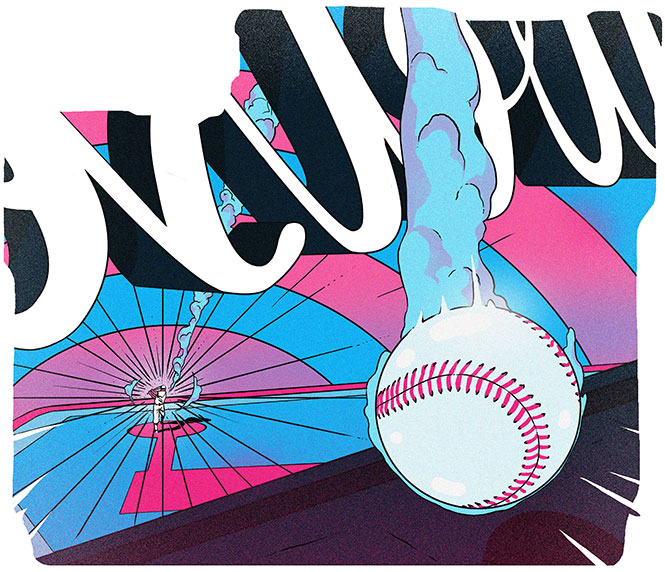 The legend builds
Schwarber goes to the moon

By the fall of the following year, Kyle Schwarber's new Cubs teammates agreed: "The ball just sounds different off his bat," third baseman Kris Bryant says now. Yes, Kyle Schwarber had capital-P Pop! By Oct. 13, 2015 -- the day Kyle Schwarber, Bryant and the Cubs met the evil Cardinals at Wrigley Field in Game 4 of the National League Division Series -- Bryant had heard Kyle Schwarber's mighty bat connect on 18 home runs. And all that in just 73 big league games! Lo and behold, that night in Chicago, in the bottom of the seventh, with the Cubs up 5-4 and six outs from clinching the series, our hero turned viciously on a fastball over the plate. So hard was it hit, so majestic its arc, that both the television cameras and Kyle Schwarber's teammates lost sight of the ball. It seemed Kyle Schwarber had hit it to the moon! "Mercy!" gasped TBS commentator Joe Simpson.

"The sound was louder than the crowd," Bryant says.

"I have not seen a home run like that before," marvels Cubs historian Grant DePorter.

Where, exactly, did Kyle Schwarber's ball touch down? On Sheffield Avenue? In a tree beyond that? Everyone wanted to know! And so the great ball hunt of 2015 was on! While Kyle Schwarber and the Cubs toasted their series win, a search party convened at Tom Ricketts' house. The Cubs owner's home sits directly behind Wrigley's scoreboard, and so Mr. Ricketts' guests took to the balcony. They searched in waves, of six, seven, eight people. They hit the street. In the end, it was neither Mr. Ricketts nor his guests who identified the orb's landing spot. It was a ticket holder who snapped a photo of the right-field scoreboard, where a round white object shaped suspiciously like a baseball rested just beneath the Budweiser sign. Today the ball sits there still, encased in plexiglass, a shrine to the giant batsman and the ball that eventually fell to earth.

Kyle Schwarber has always been more than a basher of baseballs. One day in February 2016 in Mesa, Arizona, Kyle Schwarber, Kris Bryant and Anthony Rizzo filed out for late-morning batting practice. With about 100 fans huddled around the green metal fencing, the trio took their pitches. As was customary, Kyle Schwarber sent his missiles into the desert sky, and at one point an unmistakable crash punctuated the morning. You hit a car! his teammates yelled. Longtime season-ticket holder Peter Gesler peered toward the spot, some 300 feet away, where he had parked his electric blue Mazda CX-5. And Gesler, well, he knew before he knew! He walked back to find a crowd forming around a decidedly smashed windshield on, yes, an electric blue Mazda CX-5.

"Our car is now famous," Gesler exclaimed on Instagram. The photo, like the giant batsman's BP home run, took off: 50 likes at first, then 100, then 3,000. Eventually, Kyle Schwarber himself saw the image -- and when life handed our hero shattered glass, well, he had the foresight to notify a glass-repair company. Hey @safelite can you help this guy out? Kyle Schwarber tweeted.

It did. Safelite replaced Gesler's windshield at the ballpark two days after the harrowing ordeal, with Kyle Schwarber looking on.

Go Cubs! Kyle Schwarber signed the windshield, transforming the splintered glass into an instant collectible. It now resides in the Chicago Sports Museum. 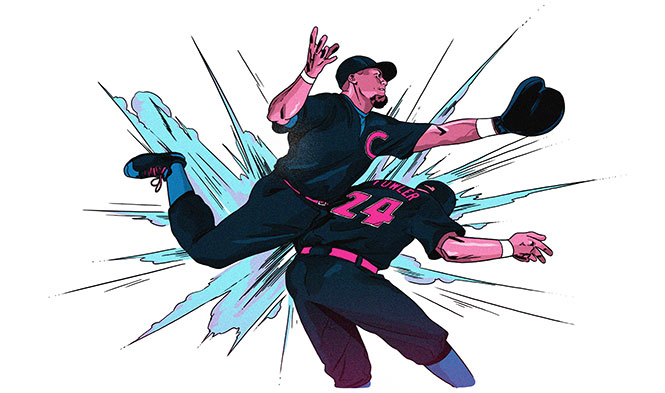 The Earth shakes
Schwarber has a great fall

But lo, though Kyle Schwarber showed kindness that spring, the spring did not reciprocate! For in the second inning of his second game of his second MLB season -- April 7, 2016 -- Kyle Schwarber, playing left field, barreled toward center, tracking a ball hit deep in Arizona's Chase Field. Racing toward him, hunting the same ball, was center fielder Dexter Fowler. Fowler tried to dive low and avoid Kyle Schwarber, but it was simply too late -- the collision shook the stadium. Kyle Schwarber collapsed in the dirt, then felt fire course up his ankle. He pounded the ground with his mighty right foot, once, twice, three times. He dragged his body forward on the warning track, stopped, then pounded the ground again. Kyle Schwarber's team met him there, one by one. Joe Maddon. Ben Zobrist. Addison Russell. Kris Bryant. Anthony Rizzo. They were meant to end Chicago's 108-year championship drought with one another. "That's what hurt the most," Kyle Schwarber says. "I knew that we had a special team, and I wasn't going to be out there helping the guys." The fire in his ankle gave way to swelling in his left knee, where doctors later found a torn ACL and LCL. Doctors told our hero he'd see the field again in spring training of 2017. His 2016 season? Over.

A classic ending
Schwarber makes a most epic return

But Kyle Schwarber, the burly batsman, the mighty competitor, would not wait. He recuperated in Chicago, where his teammates would arrive at the ballpark to find that Kyle Schwarber had beaten them there, sweat pooling on his shirt from the rigor of his rehab workout. A mere 169 games after his 2016 door closed, his doctor cracked it open: "I'm not going to clear you, but I'm not going to say to you that you can't do it." One week later, on the morning of Game 1 of the World Series, having missed an entire season of play, Kyle Schwarber received a text. "Welcome to the World Series," Mr. Epstein said. "That ... that was a waterworks moment," Kyle Schwarber admits. He spent the first six games of the Fall Classic casually defying the odds. Game 1: He crushed a double to right field off All-Star right-hander Corey Kluber. Game 2: He notched his first RBI of the year -- and then his second. So numerous were his feats, dear reader, that we must flash ahead to Game 7, Nov. 2, 2016, and to the rain delay between the ninth and 10th innings. As Cleveland's grounds crew pulled off the tarp, Kyle Schwarber grabbed his bat and walked up to catcher David "Grandpa" Ross. "Hey, Rossy," Kyle Schwarber proclaimed. "I'm gonna back off the plate a little this time. If this guy throws me a cutter in, I'm gonna go deep." What confidence! What bravado! When the rain delay ended and the game resumed, Kyle Schwarber dug in as the leadoff hitter. He saw the second pitch -- cutter in -- and pounced! He didn't go deep like he promised Grandpa Rossy, but he lasered a single into right field to put the go-ahead run on. "If it wasn't for him," swears Kris Bryant, "we wouldn't have won the World Series."

And so concludes the story of our hero, the mightiest Kyle Schwarber in the Midwest! So full of derring-do! And yet to meet a challenge he does not relish!

Illustrations by Paul Lacolley
This story appears in the April 10 MLB Preview issue of ESPN The Magazine.
Read more on Doubletruck