We've combed through the stats to find a story about each team. Is it their style of play? Their dominance of a part of the ground? Or is it the way they share the ball around?

Last week we put all the teams from Adelaide to GWS under the microscope; this week, we look at the key trends and statistics for the rest of the league.

Power Rankings: Which clubs are breaking away from the pack?

Despite the fact the Hawks don't look likely to claim another flag in the near future, they haven't quite moved towards 'playing the kids' as you'd expect from a squad at this point in their cycle. In fact, Hawthorn have fielded several sides this year that were older than any Hawks teams that took the field in 2013 or 2014. The Hawks are right up there among the oldest playing groups in the league, alongside the Cats and the Eagles. Unlike those sides, September is not on the cards for the Hawks. 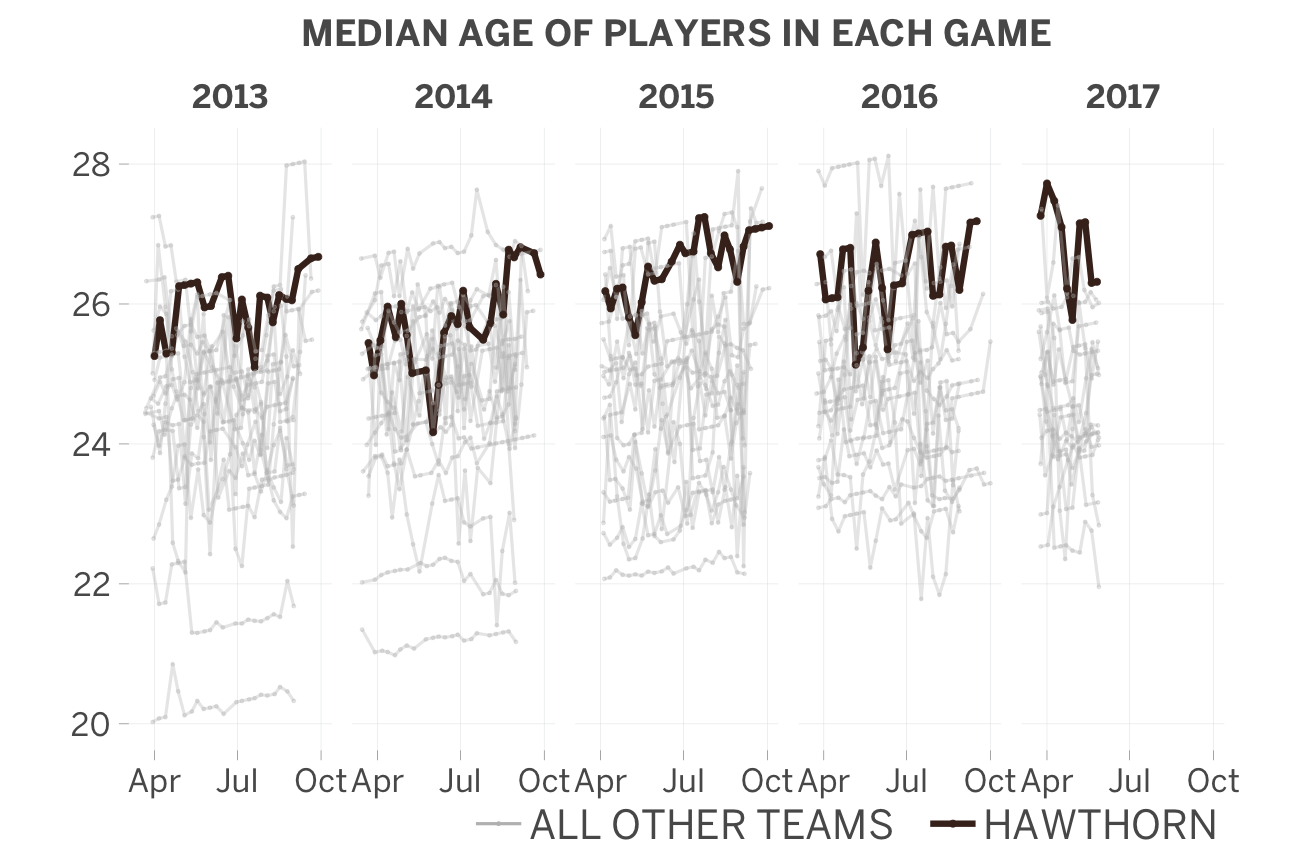 Alastair Clarkson has made a fool of many people who have made the mistake of questioning his judgement. Still, we can't help but wonder if it might be in the club's interest to start playing a few more youngsters sooner rather than later.

MELBOURNE - NO HIT OUTS, NO WORRIES

Back in 2015, Max Gawn played in half of Melbourne's games. In the 11 matches with Gawn on the field, the Dees nearly broke even on clearances, averaging 0.6 clearances less than their opponents. But in the 11 games without Gawn, the Demons lost the clearance count by an average of 6.6 per game.

This year, the Demons have closed the gap in their clearance performance with and without Gawn. They've averaged 3.3 clearances more than their opponents in the three games in which Gawn took to the field, and 3.4 net clearances in games without the big guy. The Demons have managed to slightly improve on their clearance counts from last year, despite being without arguably the league's best tap man. 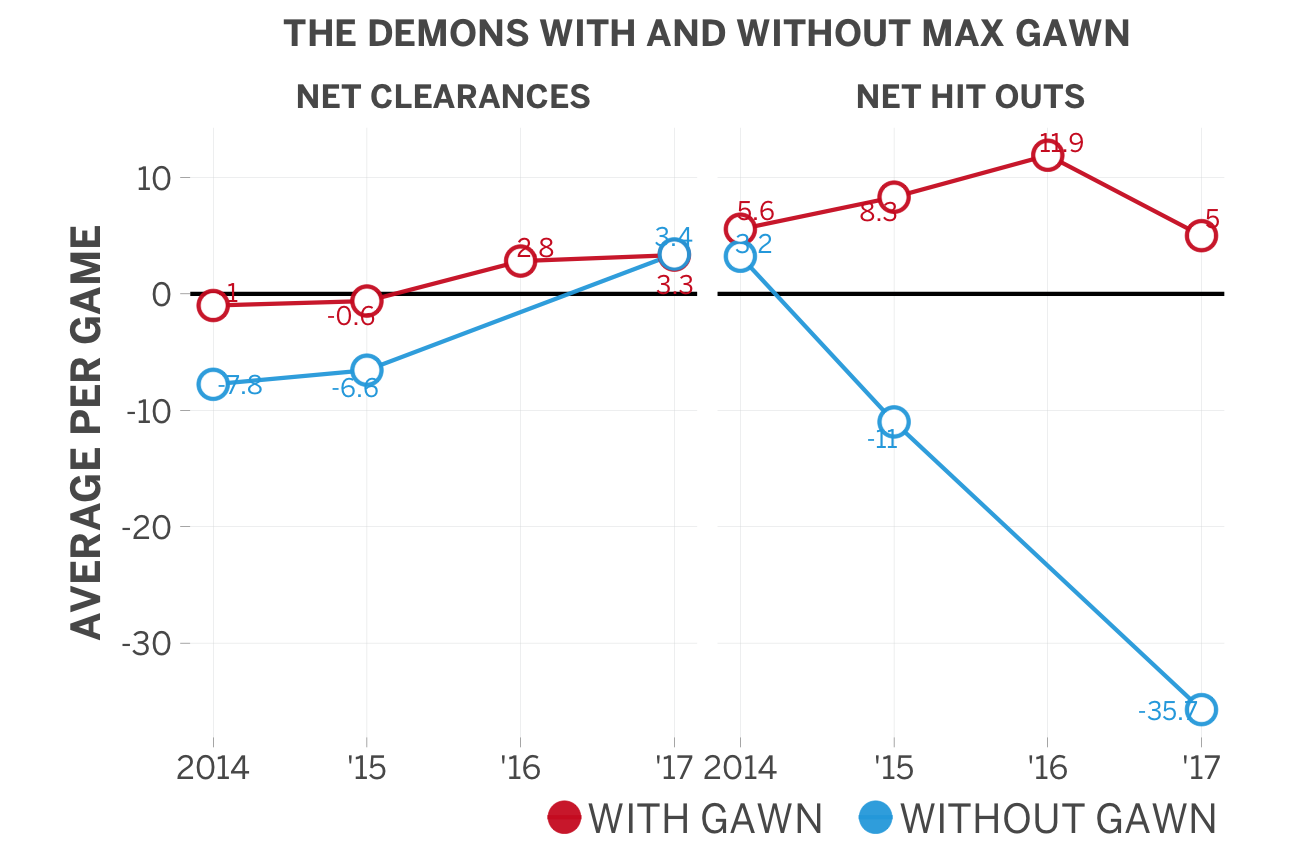 The Dees have found a way to keep winning clearance counts despite being destroyed in the ruck. They've averaged 35.7 fewer hit-outs than their opponents in games without Gawn this year, a truly eye-popping deficit. But they're finding a way to win more stoppages than they lose despite this, with the AFL's third highest tackle count likely contributing. The Demons have adapted remarkably well to the loss of perhaps their most important player, showing tactical flexibility. When Gawn returns in a few rounds time, the Demons just might become a really formidable side for the first time in a long time.

The Kangaroos quite dramatically flicked the switch from 'contenders' to 'rebuilders' at the end of last year, but there are some signs that their transition to the dreaded rebuilding phase is going well. For one thing, they've won four from their first 10 games, hardly a disastrous outing for a club at their point in the cycle. For another, they're developing as an even squad, one in which there are many paths to goal and many contributors. North Melbourne are averaging 9.5 goalkickers per game, up among the highest levels in the league alongside Port Adelaide, Geelong, and Adelaide. 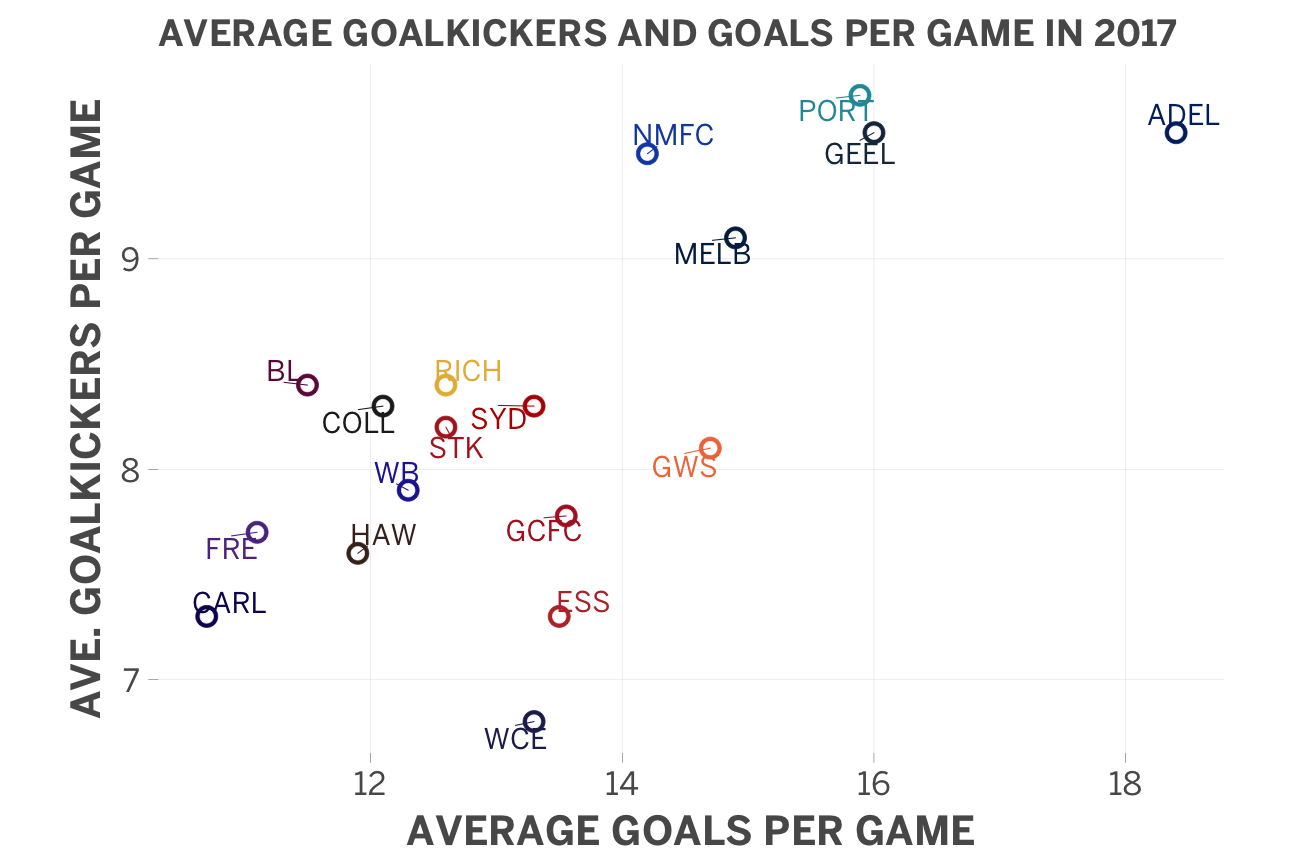 The Kangaroos aren't just equal on the goalkicking front; they also have the most even spread of any team when it comes to disposals as well. We use the Gini coefficient to measure disposals - the Gini would be 100 if one player got all of a team's disposals, and it would be 0 if all players on a team had the same number of disposals. At one end of this spectrum are the rebuilding Blues and Lions - teams that rely heavily on a few superstars. The Kangaroos are at the other end; they spread the ball around even more than the egalitarian Bulldogs. 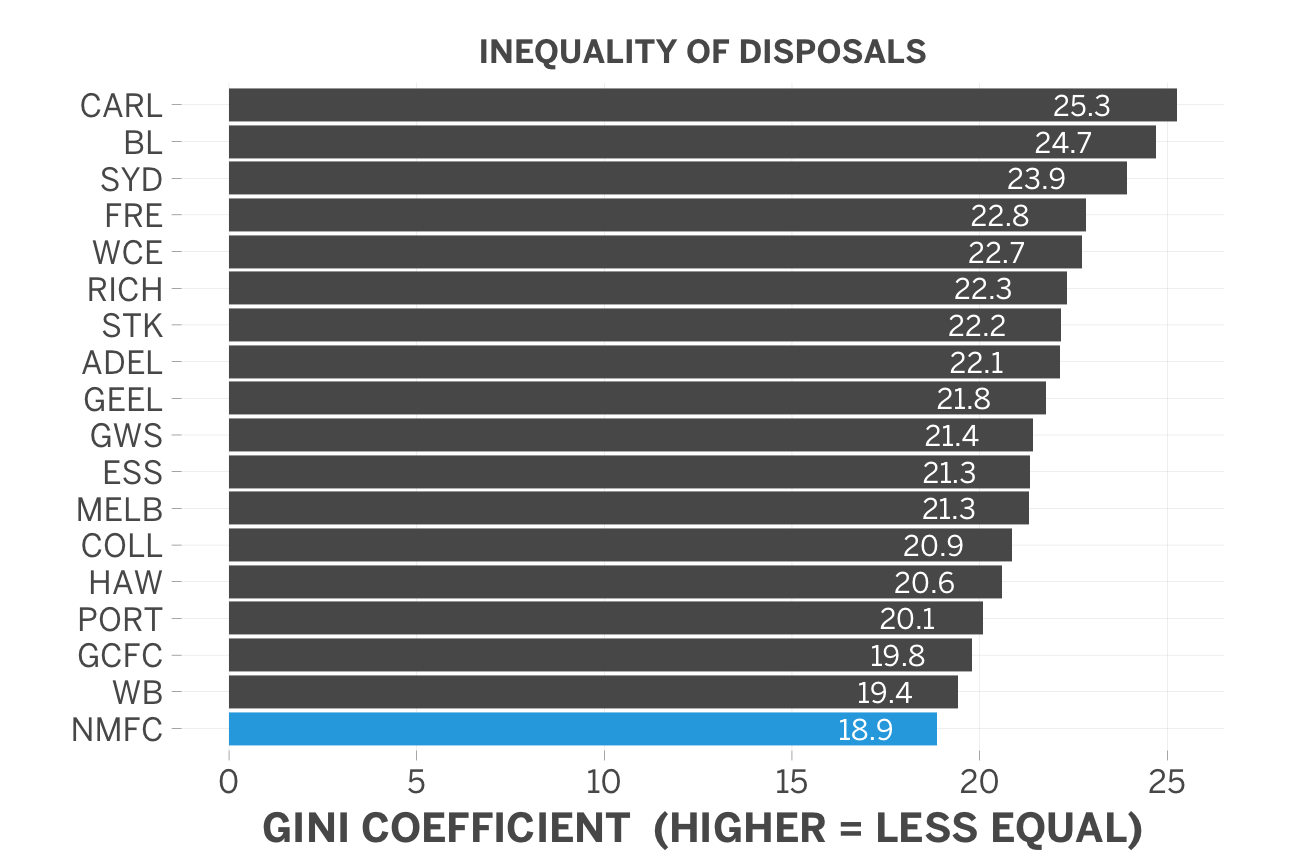 There's no one path back to the top eight for teams that are rebuilding their squad by focusing on younger players. But it seems likely the Kangaroos' approach - drawing on a broad range of contributors rather than a small core of superstars - is a sensible way to build a contender a few years down the track.

PORT ADELAIDE - DOMINANT BETWEEN THE ARCS

Back in 2014, when Port Adelaide missed out on a spot in the Grand Final by less than a kick, it was their midfield dominance that stood out. The 2014 Power recorded 1.2 inside 50s for every inside 50 they conceded - the league's best ratio that year. But then they fell back to the pack in 2015 and stayed there in 2016, recording about as many inside 50s as they gave up to their opponents. This year, their record between the arcs has soared, beating even their 2014 performance. The Power have recorded 1.3 inside 50s for every entry they've conceded so far this year, easily the best inside 50 ratio in the competition. 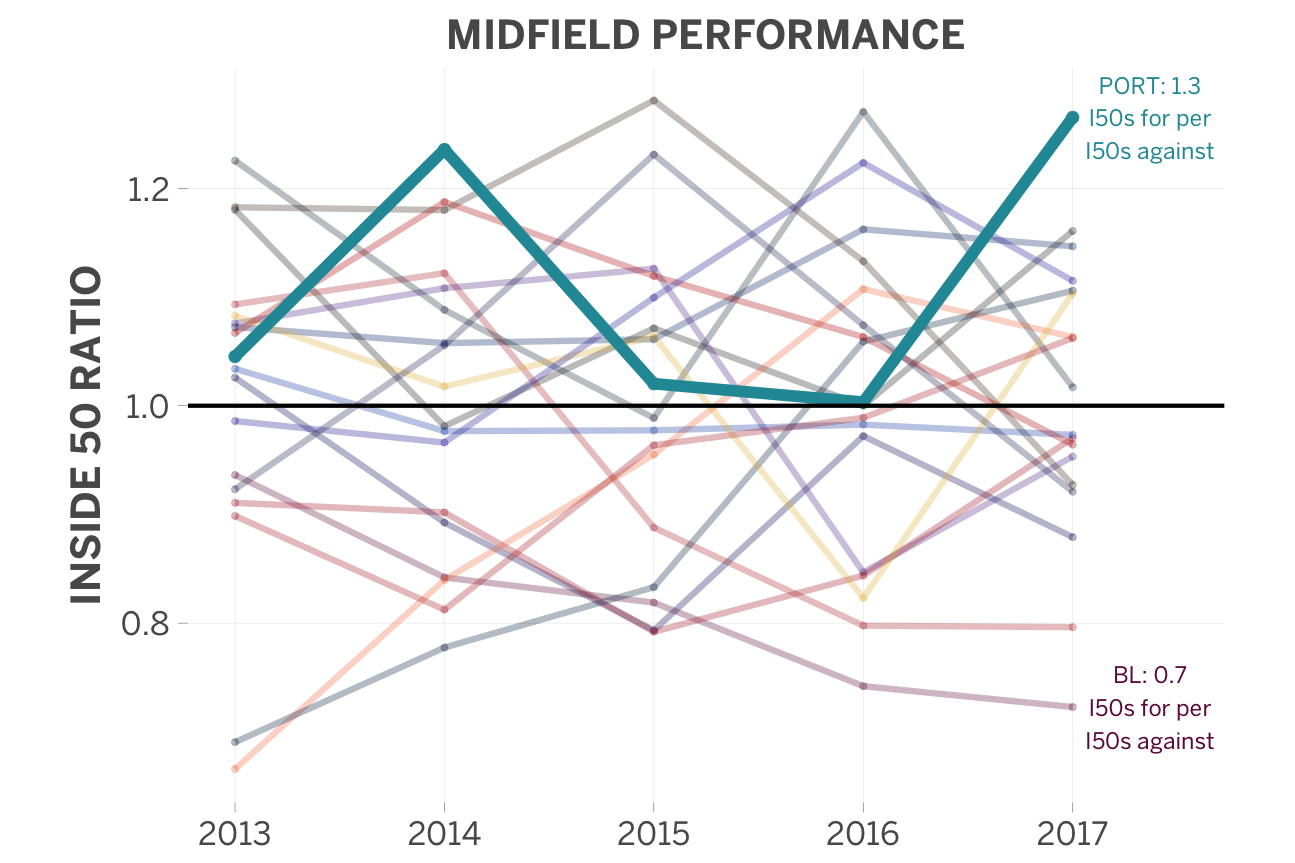 Why has Port's performance soared? There are undoubtedly a lot of factors. Paddy Ryder can ply his trade without watching for the third man-up, Sam Powell-Pepper has burst out of the blocks, and Ollie Wines is a clearance machine. But one big factor might be the resurgence of Brad Ebert's performance around the contest. Ebert has gone from averaging just 1.8 clearances per game last year to a whopping 4.8 this year, the second best in the team. He's also racking up 11.1 contested possessions each match, up from 7.5 in 2016, again second in the squad. 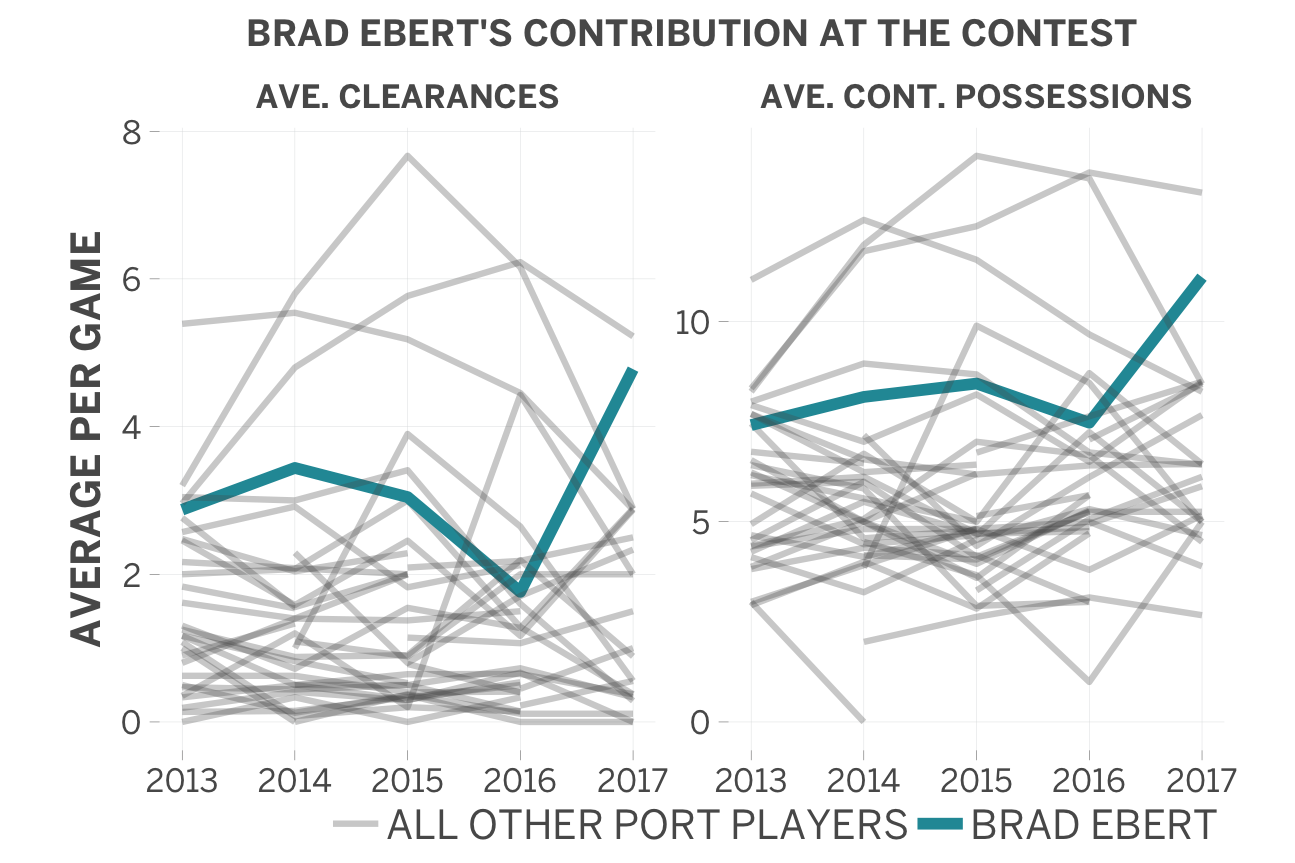 The Power are the real deal this year, winning games off the back of their strength in the middle of the ground. Neutralising Ebert might hold the key to taking them on.

The Tigers are only recording 1.35 uncontested possession for every contested possession, easily the lowest ratio in the league and the lowest ratio for several years. This is a dramatic U-turn from last year, when the Tigers were middle of the pack on this measure. They're no longer chipping the ball around in space - Richmond only records 0.3 uncontested mark for every kick they make, again the league's lowest. 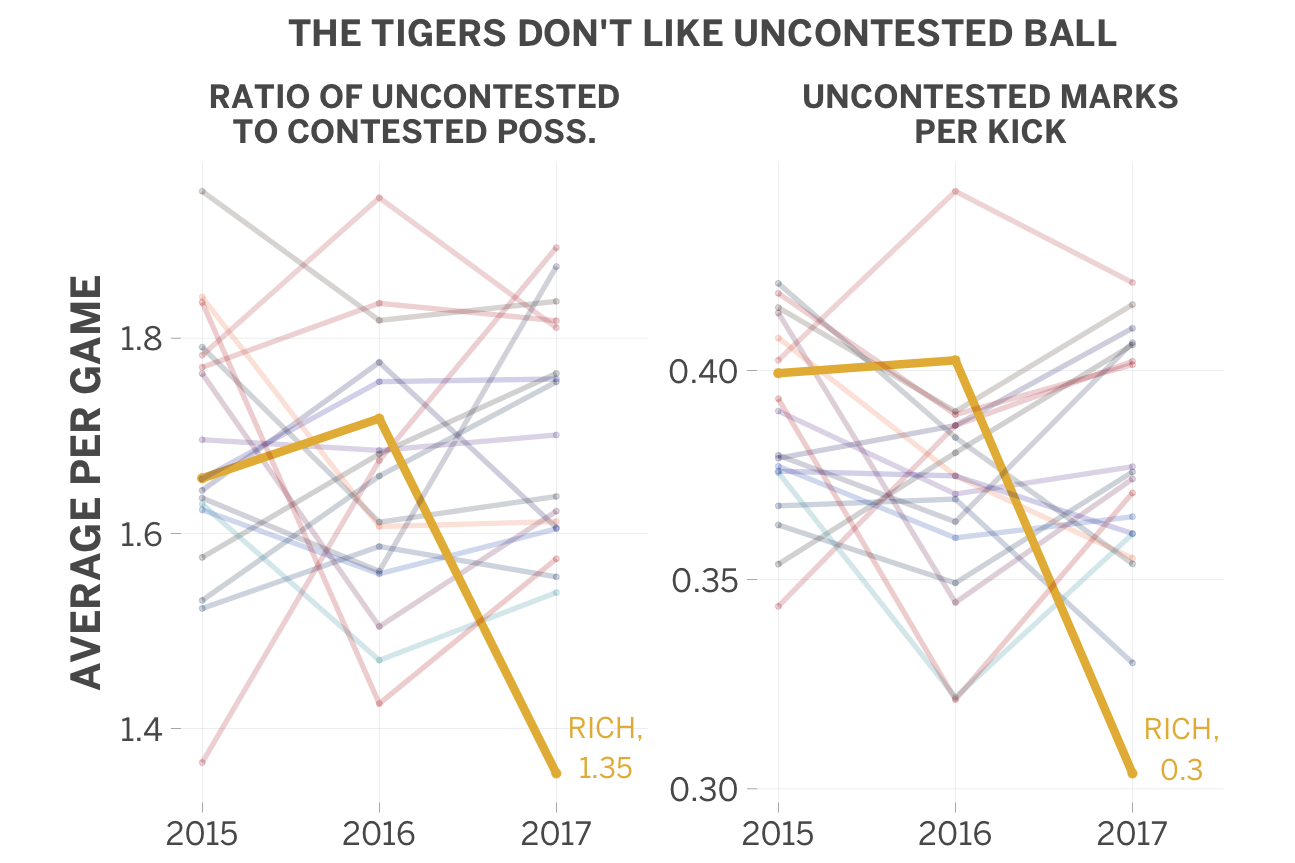 Richmond are playing a dramatically different brand of football than the one they trotted out in 2016. It's more direct, with the Tigers seeking to move from the contest to goal without chipping around into space first. They've arguably been a better team than their record suggests, with narrow losses denting their win total - it will be interesting to see if their new style continues to work for them.

ST KILDA - LOTS OF SHOTS PER INSIDE 50, AT BOTH ENDS

The Saints were a decent side last year, missing out on finals only by percentage, and aspects of their game have clearly improved in 2017. For one thing, they're much more efficient at turning inside 50s into shots at goal. Last year, they only recorded 0.45 scoring shots for every entry inside their arc, a rate in the bottom half of the league. This year, they've improved dramatically in this part of their game, recording 0.5 scoring shots for every inside 50, the fifth best ratio in the AFL. 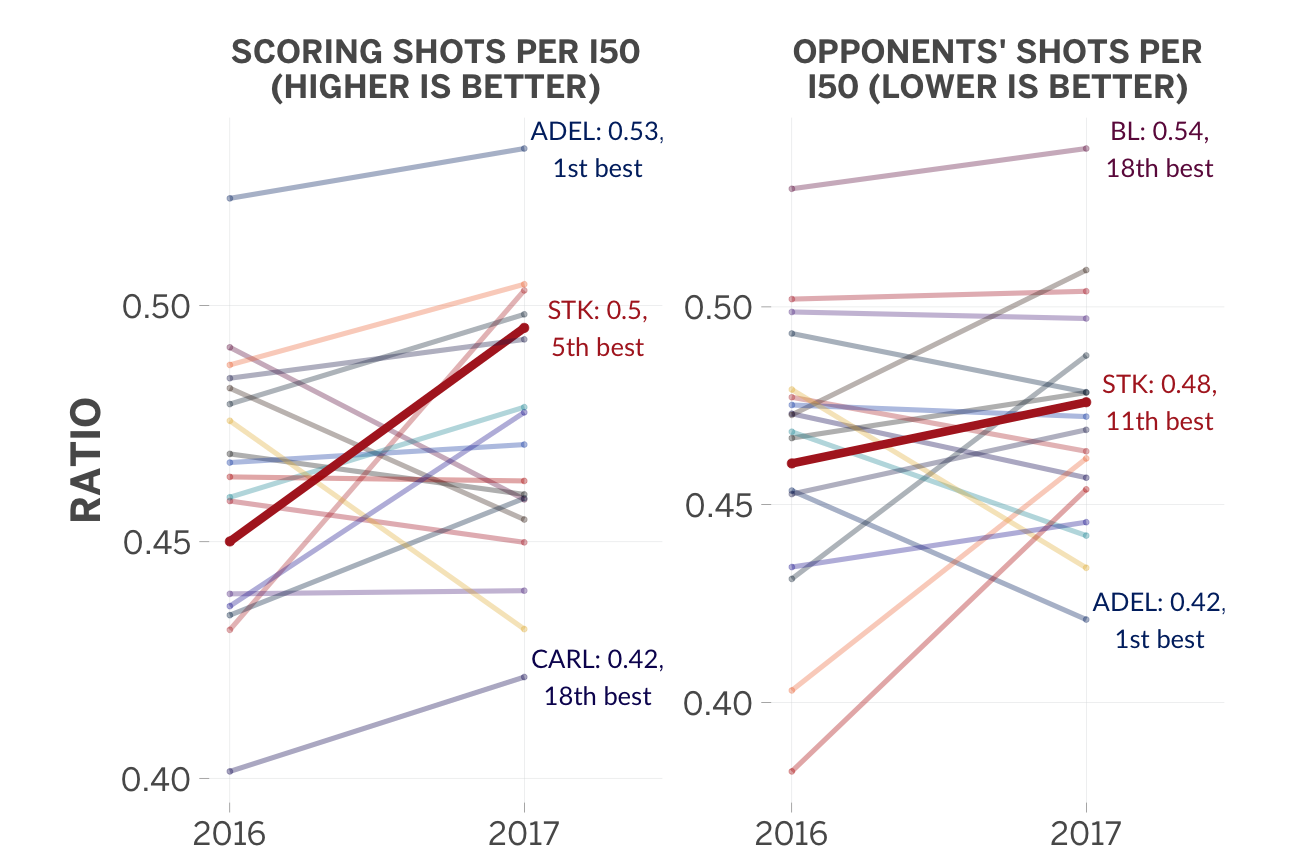 The Saints are recording more shots for each inside 50. The problem for St Kilda is that their opponents are, too. Their rivals so far in 2017 have averaged 0.48 scoring shots per inside 50, with the Saints conceding more shots per entry to their defensive arc than they were last year. This defensive efficiency is a clear area St Kilda needs to improve if they're going to improve on last year's 12-win season.

Before the season started, just about everyone - including the betting markets and our Elo model - rated last year's runners-up among the best chances to win the premiership this year. Instead, they sit at 3-7. They'd need to win eight out of their remaining 12 games and have some luck go their way to make the finals from here, which seems unlikely.

So the question is: what has gone wrong this year for the Swans? Undoubtedly, injuries are part of the answer, but Sydney is hardly the only team dealing with the absence of key players. Their youth probably plays a role in their inconsistency - the Swans were a fairly young side even last year, and they've skewed younger in 2017. But the on-field stats don't show a smoking gun for Sydney's decline. Instead, they seem to have deteriorated more or less across the board.

The Swans have gone from having the fifth best net clearances in 2016 to the 15th best in 2017. Their net contested possession count is down from third in the league to 12th, and they've gone from more or less breaking even in the hit-out count to averaging -11.9 net hit-outs per game. After leading the league in tackles last year, they've only laid the 11th highest number of average tackles per game so far this year.

A few key players seem to performing at a noticeably lower level than they were last year. Kieren Jack has gone from averaging 92 Fantasy points per game to 62; Kurt Tippett and Luke Parker have also seen their averages tumble. 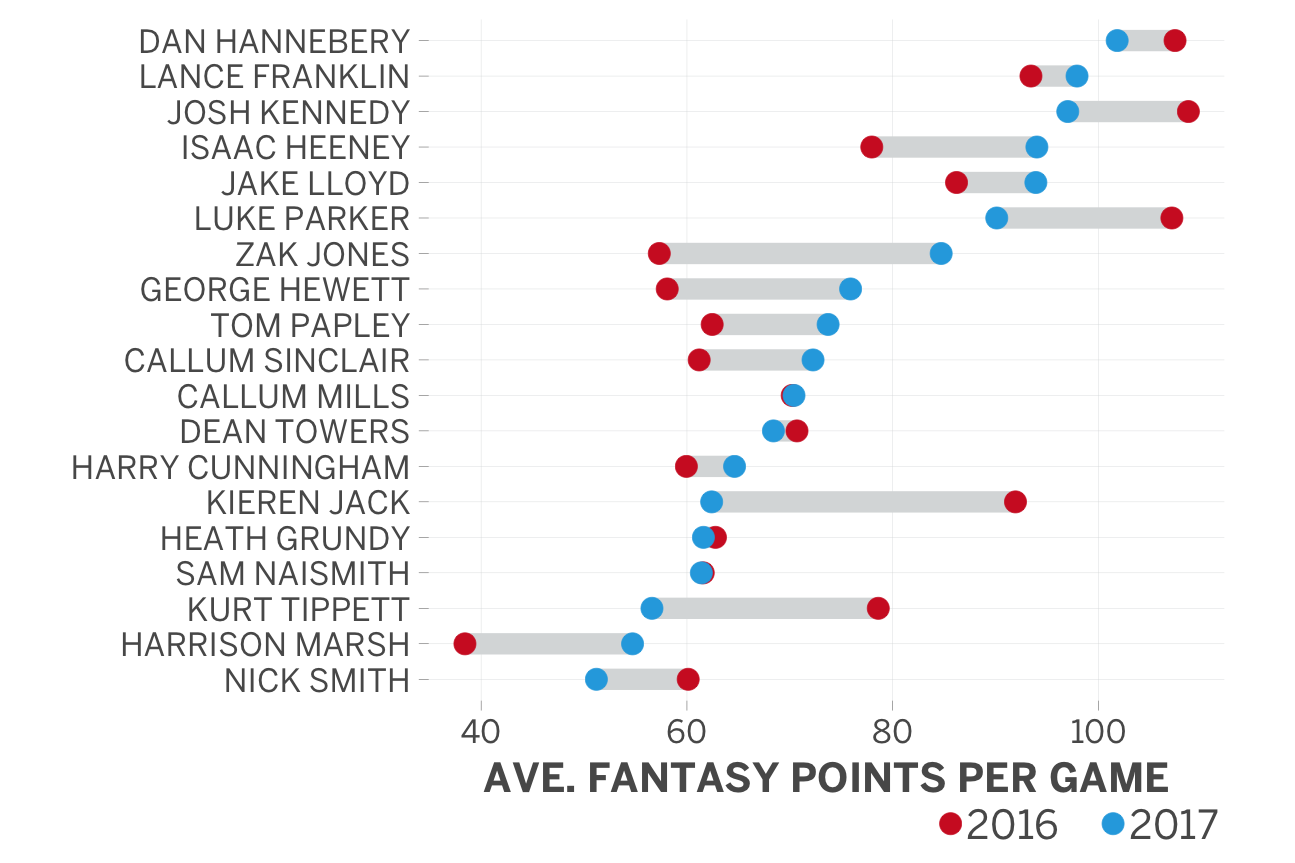 It's important not to overstate the Swans' decline. Some of their losses have been close, and their percentage is still a touch above 100 percent. Despite the loss to Hawthorn, our Elo model still rates them as a slightly better-than-average team. But for a flag favourite to be sitting 3-7 is definitely cause for some head scratching. The data don't yet tell a complete story about why the Swans are failing to fire.

Western Australia has lots of ancient wonders, like the rock art at the Burrup Peninsula, the underwater wonder of the Ningaloo Reef, and the playing list of the West Coast Eagles.

At 26.9, the Eagles have the oldest group of active players in 2017, weighted by games played. Out of their 220 player-games so far (22 players per game over 10 rounds), only 44 slots have been filled by players aged under 24. West Coast's age profile skews heavily towards older players. 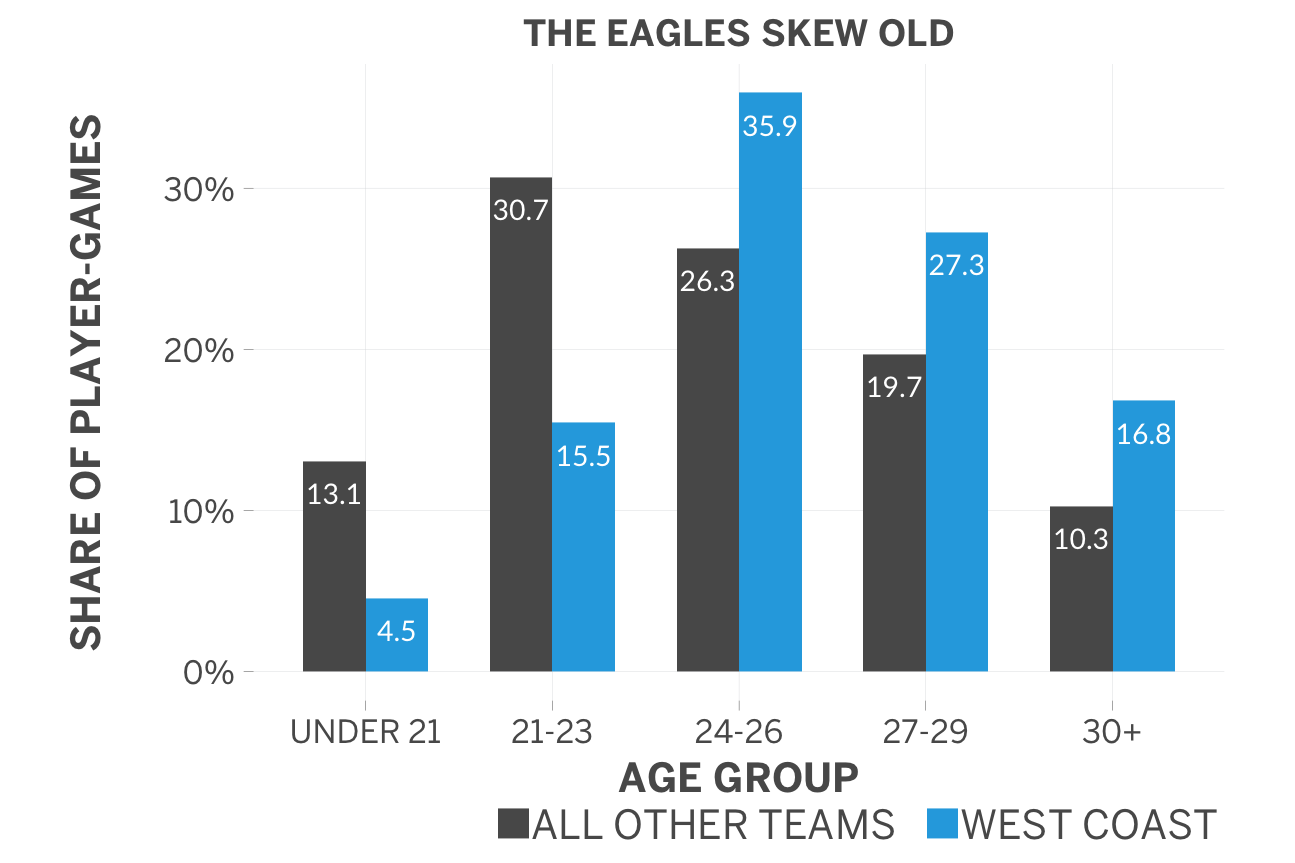 Relying on guys in their mid-to-late twenties and above is not necessarily a bad thing, in the short-term. Players tend to peak in their mid-to-late twenties, and most premiership-winning teams have had a median age of between 25 and 27. But there's an obvious trade-off between the present and the future, and the Eagles have gone all-in on the present. Never before have West Coast given such a small share of their games to young players. 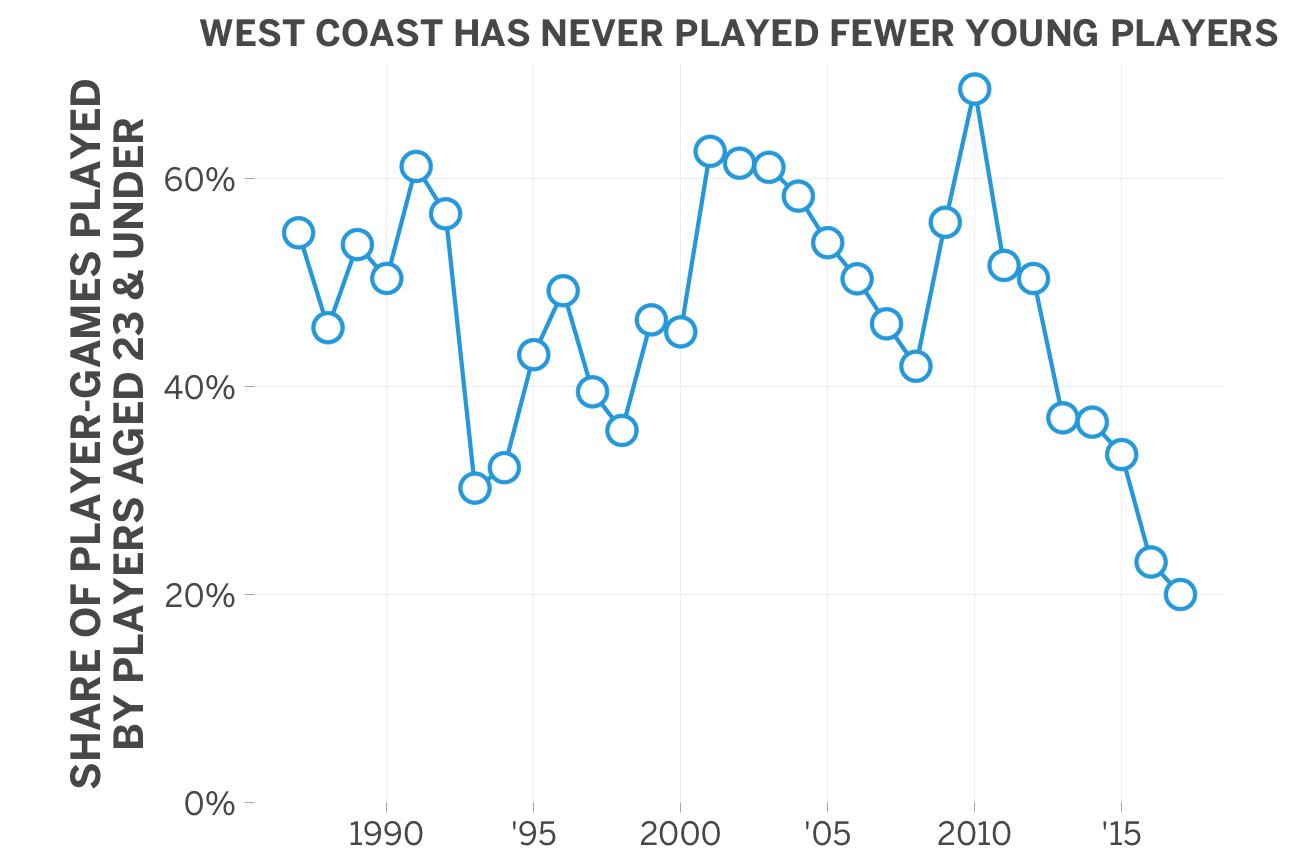 The premiership window is unlikely to close for the Eagles this year, and the - presumed - healthy return of Nic Naitanui in 2018 could lift the club back up to its former heights. But the window is likely to close for West Coast quite soon, and the fall could be dramatic unless the club starts getting more games into younger players.

WESTERN BULLDOGS - THEIR WORST ARE THE BEST

The Dogs have no standout superstars this year, at least when we measure their performance using that highly imperfect but still useful measure, Fantasy (aka Dream Team) points. Marcus Bontempelli, their most highly rated player, has a median of 104 Fantasy points per game, meaning that he has scored over that mark in half his games and under 104 in the other half. That's among the league's lowest Fantasy points per game for a team's best player. Jack Macrae, Mitch Wallis, Luke Dahlhaus and Lachie Hunter round out the Dogs' top five Fantasy scorers, and none of them are putting up outstanding numbers either.

Instead, where the Dogs stand out is the even contribution they're getting from their squad, and the solid performances of the lesser names on their list. Their 19th-25th players this year have put up better numbers than the equivalent players at any other club. The Dogs have the lowest Gini coefficient of Fantasy points, meaning they're the most equal team in the league. The Bulldogs are testing the adage that it's better to be a champion team than a team of champions. 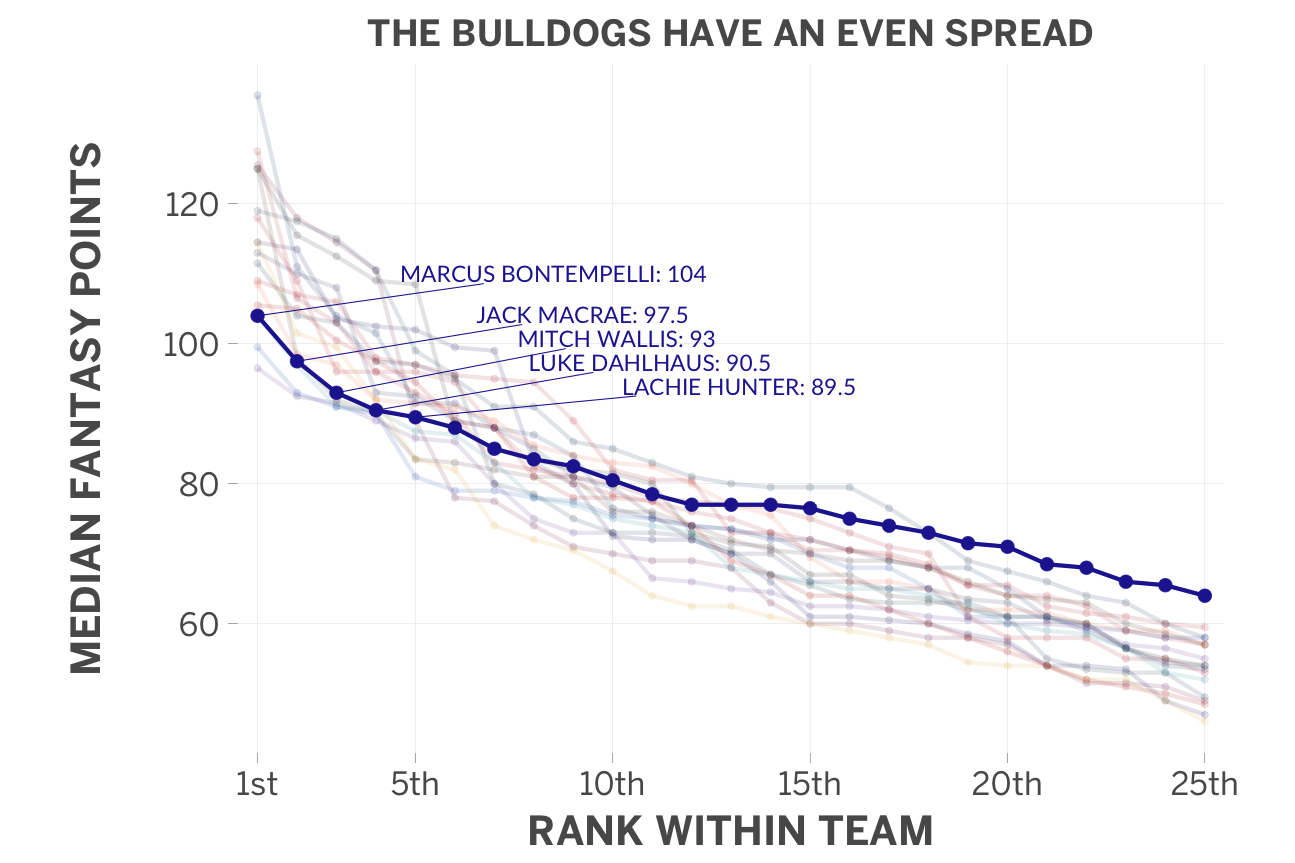