Party World Rasslin' (PWR) is "distinguished by its comedic theatrics and a high, fantastical storyline," wrestler Chiquita Smith said. PWR began as a birthday party antic in a backyard, and the themed events now draw about 2,000 fans to the warehouse of a brewery in Austin, Texas.

The audience for PWR performances is unique, according to Smith: "They're not necessarily wrestling fans. The big draw is the drama and being part of a big bunch of people getting into a room and yelling for a few hours." The fans are dedicated: PWR is crowd-funded ahead of each event, so the event itself is free. Fans follow storylines from performance to performance and collectively cheer or jeer recurring characters such as "Dad Bod," "Bench Horse," "Theodosia," "Dan the Man" and "Dumpster Babes."

The performers, as a team of sorts, have bonded: "PWR gives all of us a reason to work out, hang out with friends and put our best efforts into creating amazing shows. The members are all weirdos who love and support each other and I've never been a part of anything else like it," Bohannon said.

PWR hosts a "Slam" at a venue in Austin every three months. All have themes: Slamhain IV was a magical forest gone wrong, Dino Slam was a frolic of ancient reptiles, and Space Slam was an intergalactic adventure through time and space.

On March 17, PWR will hold its next event, WrestleSlam IV: WormQuest, at 4th Tap Brewery, which will be transformed into a medieval castle. The event is billed as "the legendary heroes of PARTY WRESTLING prepare for low-fantasy adventures into the heart of doom itself. Servants of the darkness lurk everywhere! Who will survive?!" 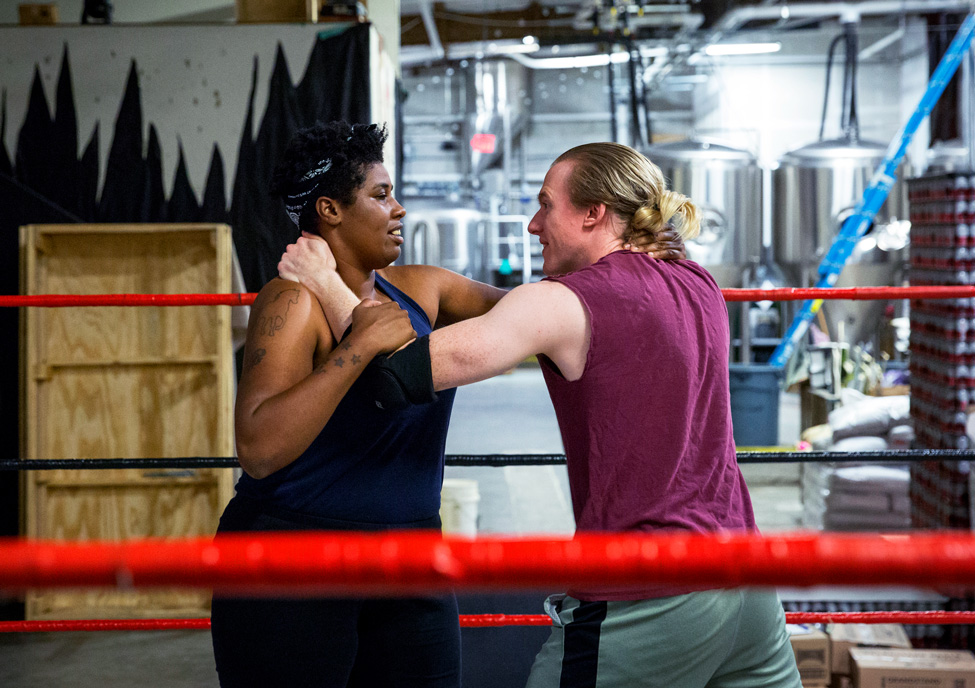 Chiquita Smith, left, practices locking up with Danny Zigal during a PWR practice. PWR's amateur wrestlers are trained by "Jojo Bravo" a pro wrestler who coaches and performs with PWR. 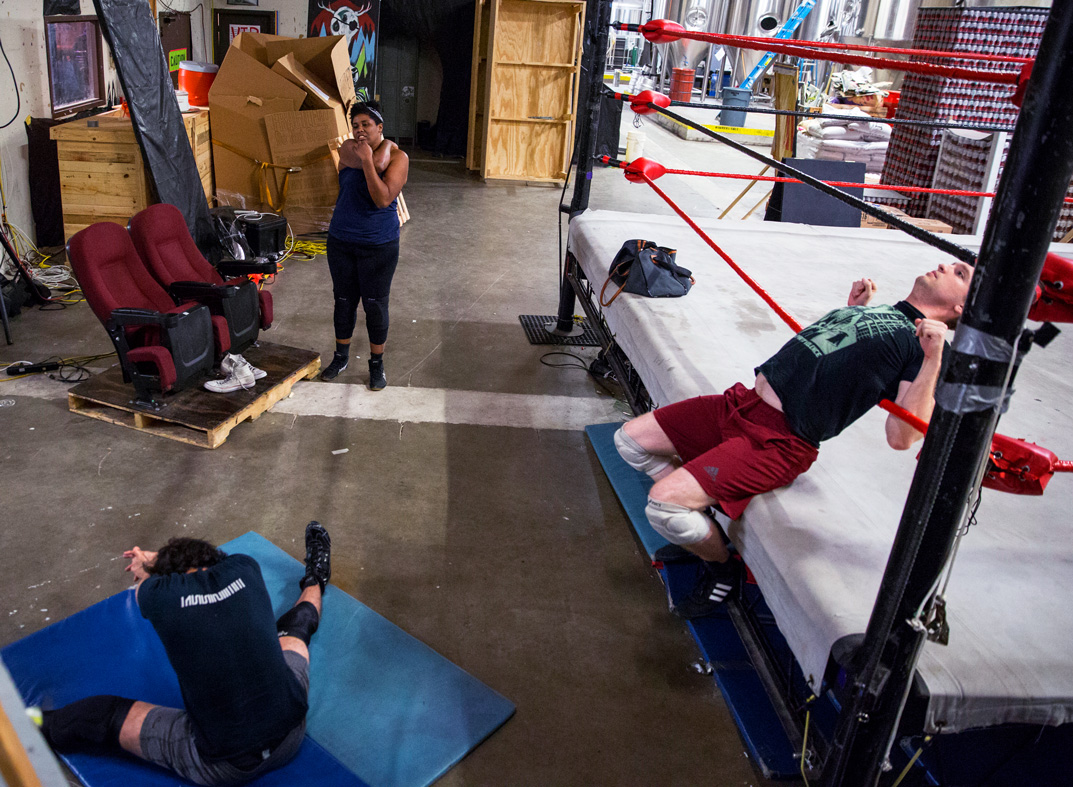 Chiquita Smith stretches before a Party World Rasslin' practice in November in the back of a brewery in Austin. The ring PWR uses was purchased in Florida by a PWR wrestler known as "Mike the Bear." He traveled to pick it up and says, "It was living on a flea market grounds and serving as a stage/sale item for years. ... It's a 16-by-16 metal ring, it weighs about a ton and a half. The platform is made of wood laid over metal crossbar supports." 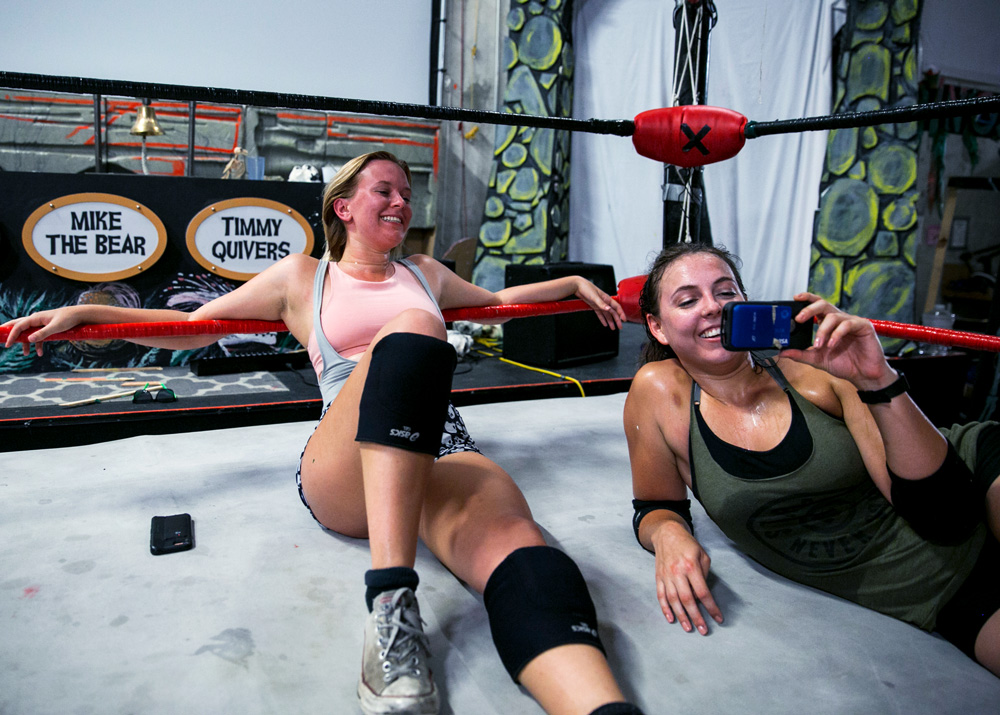 Shelby Bohannon and Ally Elsey watch wrestling moves during a break at PWR practice. "It seems surprising that there are so many really smart people in PWR," Bohannon said, "but an idea this stupid could only get this big when the people involved are really obsessive." 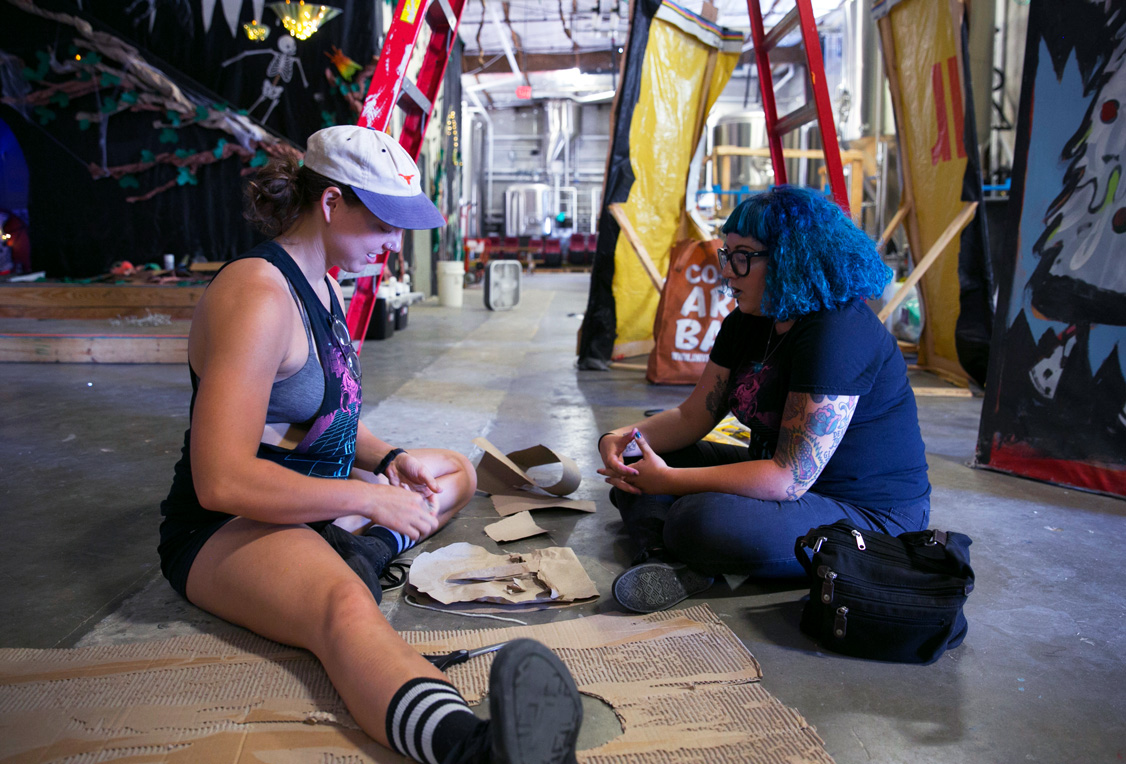 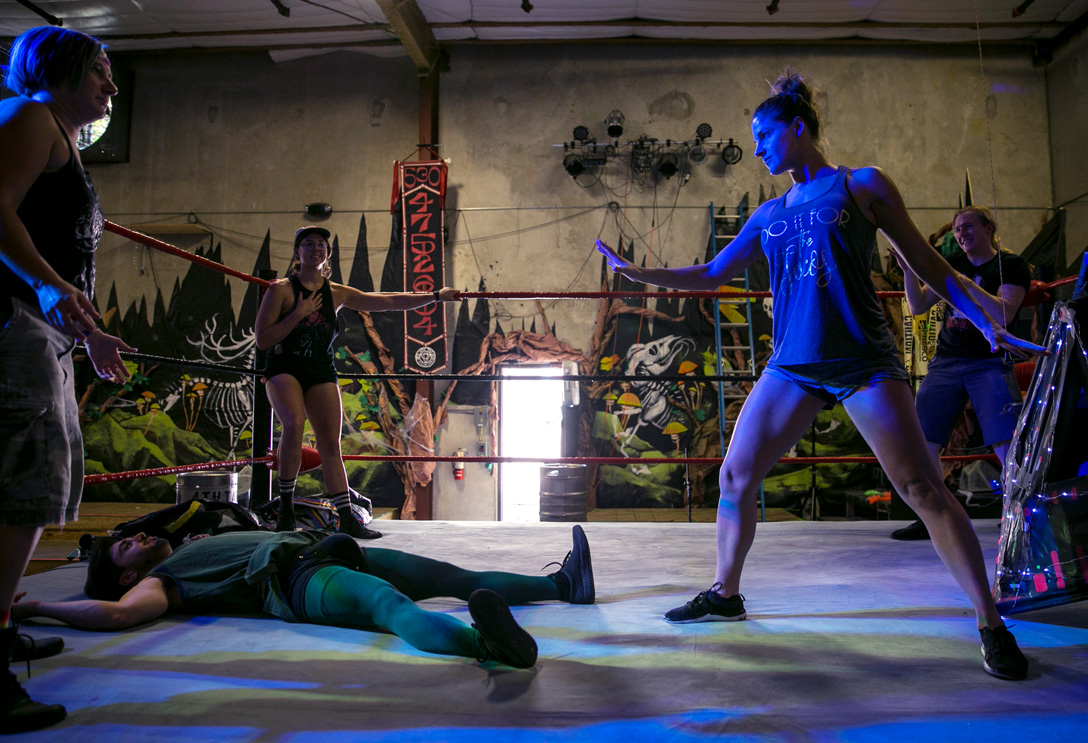 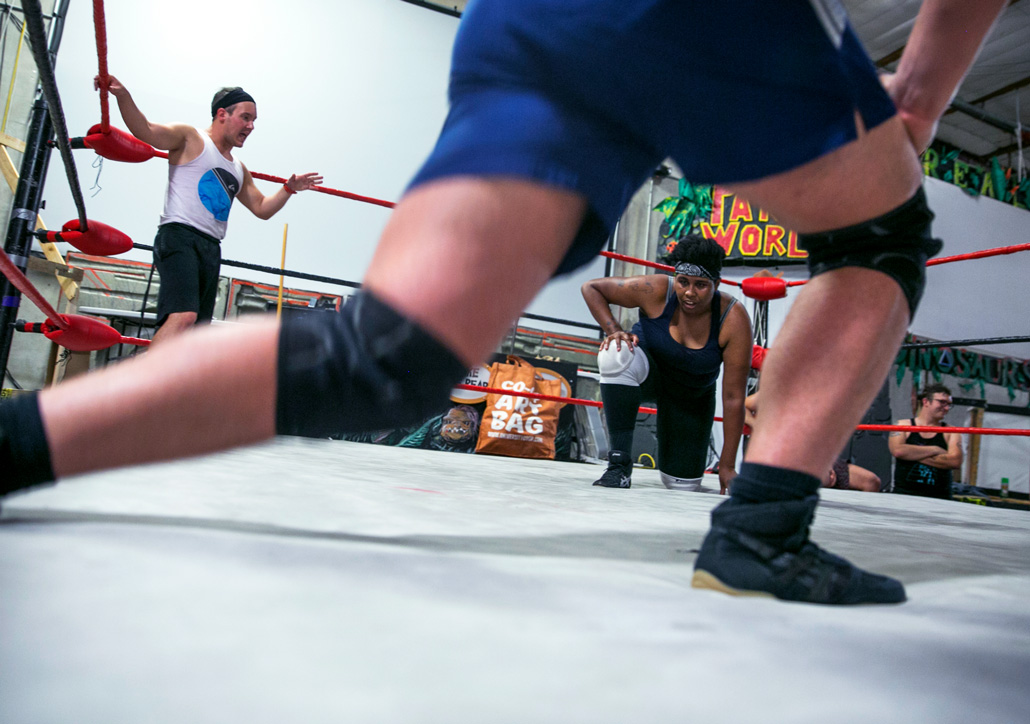 Chiquita Smith being coached by "Jojo Bravo" during a practice. Smith says that when she is in a match she feels nervous but has learned to ignore crowd reactions. "I need to practice [for the matches]. I'm hungry for it." 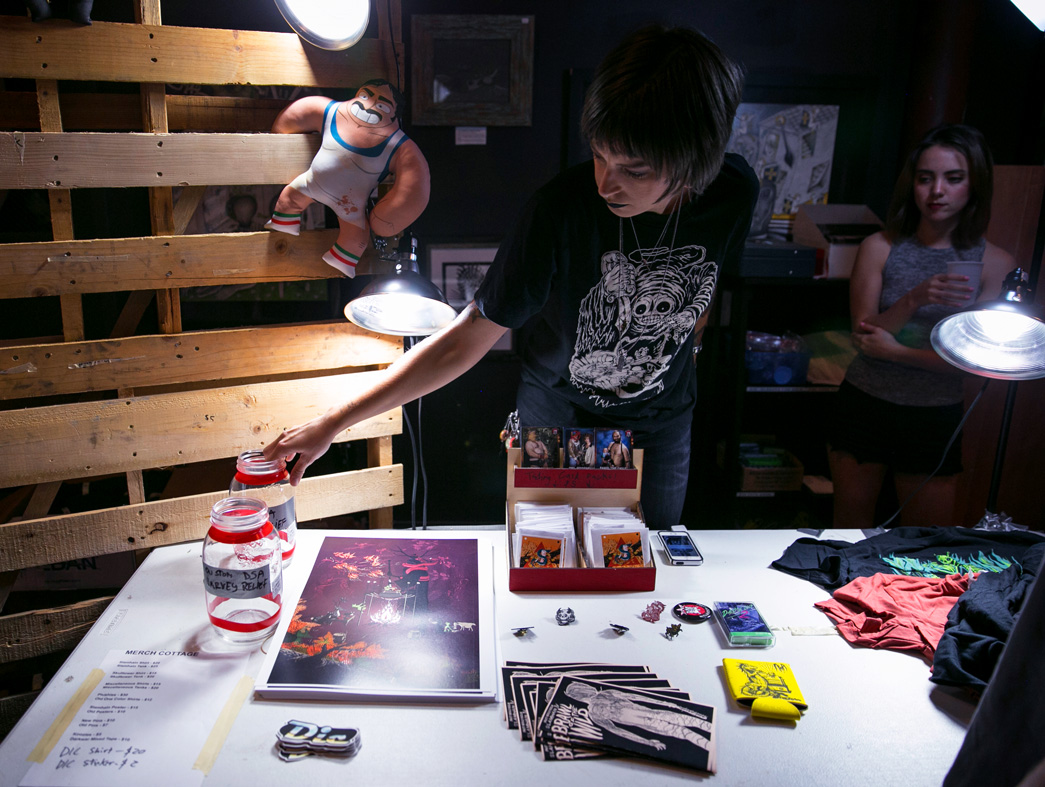 A woman sells merchandise outside the main performance space. PWR is crowd-funded ahead of each event, so admission is free. 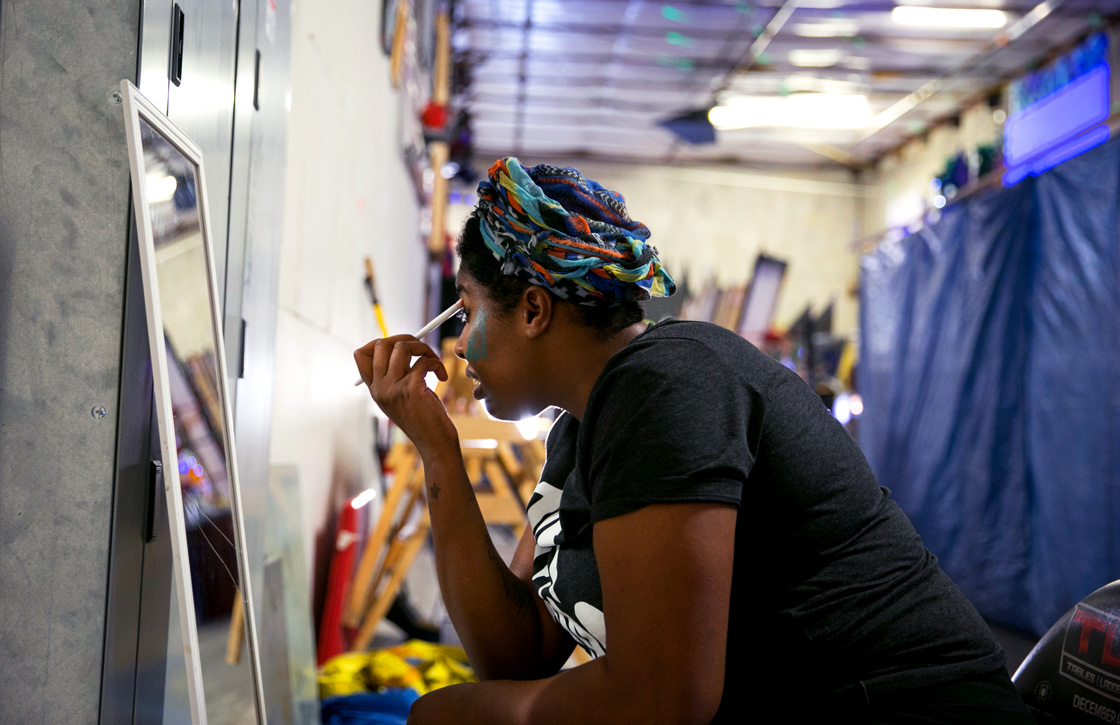 Chiquita Smith applies makeup to be a forest nymph for Slamhain IV, which had the theme of a magical forest gone wrong. 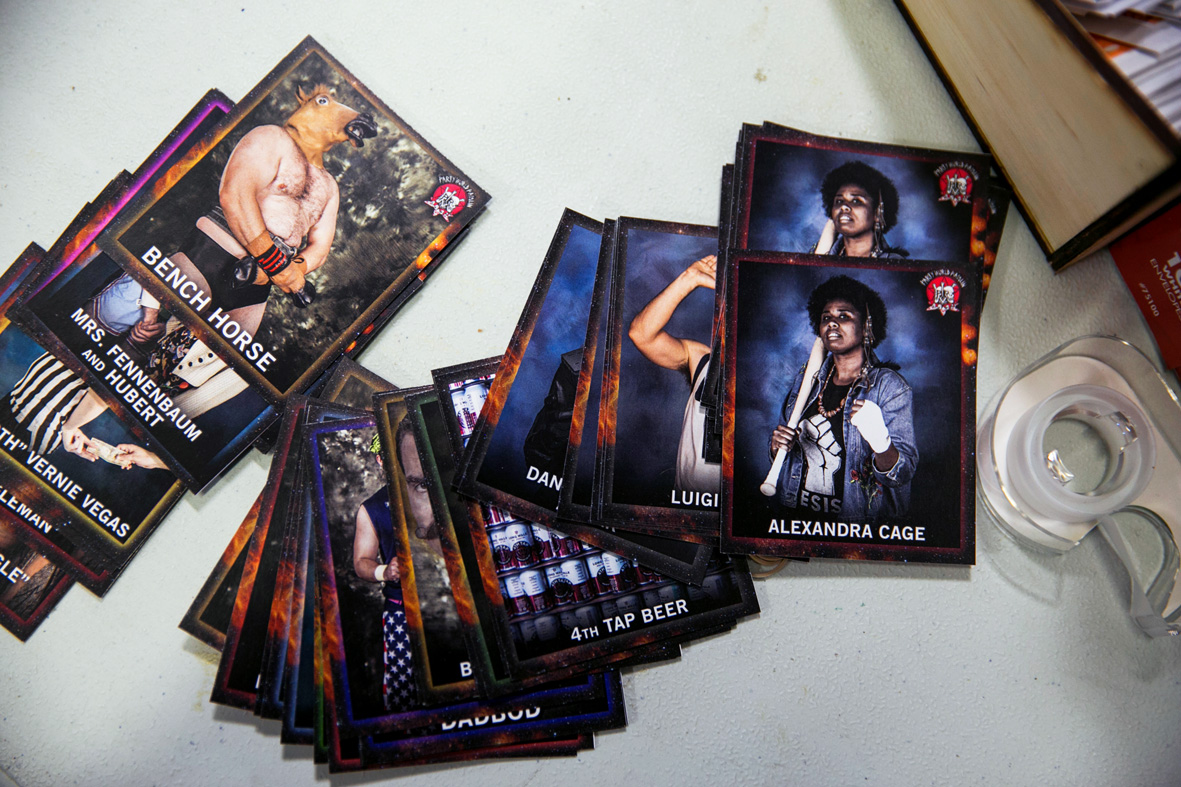 PWR trading cards are sold at the merchandise table at the performance. "Alexandra Cage" is one of Chiquita Smith's characters. She says the inspiration is from "Mr. T and blaxploitation films from the '70s, the mom from the movie 'Surf Nazis Must Die,' '90s wrestler Madusa/Alundra Blayze." 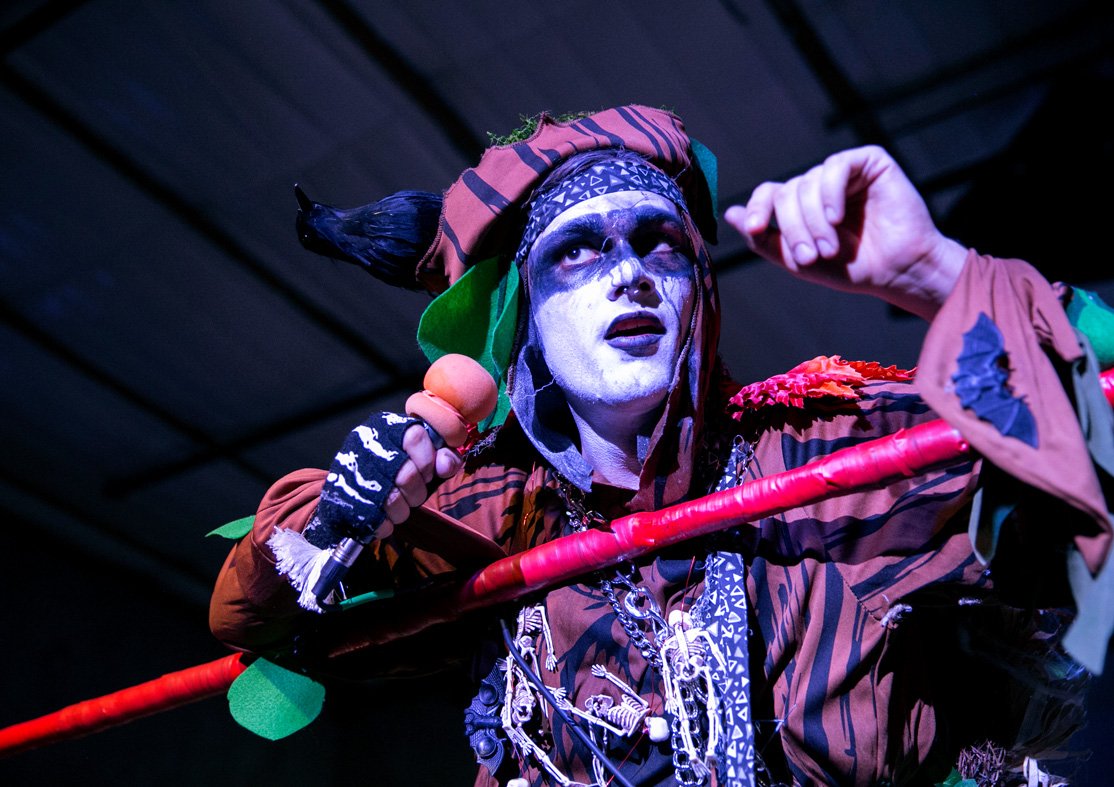 Tim Faust performs as "Timmy Quivers" during a PWR event. Quivers provides running commentary during the bouts for the audience. 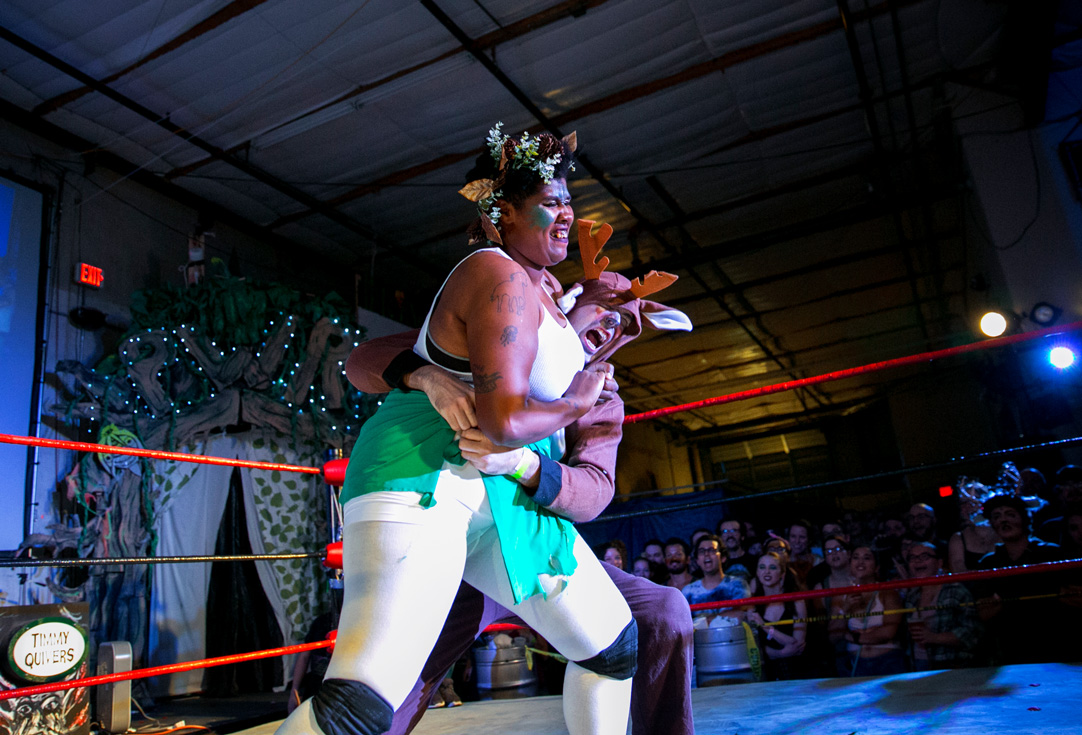 Chiquita Smith, dressed as a forest nymph, puts a choke hold on Ryan Cape during a PWR event. 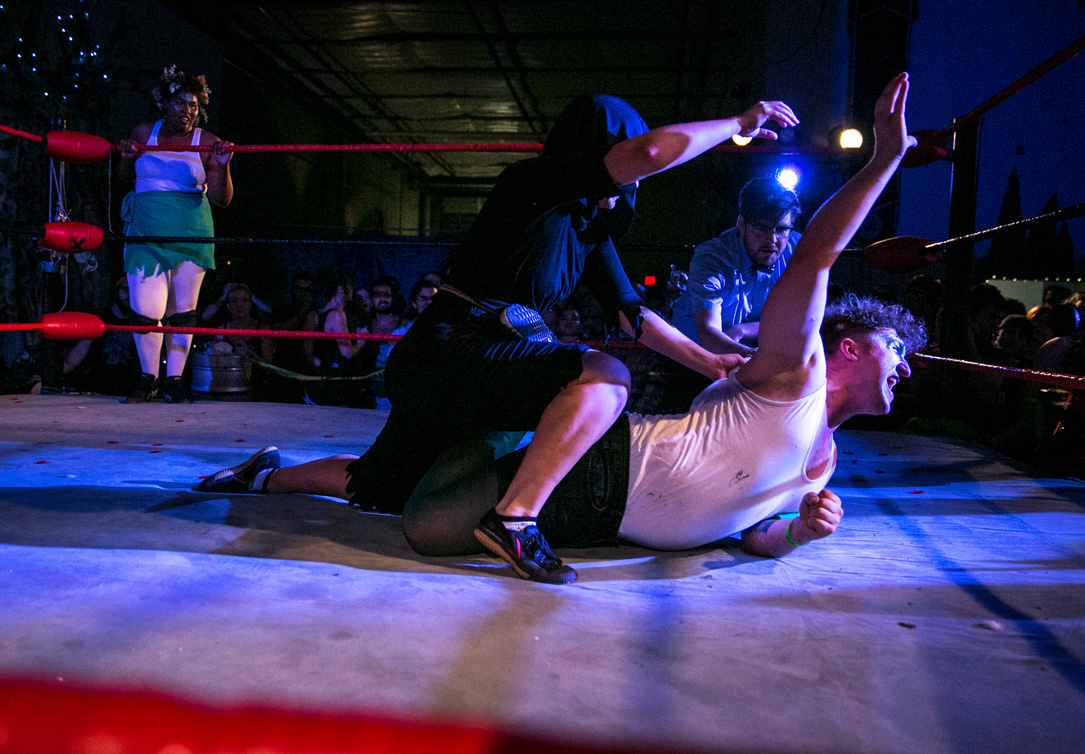 Adam Serwa cries for help while tackled by an opponent during a match. 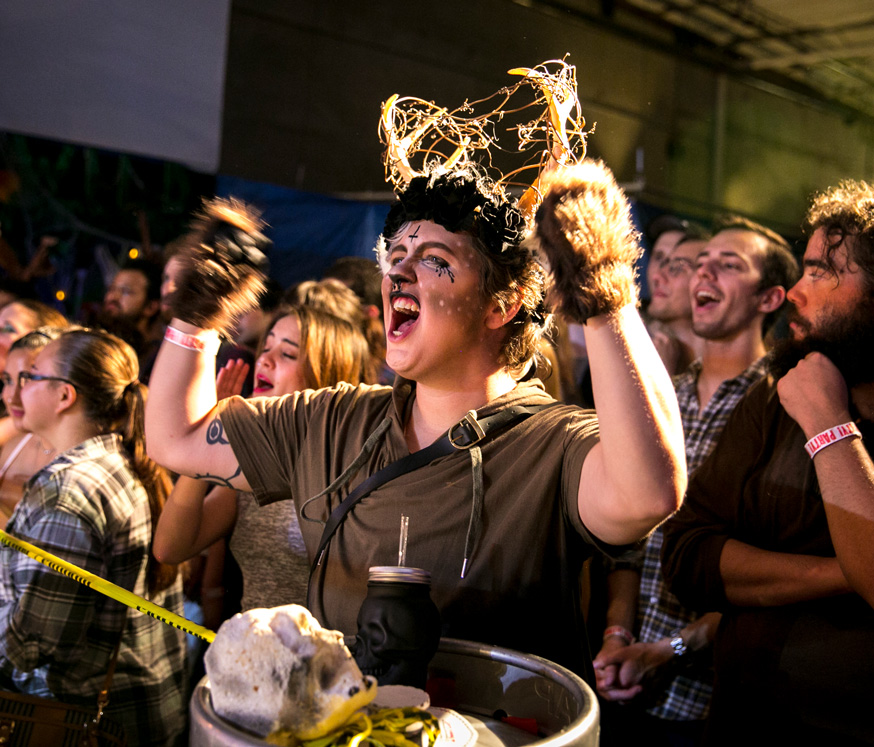 A fan dressed in the theme of the night cheers performers. Smith says the big draw for fans is the storylines, drama and recurring characters, as well as "getting into a room and yelling for a few hours." 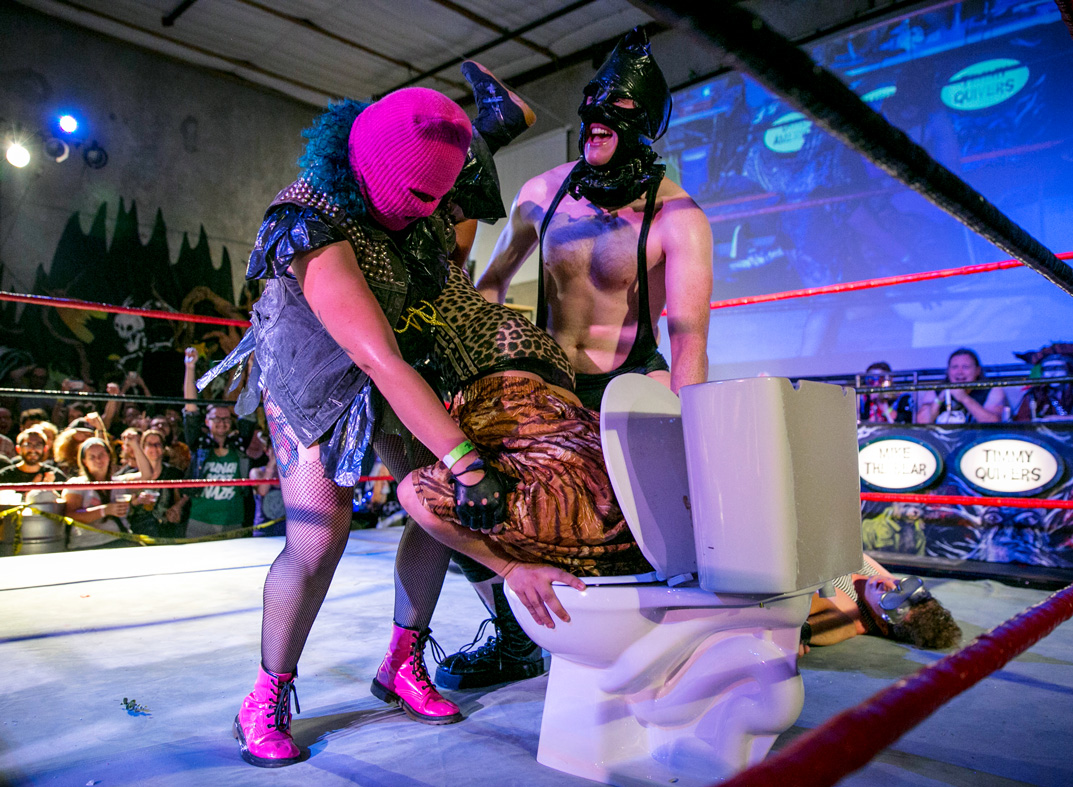 Noel Frangeskou aka "Pink Eye" and "Babyface" give another wrestler a swirlie during a PWR event. 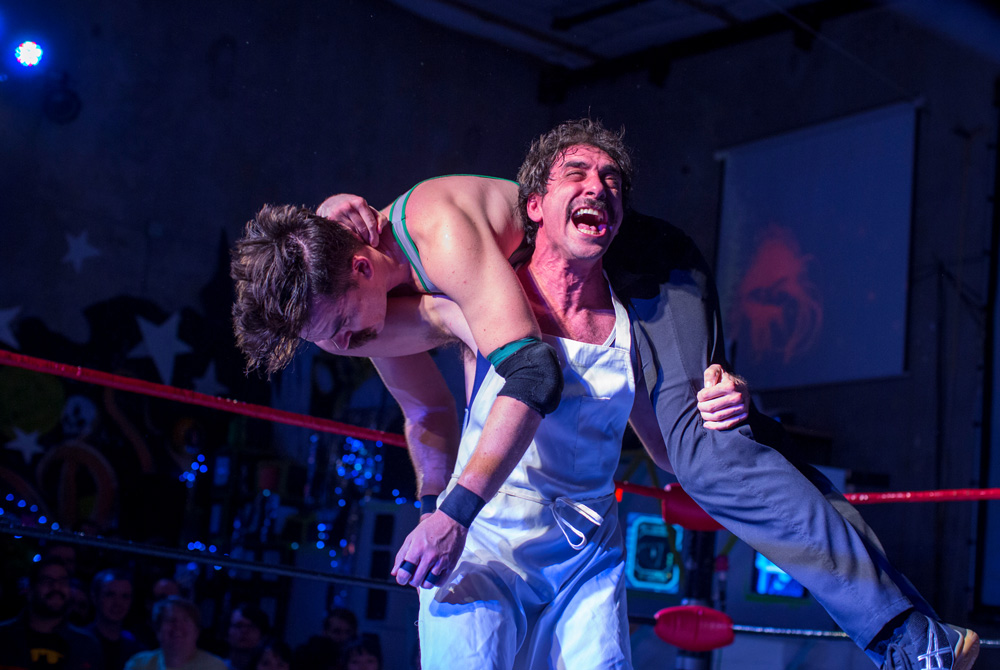 PWR commissioner Chris Monica as "Luigi Primo," a character who is a pizza chef has a mustache battle with Sean Mcintosh aka "Big Daddy Bolero." Monica produces the shows, co-owns PWR with Jared Blondeau and contributes to most of the storylines. 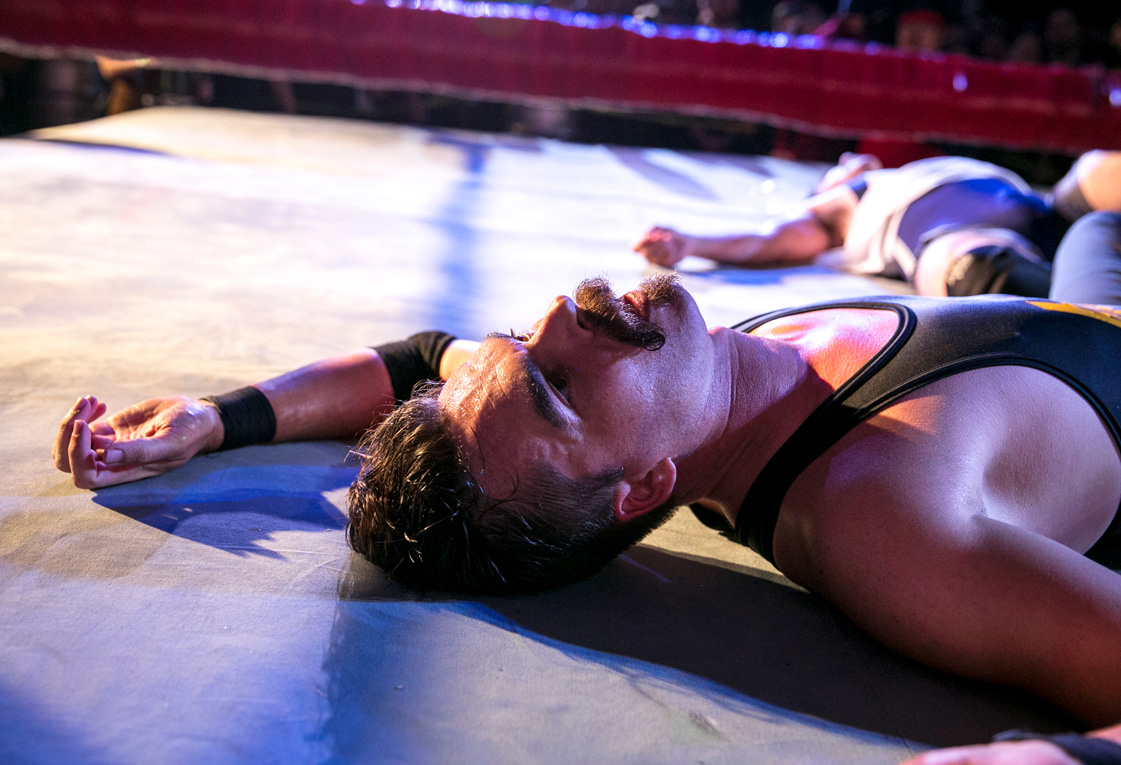 Sean Mcintosh recovers from a big hit in the ring. 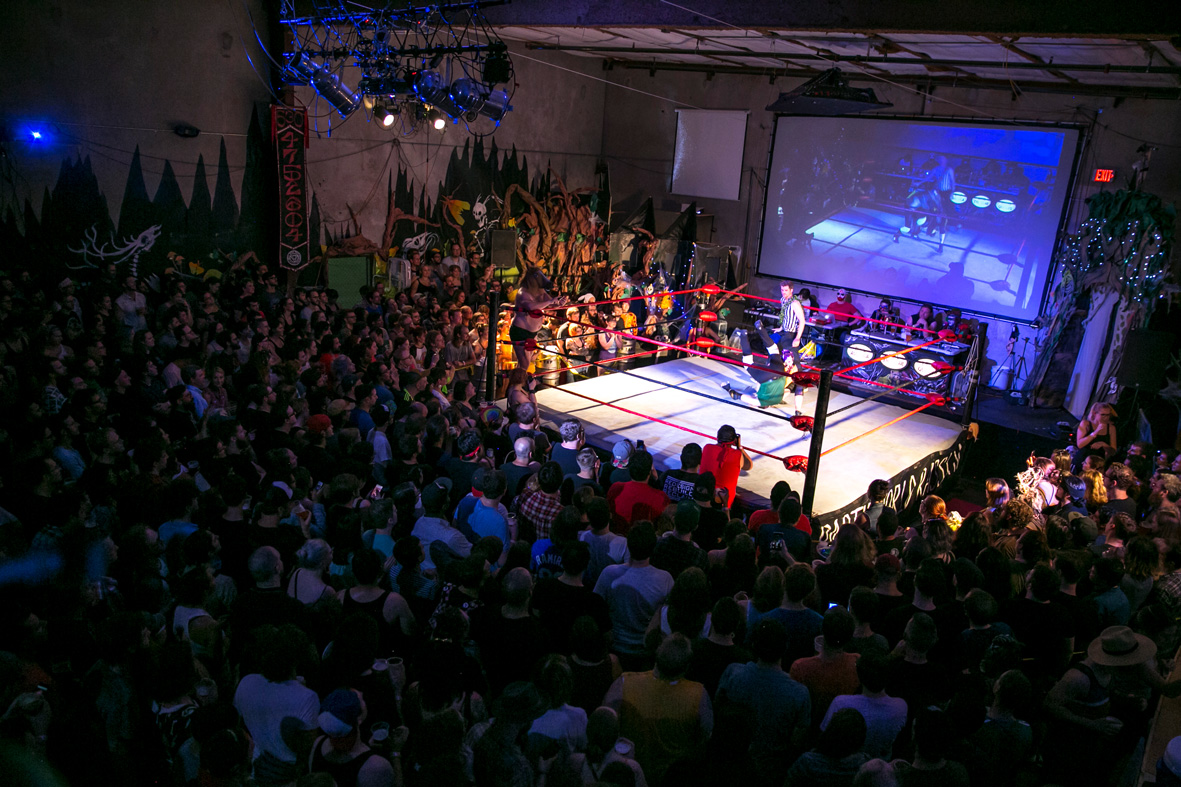 Slamhain IV, The Brawl of the Wild and other PWR events take place in the back room of a brewery in north Austin in front of a crowd that can number 2,000 fans. 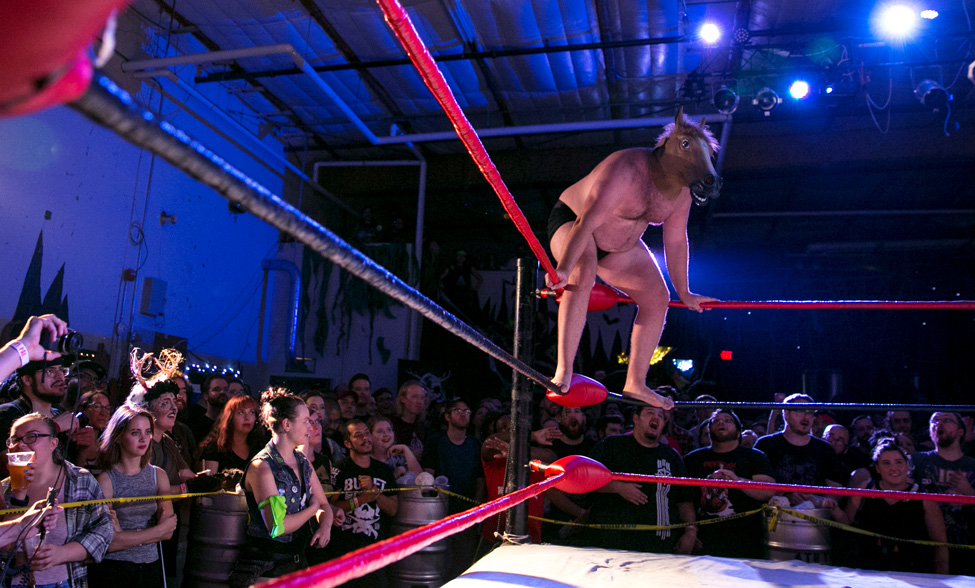 Jake Galgon aka "Bench Horse" prepares to jump from the second rope during a PWR event. 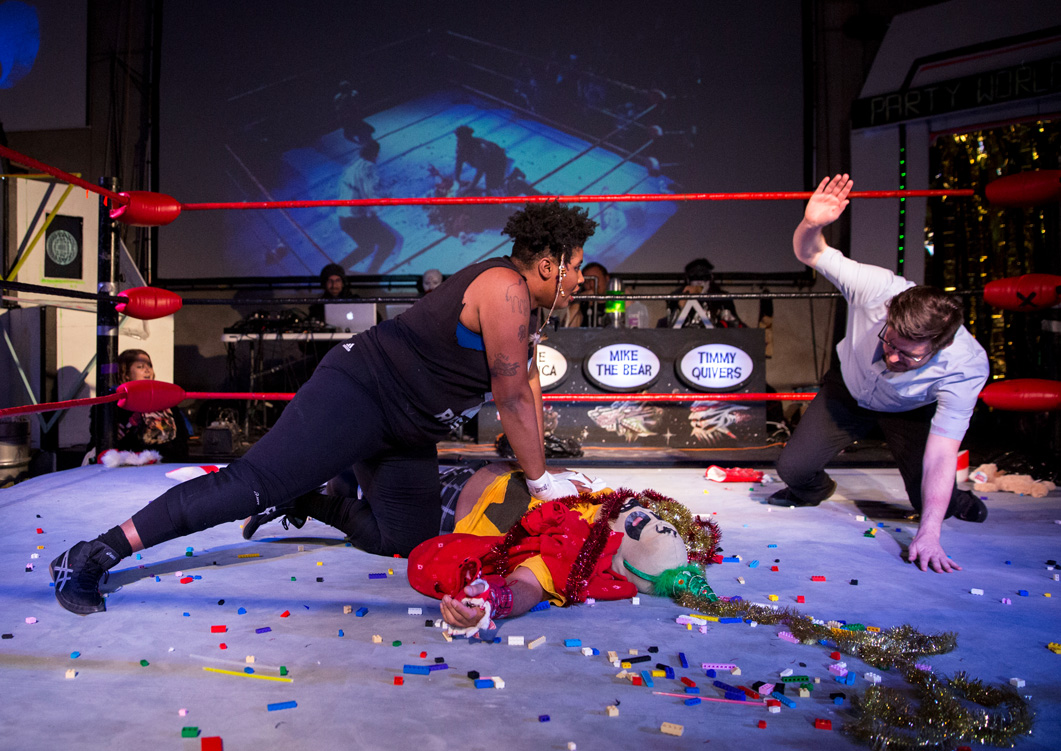 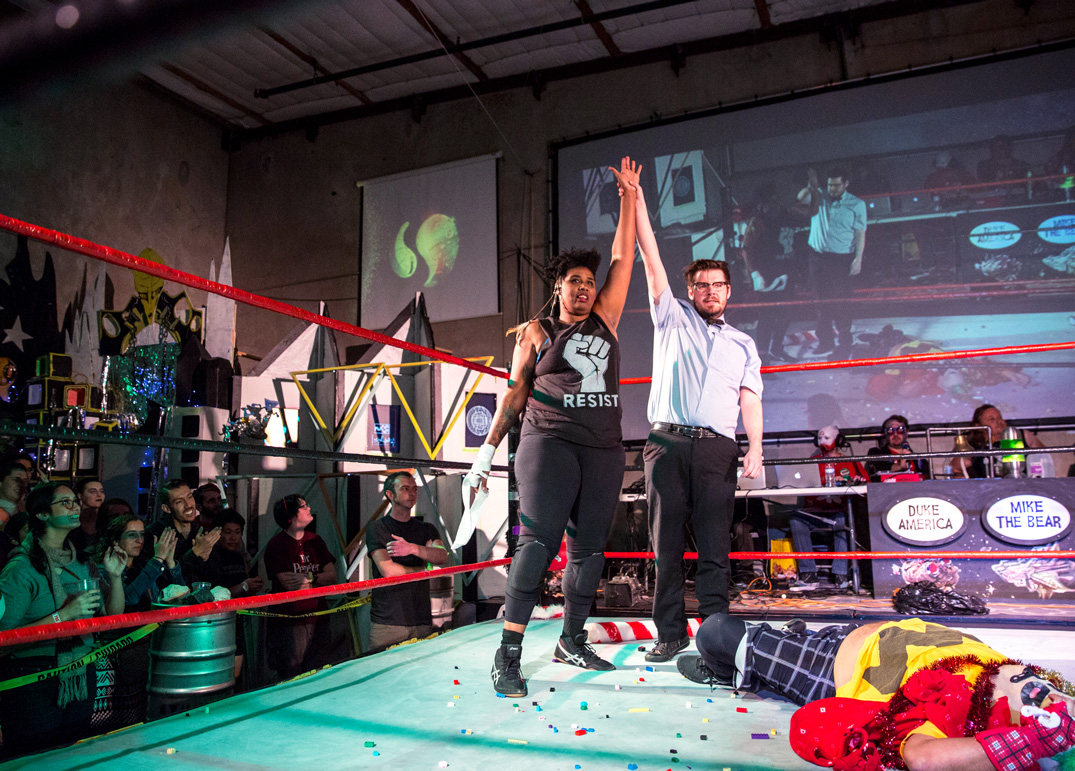 Referee Devin O'Brien holds Chiquita Smith's hand in the air after she wins her match at PWR's Space Slam.