When high tides during the spring equinox crash into slower-moving water in Brazil's rivers, a natural phenomenon called a tidal bore -- or a pororoca in Portuguese -- is formed. The resulting wave can rage for dozens of miles, ripping out trees, spewing out mud and even dragging caimans along with it.

While locals live to respect the pororoca, knowing full well it could smash through their dock or turn their boat into a million wood chips, local surfers such as Serginho Laus live to ride it.

"It's a feeling of freedom, it's a feeling of discovery," Laus said. "You are in a place that nobody goes: Everybody is afraid to go because the pororoca looks like a monster for the locals who live around this area. It's like an Amazonian tsunami."

It's easy to see why surfers love it so much. Unlike ocean breaks that last maybe 30 to 40 seconds, the pororoca can be ridden for as long as the surfers can handle the intense lactic acid buildup in their legs. There's an extra incentive to stay up longer: hungry piranhas and blood-sucking candiru catfish, known as "vampire fish," lurk below.

Laus formerly held the world record for the longest tidal bore surf, at 33 minutes, 15 seconds, and says he once rode the pororoca nonstop for 1 hour, 10 minutes. He forgot the GPS tracker to validate the record.

But in 2014, everything changed. The pororoca at the mouth of the Araguari River -- where Laus had been riding since the late 1990s -- disappeared.

"When the Araguari died, the dream died, too," Laus said. "Imagine, you've always been in the place that you desired to be with the best waves in the world -- and just in a moment, you don't have that place anymore."

While other surfers went hunting for new river monsters around the world, Laus chased another pororoca in Brazil -- this time, on the Amazon River. He spoke to riberinhos, people living along the river, and found exactly what he was looking for.

So Laus gathered his local crew and invited Brazilian stand-up paddleboarder Ivan Moreira and his surfing dog, Bono. Together, they sailed 15 hours into the Amazon, past punishing rains and curious villagers, to meet the monster head-on -- a new record keenly in their sights. 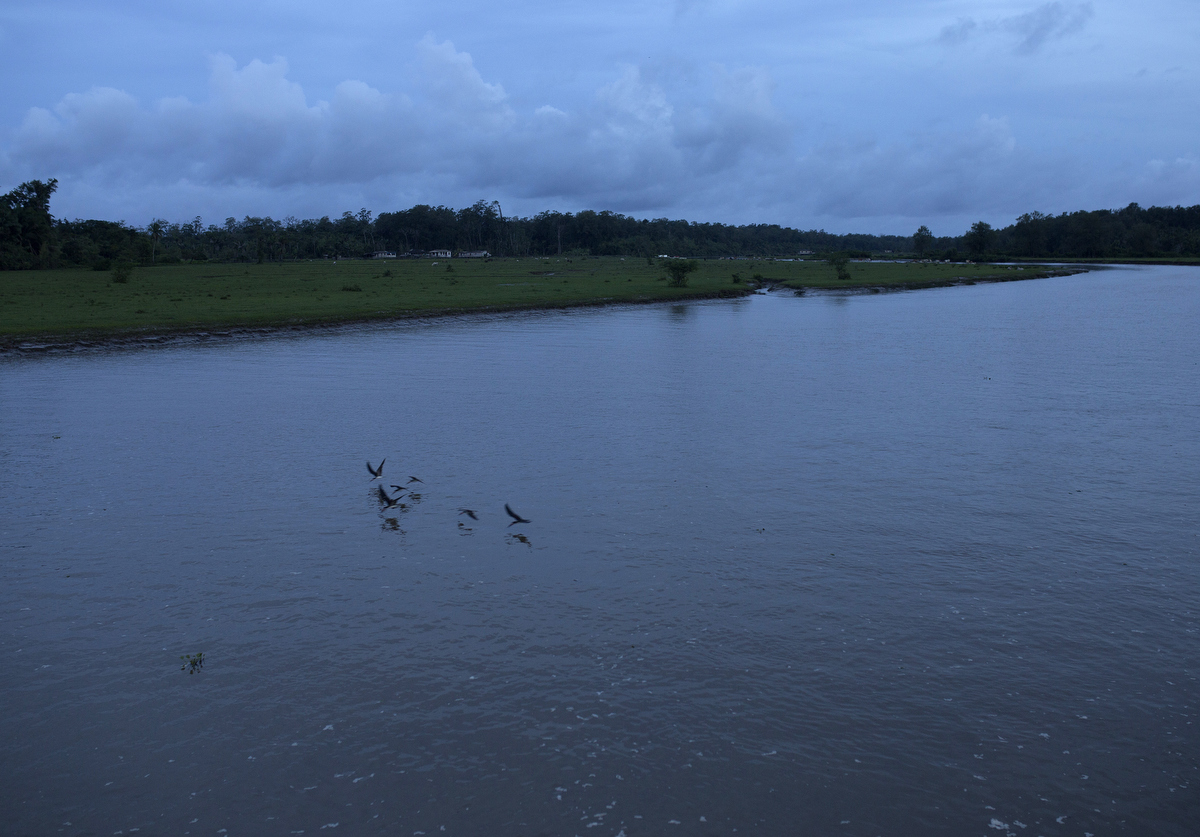 Chirps and howls ring out as the Amazon wakes up for the night. The next morning, the mighty pororoca will rage by this tranquil part of the river. 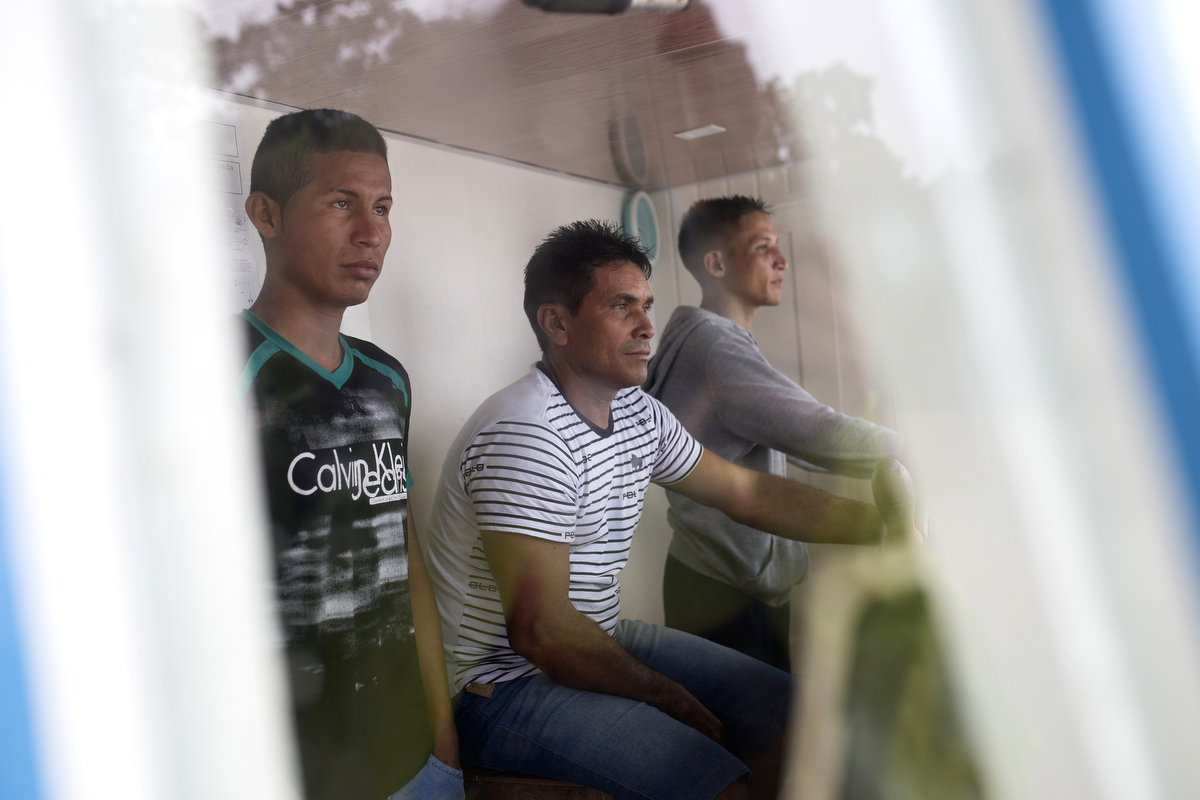 From left, crewmembers William Marques, José Edivalgo and Bruno Lima helm the vessel during the 15-hour trip from Macapá, the capital of Amapá state. Surfing the tidal bore is far more complicated than a day at the beach. A surfer needs a crew of pilots, a large boat, at least one personal watercraft and -- most importantly -- the expertise to predict when the bore comes and where the best point of entry is. 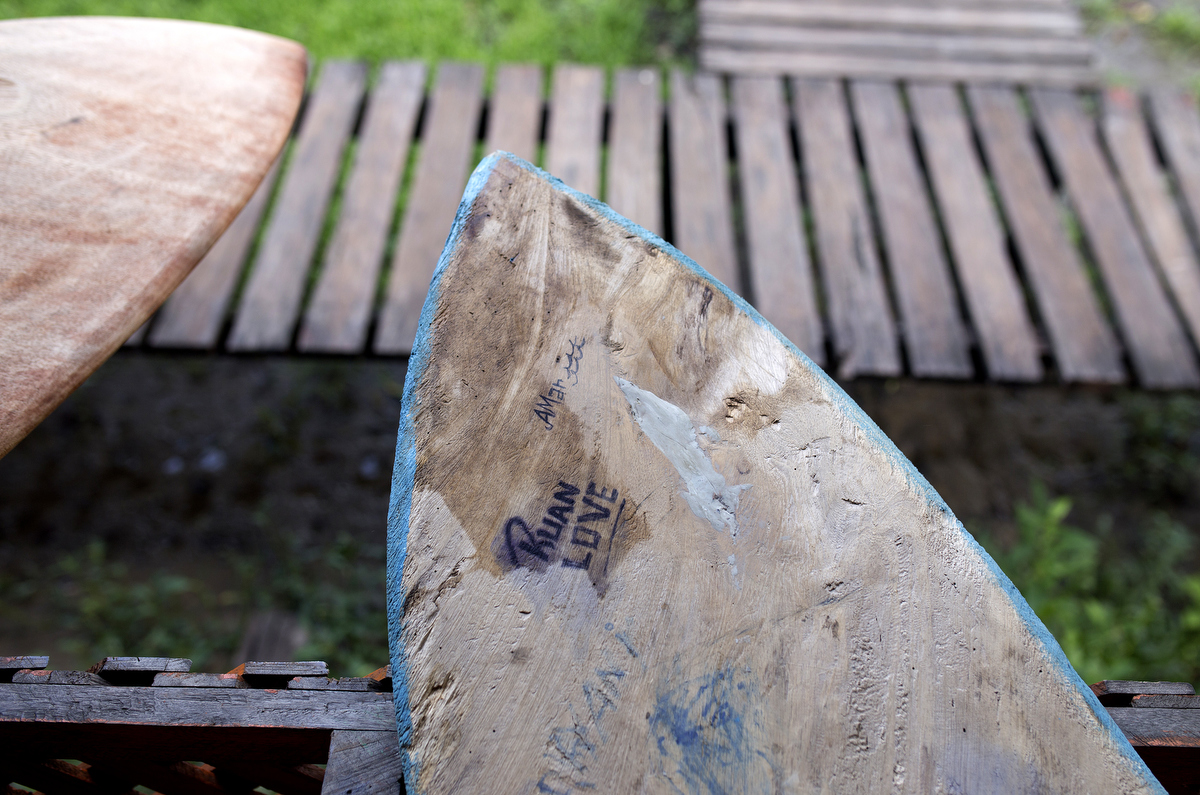 These homemade surfboards, crafted from local Madeira trees, belong to local riberinhos Ruan Maciel Borges, 19, and Farias Mendes, 26. They made the boards using the outline of a surfboard that Laus gave their cousin Athieson Almeida Farias in 2017, then 16 years old, after seeing him ride the pororoca on a refrigerator door. 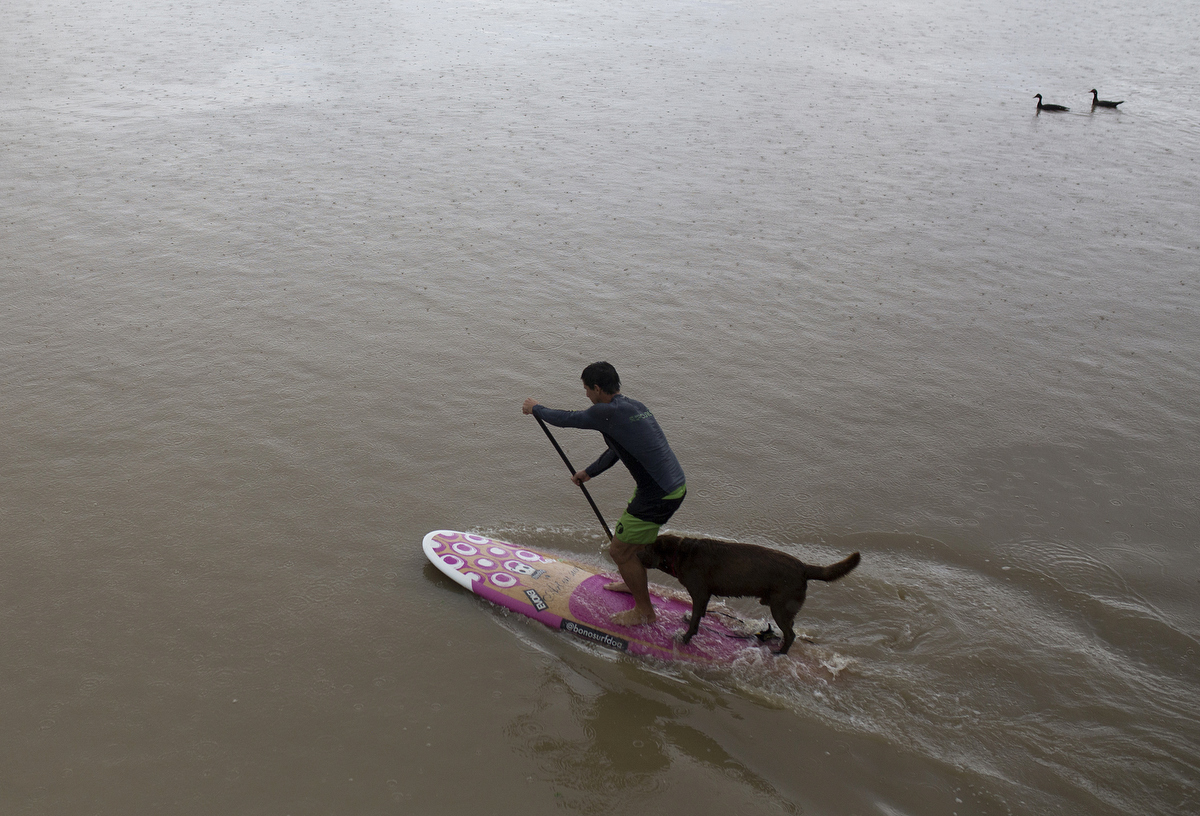 Moreira and his dog, Bono (named after the Brazilian cookie brand, not the U2 frontman), practice the afternoon before riding the pororoca. Moreira and Bono have competed at the World Dog Surfing Championships in Huntington Beach, California. They also set a Guinness World Record for the longest SUP ride on a river bore by a human/dog pair when they rode together for a mile in the Brazilian state of Maranháo in 2016. They plan to set a new record in the Amazon. 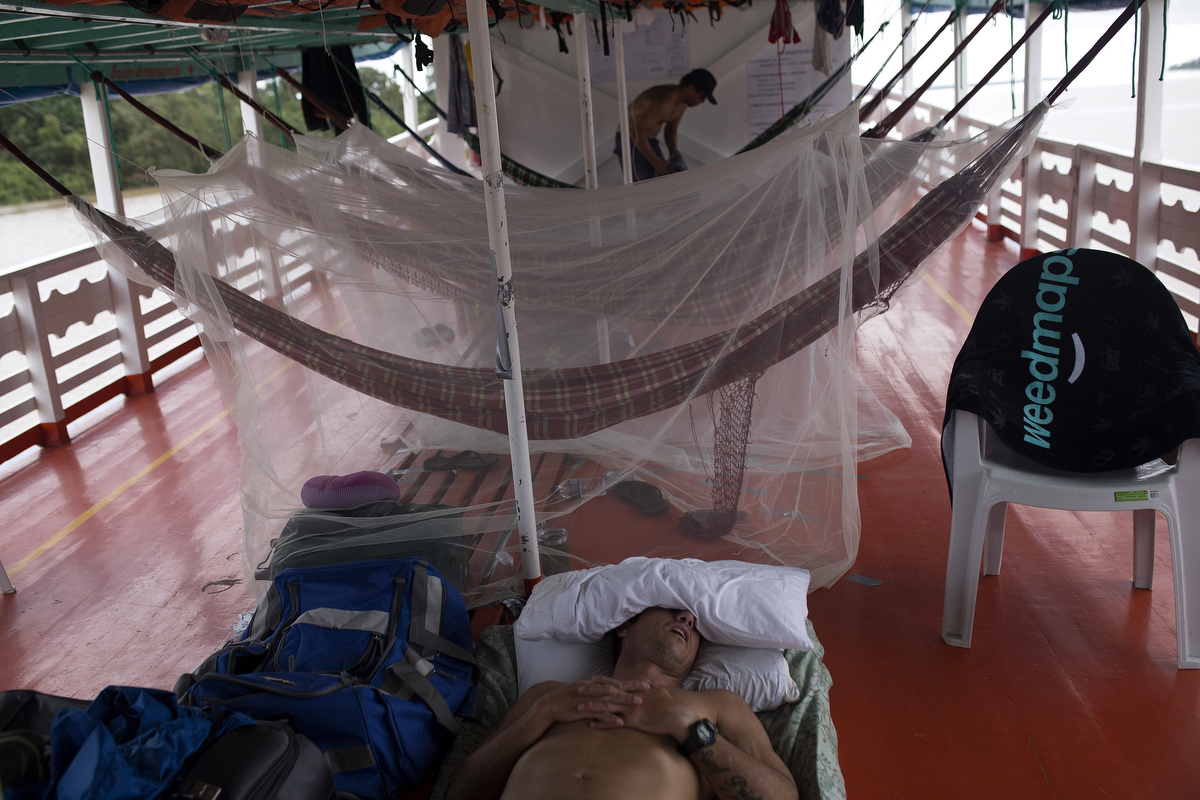 An early start and a long ride on the pororoca left Moreira in need of a nap. Moreira, a personal trainer, competitive surfer and black belt in karate and jiu-jitsu has been followed by a Brazilian TV crew as he surfs with Bono in places such as Hawaii, Miami, Peru and Chile. Behind him, mosquito nets cover hammocks to keep out large insects at night. 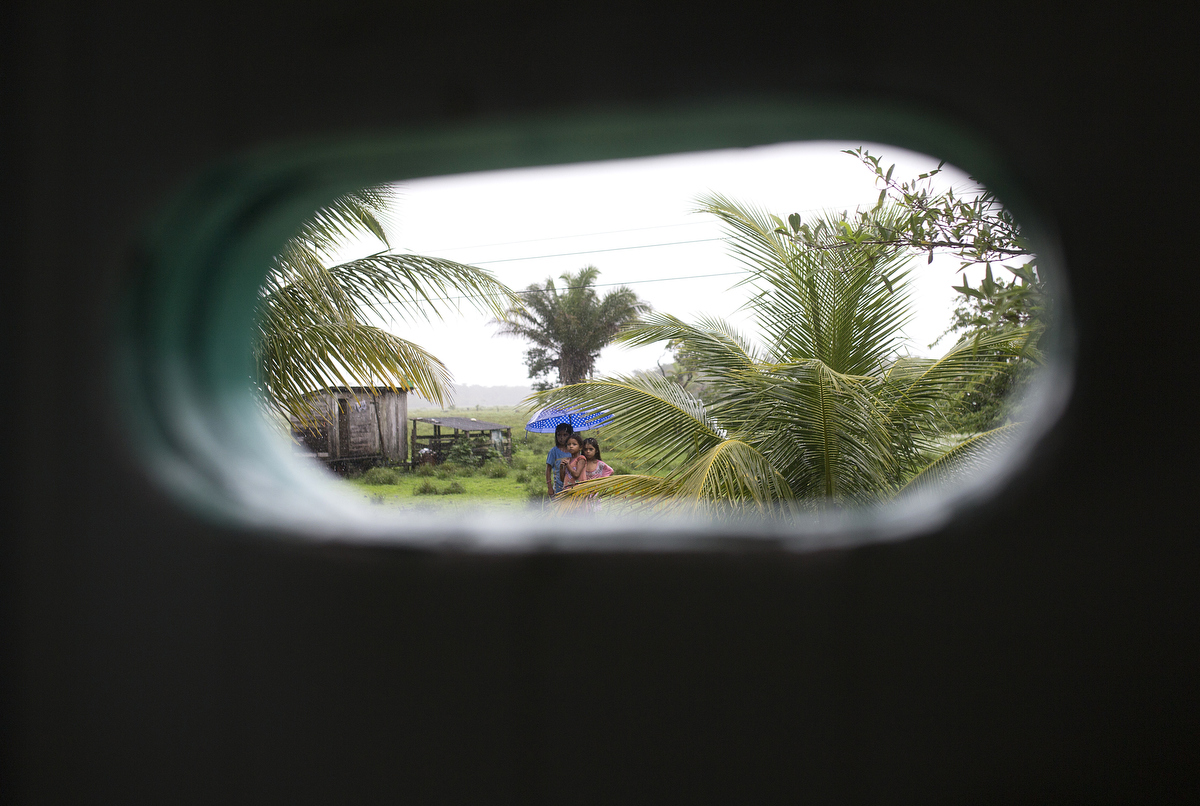 Three girls from the village of Igarape Grande look at the surfing expedition's boat in the rain. Rain poured down for the majority of the four-day expedition. 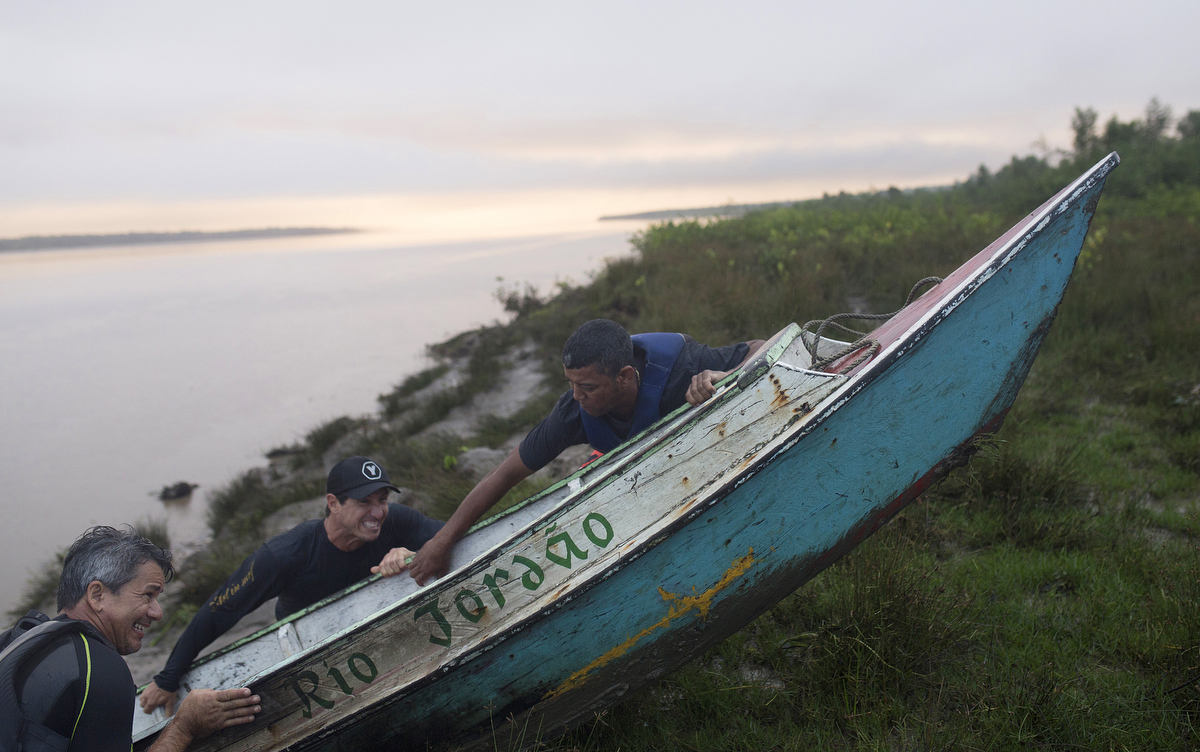 Moreira, center, helps crew members Marcio Pinheiro, left, and Marcio Vitello, right, haul the boat up to shore before the pororoca hit. If left on the river, the tidal bore would likely rip the boat to shreds. 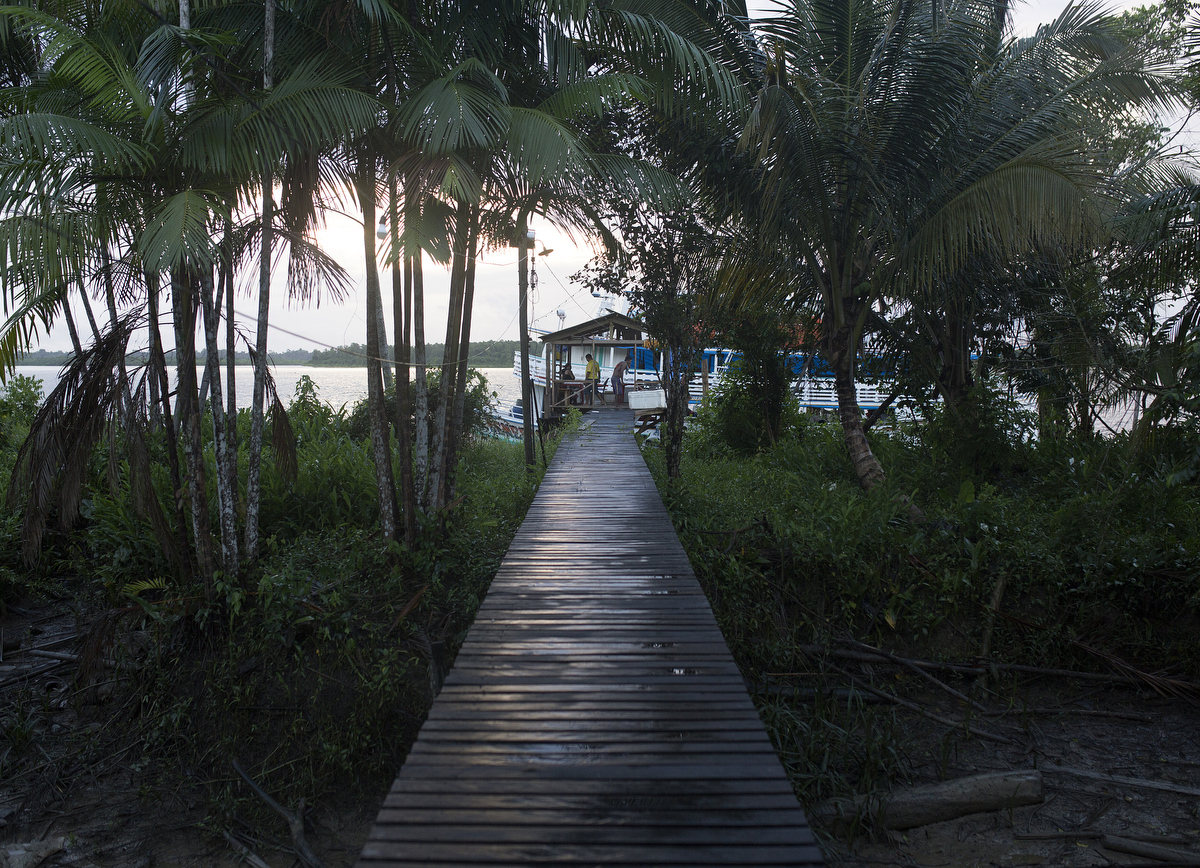 The boat stopped in the village of Porto Fábrica to pick up some acaí, the Brazilian superfood that's sold across Brazil and increasingly around the world. Villagers living on the banks of the Amazon River usually live in houses built on stilts due to drastic water-level changes. 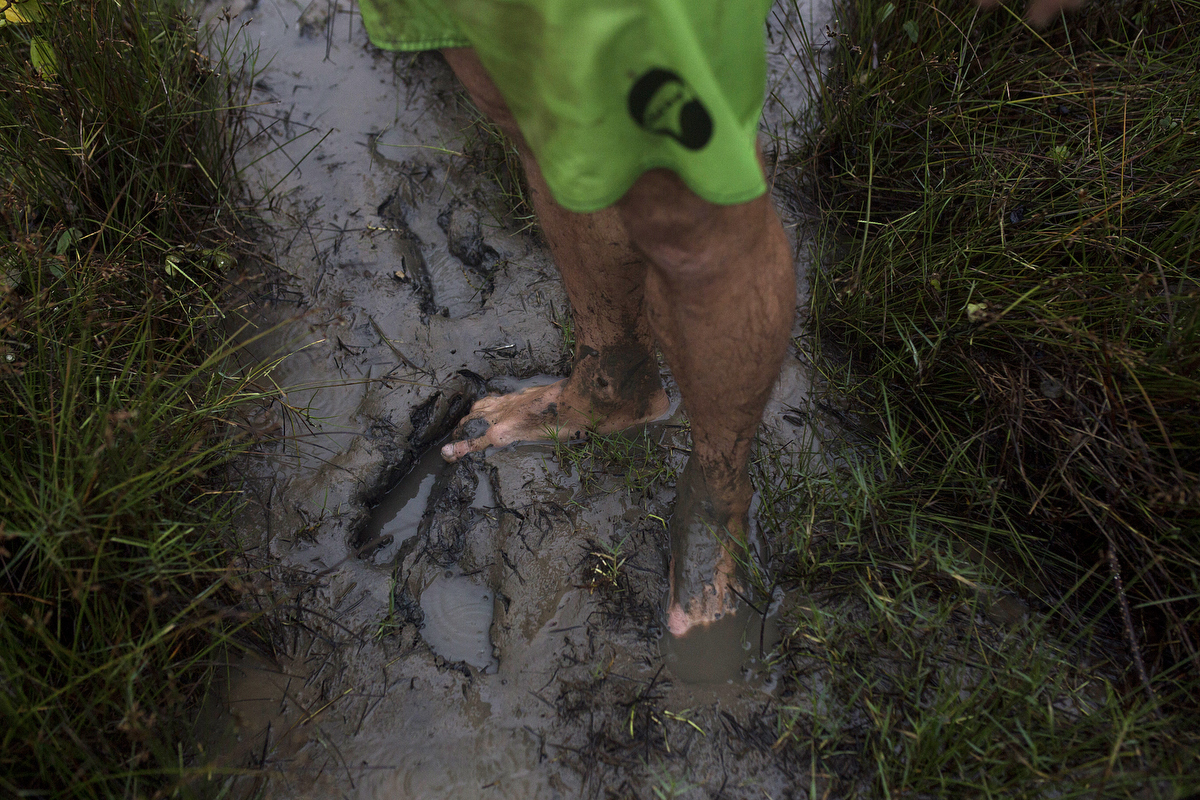 Moreira's feet are submerged in thick mud on the banks of the Amazon River. He's just minutes away from riding the pororoca. 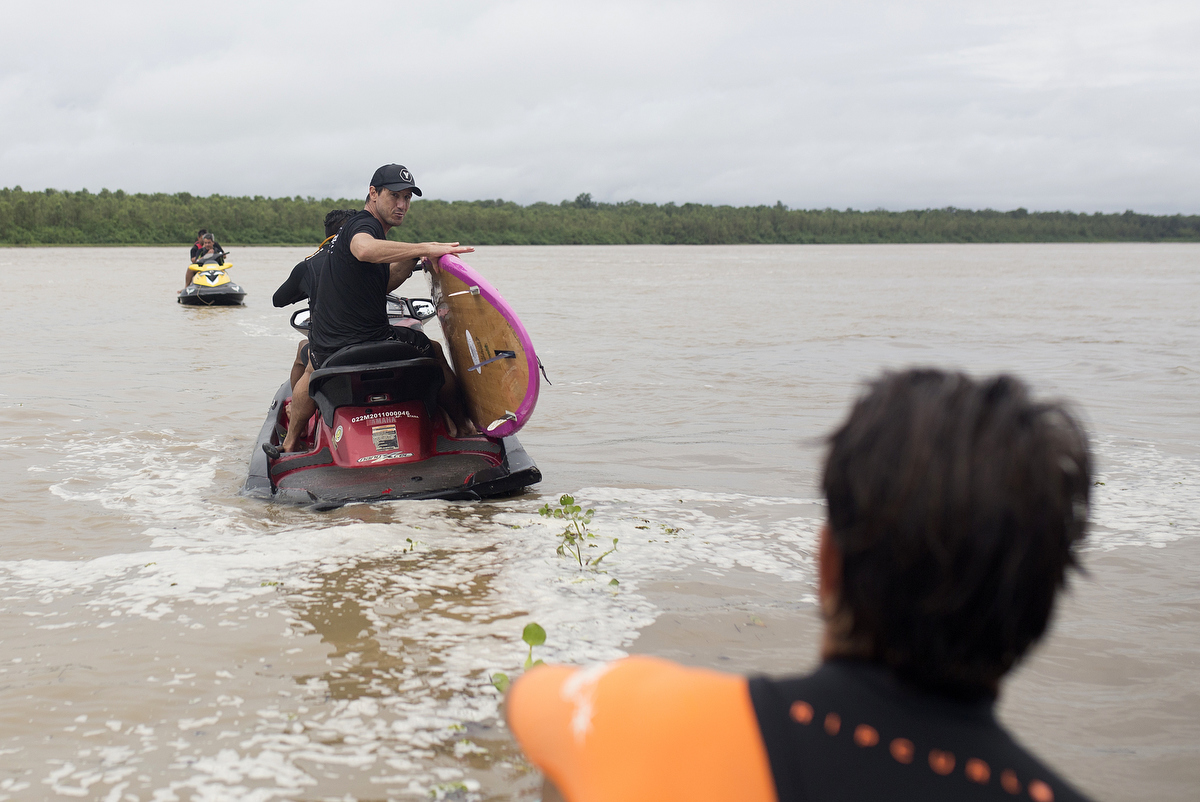 Moreira rides out with his stand-up paddleboard to take a shot at the pororoca. Moreira learned to surf from his father when he was 5 years old, but he taught himself stand-up paddleboarding when he started riding with his dog only seven years ago. Unlike most other surf dogs, Bono prefers to sit on the tail instead of the nose, so Moreira needs the paddle to maneuver the wave. 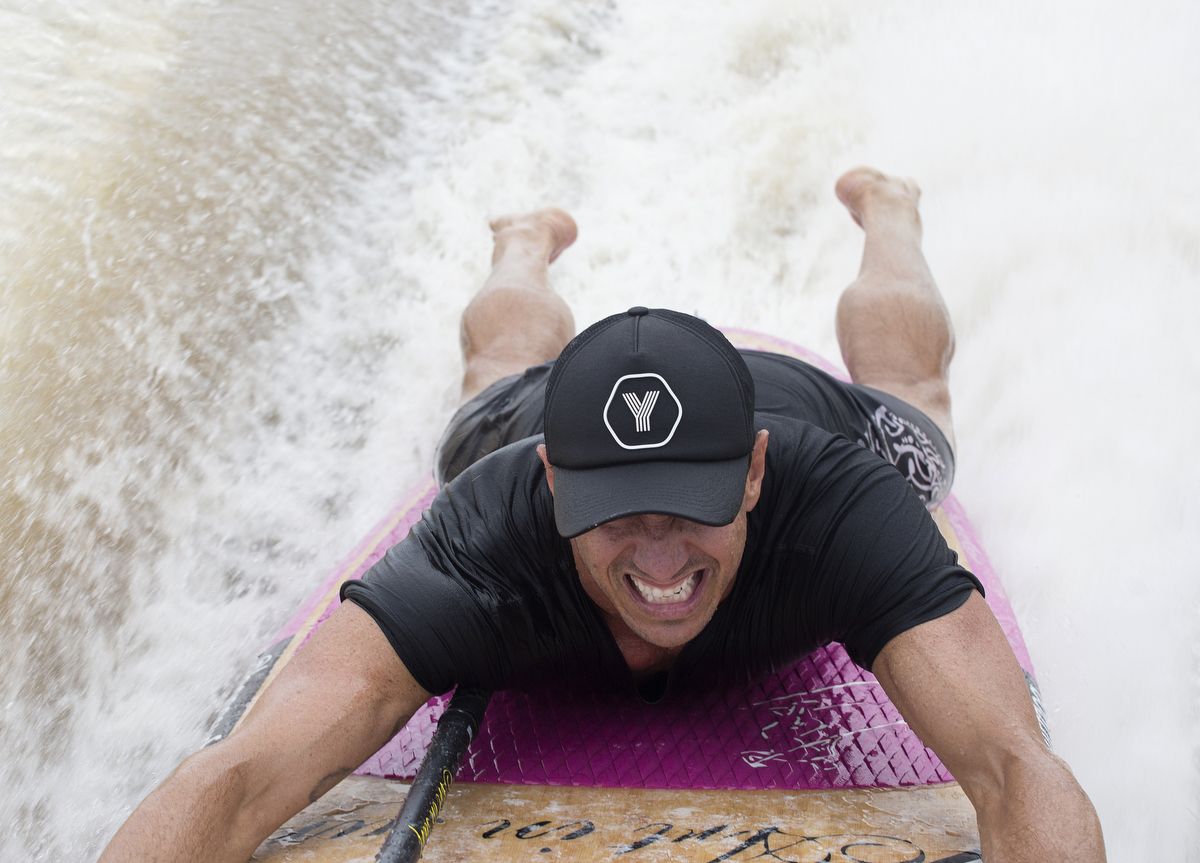 Moreira hangs on to his board as a PWC pulls him to catch up with the pororoca after riding a major swell for about nine minutes. "The white water was too big, so I couldn't make the turn, and [Serginho] Laus whistled, 'Jump.' And I grabbed Bono, and I just jumped." 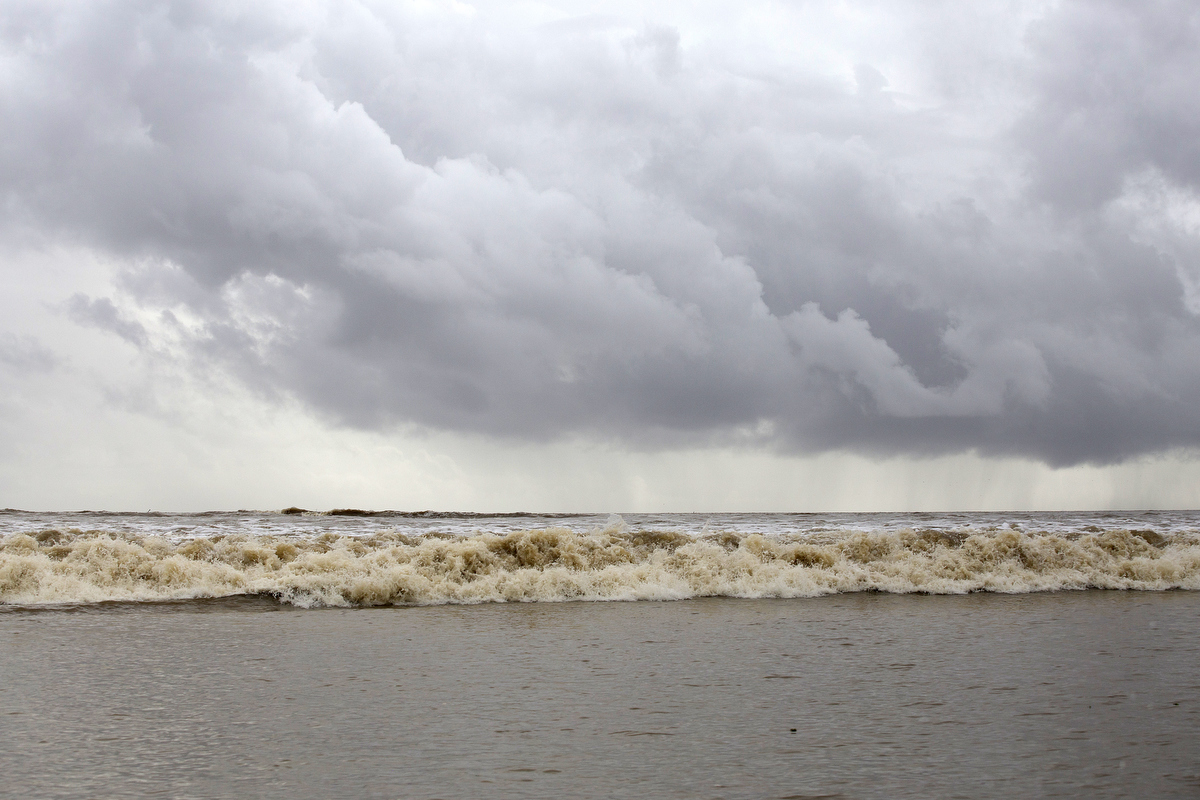 The calm Amazon River water is enveloped by a raging, tidal bore wave that reached as high as 6 feet. Tidal bores also roar in places such as England, France, Canada, India and China. 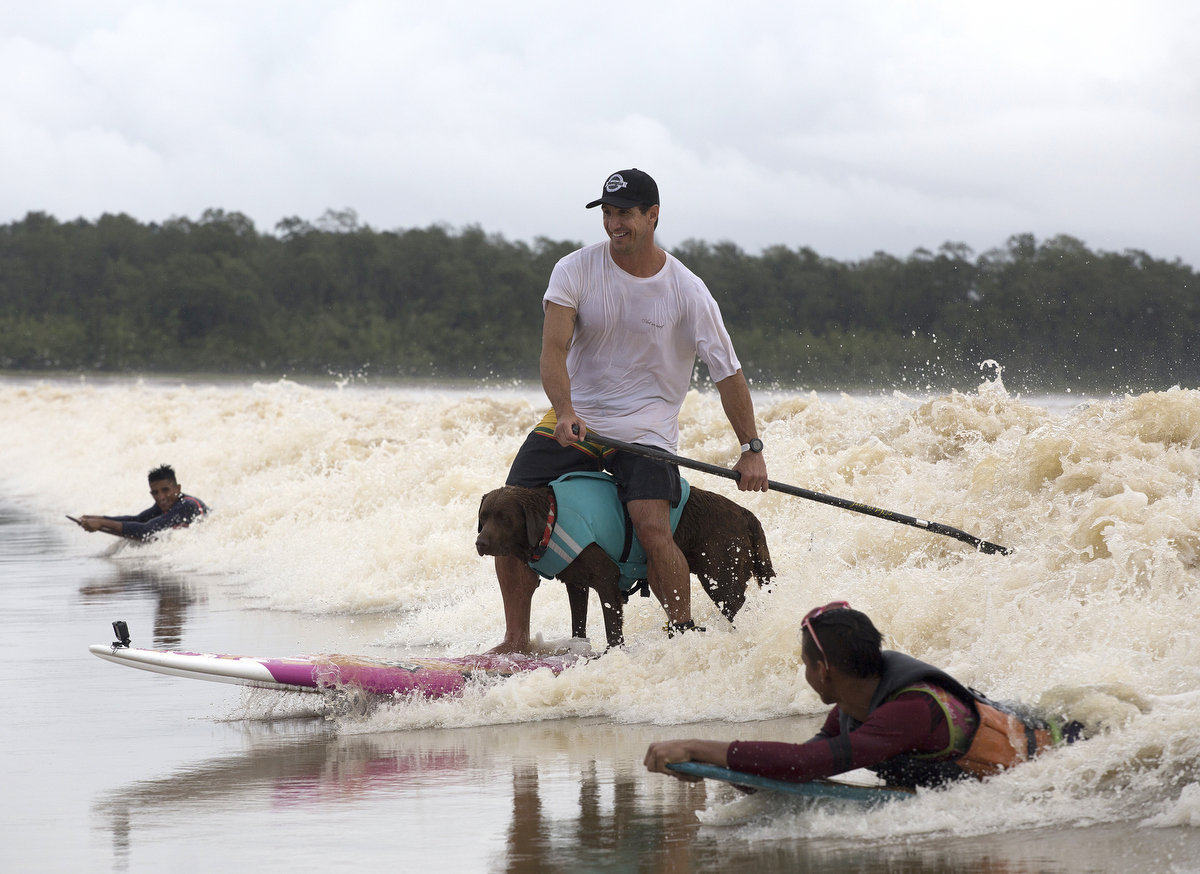 Moreira and Bono stand-up paddleboard the pororoca in between locals Valdinei Farias Mendes, left, and Ruan Maciel Borges, right. The young locals recognized Moreira and Bono from Brazilian public access TV. "It was cool!" Mendes said in Portuguese after bodysurfing the wave for several minutes. "Heart was pounding the whole time, adrenaline rushing down your body. All you have left to do is enjoy it." 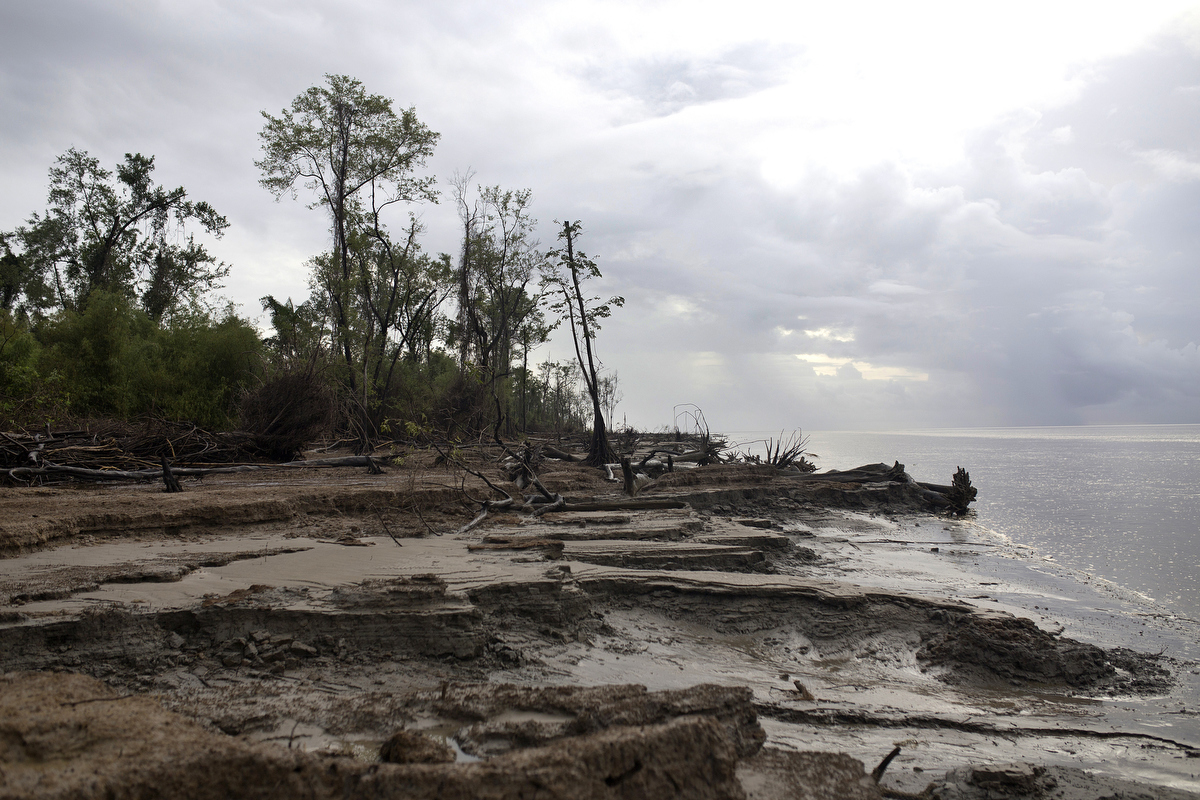 Uprooted trees and eroded soil at the mouth of the Amazon River are signs the pororoca ravaged through here. Laus said pieces of wood and bamboo sticking out of the wave like death traps had him "a little bit scared" for Moreira and Bono's safety. 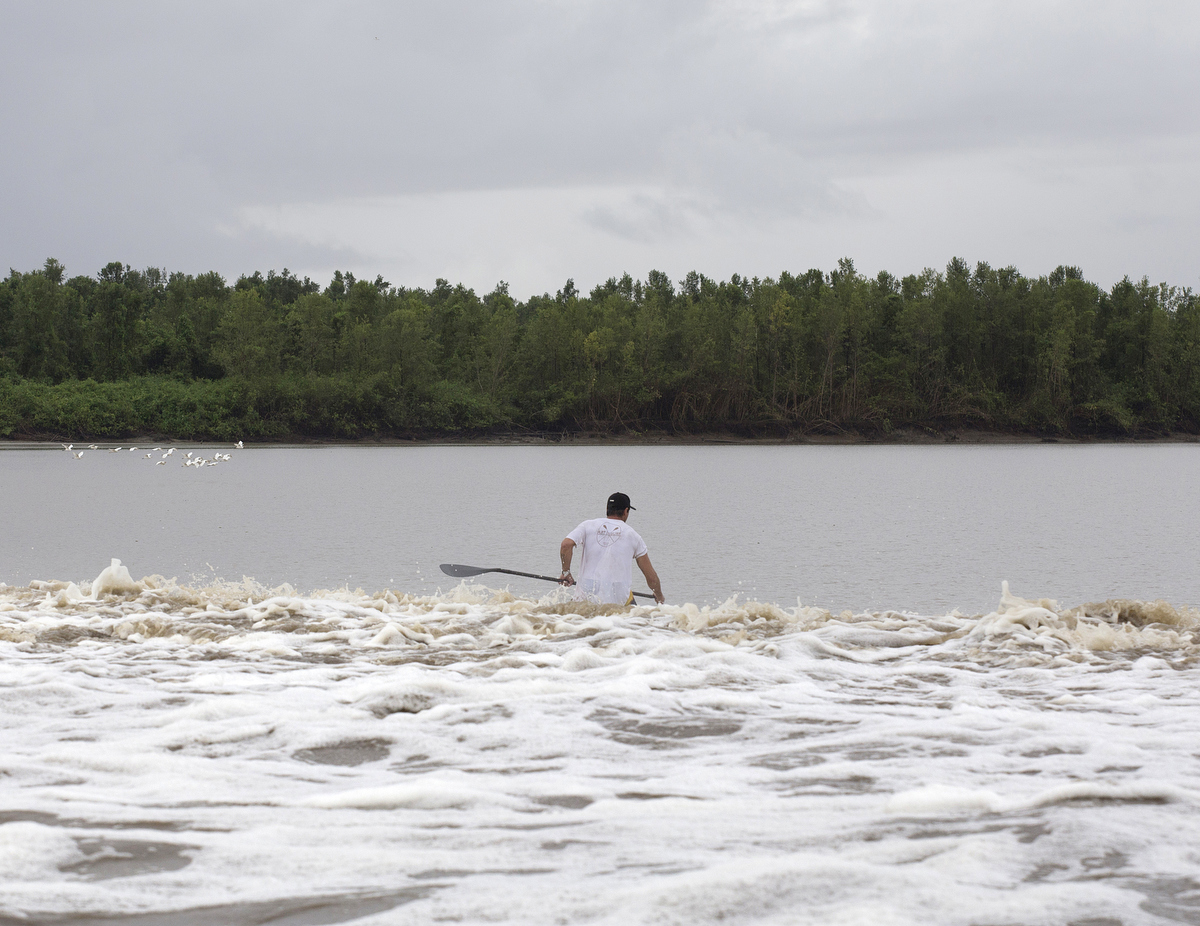 Moreira and Bono surf the tidal bore wave. Together, they rode 6.47 miles over 33 minutes, 7 seconds -- enough for a new (yet to be confirmed) Guinness World Record. 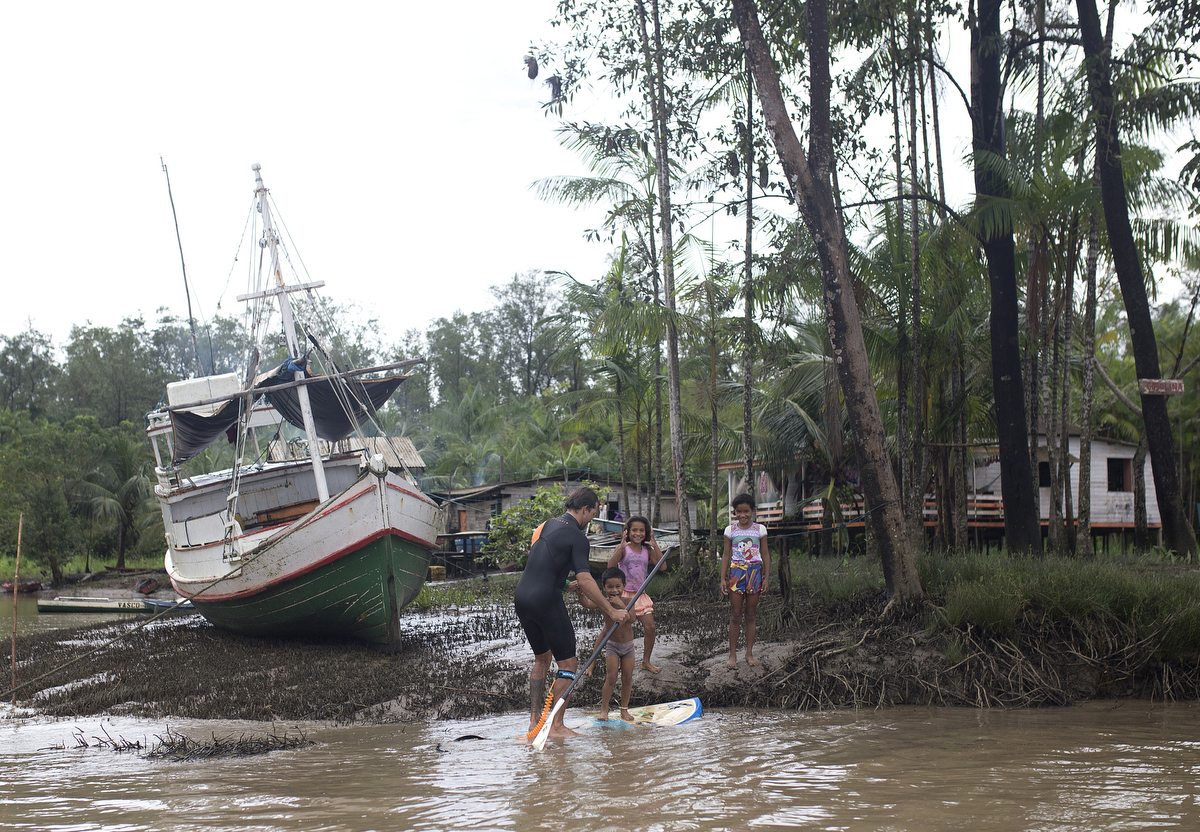 Laus plays with local kids after riding the pororoca. "The people that live around here start to live the feeling of the surf," Laus said. "They start to look at the sport of surfing with different eyes -- that they can do it, too." 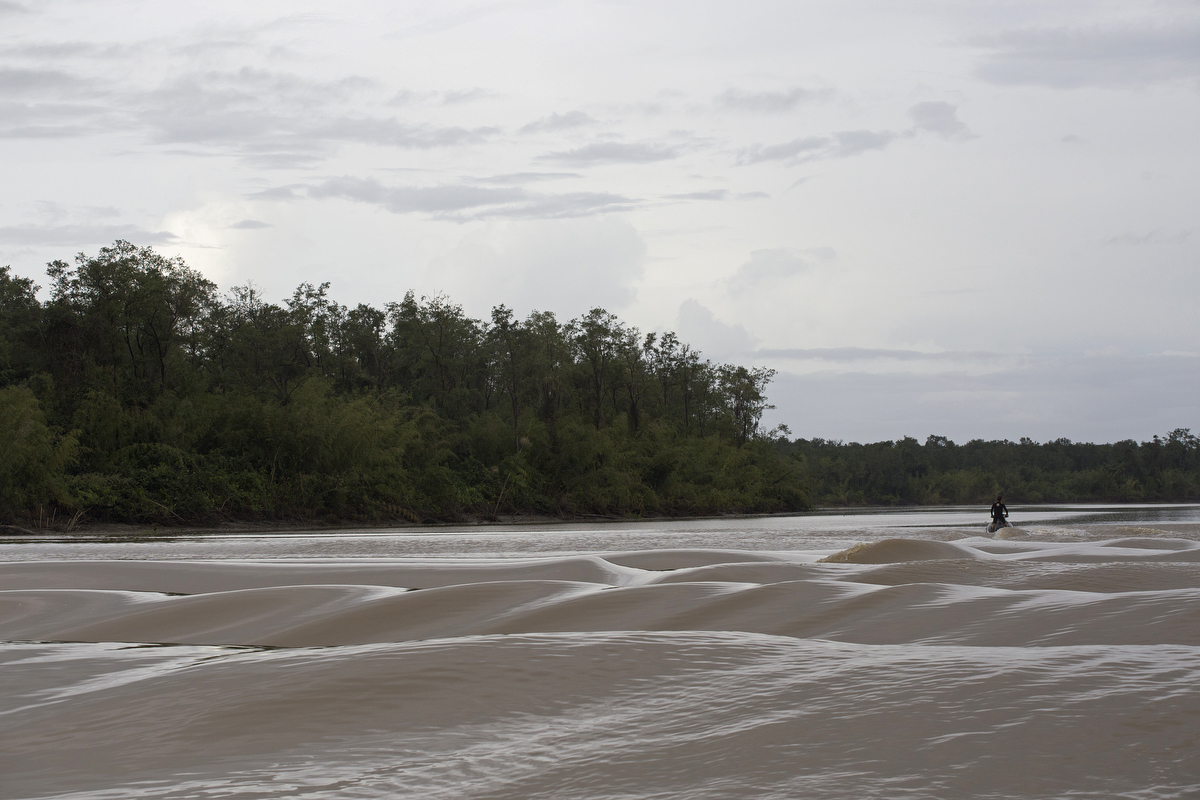 Laus rides back to the boat as waves bounce around the Amazon River in the tidal bore's wake. The pororoca is just a single wave -- if you miss it, that's it. 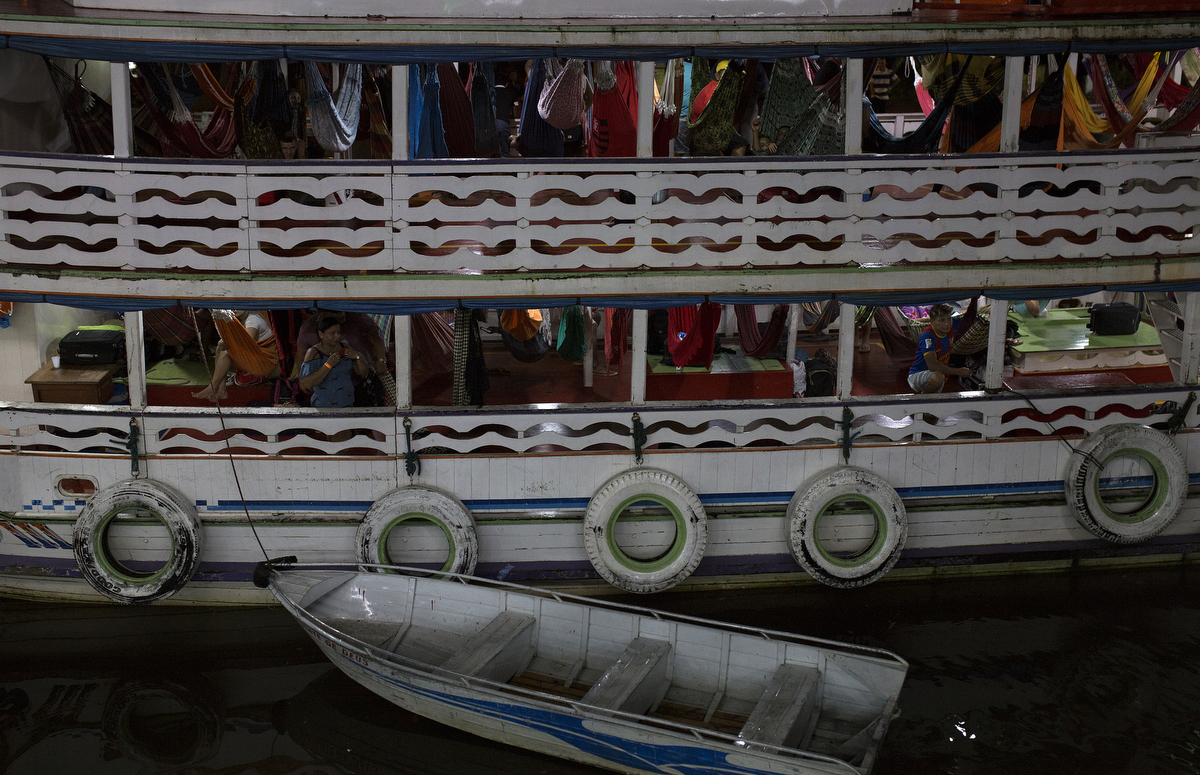 Riverboats like this one leaving from Macapá serve as a fun vacation for locals. This boat was crammed with far more hammocks than the surfing expedition's and came equipped with a kitchen, bar and a radio with blaring music. 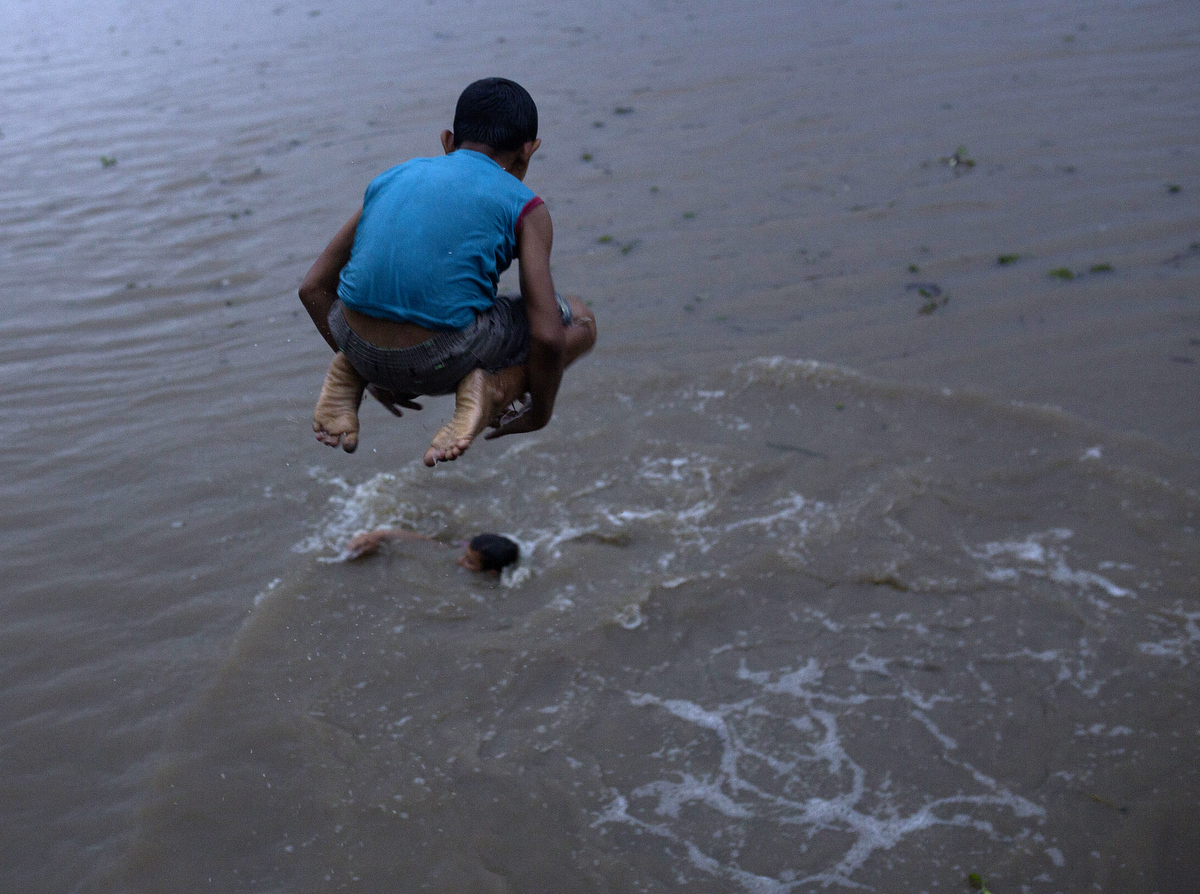 Davidson Ferreira, 8, cannonballs into the Amazon River off the dock in front of his house. "Here, we learn how to live with Mother Nature," Laus said. "We learn how to eat good food, how to live simply and how to make good friends -- and how to burn your legs surfing for miles and miles." 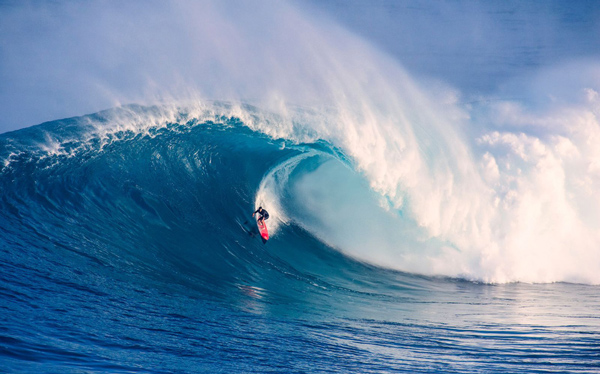 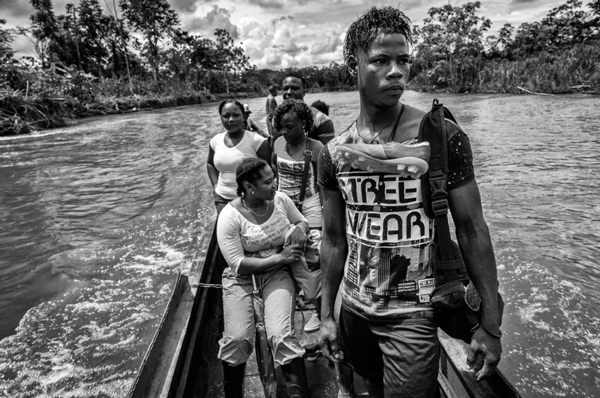 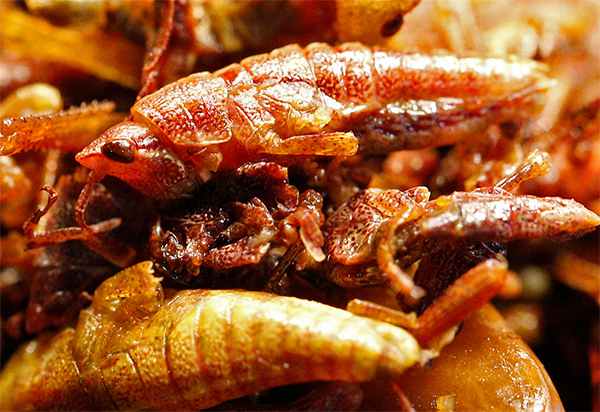 A side of Grasshoppers 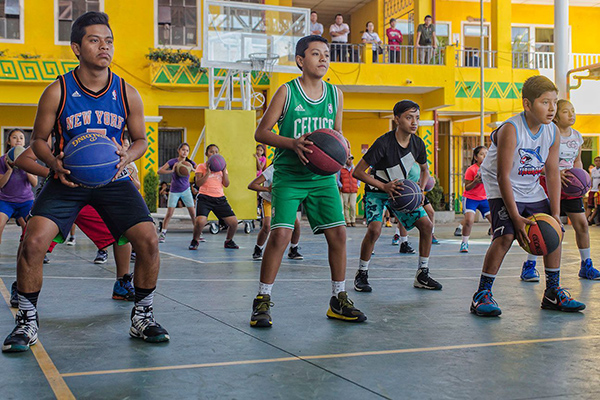