It's 11 p.m. on a Wednesday, and Tasha Otieno sits in her boyfriend's home in a densely populated neighborhood in Nairobi. She has just returned from hockey practice.

The walls are painted lime green, the room smells of tea and ugali -- a cornmeal porridge that is a staple in East Africa -- and the only light comes from a TV in the living room. The game is on -- again. It's the 2010 Olympic women's hockey gold-medal match, streaming on YouTube. Canada versus the United States.

The 23-year-old is glued to the screen, screaming at the refs as though she hadn't already watched the game a dozen times before. "Their passes are so sure!" she says, in awe of the teams' abilities.

Tasha is not alone in Kenya when it comes to a love of hockey. She is one of five women who play on the Nairobi Ice Lions, East Africa's sole ice hockey team.

As the country enters the final stages of creating the Kenyan Ice Hockey Federation, plans are in the works to build a men's national hockey team. But where does that leave the women?

Right now there are not enough players to support a women's team, but that doesn't stop Otieno and her teammates -- Carroll Joseph, Alexcy Wambui, Faith Wambui and Faith Sihoho -- from making big plans. "I think one day you will see Kenyan women playing hockey at the Olympics," Carroll says. "When we were little, there were no women playing ice hockey in Kenya that we could look up to. We want to be those women for the next generation of Kenyan girls." 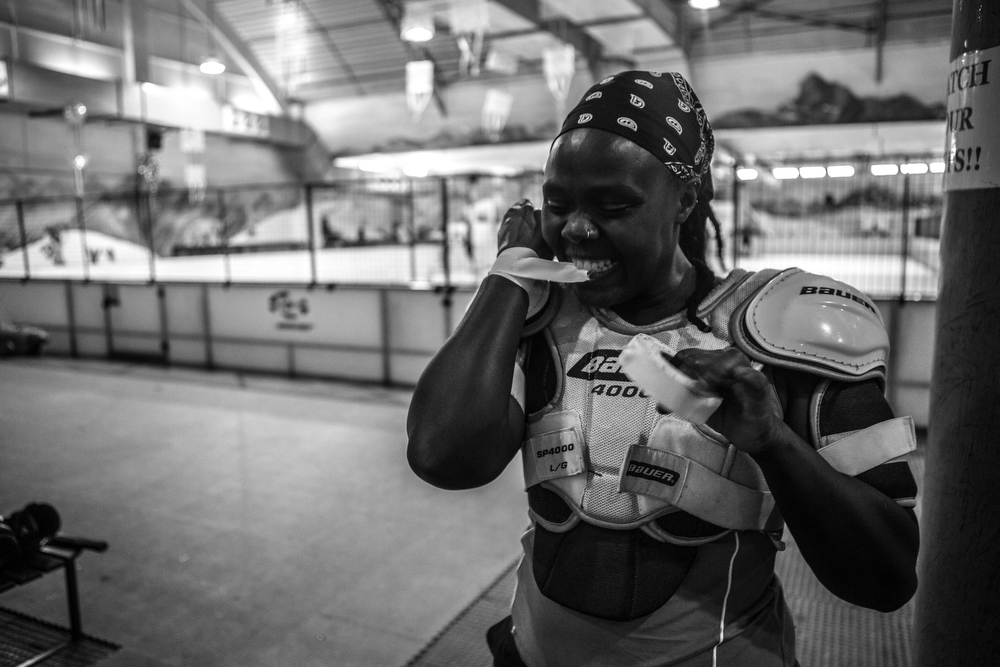 The rink in the Panari Hotel in Nairobi is the only one of its kind in East Africa, and its primary use is as a leisure skating rink for foreigners. Alexcy and the Ice Lions have permission to use the rink twice a week. 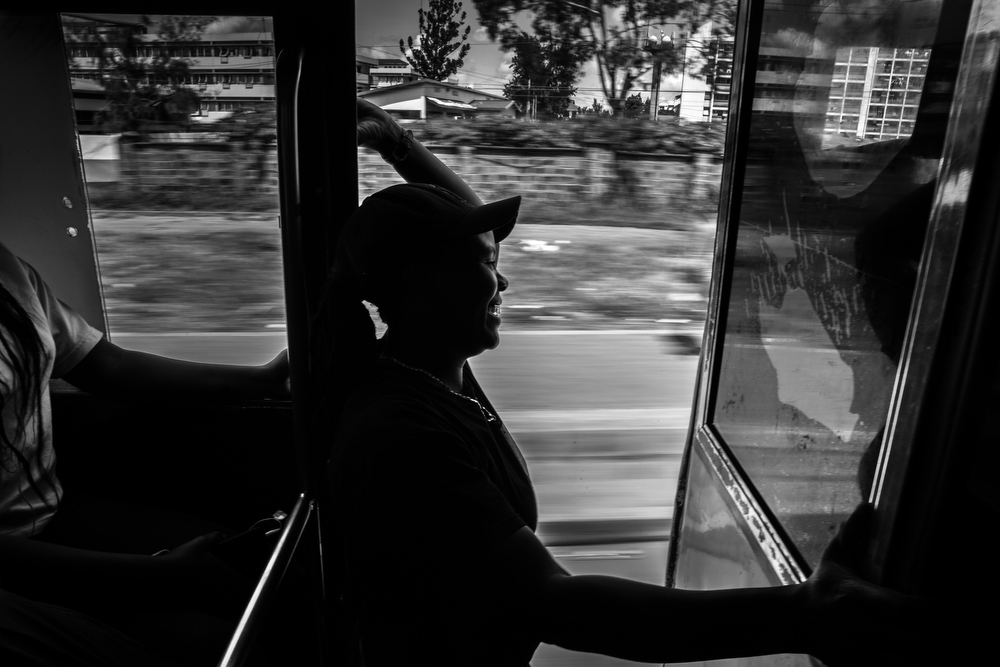 Alexcy's day job is a matatu fare collector. She hangs out of the bus' door and bangs on the side to let passengers know they are going to stop. 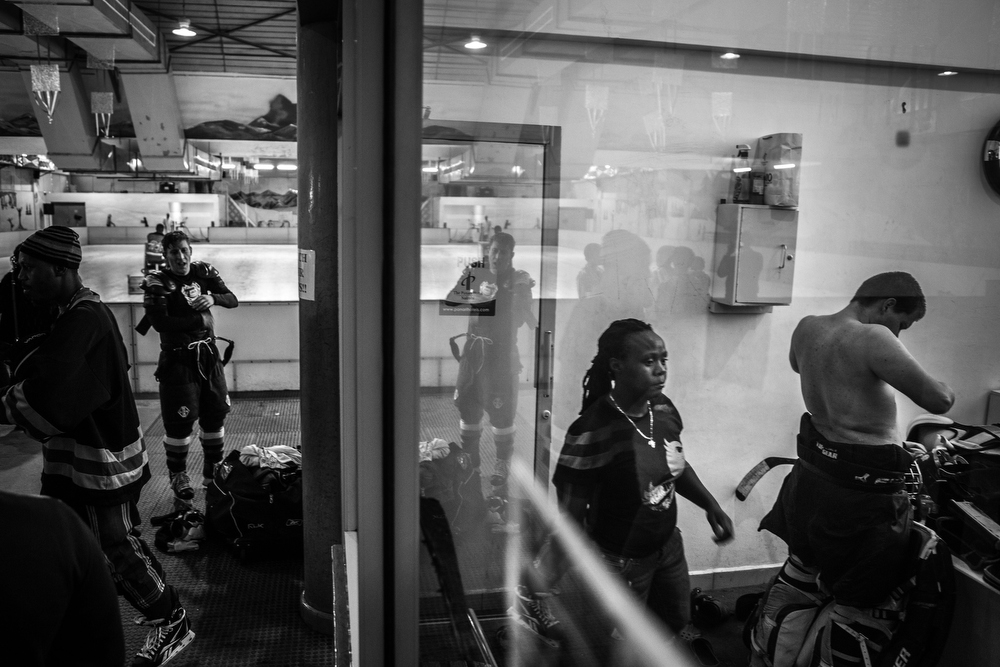 Alexcy enters the only dressing room as a goalie from Russia prepares for the day's scrimmage. Non-Kenyan players pay for ice time, and that payment allows for the Ice Lions to play for free. 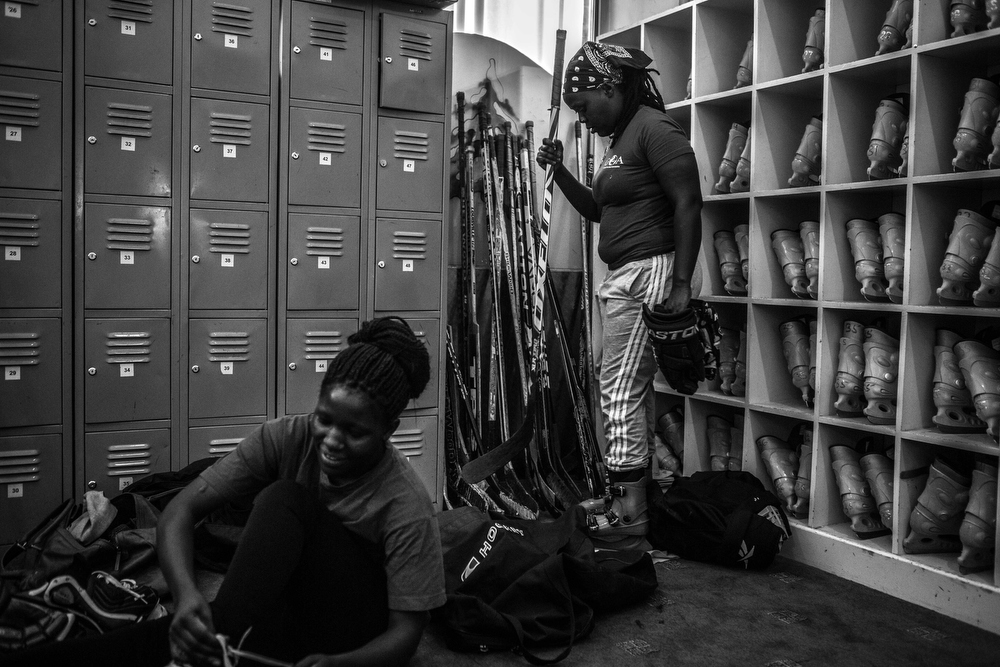 Alexcy is having a hard time finding a usable stick. They are hard to come by, as most have been donated and often have worn-down blades. 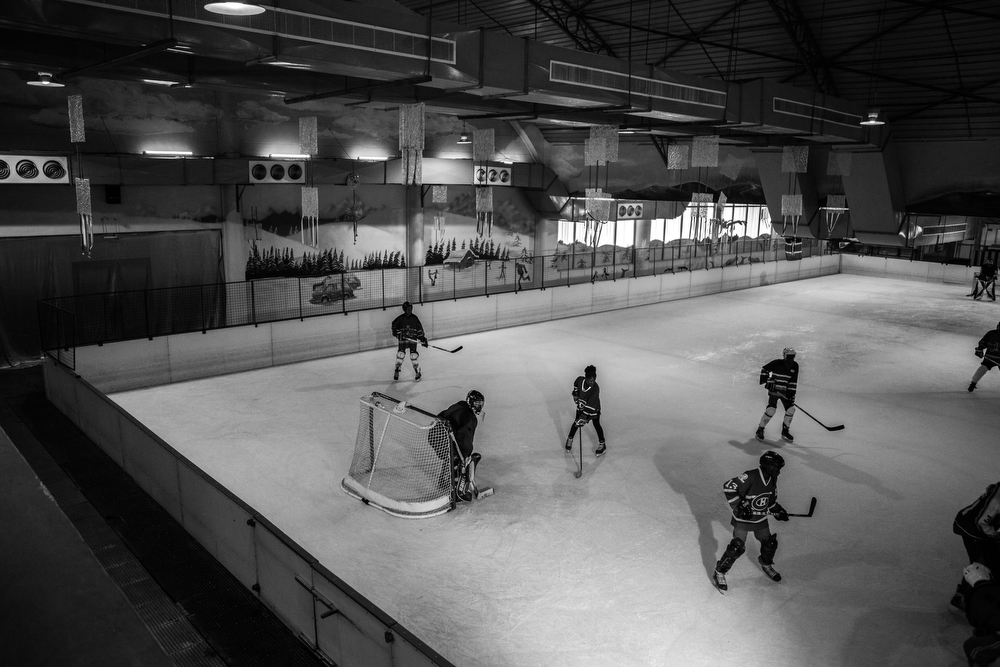 There are only two regular goalies who participate in scrimmages, and if one doesn't show, the players will put objects in front of the other net to make it more difficult to score. 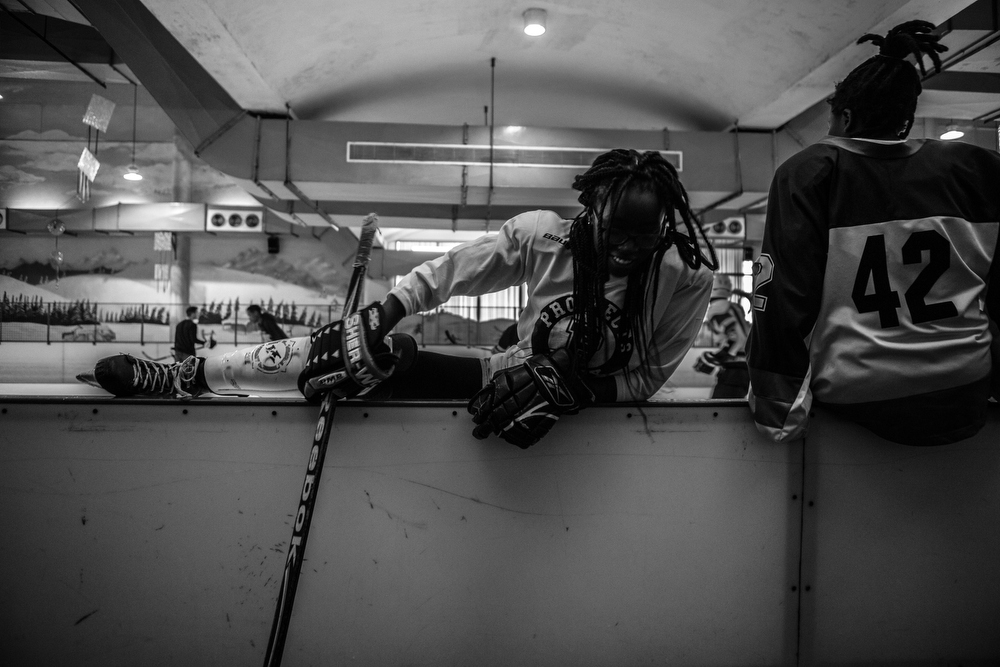 Faith Sihoho says she wanted to play ice hockey since she was a child. "I want to show girls that it is important to be themselves," she says. "That every person is a unique piece of art and finding what makes you different is the key to success. For me, that thing was hockey." 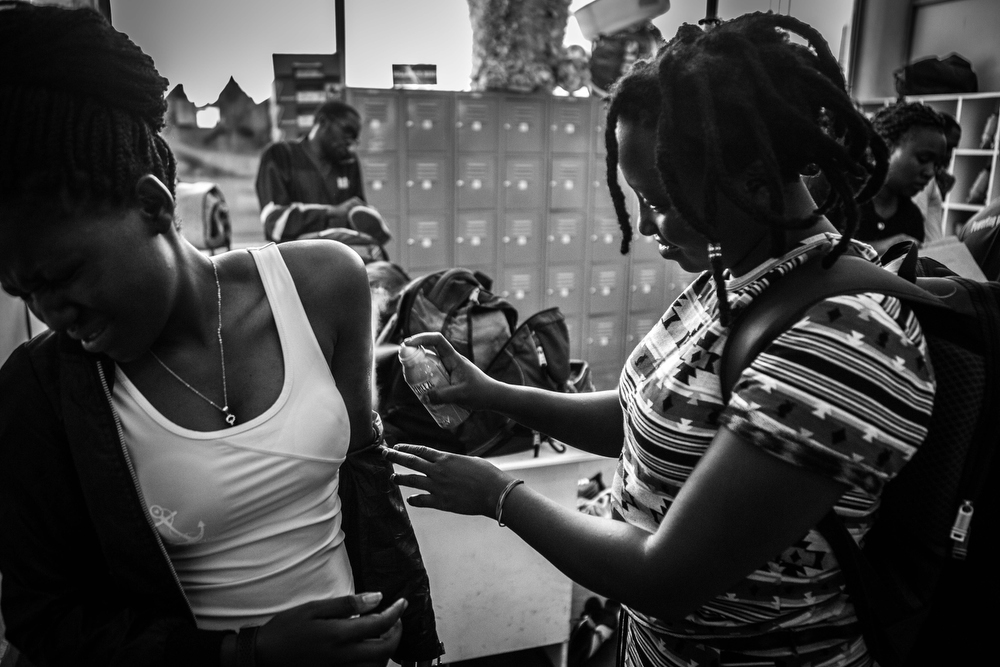 Tasha, left, has her sore arm treated by Faith Wambui after a morning skate. 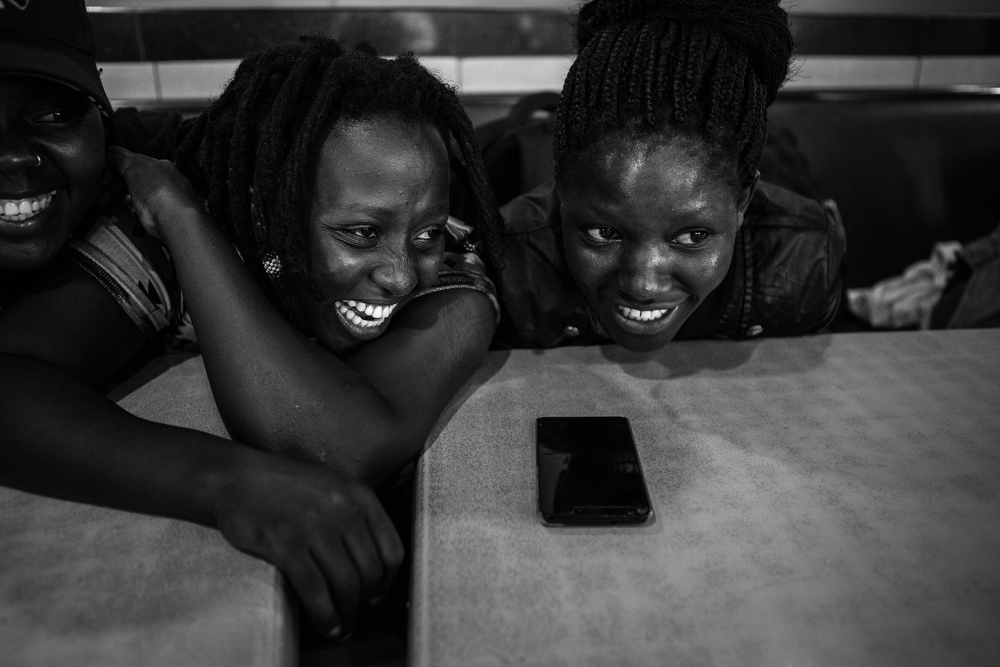 Alexcy, from left, Faith Wambui and Tasha tease their teammate, Carroll, on the speaker phone for missing practice earlier that morning. 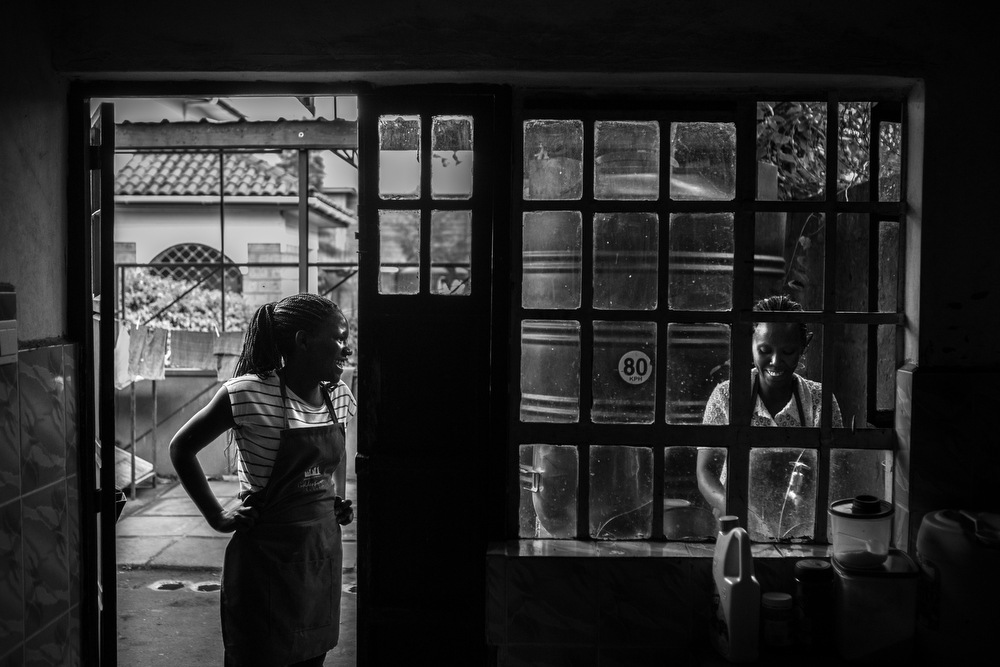 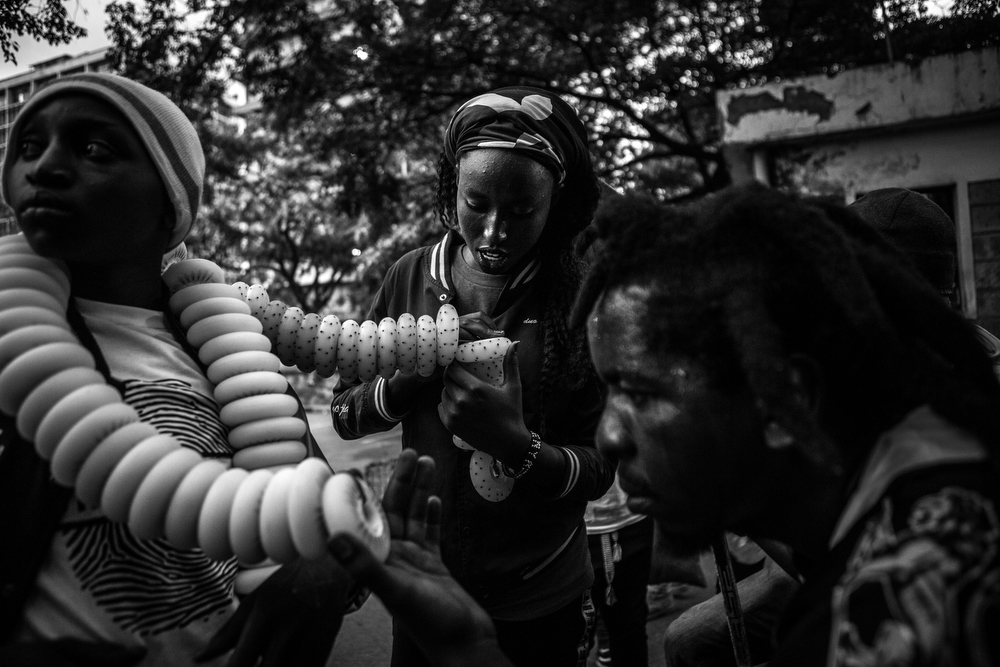 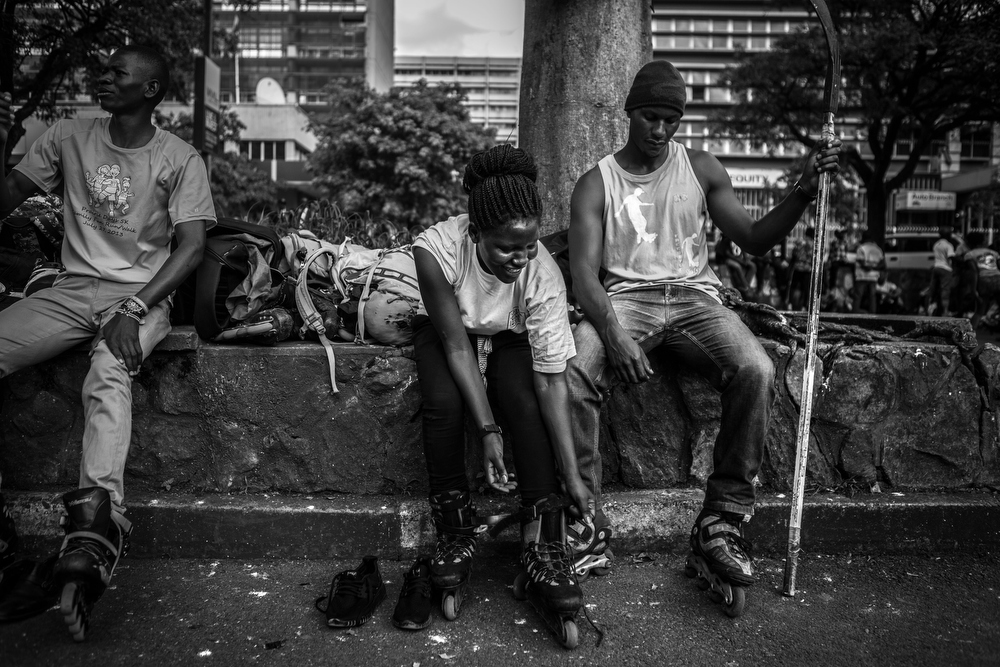 Many ice hockey players, including Tasha, began playing roller hockey in parking lots long before they ever skated on the ice. 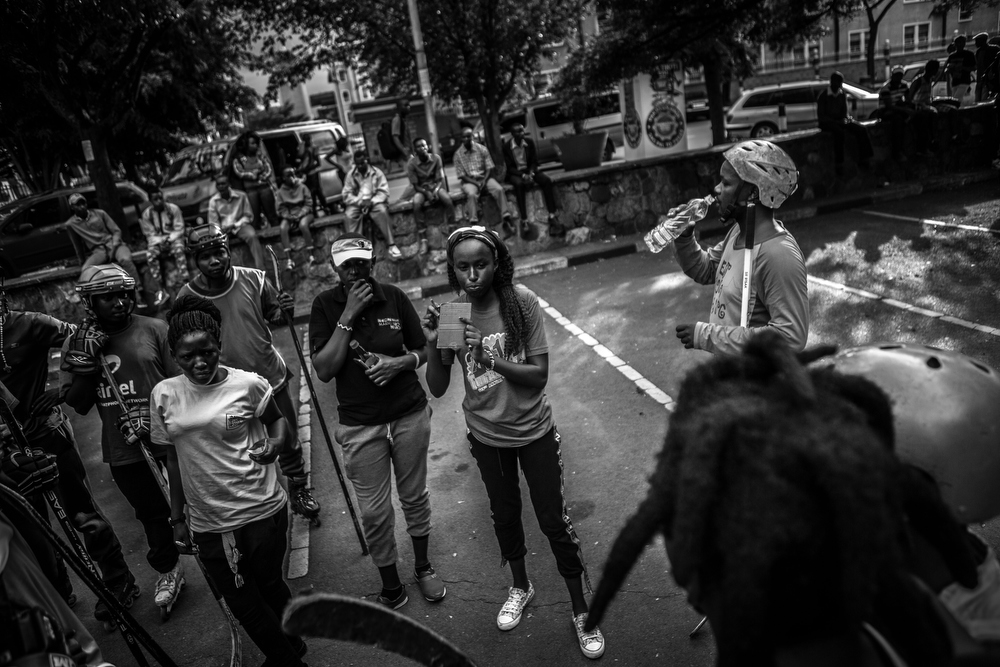 Before the game, each player pitches in some money and the winning team wins the pot. The game MVP gets an extra portion. 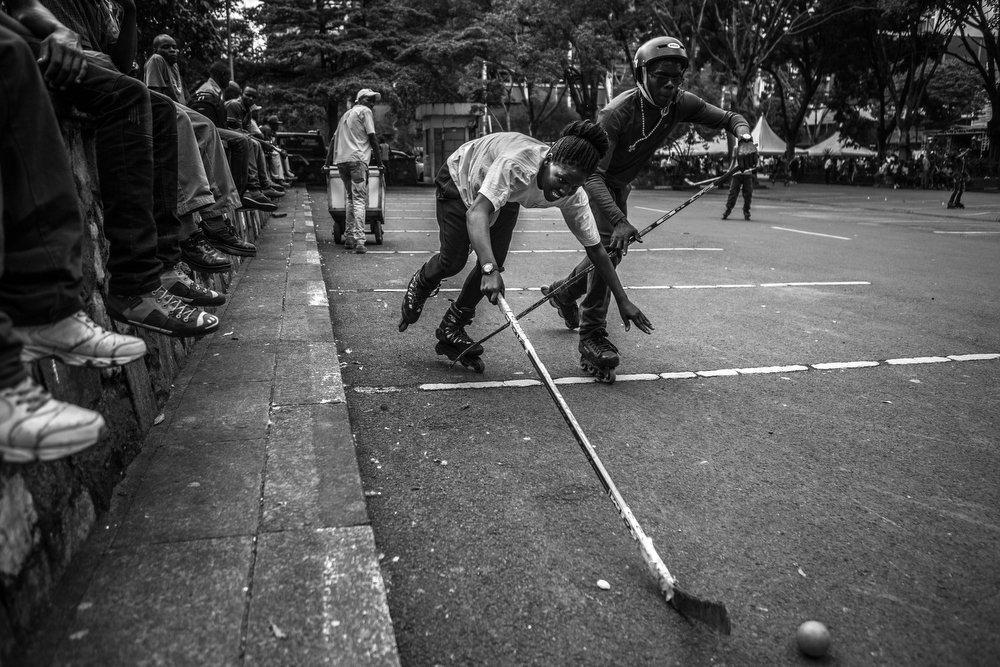 Whether it's on asphalt or ice, Tasha gives it her all when diving for the ball. 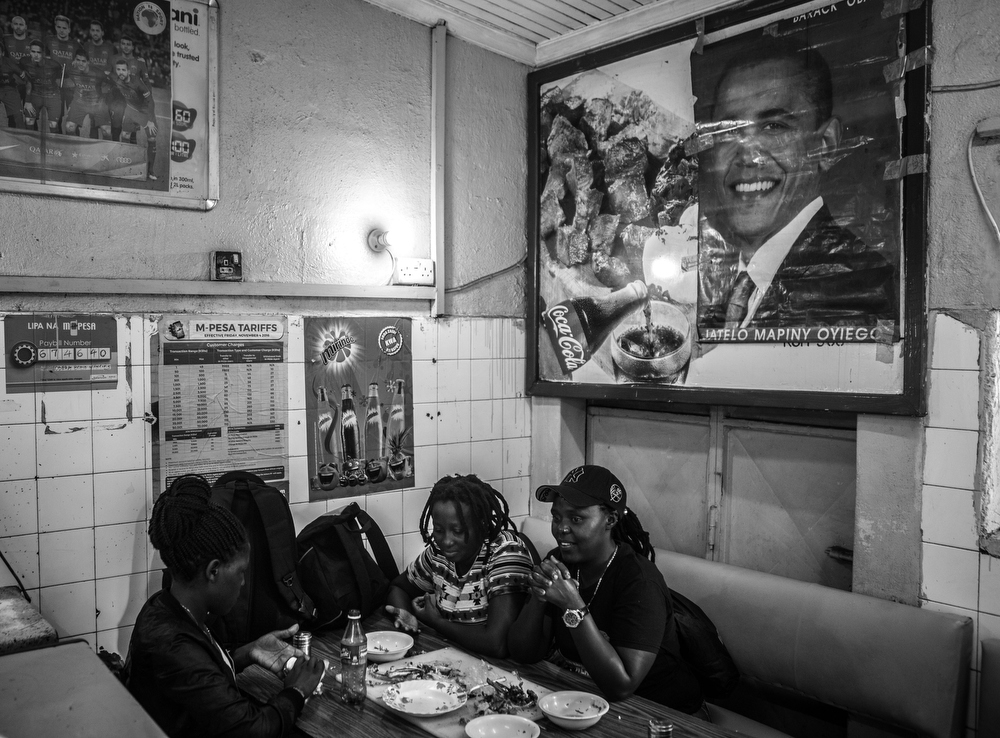 Tasha, from left, Faith Wambui and Alexcy eat nyama choma, a traditional dish of grilled meats with ugali at the Kenyatta Market after a morning hockey practice. 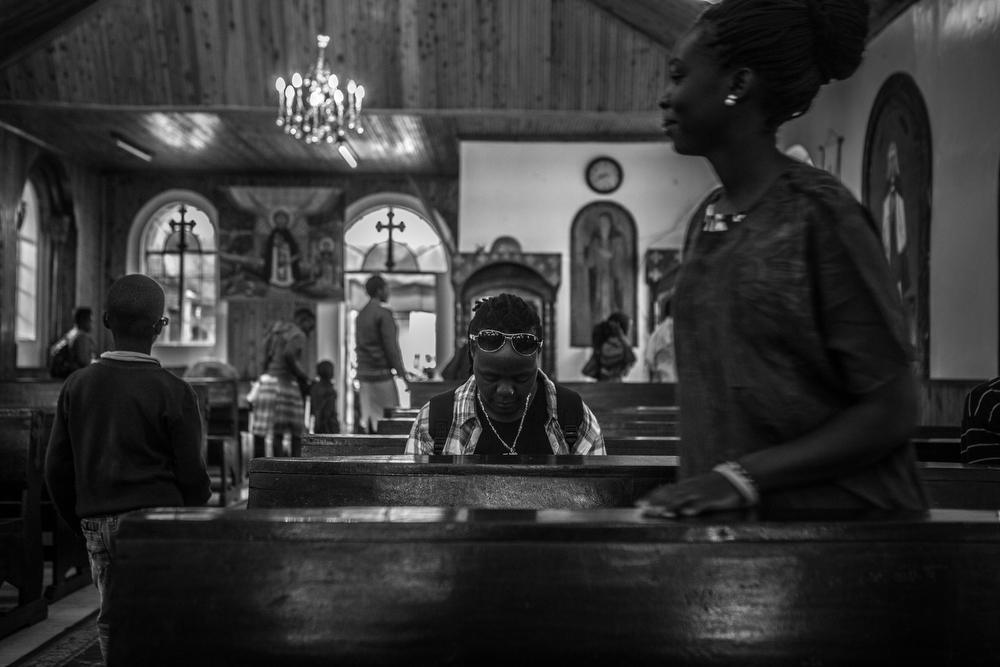 Alexcy prays quietly at the end of a morning church service. She often stays behind to help feed local orphaned children sweet bread, meat and tea. 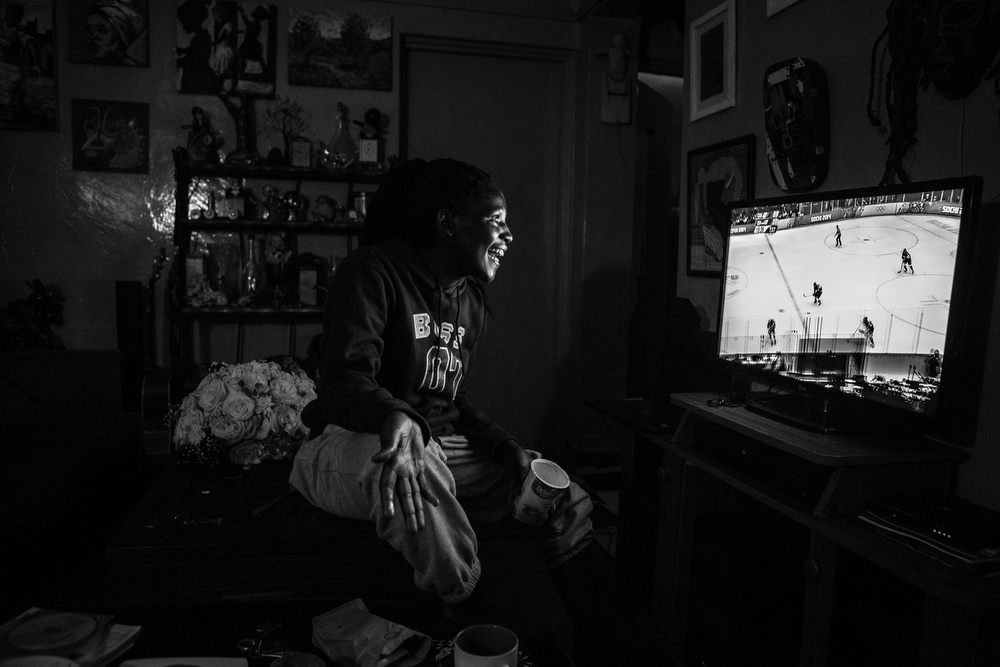 Tasha has watched the 2010 Olympic gold medal game in women's hockey between Canada and the United States many times. 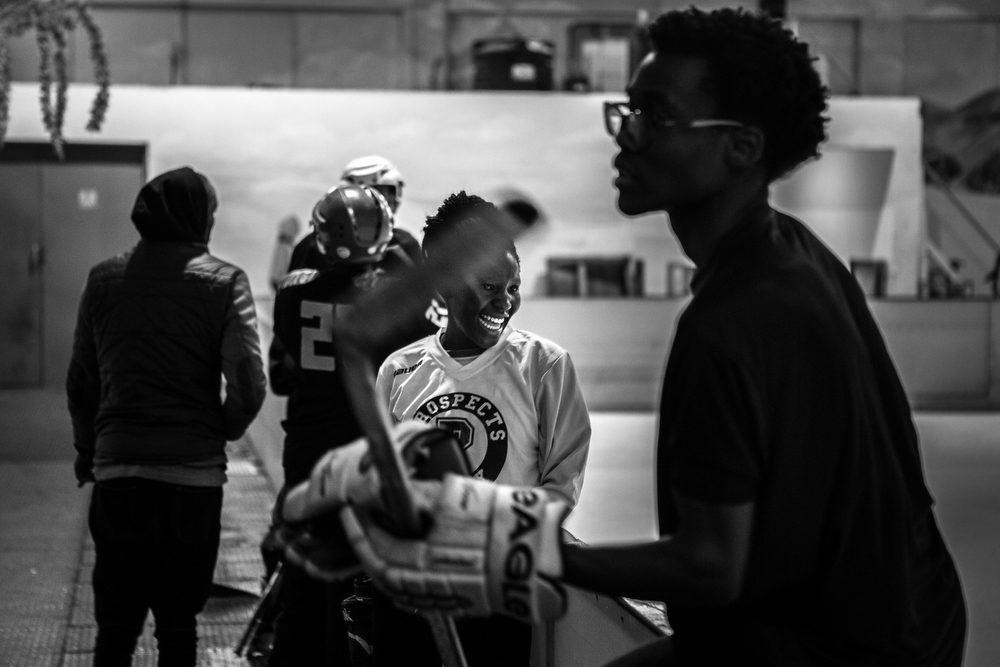 Tasha, center, is one of five women who play hockey twice a week with anywhere from 10 to 30 men. 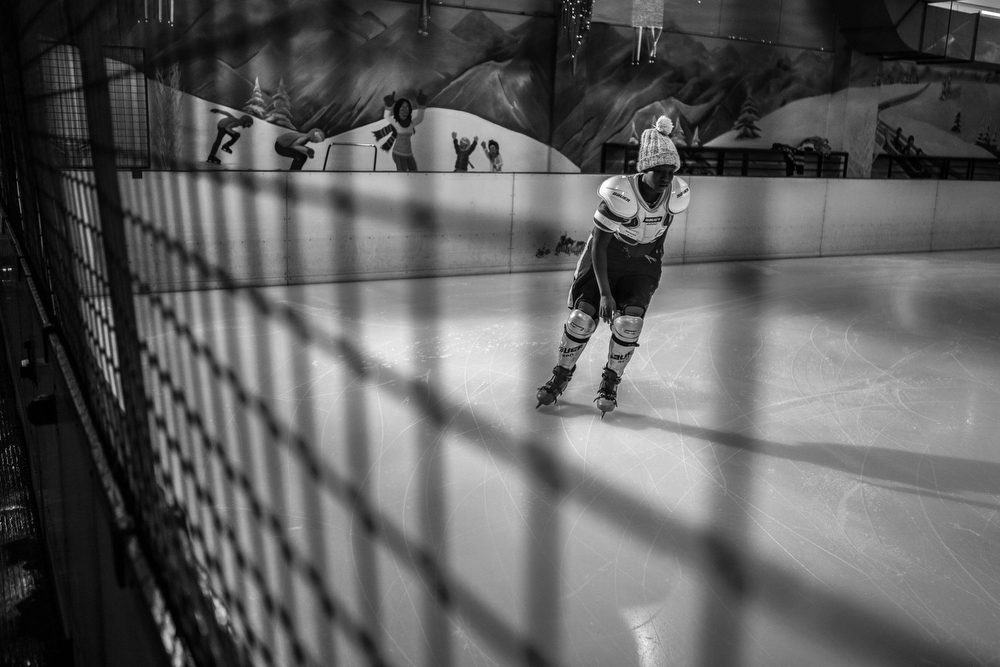 Faith Wambui hits the ice early for a warm-up skate before a Wednesday evening scrimmage. 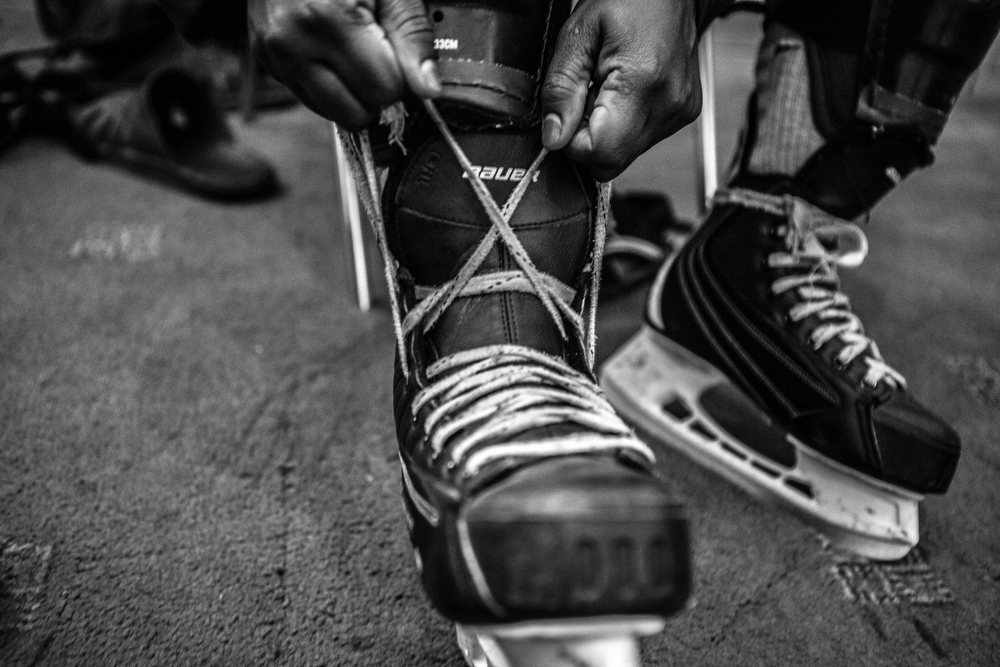 Today Alexcy is the only woman at practice. She is determined to be a pioneer for women in the sport in East Africa. 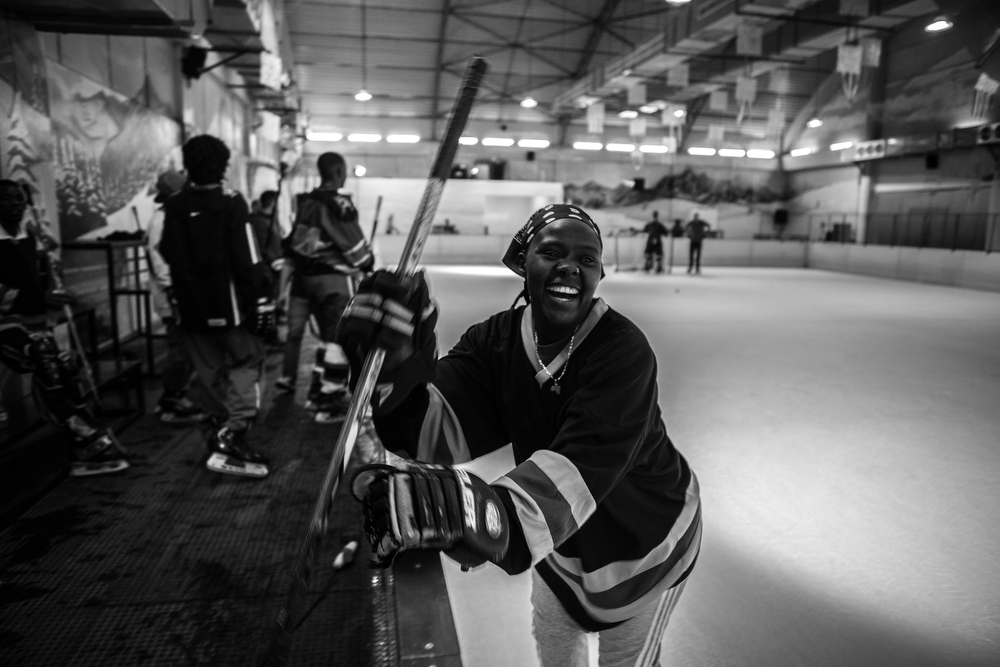 Alexcy laughs with a teammate as she finishes a shift during a scrimmage. 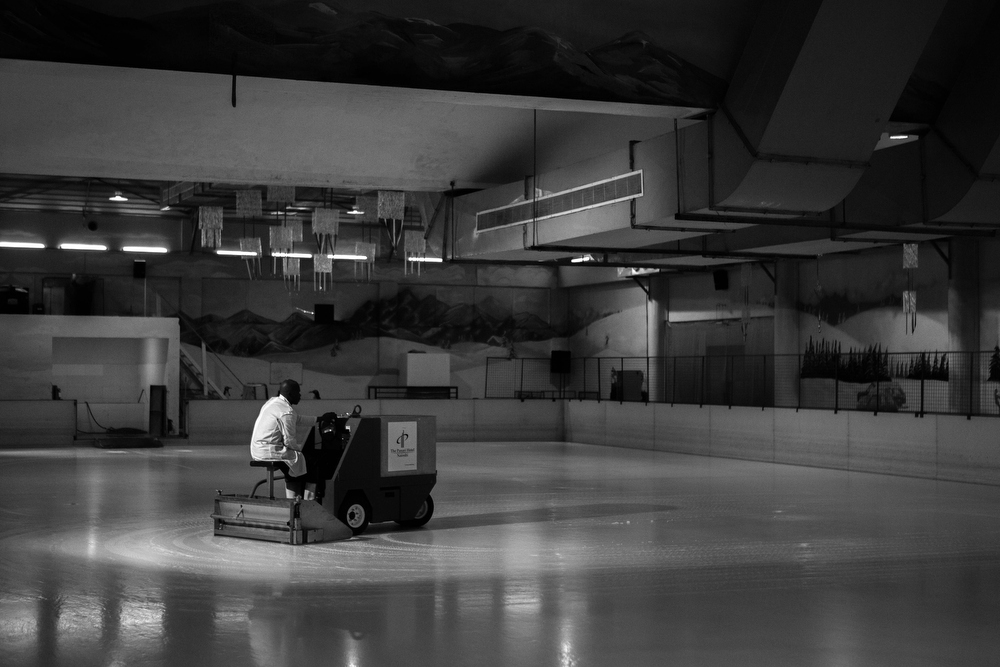 This Zamboni only has the ability to flood the ice. It is unable to shave the top layer of ice to smooth the surface.
You May Also Be Interested In 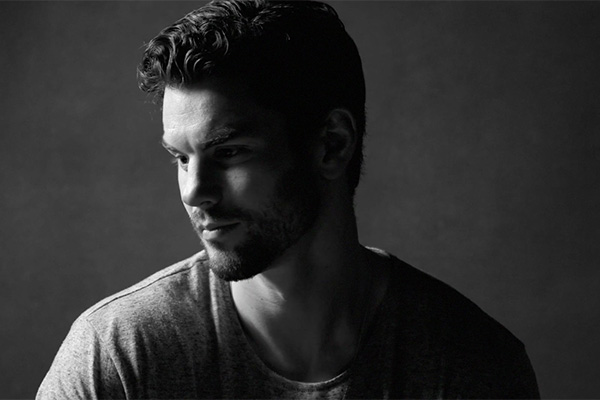 A Scar is Born 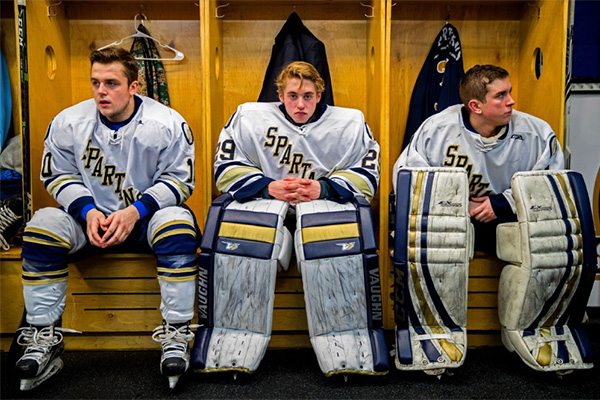 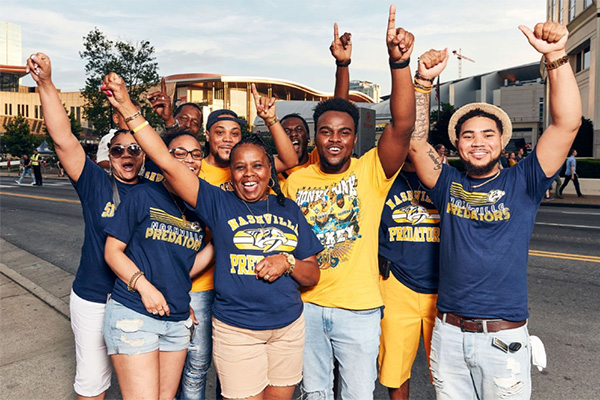 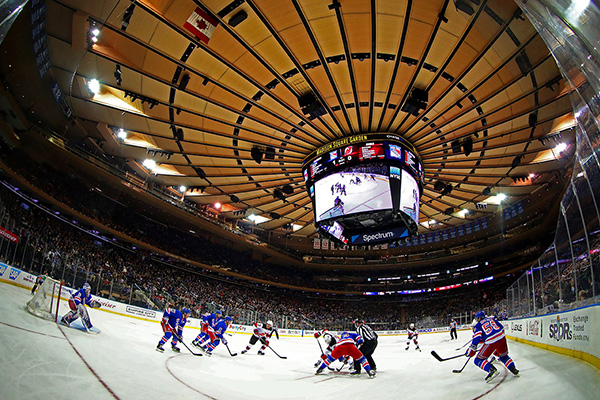 15 Hours at the World's Most Famous Arena