TRACKING HEARTBEATS AT THE NFL DRAFT 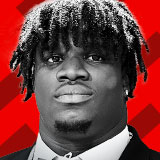 Jordan Davis
DT, Georgia
Davis, the 2021 Bednarik Award winner, was linked to a number of teams with defensive needs in the weeks leading up to the draft. His mother, a big Eagles fan, was hoping he'd land with Philadelphia. 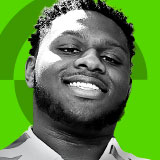 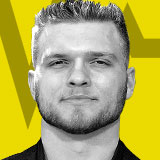 Aidan Hutchinson
DE, Michigan
Up until draft week, Hutchinson had been the odds-on favorite to be selected No. 1 overall. Then sportsbooks turned their eyes to Georgia DE Travon Walker. The anticipation for No. 1 was high. 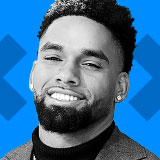 Chris Olave
WR, Ohio State
Olave was one of two Buckeyes pass-catchers in a stacked receiver class. He set a school record with 35 career touchdowns, and was expected to be among the first WRs off the board.

Olave
96
Methodology
Data from wearable heart rate monitors is averaged out for each minute. Tracking begins at 6 p.m. ET and ends 30 minutes following each player's selection.
Tap on a player's photo above to view only his data

Pre-draft stress Round 1 of the NFL draft was a full day for the prospects who attended the Las Vegas event in person. After breakfast at 9:30 local time, they headed to their hotel rooms to get dressed before photo opportunities and interviews on the red carpet at the Bellagio Fountain.

An anxious start Post-selection, Ekwonu said he thought his heart rate might have been at its highest immediately before the red carpet, but the tracking shows his beats per minute (BPM) actually peaked toward the end of the red carpet.

Medical expert's perspective Harlan Krumholz, a cardiologist at Yale New Haven Hospital, explained BPM can elevate two to three times over resting rates in pressure situations. “Their body gears up in that moment, and it releases adrenaline substances that end up driving the heart rate high,” he said.

Former first-rounder perspective Next was the green room, where prospects wait to be called. “You're so eager and anxious to know where you're going to be going next, right?” said Robert Griffin III, the second overall pick in 2012. “Who are your new teammates, the head coach, the city that you're diving into?”

The ups and downs Davis said he was anxious all night. Krumholz explained that in moments of excitement, athletes' bodies respond like they would during a big play. “You feel your heart pounding, you feel fidgety, your body wants to move,” Krumholz said.

Almost time Hutchinson said the gravity of the moment hit after the red carpet, in the green room. “Just being there with my family, my dad was tearing up a little bit,” he said. “That definitely made me a little emotional before the draft.”

Calm in the storm Olave said he didn't feel too nervous but when those moments hit, he would close his eyes and take deep breaths. “I know it's all God's plan. I wasn't really stressed,” he said. “Sent a couple prayers up, and God answered them.”

Quiet family moment The Hutchinson family huddled while Roger Goodell opened the draft outside. “My mom, she gave a little motivating speech saying, whoever picks me, whoever doesn't, we don't care,” Hutchinson said. “Wherever I go, I'm going to give it my all.”

The pick is in

Dapping up Goodell “Just being there and walking down the stage and seeing the crowd open up, dapping up Goodell, it was something I've watched on TV for years now,” said Hutchinson, a Michigan native who grew up a Lions fan. “To be there in first person was unreal.”

Familiar area code Ekwonu will stay close to home. Bank of America Stadium is seven miles from his high school, Providence Day School. “As soon as I saw that 704 number [Charlotte area code], my heart rate shot up,” he said.

The pick is in

Saints come calling Immediately after his Ohio State teammate was called, New Orleans traded up to select Olave. “I was more happy for [Wilson] than me!” Olave said. “I've seen the work he puts in, and I know Garrett, he's a good person, too. I wish the best for him.”

Fly Eagles fly Davis couldn't resist forming a mini mosh pit with Eagles fans as he walked off the stage. “We jumped around, hopped around and stuff,” he said. That mini dance party could explain the bumps in the tracing line post-selection.

Krumholtz said it isn't reasonable to expect the athletes' BPMs to return to normal resting rates immediately because of the excitement surrounding the experience. “That's no longer anxiety or uncertainty, but it's just celebratory,” he said.

Making mom proud “This is the biggest moment of our lives,” Davis said of his mother's reaction to her Eagles taking him. “Everything that she taught me, everything that I went through in college just to get to this point, I hope she can see her son and be proud.” 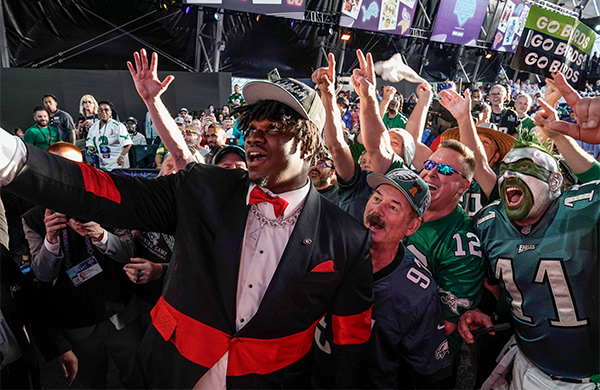 When the Eagles picked Davis at 13, it was the first time the team had selected a defensive tackle in the first round since six-time Pro-Bowl Fletcher Cox in 2012. “Is this real life?” Davis asked after being drafted. “It feels like a dream.” 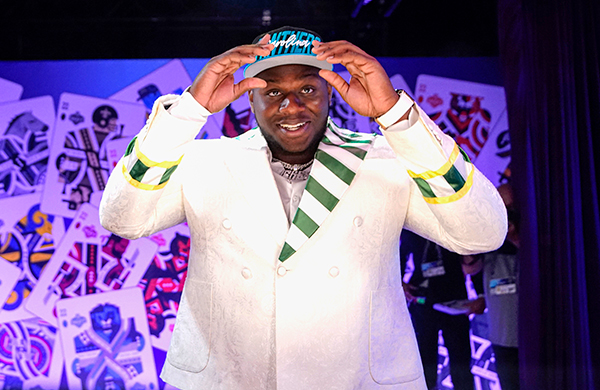 Based off the data, Ekwonu's emotions were on a roller coaster. When he got nervous, he tried to remind himself that whichever team selected him, it would be the right fit. “With Carolina, I feel like that came to fruition,” he said. 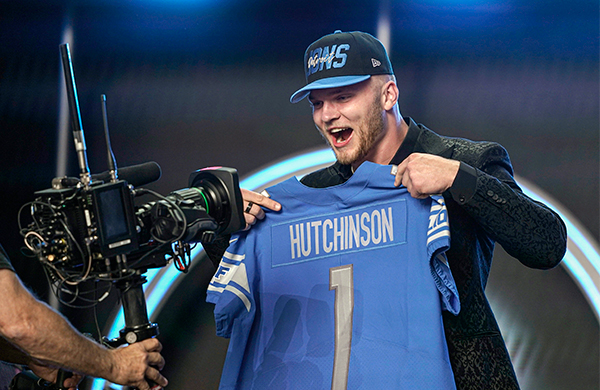 Sewn in by his mom, Hutchinson's draft day suit was lined with tons of the goals and mantras he wrote in his journals over the years. Many of them were achieved in college. Now, with the Detroit Lions, there are new goals to chase. 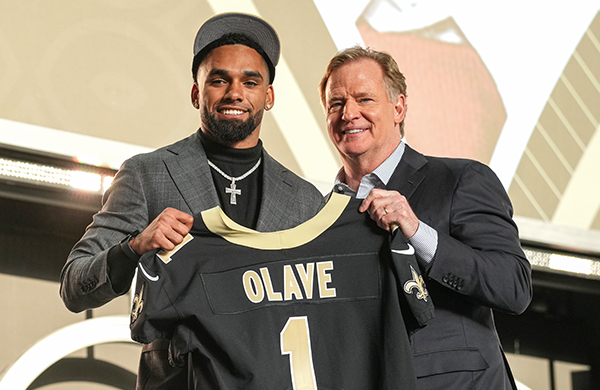 The Saints get exactly what they need in Olave. Partly because of injuries, they finished 32nd in passing offense last season. The calm and collected wide receiver should get plenty of opportunities to show off his talent.