How Dabo built Clemson into a monster
The Tigers have become college football's improbable superpower. Here's how a former Alabama walk-on made it happen.
By David M. Hale
Start
BAMA SAYS BYE
2003
2003-08 seasons

Dabo Swinney lost his dream job in 2000, when the entire staff at Alabama was axed. So he started ... selling real estate. And his old boss says if Swinney had stuck with it, he could have been a millionaire property mogul. But he wanted to get back to coaching, and that has turned out OK, hasn't it? Swinney drove to see Tommy Bowden speak at an Alabama church function in 2001, which led to a job on Bowden's Clemson staff. His first big coup? Landing star tailback C.J. Spiller. Swinney sweet-talked Spiller into signing a makeshift contract on the back of a business card -- a card that's now framed in Swinney's office -- and those same sales skills persuaded AD Terry Don Phillips to promote Swinney to head coach when Bowden resigned in 2008.

At that point in his career, Swinney had never even been a coordinator. But when the 2009 season kicked off, he was Clemson's head coach. Few expected the gambit to work, and losses in his first three ACC games threatened to end the experiment before it truly got started. But Swinney has always relished the role of scrappy underdog, and to this day, he refers to his home as "little old Clemson." The "aw shucks" approach resonated that season, and wins in seven of the Tigers' last nine games (including a bowl victory over Kentucky and a top-25 ranking) helped convince the doubters.

Let's be blunt: Dabo's second full season at Clemson was a disaster. The Tigers finished 6-7, including a bad loss to rival South Carolina. After the game, Dabo was called into Phillips' office and expected to get fired. Instead, Phillips asked, "What do you need from me to turn things around?" The answer was hiring offensive coordinator Chad Morris. The Texas native brought an up-tempo spread system that helped future stars such as DeAndre Hopkins and Sammy Watkins post huge numbers. Perhaps most importantly, Morris' system looked like a carbon copy of the one being run at Gainesville High in Georgia, where a QB named Deshaun Watson was emerging as one of the nation's top recruits.

Brent Venables' wife might be the true architect of Clemson's rise. In January 2012, Venables was sitting in the Oklahoma City airport, waiting for a plane he wasn't sure he wanted to board. A week earlier, Clemson's first ACC title under Dabo became overshadowed by a 70-33 Orange Bowl loss to West Virginia, and the Tigers were looking for a new defensive coordinator. Bob Stoops had hired his brother, Mark, as co-defensive coordinator a few weeks earlier, which nudged Venables toward testing the job market. But leaving the Sooners was a big move, and Venables isn't the type to make big moves. So it wasn't until his wife called him at the airport and scolded him for his ambivalence that Venables finally made up his mind. He flew to Clemson, he took the job, and the Tigers' defense has been among the nation's best ever since.

Want to build a dynasty? Start with a few good quarterbacks. Dabo has enjoyed a wealth of riches at the game's most important position, from Deshaun Watson to Trevor Lawrence. But the run of elite passers started with Tajh Boyd. In Morris' offense, Boyd posted video game numbers, highlighted by his 2012 performance against NC State, in which he set an ACC record with eight total touchdowns to go with 529 total yards. After the season, Boyd was named ACC Player of the Year, having tallied more than 4,000 total yards and led Clemson to an 11-2 record.

It's one thing to lose. It's another to lose five straight to your in-state rival, as Clemson did when it fell to South Carolina 31-17 in 2013. And it's something completely different when you lose five straight to a rival coached by Steve Spurrier. "He's from Pluto, and I'm from Mars," Spurrier said of Dabo. "And I read where Pluto's not a planet now." For all of Clemson's success -- three straight 10-win seasons, a top-10 ranking -- Dabo couldn't live down that his rival kept winning ... and talking smack. But two months later, the arrival of Deshaun Watson helped launch a turning of the tide.

On Christmas Eve in 2011, Chad Morris squeezed into the stands at a high school basketball game in Georgia. He'd scrapped family plans so he could see a young quarterback named Deshaun Watson play hoops. Watson had promise, and Morris was determined to lure him to Clemson someday. Morris' determination paid off with a crucial commitment from Watson. At Clemson, it was obvious from the outset that Watson was special. He threw a gorgeous touchdown pass on his first drive and threw for 435 yards and six TDs in his first start. Then, playing on a torn ACL, Watson dominated South Carolina, helping Dabo -- finally -- topple his rival. Watson soon emerged as one of college football's all-time greats, and Clemson hasn't lost to the Gamecocks since.

How does Dabo celebrate his first playoff berth? With a pizza party for himself and 50,000 of his closest friends, of course! The idea started with an offhand joke Swinney made after the first playoff rankings were released in 2015, with Clemson checking in at No. 1. He didn't want his team celebrating success too early, he said, but "if we're still No. 1 in the final rankings, we'll throw a pizza party for the whole stadium." Well, that's what happened, a fitting end to a season in which Dabo's personality -- from his "bring your own guts" bluster after a rain-soaked win against Notre Dame to his awkward dancing in the locker room -- became as much a part of the story as the on-field success. In the years since, the narrative that Clemson is a fun place to play has stood in stark contrast to Nick Saban's "process" at Alabama and has helped turn Clemson into a recruiting juggernaut.

Dabo Swinney began his college football career as an undersized walk-on receiver at Alabama. So when a skinny kid named Hunter Renfrow showed up as a walk-on in 2015, Swinney was smitten. Renfrow was small and unassuming and was once confused for a water boy, but he had heart. Dabo put him into the middle of the action early that season, and so it was perhaps destiny that, when Deshaun Watson drove Clemson's offense down the field in the final minute of the season's final game against Alabama, it was Renfrow who snagged the pass in the end zone to give Dabo his first national title.

It's a funny thing that Dabo's rise at Clemson has been defined as much by the losses as by the wins. The 2012 Orange Bowl brought Brent Venables. The 2015 national championship game created a blueprint for the triumphant rematch against Alabama. And in 2017, it was a brutal blowout loss in the Sugar Bowl -- again to Bama -- that set the stage for the future. Louisiana native Travis Etienne was demoralized by the loss in front of his hometown fans, and he vowed to improve. Christian Wilkins, Clelin Ferrell and Austin Bryant all had NFL futures, but they couldn't leave with unfinished business. And while Kelly Bryant had served as a worthy successor to Deshaun Watson, his limitations in that loss to Alabama opened the door for the next great Clemson quarterback, Trevor Lawrence, who arrived just a few weeks later.

If Watson was a once-in-a-generation star, the question should be asked: How long is a generation? Because just a year after Watson departed for the NFL, Clemson found its next generational talent. Lawrence astonished coaches and teammates with his arm strength and acumen from the outset, but it took a month for him to wrest the starting job from Kelly Bryant. When the change came, it nearly ended in disaster. Bryant bolted from the team, Lawrence was hurt in the next game against Syracuse, and Clemson nearly lost its shot at a fourth straight ACC title. Chase Brice -- once the fifth QB on the depth chart -- came in to save the day, however, and the rest of the season was a dominant march to yet another showdown with the Crimson Tide in the national title game. This time, there was no drama. Lawrence annihilated the Alabama defense in an earth-shattering 44-16 win, giving Dabo his second national championship trophy. 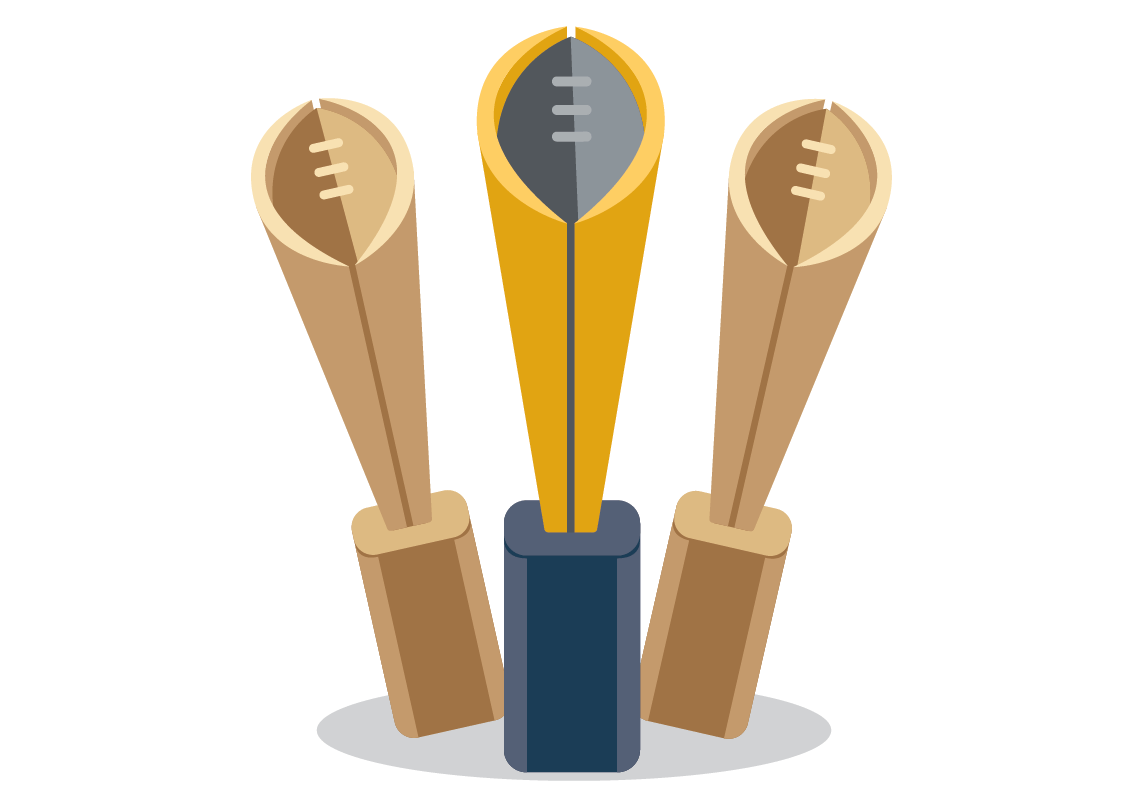 If Dabo has one true gift, it's his ability to somehow convince the world that he's an underdog, even after two national championships in three years. Earlier this spring, Swinney noted that, heck, his Tigers had never won back-to-back titles. That's the type of thing only big, bad Alabama does, and here's "little old Clemson" trying to do the impossible once again. That narrative is a tough sell these days. Clemson starts 2019 as the preseason No. 1 for the first time ever, has spent 60 straight weeks in the Top 7, and has a 2020 recruiting class that could be among the best ever by any school. SEC programs now measure themselves against Clemson, not Alabama. The Tigers have become college football's premier program, the model for success. That's not too shabby for a walk-on receiver with a knack for selling commercial real estate. Now he just has to figure out how to keep feeding this monster.