Inside the UFC’s plans to expand its global stronghold

W hen Ciryl Gane draped the French flag over one shoulder and the UFC interim heavyweight belt over the other after winning the title at UFC 265 on Saturday, he represented more than just a newly crowned champion. As the UFC's first French-born titleholder, he represented a UFC vision that has helped make it one of the fastest-growing sports entities in the world.

The UFC has targeted several regions with potential for growth, including France, which legalized mixed martial arts last year after lobbying efforts by the UFC. Mexico, China and several countries in Africa are also areas the UFC considers ready for further investment, either by holding live events or building performance institutes to identify and develop talent.

The UFC studies economic viability, TV ratings for UFC events, social media analytics and the martial arts culture when analyzing locations for development, according to chief operating officer Lawrence Epstein. Once those elements are in place, the UFC promotes local talent that have the kind of star power that can sell live events.

Analytics, for instance, suggested the promotion hold UFC 110 in Sydney in 2010, and the event quickly sold out. The UFC returned to Australia every year until the pandemic hit. Local stars such as Mark Hunt, Robert Whittaker and Israel Adesanya headlined cards, helping cultivate the fan base to the point that UFC 243, which featured Whittaker defending his middleweight belt against Adesanya in Melbourne, set a UFC record with a live crowd of over 57,000.

"Our goal is to open the sport everywhere," UFC president Dana White said.

Through 2009, the UFC held events in just seven countries outside of the United States. Since 2010, UFC events have been held in 19 different countries, and the goal is to hold 20 events per year outside of the U.S. Global expansion has resulted in 10 of the 12 UFC championship belts being worn by fighters who were born outside of the U.S.

"We're still a very young sport," White said. "And who else as young as us has been able to make a global impact the way that we have? I'd say nobody."
-Marc Raimondi 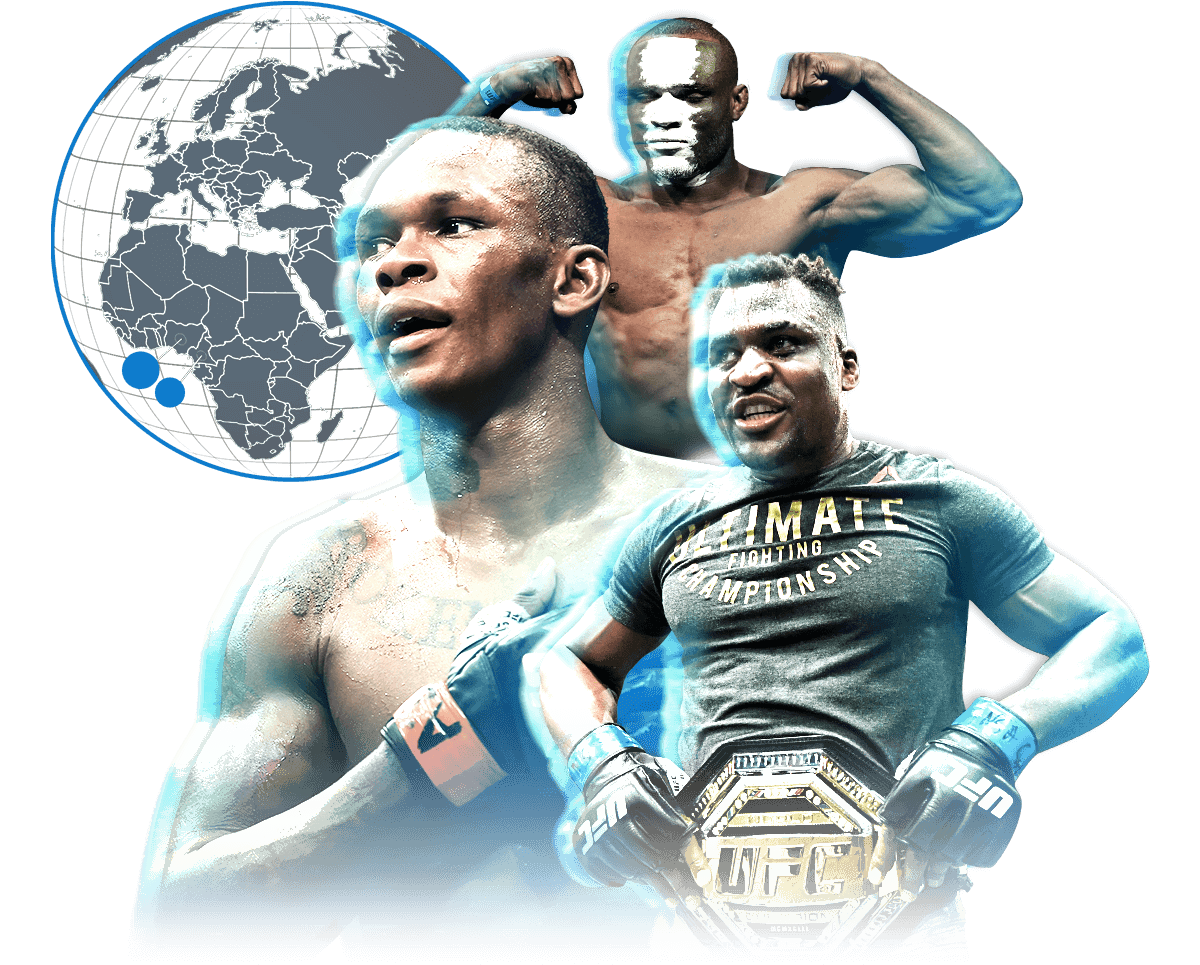 ‘The best is still out there, undiscovered’

When Francis Ngannou left Cameroon in 2012, he had never heard of mixed martial arts. When he returned in April as the UFC's new heavyweight champ, people lined the streets to celebrate.

Ngannou is one of three UFC champions born on the African continent. Middleweight titlist Israel Adesanya and welterweight champ Kamaru Usman were born in Nigeria. They also returned to their homeland after winning UFC gold.

"It means a tremendous amount to us to be able to motivate [young African athletes] and let them know that just because you're in a certain situation and circumstance, this does not mean this is the place you're going to end up," Usman said.

The Francis Ngannou Foundation is building its second gym in Cameroon, and Usman and Adesanya are working on similar plans for Nigeria. All three left the continent at young ages before pursuing mixed martial arts, but they returned as ambassadors for a burgeoning sport.

[Young African athletes] just need an opportunity to showcase their talent, and that's what we're going to be working on for the next few years.”
Francis Ngannou, UFC Heavyweight Champion

"That's going to be a priority market for us going forward," Epstein said. "We know we've got a lot of fans there, particularly in markets like Nigeria and South Africa, but also throughout the continent."

White said he is looking at building a UFC Performance Institute in at least one African country. Epstein said the goal is to hold multiple events there on a yearly basis, as soon as possible. The UFC discussed logistics with the NBA, which helped run the Basketball Africa League this year in Rwanda.

"The best is still out there, undiscovered," Ngannou said. "They just need an opportunity to showcase their talent, and that's what we're going to be working on for the next few years."
-Marc Raimondi 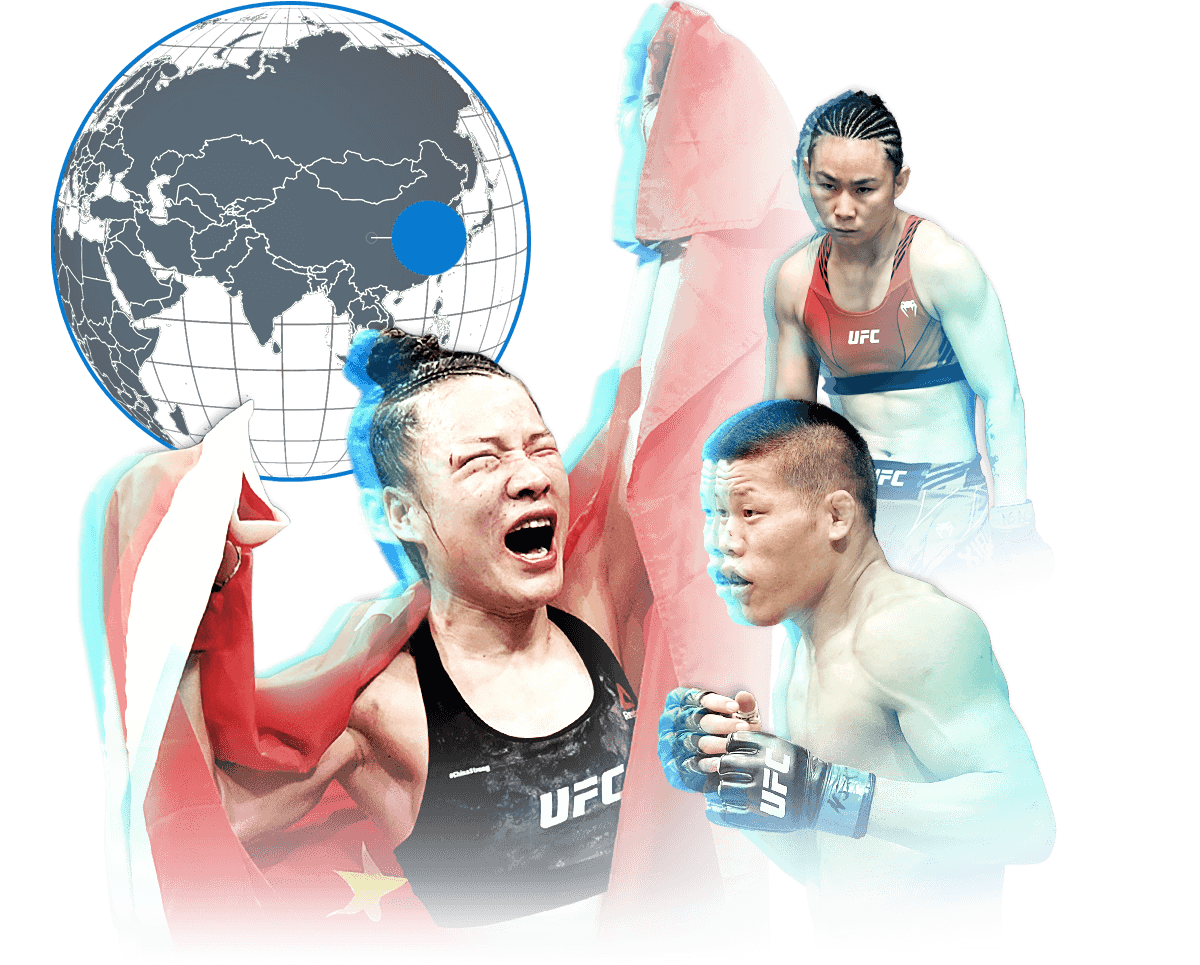 A ‘force’ in increasing the global fan base

Zhang became the first UFC champion born in China when she knocked out Jessica Andrade on Aug. 31, 2019, in a main event in Shenzhen, China.

"Her becoming world champion was massive," White said. "And even when she lost to Rose [Namajunas in April], it was massive in China."

The UFC envisions holding multiple events per year -- and a Dana White Contender Series -- in post-pandemic China, according to Epstein.

"I think that market can be as big, if not bigger, than the United States, once it matures further," Epstein said.

Zhang's success coincided with the opening of the UFC Performance Institute Shanghai in June 2019.

Zhang said the UFC Performance Institute (PI) has been crucial in identifying and developing talent. "This was unimaginable when I was new to MMA," she wrote in an email, adding that the PI establishes "confidence and goals for young MMA fighters."

[China] went from sort of a top-25 market to a top-five market for us, using all the metrics we look at.”
Lawrence Epstein, UFC COO

Shortly after opening the PI, the inaugural UFC Academy Combine was launched there to identify top prospects. Those who made the cut -- approximately 30 -- were offered scholarships to the academy.

White and Epstein also praised a recent deal with Migu, the streaming subsidiary of China Mobile, which the UFC described as one of the most significant international partnerships in UFC history.

“That clearly is a market that we're excited about with regards to significant, significant growth," Epstein said. "[China] went from sort of a top-25 market to a top-five market for us, using all the metrics we look at. It's been a very significant force in increasing our global fan base.”
-Roman Modrowski

Be the ultimate MMA fan. Get excusive
content and analysis with ESPN+ 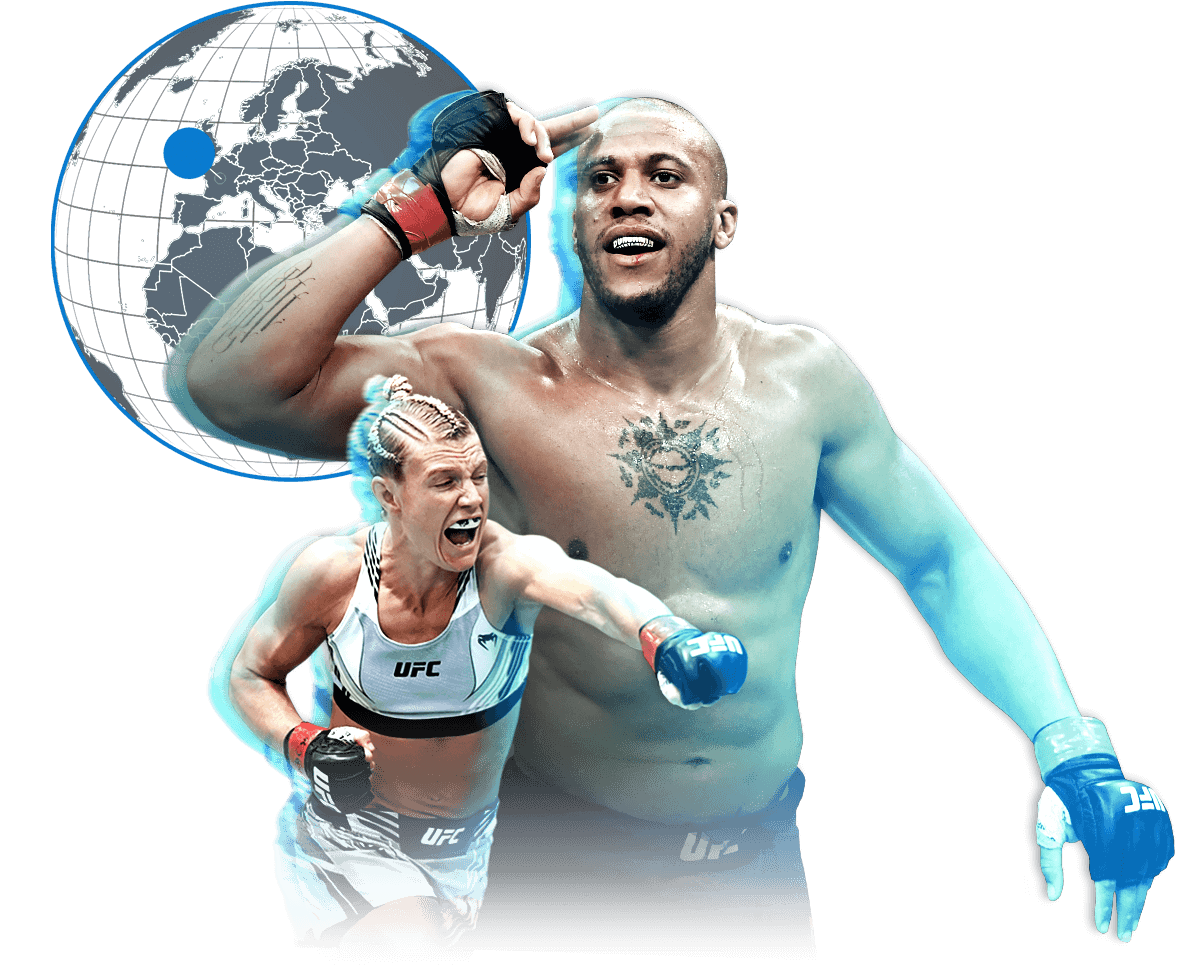 Epstein was having lunch in Paris several years ago with David Douillet, a French politician and two-time Olympic judo champion.

"It was like going out to lunch with Michael Jordan," Epstein said. "People were freaking out about the guy."

The UFC has been lobbying and educating French lawmakers about mixed martial arts on and off for more than a decade, said a UFC source, but it stepped up strategy efforts in the past four years. It paid off last year when the country legalized the sport.

"France has been hot for a while," White said. "That's why we've spent so much time, energy and money on it."

The plan for the UFC, according to Epstein, is to hold multiple events per year in France. UFC brass believe -- based on internal analytics -- that MMA is on the verge of a popularity explosion in the country. France has the second-most followers on the UFCEurope Facebook page, behind only the United Kingdom, which has been hosting UFC events for nearly two decades. Epstein also cited the love of martial arts -- France has the second-most Olympic judo medals, behind Japan -- and television ratings as indicators of potential growth in France.

This sport is going to come, for real, for all the people in France, and I think I'm going to help that situation.”
Ciryl Gane, #3-ranked UFC heavyweight

It was against that backdrop that Gane won the interim heavyweight championship with a third-round KO of Derrick Lewis. Now the focus turns to a unification bout against Francis Ngannou, who used to train in the same Paris gym as Gane.

"In France, it's a really young sport," Gane said. "But this sport is going to come, for real, for all the people in France, and I think I'm going to help that situation."

"It's a market we've been working on for a long time," White said. "Finally, we're there."
-Marc Raimondi 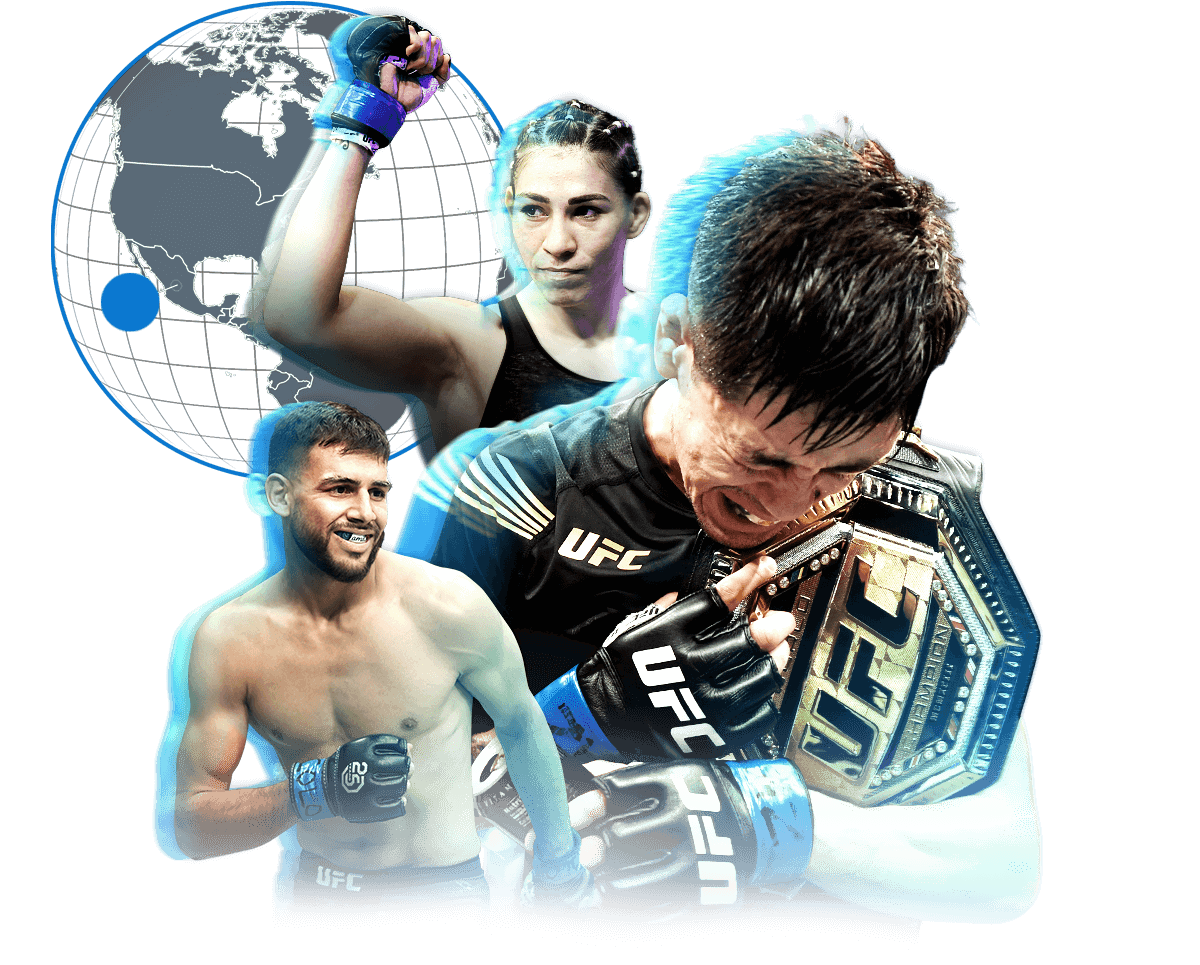 ‘Having a local champion is massive’

Tijuana native Brandon Moreno was only 20 when The Ultimate Fighter pitted athletes from Mexico against other Latin American countries in 2014. And while Moreno didn't make the cut for Mexico's roster, he established the foundation for what has become a historic career.

Moreno became the first Mexican-born champion in UFC history when he submitted Deiveson Figueiredo for the flyweight title in June.

He's doing all the things that you do after you win like that. You'll start to see the results and the growth over the next couple of years.”
UFC president Dana White on new flyweight champion Brandon moreno

"It's been amazing," said Irene Aldana, who fights out of Guadalajara and is the UFC's No. 4-ranked women's bantamweight. "Media and fans are starting to notice MMA because of Brandon's achievement. Our gym is full these days with new applicants that want to start training."

"He's doing all the things that you do after you win like that," White said. "You'll start to see the results and the growth over the next couple of years."

Epstein said Mexico is "top of the list" for a UFC Performance Institute. "We are going to be back in the market in Mexico City scouting sites again," he said.

There are only 11 fighters from Mexico currently on the UFC roster, but one is a champion and three of them are ranked in the top 10 of their division, including No. 3-ranked men's featherweight Yair Rodriguez and No. 10-ranked women's flyweight Alexa Grasso.

If history is a guide, the success of these fighters will lead to more growth in Mexico. Moreno said it was "incredible" when Mexican-American Cain Velasquez brought his UFC heavyweight belt to Mexico City in 2015. 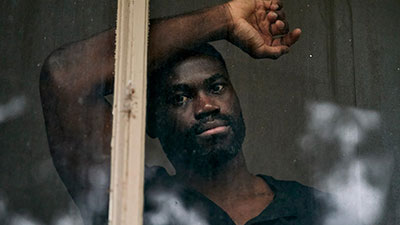 Why COVID forced Uriah Hall to move into a gym 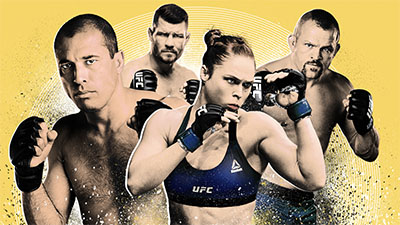 The UFC's 22 Hall of Fame moments 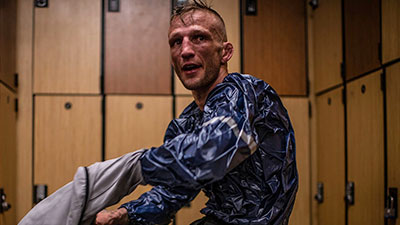 Cut and dried out: TJ Dillashaw's cut to 125 pounds 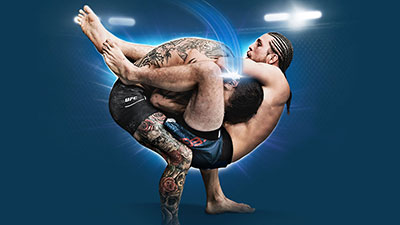