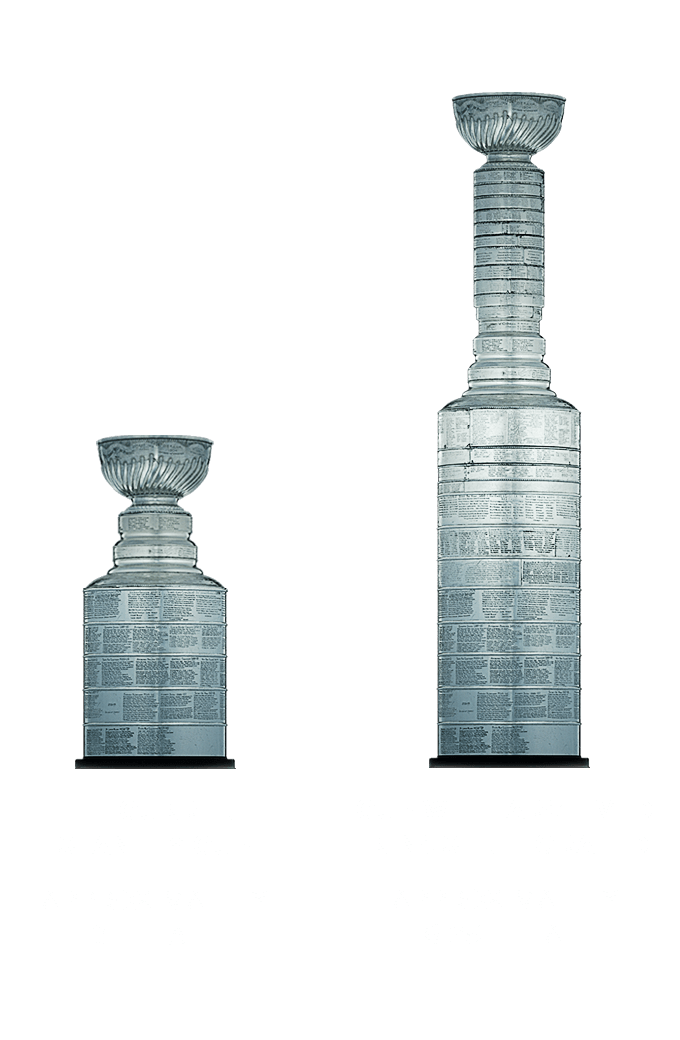 The Stanley Cup is engraved each season with the name of the team and players who won it. But every 13 years, a ring is retired to the Hockey Hall of Fame in Toronto, joining other bands that denote winners going back to 1893. The NHL and the Hall of Fame partnered with ESPN on a 3D rendering to put all 137 sets of engravings in one place — and tell the history of the league through the story of one of the most iconic trophies in sports.

The Cup was not awarded on two occasions since 1893, the first of which was in the midst of the Spanish Flu pandemic, in 1919. The Seattle Metropolitans and Montreal Canadiens were set to compete, but the series was canceled. (The 2004-05 lockout was the other.) The NHL avoided a scenario similar to 1919 in 2020 during the COVID pandemic by staging two "bubbles," in Toronto and Edmonton. 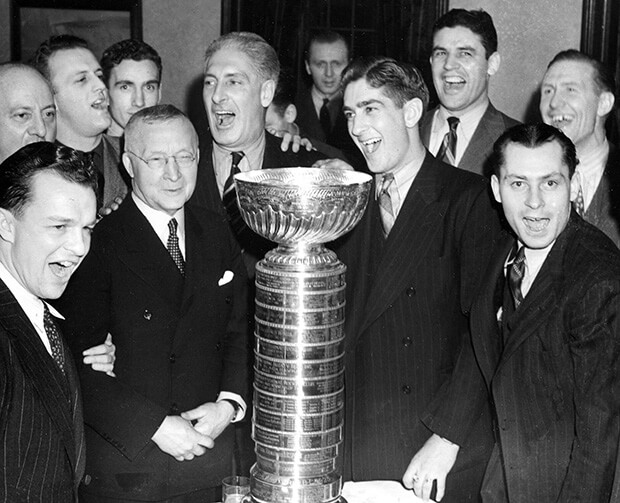 Starting with the 1926-27 season, the Cup was awarded exclusively to the champion of the NHL. In general, one ring was added per year to denote the winner, with the newest winners being added at the top. The skinnier shape resembled a stovepipe, and thus the trophy's new nickname was born.

THAT OTHER TEAM FROM MONTREAL 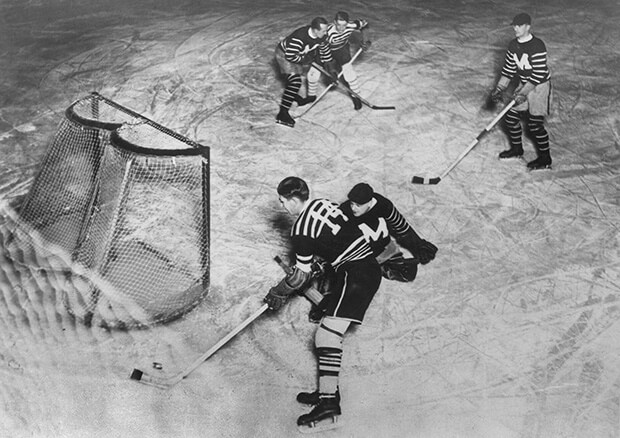 The Maroons defeated the Black Hawks, Rangers and Maple Leafs to claim their second Stanley Cup.

While the Canadiens have won the most Cups of any team in history, the Maroons were a force in their brief NHL run from 1924 to 1938. The team won the Cup twice (1926, 1935), and 11 players who wore its sweater would be enshrined in the Hockey Hall of Fame. The economic realities of the Great Depression resulted in the team's eventual demise, and in 1938, most of the team's players were redistributed to the other NHL clubs.

THE NHL TAKES CONTROL OF THE CUP

Prior to 1927, the NHL champion would take on their counterparts from the WCHL and PCHA for the Stanley Cup. The latter league folded in 1924, with the surviving teams joining the WCHL, which was later renamed the WHL. When the WHL folded in 1926, this meant that two NHL teams would meet for the Cup, a tradition which continues to this day. 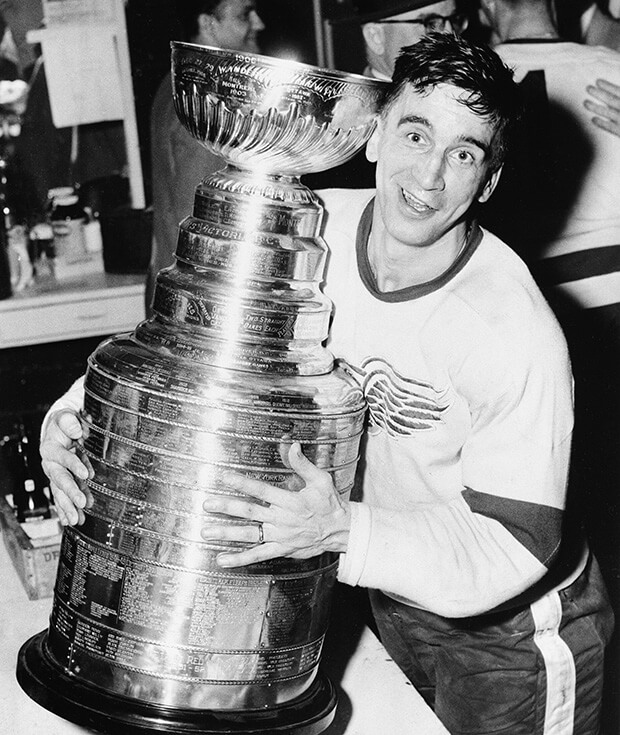 In 1948, the Cup was redesigned, as the Stovepipe Cup was becoming too arduous to handle. The base was moved back to the top under the bowl, and a new shoulder was added. All of the teams that won during the Stovepipe era were combined into nine new rings, with blank space for the next batch of winners. 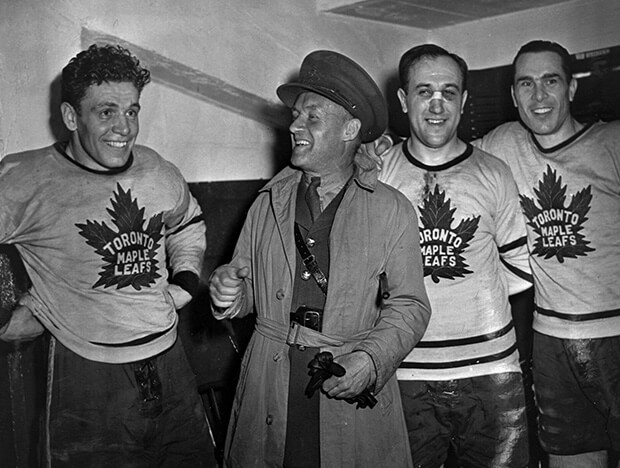 General manager Conn Smythe, second from left, assembled a Cup winner in 1941-42, and his name was later given to the NHL's award for MVP of the playoffs.

In the first year of what would become the Original Six era (1942-1967), the Leafs won the first Stanley Cup Final to go seven games, and did so after losing the first three games to Detroit. During this era, the Leafs and Canadiens each won 10 Cups, with the Red Wings winning five and the Black Hawks winning one. 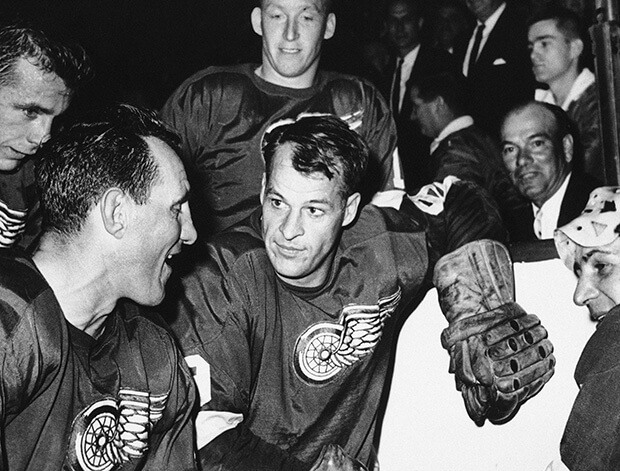 Gordie Howe was synonymous with the sport of hockey through the second half of the 20th century, and led the Red Wings to four Stanley Cups.

Gordie Howe is near the top of many NHL career leaderboards, and even had a stat named after him for his rugged playing style: A "Gordie Howe hat trick" is a goal, assist and fight in the same game (although he had only two such games in his career). Howe's NHL career included games in five decades (1940s to 1980s), the majority of which came with the Red Wings. The 1955 Cup capped off a run of four titles in six seasons for Gordie & Co. 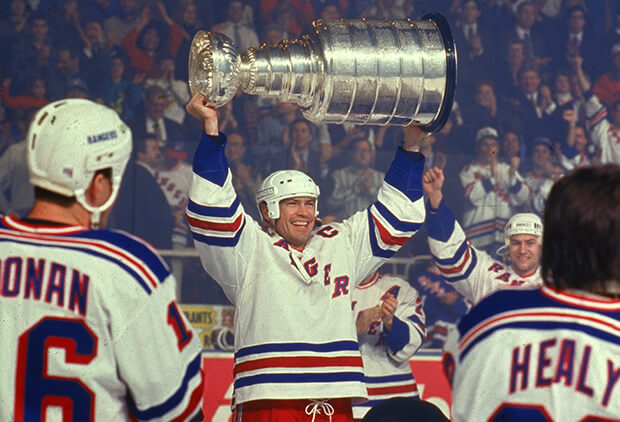 END OF AN ERA

A team from Toronto has claimed the Cup 14 times, including the "Toronto Hockey Club" of the NHA, Toronto Arenas, Toronto St. Patricks, and finally the Maple Leafs. But 1967 was the last year this happened. What's more, when the next ring is added to the base, the one featuring the Leafs' win in 1967 will be removed.

“We were really good for one month. And we had a little bit of luck” 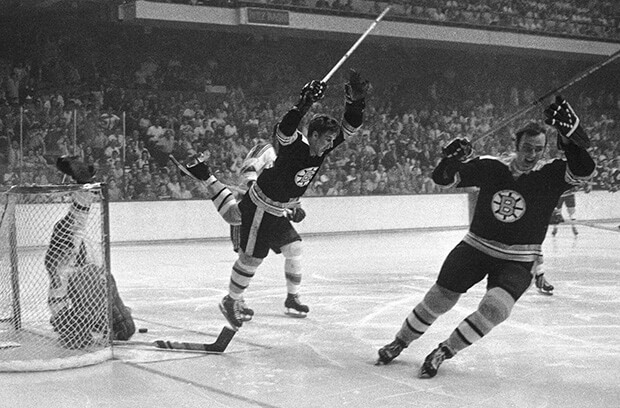 Bobby Orr's Cup-winning goal in the 1970 Stanley Cup Final is an iconic moment in hockey history.

Bobby Orr changed the script on what it meant to be a defenseman. His fast-paced, high-scoring style is clearly evident in top blueliners who shoulder that mantle in the NHL's modern era. 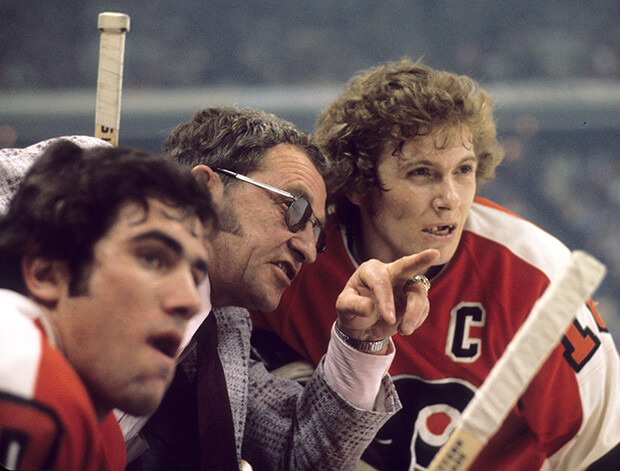 Bobby Clarke, right, and the rest of the Flyers certainly looked every bit the part of "Broad Street Bullies."

Ahead of the 1967-68 season, the NHL expanded from six to 12 teams, adding the Los Angeles Kings, Minnesota North Stars, Oakland Seals, Philadelphia Flyers, Pittsburgh Penguins and St. Louis Blues. It would take until 1974 for one of them to win the Cup, with the "Broad Street Bullies" taking it home in 1974 and 1975. Of the five teams that survive to this day, the Blues were the last of the group to win the Cup (in 2019).

Subscribe to ESPN+ to stream 75 exclusive games and more than 1,000 out-of-market matchups throughout the season. Plus, get content from senior writer Greg Wyshynski. 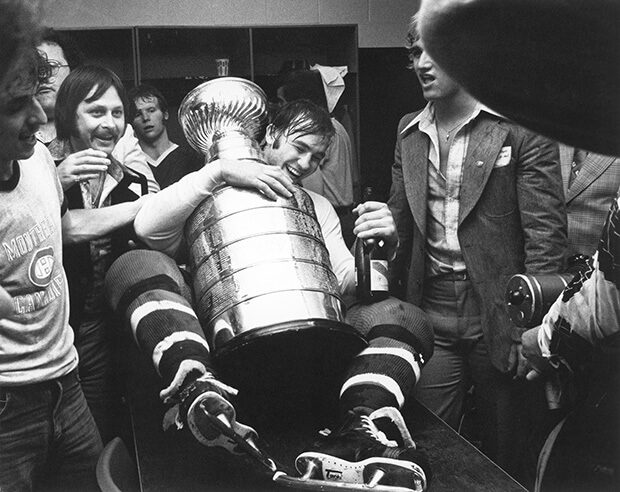 Seeing the Canadiens celebrate with the Cup became a near-annual tradition during the 1970s.

The Canadiens have won the Cup more than any other franchise (24 times), and by a good margin. Their win in 1979 capped off a streak of four straight, and six-of-nine in the 1970s.

The Islanders entered the NHL along with the Atlanta Flames in 1972. Less than a decade later, they'd begin one of the most dominant runs in North American team sports, winning four straight Stanley Cups and going to the Cup Final in the fifth year. The 2020-21 season was the Isles' final one at the Nassau Coliseum, their home during that epic stretch. 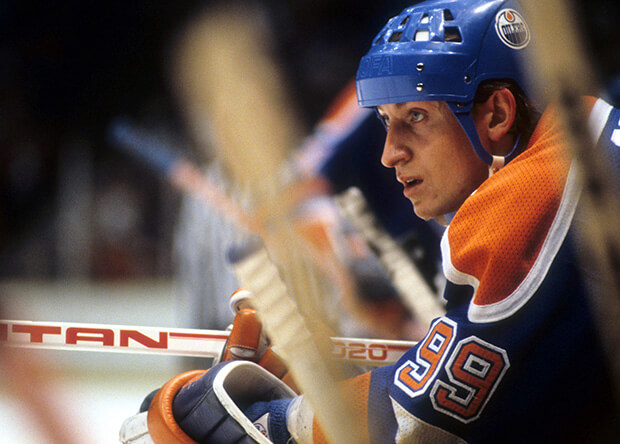 Wayne Gretzky broke myriad records as an Oiler, and was traded at the height of his powers to the Kings.

The Oilers -- who joined the NHL in 1979 after the WHA folded -- would win their fourth of five Stanley Cups in 1988, with a roster that included six Hall of Famers. The most famous of those was Wayne Gretzky, who would be traded on Aug. 9, 1988, months after winning his final Cup with the team. "The Trade" created a hockey boom in Southern California, but it sparked intense sorrow in Canada. 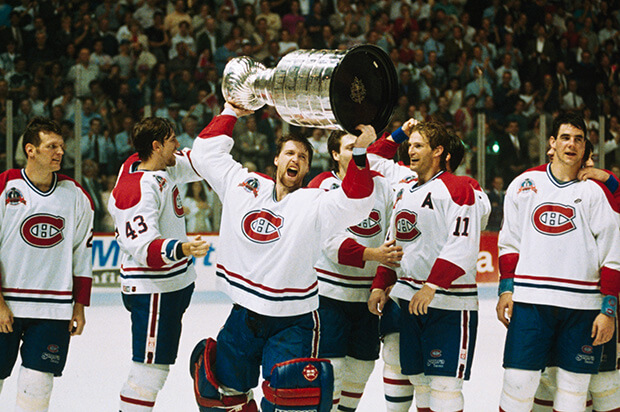 The Canadiens outlasted the Nordiques, Sabres, Islanders and Kings en route to their 24th Cup.

HULL IN THE CREASE 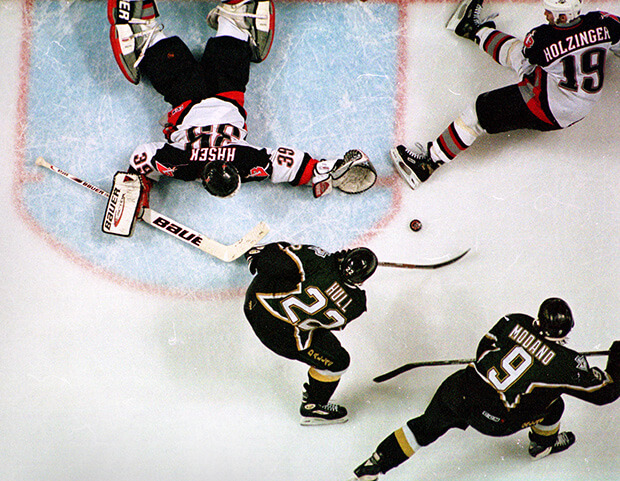 Few plays in NHL history evoke as passionate a response as the Stars' Cup-winning goal in 1999.

Stars winger Brett Hull scored the Cup-winning goal in triple overtime, putting a rebound past Sabres goalie Dominik Hasek. Video replay showed Hull's skate inside the crease, violating an eight-year-old rule. However, during the season, the NHL distributed an interpretation of that rule that would be used as precedent in the final decision to allow the goal to stand. Thus began the era of video replay review angst -- and not just in western New York. 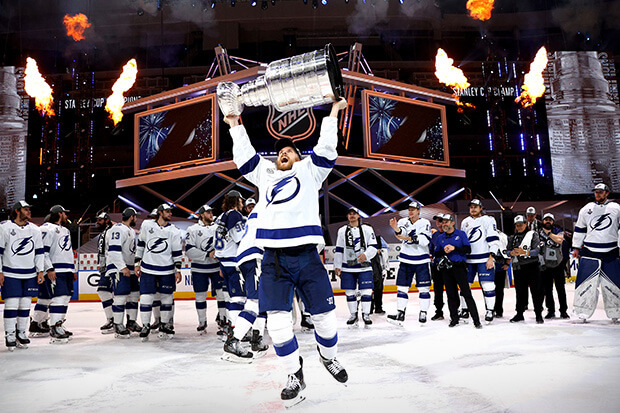 The Lightning's Cup win in the Edmonton "bubble" will assuredly go down as one of the most unique title paths in NHL history.

In a (hopefully) one-time-only event, the NHL expanded the playoffs to 24 teams and staged the playoffs in closely restricted "bubbles" in two Canadian cities. By the end, the champion Lightning had spent more than two months in seclusion, and had started a new trend where the entire team accepts the Cup from commissioner Gary Bettman.

THINK YOU KNOW THE STANLEY CUP?

Most people are aware of the main facts about the Cup and its history, but you can impress your friends with these four tidbits of trivia.

Equivalent U.S. dollar value of the amount originally paid for the trophy (10 guineas) by Lord Stanley of Preston, the governor general of Canada.

The maximum number of names that a Cup-winning team can engrave on the Cup.

Written and reported by Tim Kavanagh. Photography by Adrian Armstrong and Chris Robinson for ESPN. Research by Sachin Chandan and Jessi Dodge.