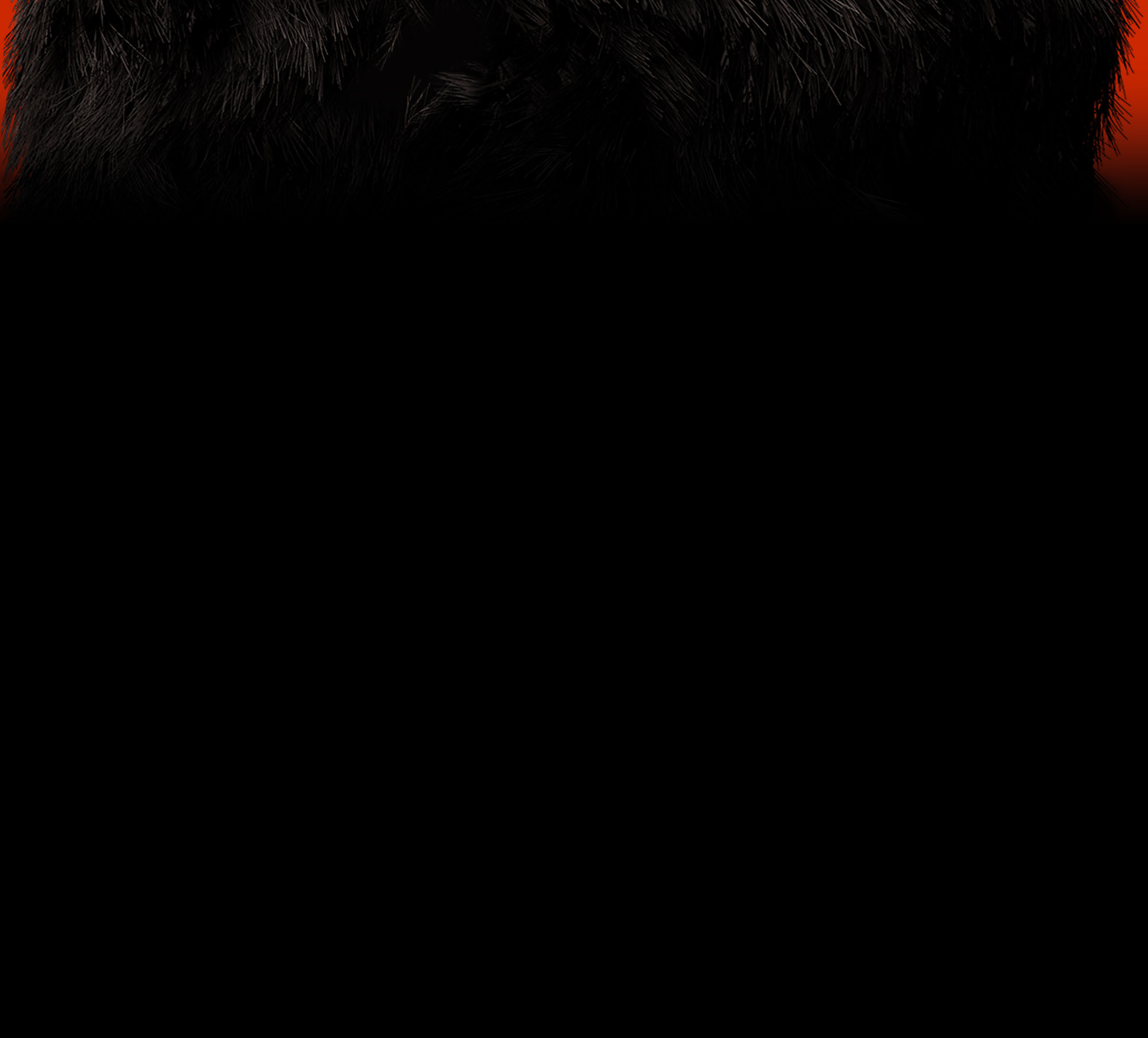 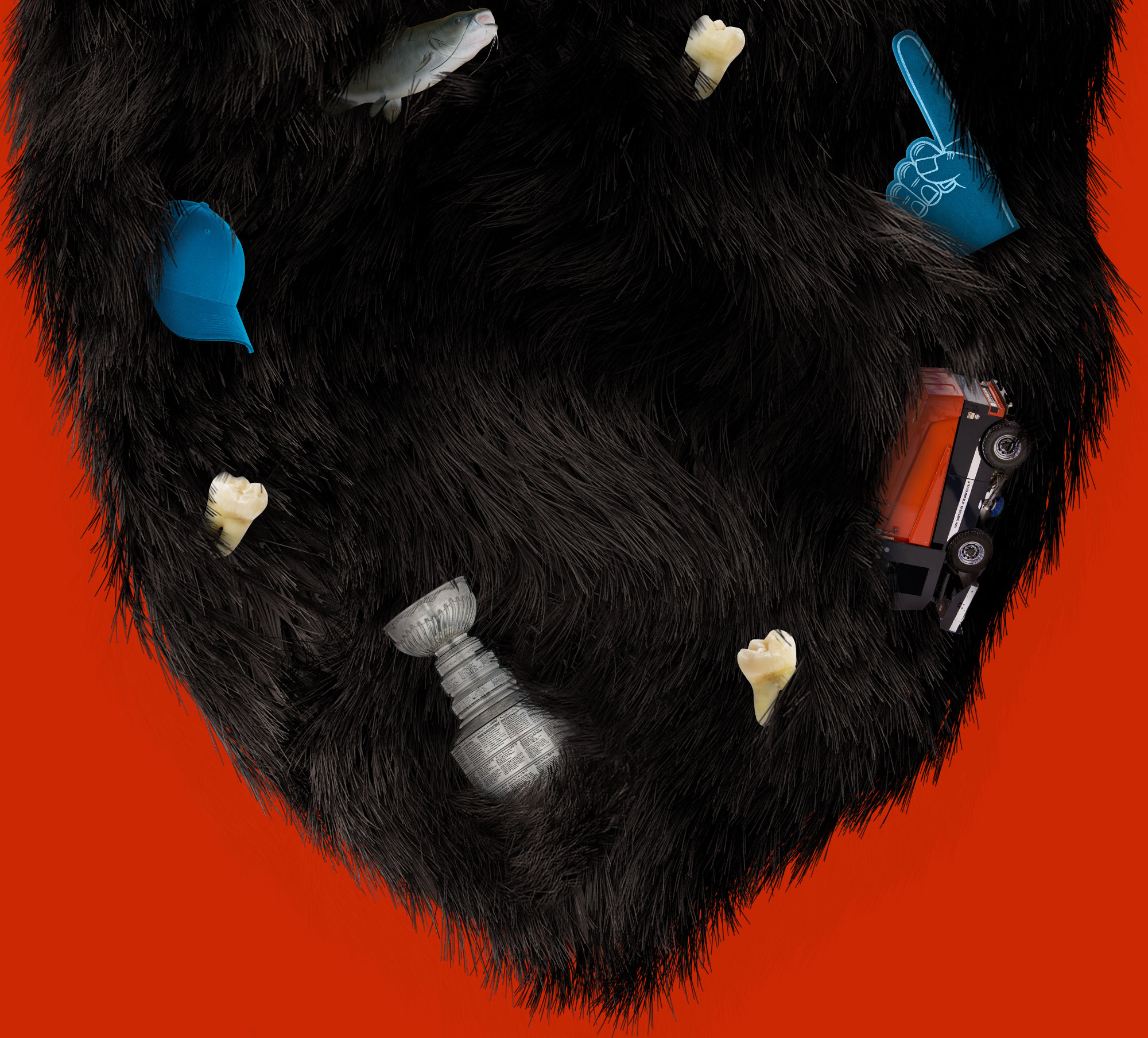 The Stanley Cup playoff beard has been an NHL tradition since the early 1980s, when the shaggy New York Islanders won four straight championships. It represents the players’ singular focus, as if even personal hygiene is sacrificed in pursuit of hockey’s holy grail. It suggests the rugged doggedness that’s synonymous with the NHL’s postseason tournament, with its grueling series and marathon overtimes. Here’s a look at the best beards to watch for in the 2022 Stanley Cup playoffs, the next generation of bushy beauties and the greatest facial forests in NHL postseason history. As Joe Thornton, playoff beard GOAT once said: “It looks pretty. But it’s hard work.” 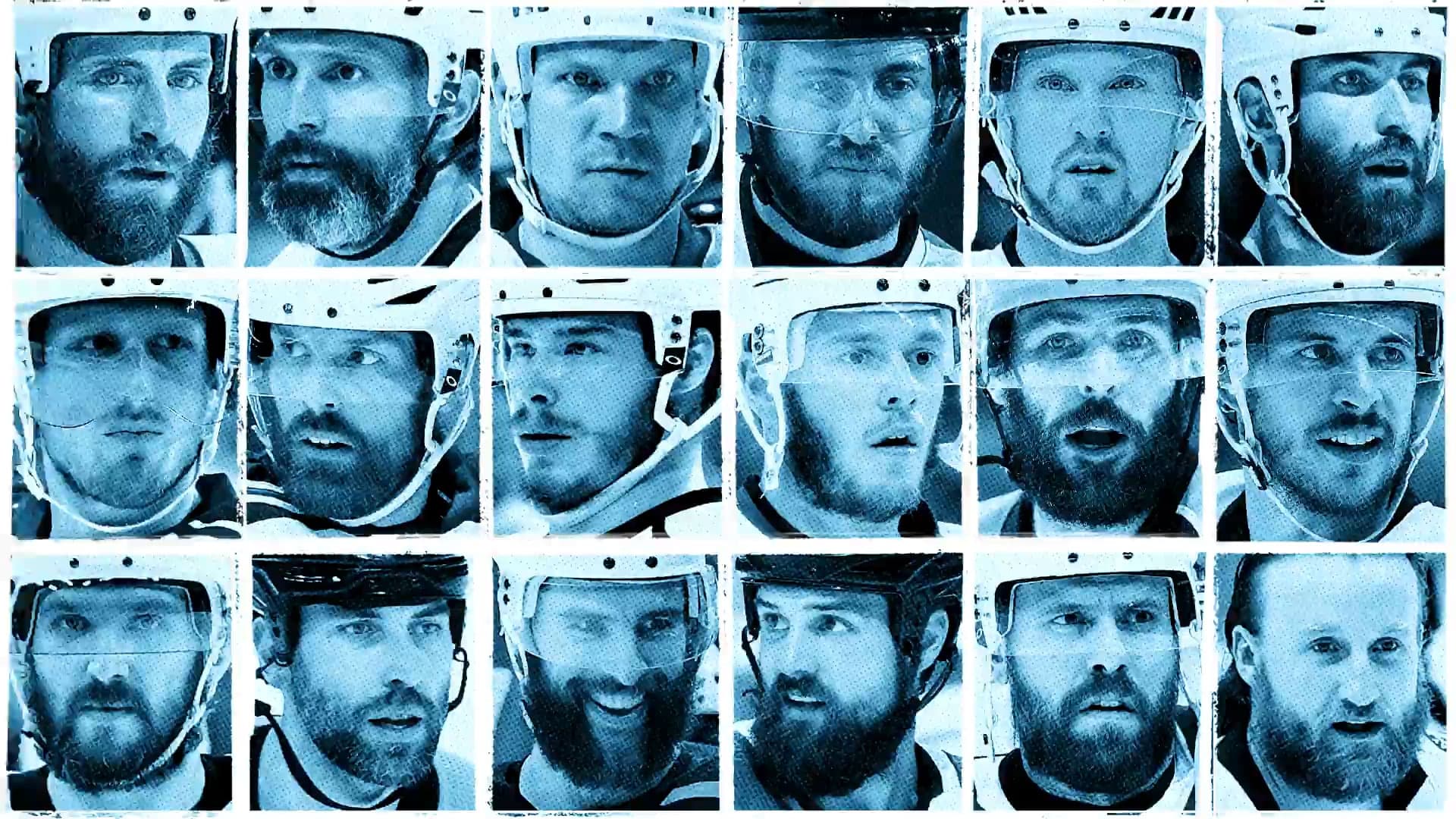 In the NHL, captains set the tone for their teammates. They lead by example on the ice with an aggressive play or a thunderous bodycheck. They lead off the ice by growing a gnarly facial thicket that says, “Put the razors away, boys, we’ve got a long journey ahead of us.” Here are some of the captains who lead with their whiskered chins. 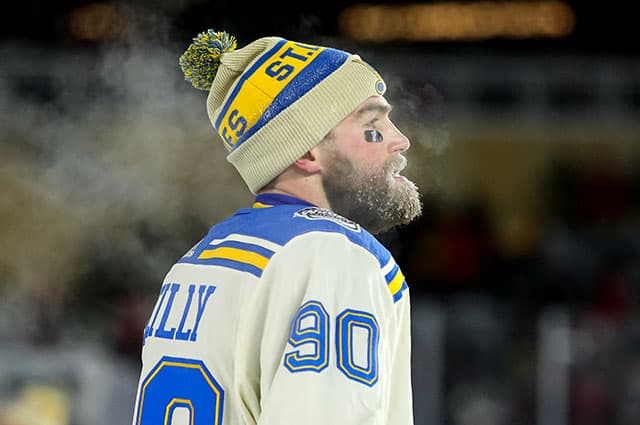 RYAN O’REILLY, CENTER FOR THE BLUES

Ryan O’Reilly’s chin bib reached legendary status when it froze solid at the 2022 Winter Classic in Minneapolis, as O’Reilly played in minus-6-degree conditions.

The 31-year-old St. Louis Blues center first started sporting a beard after being traded to the Buffalo Sabres in 2015. It reached peak bushiness in his first season with the Blues (2018-19), when he led them to their first Stanley Cup and won playoff MVP. This is not a coincidence. 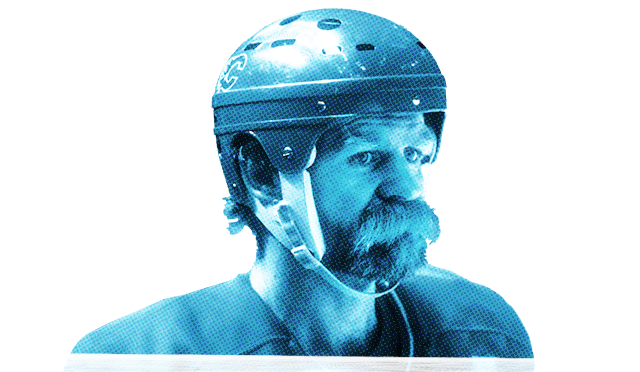 The man behind the mustache is a Hockey Hall of Famer with 500 goals. He co-captained the Calgary Flames and wore the “C” when they won the Stanley Cup in 1989. 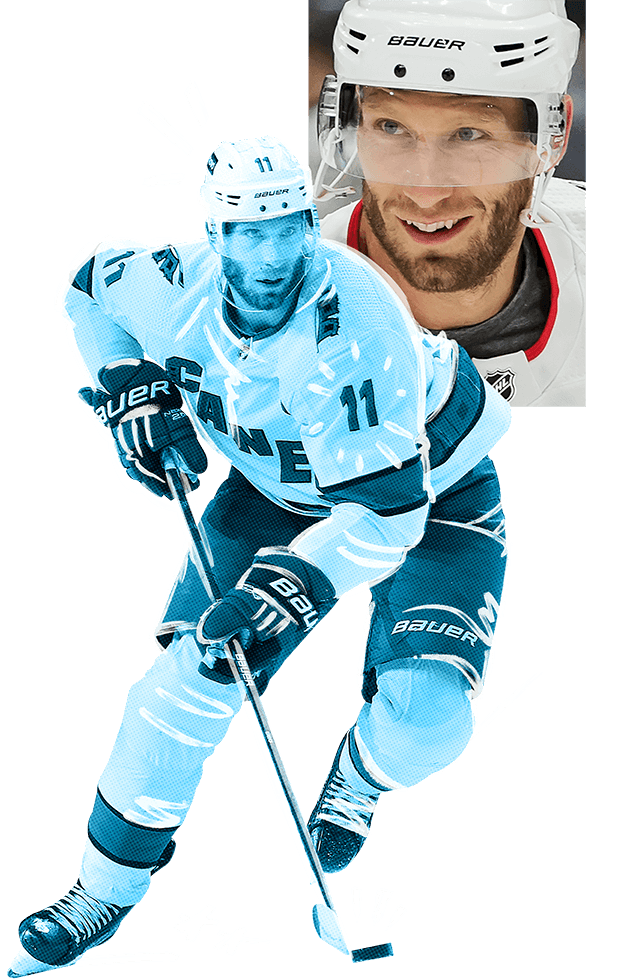 Captain of the Hurricanes since 2019, Jordan Staal’s beard is thin around his lips but climbs up his cheeks like facial ivy, making him look slightly like a statesman from colonial times.

“Considering what he’s meant to the Hurricanes, I hope Jordan Staal’s beard gets as long as the guys in ZZ Top.” 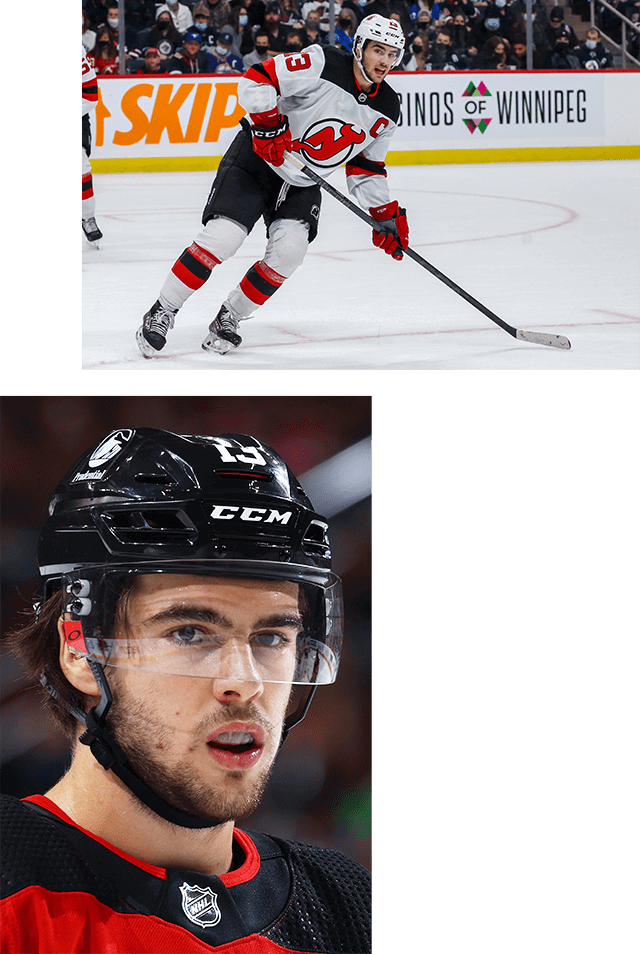 The Swiss-born center Nico Hischier usually sports the managed stubble of someone courting “The Bachelorette,” but there’s some real potential here if the Devils ever make the playoffs again. 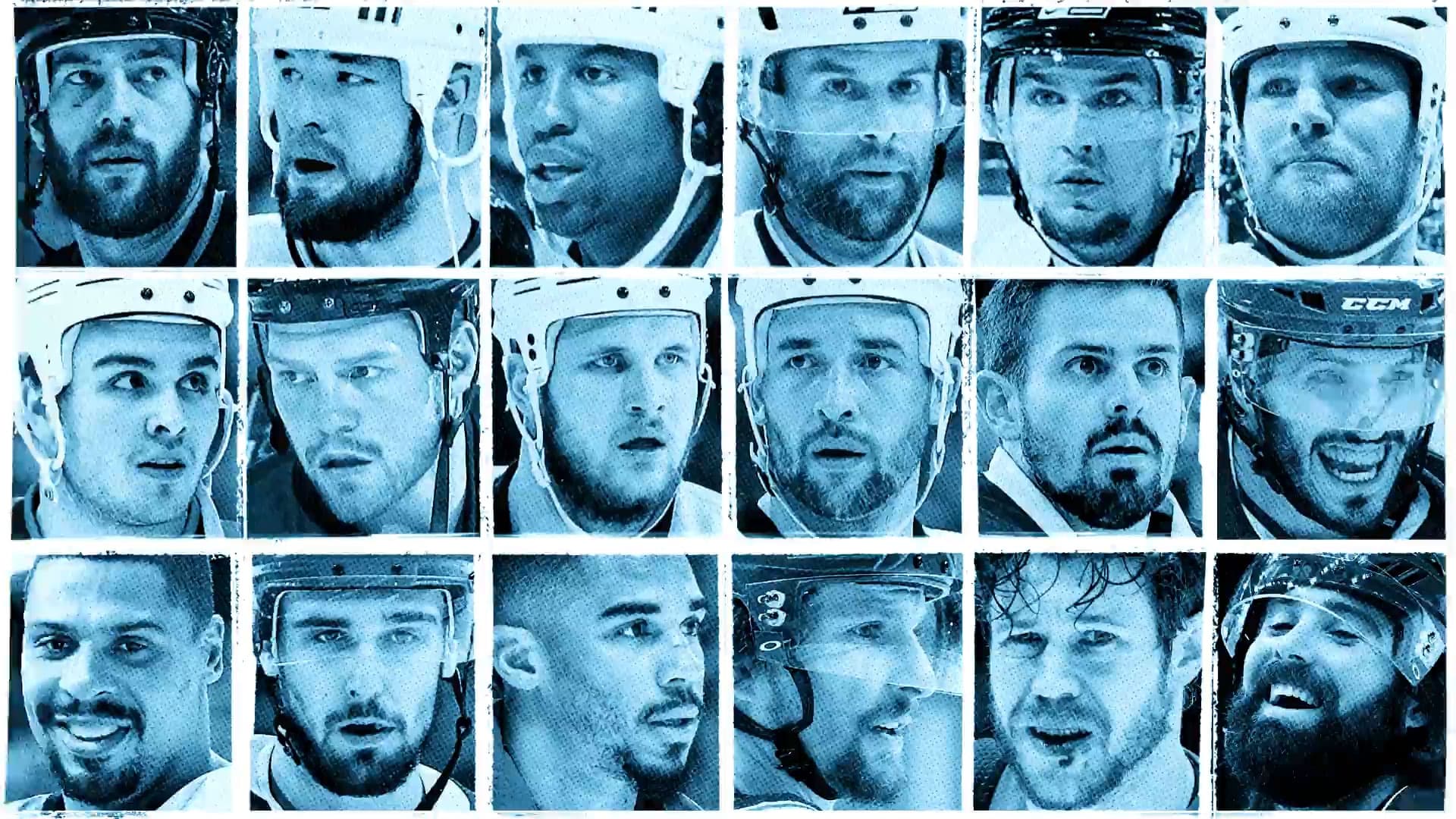 Every Stanley Cup playoff team needs a few players that can pancake an opponent with a big hit, or send a painful reminder to a foe that it’s best not to mess with their teammates. These blue-collar heroes have to look the part, which usually manifests as a group of burly men sporting even burlier beards during the postseason. 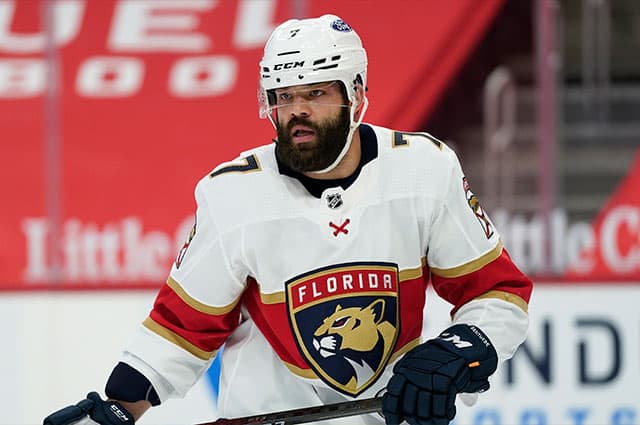 RADKO GUDAS, DEFENSEMAN FOR THE PANTHERS

He entered the NHL with a beard 10 seasons ago. It has grown alongside his reputation for being one of the league’s most devastating checkers, to the point that they’re both quite intimidating.

In the AHL in 2012, Gudas and two Norfolk Admirals teammates vowed to not shave during a six-game winning streak in fear of jinxing it. The Admirals won 28 straight games to close out the regular season, eventually capturing the Calder Cup as well. That, friends, is the power of Radko Gudas’ beard.

“It’s good. It’s always good. And when he gets it done by a barber, it’s really nice actually.” 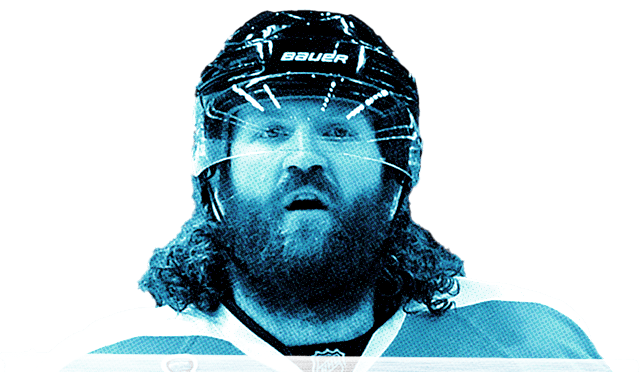 Hartnell has the second-highest penalty minutes-per-playoff game average (1:28) for any player since 2003. His scraggly beard combined with his tussled locks make him resemble a scary clown.

“Like all great beards, Hartnell’s beard is bushy, chaotic, and most importantly... orange. One can only imagine the food scraps trapped in that baby after a long playoff run. Rumor has it he was able to feed a family of four after shaving it off.” 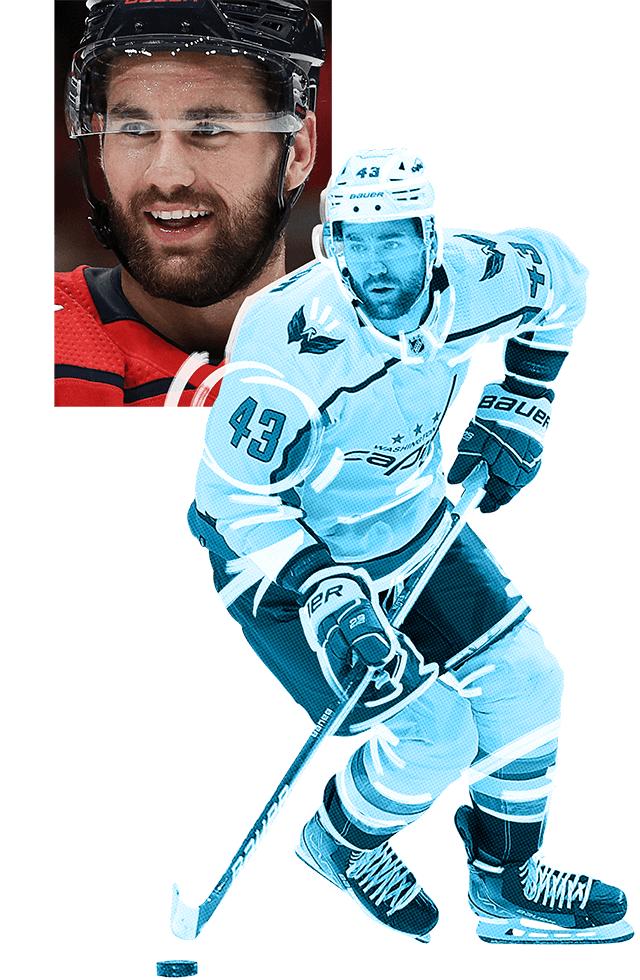 Loved by Washington Capitals fans, loathed by many others, Tom Wilson filmed a heartfelt tribute before shaving his 2018 playoff beard. “We’ve grown so, so much. But it’s time to let you go.”

“Puffs out wide at the bottom to give him that block jaw intimidating look. A beard anyone would be proud to own!” 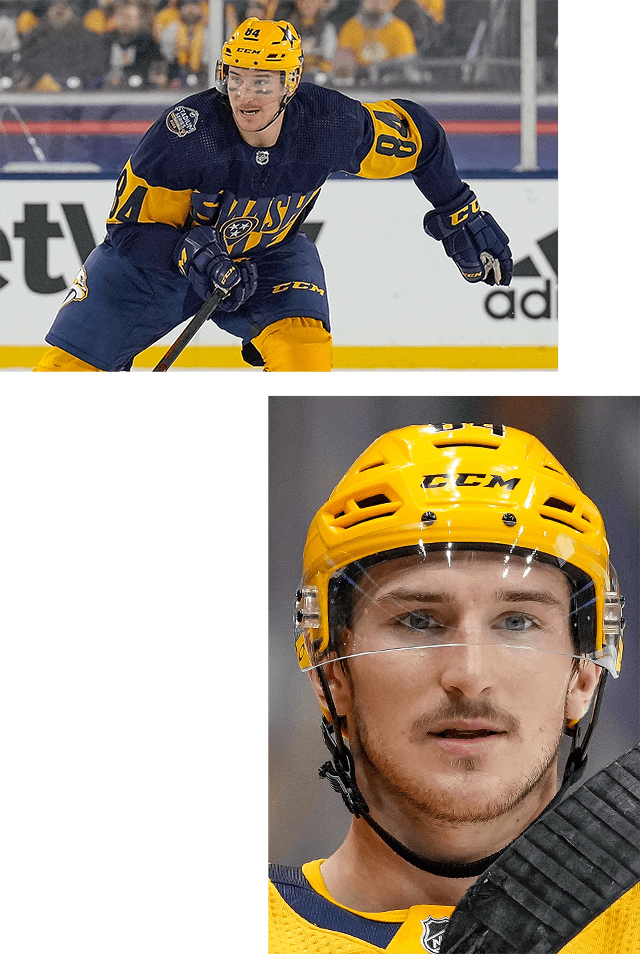 A rookie with over 40 points and 110 penalty minutes is a rarity in the NHL. The Predators have high hopes for Tanner Jeannot, and we hope he one day sprouts a playoff beard worthy of a country outlaw. 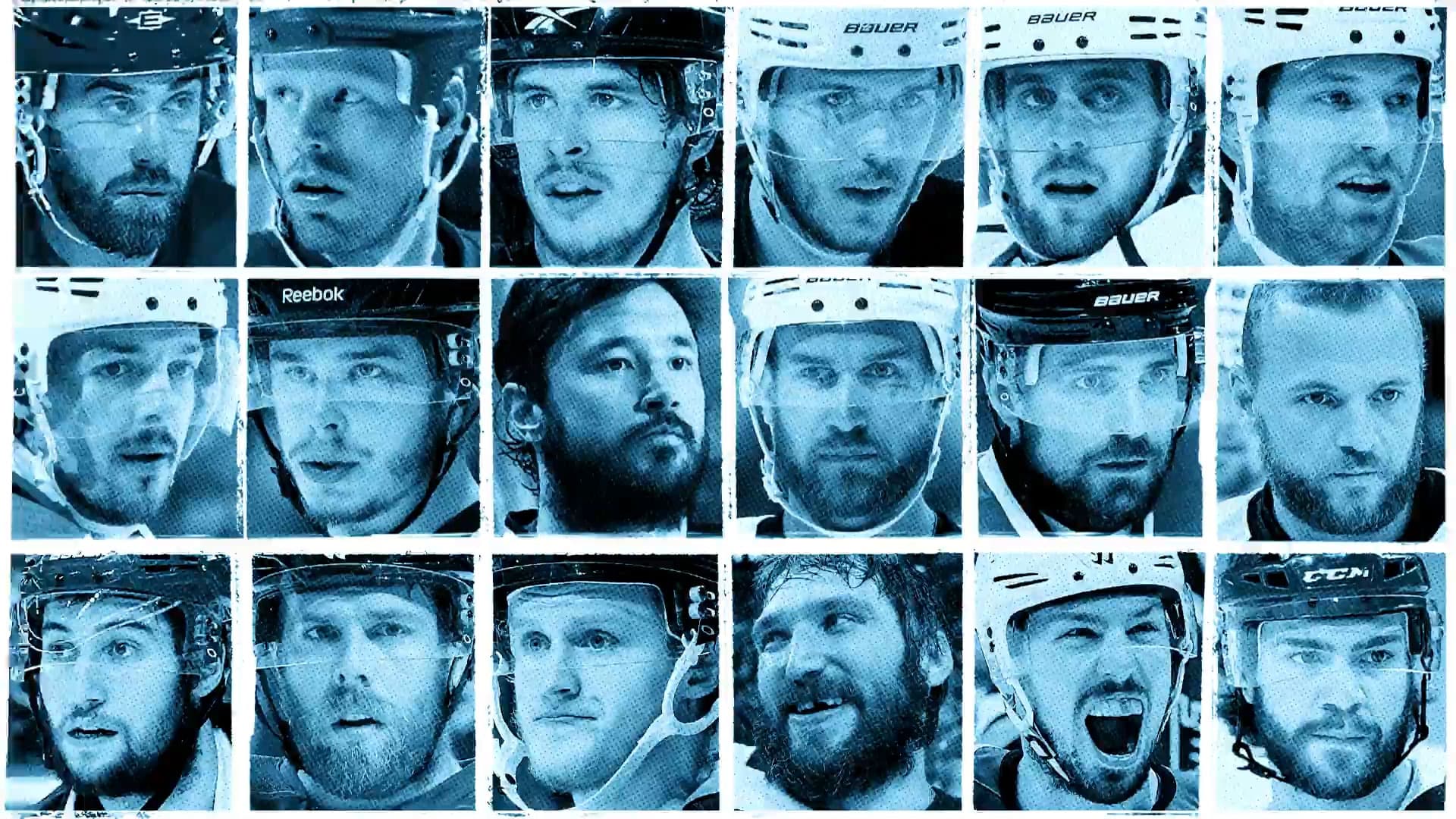 NHL players are notoriously superstitious. It’s in the way they tape their sticks, sequentially put on their gear or warm up before games with the same routine. Those quirks intensify when a player gets on a goal-scoring roll. Hence, offensive stars are natural candidates for the playoff beard and its mythic properties. 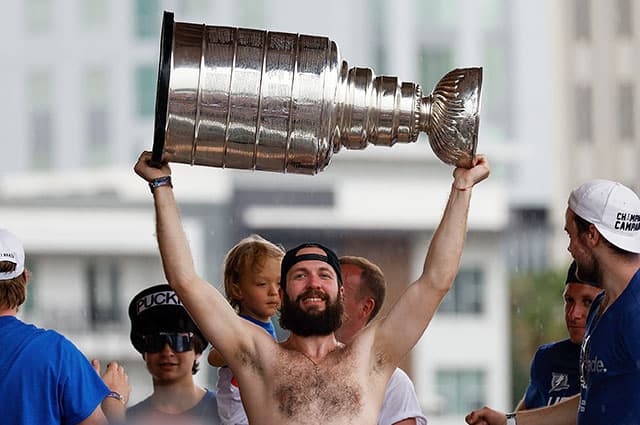 The star winger slowly transformed into a Russian bear during their lengthy playoff runs to consecutive Stanley Cup championships, before his beard was soaked in celebration in their boat parades.

Kucherov’s playoff beard was immortalized during a raucous, shirtless news conference that the Lightning star hosted after his team won the Stanley Cup in 2021, as it engulfed cans of light beer that he chugged between reporters’ questions. Between face and chest, it may have been the most hirsute postgame interview in playoff history. 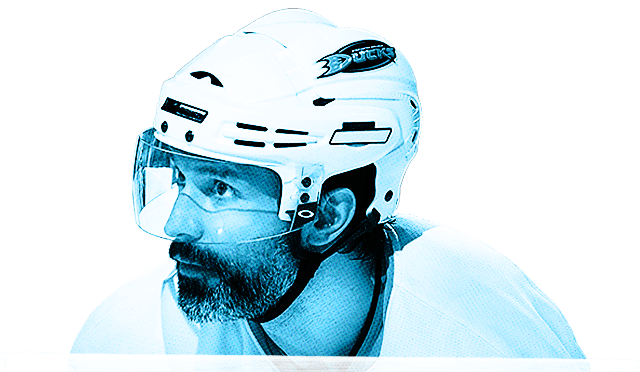 One of the best offensive defensemen of all time, Niedermayer won his fourth Stanley Cup in 2007, skating for the Ducks and sporting a lustrous beard with more salt and pepper than a spice rack.

“It should surprise no one that he could dominate the facial hair game just like he did everything else. And for a guy who played 35 minutes a night and was omnipresent on the ice, it remained sweat-free.” 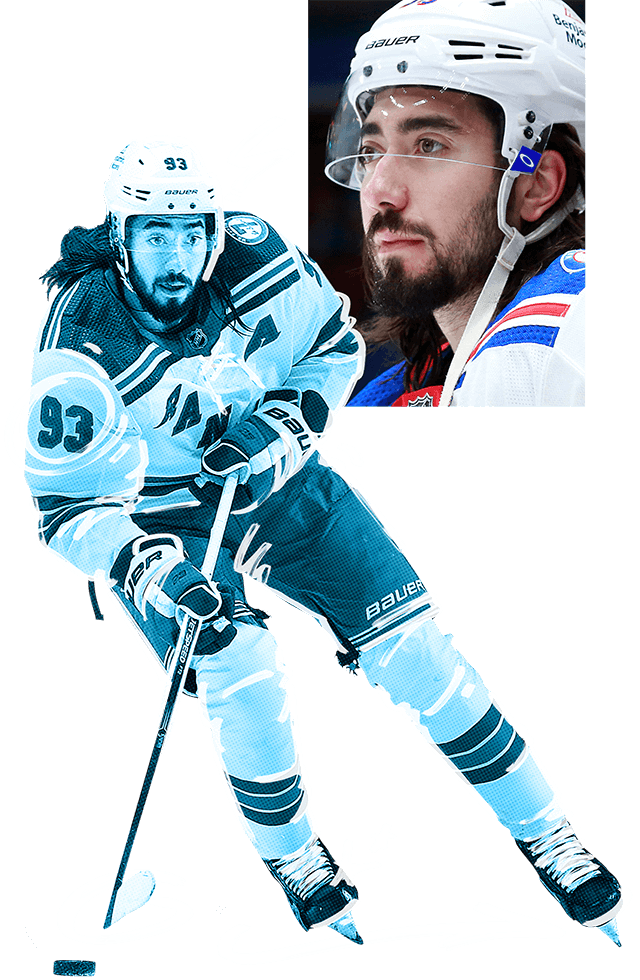 Rangers center Mika Zibanejad’s well-maintained beard, kind eyes and flowing hair make him look less like one of the NHL’s top scoring forwards and more like a Messianic Renaissance painting.

Subscribe to get exclusive analysis from Greg Wyshynski, full-game replays of all playoff games, nightly highlights on In The Crease, and much more. 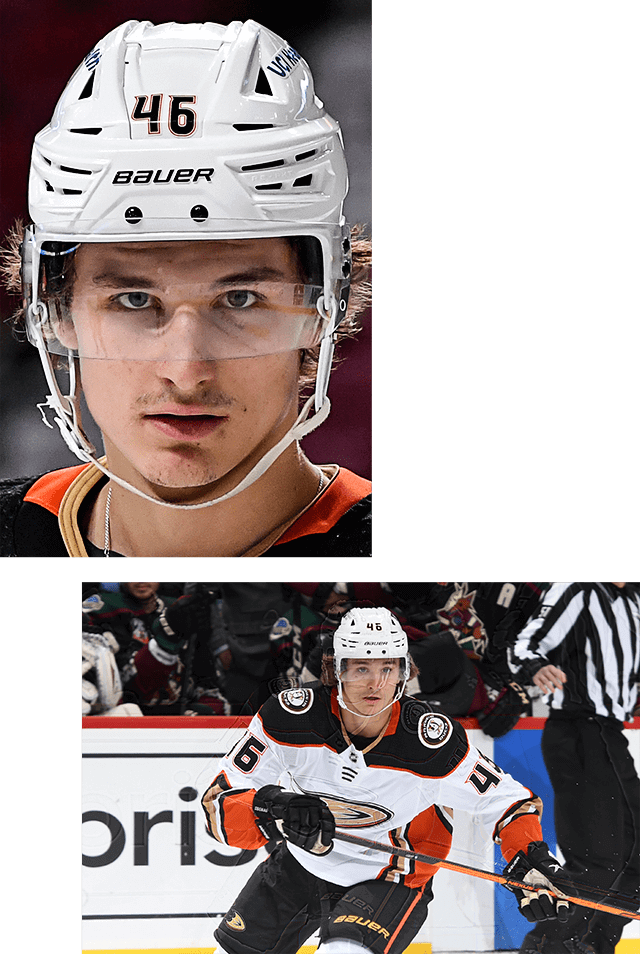 Can the Ducks’ fresh-faced rookie center even grow a beard? We’ll find out eventually. But if he can, we’re confident Trevor Zegras will grow facial fur that’s unique, inventive and infuriating to old-school hockey men. 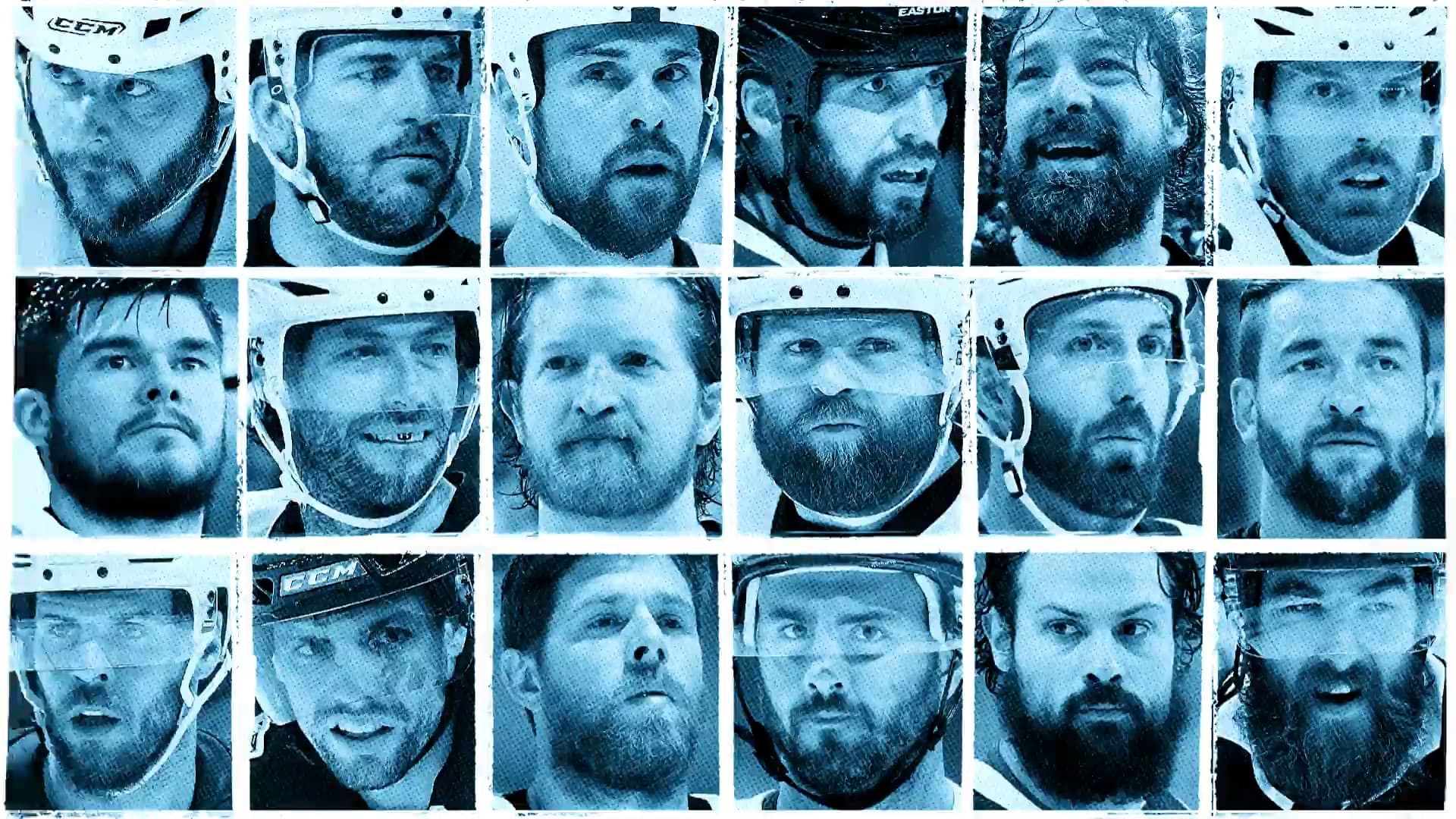 Hockey players don’t just become veterans. They become "grizzled" veterans. The term “graybeard” is more than applicable to NHL players who still roll with the tradition after they’ve gone over the hill. This is essential for the postseason. How else are we supposed to identify "the old guy we’re hoping to see finally win the Stanley Cup" if he doesn’t look the part? 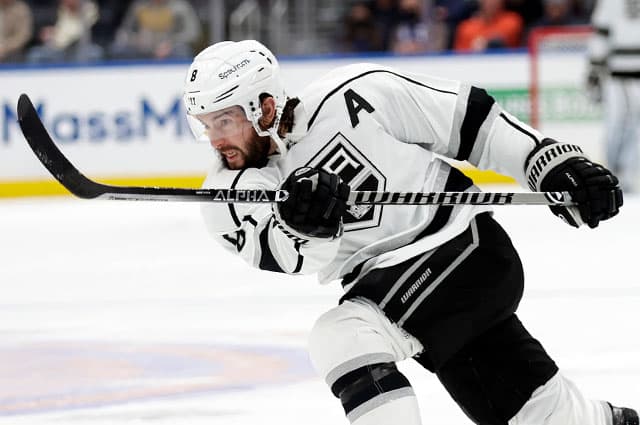 DREW DOUGHTY, DEFENSEMAN FOR THE KINGS

Doughty personified the Kings’ Stanley Cup journeys with his gap-toothed maw surrounded by four rounds of playoff foliage. The injured defenseman will still conjure that follicle spirit while watching his teammates this postseason.

Doughty once joked that his video game beard was more generous than his actual scruff. What it lacks in depth it make up for in chaos, especially when combined with the gap in his teeth.

“The deeper Drew gets into the playoffs, the better he gets. Same with his beard.” 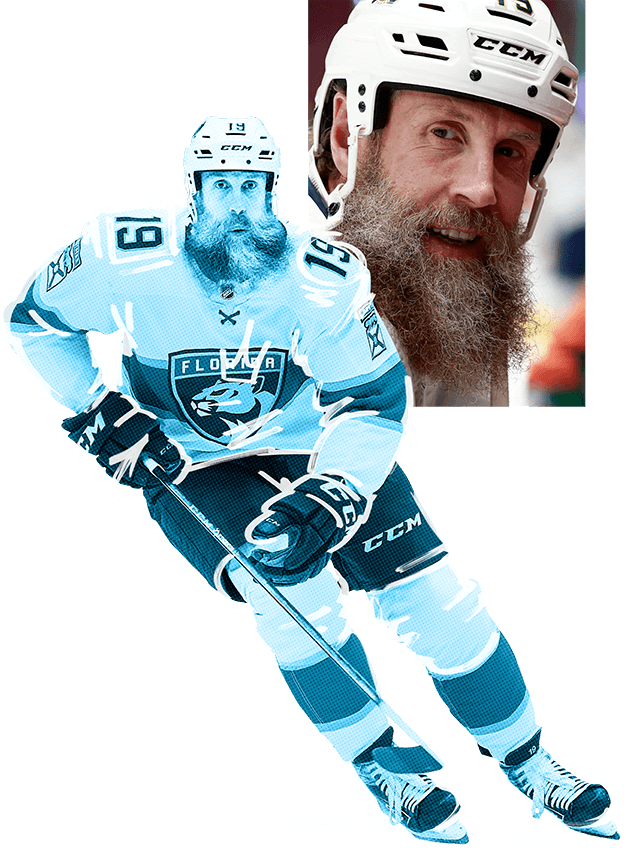 One of the greatest beards in sports history belongs to Joe Thornton of the Florida Panthers. It resembles a forest floor covered in lichens or the sky before a thunderstorm. His beard somehow looks like the pattern on an expensive handbag and that of a prospector in 1849. It deserves to be dunked into the bowl of the Stanley Cup.

“That’s dedication to the craft there. It’s multicolored. It’s epic.” 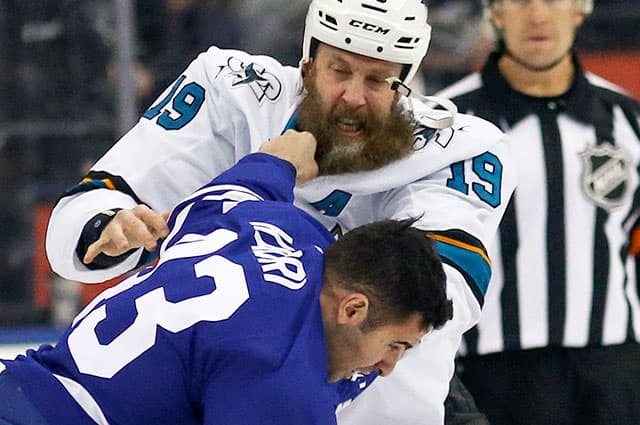 Having a resplendent beard has its challenges. In 2018, Thornton and then-Toronto center Nazem Kadri had a fight that ended with a chunk of Thornton’s beard hitting the ice like a tumbleweed.

“I have no idea how that happened. I thought I was a hockey player, not a barber.” 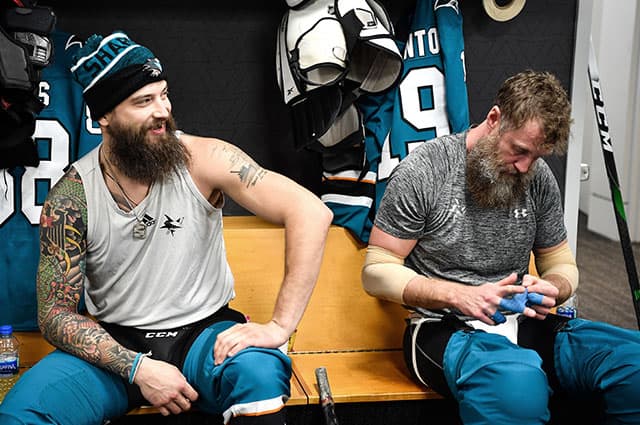 Between Joe Thornton’s multicolored masterpiece and the forest thriving on the face of Brent Burns, there was barely room in the San Jose Sharks’ locker room for the rest of their teammates.

No hockey beard examination would be complete without a look at the men wearing the fancy, decorated masks. Plus, have you ever wondered how long players keep their playoff beards?

WHAT ABOUT THE GOALIES?

Goaltenders simultaneously have the most outward individuality of any player on the ice and the most mystery. They can customize their masks as tributes to their personal lives and personalities. Yet those masks also hide their faces and, in turn, the splendor of their playoff beards. We’re left waiting for them to flip their lids for a squirt from a water bottle to catch a follicle glimpse. But when we do, it’s usually quite a sight.

Among the best beards in the playoffs for netminders: Carolina’s Frederik Andersen, the well-manicured Dane; Boston’s Jeremy Swayman and Florida’s Sergei Bobrovsky, whose beard potentials are evident; the veteran scruff of Edmonton’s Mike Smith; and Dallas backup Braden Holtby, whose playoff beard looks like a cross between Bradley Cooper in “A Star Is Born” and a Sasquatch. 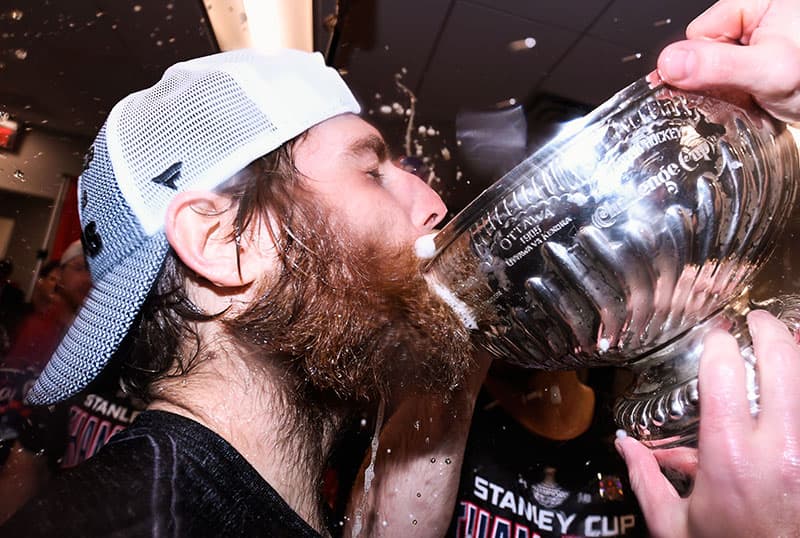 Holtby is hoping he gets his beard near the Cup again this year.

WHEN THE BEARD GOES

For many players, the playoff beard gets eliminated right after their team does. “It was always pretty quick afterwards. You felt like it was a clean slate again,” said former NHL defenseman Ken Daneyko. A three-time Stanley Cup winner, Daneyko said the champs would usually keep their beards until the official team Cup photo. “The dressing room bathroom would be an absolute mess on photo day, with piles of hair all over the place,” he said. “Because it’s a double shave: You gotta use the electric razor to trim it down, and then the blades if you’re going completely clean.” 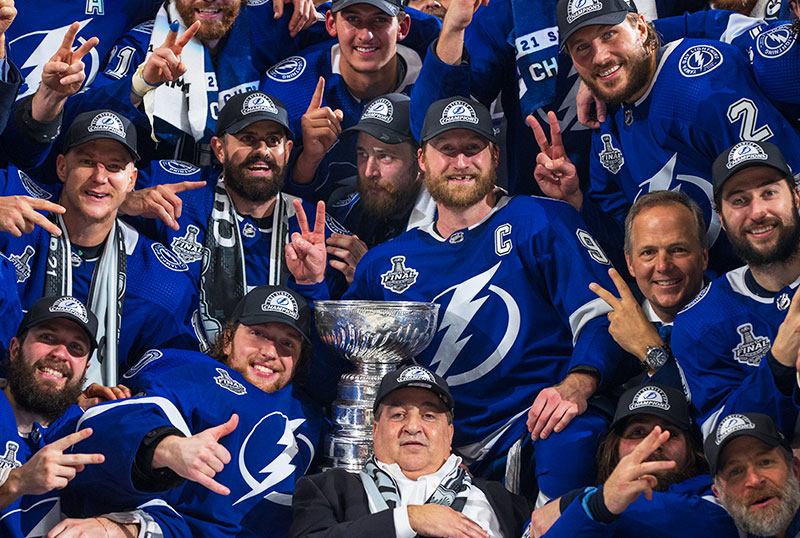