KANSAS CITY, Mo. -- His spiky brown hair pokes haphazardly through patches of bald, and most days, Mike Sweeney seemingly fits in more with the elevator music that is floating through the Royals clubhouse than with the rowdy game of cards trying to drown it out. Especially this game. It's between six young Latin-American baseball players, and they're chugging Gatorades, laughing and talking smack. All of it is in Spanish.

It's a clique, really, that goes on in clubhouses throughout the league. Here, the Latin-American players can speak in their native tongue and hang with the guys who know where they've been. They feel comfortable. They can't help it if that means their American teammates get shut out.

Sweeney walks past the card table, slaps hands and smiles.

"Good morning," he says in English. 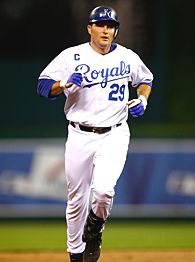 Kansas City's 34-year-old captain from California has become fluent in Spanish so he can relate to a Hispanic population that now accounts for about one-fifth of the Royals' active roster.

"I think it makes them feel safe," Sweeney says. "A lot of guys, if they can't communicate in their native tongue, they feel insecure.

"If they invite me in, I know what they're talking about so I can communicate."

Sweeney knows what it's like to feel isolated. He played in Puerto Rico for two winters and didn't have the language down despite taking three years of Spanish classes in high school. When he was 18 and playing rookie ball in Florida, he bunked with a Mexican player who didn't speak English. They spent that year learning from each other.

The lessons started, informally, in 1991 when he met Rev. Domingo Gonzalez, a Cuban native living in Florida. Sweeney was homesick and bored and bummed a ride to church from a teammate for $5. By the end of mass, he realized he didn't have a way home. Gonzalez offered to give him a ride, but only if he stayed for the Spanish mass. They became good friends and met every Sunday that year at 8 a.m. for breakfast and Spanish mass.

Sweeney still refers to Gonzalez as his "spiritual father."

"That was one of the highlights of my career," says Sweeney, who's played in five All-Star Games. "He not only helped me out learning the language, but it was the first time I was away from my family. Here was a Latin stranger opening up his heart to me. It really helped keep me on the right path when I started my new life in baseball."

A Spanish-speaking mentor is something Royals general manager Dayton Moore wishes every Latin-American player had when they transition to the major leagues. Moore's roots are international baseball, and he's familiar with lost looks and displaced seasons. When he was in Atlanta, he created a cultural development position to ease the new players in. Next year, they'll add the same job in Kansas City.

Moore knows how much Latin-American players have to learn. They are sent to academies, sort of boarding schools for baseball players. They're given cultural lessons and general tips on American manners. Some things are basic, like where a napkin goes at dinner and which fork works for the salad. Others aren't so basic. In Latin culture, Moore says, it's considered disrespectful to look an authority figure in the eye. In the United States, if a player doesn't look in a coach's eyes, he's wandering. 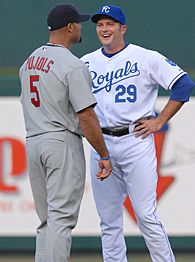 "We take them to restaurants and make sure they know how to order," Moore says. "We help them open up bank accounts.

"It's hard for them to reach their ceilings as baseball players when their lives are out of balance."

Future Royals are required to take three months of English classes, three times a week. But that's kind of like splitting the atom in a semester. Royals pitcher Joel Peralta says he took the classes but still couldn't speak English when he arrived in the United States from the Dominican Republic seven years ago.

He picked up on the language through clubhouses and television. Now he serves as a translator for teammate Leo Nunez, whose English is spotty.

Peralta says it's natural for the Latin-American players to hang out together. They go to meetings together and play jokes on each other in the clubhouse. Some days, a pregame setting is full of elevator music mixed with hard-core metal and English flowing with Spanish.

"We like to be together everywhere," Peralta says. "We feel more comfortable between us because we know each other more than we know anybody else. It's always going to be like that."

When Sweeney speaks Spanish, Peralta says, the Latin American players appreciate it. They know he's making an effort to relate.

"If we get with a couple of American guys, we're going to speak English because we want them to understand what we're talking about," Peralta says. "But the Latin guys, between us, we are always going to speak Spanish."

Elizabeth Merrill is a senior writer for ESPN.com. She can be reached at merrill2323@hotmail.com.