Munoz was inducted into the Pro Football Hall of Fame in 1998. In his enshrinement speech, Munoz spoke about the importance of faith in his life. The 49-year-old now devotes most of his time to running the Anthony Munoz Foundation, designed to help children grow physically and mentally. ESPN.com, as part of Hispanic Heritage Month, asked Munoz about the growth of football in the Hispanic community.

ESPN.com: When did you start playing football and what attracted you to the game?
Munoz: I was just really into athletics at a young age. I have two older brothers and they played football, so I started playing sandlot football at a very young age. I was a quarterback when I started playing. I was not really exposed to tackle football until high school. From third to eighth grade, I played QB and I played flag football. I really enjoyed it because I was a baseball player -- I played third base and pitcher, so as a QB I liked throwing the ball.

ESPN.com: Why do you think baseball is more popular in the Hispanic community than football?
Munoz: If you look at the major leagues, a lot of Hispanic players do come from the Dominican and other countries. Maybe it is because it is not that expensive. I know that when I was growing up, we did not have the funds to get all the equipment to play tackle football. I think maybe it's a financial thing or maybe it is just your heritage. I grew up second generation [immigrant] in California, and my grandfather who came from Mexico played baseball. Maybe it is something that is passed down through generations. It is probably a combination of the issues I just talked about.

ESPN.com: Does the issue of funds remain today?
Munoz: I think it is to a certain degree, especially as you get school levies that are not passed, and often you have to pay to play. 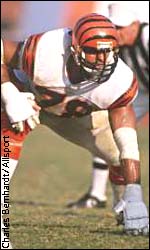 ESPN.com: Tom Flores, who is Hispanic, became the first minority coach to win a Super Bowl in 1981. What was his impact on you and other Hispanic football players?
Munoz: I think guys like that have an impact. Hopefully, playing through the 1980s like I did, you look at myself and Max Montoya -- who were kind of the first Hispanic linemen -- and [people] say, "Maybe we can do that. Maybe there is a place in the NFL for us."

When you look at a guy like Tom Flores who has been successful, that is a great tribute for a guy who played, coached and won Super Bowls. I don't think many people realize that. He played with the Chiefs and was head coach of the Raiders when they won a Super Bowl.

ESPN.com: Did you encounter any resistance when you played because you were Hispanic?
Munoz: It was not an issue. I come from a relatively huge family. There was a lot of support and encouragement. I think it was just a matter of being successful. They [teams] looked at me as a football player. At least in my experience with a Hispanic family, they kind of rally around you with the attitude of let's do it, and we are all behind you. A lot of athletes don't like being characterized by their race. Some Hispanic footballs players might want to be known as just a football player and not a Hispanic football player.

ESPN.com: Is that the case with you?
Munoz: The thing with me is I don't shy away from being a role model. Some guys don't like being role models and they don't like to be characterized as a Hispanic football player. I look at myself as a role model for all young people and am thankful that I am part of the Hispanic community. I want to use the platform to the fullest.

ESPN.com: When you see successful Hispanic players today like Jeff Garcia (Tampa Bay Buccaneers) or Roberto Garza (Chicago Bears), how does that make you feel?
Munoz: I am thrilled. Not only are they producing on the football field, but they use their platform in a positive way in the community and whoever they come in contact with. These are the type of guys that excite me because they get it. They get that it [their ability] was a gift; now they can gift young people and give them opportunities. When I see that, I get really excited about it.

ESPN.com: What are some of the bigger obstacles to having more Hispanic players in the NFL?
Munoz: It starts at a younger age. A lot of it depends on what you are accustomed to being around and what your family likes. I know that soccer is big in this country. There are a lot of young people that want to play soccer. It is great that they're active. It is hard to say that is an obstacle. There is so much for young people to get involved in these days. I would like to see these young people who maybe spend all their time playing video games or computer games get out and be active.