Shawn Green is a vital player in the Los Angeles Dodgers' run toward the playoffs. The All-Star first baseman hit a two-run, ninth-inning home run Sunday to lift the Dodgers to a 7-6 victory over the Colorado Rockies.

And yet, in the wake of that spectacular blow, Green left open the possibility that he might not play two pivotal games this week against the San Francisco Giants -- the team sitting right behind the Dodgers in the standings. Yom Kippur, the Jewish Day of Atonement, begins at sunset Friday and Green faced a difficult decision: Follow his faith or try to help his Dodgers teammates beat the Giants in San Francisco?

Fans of the team and people from the Jewish community eagerly awaited a decision. Green deflected reporters' questions earlier this week, saying, "I don't want the media making a big deal about it."

It's a question that has come up almost every year, but has taken on more relevancy in the post-9/11 landscape.

In the end, Green compromised. After a closed-door meeting with manager Jim Tracy before the Dodgers' loss to the San Diego Padres on Tuesday, Green decided to play in Friday's night game against the Giants, then sit out Saturday's day game. He made his decision public on Thursday.

"Playing one of the two is the most consistent with my beliefs as a Jewish person," Green said before the Dodgers moved 1½ games ahead of the Giants. "I'm not orthodox. I am Jewish and I respect the custom. ... I feel real good about my decision."

Green has missed only 10 of 800 games in five seasons with the Dodgers. One came when he sat under similar circumstances in 2001, with the Dodgers locked in a fight for a playoff spot. His decision ended his streak of 415 consecutive games played, then the longest in Major League Baseball, and came just two weeks after the Sept. 11 terrorist attacks.

Last year, it wasn't an issue because Yom Kippur, the holiest day on the Jewish calendar, fell during the playoffs. Complicating the situation this season is a quirky schedule that features two games inside 24 hours. The Giants series begins Friday night and the second game starts at 1 p.m. to accommodate television. Yom Kippur ends at sundown on Saturday.

"It's a personal decision," Dodgers owner Frank McCourt said, "and it's his decision to make."

It isn't always that simple.

The clash of two passions
Like politics, religion and sports is a volatile topic and can inspire passionate debate. In the charged post-9/11 landscape, the intersection of religion and sport has made for some high-profile controversy. It is a seemingly inevitable conflict; sports is about team, while religion is an intensely personal issue of faith.

Sports and religion have become inexorably intertwined. Isn't the ultimate football play -- a long scoring pass with time running out -- known as a Hail Mary? Christian players sometimes gather in prayer circles after games. The Fighting Irish of Notre Dame carry the banner of Catholicism. Kurt Warner and Reggie White have unabashedly given their faith, and their games, to God.

Even Pope John Paul II has engaged the issue. He told a gathering of bishops last week that the ranks of the faithful were failing to keep the Sabbath holy -- because of sports and entertainment events.

The sanctity of Sunday has been a recurring theme for the 84-year-old pontiff, who was a soccer goalie growing up in Poland and has entertained several prominent soccer teams at the Vatican. And while John Paul II's focus was largely soccer games, NFL games in America are played mostly on Sundays.

Earlier this summer, the Pope wrote: "When Sunday loses its fundamental meaning and becomes merely part of a 'weekend,' people stay locked within a horizon so limited they can no longer see the heavens."

Richard Lapchick, the noted sports sociologist, was asked by the Boston Herald to respond to similar comments from the Pope in late March.

"I said something like, 'A lot of people treat sport like religion,' " recalled Lapchick, the director of the Institute for Diversity and Ethics in Sport at the University of Central Florida. "I've talked about fairly controversial stuff over the years, but I've never had a negative reaction like this. It was a torrent. It was something like 40 to 50 e-mails a day, for a couple of weeks.

"It's because religion is such an emotional issue for so many people," he said, "both in positive and negative ways."

Joseph Kosek, an American Studies lecturer at Yale University, frequently deals with the topics of modern American religion and culture.

"Maybe there is a sense that these baseball, basketball and football teams represent a secular religion," Kosek said. "You could look at sports and religion, perhaps, as two competing religions."

Running into history
Women athletes, surprisingly, are a relatively recent phenomenon in the history of the Olympic Games.

It wasn't until 1912 that women first competed in swimming and 1928 when they were permitted to run track and field events. In 1960, women were first allowed to run in races beyond 200 meters. For Muslim women, the most recent breakthrough came at the 2004 Olympics in Athens. 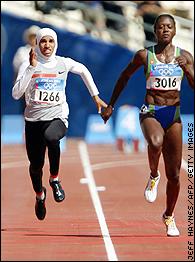 Afghanistan's Robina Muqimyar, Rakia al-Gassra of Bahrain, Iraq's Alaa Jassim, Danah al-Nasrallah of Kuwait, Palestine's Sanna Abubkheet and Fartun Abukar Omar of Somalia were the first Muslim women to represent their respective countries in the Olympics. None of them came close to winning medals, but that was hardly the point.

Perhaps the most difficult journey belonged to the 17-year-old al-Gassra, who overcame the objections of fundamentalists in her village to run the 100 meters at the Olympic Stadium. Only the skin on her hands and face was visible; she wore a white head scarf decorated with a Bahrain flag, a long-sleeved shirt under singlet and black tights.

The other Muslim athletes adopted a wide range of track gear. Abukar wore black tights with a blue bandanna on her head. Muqimyar favored loose-fitting green tights and a T-shirt. The 16-year-old Nasrallah, who wore a T-shirt and tight shorts, set a national record with a time of 13.92, but finished last in her heat. Jassim, on the other hand, chose a form-fitting sleeveless black singlet and shorts combination more in line with the other sprinters.

"It's a matter of choice," she told the Chicago Tribune.

Ahmed Bedier, director of the Tampa office of the Council on American-Islamic Relations, was encouraged by the appearance of the Muslim runners.

"It shows the diversity of the Olympics," Bedier said. "The whole theme of the opening ceremonies was the colors and the cultures of each unique nation. We here in America should embrace that concept. We are a nation of immigrants. None of us -- except the Native Americans -- were born to this land."

There are an estimated one billion Muslims worldwide, approximately two million practicing in the United States. Kareem Abdul-Jabbar, the Hall of Fame basketball player, changed his name from Lew Alcindor and boxer Cassius Clay became known as Muhammad Ali, the first prominent athletes to convert to Islam. You can find Muslims sprinkled across rosters in the NFL and NBA. Wide receiver Az-Zahir Hakim and linebacker Wali Rainer, for example, play for the Detroit Lions.

"There's a gray line there, but I don't feel discriminated against," Rainer has said. "You try to maintain respect for yourself and your beliefs, and respect for your teammates."

Saleem Rasheed, a linebacker for the 49ers, regularly fasts from sunup to sundown during the Muslim holy month of Ramadan, even though it coincides with the critical end of the regular season.

Shareef Abdur-Rahim, a 6-foot-9 forward with the Portland Trail Blazers is a proud Muslim.

"No. 1, with me, you are getting a God-fearing man," he told The Oregonian when he arrived in a trade from the Atlanta Hawks last winter. "I sincerely feel like everything I do in good times and bad times, I always have my faith to lean back on."

Perhaps more than any other active athlete, quarterback Kurt Warner is identified with his faith. Last Super Bowl Sunday he angered St. Louis Rams head coach Mike Martz when he suggested that his religious beliefs might have contributed to the loss of his starting job to Marc Bulger.

"[Rams] coaches say I was reading the Bible too much and it was taking away from my play," baptistpress.com quoted Warner telling a group in Houston . Warner later said the comments were taken out of context.

Warner, now a member of the New York Giants, was asked last month why he wears the No. 13. "It's really a representation of my faith. So many people think the No. 13 is an unlucky number. To me, it's not about luck -- it's about my Lord, it's about Jesus being in control of my life."

Green, meanwhile, does not wear his religious zeal on the sleeve of his Dodgers jersey, but clearly he respects the tenants of Judaism. Of the more than 16,000 major leaguers through history, only 143 are known to have been Jewish -- less than 1 percent, although Jews make up nearly 3 percent of the U.S. population.

The first Jewish baseball player is believed to be Lipman Pike, back in the 1860s. The first important star was Detroit Tigers first baseman Hank Greenberg, who entered the majors in 1934, 13 years before Jackie Robinson broke baseball's color line. That same year, with the Tigers in a hot pennant race, Greenberg asked local rabbis to find him an exemption that would allow him to play on Rosh Hashanah. Greenberg played and led the Tigers to a win, but the next day a local newspaper wished him a happy new year -- in Hebrew. On Yom Kippur, Greenberg attended synagogue instead of playing.

Yale's Kosek, whose lectures for the next several weeks will focus on Judaism, wonders if Greenberg and Koufax received hateful letters from fans of the Tigers and Dodgers, respectively.

"In the case of Judaism," Kosek said, "there is such a range of practices. Baseball, through the Jewish players, is a kind of an easy public way to identify with Judaism. It reminds me of the debate over Joe Lieberman and how he would balance being the vice president and an orthodox Jew."

In other words, if he wasn't a politician, few would care how the religious responsibilities of the U.S. senator from Connecticut would affect his job performance. The same is true of Shawn Green. But because he will be missing from the lineup on Saturday in a critical game against the Giants, he will be a topic of discussion across the country.

"It's so rare you have an athlete like Shawn Green making a decision like this," said Lapchick, who admits to being a Dodgers fan. "If they fall too far, they could be out of the wild-card race -- that's a lot of sports pressure, the same pressure Sandy Koufax felt.

"You can be sure he spent a lot of time thinking about this. As much as I want the Dodgers to win, I was hoping he'd take a religious stance."

Greg Garber is a senior writer for ESPN.com