NEW YORK -- For the fifth straight year, it was a victory
Takeru Kobayashi could truly relish. 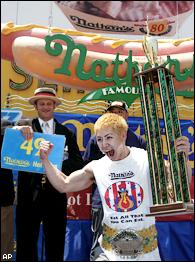 The win means the coveted Mustard Yellow Belt will return to
Japan for the ninth year out of the past 10. New Jersey's Steve
Keiner, who won in 1999, is the only American to capture the title
in the past decade.

The runner-up was Sonya Thomas of Alexandria, Va. -- known as The
Black Widow on the competitive-eating circuit -- who set an American
record by downing 37 hot dogs in the same 12 minutes.

Thomas, who manages a Burger King restaurant, separates the hot
dog from the bun and eats them separately. She dips the bun in
water to make it easier to swallow with less chewing.

"I want to be No. 1 in the world, so I practice," she told CNN
shortly after the contest. "I'm working on more speed."

She said she was planning a light dinner -- maybe a salad.

Thomas, who weighs a remarkable 105 pounds, is a rising
speed-eating star. Last December in Atlantic City, N.J., she
finished off 89 meatballs -- about six pounds' worth -- in 12
minutes. And in August, she captured a lobster-eating contest in
Maine by consuming 38 of the creatures in 12 minutes.

The hot dog contest takes place outside the original Nathan's in
Coney Island. The contest was first held there in 1916.