On the surface, the coming-out announcements of LPGA golfer Rosie Jones and WNBA superstar Sheryl Swoopes might seem like two separate events.

Each of their high-profile declarations of their gay lifestyle has been accompanied by the news that they are now endorsers of a lesbian travel service called Olivia.

Oh, how things have changed.

Just ask Martina Navratilova, who 25 years ago was not afraid to say that she was gay. Over time, she lost millions of dollars because of her sexual orientation.

"I was always told to lie low so I wouldn't throw off potential sponsors -- not pretend to be someone else but just keep quiet," Navratilova told The Advocate, a national gay magazine in Sept. 1993.

Navratilova had her sponsors like Avia shoes, Yonex rackets and Thorlo socks, but she wasn't getting the beverage and clothing deals that a player of her caliber deserved.

Today, Navratilova is the perfect endorser for Olivia, which signed her in March.

When Jones and Swoopes booked cruises and keen company executives noticed their names, an alliance between the two became the natural thing to do. Swoopes will be on board a cruise that leaves from San Diego this Saturday and will feature Navratilova and the Indigo Girls.

"It's funny, when I booked the cruise I didn't even think about people seeing my name on this list full of lesbians," Swoopes told ESPN The Magazine. "I guess I didn't care. I just felt like, if I'm going to do the cruise and I'm going to be the face of Olivia, why not just come all out?"

Amy Errett, Olivia's chief executive, said that there is nothing in the six-figure deals signed by Jones and Swoopes that required them to tie their announcement to their deal with the gay brand. 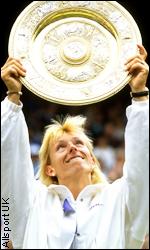 "It has never been about getting our name in the initial announcement," Errett said. "But it's a logical step. We think they deserve to have a company sign them who really believes in them."

Although Jones and Swoopes had to be openly gay to accept the deal, Errett says the 33-year-old company, which has 15 trips scheduled this year, isn't aggressively pursuing athletes who are rumored to be gay.

"We're not going to try to convince someone to come out because we want to give them an endorsement deal," Errett said.

Being an openly gay athlete 25 years ago might have been hindered appeal in business world, but times have changed. Those who identify themselves as gay annually spend $450 billion, according to Scarbrough Research, a marketplace tracking firm. Their research reveals that 27 percent of gay households have an average income exceeding $100,000 and 81 percent are more likely to purchase products that are perceived as gay-friendly.

"I would hope that Sheryl's marketability will remain intact," said sports agent Lon Babby. "Sheryl is one of the WNBA's top players and is an incredible ambassador for the league and for women's sports. I think the younger generation -- the highly coveted demographic -- is much more understanding and accepting of diversity and corporate America recognizes this."