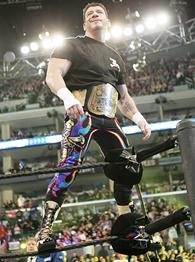 Eddie Guerrero, 38, had struggled with drug abuse for years before he was found dead last month in a Minneapolis hotel shortly before a show.

The medical examiner has yet to rule on the cause of death, but Guerrero's widow has said she was told an autopsy showed signs of heart disease, which she blamed on his past alcohol and drug abuse combined with an aggressive workout regimen.

"This is the first time a superstar of this magnitude has passed away on a national promotion," Dave Meltzer, editor of Wrestling Observer, said. "I'm sure they are going to have to do a lot of thinking."

WWE, whose wrestling programming is among the highest-rated on cable television, said it will announce details of the new testing procedure in the coming weeks. Chairman Vince McMahon told wrestlers last week that the new policy would involve frequent, random tests conducted by an independent agency.

"The policy is going to be very fair. No special consideration for any one," McMahon said.

The issue isn't new to McMahon or pro wrestling.

In 1994, McMahon was acquitted of charges alleging he pressured his athletes to bulk up on steroids. Jesse Ventura, a flamboyant pro wrestler before he was elected governor of Minnesota, has admitted using steroids. Another pro wrestler, Curt "Mr. Perfect" Hennig, died in 2003 of a cocaine overdose. When Brian Pillman, a wrestler and former NFL player, died in 1997 of heart disease, empty bottles of prescription painkillers were found in his hotel room.

Bruno Sammartino, who held the World Wrestling Federation title for 11 years in the 1960s and '70s, refused to be inducted into a wrestling hall of fame this year because he believes today's wrestling is vulgar and bad for children. He said he was sickened to hear young wrestlers were hooked on drugs, pain killers and steroids.

"We believe that this new policy is appropriate and important to ensure the health and well-being of our talent," WWE spokesman Gary Davis said in explaining the change.

Previously, WWE tested for drugs only when it saw a need.

Davis also cited the current focus on drug and steroid use in sports; Major League Baseball recently strengthened its steroids policy under pressure from Congress.

Although wrestling is entertainment, some experts say a grueling number of matches, high acrobatics and expectations placed on wrestlers contributes to the use of steroids and painkillers.

The pressure to perform is even greater on smaller and older wrestlers, Meltzer said.

"You're expected to look a certain way," Meltzer said. "The public expectation for these guys is very difficult to live up to. To do it 200 times per year, it's very hard on the body what they do."