As if the players, coaches, equipment managers and anyone else paid by a team or school needed another signal that it's important to clean up everything after a game ...

A piece of gauze that wasn't used by Gonzaga's Adam Morrison is on eBay right now. And through 17 rounds of bidding, the price is up to $22.50.

Let's go through this again: This is not the piece Morrison used to stop a nosebleed during last Monday's game against Pepperdine. This is not the piece that was reportedly for sale and then pulled from the site after Gonzaga officials asked the seller to take it down. You know, so as not to compromise Morrison's eligibility.

This is, supposedly, a piece of gauze that never even touched the face of college basketball's leading scorer.

Years ago, it would have been a useless piece of memorabilia. Today, the auctioneer notes that only "serious bidders" should think about typing in bids for "unused" gauze. 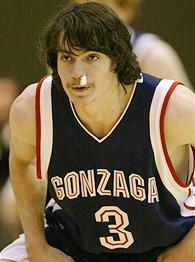 It's hard to know exactly when fetish memorabilia like this went mainstream, but it has been on the fringe for a long time. New York Yankees fan Richard Tschernia owns Thurman Munson's pilot license. New Orleans Saints fan Jay Foster lost his home in Ocean Springs, Miss., as a result of Hurricane Katrina, but he was happy to report that the cell phone used by Joe Horn in that infamous touchdown celebration was spared. And there were willing buyers both for Luis Gonzalez's used chewing gum ($10,000) and for bone chips from Jeff Nelson's shoulder surgery ($2,000).

I've followed all of this stuff, so I'm not surprised about the unused gauze.

When Pittsburgh Steelers quarterback Ben Roethlisberger went on the "Late Show with David Letterman" to shave his beard the day after his Super Bowl win, I advised his marketing agent, Ryan Tollner, to bring a plastic bag so he could save the whiskers.

Tollner thought it was sick ... at first. But after I convinced him that someone might want to buy the quarterback's facial hair, he conveyed the message to his client. Roethlisberger, in the end, nixed the idea.

Sure enough, six days after the show, I received this e-mail: "Hello Darren, I read your article about Ben Roethlisberger shaving his beard on 'David Letterman.' I have a client that will pay $15,000 for the shavings. I know this sounds crazy, but I assure you this is a legitimate offer ... let me know if you have any connections here. Thanks and I look forward to hearing from you."

Folks, even garbage has value these days.

In December, interior decorator Matthias Blume was cleaning up after the World Cup's televised draw in Leipzig when he pulled from the garbage the name tags of all 32 countries in the competition. Blume already claims to have sold "Germany" for thousands of dollars.

The mania for collectibles has created great potential for items to be auctioned as authentic that aren't, in fact, the real thing.

Days after the "Malice at the Palace," somebody put a Gatorade cup up on eBay, claiming it was the cup that came out of the stands and landed on Indiana Pacers forward Ron Artest. But when I pointed out to the seller that video evidence suggested the real cup was squarely in the hands of an announcer on press row, the auction was pulled.

For every fake, though, there are -- very sadly -- plenty of weird-but-real items to buy.

Daulton is selling his goods as part of his divorce proceedings. But if players such as Morrison and schools such as Gonzaga are interested in stopping the unauthorized collection of throwaway materials now somehow deemed valuable, then they must join in with what others have started.

The Diamondbacks' Gonzalez, whose mouth produced one of the most expensive used items ever -- chewing gum -- now cuts his underwear, socks and sliding shorts into pieces before he puts them in the trash can. And Roger Clemens has been known to cut his number out of any used equipment.

Many players probably don't care. But maybe they will when they hear that, one day in the future, their blood, hair or saliva on a piece of gauze, a barbershop floor or a partially-drunk sports drink could be used by some freakish fan in an attempt to clone them.