It has been almost 60 years since the New York Knicks selected the University of Utah's Wat Misaka in the first round of the 1947 draft, making him the NBA's first player of Asian descent. My dad was the Knicks' coach back then, and liked what he'd seen of the Japanese-American, a 5-foot-7 guard, at Utah. There was no big reaction to Misaka's signing, nor was there much reaction when he was let go only three games into the Knicks' season. He had scored seven points.

Three years later, in 1950, my dad signed Nat "Sweetwater" Clifton to be one of the first African-Americans in the NBA. When that happened, I looked out my bedroom window to see people picketing and my Dad's image swinging from a tree. I heard my dad being called a "n----- lover."

Very few noticed that Misaka was a Japanese-American in the NBA. But many seemed to care -- enough to spread hate -- when Clifton and other African-Americans joined the league.

Race and racism are anything but rational.

Until relatively recently, athletes of Asian descent were hardly heard from in sport in this country, even as Asian populations began to grow dramatically in the United States. Stereotypes began to spread about Asians being uninterested in encouraging their children to play sports. They weren't considered to be athletic enough but instead were viewed as being superintelligent.

That, of course, was the opposite of the stereotype of African-American children. Were we creating self-fulfilling expectations?

Recently, the LPGA's Ginn Open was held near Orlando, and Korean women dominated play. In fact, 26 of the 141 exempt players in the LPGA are Korean, and eight others come from Japan, Malaysia, Thailand, Taiwan and the Philippines. As their numbers grow (11 of the 21 rookies in 2006 are Asian), so does their domination. Four of the top 10 tour money winners are Korean; eight of the top 15 are Asian.

The LPGA has had to address a number of cultural issues presented by this development, especially since golf's appeal depends more heavily on contact between fans and players than that of many other sports. In some cases, there is a language barrier. In others, a broad cultural difference exists that can result in the Asian stars seeming distant and perhaps not fan friendly.

At the SK Telecom tournament, crowds flocked to Wie, and one young female fan shouted out "on-ni [big sister] fighting!" as she strode by. While she was in Korea, Wie signed a $3 million advertisement deal with ShinYoung, a South Korean real estate developer.

Super Bowl MVP Hines Ward has a Korean mother and was born in Korea. When Ward made a highly publicized visit to his birth country this offseason, he was widely embraced as an inspiration for the Korean people. As the NFL considers how best to market itself in Asia, Ward might well serve the role for his league that Yao Ming does for the NBA's marketing efforts. Last season, NFL rosters included four players of Asian descent: the Steelers' Ward, the Titans' Eugene Amano (the Philippines), the Giants' Will Demps (who is half-Korean) and the Cowboys' Dat Nguyen (Vietnam). The NBA has had five Asian players on its rosters in recent seasons: Yao, Wang Zhizhi and Mengke Bateer, who are Chinese; Ha Seung-Jin from Korea; and Yuta Tabuse from Japan. The NBA has recognized a marketing star in Yao.

The Yao phenomenon is remarkable. The NBA will be in China for the second time this summer, and NBA merchandise seems to fly off the shelves there. About 120 NBA games (including 30 featuring Yao's Rockets) are broadcast in China, and Asian fans in the U.S. turn out when Houston comes to town. The Rockets advertise in Mandarin on billboards in the Houston area and distribute statistics in both English and Mandarin at their games.

The NFL has to have been watching all that happen. It's a safe guess that pro football has Ward's Asian descent on its radar screen. 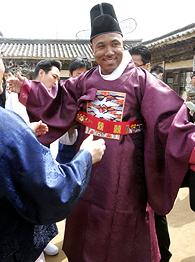 Major League Baseball has been ahead of the NBA and NFL for years, as the popularity of America's pastime has soared in several Asian countries, especially Japan. There were a record 26 players of Asian descent on 2005 MLB rosters. Fourteen were of Japanese descent, five were from Korea, three were from Taiwan, two were of Vietnamese descent and one was half-Thai. Seattle's Ichiro Suzuki and the Yankees' Hideki Matsui, both natives of Japan, play the game on the all-star level.

The tennis world, too, has found a wealth of talent in Asia. On the WTA Tour, six Chinese players are ranked in the top 100, and only five nations claim more than that. Several weeks ago at the Estoril Open in Portugal, Zheng Jie and Li Na met for the championship, the first time the WTA has seen an all-Chinese final. Li Ting and Sun Tiantian, also Chinese, won the doubles title at that tournament, as well.

Here in the U.S., according to the 2000 census, families of Asian descent have the nation's largest average income among all ethnic groups, as well as the highest graduation rates at the high school and college levels. Moreover, they are the nation's fastest growing ethnic group, with large population centers in major cities that are home to multiple pro sports franchises. When it comes to putting fans in the stands and merchandise in their homes and offices, Asian-Americans should be a sports marketer's dream.

The presence of these players is helping, slowly, to break the stereotypes, but obstacles remain. Yun-Oh Whang, a marketing professor at Kansas State University, wrote in the Harvard Asia Pacific Review that, "the presence of Asian and Asian American athletes in major professional sports has a symbolic significance in fighting the stereotypes imposed on (people of) Asian descent. One of the common stereotypes is that Asians are smart, but not athletic. Asians are often considered to be too small and too slow to compete at the highest level of sports." He pointed to the example of quarterback Timmy Chang of the University of Hawaii, who wasn't chosen in last month's NFL Draft despite setting an NCAA record for career passing yardage.

SI.com reported recently that, according to Chang's agent, Don Yee, who is also an Asian-American, a scout said at the NFL combine that Chang is too short to play quarterback in the NFL. Chang is 6-foot-1, which makes him as tall as or taller than several current NFL quarterbacks. When these comparisons were noted, the scout reportedly answered, "But he plays short."

That sounds similar to the kind of excuses that kept African-Americans from playing quarterback for decades.

The stereotypes seem to apply to Asian-American coaches, too, at least in the case of Norm Chow, who has had a spectacular record wherever he has coached. Before he joined the Tennessee Titans as the offensive coordinator, Chow was part of the recent success at the University of Southern California on Pete Carroll's staff; and before that, he worked his magic with the long string of NFL-caliber quarterbacks at Brigham Young for 27 years. But he has never had a head coaching job in college or the pros. Rumors had him as a surefire pick to land a head coaching job in college after USC won a national championship a couple of seasons ago. When no offers materialized, he left USC for the Titans.

He left Brigham Young after the 1999 season in the wake of a racist jab from a new BYU vice president.

Chow told David Leonard at Popmatters.com, "I'm sitting here, this guy's standing three feet away from me talking about this, that and the other. And he says, 'We're going to build this new facility, and we got all the Chinamen lined up, ready to go.'" Chow reported it to his athletic director. The AD went to the vice president, who defended his actions by saying, "I didn't know Norm was Chinese."

Coaching staffs, as well as front offices, are an untapped marketing area for teams and leagues in position to appeal to the Asian community. Fans identify with those roles, as well as with players, and growth in the numbers of people of Asian descent in those jobs would present a major promotional opportunity for American sports. Other than Charles B. Wang, who is from China and is the majority owner of the New York Islanders, there are no people of Asian descent who are head coaches, team presidents or general managers in the major pro sports in the United States.

So there is promise, but not yet prominence, for people of Asian descent in American sport. Diversity has been shown to be a business imperative, and the marketplace for American sport in Asia and for athletes of Asian descent on American teams is a rich one. My hope is that the sports world will have moved the promise closer to prominence by the time we celebrate Asian Pacific American Heritage Month in 2007.

Richard E. Lapchick is chairman of the DeVos Sport Business Management Graduate Program in the College of Business Administration at the University of Central Florida. The author of 12 books, Lapchick also directs UCF's Institute for Diversity and Ethics in Sport, is the author of the annual Racial and Gender Report Card, and is the Director of the National Consortium for Academics and Sport. He is a regular commentator on issues of diversity in sport for ESPN.com.