Chestnut, a 22-year-old civil engineering student at San Jose State, ate 50 hot dogs and buns in 12 minutes Thursday at the Las Vegas qualifier for a spot at the table at the Nathan's Famous Hot Dog Eating Contest. 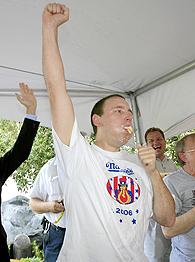 The mark sets the American hot dog eating record, beating the 42 hot dogs and buns swallowed by Sonya Thomas last year. In the same competition, Chestnut had only eaten 32.

Kobayashi, who flies to Coney Island each year from Japan for the hot dog eating championship held July 4, holds the world record of 53½ hot dogs and buns. He has won the last five contests, but in two of those victories he ate less than 50 hot dogs and buns.

"This could be so critical to our sport," said George Shea, chair of the International Federation of Competitive Eating, which sanctions more than 100 eating contests, including the Nathan's event. "It's never good for the same athlete to win so many years in a row. The Fourth of July has been stolen from Americans because of Kobayashi's dominance and now America has someone who they can get excited about."

"I'm going to push harder on our Independence Day to take the title back," said Chestnut, who is 6-foot-1 and 230 pounds. "My brother is in the National Guard in Iraq and there will be a lot of people behind me."

Chestnut estimates he has won $50,000 in cash and prizes in a year on the circuit, including a car and ring after prevailing in the Wing Bowl. In the event, which took place in Philadelphia, he ate 173 buffalo wings in 30 minutes.

Darren Rovell, a senior writer for ESPN.com, can be reached at Darren.rovell@espn3.com.