WASHINGTON -- For the first time in seven years, a girl has
the honor of being called America's best speller. 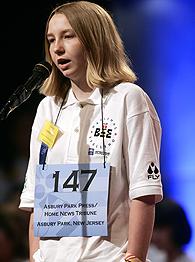 The eighth-grader at the H.W. Mountz School in Spring Lake is
the first female winner since 1999. After hearing the familiar word
during Thursday's final on prime-time television, she knew she
would win.

"I couldn't believe it. I knew I knew how to spell the word and
I was just in shock," said Katharine, who stepped back from the
microphone and put her hands to her mouth after the judges declared
her the winner following 20 rounds of spelling. "I couldn't
believe I would win."

Asked what she'll remember most, she said: "Probably just
hearing 'ursprache"' -- which means a parent language.

Katharine, who tied for seventh-place last year, goes home with
more than $42,000 in cash and prizes, including an engraved trophy
cup.

Runner-up was Finola Mei Hwa Hackett, a 14-year-old Canadian, a
confident speller during two days of competition who nonetheless
stumbled on "weltschmerz." The word means a type of mental
depression.

Third-place went to Saryn Hooks, a 14-year-old from West
Alexander Middle School in Taylorsville, N.C., who was disqualified
earlier in the evening, then returned to competition after the
judges corrected their mistake. Saryn fumbled on "icteritious,"
which means of a jaundiced color.

Katharine, who always kept her hands in her pockets as she
spelled her words, said she wasn't trying to look cool -- she was
actually holding a good-luck pendant.

"It's an angel pendant," Katharine said, removing it from her
left pocket. "It was given to me by a family in my town and I
always put it in my pocket during spelling bees. I think it brings
good luck, for some reason."

Driven by the popularity of recent movies, books and a Broadway
musical on the seemingly improbable theme of spelling hard words,
the bee featured prime-time television coverage for the first time
in its 79-year history. ABC broadcast the final from 8 p.m. until
the winner was crowned just after 10 p.m. EDT.

The prime-time broadcast made for an exceptionally long night
for the spellers. By comparison, last year's champion emerged just
after 4:30 p.m. EDT.

Spellers took to the stage minutes before the broadcast,
huddling and chanting "1-2-3, Spell" before taking their seats.
Their parents sat on stage, too, across the aisle.

The broadcast had the flavor and style of a sports program,
opening with a montage of the competitors and including a short
profile of the first speller before he got his word. Profiles of
other spellers followed during subsequent commercial breaks, and
each pause in the competition brought a groan from the audience.

Each word or grimace by spellers triggered a blast of camera
shutters, and the live TV camera followed the losers into the arms
of comforting parents.

Even gamblers got into the act, putting money down on questions
including whether the final word would have an "e" in it and
whether the winner would wear glasses. Simon Noble, CEO of
PinnacleSports.com, said his offshore Internet sports betting
company had received about $70,000 in wagers on seven propositions
about the bee as of noon Thursday.

The pace of competition, held in the basement ballroom of a
Washington hotel, was slowed by the need to accommodate commercial
breaks in the TV coverage provided by ABC, as well as earlier by
ESPN.

"We're out for another two-minute commercial break," or
"We're out for about a minute and a half," bee director Paige
Kimble announced frequently, connected by headset to the network
directors. The announcements drew frequent groans from an audience
interested in faster action.

The bee began Wednesday with 274 fourth- through eighth-graders.

The spellers sat below hot lights on the red-and-blue,
made-for-TV stage. On Thursday, all wore matching white,
short-sleeve polo shirts with the bee logo on the left chest.

Spellers made it to the finals by winning contests in the 50
states, as well as in American Samoa, the Bahamas, Canada, Europe,
Guam, Jamaica, New Zealand, Puerto Rico and the U.S. Virgin
Islands.

ESPN has broadcast the second day of the bee since 1994. This
year, in a nod to the popularity of "reality TV," the
championship rounds were moved to ABC for a live, prime-time event
before a larger viewing audience. The Walt Disney Co. owns both
networks.

All the attention follows a series of bee-centered developments
in the popular culture.

"Akeelah and the Bee," a movie about a Los Angeles girl who
overcomes adversity to win the national spelling bee, opened
nationwide in late April.

That followed last year's "Bee Season," about a man focused on
his daughter's quest to become a spelling bee champ. It was based
on the best-selling novel by Myla Goldberg.

The Louisville Courier-Journal started the bee in 1925. The E.W.
Scripps Co., a media conglomerate, assumed sponsorship in 1941.