BALCO founder Victor Conte allegedly bragged to an associate that Barry Bonds had intimate knowledge of the designer steroids he received from the Bay Area company, and that the Giants slugger took an active interest in what those substances contained, a source close to Conte told ESPN The Magazine. 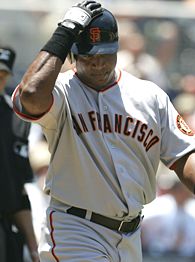 The disclosure comes to light amid reports that Patrick Arnold, the Illinois chemist who created the designer steroid THG, has given a wide-ranging interview about his role in the BALCO affair to Sports Illustrated. In an e-mail to ESPN on Saturday afternoon, Arnold labeled as erroneous reports that he will talk about Bonds' steroid knowledge.

Arnold, 39, pleaded guilty to conspiracy to distribute anabolic steroids in April. He is scheduled to report to federal prison next week to begin serving a four-month sentence for his part in the BALCO steroid conspiracy.

If true, the disclosure appears to contradict Bonds' sworn testimony before a grand jury in 2004. In a report on that testimony, the San Francisco Chrionicle quoted Bonds as saying that he did not think that a clear liquid he received from his trainer, Greg Anderson, was a designer steroid. Bonds reportedly said that he did not think that Anderson "would jeopardize our friendship" by giving him banned drugs.

However, a source who is close to Conte told ESPN The Magazine that the BALCO founder confided to him that Bonds knew precisely what he was taking. The source said that Conte told him that Bonds came to BALCO to "get jacked."

"It was recently reported that I've made statements to the effect that Barry Bonds had knowledge that he was taking performance enhancing substances," Conte said in a statement Saturday. "I've stated publicly on several occasions that I did not provide anabolic steroids to Barry. That is the truth, and I stand by those statements. The motive of the unidentified source of this misinformation needs to be questioned.

"I've never said that Barry came to BALCO to 'get jacked.' These allegations have been fabricated by someone for whatever reason and are totally ridiculous."

The disclosure adds a wrinkle to the case that has hung over Bonds since federal agents raided BALCO in 2003. According to the Chronicle, Jason Giambi testified to the grand jury that Anderson spoke in great detail about the drugs he was being given. According to the source, Conte was at least as forthcoming with Bonds.

Conte has repeatedly said he had no dealings with BALCO's baseball clients.

Shaun Assael is a senior writer for ESPN The Magazine.