The next time someone puts a bug in your ear about a high school football star worth watching, tell him about Jake Asp. The senior from Somerset High School in Wisconsin actually had a bug in his ear, and it almost cost him part of his season.

Asp, a 6-foot-1, 205-pound fullback, set a Middle Border Conference record on Sept. 15 by rushing for 362 yards. He carried 33 times and scored five touchdowns in a 40-14 win against New Richmond. The local paper, the New Richmond News, called him "unstoppable." 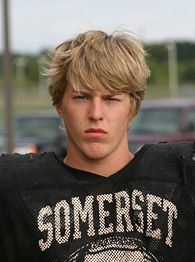 A day after the game, Asp went to his room to take a nap but woke up because he felt something strange and painful in his right ear. When the pain became unbearable, family members took him to a nearby clinic. They speculated that something had happened to him in the game the night before.

Asp could hear it, and it nearly drove him nuts.

"It was digging and biting into my eardrum," he said. "That went on for, like, 15 minutes. I could hear it -- a whole bunch of loud popping noises. It hurt pretty bad."

The medical staff couldn't pull it out with tweezers at the clinic. The pain grew worse as Asp's ear became filled with blood. He was taken to United Hospital in nearby Minneapolis/St. Paul, where he was sedated and underwent minor surgery to remove the insect.

Asp says he has no idea how the insect, a beetle, got into his ear. He thinks he left a window open in his bedroom.

Of course, doctors packaged it up so he could take it home. He took it to school Monday to show friends. They're calling him "Beetle Juice" around school. He says he's been asked to tell the story "a million times."

Somerset coach Bruce Larson called it the most bizarre story he's heard about an injury to one of his players. He's glad Asp didn't miss practice or a game. He could have, though, if the insect had damaged Asp's eardrum or disrupted his equilibrium.

Asp returned to practice last week and, in Somerset's game Friday, rushed for 89 yards on 20 carries.

He'll close his windows now when he takes a nap. He doesn't want to go through that pain again.

"I tore a ligament in my knee last year in the last game of the season," he said. "The beetle was worse."

Jena Janovy is an editor at ESPN.com. She can be reached at jenifer.janovy@espn3.com.