Democrat Heath Shuler won his campaign for Congress on Tuesday in North Carolina's 11th Congressional District, ousting Republican Rep. Charles Taylor. Shuler, a former University of Tennessee star quarterback who was a Heisman Trophy runner-up, was a bust in the NFL. His candidacy prompted good-natured jabs from the likes of Redskins fans who wanted no part of his return to Washington, D.C.

Shuler, 34, grew up in western North Carolina, and has said his political views were shaped by what he calls "mountain values." He opposes abortion rights, supports gun rights and believes the Bush Administration has gone astray on Iraq.

In an exclusive interview with ESPN.com on Wednesday morning, Shuler discussed his priorities as a member of Congress and talked a little football, too.

ESPN.com: Why do you think you won so convincingly against an eight-term incumbent? 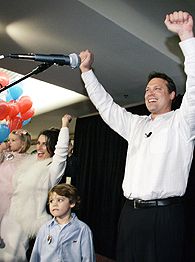 Shuler: People in my district decided it was time for a change.

ESPN.com: What will be your highest priority when you get to Washington?

ESPN.com: You've been a rookie on several levels. What will be the biggest challenge being a rookie in congress?

Shuler: Part of it will be making sure I put together a great staff and have the right people around me.

ESPN.com: You were a hero in high school and college, but you had a tough run in the NFL. Is this redemption for Heath Shuler?

Shuler: Yeah, it was unfortunate I had an injury that ended my career. I wish I would have played better than I did. But this didn't have anything to do with what happened to me in the NFL.

ESPN.com: Now that you're in congress, what are your long-term political ambitions? The U.S. Senate? Governor?

Shuler: We'll have to take it one campaign at a time.

Shuler: It's a pleasure to meet you.

ESPN.com: What must the Redskins do to make the playoffs this season? 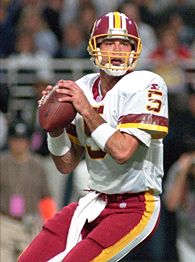 ESPN.com: What will you do if people in Washington boo you when they see you on the street?

Shuler: I'll pretend I'm in a stadium and security guards took a beach ball away from the fans.

ESPN.com: What will you do if the first bill you try to pass is intercepted?

Shuler: That won't happen. The Democrats have control of the House.

ESPN.com: Your opponent called you a carpetbagger. When did you get into the carpet business and was it hard work?

Shuler: It's unfortunate that after spending 18 years of my life in North Carolina I went away to get a college education and they criticized me for that.

ESPN.com: If Redskins owner Daniel Snyder invited you to the owner's box for a game, would you accept?

Shuler: Absolutely. I'm a big Redskins fan and a huge Joe Gibbs fan. I have a Gibbs Performance Racing hat in my truck.

ESPN.com: What member of Congress will you most look forward to having lunch with?

Shuler: Don't know that one yet.

ESPN.com: Who do you predict will play in the BCS championship game?

ESPN.com: How does Congressman Shuler sound?

Shuler: It sounds better every minute.

George J. Tanber is a contributor to ESPN.com. He can be reached at george.tanber@iscg.com.