The parents of former NFL player Pat Tillman say a memo from a top general passed up the military ranks within a week after Tillman's April 2004 death supports the family's long-held belief that the Bush administration knew more than it has publicly acknowledged about the incident. The memo, obtained Friday by The Associated Press, warned that Tillman might have died from friendly fire, and was intended to reach all the way to President Bush.

According to the AP, the memo was sent by then-Maj. Gen. Stanley McChrystal and indicated that it was "highly possible" the Army Ranger was killed by friendly fire. It was addressed to four-star Gen. John Abizaid, head of Central Command; in it, McChrystal expressed concern that Bush and then-acting Army Secretary Lee Brownlee might give speeches in which they misstated the facts about Tillman's death.

Tillman family members have been frustrated by the results of four investigations into the circumstances of the April 22, 2004, firefight in the mountains of Afghanistan that claimed Tillman's life. They have strongly suggested that the Army tried to glorify its most prominent recruit as a war hero -- honoring him with the Silver Star and portraying him as dying at the hands of the enemy -- when it knew all along he'd been gunned down by fellow soldiers. The family wasn't informed of the friendly fire until more than a month after Tillman died.

The individual who they believe ultimately signed off on that public version of the story is former Secretary of Defense Donald Rumsfeld. 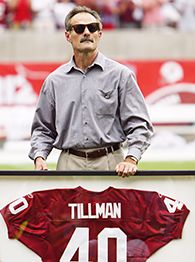 "It seems to me that if somebody is communicating with Bush, [then] Bush knows about it," Patrick K. Tillman, the player's father, told ESPN.com on Friday. "And they are not going to go around Rumsfeld on a war issue. That means that Rumsfeld knew no later than the 29th [of April].

"They just got through briefing us, and nobody knew anything. I hammered on the issue. And they said Rumsfeld didn't know until the latter part of May, sometime after May 15. It is a big deal. And that might explain how all these errors occurred."

Tillman's mother, Mary, told the AP on Saturday the newly disclosed
document demonstrates Bush was complicit in deceiving her family.

"He knew it was friendly fire in the very beginning, and he
never intervened to help, and he essentially has covered up a crime
in order to promote the war," Mary Tillman said in a telephone
interview. "All of this was done for PR purposes."

According to the memo from McChrystal disclosed on Friday, McChrystal wanted "receiving commanders to warn the Acting Secretary of the Army and the President of the United States about comments they might make in speeches to preclude embarrassment if the public found out friendly fire was involved."

A White House spokesperson said Friday there was no indication from a review of records that the president had received McChrystal's warning.

In the wake of Tillman's death, a series of investigations has found that soldiers failed to follow regulations and destroyed evidence such as Tillman's clothing and equipment. McChrystal is among nine officers, including four generals, that the Department of Defense Inspector General's Office has recommended be held accountable by the Army for missteps in the wake of the firefight.

Investigators from the Inspector General's office first revealed the messages from McChrystal warning of the possibility of friendly fire in a briefing last Monday. The IG's report didn't mention Abizaid as among those who should be held accountable. According to the report, Abizaid was in Iraq at the time of Tillman's death, and investigators confirmed that there was a delay of between 10 to 20 days before Abizaid received the message from McChrystal.

Rumsfeld declined an interview request this week from ESPN.com.

"It sounds to me like what we have been not wanting to guess at is true," said Tillman's father, a San Jose, Calif., attorney. "Everyone has been asking us, 'Well, what do you think happened?' It is something inappropriate to speculate on, because it is too nasty."

As in their responses to three previous Army investigations, Tillman family members have indicated they didn't get the answers they've been seeking in the four-hour briefing they received last Monday in San Jose. Tillman's father said it was a frustrating experience.

"They were trying to saturate us with garbage," he said Friday night.

The latest report failed to identify the shooter who pulled the trigger on the gun that killed Tillman. According to Patrick Tillman Sr., "They said it is not important. On top of that, they misidentified even the caliber of bullet that killed him."

The family, Tillman's father said, has also been frustrated in its attempts to gain access to a report written by Capt. Richard Scott in the days immediately following the firefight. That report, the family says, raised the possibility that those who fired on Tillman might have been criminally negligent and also recommended the Army's criminal unit be brought in to investigate. Last Monday's report found nothing criminal in the actions of the soldiers on the ground during the firefight.

"They said it [Scott's investigation] is not a report," Tillman explained. "Not only is it not a report, they don't have it. And what they do have, they wouldn't tell me."

Mike Fish is an investigative reporter for ESPN.com. He can be reached at michaeljfish@gmail.com. The Associated Press contributed to this report.