WASHINGTON -- The winner of the spelling bee sounded as if
he'd rather be at a math Olympiad.

Thirteen-year-old Evan O'Dorney of Danville, Calif., breezed
through the Scripps National Spelling Bee with barely a hitch
Thursday night, taking the title, the trophy and the prizes in a
competition that he confessed really wasn't his favorite.

The home-schooled eighth-grader easily aced "serrefine" -- a
noun describing small forceps -- to become the last youngster
standing at the 80th annual bee. He triumphed after a tense duel
with Nate Gartke of Spruce Grove, Alberta, who was trying to become
the first Canadian to win.

Afterward, Evan spoke more enthusiastically about attending a
math camp in Nebraska this summer than about becoming the English
language's top speller.

"My favorite things to do were math and music, and with the
math I really like the way the numbers fit together," he said.
"And with the music I like to let out ideas by composing notes --
and the spelling is just a bunch of memorization."

Evan's victory came even though he wasn't able to stick to one
of his superstitions. In previous bees, he has always eaten fish
before competition, but he revealed he didn't do that this time
because it wasn't on the menu of the Spelling Bee dinner. 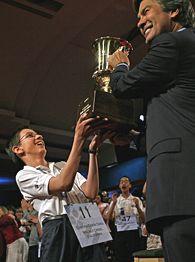 Asked whether he liked the bee more now that he's won it, Evan
said: "Are you saying I'm supposed to like it more? Yeah, I do a
little bit."

Evan's father, Michael, is a subway train operator in the San
Francisco area. His mother, Jennifer, is in charge of Evan's
schooling.

"He memorizes well, he analyzes well and he guesses well,"
Michael O'Dorney said.

Evan and Nate went head-to-head for three rounds, matching each
other's correct spellings until Nate flubbed the medical word
"coryza" by adding the letter "h." Until then, Nate had been
quite the showman, waving celebrity-like to the audience after each
word and basking in the cheers from a row that waved red-and-white
maple leaf flags.

Evan, meanwhile, was virtually unflappable. The kid who juggles
at home while his mother calls out words appeared to be in trouble
only once during the finals -- when he had to restart
"schuhplattler," a German-based word describing a dance. At one
point, Evan calmly cleaned his glasses while Nate spelled a word.

The day began with 59 spellers remaining from the record 286 who
started the competition Wednesday. The field was narrowed to 15
finalists, but eight were gone after the initial round, and two
more faltered in the next round, leaving a fivesome of Evan; Nate;
14-year-old Joseph Henares, of Avon, Conn.; 13-year-old Prateek
Kohli of Westbury, N.Y.; and 14-year-old Isabel Jacobson of
Madison, Wis.

Joseph faltered on "aniseikonia" (a visual defect), while
Prateek missed "oberek" (a Polish folk dance) and Isabel was out
on "cyanophycean" (a kind of algae).

Several of the top favorites were eliminated early in the
finals, including last year's sixth-place finisher, Jonathan
Horton, 14, of Gilbert, Ariz., who stumbled on "girolle" (a kind
of mushroom). Tia Thomas, 12, of Coarsegold, Calif., competing for
the fourth time, misspelled "zacate" (a grassy plant) and had to
settle for a big hug from her father and a seat on his lap as the
competition continued.

Evan seemed to take his victory in stride, a sharp contrast from
the stunning moment in the Grand Hyatt ballroom hours earlier when
perennial favorite Samir Patel was eliminated in his fifth and
final bee -- participants must be younger than 16 and can't be past
the eighth grade.

Samir, who last week likened the prospect of not winning to
"Dan Marino not winning the Super Bowl," had the audience gasping
in disbelief when he misspelled "clevis."

The 13-year-old Texan spelled out the word for a type of
fastening device as "c-l-e-v-i-c-e." After placing third, 27th,
second and 14th in his previous bees, he ended his bee career with
a tie for 34th. Like Hall of Fame quarterback Marino, Samir will go
down as one of the greatest at his craft never to win the big
prize.

Samir wiped away tears as he talked about his gaffe.

"The first thing I thought was c-l-e-v-i-s, and if I had been
slow and cautious like I always am, I would have got it right," he
said. "But I just outsmarted myself. It was an easy word. I just
made a stupid mistake."

Samir's mother, Jyoti, appealed his dismissal, based on subtle
differences in the way the word's final syllable could be
pronounced. Officials interrupted the following round to replay
pronouncer Jacques Bailly's exchange with Samir, and later
announced that the appeal had been denied.

"In the end, I think I said it right," Bailly said. "I really
wanted him to get it right, and I'm really sorry that he or his
family have some questions about it."