Chestnut, the great red, white and blue hope in the annual
Fourth of July competition, broke his own world record by inhaling
66 hot dogs in 12 minutes -- a staggering one every 10.9 seconds
before a screaming crowd in Coney Island.


"If I needed to eat another one right now, I could," the
23-year-old Californian said after receiving the mustard yellow
belt emblematic of hot dog eating supremacy.


Kobayashi, the Japanese eating machine, recently had a wisdom
tooth extracted and received chiropractic treatment due to a sore
jaw. But the winner of every Nathan's hot dog competition from 2001
to 2006 showed no ill effects as he stayed with Chestnut
frank-for-frank until the very end of the 12-minute competition.


Once the contest ended, the runner-up suffered a reversal --
competitive eating-speak for barfing -- leading to a deduction from
his final total. Kobayashi finished with 63 HDBs (hot dogs and buns
eaten) in his best performance ever.


Competitors receive credit for anything in their mouths at the
12-minute mark, provided they can swallow it.


"Obviously, the last bit exited his mouth quite dramatically,"
said Rich Shea of the International Federation of Competitive
Eating. Kobayashi's gastric distress was the only sour note in the
tube-steak tussle, which aired nationally on ESPN. 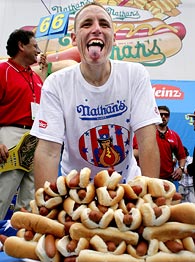 Kobayashi's previous best was 53½ in the competition that dates
back to 1916. The all-time record before Wednesday's remarkable
contest was Chestnut's 59½, set just last month in the Phoenix
suburb of Tempe.


The two gastric gladiators quickly distanced themselves from the
rest of the 17 competitors, processing more beef than a
slaughterhouse within the first few minutes. The two had each
downed 60 hot dogs with 60 seconds to go when Chestnut -- the veins
on his forehead extended -- put away the final franks to end
Kobayashi's reign.


Kobayashi, through a translator, promised to return for the 2008
event.


The victory by the San Jose, Calif., resident ended Japan's long
dominance of the contest. The only previous non-Japanese winner
since 1996 was New Jersey's Steve Keiner in 1999. Third place this
year went to another American, Patrick Bertoletti of Chicago, with
49.


"This title's been held by Kobayashi for six years, so it's
about time it came home," said Chestnut, holding an American flag
in his arms. "I knew going into this contest that Kobayashi was
going to give 100 percent."