EDITOR'S NOTE: This story was originally published on Aug. 29, 2007. On Sunday, Sept. 6, "Outside the Lines" (9 a.m. ET, ESPN) further examines allegations of point-shaving at the University of Toledo, including an exclusive interview with former Rockets running back Scooter McDougle, who is currently under indictment. See a preview here.

Growing up on the east side of Cleveland, Harvey "Scooter" McDougle Jr. dreamed of busting tackles for the hometown Browns. Even now, as his University of Toledo teammates are just days away from kicking off their 2007 season, he still has visions of cashing an NFL paycheck someday. But as what would be McDougle's senior season fast approaches, the chance that he has a future as a professional running back appears remote.

McDougle has become the public face of a football and men's basketball point-shaving investigation that strikes at the integrity of college sports -- and threatens to generate federal charges. Sources close to a Detroit-based FBI probe into gambling suggest prosecutors aim to present the case before a federal grand jury later this year. And though the players apparently aren't the primary targets of the FBI investigation, a number of former and possibly some current Toledo athletes could face indictment.

Away from the Toledo campus, behind closed doors an hour up the road in Detroit, federal authorities have squeezed McDougle, 22, for information. According to sources, McDougle is cooperating with investigators as they appear to be focusing on 50-year-old Ghazi Manni, the manager of a family-owned grocery in Detroit. For the time being, the U.S. Attorney's office has dropped the charges leveled in a criminal complaint against McDougle in late March, but a spokesperson for the office called it a procedural matter. Sources say the investigation remains ongoing.

There are no assurances that McDougle won't be indicted or required to testify against teammates about the alleged point-shaving or about the possibility that players shared inside information with gamblers.

One of the other names that has surfaced during the investigation, sources confirmed, is Bruce Gradkowski, the Rockets' starting quarterback in the 2003-05 seasons who now is a backup with the Tampa Bay Buccaneers. Authorities have not spoken about Gradkowski's possible connection, but sources say investigators are examining his playing time in a number of games under scrutiny as they follow up on an allegation that Manni had offered a Toledo player $10,000 to sit out particular games.

"I don't know what to say about that," said Gradkowski, coming off the field after a recent Bucs' training camp practice. A Tampa Bay public relations assistant, who had been made aware of the focus of the interview, walked beside Gradkowski and deflected follow-up questions.

ESPN.com has traced the case over the past five months, from its start at Toledo to a gambling ring in Michigan, to Caribbean offshore gambling sites, to Las Vegas sports books. In addition, documents obtained by ESPN.com reveal that in the course of their probe, federal authorities wiretapped the cell phone of a man they identified in the past as being involved with members of La Cosa Nostra, the Sicilian organized crime family that authorities say oversees the majority of illegal gambling in the Detroit area.

The Toledo inquiry shares some similarity in that regard with the recent federal investigation into betting on NBA games. According to reports, federal authorities learned that former NBA referee Tim Donaghy, who pleaded guilty to two felony charges on Aug. 15, was involved in that scheme during wiretaps of suspected organized crime associates. That investigation is being handled out of the U.S. Attorney's office in Brooklyn, N.Y.

According to federal documents in the Toledo case, FBI agents using electronic surveillance in December 2005 heard a conversation between McDougle and Manni. In it, McDougle said he would contact other football players about helping them make some money off a game against the University of Texas at El Paso.

Agents with the FBI's organized crime squad first interviewed McDougle in December 2006, about the time the last wiretap on Manni expired. In all likelihood, according to former federal law enforcement officials familiar with the case, investigators pressed forward in March with McDougle's arrest because he either had backed off information he'd previously provided in December or his cooperation was waning in some other way.

In an interview with ESPN.com, McDougle denied any knowledge that Manni might have been gambling on Toledo games.

"Obviously, sometimes people you know [are] doing things you never know nothing about," said McDougle, who was suspended by Toledo this spring and since has been declared academically ineligible. "It opened my eyes to a lot of different things. Basically, keep the people I really trust around me. It's changed my life as far as, I don't know if I'm still going to be able to play football for the University of Toledo. But it's not going to stop me from playing football. I still feel I'm good enough to make it to the next level either way it goes."

Did he, ESPN.com asked, suspect friends or teammates of shaving points? 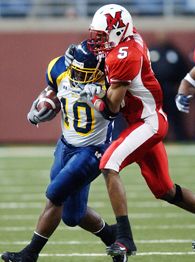 "Every time I ever played, I always played to the best," McDougle said. "That's how I always did. For the team, I always thought everybody was giving 110 percent. So I never felt that way."

What about allegations that Toledo basketball players were also recruited to shave points?

"I don't even know any basketball players," he said.

But they believe he did, right?

"That is what they are thinking."

A government source confirmed to ESPN.com that the probe into Toledo athletics isn't limited to football, saying investigators are also looking at basketball players. A former Toledo basketball star, Keith Triplett, told ESPN.com that his attorney has been contacted by the FBI as part of the investigation. Triplett refused to detail the discussions or identify his attorney, but he said he knows Manni, who is known to players as "Gary."

Triplett said, as did McDougle, that he was introduced to Manni by a friend, whom he declined to identify.

Although college basketball has been tarnished by a number of point-shaving scandals dating to the 1950s -- Toledo, in fact, was involved in an early scandal when a mob associate was arrested in 1951 for allegedly bribing four of its basketball players -- authorities familiar with government investigations believe the current case to be among the very few in which college football players have been suspected of illegally influencing games in which they played.

Authorities declined to name the players they are investigating.

In the meantime, back on campus, the football team has been preparing for the 2007 season without McDougle's participation. His effectiveness as a college player had spiraled precipitously downward -- and thus, presumably, his ability to directly influence games -- ever since he tore up a knee fighting to stay in bounds and run out the clock in Toledo's 35-27 victory in the Mid-American Conference title game against Miami (Ohio) on Dec. 2, 2004. Last season, with McDougle out of shape and tipping the scales just shy of 250 pounds, Toledo coaches called his number for only eight carries.

Toledo, then, is the first destination on the journey through ESPN.com's examination of the case.

Toledo, Ohio
Just a five-minute walk from the University of Toledo campus, on Avondale Street, sits a small brick house that McDougle called home last football season. Since he moved out, according to the house's owner, Rick Ross, the place has been cleaned up, the walls patched and painted. New carpet covers the first floor. But in December, the place was "disgusting," Ross said.

"There was dog poop everywhere, carpeting ripped up," said Ross as he showed the house to ESPN.com reporters recently. "There were some issues with dog breeding and diseases with dogs, and now I'm just finding out I got dogs buried in my yard."

Neighbors told ESPN.com that three pit bulls had been kept on the property, and they sometimes were left tied to a tree. It isn't clear who owned the dogs.

Ross, whose company owns nearly 100 rental properties close to the Toledo campus, said he evicted McDougle and three other Toledo athletes from the house in January. That is shortly after McDougle was first approached by the FBI. At the time, Ross said, the Toledo athletes were also about $3,500 behind in rent. Ross said some of the players made payments once the football coaching staff got word they were in arrears, though he can't recall McDougle paying his share.

Ross wouldn't identify the three Toledo athletes who shared the house with McDougle. Nor would he elaborate on his contact with Toledo's football staff about the overdue rent. But he described McDougle as a friendly, look-you-in-the-eye kind of guy, despite his experience with the player as a tenant.

That's a commonly heard theme. No one contacted by ESPN.com labeled McDougle a bad character. His friends and acquaintances generally are surprised he's entangled in the federal gambling investigation. In fact, according to McDougle's attorney, Scooter fails to grasp even the basics of a betting line.

"He either doesn't understand it or he is a Shakespearean actor of the highest order,'' said James Burdick, who was appointed by the court to handle McDougle's case. "I was asking him some rudimentary questions. He doesn't understand how the line works, the plus or minuses. Does he gamble $5 or $10 at a time on the roulette table or craps table? I'm sure he has. Everybody does that. Nothing illegal with that. But nobody gave him money to bet with."

"He helped [the government] as much as he could, but he doesn't know anything,'' he said. "He never bet. He never gambled with the guy or anything. He never knew this guy gambled or anything.

"My thing is, why aren't they going after [Manni]? He is the gambler. Why aren't they questioning him? Why is everything centered around Scooter?"

The original criminal complaint specified that Manni, McDougle and others bribed Toledo athletes, both football and basketball players, to influence the final scores of games so that Manni and other gamblers could ensure winning bets with illegal sports bookmakers. According to the complaint, McDougle told FBI agents that he received a car, a phone and other items of value from Manni.

Asked whether the account of gifts is true, McDougle told ESPN.com: "Right. I mean, I'd rather not say to that."

McDougle paused, then added: "The things they say he gave me, I don't have. I don't have a car. My phone is in my name. I pay my own phone bill."

Lawrence Burns, a University of Toledo spokesman, said there is no record of McDougle registering a vehicle on campus in any of the past three years. McDougle's father said his son typically gets rides from his girlfriend, a runner on the Toledo track team.