KENNESAW, Ga. -- Just before high noon, sun scorching down so intensely that it softens the asphalt, a sweet, white and black '66 Caddy Sedan de Ville rolls up to within a few yards of the Golden Corral, a buffet joint. Out steps an old egotistical, narcissistic heel clad in khaki pants, a plaid cotton shirt and sandals.

In a matter of moments, Lex Luger abruptly breaks into wrestling character, a cocksure grin on his tanned face. He tilts his head and rolls his eyes up to the blue heavens. He pushes up his right sleeve to flex his ripped, ham-bone-sized bicep.

Then, just as suddenly, the shtick ends. With metal cane in hand, Luger hobbles off to lunch. 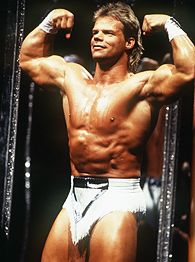 For the next couple hours, between trips to the chow line and chats with the folks who wander by his table, the 49-year-old Luger spins his horror stories about Lex as a younger man. That Lex dabbled in so many prescription narcotics, recreational drugs, cocktails and steroids, Luger says, that it's a wonder he hasn't joined the growing list of dead-before-their-time pro wrestlers, which unofficially numbers more than 100 over the past decade.

In a quiet moment he recalls sitting helpless in the wee hours as his girlfriend, wrestling personality Miss Elizabeth, died four years ago in the townhouse they shared. The cause, according to the coroner's report, was "acute toxicity" brought on by a smorgasbord of prescription painkillers and vodka.

"I take a lot of responsibility for that -- my influence in her life," he says. "Her little heart and body couldn't take what I was doing."

Later on the day Miss Elizabeth died, police found more than 1,000 illegal pills during a search of their suburban Atlanta townhouse. Eventually, Luger was charged with 13 counts of felony drug possession, for which he received probation as a first offender. He later went to jail for a parole violation in 2006, which is when he came across prison chaplain Steve Baskin, whom he credits with helping turn his life around.

The new Lex, a born-again Christian, eagerly shares what he calls "confessions of a drug abuser." He is down-to-earth and contrite, even as he occasionally reverts to the larger-than-life character who won multiple championship belts and was one of professional wrestling's headliners in his heyday. He rails now against the dangers of drug abuse -- the pill-popping, the steroids, the recreational substances.