LAS VEGAS -- Police arrested O.J. Simpson on Sunday, saying
he was part of an armed group who burst into a Las Vegas hotel room
and snatched memorabilia that documented his own sports career,
long ago eclipsed by scandal.

The arrest starts a new legal odyssey for the fallen football
star who more than a decade ago was acquitted of the slayings of
his ex-wife and a friend, and opens the possibility he could spend
decades behind bars.

Simpson was taken away from The Palms casino-hotel by
plainclothes officers a day after the arrest of a golfing buddy who
police say accompanied him with a gun in the Thursday night holdup.
Handcuffed and wearing a golf shirt and jeans, Simpson was placed
in an SUV. He was later ordered by a judge to be held without bail,
police said.

"He was very cooperative, there were no issues," Capt. James
Dillon said.

Simpson was at the Clark County Detention Center on Sunday night
for booking on two counts of robbery with a deadly weapon, two
counts of assault with a deadly weapon, conspiracy to commit a
crime and burglary with a firearm, police said. The district
attorney, meanwhile, said he expected Simpson to ultimately be
charged with seven felonies and one gross misdemeanor. 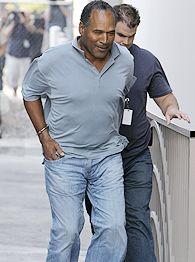 A judge ordered Simpson be held without bail, said Sgt. John Loretto. A court date was set for Thursday, when he likely will be arraigned and officially charged.

"We believe it is an extremely defensible case based on
conflicting witness statements, flip-flopping by witnesses and
witnesses making deals with the government to flip," Galanter said.

If convicted of the booking charges, Simpson would face up to 30
years in state prison on each robbery count alone.

Simpson, 60, has said he and other people were retrieving items
that belonged to him. Simpson has said there were no guns involved
and that he went to the room at the casino only to get stolen
mementos that included his Hall of Fame certificate and a picture
of the running back with J. Edgar Hoover.

"I'm O.J. Simpson. How am I going to think that I'm going to rob somebody and get away with it?" Simpson told The Los Angeles Times on Sunday while sitting poolside at the Palms, hours before his booking. "You've got to understand, this ain't somebody going to steal somebody's drugs or something like that. This is somebody going to get his private [belongings] back. That's it. That's not robbery."

Simpson told AP on Saturday that he did not
call the police to help reclaim the items because he has found the
police unresponsive to him ever since his ex-wife, Nicole Brown
Simpson, and her friend, Ron Goldman, were killed in 1994.

"The police, since my trouble, have not worked out for me," he
said, noting that whenever he has called the police, "It just
becomes a story about O.J."

Police did not allege that Simpson personally carried a weapon
in the incident.

"We don't have any information to lead us to believe he was
armed even based on those charges," said police Lt. Clint Nichols.

Police said they seized two firearms involved in the robbery
along with sports memorabilia, mostly signed by Simpson. They also
said they recovered collectible baseballs and Joe Montana cleats at
private residences early Sunday on three search warrants. But
"whether or not the property belonged to Mr. Simpson is a matter
of debate," Nichols said.

"Walter was one of the two subjects who had a gun," Capt.
James Dillon said.

Robert Dennis Rentzer, a Los Angeles lawyer representing
Alexander, said he was able to arrange his client's release from
custody, but wasn't familiar with the allegations.

Police also are seeking four men: Clarence Stewart, 53, of Las
Vegas, Michael McClinton, 49, of Las Vegas, Tom Scotto, whose age
and hometown were not known, and another man who was not
identified.

Simpson, a Heisman Trophy winner, ex-NFL star and actor, lives
near Miami and has been a tabloid staple since his ex-wife and
Goldman were killed. Simpson was acquitted of murder charges, but a
jury later held him liable for the killings in a wrongful death
lawsuit.

Goldman's father, Fred Goldman, welcomed the possibility that
Simpson could go to prison.

"He's believed for years, decades, that he's entitled to do
anything he wants, and the legal system and society has basically
agreed with him," Goldman said. "This time, hopefully, he'll get
what he deserves. He'll get jail time."

Police said Sunday that Simpson asked to speak with his lawyer
before proceeding with an interview, although he spoke several
times with investigators before his arrest. The attorney, Yale
Galanter, said that he was attempting to get Simpson released.

"Obviously we intend to fight these charges vigorously. We
believe it is an extremely defensible case based on conflicting
witness statements, flip-flopping by witnesses and witnesses making
deals with the government to flip," he said.

Simpson said auction house owner Tom Riccio called him several
weeks ago to say some collectors were selling some of his items.
Riccio set up a meeting with collectors under the guise that he had
a private collector interested in buying Simpson's items.

Simpson said he was accompanied by several men he met at a
wedding cocktail party, and they took the collectibles.

"I'm not walking around feeling sad or anything. I've done nothing wrong," Simpson told The Times hours before his booking. "I'm having a great time.

Alfred Beardsley, one of the sports memorabilia collectors who
was in the hotel room, has said he wants the case dropped and that
he's "on O.J.'s side."

Beardsley said he blames the whole thing on Riccio. "If they
don't charge Riccio I will be very upset. That guy lied to O.J. and
got him all pumped up," he said.

Simpson's arrest came just days after the Goldman family
published a book that Simpson had written under the title, "If I
Did It" about how he would have committed the killings of his
ex-wife and Goldman had he actually done it.

After a deal for Simpson to publish it fell through, a federal
bankruptcy judge awarded the book's rights to the Goldman family,
who retitled it "If I Did It: The Confessions of the Killer."

During the weekend, the book was the hottest seller in the country, hitting No. 1 on Amazon.com and Barnes & Noble.com. It has since dropped to No. 2, replaced at No. 1 by Alan Greenspan's new book, " The Age of Turbulence: Adventures in a New World."