Kasparov has been a driving force behind the coalition, which
has united liberals, leftists and nationalists in opposition to
President Vladimir Putin. He received 379 of 498 votes at a
national congress held in Moscow by the Other Russia coalition,
coalition spokeswoman Lyudmila Mamina told The Associated Press. 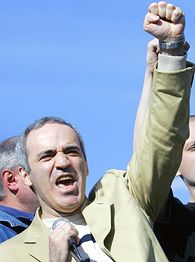 Kasparov's place on the March ballot was not assured. His
candidacy still needs to be registered and is likely to be blocked.

Even if he were allowed to run, Kasparov would not be expected
to pose a major challenge to whichever candidate wins Putin's
backing.

"The goal of the Other Russia is not winning elections, but to
have an election," Kasparov told AP Television News, speaking in
English on the sidelines of the congress. "We're trying to force
the regime to accept our rights to participate in free and fair
elections, to agitate the Russian population and Russian public to
support our ideas."

Kasparov argues that Putin's extraordinary public support hinges
on the Kremlin's full control over the electoral process and
national television.

With all major political decisions in Russia now being made
behind closed doors in the Kremlin, Kasparov stresses the
importance for the Other Russia of following democratic procedures.

In electing Kasparov on Sunday, the coalition chose among six
candidates who had won at least one regional primary in recent
months.

The Other Russia also chose Kasparov to be one of three
candidates to head the coalition's list in parliamentary elections
in December. The others are former Central Bank chairman Viktor
Gerashchenko and Eduard Limonov, a provocative writer who heads the
banned National Bolshevik Party.

The coalition, however, has virtually no chance of participating
in the election for the State Duma, the lower house of parliament.
Only registered political parties can take part and none of the
political movements that make up the Other Russia qualify.

State Duma seats are distributed among parties according to the
percentage of the vote they receive.

In putting forward its candidates on Sunday, the Other Russia
got a jump on United Russia, the main pro-Kremlin party, which
opens its two-day congress on Monday. United Russia also is
expected to pick its "troika" of candidates to head the party
list.

Moscow Mayor Yuri Luzhkov, a leading party member, said Sunday
that Putin could be considered for the top spot. Putin is
constitutionally required to step down when his second term ends
next spring, and uncertainty over his future plans has added to the
current political uneasiness.