It was halftime at the Lake Fenton-Mount Morris game, seemingly just another high school football contest during another homecoming week on another October Friday night in another American suburb.

But this time the fix was in.

Four Lake Fenton (Mich.) football players and a co-conspirator on the golf team arranged it. Seniors all, they'd used their cell phones to hatch and agree on the plan, and then met outside the school building the afternoon before the big homecoming game to nail it down.

Jake Kirk, the ringleader and a Blue Devils' running back, saw the decision differently: "We knew we'd all be winners if we did it."

By game's end, they'd done it. The scoreboard at Lake Fenton Stadium claimed the Blue Devils lost to Mount Morris 37-20, their lone defeat of the season so far.

But scoreboards can lie.

Candidates for the senior royal crown, they each gave up the chance to become Lake Fenton's homecoming king.

They fixed it so Eli Florence won instead.

Eli is a 5-foot-7 former offensive lineman. He's only a sophomore. The doctors say there's nothing more they can do for him. He's at home, barely able to speak, getting regular blood transfusions. Eli Florence, 15, is dying of leukemia.

In these days filled, it seems, with it's-all-about-me athletes and iPod-wearing, text-messaging teenaged zombies, these Lake Fenton High athletes did something special for a special classmate.

"He's taught us never to give up," Kirk said. "And if you keep fighting, you can overcome the odds. We're happy he's still around because he wasn't supposed to be."

That's when Trina Florence-King learned her son was suffering from acute myelogenous leukemia.

That day, her wise little boy boldly consoled her.

"I've got something to tell you," she remembers him saying. "Me and God, we had a heart-to-heart. I told him I was available for whatever he needed."

And Thursday, Trina Florence-King told ESPN.com: "Since then, I've seen him working on other peoples' lives, working on people for four years. I'm not saying this because I'm his mother, but this is a special boy."

From one remission to two cutting-edge stem cell transplants to one stint of 13 straight months in the hospital, from Flint to Ann Arbor to Minneapolis and now back home, Eli Florence traveled and endured.

"Eli has become an icon for strength and perseverance and character for this entire community, and especially our student body," said Lake Fenton principal John Spicko.

But last month, the awful, final, numbing news came. Eli's mom reported it on a Web site set up by friends to monitor Eli's health.

"Tonight I come with a broken heart," she wrote. "Eli has been given just a few weeks to maybe one month to live here on this Earth with us.  This process of 'losing my son' is going to be very soon. When I look at him, even today, it just doesn't seem possible."

The nicest kid in school, the one who's out of class so often, was fading.

Then, it came to Jake Kirk, as crisply and clearly as his two syllable name: Eli should be homecoming king. King Eli.

It felt so right.

On Oct. 4, on his way to school, Kirk got the plan under way. A neighbor had given him an orange ribbon -- orange is the color of leukemia awareness -- and it triggered Kirk's vision.

Kirk phoned Tanneyhill. Tanneyhill was with Hasenfratz. Before Kirk even got the entire concept out of his mouth, "They immediately said, 'Yes!'" Kirk said. Soon after, the other two senior candidates for homecoming king agreed.

Go here to see more photos of Eli Florence and the special night that five Lake Fenton athletes organized to honor him as homecoming king.

By lunchtime, they'd planned their announcement for what was to be the king candidate-selection assembly.

Kirk took the microphone in front of the entire student body of 538 students and said there wouldn't be any vote this year for king.

"We, as the king's court, decide there is nobody in this school who deserves this more than Eli Florence,'' Kirk said. "This year's homecoming king is going to be Eli.''

The entire audience cheered and clapped in unison.

But Eli was too sick to be in school that day.

"The whole school knew, but Eli did not know," said Sticko.

That night, Trina Florence-King received a text message on her cell phone.

Eli would be crowned the next night at halftime of the football game.

She didn't tell her son.

There was a problem. Halftime was approaching and the king-to-be was at a local clinic receiving a necessary blood transfusion, getting energy, getting life. He was scheduled to escort his friend, Ashley Look, a member of the sophomore royal court, to midfield. He didn't have a clue he would be the center of attention.

Barely in the nick of time, Eli, in a wheelchair, and Ashley joined the other members of the court and their parents at midfield, surrounded by the Lake Fenton band, clad in blue and white.

The public-address announcer said: "Your 2007 king, as designated by the five candidates is  is Eli Florence."

The king was stunned. 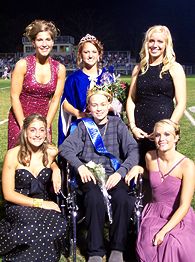 "It's like he heard his name, but it was sort of surreal," his mother said.

The crowd of 2,000 people, including homecoming queen Brooke Hull, 17, stood. Many cried.

The four Blue Devils football players who ceded their kingship opportunity to Eli missed the moment. They were in the locker room trying to make adjustments for the second half to hold off Mount Morris.

Eli's mom brought the telephone to Eli in his bed Thursday morning.

He spoke softly of the five boys who honored him.

"It was definitely a sacrifice to take that step down to let someone else get it, to be homecoming king," he said. "The guys were really sincere. They honestly were OK with it."

Even Spicko, who sees a lot as a high school principal, was taken aback by the action of the Lake Fenton Five.

"There's not much that surprises me, but that did," he said. "We can't lump all kids into the same bucket. We see so much character development in so many kids in so many ways. This was just amazing."

Said Trina Florence-King: "I'm so proud of those boys. They wanted to honor him and make him feel special."

Saturday, Eli has another football date. Through a friend, he's been invited to visit the University of Michigan bench before the Wolverines' game against Purdue.

"It's going to be really cool," Eli said.

It's Michigan's homecoming game, the perfect place for the toughest little homecoming king of this, or any, football season.

ESPN.com correspondent Jay Weiner writes from St. Paul, Minn. He can be reached at jay@jayweiner.com. A Web site has been set up to chronicle Eli's battle. A benefit will be held Sunday to help Eli's family cover medical expenses.