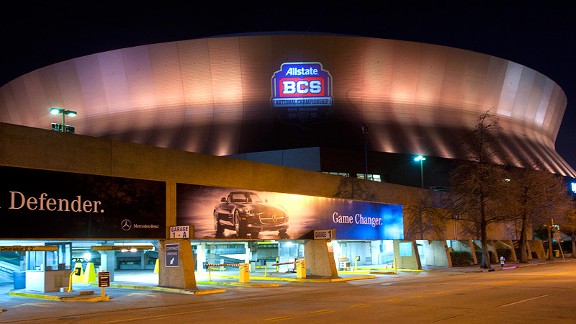 If you dug deep for tickets that are priced at face value between $300 and $350 for the 2012 Allstate BCS National Championship Game, we here at The File thought you might like to see where your money has gone. The Sugar Bowl, after all, is a registered 501(c)(3) charity that doesn't pay taxes on the cash you give it. With net assets in the neighborhood of $34 million, it has a lot of money to spread around.

A quick look at the Sugar Bowl's IRS disclosure form suggests it's very charitable. The filing reports that the organization, which this year directs the Sugar Bowl on Jan. 3 and Monday's title game, gave away $6.21 million in grants in the fiscal year ending June 2010, a princely sum by any standards. But look a little closer, and you'll find that figure is not what it seems.

The first $6 million of that isn't really a grant. It's a payment to the BCS, which distributes the money back to schools. If you believe in less government and more free market economics, this would appear to be a good thing. The BCS is plowing tax-free money back into higher education.

Except that's not really how it works. The money that the bowls send to the BCS is actually used to subsidize the high-priced tickets they force universities to buy.

Consider last year's Sugar Bowl. Arkansas and Ohio State signed game contracts requiring them to buy blocks of 17,500 tickets. At the end of the day, the Razorbacks came up $342,980 short on their unsold tickets while the Buckeyes ended up eating $149,330. Add in expenses, and even though they received $3.9 million in combined payouts from the BCS (via their conferences), Arkansas reported a measly $5,525 profit, while Ohio State made $288,876.

The Sugar Bowl maintains that it needs that ticket money to host its game and related activities. "You name the sport, we're involved in [financing] it," Sugar Bowl spokesman John Sudsbury says.

But go back to that grant figure. Minus its $6 million payment to the BCS, the Sugar Bowl donated just $210,056 to charities in the fiscal year ending June 2010. Its grant recipients included the Southern Yacht Club ($16,500) and the Friends of New Orleans Lacrosse ($12,536).

What's even more interesting is how much the Sugar Bowl spends on itself. According to this document that the Sugar Bowl filed with the state of Louisiana two years ago, it's projected operating budget for 2009-10 was $5.6 million, roughly the same amount it sent to the BCS.

The figure that stands out most is $1.1 million. That's the amount that went to pay the salary of its chief executive, Paul Hoolahan ($593,718), and two top aides. 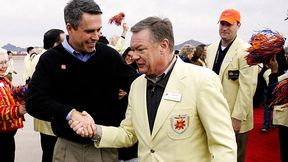 Looked at another way, 20 percent of an operating budget that was almost as large as the Sugar Bowl's total BCS payout went to three people. Hoolahan made twice as much as Ohio State.

How good is Hoolahan at what he does? In addition to pocketing more than the top three executives of the Rose Bowl, he persuaded the state of Louisiana to give his bowl $1.4 million for its 2010 game. While he had to promise that the money wouldn't be used for staff salaries, the Sugar Bowl used it to help cover its BCS disbursement, which, as we've seen, at least partially went to paying for the tickets that finance his salary.

Hoolahan isn't the only one making out like a bandit. In Miami, Orange Bowl CEO Eric Poms banked $507,000 in the fiscal year ending June 2010, and that doesn't include perks like having an off-duty Florida Highway Patrol officer shuttle him around.

How did these guys get so rich and powerful without anyone knowing their names? Like good party hosts, they fly under the radar while making sure everyone had a drink in their hand. The Orange Bowl holds cruises for athletic directors and conference execs. The Sugar Bowl holds parties.

But in Phoenix, the Fiesta Bowl's former CEO John Junker may have gotten a little greedy. He is accused of reimbursing employees for donations they made to political candidates who could keep the gravy train rolling. A series of articles by Craig Harris of The Arizona Republic exposed that and more: lavish parties, bloated salaries and, inevitably, strip club bills.

The feds are looking into the deposed Junker's reign, his former chief operating officer is under indictment, and a lobbying group known as Playoff PAC is asking the IRS to look at all of the bowls, alleging a pattern of frivolous spending, undisclosed lobbying payments and bloated salaries.

Where is this heading? Maybe to the worst four-letter word a bowl chief can hear: UBIT.

It stands for "unrelated business income tax." Here's why it matters: Nonprofits get a free pass on income related to their charitable missions, but anything outside that mission is subject to being taxed. The Orange, Sugar and Rose bowls claimed exactly zero in UBIT revenue in their fiscal year 2010 filings. The Fiesta Bowl reported $3,054.

Marcus Owens, a former high-ranking IRS official who ran its Exempt Organizations Division, says unrelated business income "has always been a playground for tax lawyers." It appears to him that the bowls have gone too far in writing off advertising and sponsorship revenues. He is advising Playoff PAC, which plans to file a complaint with the IRS later this month alleging the BCS bowls serially under report taxable income.

Granted, it's hard to get worked up about corporate business taxes, but this is one investigation that the bowl chiefs really don't want. According to Owens, the NCAA litigated the issue in the 1990s and came away with a federal court ruling that the organization didn't have to pay taxes on income such as advertising in once-a-year game programs. But the business of college sports is much bigger now, and Owens says the IRS may be tempted to take another look.

Enjoy the game. To the people running it, it might as well be called the UBIT Bowl.