U.N. report: All that glitters is not gold

That may be the most startling detail in a story full of them about future NBA Hall of Famer and humanitarian Dikembe Mutombo.

While Mutombo was asking the U.S. Department of State to help him stop the illegal export of "conflict minerals" from his native Congo in late 2010, he also was allegedly giving a secret PowerPoint presentation to a Houston oilman to show how easy it would be to smuggle $10 million in gold from the country.

The story is spelled out in this report from the United Nations, which was first reported by the Houston Chronicle last week.

It's a 400-page report that, along with alleging cynicism and greed, describes how armed militias are looting the struggling country. But there's nothing quite as cynical and greedy as the scene that U.N. investigators paint of Mutombo trying to interest the oilman in the scheme.

The PowerPoint slides were made by Mutombo's nephews, David and Stephan Kapuadi, for a Houston oilman of Nigerian descent named Kase Lawal. According to the U.N. report, they wanted to convince Lawal to use his company's offices in Nigeria to finance the gold purchase in exchange for a third of the profits.

One of the slides is illustrated with a stack of gold bars and notes, "Using the highest discretion and confidentiality is a priority."

Lawal saw the presentation at a New York hotel on Dec. 3, 2010 that was attended by Mutombo, the Kapuadi brothers, and a third nephew, Reagan Mutombo. The report claims they had 1,045 pounds of gold ready to smuggled out of the country. Also at the table was the owner of a diamond trading company, Carlos St. Mary, who subsequently confirmed many of the details to the U.N.

The meeting ended with Lawal agreeing to finance the operation, the report states.

What followed, according to the report, was an almost Keystone Kops series of events involving a crooked general, mysterious manifests and enough material for three "Hangover" screenplays.

An example: "Subsequently, in Nigeria, on instructions from Kase Lawal … [his brother] prepared two separate bags containing the remaining amount of currency and joined St. Mary and [a] security agent … on a leased Gulfstream jet for a flight from Abuja to Goma on 3 February. The Nigerian Government provided the Group with passenger manifests confirming this flight. With Reagan Mutombo already in Goma to oversee Dikembe Mutombo's share in the deal, the passengers arrived and were brought to meet Ntaganda at Hotel Ihusi." 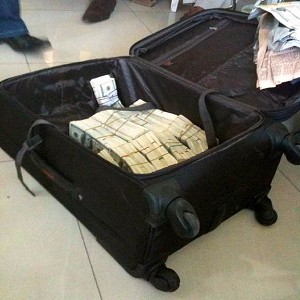 Courtesy of United NationsMore than $3 million in cash was seized as evidence.

That last character is Gen. Bosco Ntaganda, an accused warlord known as "The Terminator."

We could go through the whole crazy story for you, but why ruin the fun? All you need to know is that it ends with the general and his chief intelligence officer counting a suitcase full of $3.1 million in U.S. bills, a fire truck being driven in front of Lawal's jet to stop it from taking off, and all of the passengers inside being taken into custody for illegal possession of minerals.

Gen. Ntaganda was apparently shocked -- shocked! -- to find gold smuggling going on in his country.

You might feel bad for Mutombo, who has declined to answer questions about the episode, if the other 388 pages of the report didn't show the tragic cost that schemes like this are wreaking on the country.

Alberto Contador: Having spent so long covering doping, we're always interested when the big institutions throw dirt at each other. That came to light last week in the case of cyclist Alberto Contador, when a World Anti-Doping Agency official was accused of throwing a hissy fit during a hearing into his case. Last February, the Spanish Cycling Federation cleared the three-time world champion of doping, even though he tested positive the prior year for clenbuterol. Instead of letting it end there, WADA appealed the decision to CAS, the Swiss-based Supreme Court for doping cases. That angered cycling's governing body, the UCI, which has tussled with WADA over cycling cases in the past. On. Jan 11, The Associated Press wrote that WADA lawyers threatened to walk out of a CAS hearing in November when judges refused to let them call an expert witness who was slated to give speculative testimony. UCI officials denied that they had anything to with the embarrassing leak. But tempers in the case are clearly running high.

Stem cells: On Sunday, I reported a piece on "Outside the Lines" about athletes who are going offshore to have their stem cells extracted and re-injected into damaged joints. The reason they are going offshore is that federal Food & Drug Administration rules forbid U.S. doctors from performing the therapy. The FDA has been in a long-running battle with the doctor who was profiled, Chris Centeno of Regenerative Sciences of Colorado. But as a blog shows, the agency is broadening its attacks. The next time a doctor tells you he can extract your stem cells on U.S. soil, show him this link.

Facebook defaces: So much for using Facebook to ID the rioters who tore up Vancouver after the Canucks lost Game 7 of the Stanley Cup finals. Since police were able to identify only 30 of the hundreds of rioters through social media sites, they went to court to get The Vancouver Sun and the Province newspapers to hand over more than 5,000 photos taken that day. The papers weren't happy about it, but they made a crafty call by publishing the photos before the cops could see them. If you were in the crowd, see if you recognize yourself at pngphoto.com.